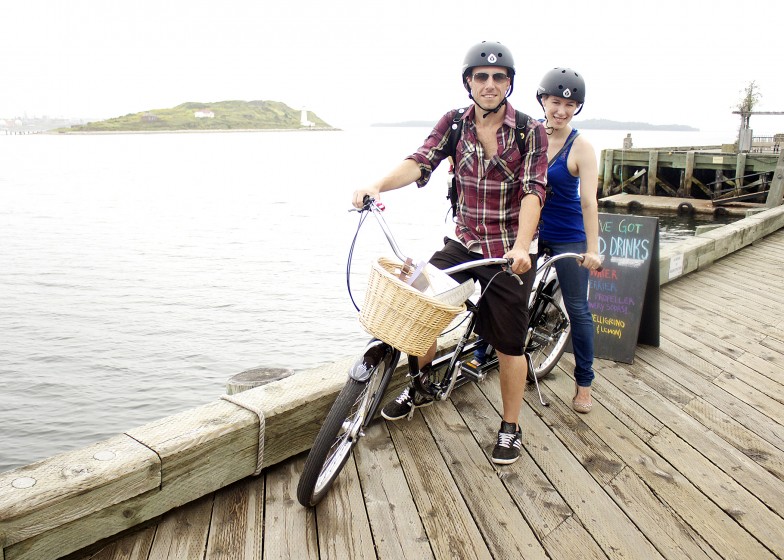 Grab your bike (or rent one) and take a DIY history tour through downtown Halifax!

You may have noticed stylish pale teal bicycles roaming around town over the summer. They belong to I Heart Bikes (@IHeartBikesHFX), a bike rental company based on the Halifax Waterfront. They have many bikes of different sizes for families with children, and tandem bikes for couples or friends.

Neither of us had ever ridden a tandem bike before, and Gillian is still nervous about cycling downtown, but we were feeling adventurous. We took the two-seater out for a tour of all the free heritage sites you can reach downtown by the safest cycling route possible. We got a lot of funny looks, had a lot of laughs, tested our communication skills and learned more about our city!

Note: Some sites have an admission fee to enter, but it costs nothing to stop at them. 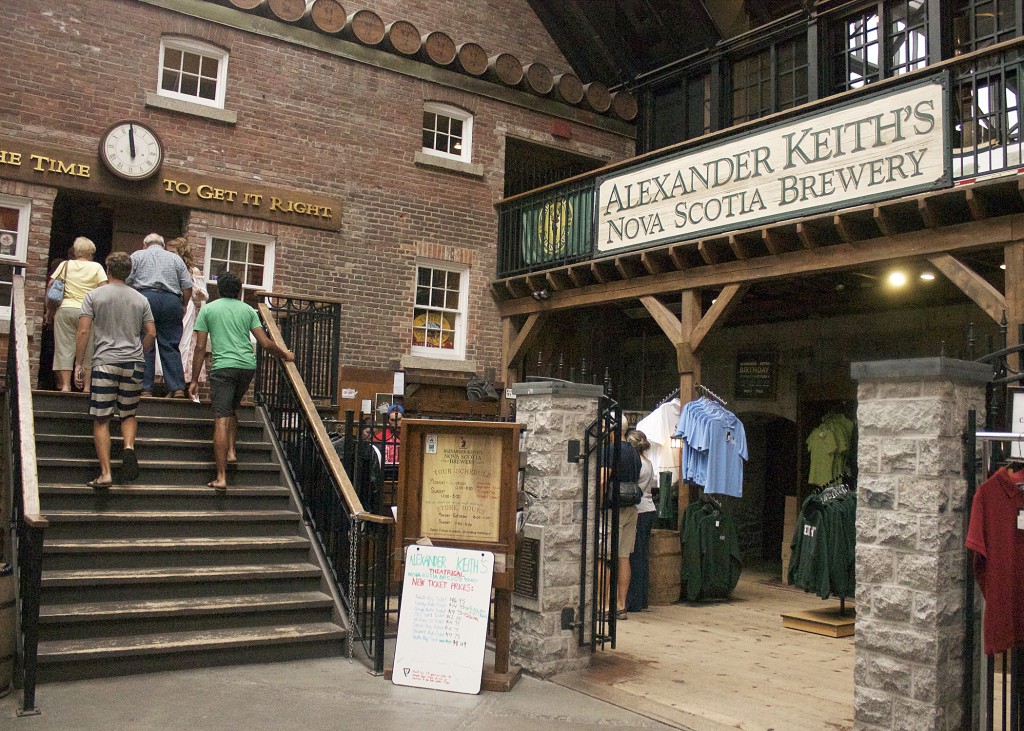 The true home of Alexander Keith and his brewery, the market will transport you back in time to 1863.  Here you will be guided through the stories, sights and tastes of Nova Scotia’s first brewmaster. 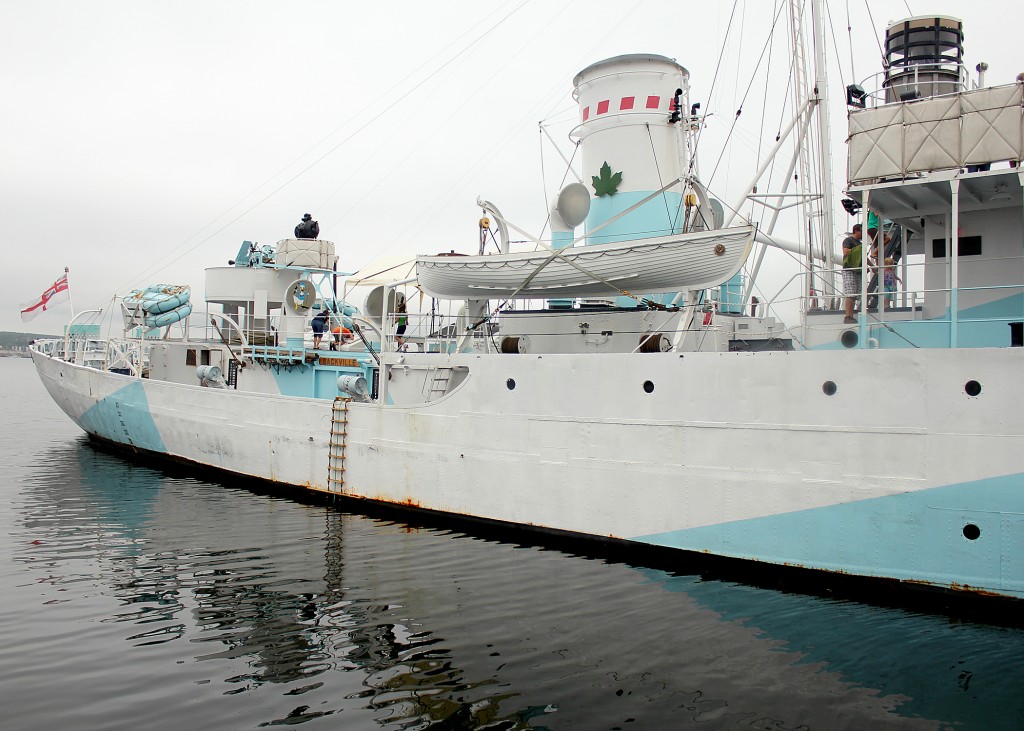 HMCS Sackville
Continue a block along the bike lane on Lower Water Street until you reach Sackville Landing.  Watch for the statue of the sailor carrying his kit on your right where you will turn onto the waterfront boardwalk to find a couple floating museums. Halifax was one of the major ports for the Allied Powers in the Second World War.  Convoys of ships heading to Britain would form here and sail across the Atlantic with their escorts. The Sackville was one of those escort vessels.  Today she is fully restored and serves as a museum to remember Canada’s naval veterans. 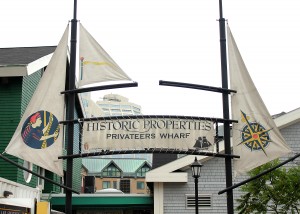 Historic Properties
If it is a slower day on the waterfront (see:few people to run over) keep heading down along the boardwalk another 400m, just past the Halifax Ferry Terminal.  If it is busy, turn left and take the street until you hit the large Historic Properties sign on your right. This boutique shopping and dining area is housed in three blocks of restored heritage buildings.  Constructed around the turn of the 19th century, it is very easy to let yourself step back in time as you wander these heritage buildings. 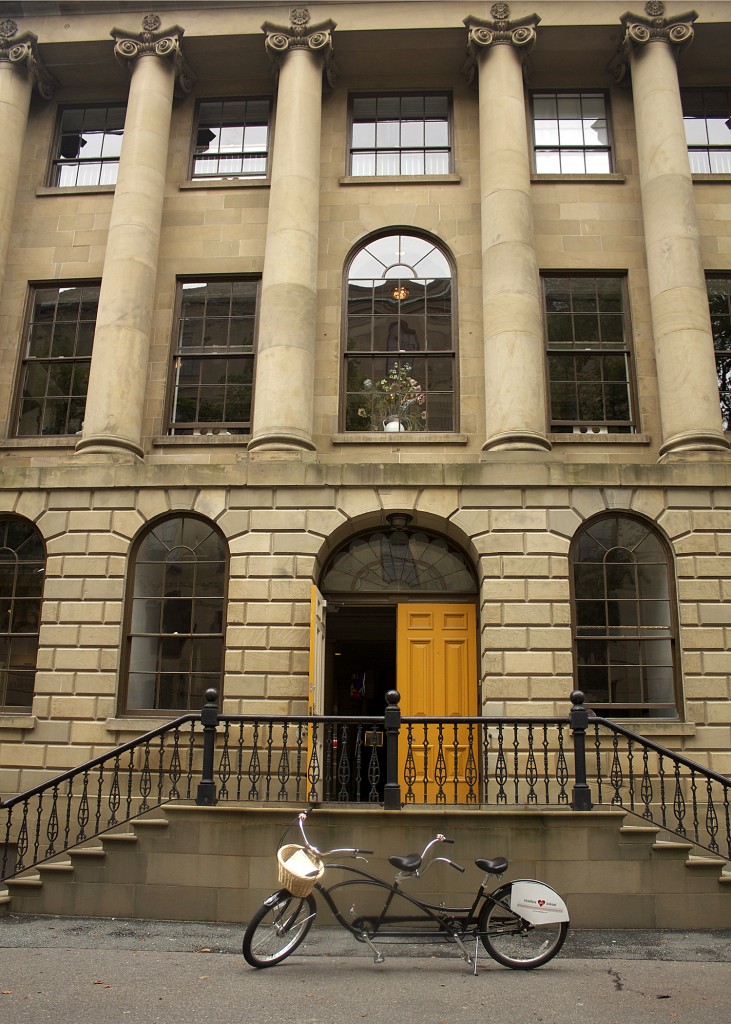 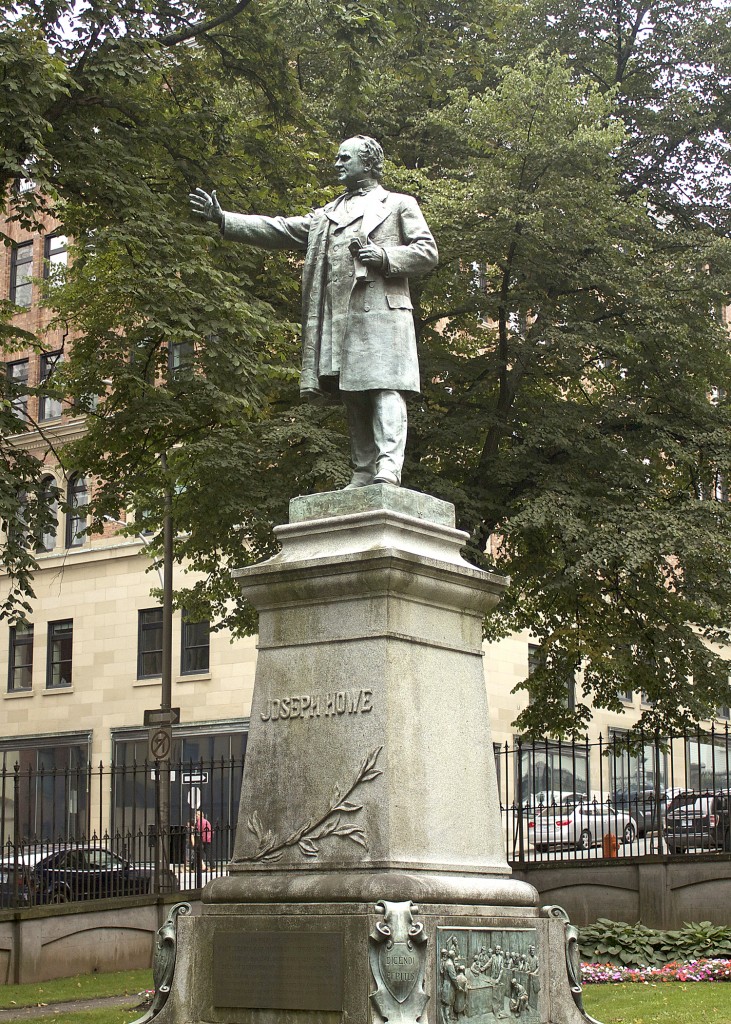 Province House
From Historic Properties, backtrack one block and then turn right up Duke and then immediately left onto Hollis street.  Both of these are one way streets so traffic won’t be too bad. Province House was home of Canada’s first Responsible Government, and is the home of a museum dedicated to Joseph Howe, Nova Scotia’s famed orator, newspaperman and advocate for Responsible Government.  You can see a statue of the esteemed citizen outside the building. 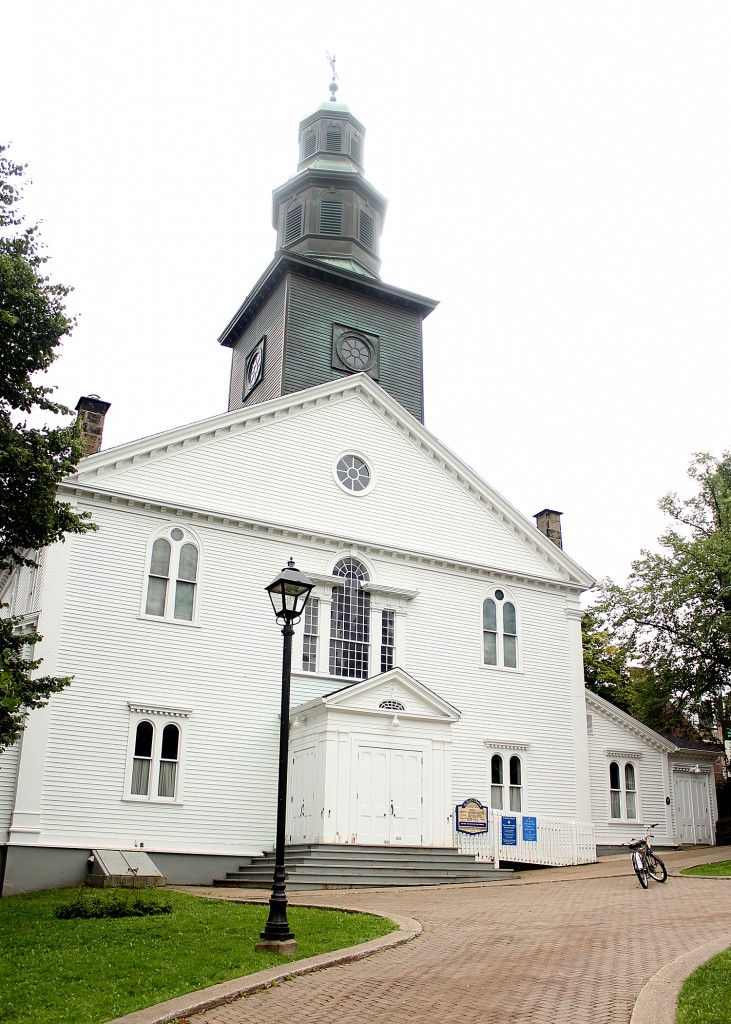 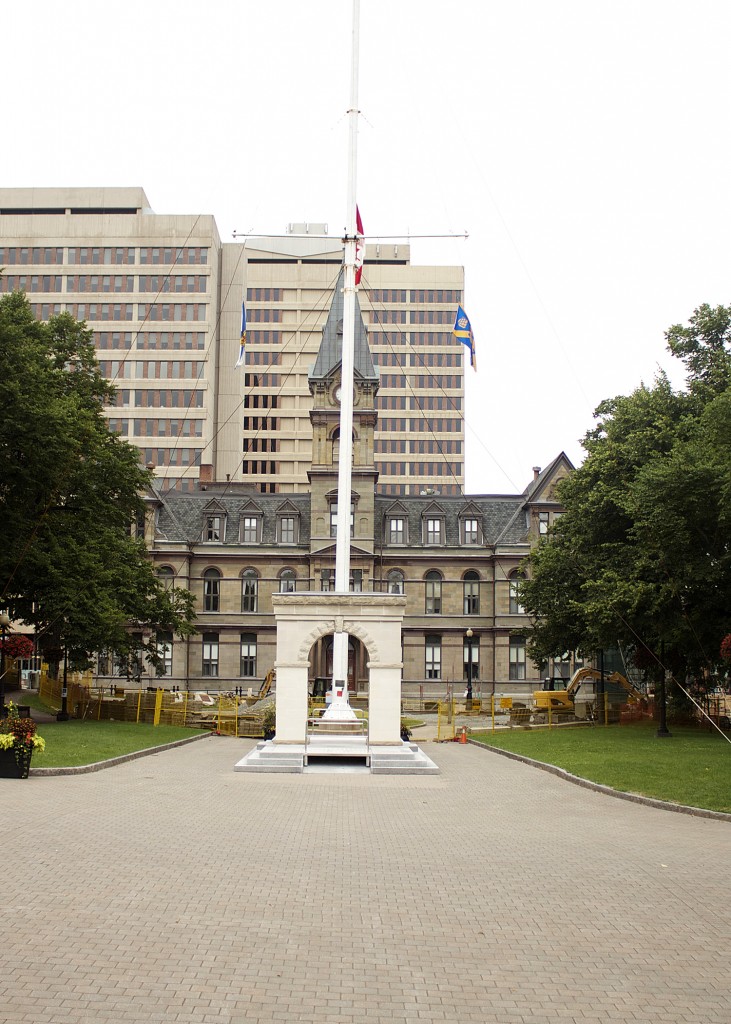 Grand Parade: St. Paul’s Church & City Hall
Turn right up one way Prince Street and then right again on Barrington Street.  Prince will be your first battle against Halifax’s hilly downtown, and could prove difficult on the tandem.  Might be better to walk the 200m to get here. Halifax’s City Hall is at the north end of Grand Parade, a military parade ground for centuries that is today often used for concerts, rallies and the annual Christmas Tree lighting.

The building to your right that houses City Hall itself was the original campus of Dalhousie University, and is over 100 years old.  Opposite is Halifax’s oldest standing church, St. Paul’s, which has a supernatural window on its Argyle Street side. 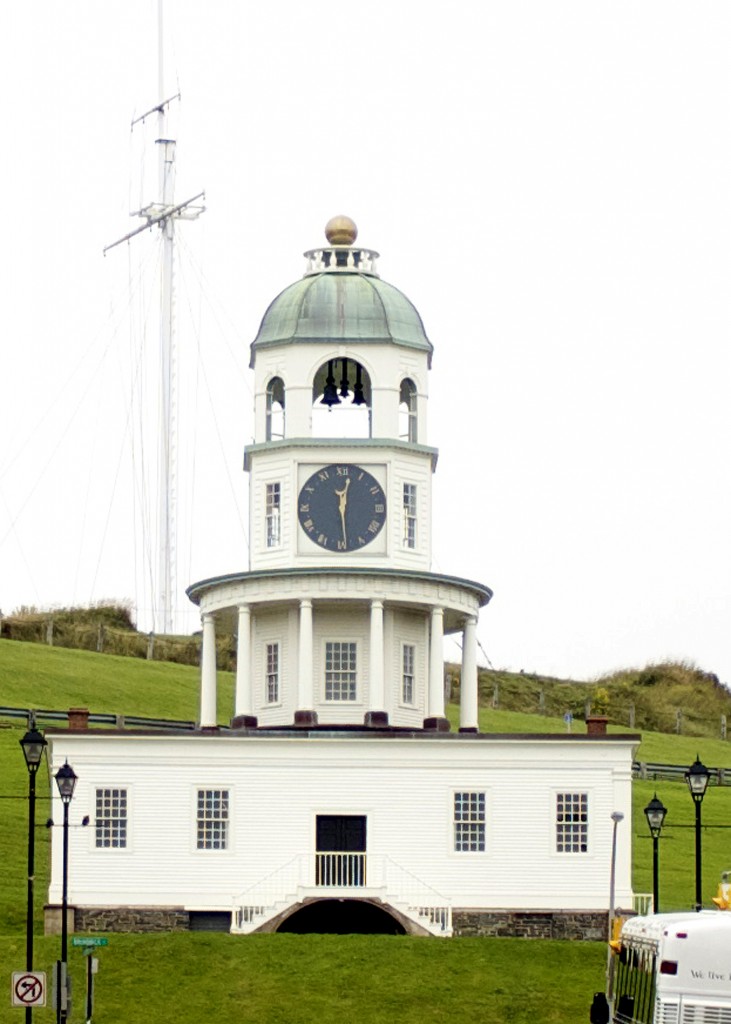 Old Town Clock
From the middle of Grand Parade, head up the steps and go straight up Carmichael Street to the Old Town Clock in front of you.  This iconic edifice has been overlooking the harbour and keeping Haligonians on time since 1803. 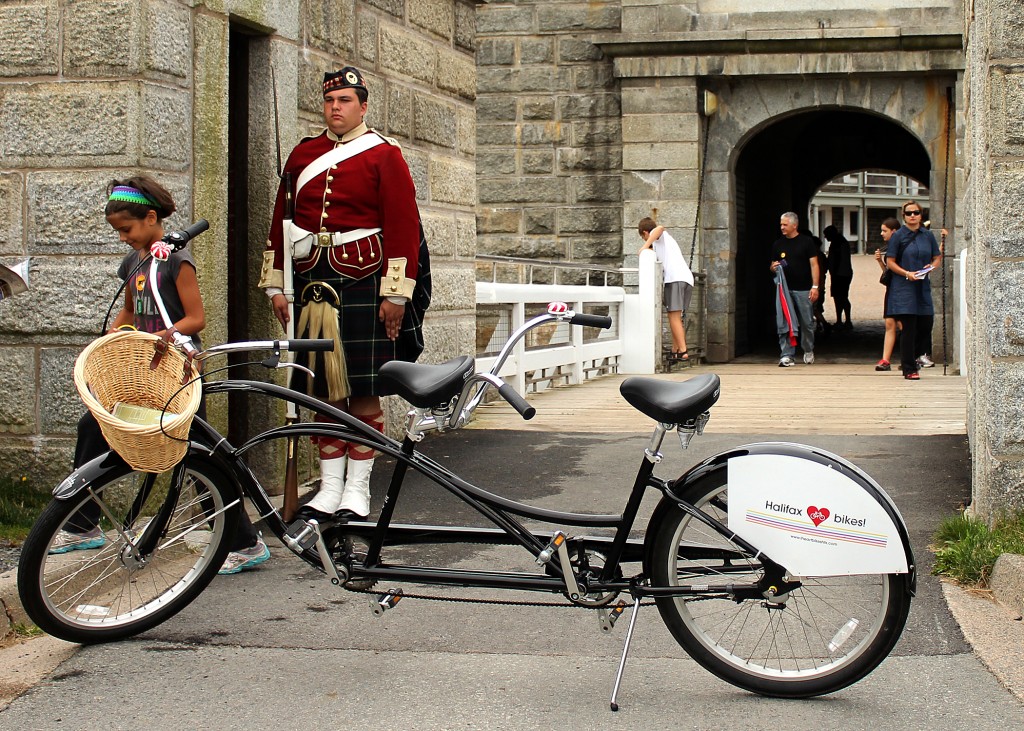 Citadel Hill
From the Clock Tower, follow the bike lane south to Sackville Street, turn right and then turn up the hill. The crown of the British defensive network around Halifax Harbour, Fort George on Citadel Hill was well-designed, but never saw action. From the top of Citadel Hill visitors have a great view of the harbour. You can read a visitor’s view of Citadel Hill here. 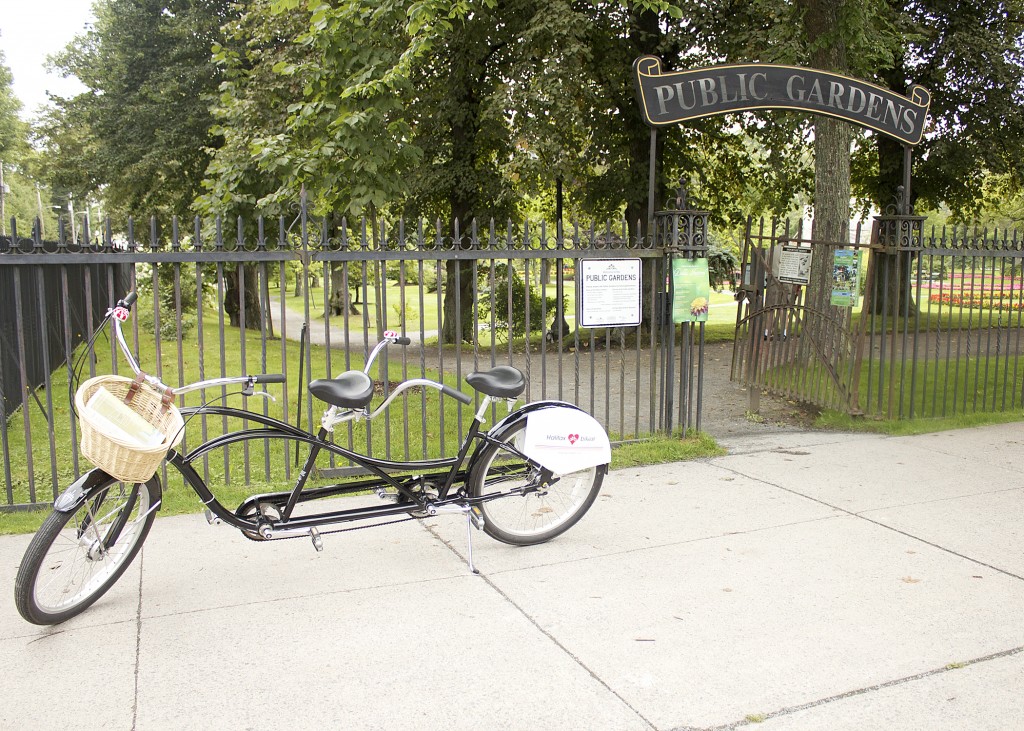 Public Gardens
Cruise down the north slope of Citadel Hill toward the Common and take the exit on your right to turn left onto Cogswell St.  To newcomers (and to many Haligonians) this intersection presents no shortage of stress.  However, just be alert and pay attention to the lights and you’ll be fine.

Stay in the left lane so you can turn left onto Trollope St., then cross Bell Rd. to turn onto Summer St. where you will find the Public Gardens.

The Public Gardens are Halifax’s ode to the Victorian Era, a downtown greenspace for lovers, friends and families to stroll through while admiring the flowers, the birds in the pond or take in a concert at the Gazebo. Note that bicycles are not allowed in here, so lock the bike up inside and enjoy stretching your legs. 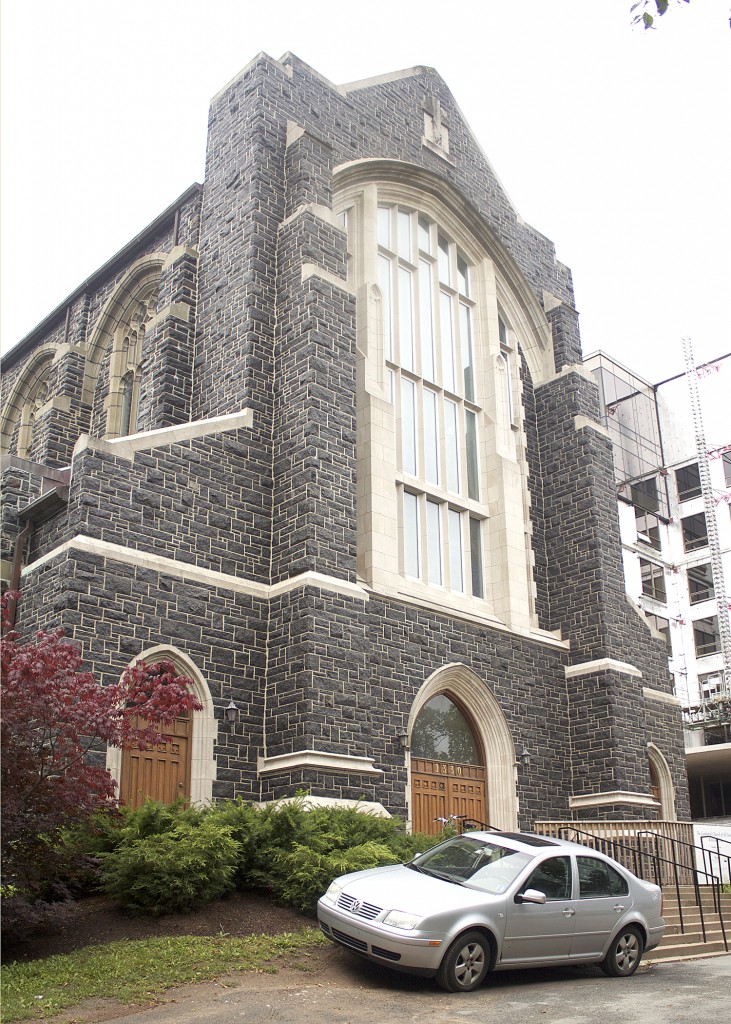 All Saints Cathedral Church
Once you’ve strolled through the Gardens, retrieve your bike and take Sackville Street until you turn right onto the bike lane on South Park.  Once you cross Spring Garden Road, turn into Victoria Park to see the statue of Robbie Burns.  At the south end of Victoria Park you will find the Cathedral Church of All Saints on your right.  Built in the Gothic style, be sure to take note of its stained glass and wood carvings. 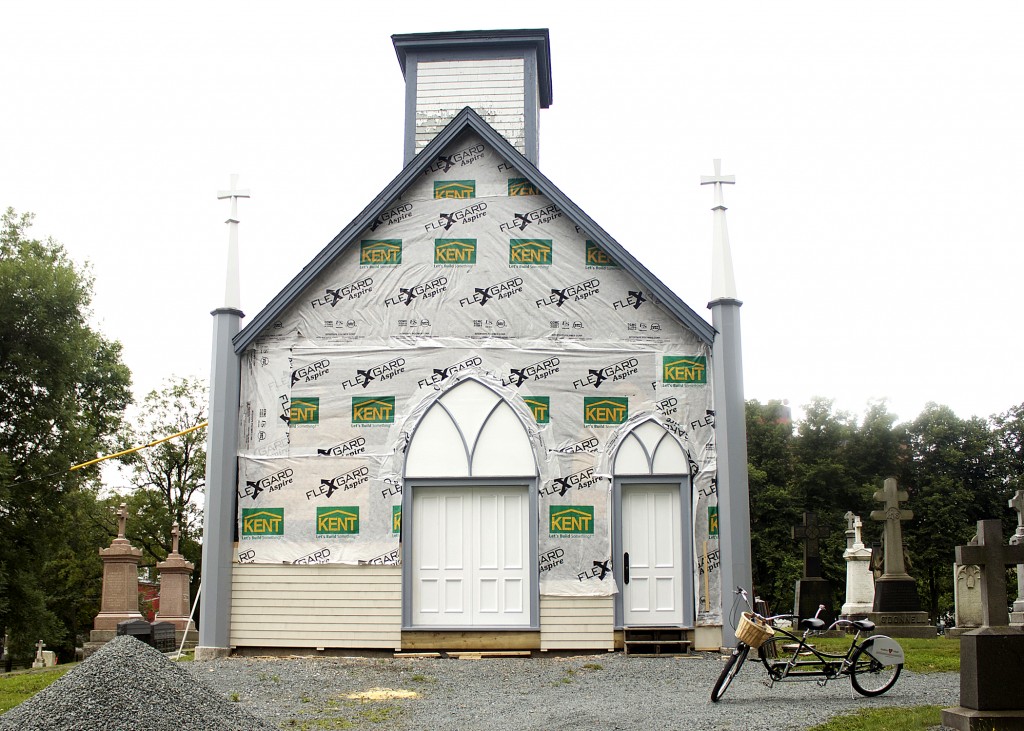 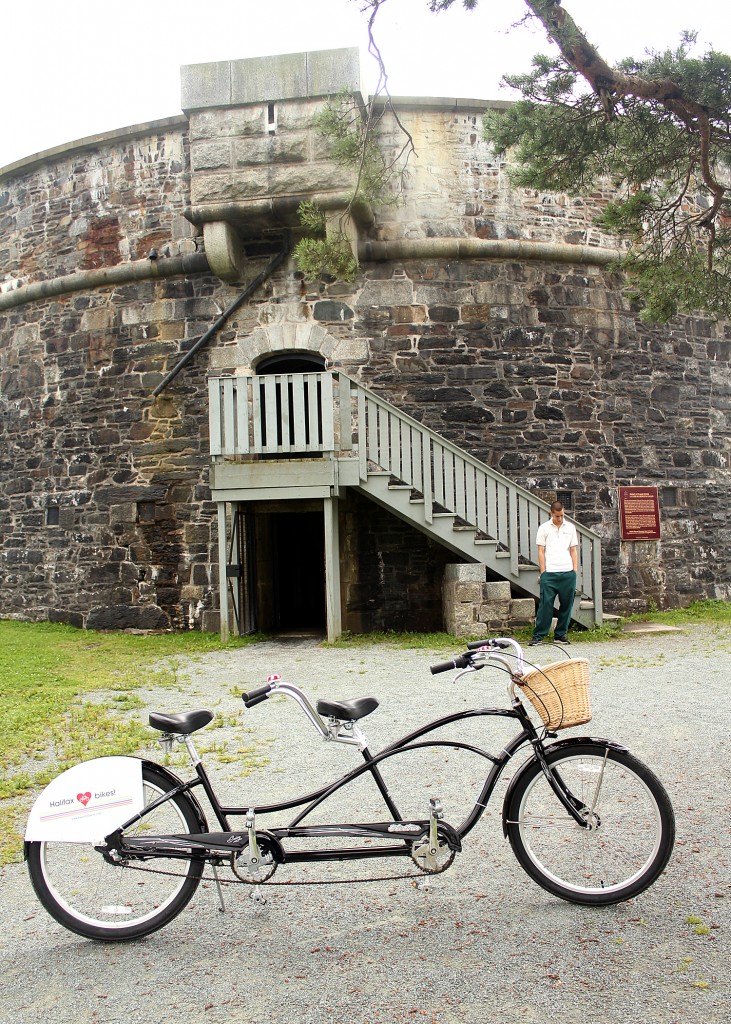 Prince of Wales Tower National Historic Site
Get back onto South Park Street and go left (south).  This will become Young Av. and take you straight to Point Pleasant Park.  At the end of the street cross to the park entrance and head up the slope to the main park road on the right. Watch out for off-leash dogs and continue until you get to the path on your right that leads to the Prince of Wales Tower.

During the summer there is a parks Canada guide stationed here who can tell you that the tower was built in 1796, making it the first Martello tower in North America.  Along with the Citadel and York Redoubt, it was built to protect Halifax from French invasion. 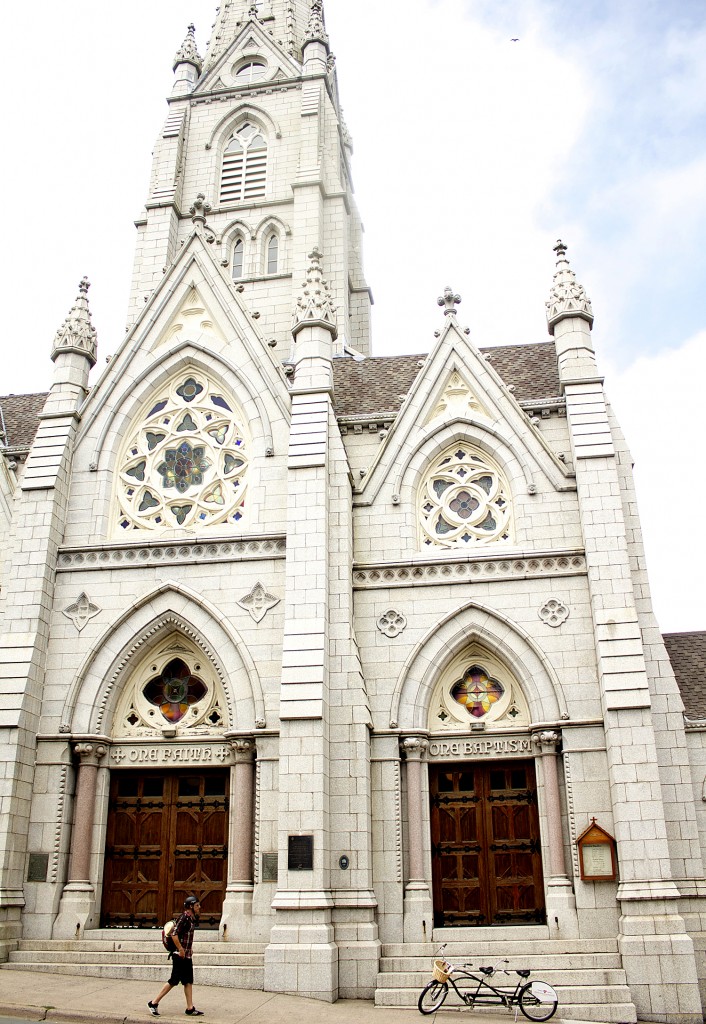 St. Mary’s Cathedral Basilica
From the tower, you’re going to get a chance to give your tandem bike its head (Drew’s been reading a lot of cavalry books lately) as you return along young & South Park until you turn right on Morris St.  Then turn left onto Queen and right onto Spring Garden Road.  None of these roads have bike lanes, but they are wide so there is ample room for cars and bikes to share the road.

You can’t miss St. Mary’s Basilica on your left, as it has the tallest polished granite spire in North America.  Next to the basilica you will find the original campus of St. Mary’s University. 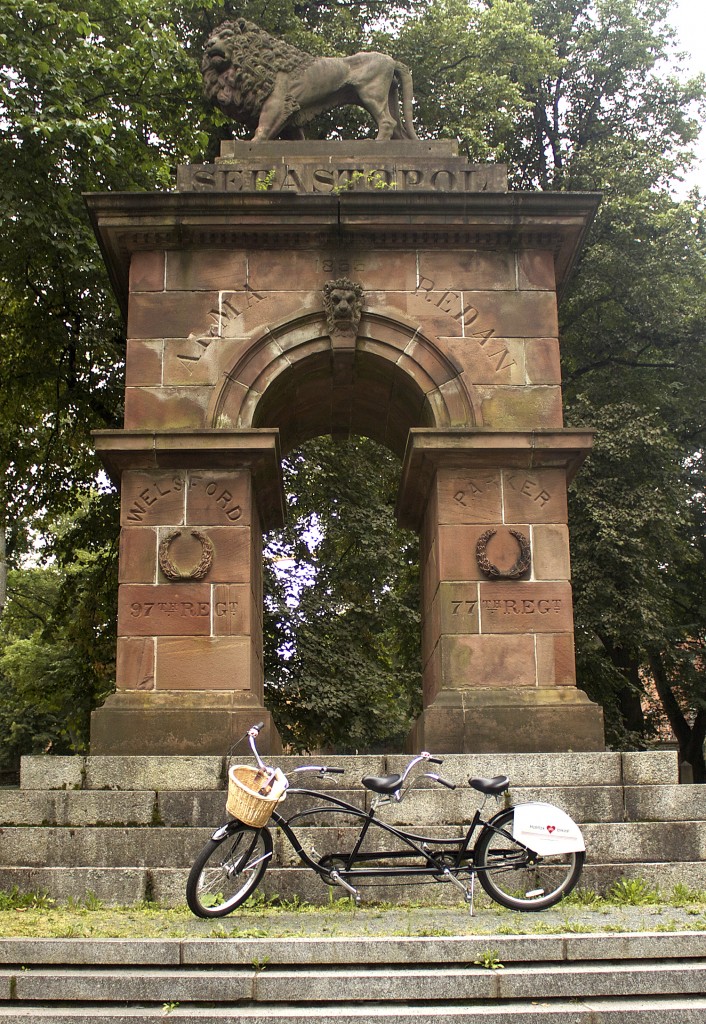 The Old Burying Ground
Walk your bike across Spring Garden Road to the city’s oldest graveyard, aptly named the Old Burying Ground.  The first grave was dug the day after the English first arrived here in 1749.  Interpretive signs will offer more tidbits on who’s been buried here. 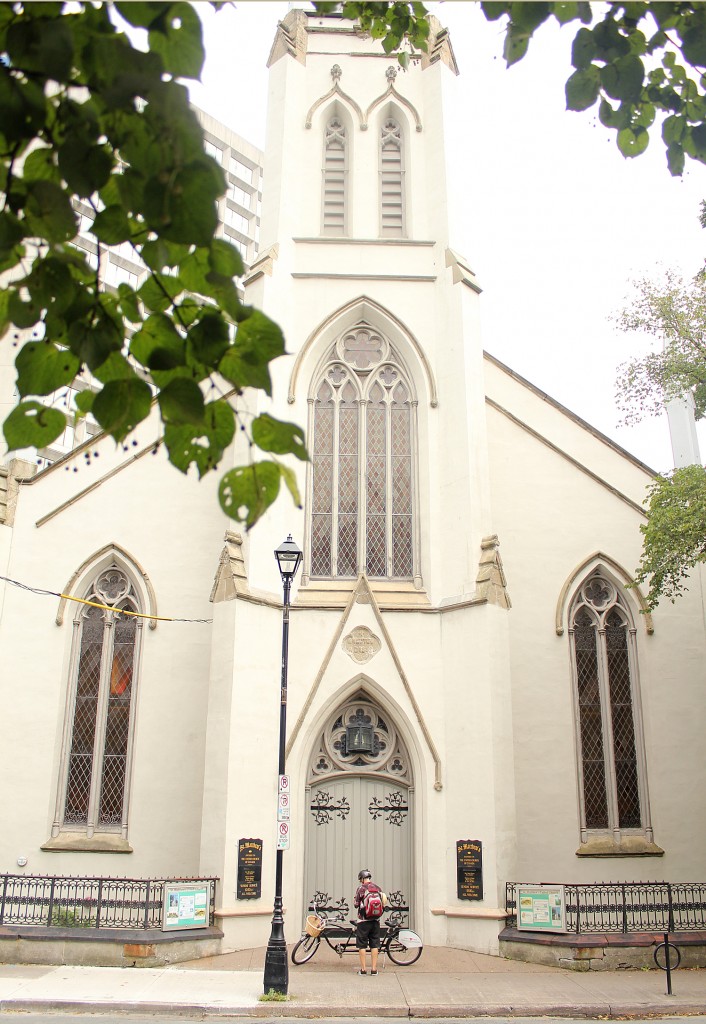 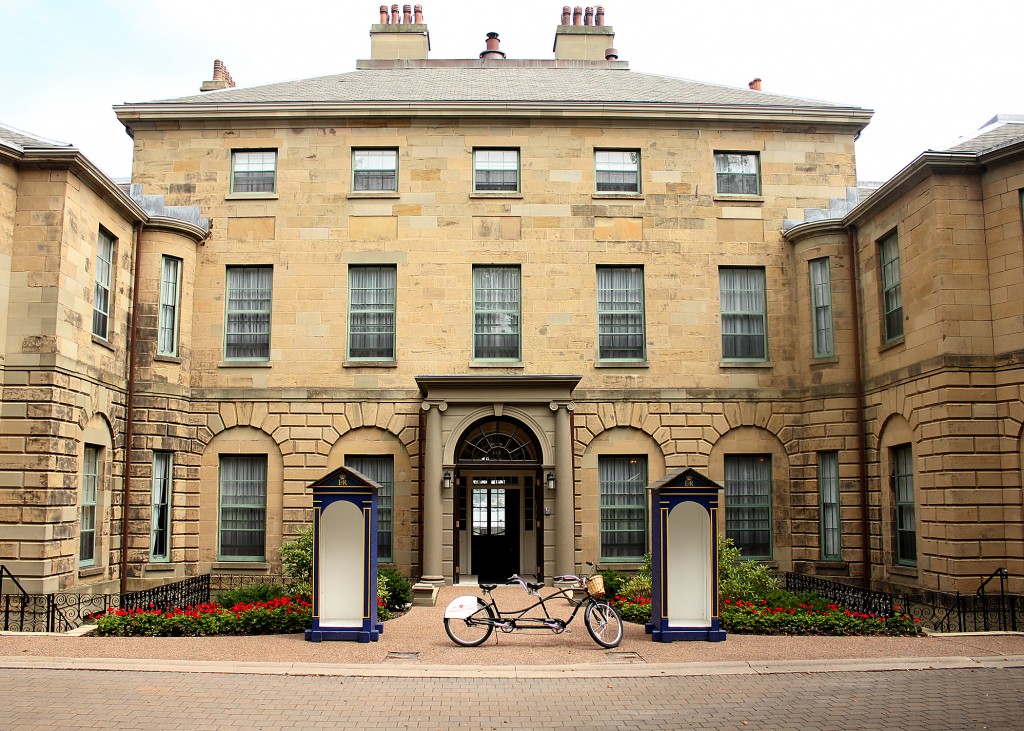 Government House
Next door to St. Matt’s, you’ll see Government House. Built at the beginning of the 19th century, this Georgian-style building has been the home of  Nova Scotia’s Lieutenant-Governor, the Queen’s provincial representative, for more than 200 years. 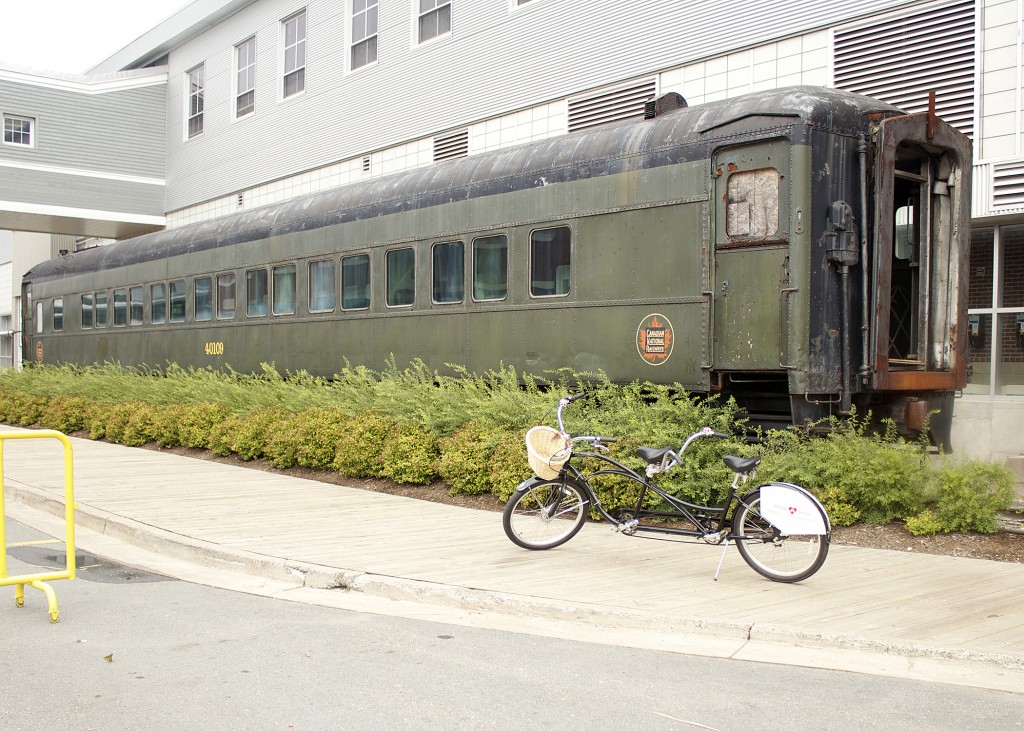 Pier 21
Finally, turn down Bishop Street and then right onto Hollis Street.  Both of these are one-way.  Go south two blocks on Hollis and then turn left onto Terminal Road.  Follow this past the brick building on your left and then turn around it to reach Pier 21. For decades, Pier 21 was the first place immigrants coming to Canada reached.  From here, they either settled in Halifax, somewhere else in Nova Scotia, or boarded a train to head west.

There is an admission fee to the museum, and it’s worth the fare, but if you’re short on time or money see the train car outside that represents immigrants’ journey to the west, and imagine what it must have felt like to arrive in Canada for the first time.

From here simply follow Marginal Road to the Halifax Waterfront and you’ll be dropping your tandem bike off to I Heart Bikes with a smile on your face, photos on your camera, knowledge in your head and blood pumping in your veins.

This route is doable at a leisurely pace in two hours, but we recommend at least three to really check out each site.