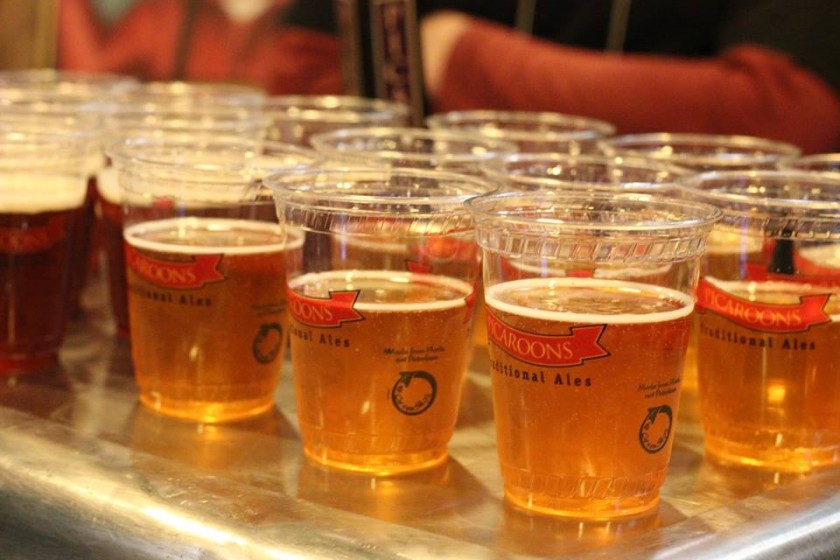 Great Lakes Brewery and Picaroons are teaming up by Skype to virtually co-brew Eastbound and Down IPA for the 2014 Canadian Brewing Awards in Fredericton, NB

Over the weekend we had our first Saltscapes Expo experience and IT WAS AWESOME! Room after room of Maritime food, wine, beer, and adventures. While there, I had a chance to reconnect with Stacey, our host and tour guide extraordinaire from our trip to Fredericton last May. During that trip, I was hoping we would get to meet the people behind Picaroons Brewery. But alas, they were updating their growler fill system while we were there.

We were at Saltscapes to judge the Taste of Nova Scotia chowder cook-off!

But, as luck would have it, owner Sean Dunbar was attending Saltscapes, too! He filled me in on a few exciting events and updates, and told me about the awesome (and innovative) collaboration they have coming up with Great Lakes Brewery from Ontario. Now this is a use for technology I can totally get behind! Read on for details on their upcoming collab. April 28, 2014 (Etobicoke, ON & Fredericton, NB): With the 2014 Canadian Brewing Awards set to take place in Fredericton, NB (May 29-31), two former Canadian Breweries of the Year are teaming up to create a special collaborative North American style India Pale Ale to highlight the festivities… and will be doing so via long distance using Skype.

“Due to the timing we unfortunately couldn’t get out to Fredericton to hang out with the guys from Picaroons,” said Troy Burtch, Great Lakes Community Manager. “After some back and forth discussion we thought it would be fun to come up with a concept and do the actual brewing on Skype.”

Once the style was chosen, Brewmasters Andrew Estabrooks (Picaroons) and Mike Lackey (Great Lakes) started working on the recipe development, with each brewer adding their own creative ideas. Eastbound and Down IPA will feature some Maritime Malt, made from 100% New Brunswick grown Newdale barley, and Lackey has selected a number of delicious hop varieties to add that Great Lakes hop character to the beer. Both brewmasters are expecting great things.

Despite the absence of having the Great Lakes clan personally in town, Picaroons brewers plan on making it a bit of a celebratory brew. “Most of our brew crew will be in attendance, and having fun along the way. It will likely look more like a kitchen party than a typical brew day,” says Dennis Goodwin, Marketing Director at Picaroons.

“We’re really excited to get out to Fredericton on May 29th to host a glass or three with Picaroons and the rest of our Canadian craft brewing brethren,” said Burtch. “Hopefully both Great Lakes and Picaroons will be successful at the Canadian Brewing Awards. It would be great to celebrate with some Eastbound and Down IPA.”

Eastbound and Down IPA will make its debut during the 2014 Canadian Brewing Awards and will also be available to the public in growlers at Picaroons Brewtique in Downtown Fredericton and select bars and restaurants around the city.