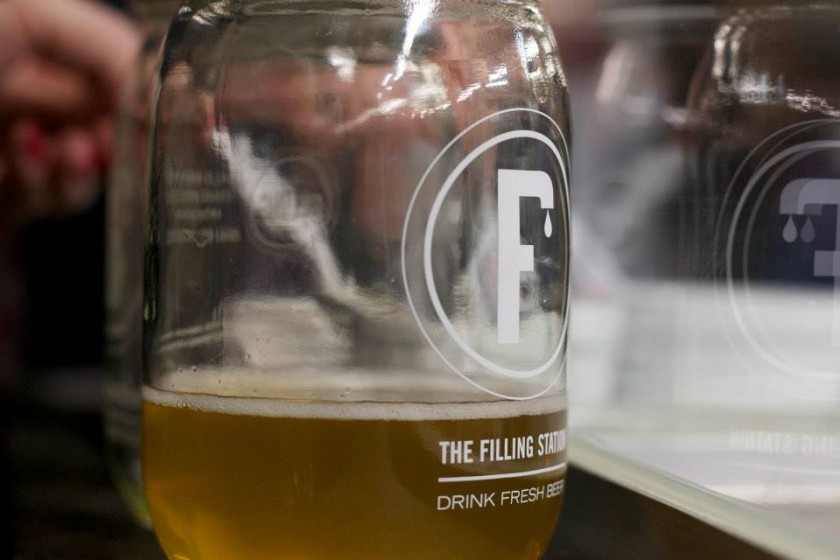 I’ll be honest, I was having a pretty rotten time in New York. It was an ongoing personal crisis, with little to do with the bounty of food and culture that is The Big Apple. But never the less, the sads were so bad we almost left a day early.

But we were booked for a Chelsea Food tour with Foods of NY Tours, something I had been looking forward to for over a month. I really love food, and history. Getting to experience both is one of the ways I feel like I’ve truly experienced a place.  And this wasn’t just any market we were going to explore, it was Chelsea Market – home of The Food Network. And so, we stayed.

We met our tour guide, Darrel, outside of a little wine shop in the Chelsea Market.

Once our group had arrived, Darrel handed each of us a care package – information, discounts, and a water bottle, before launching into a brief history of the market. The Chelsea Market building was built in 1898 and was once home to Nabisco. The Meatpacking district was a rough area up until the last 20 years, and The Chelsea Market is one of the things credited with transforming the area.

It was really nice to have someone who knew the stories and characters of the market there to show us around. We started at Eleni’s, maker of the cookies for The Academy Awards.

Next, we stopped into Ronnybrook Dairy Farms. This place reminded me a lot of Foxhill Farm in my hometown, with their rich, delicious milk in re-fillable glass containers. Ronnybrook’s milk has been called the Dom Perignon of dairy.

Right next door to Ronnybrook was Dickson’s Farmstand Meats. I was distractedly drooling over the rotisserie chicken in the shop window while the Ronnybrook tasting was going on.

We didn’t try the chicken, but we did try some very rich roast beef and some juicy sliced ham. While part of our tour took a bathroom break, we explored a spice shop. I wish I could share the smell with you via the internet. Intoxicating!

From there, we headed to Buon Italia to kick up our feet and dig into a kind of Italian quiche called a crostata. This one was made with a salty artichoke. It. Was.Good. Now if only I could get a recipe.

We took a second mini-break to explore one of the produce shops, which had mini-everything, including these adorable mini-pineapples.

And speaking of water…

Darrel points out a waterfall in the middle of the market. It was created when a natural water source was struck during construction. The market intentionally omits the music, leaving just the sounds of running water and conversation to fill the market.

We pop into Chelsea Market Baskets next to try some flavoured sea salt. Darrel serves them with plain, sliced cucumber sticks, something I am definitely doing next time we have guests over.

And then, cheese. Lucy’s Whey was one of the stops I was most excited for, and it did not disappoint. We tried slices of some of the best clothbound cheddar I have had the pleasure of tasting, followed by a delightful grilled cheese and pear combo.

I’m really not suppose to (wheat allergy), but I took a little bite of that sandwich. It was a teeny tiny nibble, and oh-so-good. We had a few minutes to shop after this taster, so I purchased some clothbound cheddar for later, and Drew picked up this super cool mini/personal growler at The Filling Station.

The Filling Station also had olive oils and other treats you could fill and go, and full-size growlers if you wanted more than a taste.

We also tried some salted caramels. I don’t have a photo, but you can check them out at the end of our video below (also a great way to see some of this tasty food in action).

After we had made our way through part of the Chelsea Market, we headed to the High Line (New York’s #2 tourist attraction and all around awesome green space) to walk off our food and learn about the converted raised railroad tracks.

The High Line was built in the 1930s. It was an elevated rail track that was designed in the interest of public safety. In the early 1900’s, there were many collisions between freight trains and street traffic. There were so many deadly collisions on 10th avenue, that it became known as Death Avenue.

The High Line lifted that freight traffic 30 feet from the street. It operated until 1980. In 1999, the community banded together to save the High Line from a planned demolition. Today it is an elevated green space dotted with restaurants, performance spaces and places to gather.

We took a short stroll through the Meatpacking district until we arrived at our final destination, Macelleria Restaurant. Here, we dug into a plate of pasta with ox tail (Drew ate mine once I had picked out a few small tastes of the ox tail).

I am not a big tour person, but then, Foods of NY Tours is not your standard tour. I felt like I was wandering around with a passionate local foodie. I loved getting to hear stories about each vendor, and taste a wide range of local treats. It’s made me eager to finally try Local Taste Tours, a walking food tour right here in my own city, to see what intricacies of my local food scene I might be missing out on.

We left New York directly following the tour. That was as good of an ending as we could have asked for, and a better ending than we ever could have planned. Home was calling.

On our next trip, we’ll plan to do a Foods of NY Tour at the start of our trip – if we can get tickets. There was one woman on our tour who has tried three years in a row to take the Chelsea tour. They are a wildly popular tour option (ranked 4.8 of 5 stars by more than 4,700 past tour guests) so if you are headed to New York, book this one before you go. You can book right on their website: http://www.foodsofny.com/

Thank you to Foods of New York for letting us tag along on this tour. When I read about it online I had a feeling this would be right up our readers alley (local food, local stories, local market – YES). I approached Foods of New York and they kindly waived our tour fee. The opinions in this post are 100% our own.