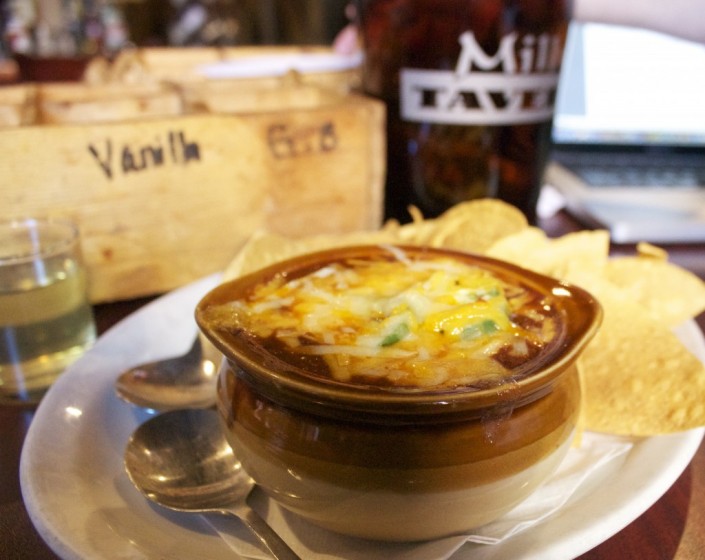 Gillian has been telling me about how good the chili is at Milly’s Tavern In New Hampshire since she visited it with her dad last summer. It’s made with their oatmeal stout, brewed in-house, along with a dozen other beer. It seemed like as good a reason as any to take a little detour on our trip to New York.

Milly’s is the campus bar for the University of New Hampshire’s Manchester campus. I’ve always felt that the campus bar is an important place. This is where budding academics come together to test their theses on their peers when their tongues have been sufficiently loosened to tear each other apart. Don’t believe me? Think about this the next time you watch A Beautiful Mind, or pick up a Tolkin book (good university friend of C.S. Lewis). Or X-Men: First Class, even.

I began my post-secondary studies in the late nineties, so the soundtrack that welcomed us at Milly’s was right up my alley: Pearl Jam, Alice in Chains, Counting Crows. Way to transport me back 20 years. It was, however, a bit jarring to walk into some kind of fundraiser cycling challenge when we opened the door to find a dozen stationary cyclists pedaling furiously while watching their progress on a big screen. The bartender said they’d been there since 7am, while she’s only arrived at 10am, so she didn’t know what the hell was going on either. Let me tell you, there was an awful lot of spandex walking around.

Milly’s has their beer listed on a chalkboard, all roughly 20 choices. They do flights of six 5oz samples in brought to you in a weathered wood sectioned container with a rope handle. We ordered two to sample all their non-pumpkin ales (there were seven varieties of pumpkin ale, we’re generally not fans) and their current cask-conditioned ale, which was a pumpkin pie.

We were enjoying mouthfuls of the chili on tortilla chips between every sample. The chili is rich and the jalapeno slices on top gave it a little extra heat. No wonder it’s been named #1 Chili for “Best of NH”. 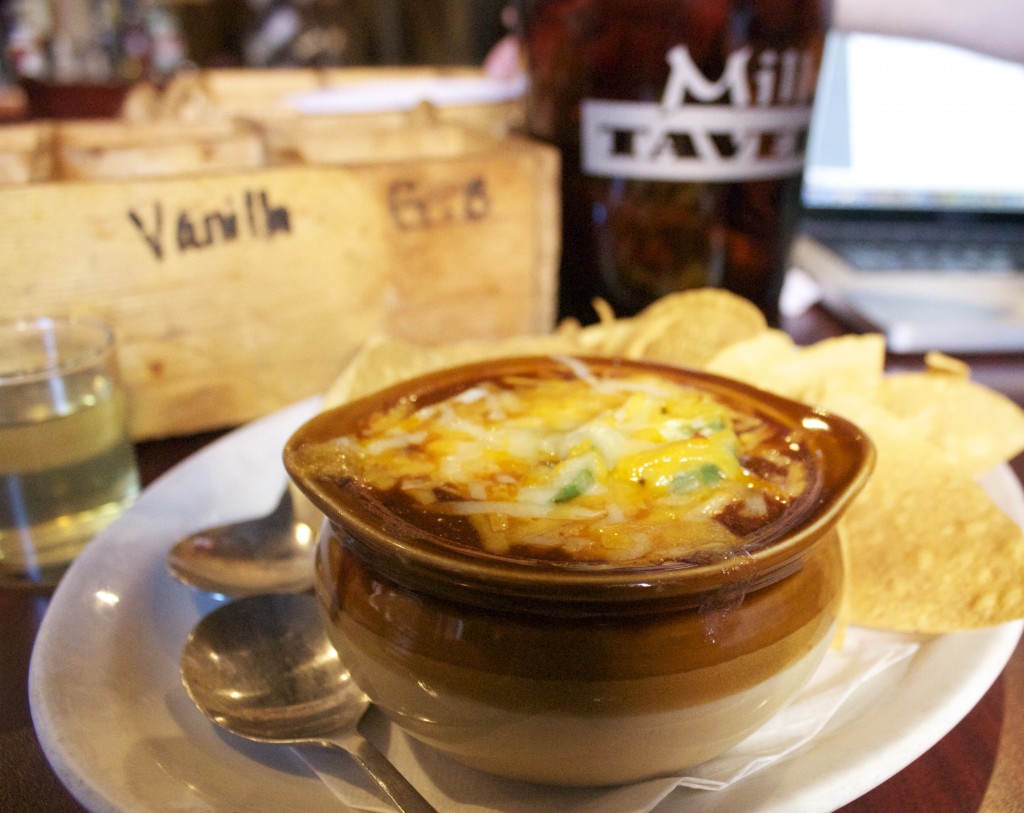 Make sure you check out the bathrooms while you’re there. The walls and stalls are covered in interesting, and often hilarious, beer trivia. At one point, a stranger and I were just standing in the middle of the bathroom reading the walls.

If you find something you like at Milly’s, and you probably will, they have two kinds of growlers to fill to take home. We have the 2L fliptop, which is a great container. They have a really interesting new stubby little round growler that we’d never seen one like before which holds 64oz.

Milly’s is growing, operating under the name of  Stark Brewing company (their umbrella name) and is will soon be able to can their brews.