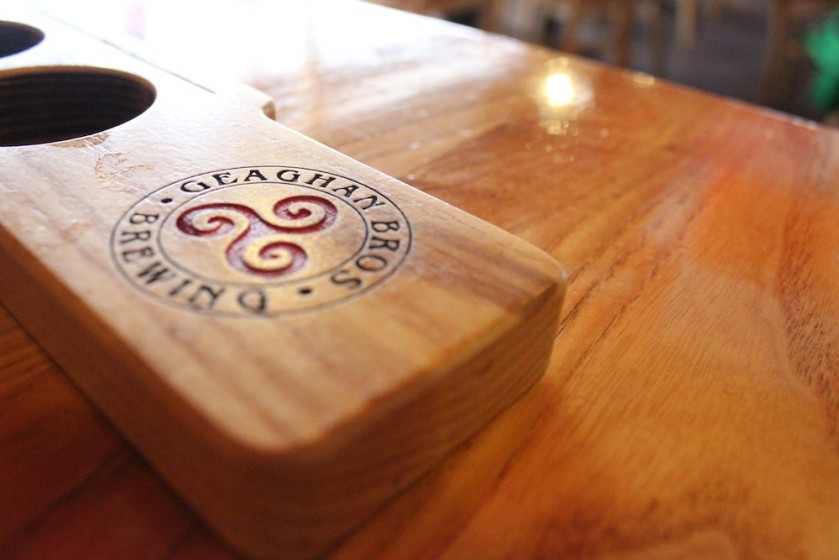 Have to admit we were skeptical of Geaghan’s when we first pulled up. It’s connected to a motel just off the main strip of fast food restaurants and strip malls (you know the kind of street). When we entered, it looks not unlike a place called Shenanigan’s (the place with the shit on the walls). The kind of place you expect to find family-sized portions on a plate and unlimited pop refills. You know, not the kind of place you’d expect to put much effort into the beer they brew on-site.

But, we were here, and when we saw the line-up of beer brewed, everything from a Weiss, to a range of APAs and IPAs to a stout, we thought there might be reason enough to order two sampler trays.

We made the right call. From the first beer, and reinforced with every sample we tried after that, we learned that the folks at Geaghan’s (ie.: the Geaghan family), know what they’re doing when it comes to beer. They’ve been running the pub since 1975, and started brewing in 2011. Their brewery is run by solar, so we felt extra good diving into their line-up. And that’s not the only feel-good feature at Geaghan’s, they donate their spent grain to a nearby farm for use as cow feed.

The Weiss amplified the bright sun and made us forget about the cool temperatures. If we lived in Bangor, no doubt this would be my summer patio beer. Next we tried the solid, unassuming red, before getting into the APAs and IPAs we tend to stray toward.

The brewers at Geaghan’s, Ryan Powers and Andy Geaghan, do a great job of getting the full taste profile from their hops. Brewing with Chinook, Cascade and Columbus hops, they have one solid and one standout sample in both their APAs and IPAs. The Lineman Pale Ale makes for a great conversion beer. Accessible enough for commercial beer drinkers to not be intimidated, while flavourful enough to enlighten them as to the merits of well-crafted beer.

A beer big enough to come with a limit…

The standout IPA was the Capt Kool. It’s a goofy name for a complex-tasting IPA. With all three of the aforementioned hop varieties mixed into one beer, you can seek out a new taste note in every sip.

The Roundhouse Porter, with its smooth, chocolate malt flavour was like dessert, while the Dad’s Oatmeal Stout with its roasted barley was the coffee you get with dessert.

There were no misses here, so we couldn’t resist getting a growler of Capt Kool to go ($3 deposit and $13 fill) for the road, and we plan on making sure we stop in on our way back to refill it.