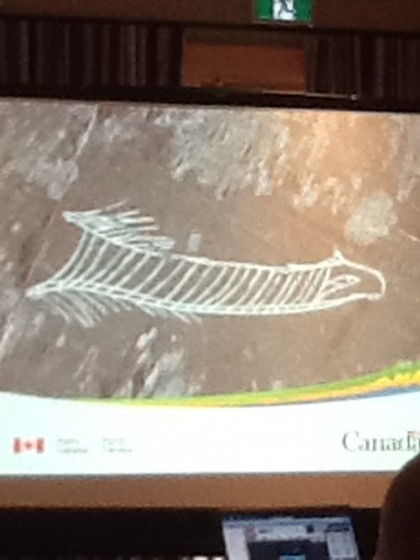 We had the good fortune of being invited to White Point for the summer solstice to watch a sunrise ceremony and learn about Kejimkujik Petroglyphs.

This is an important time in many cultures, including Mi’kmaq.  To celebrate the beginning of summer, Elder Todd Labrador led us in a sunrise ceremony at the beach, that included a smudging and the Honour Song (see clips in the video below).
http://youtu.be/WUARuRme7Ao

There were a variety of other cultural activities taking place at the resort that weekend.  Unfortunately, we had missed the previous night’s drum circle, but I was looking forward to the morning’s discussion on the Kejimkujik petroglyphs. I had been to Kejimkujik Park for the first time earlier in the month. Keji has been and continues to be an important place for the Mi’kmaq people, in part because it was a traditional trade route but also because it is the home of many petroglyphs. Petroglyphs are significant images carved into stone.  Visitors to Keji no longer have open access to them.  This is partly to protect them, and partly because many of them are underwater.  There are 500 images at Keji, but many of them are fading due to erosion and human impact. Kathy Leblanc was the Parks Canada interpreter who led the discussion.  I think the original intent was for this to be a presentation, but Kathy opened the talk up to the floor.  Elder Todd Lbrador and his son Matthew both shared their experiences as caretakers for the petroglyphs, and many others in the crowd shared what Keji means to them.  Bernie Francis, Mi’kmaq linguist and co-author of The Language of This Land, Mi’kma’ki, also contributed to a spirited discussion on the Mi’kmaq language and the history of the petroglyphs. You may not be able to see the original petroglyphs, but several methods have been developed to cast them in silicone and in copper, and these casts are available for visitors to see.  It is estimated that in 50 years, the original Kejimkujik petroglyphs will have completely faded.

You can see the casts up close by going on one of the daily tours at Kejimkujik National Park this summer. With the new oTENTik options and Learn to Camp programming, it is a great time to pay a visit to this culturally and historically significant site.

You can read more about our visit to the new White Point Beach Resort HERE.