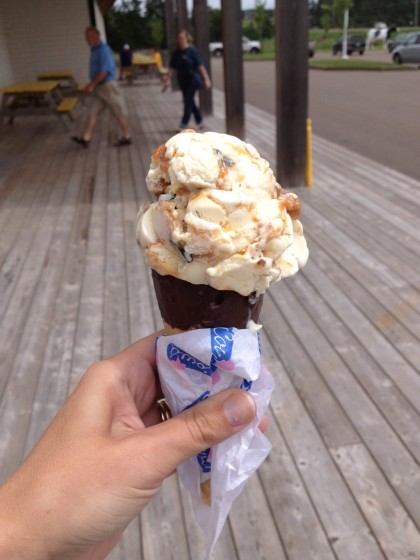 Growing up, my family visited PEI a lot. And on every visit, the highlight of my trip was our stop at the Cows Ice Cream store for a cone and a t-shirt. I got a new tee every year. I had the standard, the Anne of Green Gables shirt, the Spice Girls shirt, and a range of other pop-culture cow references that, as a kid, seemed like the coolest fashion around. It has been a long time since I have been to cows, but on our most recent trip we were staying almost across the street from the Cows Creamery.  Cows Ice Cream opened its first store at the Anne of Green Gables village in 1983 at the time they sold only one flavour – vanilla. By 1985 they had opened a second location and had increased their flavour offerings to four. They started making funny shirts for their employees and before they knew it customers were offering to buy the shirts off their backs. Today cows has 10 locations and sells over a million scoops of ice cream every year and over 100,000 shirts world wide. They have also continued to expand their product line to include cheese, butter, chocolate and chocolate covered chips. Got my hat on for the Cow’s Ice Cream tour. Cows uses premium ingredients – fresh, local cream, house made chocolate crafted from Belgium cocoa, local berries, and vanilla from Madagascar. They hand churn their ice cream before hand layering it with the ingredients. It was impressive to see footage of staff churning and pouring and mixing fresh ice cream with layer upon layer of caramel, chocolate and toffee. Because it is all fresh, the ice cream is only made 60 days a year during peak consumption times because with all of those fresh ingredients and no preservatives they can’t just make it and store it.  And all of it – the ice cream, t-shirts and other food goods – is made right in Charlottetown, a true local company even after 30 years in business and multiple product expansions. You can tour the cow’s creamery for $5 per person. Tour comes with a sample of ice cream as well as a small sample of Cow’s cheese and Cow’s chocolate covered chips. After the tour, and a small sample of their most popular flavour we couldn’t resist buying a full-sized cone. After all, there are few things better than an ice cream lunch during our too-short summers!

Note: Cows Ice Cream covered our admission to the ice cream tour so that we could learn about their products and history. We bought our own ice cream cone following the tour. The opinions in this post are our own.