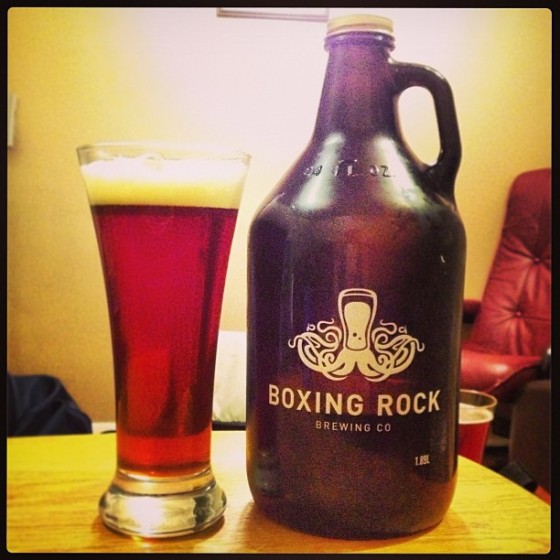 Boxing Rock is the realization of a dream for Emily Tipton and Henry Pedro.  Henry has been interested in brewing beer for as long as he’s been interested in drinking it, and Emily gained an appreciation for good beer of various styles while spending a few years in the UK.  As with many entrepreneurial people, what began as a hobby became a career. Both Emily and Henry have been living in Shelburne for six years, and has known that this is where they wanted to have their brewery.  They could’ve picked another town, but the sailing is good here, and it’s the kind of place where they wanted to raise their respective families.  They also knew it’s a place that supports a growing small business, and in turn they could draw attention to by exporting their craft beer to other markets, beginning with Halifax. Emily and Henry have spent the last few years testing various samples of beer with friends and neighbours to find out what people liked to have with different meals, to bring some to a party, to have in different seasons.  They used this feedback to determine what styles they’d open with: Temptation Red, Honky Dory Pale and The Vicar’s Cross Double IPA.

The red is strong at 6%, with a nice malty taste that sits pleasantly on your tongue.  The pale was Emily’s call, something not too hoppy that’d appeal to women (and men) who might not be used to the stronger character of craft beer.  With its hints of green tea, lemon and orange zest, and honey, it’s sure to be a summer favourite.  The Double IPA wasn’t ready when I visited, but I am looking forward to when it’s ready in time for Founder’s Day on June 20. Boxing Rock is available in both 1.87L and 1L refillable growlers and six packs.  The six packs will be showing up on NSLC and boutique shelves this summer, beginning with Premiere Wine & Spirits this week.  The growlers can be found at the Lockeport, Yarmouth, Shelburne and Halifax Seaport beginning this week.