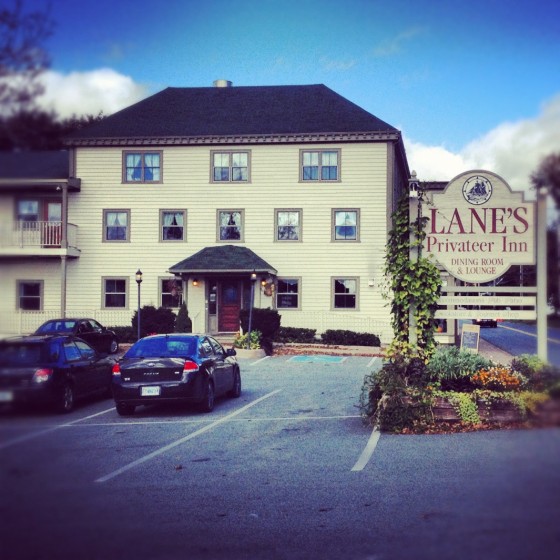 Ever since our first visit together two years ago, Lanes Privateer Inn and Restaurant has become our favourite place to grab a bite and a pint in Liverpool. It has a great location, a strong history, great food, local ale, and the prices are just as easy to swallow as the food.

But Lanes really came to life during our most recent visit, for their Privateer Days Historical Dinner. The dinner theatre event brought early 19th century dining to life with traditional French meals and character actors dressed in period attire. We were greeted by Joseph Barss, a captain celebrating his homecoming after five months in captivity in the eastern states for his privateering ways. Between courses, the characters played the host and we learned details of their story as they interacted with each table.  During courses, we were treated to their lively dinner banter at the head table. As the evening progressed, the story of Joseph Barss, his wife, and his business partner Enos Collins unfolded.

Joseph Barss was an experienced privateer from Liverpool, Nova Scotia. During the war of 1812, Barss commanded the Liverpool Packet, a captured slave ship. With this ship, Barss reportedly captured more than 33 ships before being captured himself by the Thomas from Portsmouth, New Hampshire. Our dinner took place six months after Barss return from his five month jail stint. As the story unfolded, we learned that Barss was considering returning to sea, despite the potential to be recaptured and killed for returning to privateering. His partner, Enos Collins worked to win the audience to his side, and convince Barss to return to privateering. His wife also petitioned the audience, concerned that a return to sea would mean recapture and death, and that a farm life at home with her and his nine children was a wiser choice. We were treated to four courses of traditional 19th century French fare paired with Gaspereau wine (@gaspereauwine). We were greeted with a spiced rum punch, “the last of Barss private stock from before he was jailed”.  The first course was a fish stew – light broth with mushrooms, potatoes and herbs and a single piece of haddock; a simple but delicious prep for our taste buds. Next, Solomon Gundy, a traditional garden salad with ham (rather than today’s pickled herring on a bed of lettuce). Lane’s version had ultra fresh veggies with pickles and capers. It was my favourite part of the meal. It came with a tri-hat pastry filled with cheese. The third course was a sea pie. Named sea pie because it has three “decks” of pastry, it was filled with lamb and chicken pieces and served with baked sliced potatoes (skins on) and steamed carrots. I couldn’t eat either the tri-hat pastry or the sea pie but Drew loved both, describing the first as very cheesy and the second as hearty. The final course was a lemon syllabub, a dessert that dates back to 1655. This simple delicious dessert is a mix of real whipped cream, white wine, and sugar. Ours also had lemon, and was topped with a strawberry quarter.

During dessert the character actors finished their story. They told the audience that Barss did return to sea and was once again captured. He was not killed, as suspected, and after serving a second prison sentence he moved to Kentville with his wife and 9 children where they operated a farm.

His partner, the enterprising Enos Collins, made a fortune, becoming the richest man in Canada. He denied all ties to the privateers and went on to found the Bank of Canada.

Barss was one of the first families to settle in Liverpool, and Lane’s is located in his former home. It felt a bit surreal to sit in on what could have been a real conversation between the Barss family in their former home, and hear two sides to what would inevitably be an important historical decision.

See more of our adventures in Liverpool in the video below!