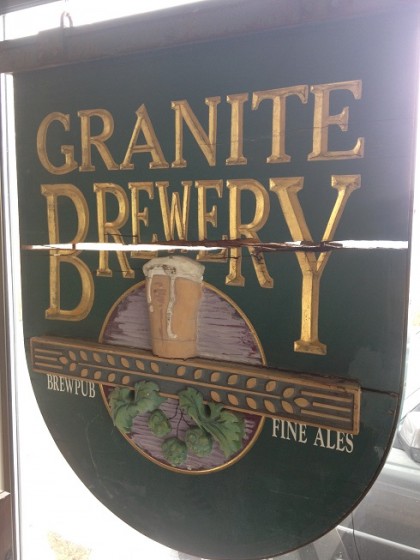 After our recent visit to newly-opened Big Spruce Brewery in Nyanza, Cape Breton and announcements of two more Nova Scotian microbreweries opening this summer, we wanted to know more about the history of craft beer in Nova Scotia. So, we thought we’d pay a visit to Nova Scotia’s longest-running microbrewery, Granite (@GraniteBrewery).

Granite Brewery has pre-dated all of the other existing breweries by at least a decade, going back to 1985.  It has changed over the years, having begun as a brew pub, first on Barrington Street at Ginger’s before moving south to the Henry House.  Four years ago, Granite went from being a brewpub to its new home as a brewery on Stairs Street in the North End. I spoke with Joe Keefe, son of founder Kevin Keefe, about the move.  He told me that the move has worked well for Granite.  Not only are they in the middle of the burgeoning scene in the North End, but this location makes it easier for many of their long-time loyal customers who have moved outside of the downtown core to reach them. I also spoke with Kevin himself, and asked him about the recent explosion of NS craft breweries.  Kevin also happens to be the president of the Craft Beer Association, so he literally is the elder statesman of the Nova Scotia craft beer community. Kevin brought up the sudden burst of breweries in the 1990s, none of which are still around.  The difference between now and then, he says, is that this time around it’s people who know beer brewing it, they’re making better beer, and the market is demanding it.  In the 90s, craft beer only carved out less than 1% of the market.  Today, it makes up 4% of the beer market, with room to grow if the 7% share of the U.S. market is any indication.

Kevin told me that every time a new craft brewery opens, it’s a good thing for everyone.  Each brewery increases the general awareness of craft beer in Nova Scotia, and that has translated into increased sales for Granite.  Not only that, but each brewery has been good about referring their customers to each other’s brews.

Kevin cited Big Spruce and  (since re-named North Brewing Company) specifically as breweries that are contributing to the local scene by doing things a little differently (organic with an especially good stout and Belgian ales, respectively).  Staying true to his role as elder in the scene, Kevin has done some experimenting with seasonals over the years, but mostly sticks with what Granite has always done and what has won them such loyal customers: traditional, well-balanced English ales. If you’re looking to sample Granite’s various ales, there’s no better way than to get the sampler tray at the Henry House.  The brewery itself deals in kegs and Growlers, so I picked up a Growler ($9 for the jug itself, refundable, and $10/fill, $11/premium fill) of the Best Bitter.  This is a very versatile beer that I found perfect for a rainy evening of writing.  To find out more about Granite’s various beers, go here.