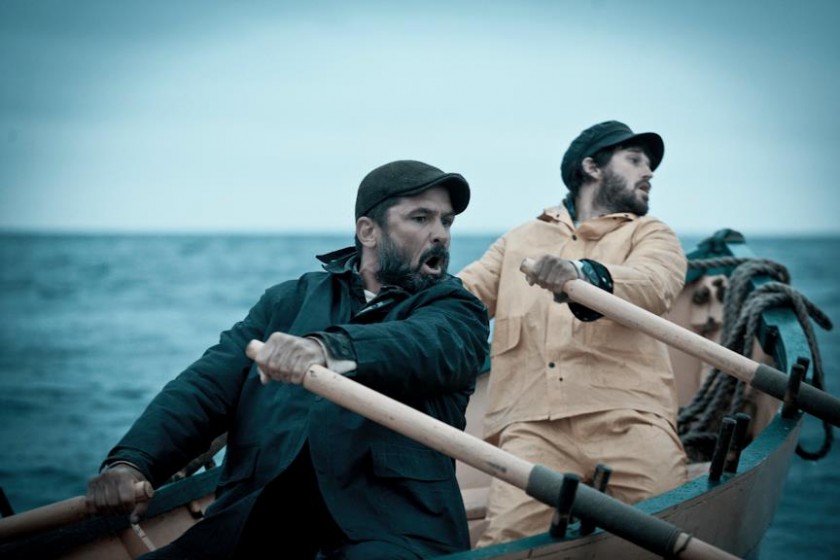 Between Sky and Sea…Between Life and Death” – The Disappeared

I had to let this movie sit with me for a few days before I could even attempt to start to write about it.  It is that kind of film; the kind that leaves you wanting, breathless, a little unnerved.

The Disappeared was top of my list to see at this year’s Atlantic Film Festival. I clearly wasn’t alone in this, because not one, but both screenings sold out before I could get a ticket.  I was beyond happy when I heard it was coming to theaters this week, and that I would finally have a chance to see it.

The Disappeared is the story of six men lost at sea.  It was shot in Nova Scotia, just off the coast of Lunenburg, in September 2011.  Director Shandi Mitchell developed the story after a conversation with a 92-year-old who had worked on the ocean his entire life. She asked him if he had ever been afraid. He looked away and answered Once, after his boat went down and he and his crew had to find their way home.

“It began with a question. Who would I be if everything was stripped away?” says Mitchell, an award-winning filmmaker and author based in Halifax.

The entire movie takes place on the open sea. Just six men, two row boats and the vast Atlantic.  The movie is so quiet, the sounds and shots so well selected, and the acting so good that you feel a part of it.

It is a strong character piece with impeccable acting. There are no flashbacks, limited props and no music to help tell their story and yet by the end you feel as though you have known these 6 men their whole lives. You feel for them, their joy, their anger and their hope. After the premier at The Atlantic Film Fest, The Disappeared had a successful 9-city tour across Canada.  Along the way, it collected a number of awards including the coveted William F. White Reel Canadian Indie Award, ACTRA Award for Outstandng Performance (Shawn Doyle for his portrayal of Pete), and was nominated for two prestigious Canadian Screen Awards. The film has its commercial debut at 7 p.m. tonight.  It will be followed by a Q & A with Mitchell, Downey, Levert, Matheson and key crew, as well as a reception at the Victory Arms Pub.  The party is open to audience members. The film will screen for the whole week (through April 25), and hopefully beyond, depending on demand.

Make demand. This is an amazing film with a talented local director and many other local talents. The more we support great homegrown entertainment like The Disappeared, the more likely it is that these talented writers, filmmakers and actors will have the opportunity to make more.