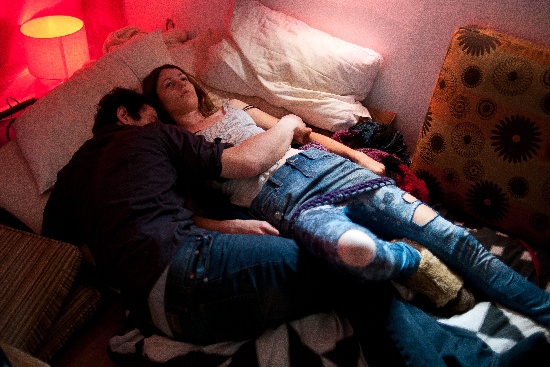 We just got home from the premiere of a new Nova Scotian film by @MichaelMelski called Charlie Zone (@CharlieZoneFilm).  As director Michael Melski said in the post-screening Q&A, this film is about the two lead characters’ parallel searches for redemption.  Avery is a down and out prize fighter, who has been hired to rescue junkie Jan from a crackhouse in North End Halifax (but according to the @hfxtransit bus stop sign is actually shot somewhere on the Dartmouth side along the #58 & #61 routes). This film dares to go places many films don’t, and does it well.  Melski wanted to turn over some rocks and expose the seedy underbelly of Halifax, and he succeeded.  It’s jarring at times to see familiar neighbourhoods in such a dark context, but it works.  The film also succeeds in transcending Halifax.  It’s a story you believe could happen anywhere, a New York worthy gritty film set here at home.

Charlie Zone explores a number of challenging themes.  There are some plot twists, so I have to be careful about what I say but much of the film is set in and around a crackhouse.  Crime, both organized and not, is portrayed in a context and setting that feels real and un-exaggerated.  The crimes depicted seem to be just part of day-to-day life for Melski’s characters. The film features a First Nations lead actor, Glen Gould, without making a big deal about the fact that he is First Nations.  The issue of race is present, even if it’s not explicitly brought up. I imagine that this is not dissimilar to racial issues in the lives of anyone who is marginalized due to race.  The film’s depiction of Millbrook is one of deep connection to family, old friends and community.

It’s also nice to see French get included in a film in a way that isn’t forced.  This is Canada, and some people speak French here, and some people switch very easily between French and English.  And, honestly, no one can swear like the Quebecois.  By the way, shout out to my former classmate, Ryan Doucette, for his role as the Montreal biker new patch.

Including some of these themes could have flopped, but Melski and his cast and crew deftly balance them, along with another very difficult issue.  There are a couple plot points that I felt were leaps to get from A to B, but overall we both would give rave reviews.  Amanda Crew and Glen Gould both deserve credit for their performances, among a cast where there really weren’t any weak links.

Charlie Zone is playing at @EmpireTheatre Park Lane this week.  It is a great film, action packed, fast paced, with some great plot twists.  It’s not just a great local film, it is a great film, period. Do yourself a favour and go see it.