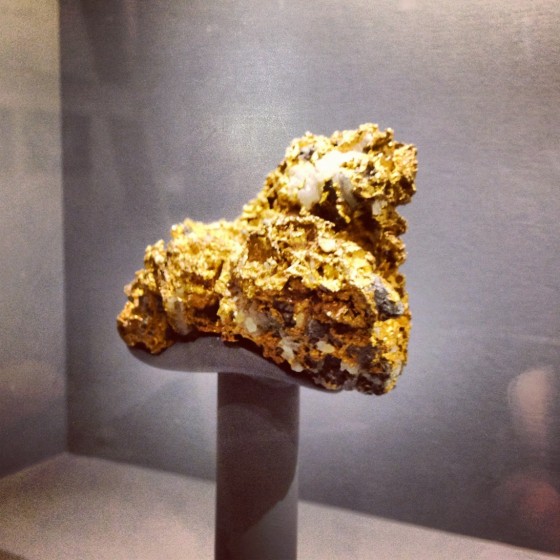 There is only a very small list of things that will entice me to leave my house on a snowy Friday; food, adventure, and…gold.  So, it was with little reservation that I pulled on my winter boots and braved the elements to check out The Art Gallery of Nova Scotia’s newest exhibit Gold: A Nova Scotia Treasure (@ArtGalleryNS). My trek was even further validated after hearing that the exhibit was a collaboration with the Museum of Industry in New Glasgow, one of my favourite examples of fun, educational experiences. The exhibit is the perfect blend of art and history.  It was inspired by the discovery of 15 watercolour paintings by Frederick B. Nichols.  These paintings document all three NS gold rushes, and date as far back as 1865. Over the three years it took to develop the project, it grew to include everything from fine art to jewelry to Anne Murray’s Gold Record for Snowbird, piecing together a 150 year old story of Nova Scotia’s relationship with gold.

I particularly liked that the exhibit shines light on Nova Scotia’s mining history.  When we visited the Museum of Industry back in August, it really struck us just how much our province has been shaped by the industries we were founded on.  Mining, and the subsequent benefits and horrific disasters play such an important role in the province we have become. Nova Scotia Gold does a good job of depicting both good and bad elements of our three gold rushes, and has a particularly interesting section on the Moose River Disaster of 1936.  This event trapped 3 workers underground for 10 days.  Through the exhibit, I learned that news coverage of this disaster is considered to be the first 24 hour news coverage in North American  history. Starting at 6 pm on April 6, 1936, Maritime reporter J. Frank Willis updated audiences for two minutes every half hour for 56 hours straight.  Prior to this, radio was primarily used for entertainment rather than as a news source.  You can hear some of his broadcast in the CBC Archives here:  http://rc-archives.cbc.ca/programs/129-3860/page/9/

The exhibit opens to the public tomorrow and runs until March 31st.  While there, be sure to check out some of our provinces more modern applications for gold, like this stunning gold necklace from local artist Locusart.

Can’t make it to the AGNS before the end of March?  The exhibit will travel around the province over the next two years.  The next stop will be the Museum of Industry.  Starting in February, AGNS will also launch a virtual exhibit, making it accessible regardless of where you live.