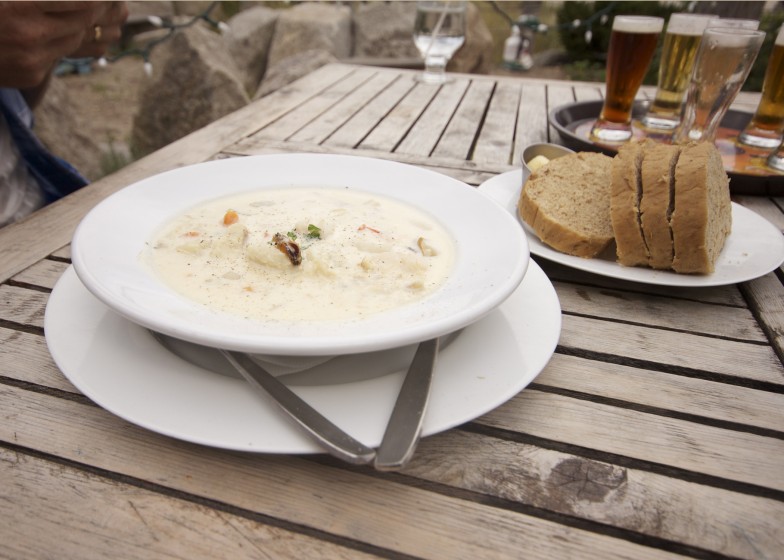 On our way to a weekend in Annapolis Royal we decided to stop for a late lunch.  It was a great opportunity to visit another Taste of NS Chowder Trail site, so we went to The Port Pub (@portpub) in Port Williams. The Port is the brainchild of six friends from the area who were discussing their dream place to eat and drink in Port Williams over some beer.  We’re glad they didn’t sleep the idea off because these friends dreamed big and visitors surely benefit from the result. The patio area has been made with an eye for detail and a view of the Cornwallis River.  Brewmaster Randy Lawrence looks after the production of the attached Sea Level Brewing Co. (@sealevelbrewing) We, of course, ordered a sampler tray (my favourite was the Blue Heron Bitter, @gillianwesleyns liked the Planters Pale Ale). We split a bowl of chowder to see how it compared to its fellow Chowder Trail members.  Not only did it compare, but it is now leading the pack.  Gillian swears this is the best chowder she has ever had, while I feel it’s tied with Lunenburg’s The Grand Banker.  I’m willing to join her in giving it a score of 9.5/10 because not only was it very flavourful with plenty of mussels, lobster, scallops and haddock, but the bread that came with it was made on-site using Sea Level’s Port in the Storm Porter ale. The Port offers complimentary hats and sunscreen for those dining on the patio!

A great meal, in a beautiful location, The Port has been added to our list of must-try spots in the Annapolis Valley.

Note from @GillianWesleyNS – Soon to be brides take note, with its wrap around porch on the water, secluded rock seating area and simple yet large interior, The Port is a stunning wedding venue (and they do hold weddings, I asked).