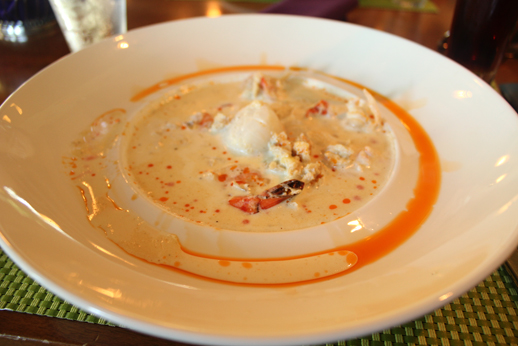 A good friend of ours recently relocated from Calgary to Halifax.  As a thank you for letting her crash on our couch for her last night as a non-homeowner, she offered to take us out for dinner. After narrowing down the list to veggie and gluten-free friendly establishments, and cross referencing with The Chowder Trail, we decided on Saege Bistro (@saegebistro).   Saege is located at Spring Garden and Summer between the busy university area and the busy Spring Garden shopping district, making it a comparatively quiet haven to socialize without being overwhelmed by a crowd.  This was my first time in Saege (Drew’s second), and I was immediately impressed with the décor.

Saege has done a beautiful job of creating a peaceful and inviting atmosphere.  The dining area is filled with spring green accents, pixi-lit trees and tropical plants and vines, all accented with exposed brick. We picked one of the cushioned booths, filled with bright purple and green accent pillows.

We had heard that Saege is a bit pricy, but after reviewing the menu I found things to be fairly reasonable.  There are a few pricier entrees ($22-$24), but these are offset with a good selection of affordable appetizers, gourmet burgers, pastas, and pizzas (gluten-free and vegan options are well labeled).  Their drink menu features local wines and beers, as well as local non-alcoholic options like Trinity Gold Lemonade.

We settled on the chowder (of course!), and a BBQ pizza made with roasted Oulton’s free range chicken, Garrison Irish Red BBQ sauce, poblano peppers and Foxhill Havarti served on a gluten free crust.  We liked both, especially the chowder, which was rich and creamy with a good variety of seafood.

My favourite part is that the vegetarian and gluten free options were indicated right on the menu.  I’m not sure if I’m alone in this, but asking for a run down of what I can eat always makes me feel like a huge inconvenience, especially when it prompts fellow diners to offer pity.
–@GillianWesleyNS

Chowder Trail Notes:  As you can see from the above picture, the chowder is presented in an elegant plate, that really shows off the addition of lobster paste (note the orange colouring). [Editor’s note: we now have it on good authority that the orange colouring is from paprika oil, also delicious and there is still a lot of lobster pieces in the chowder.]  As you can also see, there is a variety of seafood in the mix, including scallops, lobster, shrimp and fish.  Creamy and tasty, comes with sliced bread drizzled with olive oil, I gave this chowder 9/10, only losing a point because I thought the bowl could have been a little bigger given the price.  That puts it in a tie for 1st place with The Grand Banker (Lunenburg).  Three bowls of chowder down, 32 to go!