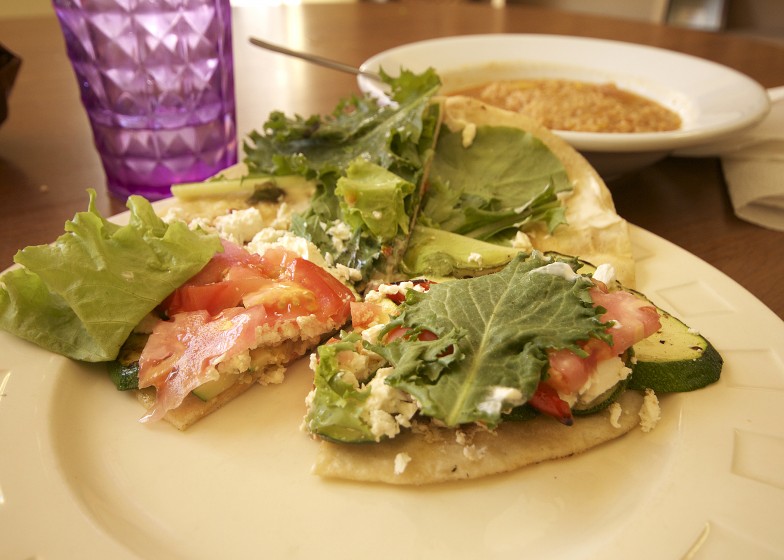 I have to start this one with a big thank you to @ChesterHrt. I was cycling the Chester Connection Trail with the sun overhead and my energy running low when I put out an SOS on Twitter asking people for places to eat in Hubbards. I got a couple replies, but her description of “an unknown gem of a place” “tucked in behind the post office…a bit off the trail” sold it for me, not to mention the daily special of jambalaya with shrimp and homemade sausage. An hour later I pulled up to what may as well have been an oasis. St. Lawrence Kitchen (@lawrencekitchen) has a small but lovely patio with a table for two. I parked my bike and went inside where I found a couple from New Jersey who summer in Hubbards finishing off a lunch that they clearly enjoyed and chatting amiably with Larry. Larry is the owner, operator, cook and server of St. Lawrence Kitchen, which is aptly named. The New Jersey couple soon left to give me their table as it was the only one there, with an open view to what really is a kitchen with a counter. There’s no menu here. Whatever Larry is cooking that day is what you’re eating. My disappointment in finding out that the jambalaya was the evening’s special was quickly forgotten as he opened a pot to give me a whiff of his summer squash curry soup with mushy rice. I ordered this and asked him if he had anything solid I could sink my teeth into to go with it as my appetite was pretty ravenous at the time. He fixed me up a zucchini, tomato and feta sandwich in a grilled pita wrap. I’m certain that even if I hadn’t been starving this would’ve been the best lunch I’ve had in a long time, and I tried to duplicate it within days, with nowhere near the success Larry had. While I was eating I got to talk to him about the place. As it turns out, it all began with an ongoing series of dinner parties he and his friends take turns hosting. The ones he and his wife hosted we’re becoming increasingly popular, to the point where the only thing that made sense was to open this establishment. What you eat here really is the product of a labour of love, and it comes through in the taste. There’s a strong emphasis on local here. On the shelves you’ll find things like Laughing Whale coffee and Covered Bridge chips, plus Purcell’s Cove Pottery that lead us to find out we have mutual acquaintances. The food is so locally produced, in fact, that Larry gets his veggies from his neighbours’ garden by bartering with them.

As for the price, my delicious soup and sandwich came to $10 and change. St. Lawrence Kitchen is a prime example of exactly why we are passionate about local travel, as this is a truly great hidden gem.