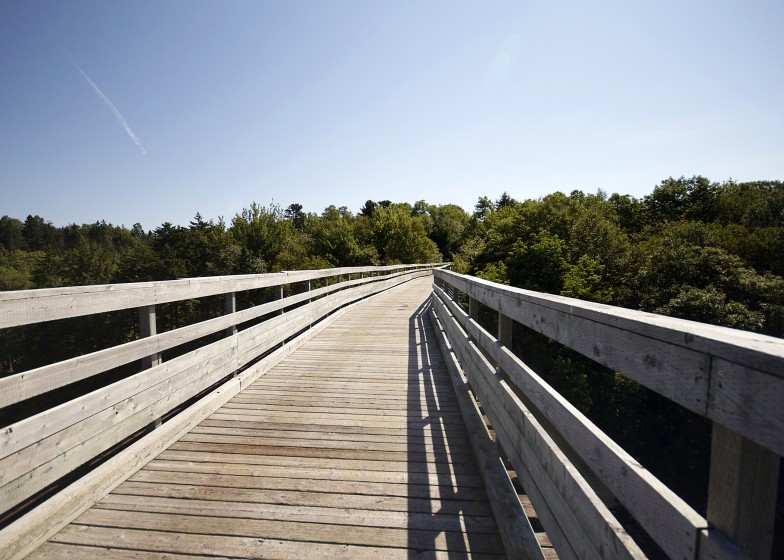 I have something of a habit of biting off more than I can chew. Six years ago I started running 10km races, The plan was to run a 10K, move to a half-marathon in one year, and a full marathon the year after.

After exceeding my expectations by running a half in 2007, I made the mistake of attempting a full marathon merely one month later. I thought a sneaker full of blood and walking much of the last 10km had taught me a lesson.  Still, when I learned it was possible to get from Halifax to Lunenburg by trail, I decided to bike the 120km route, one and a half times the distance I’ve ever cycled in one day. 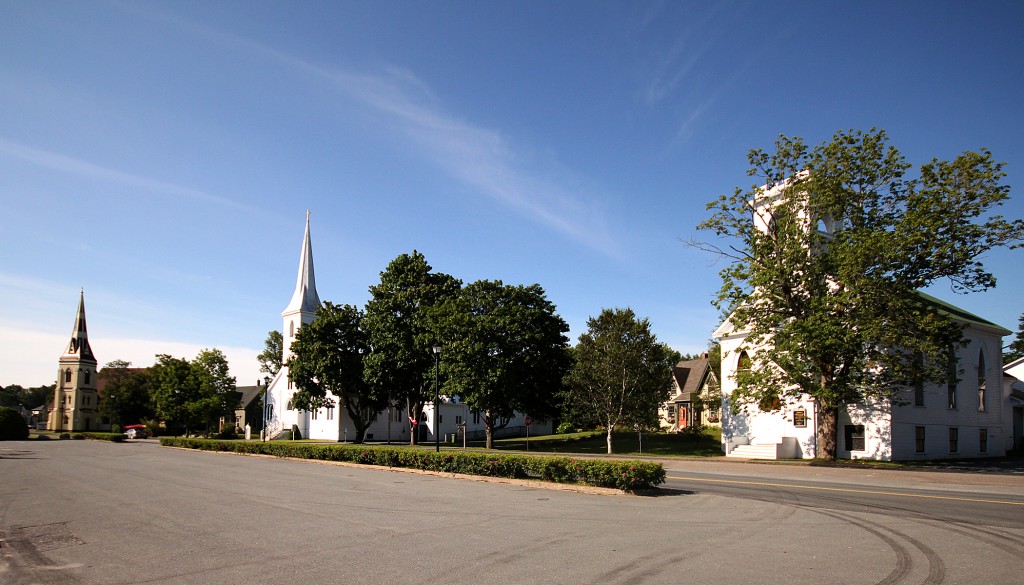 Our friend Josh from @TrinityGoldNS Lemonade sells at the Lunenburg Market every Thursday. I asked him to give me a lift there so that I could cycle back. After checking out the Lunenburg Market, I set out to find the Bay to Bay Trail. There was a map near the market that showed me a trail through town so I took that, but ended up at the #3 road, the Lighthouse Route, without finding the trail. Since it was only 10km to Mahone Bay and it was a secondary road, I decided to go for it. 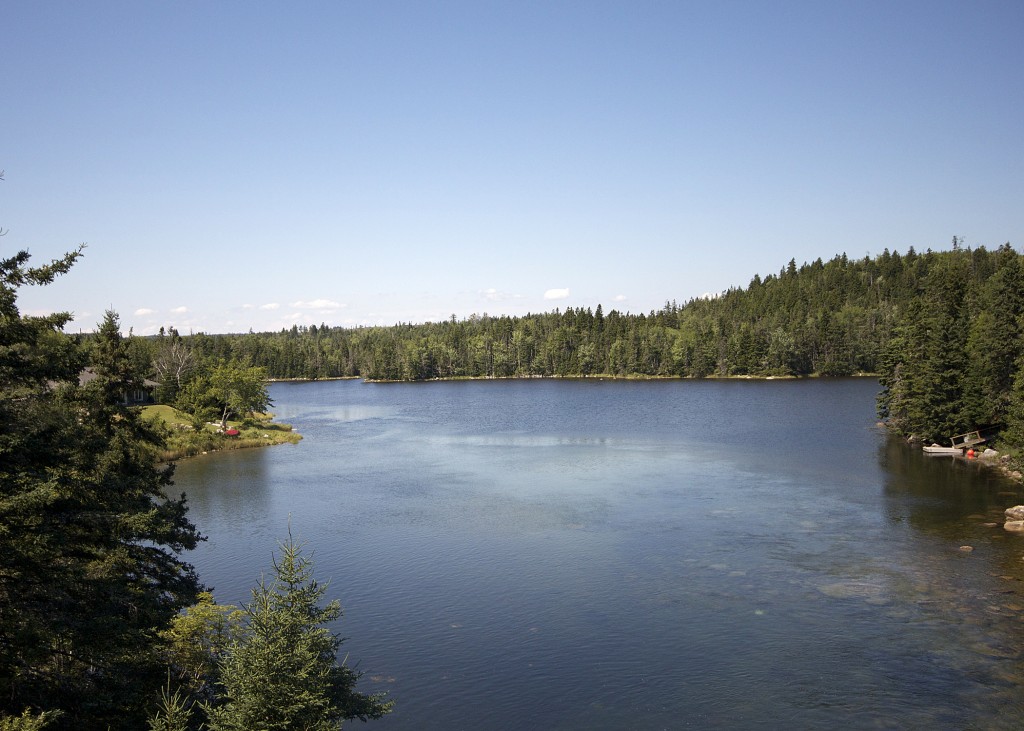 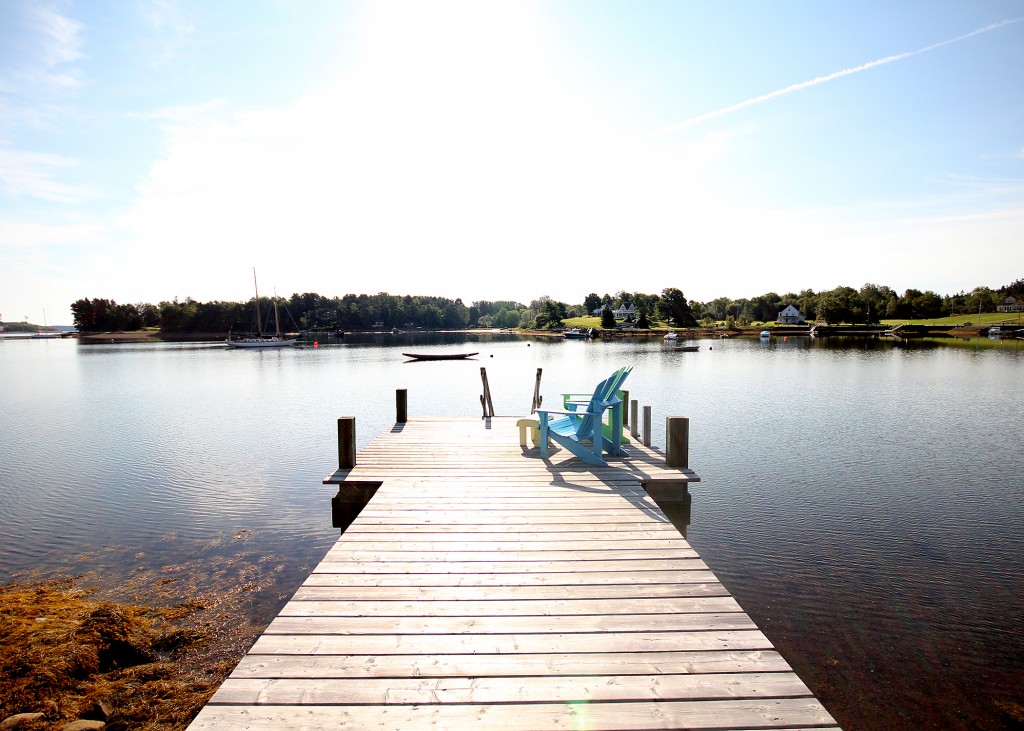 This first leg really set the tone for the day with some postcard-perfect coastal views and a chance to wander through Mahone Bay. It was too early for any of the shops to be open, which is probably a good thing because I would’ve likely never gotten back on the road if they were. As it was, I took about an hour to explore before asking for directions at the Visitor Information Centre. 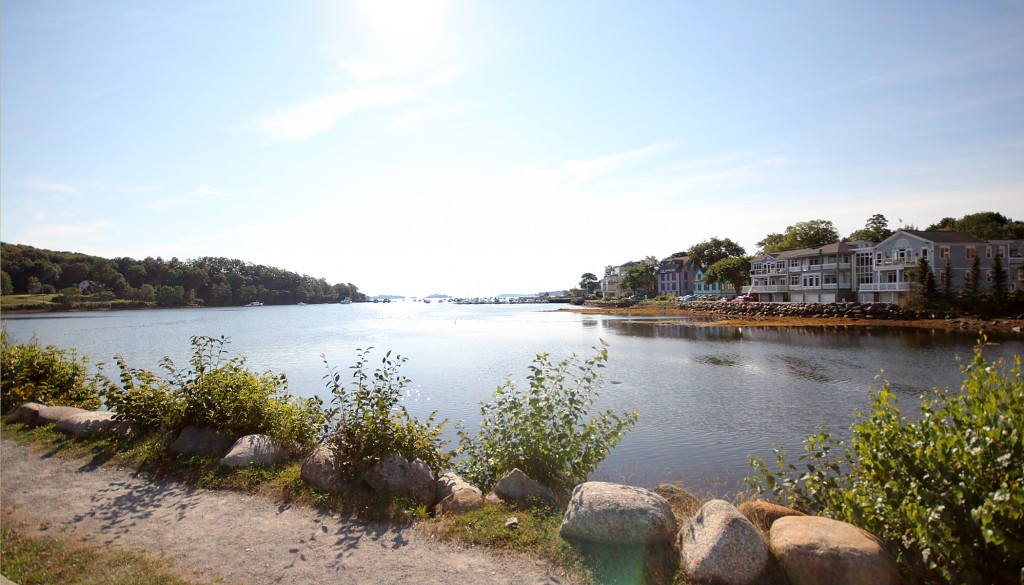 I took the Dynamite Trail 7.5km to get to Martin’s River. This route, and all of the trails I took from Lunenburg to Halifax, follow the railcuts, and are part of the Rails to Trails initiative happening all over Nova Scotia. It is a great way to re-purpose trails that have been out of use since the 80’s, and makes for a relatively flat ride, though it is pretty serpentine in parts. It is a lot of fun to imagine what it would’ve been like traveling by train a few decades ago throughout Nova Scotia.

The Dynamite Trail was in pretty good shape, not quite as nice as the BLT Trail closer to Halifax, but I was still able to make good time. Before too long I was switching onto the Chester Connection Trail. This section of the railcut is 35km long, with good, smooth packed earth in some spots, some bumpy dips in others and difficult loose gravel in the rest. By this point it was getting close to mid day so I was no longer protected by the shade of the trees with the sun directly overhead. Between the 29C heat and the slow gravel, I was pretty ready for a break. I stopped into the Chester VIC and gratefully refill my water bottles with their water cooler. 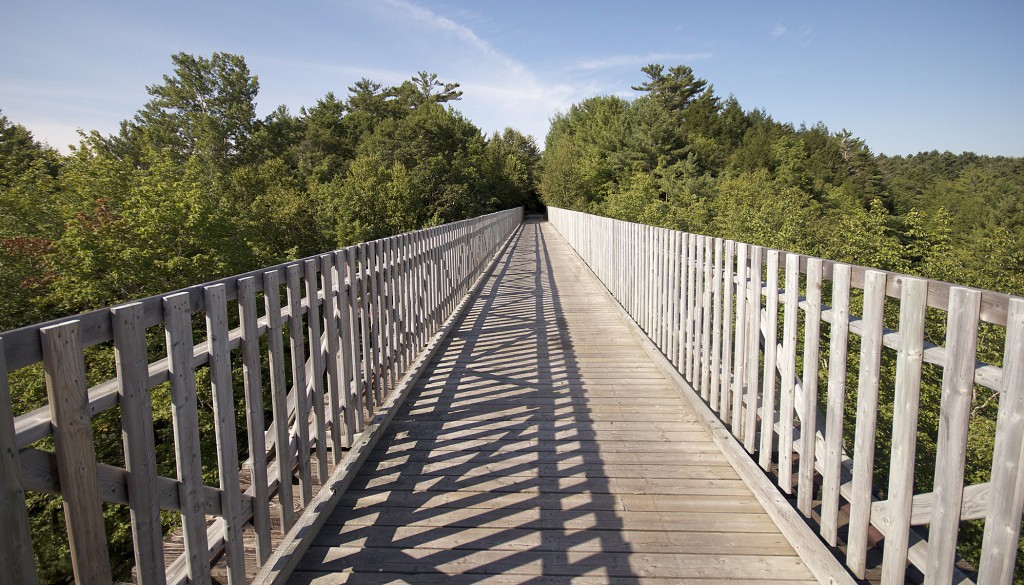 My favourite part of this trail is all of the old railroad bridges you ride over as you cross rivers like the Gold River, Barkhouse Brook and Middle River. These all made for some scenic photo ops. 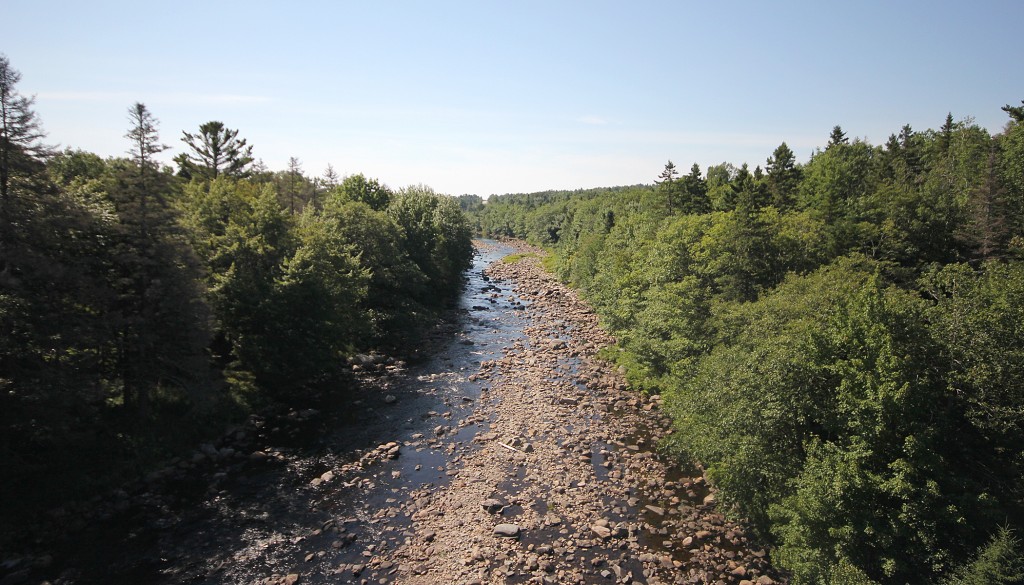 Finally I had slugged my way to where the Chester Connection Trail ends and the Aspotogan Trail begins in East River. The Aspotogan Trail is 12km long and was probably the most difficult section I encountered. I was tweeting throughout the ride and by this point I was begging people for lunch recommendations for where the trail ends in Hubbards. I could feel that my energy levels were really waning at this point so it was with huge relief that I pulled up to the St. Lawrence Kitchen in Hubbards at around 1:30pm.

After an absolutely delicious lunch, I got back on my bike and hit the St. Margaret’s Bay Trail. This is another 35km stretch that takes you all the way past Tantallon on the way to Halifax. Whether it was from the lunch or from the fact that I was on a trail I had at least ridden part of before, I was feeling re-energized. It also helped that the trail is well-groomed, there are regular mile markers and information boards that give you an excuse to take the occasional break. I was struck by how many of these info boards described important businesses and homes that had been destroyed by fire in the early 1900s. 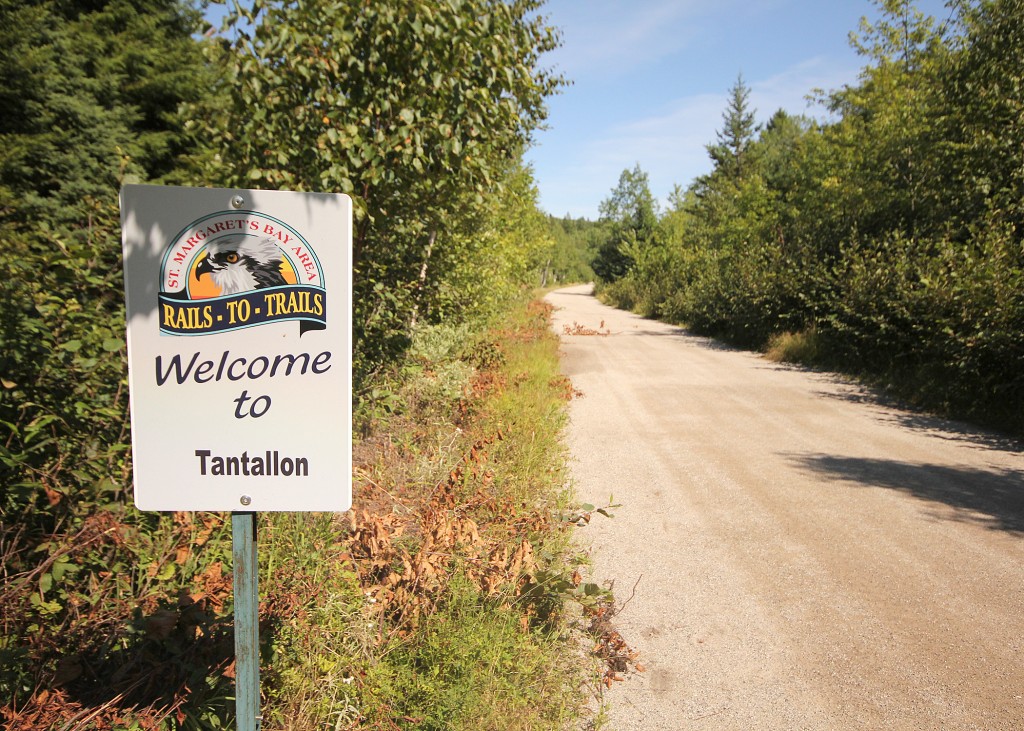 I made good time along this route and by the time I was finished this section before 4pm, I was getting my 3rd wind as I switched onto the familiar BLT Trail. You can find our descriptions of the BLT and Chain of Lakes Trails here. Needless to say, I was a happy camper when I got home around 5:30pm.

Despite a few places that could use a little extra TLC, I had a great (and challenging) ride. I had a real sense of accomplishment having used my own power to get from Lunenburg to Halifax on a 120km trek, and am looking forward to planning an overnight cycling adventure. For people who are looking to start out with a shorter distance, I would highly recommend driving to Hubbards to have lunch at the St. Lawrence Kitchen and then parking at the St. Margaret’s Bay Trailhead, then cycling to the Bike & Bean for dessert. That would be about 60km round trip on one of the nicest stretches of trail you’ll see. Happy riding!