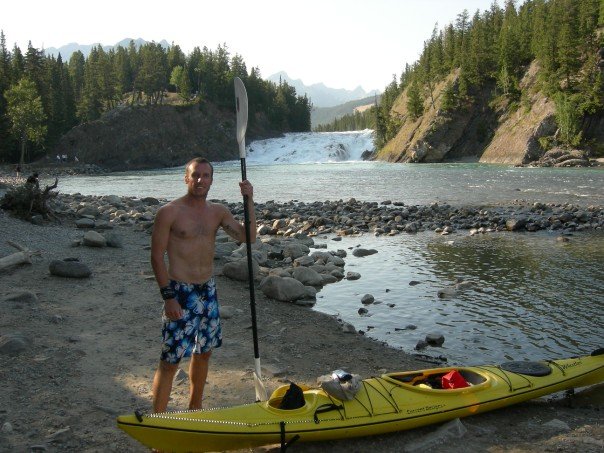 In case you’re wondering, the Badlands are not some region out of a nuclear winter post-apocalyptic story.  It is an area of southern Alberta famous for its dinosaur fossils.  As an 8 year old, I went through that coming of age dinosaur obsession that all boys go through, so I was pretty eager to spend a night in the Badlands.

Milan decided we needed to get an actual campground this time, and since I’d been washing up in lakes and gas station sinks, I wasn’t going to pass up the chance to take a shower.  Once we got settled in we went for a jog among the bluffs surrounding the campground.  We didn’t see any tyrannosaur skeletons, but it was a nice sunset jog.

Milan told me that he wanted to spend that night in Banff.  This meant that we weren’t going to travel very far that day, but I had made great time on my trans-Canada trek, the company was good and I was excited to spend a night in the Rockies (not so excited about the prospect of being breakfast for a Grizzly).

Just to rewind a little bit.  In the part one post of this adventure I covered how I spent a night at a bachelor party in Muskoka.  One of the guys there told me about his friend who had been attacked by a bear when mountain biking in Banff.the week before.  The incident had made it into national news.  Up until this point, I had only been going through black bear territory.  No biggie, we have black bears in Nova Scotia.  Now, however, we were entering Grizzly bear territory.  I was concerned.

Still, I’d heard great things about Banff so I set my fears aside.  I have a feeling that most people who have traveled across Canada will agree with me on this.  As beautiful as the St. Lawrence River, Lake Superior and the Prairies are, nothing compares to the drive into the Rocky Mountains.  Majestic, stunning and breathtaking all fall short of adequately describing them.  You just have to see them for yourself.

Once we reached Banff we poked around town for a bit.  We found a great little market area with a vendor selling bison burgers (delicious).  At the market, Milan saw a woman he found very attractive, but he was hesitant to approach her.  He told me he didn’t know how to approach Canadian women.  I told him the best thing to do is smile.  He told me people from his country don’t smile.  I asked him to try.  He tried.  He grimaced.  I told him not to smile and just be pleasant.  Their conversation didn’t last very long.

Not to let this episode bring us down, we continued touring around town until Milan spotted a mountain bike shop.  My heart skipped a beat.  He eagerly suggested we rent a couple mountain bikes.  My heart leapt into my throat.  Apparently, Milan wasn’t one for reading the news.  But, if Milan could pluck up the courage to chat up an attractive Canadian woman, I could overcome my fear of being mauled by a Grizzly, so we rented a couple bikes.

I was glad we did.  We spent a great couple hours cycling the trails around Banff and along the Bow River.  No bear sightings, much less maulings.  Since we had our blood pumping from our mountain bike excursion, we thought we could try kayaking in the Bow River.  Kayakers reading this will know immediately our error here.  Sea kayaking and white water kayaking are two very different beasts, and we were not equipped for tackling something like the Bow River.  Too bad no one was there to tell us that.

We got our kayaks into the 10*C water (no extra wetsuit for me) and got in, trying  with all of our might to paddle to the falls.  We must’ve been a sight for everyone else around.  Two guys in kayaks who were going absolutely nowhere fast.  Nowhere until Milan capsized.  Lucky for him he was wearing a wetsuit.  That was enough for us and we went to find a place to camp.

As usual, Milan slept in the back of his CRV while I set up my tent.  We were set up by a children’s playground near some kind of dormitory.  No kind of chain link fence or Great Wall of China to keep the bears out.  I lasted about an hour in my tent before I decided that huddling in my sleeping back at the summit of the playground (I think I was at the top of the slide) was a better alternative for protecting myself and sleeping soundly.  This is where Milan found me the next morning.

Refreshed, we continued through the Rockies and then into the Sierras after we crossed in British Columbia.  I’ll let the pictures speak for themselves.

Because it was dark and we wanted to avoid private property, we ended up parking in the downtown area of Pemberton.  We found a little side road coming away from a park in the middle of town.  I set up my tent there while Milan bunked down.  Feeling a little exposed by the lack of trees, I decided to move my tent.  I didn’t want to break it down and set it back up again, so I simply picked it up and walked to the main road.  Stopping behind a tree I looked up the street and saw a few Mounties standing outside their cars.  I watched them until I felt sure they were all looking in the other direction, picked up my tent, and scurried across the street to hide behind another tree.  I know that a tree isn’t effective for hiding a tent.  However, I have come to learn that people rarely see what they don’t expect to see, and I doubt these Mounties were expecting to see a guy running across the street with a 1-man dome tent.

Finally, Milan and I knew we were on our last day together.  We stopped at Whistler to get cleaned up and to check out some weird extreme sports.

By lunch time we had arrived at the ferry terminal to get to Vancouver Island, and from there to Salt Spring Island.  Milan still had a few days before his girlfriend was arriving so he wanted to check out Vancouver so we parted ways.  Regrettably, I haven’t kept in touch with him other than a couple emails back and forth right after the trip.  Maybe he’ll read this and get in touch, and maybe I’ll finally get to see that time-lapse video of our journey.

From here I had a very relaxing time on the ferry to Salt Spring, giving me a chance to reflect back on my tip across the country.  It was by far my biggest adventure at the time, and one that I would repeat in an instant.  Maybe not hitchhiking next time, but by bike or by train would be a lot of fun, too.

I spent the next week exploring Salt Spring Island with my friend, Reggie.  He showed me around and taught me how to fly fish.  I had another friend Danni who lived there, as well, so she joined us.  It’s a great place, very friendly people, interesting places to eat and hang out and a very relaxed way of life.

If you have stories of any cross-Canada adventures, please comment on this post.  In the end, it took me eight days to travel across eight provinces and it only cost me $160 (including a couple birthday pitchers and a meal and the mountain bike rental).

I’m not posting this to encourage others to hitchhike.  I encourage you to do some research into the pros and cons of all of your traveling options and make your own decision.  What I will say, is that I know or know of people who have had bad things happen to them on planes, trains, buses, in cars, cycling and walking.  I really do not consider hitchhiking any more or less safe than any other means of transportation.  Just be smart, be prepared and be alert.  But that goes for everything.