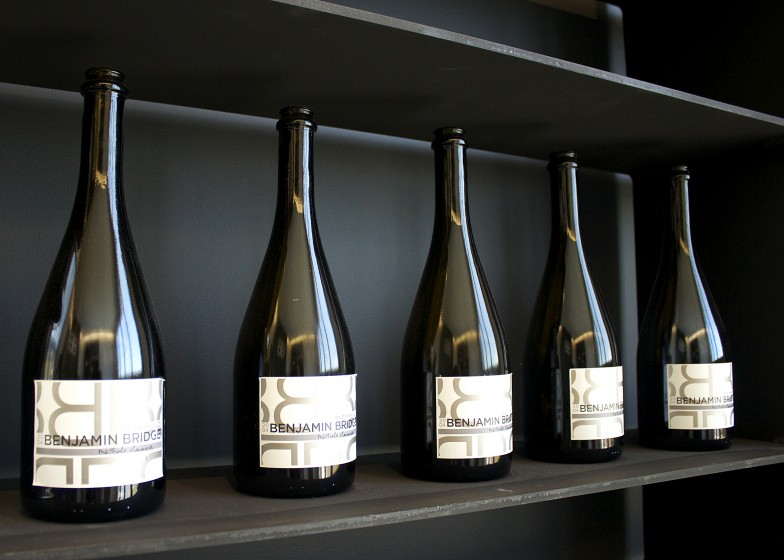 Nova Scotian wines were one of the first wines I can recall sampling. It was at a wedding when I was quite a few years younger, and my parents allowed me a small sip from their glass for a toast.  For the next few years, I hated Nova Scotian wines.

That is, until one fine day in 2009 when I happened across a tasting of Nova 7 at Bishops Cellar.  That fateful taste reopened my eyes to the world of Nova Scotian wineries.  Since that day, Nova 7 has become a good friend of mine. I hold it so dear, that when I heard that the newest vintage of Nova 7 had been released a few weeks back, I decided I would drink nothing else for all the formal gatherings leading up to my wedding, and on my wedding day.

So, imagine my delight when we found out that Jean-Benoit Deslauriers, the wine maker for Benjamin Bridge (@Benjamin_Bridge) agreed to give us a tour of the winery.   For close to two hours, Jean-Benoit artfully display his knowledge and passion for wine and wine making.

Benjamin Bridge is situated on 60 acres of picturesque property in the Annapolis Valley.  No kidding, it is easy to forget you’re not in France here (Drew used to live in France and has verified this).  They were the first Nova Scotian winery to attempt a traditional method sparkling. Planting and production started sometime close to the start of the new millennium, with the first commercial release in 2008.

The first release was the 2007 vintage, hence the name, Nova 7.  Since that first release, Benjamin Bridge Winery has been making waves in the Nova Scotia market.  Last year, Nova 7 became the first Nova Scotian wine to be sold in Ontario.

At Benjamin Bridge, the sparkling wine is created using the traditional method, with second fermentation occurring in the bottle along racks like these.

There is amazing attention to detail put into every bottle, right down to the cork.

Jean-Benoit was pure delight to listen to.  His descriptions of the wines and winery were both informative and humble.  He told us that great wines are made in the vineyard.  The less we fool around with with what the terroir naturally produces, the better the wine.

He spoke passionately about ensuring that wine is made with quality rather than quantity, paying attention to what can be done well in the area as opposed to growing our personal preferences.  That passion and respect extends to the environment at Benjamin Bridge. Not only are they certified organic, all run off to the Gaspereau River is distilled down to drinking quality, bird and other indigenous populations are monitored and there is an overall feeling of symbiosis with the surrounding environment.

All of this care is reflected best in their wines. We started with a (now sold out) bottle of 2004 Brut Reserve LD, a sparkling wine that is comparable to the top champagnes of this world.  Don’t take our word for it, we aren’t trained wine critics, but do take the opinions of Beppi Crosariol (The Globe and Mail), Anthony Gismondi (ED, Wine Access Magazine), and Bill Zacharkiw (Montreal Gazette).   I could go on all day about how good this sparking wine is, but I want to shift focus to the newest release from Benjamin Bridge, Tidal Bay.

This year’s Tidal Bay is not set to hit shelves until this coming Monday, but Jean-Benoit gave us a sneak peek.  This is the winery’s second Tidal Bay wine. The first was released last year under the ‘Vero’ title.  This year, the Benjamin Bridge Tidal Bay took home our top marks out of the NS wineries producing a Tidal Bay.  It had the perfect balance of acidity and sweetness.  It was just dry enough, just sweet enough, and just perfect for summer sipping.

While the Brut LD and Tidal Bay took our top marks, we loved every wine we sipped at Benjamin Bridge.  It was so good, that after touring nine Nova Scotian wineries in two days with the intent of writing one large wine tour post, Benjamin Bridge merited a post of their own.