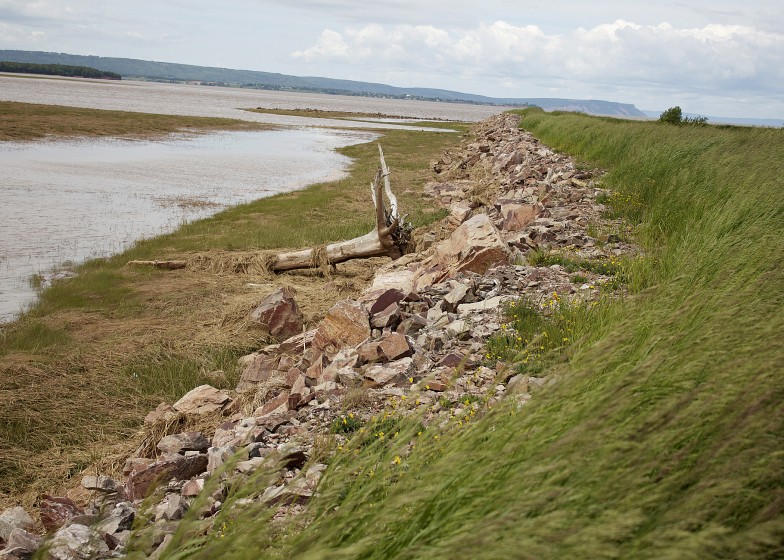 After our wedding, we had Thursday and Friday to get in a mini-Honeymoon.  We packed the car with what we would need for a potential camping trip around Guysborough and were as far as Fall River when we found out the Rare Bird Pub isn’t open for the season yet and a B&B we were interested in checking out was fully booked.  So, we did the natural thing, and turned around in the exact opposite direction to do an impromptu winery tour in the Annapolis Valley. 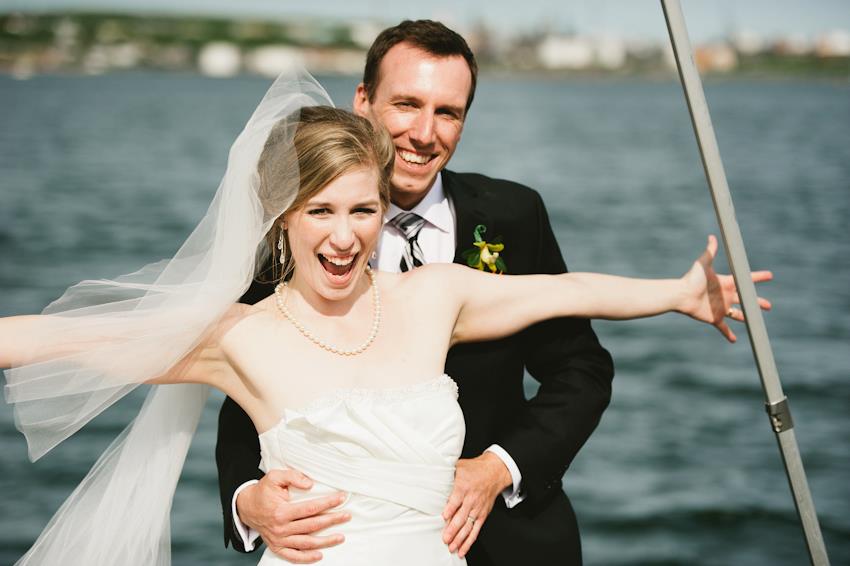 It was raining and getting to mid evening so we took refuge at the Evangeline Inn and Motel just off Exit 10 to Wolfville from Hwy 101.  The next morning we woke to a mixed sun and cloud sky and a map of the local wineries.  Looking for a little extra adventure, we mapped out a route to walk a circuit that would bring us to five wineries in a 20km loop.  We packed our bag with water and some snacks, grabbed the camera, and set off south along Grand Pré Road to Luckett Vineyards.

Within minutes we were rewarded for our decision to hoof it, greeted with sites like this unique churchyard wall and the countless shades of green in the Annapolis countryside.  We even saw a mother bird dog-fighting in the air with one of her young.  All things that we wouldn’t have been able to notice as well if we were zooming by in the car.

We had a moment of doubt in our decision to walk when we got to the massive hill that leads to Luckett Vineyards. Our doubt disappeared immediately after stepping onto their beautiful grounds.  Pete has really done a great job here, with an inviting veranda overlooking his vines.  He even set up a London-style phone booth in the middle of the field where you can make free calls to anywhere in North America.

It costs $7 to sample five wines here.  We were torn between their L’Acadie Blanc and their Tidal Bay (see here for the significance of Tidal Bay).  Pete has been criticized for putting his vineyards on a north-facing slope, but we found it did not detract from the quality of the wines in any way.  In fact, we found all five wines set the bar for the rest of the day. We’re excited to return in the winter to try the luge that is set up between the rows during ice wine harvest season.(@petestweetsNS)

The next leg of our hike was on relatively flat terrain.  It took us past Gaspereau Wool.  The grounds of L’Acadie Vineyards are pretty modest compared to Luckett, and this was matched by the owner, Pauline’s humble attitude.  She allowed us to try two of their sparkling wines for free, both of which were crisp and delightful.  The 2010 Vintage Cuvée slightly edged out the 2009 Vintage Cuvée Rosé.

While we were enjoying them, she told us about how she and her husband came across Canada from B.C. in a camper with the intent of setting up a vineyard in Nova Scotia and lived for a month on the beach while looking for the right land.  You can tell this is a labour of love for them, both in the way she spoke and in how the wine tasted. (@lacadiewine)

Next we set out for Gaspereau, taking us across the river of the same name (we hear there is great tubing here).  Our prize for reaching the halfway point of our journey was a free sampling of six of Gaspereau Vineyards’ impressive wines.

The girl working there asked us our wine preferences and took care to describe how each wine might appeal to us.  Her job was made easy by the quality of their wine.  There wasn’t one we didn’t like.  In the end, we went with their Marechal Fosh. (@gaspereauwines)

The next leg to Muir Murray Winery was our longest so we broke it up with lunch at Paddy’s Brew Pub in Wolfville.  After the killer hill leading into town, we needed the break and the food.  We’ve covered Paddy’s before, but their new local focus on their menu made us update our post, so check it out here.

This was the part of our trip where we were really happy with our decision to walk.  By car, you would reach Muir Murray from downtown Wolfville along the Evangeline Trail.  On foot, we were able to step off the main road and take the Old Dyke Road along the water.  Our muscles and spirits were recharged walking on top of the old Acadian dyke, among tall blowing grass along the Bay of Fundy.  We saw several other pedestrians, both human and canine, and cyclists to boot.

CLOSED
Before long, we reached the yellow buildings of Muir Murray (Note: Muir Murray is now closed, but rumour has it a new winery will open on the same site in 2016), and stepped inside to cool off.  Maybe it was because we’d been walking all day, but by this point we were preferring whites to reds.  However, it was their Atlantic Shore Rosé that stood out, especially when it was mentioned that it would make a great sangria.  Here we were able to each try three wines for free.  So we shared six! (@muirmurraywine)

A newborn kitten from one of the mama cats at Muir Murray.

An Ox enroute to the next winery

Our final winery of the day was Domaine de Grand Pré, and I really have to say, we saved the best for last.  Grand Pré stood out from these five for a few reasons.  Of the three that had Tidal Bay, this one was the best.  In fact, overall they had the best wine selection of the day.  Also, their grounds are spectacular.  It felt like we were on a Tuscan villa, and we would love to return to dine at their restaurant.  Finally, we enjoyed going downstairs to check out their wine museum.  Here we tried seven wines for $7, with their Tidal Bay and their Muscat coming out on top amongst stiff competition.  We were affably hosted by Catherine and Cacilia Stutz, wife of the winemaker. (@grandprewines)

From here we only had 300m to return to the Evangeline Inn.  If you choose to retrace our path, we strongly urge to go in the same direction.  This will leave the shortest leg of the trip for the end, and make it easy for you to buy a bottle at Grand Pré to take with you.  We also suggest you consider cycling.