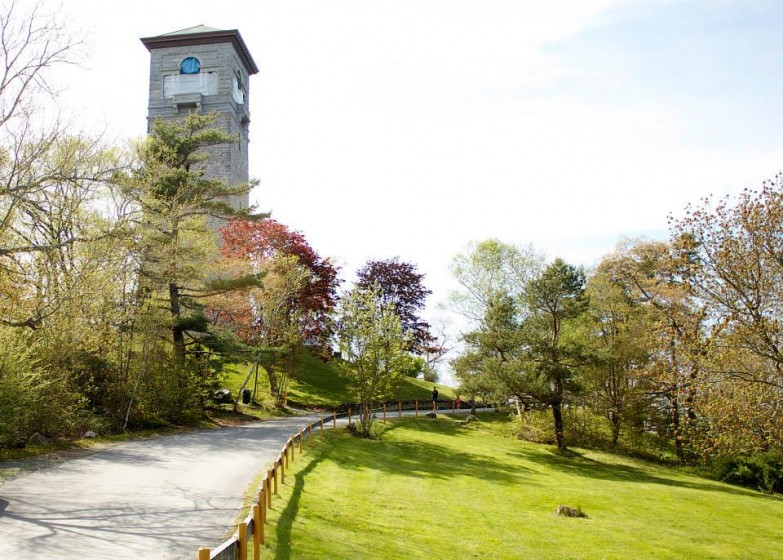 Riding the Metro Transit one day, we noticed an HRM ad that pictured three walking trails that could be reached by bus.  We thought this was a brilliant idea (props to @hfxtransit) and have been inspired to take it one step further with a series of posts on all the cool HRM sites that can be seen by bus. With summer fast on the way, we hope you’ll use these posts to plan exciting, affordable local travel this summer.  Below you will find our first post with all of the wonderful sights and activities you can reach by taking Bus Route #15 to Purcell’s Cove.

From the Mumford Terminal on, almost every stop along the Purcell’s Cove Road has something to see or do.  All of it involves being outdoors so we suggest watching the weather reports and packing a picnic lunch. Prefer to bike? Distance from spot to spot is indicated in brackets for each location.

Regatta Point: (1.7km)
As soon as you turn off the Armdale Roundabout, your very first stop will take you to Regatta Point.  If the weather isn’t cooperating, you’re at the door to @HalifaxYoga (halifaxyoga.com) and across the street from the Chocolate Lake Community Centre (www.halifax.ca/rec/centreschocolatelake).

If you want to stay outside, you have a few options. If you veer right, you are only a 2 minute walk from Chocolate Lake (www.halifax.ca/rec/beachers.html) with its small, but very popular sand beach. Stay left and you’ll find some terrific walking trails along the Northwest Arm.  While in the area we recommend treating yourself to pie, for both supper and dessert, at Heppy’s (www.heppys.com).

Entrance to the trails along the North West Arm.

The Dingle: (3.5 km)
A little further up the road, hop off the stop in front of J.W. MacLeod Elementary School.  Across the street is the entrance to Sandford Fleming Park (www.halifaxtrails.ca/index_files/FlemingPark), featuring the Dingle, picnic areas with tables, a children’s playground by the water and Pinky’s ice cream shop.  There is also a small beach. The water is very rocky in this area so if you plan to go in, bring water proof footwear.

The Dingle Tower has been closed for renovations but is set to re-open in August 2012.

Whimsical Lake: (3.8km)
One more stop and you’ll be at Whimsical Lake. This small beach is also home to a playground for the kids. In the winter, it is a great spot to go skating provided that the weather is cold enough.

Frog Pond: (3.7km)
Next stop, Frog Pond (www.halifax.ca/rec/TrailsHalifax.html).  It’s about a 25 minute walk along the trail, unless you’re a duck-lover and are easily distracted.  If so, you might spend an afternoon here looking at the ducks and squirrels, or interacting with the many other walkers.

A mid-trail view of the Frog Pond

Williams Lake: (4.5km)
Frog Pond probably wouldn’t make for the best place to cool off with a swim, but if you cross the street you’ll find the main entrance to Williams Lake. If you hold out a little longer on the bus you’ll also find a few less crowded spots to go for a dip.

The main entrance to Williams Lake. There is a small beach here, too!

There is another swimming hole along this route, but the locals like to keep it to themselves so we’re going to sew our lips shut on that one.  If you know it, you know, but please keep in mind that camping is prohibited there.

Pond Playhouse:
In this area you will also find the Pond Playhouse, one of two theaters owned by the Theater Arts Guild (@TAGTheater1). They hold shows from September to July. Check out their schedule here: http://www.tagtheatre.com/html/season2011-12.html

York Redoubt: (9.8km)
That brings us to the York Redoubt, which is at the end of route #15.  Before you get there you will see plenty of evidence of the damage caused by the Spryfield fire from 2009.  York Redoubt is a national historic site.  It was part of the same network of forts to guard the harbour as the Citadel and today features the World War II Command Centre.  It offers much of the same sense of visiting an historical site as Citadel Hill, but it’s free!

On the grounds of York Redoubt – a great spot for a picnic or a game of capture the flag.

The Look-Off: (13.1km)
This may be the end of the road for the #15, but it doesn’t have to be for you.  This route features bike racks so throw your bike on and get ready for a relaxing ride.  There are no bike lanes this far out but the road is lightly traveled so it is very cycle-friendly, unless you get distracted by the incredible view from the Look-off in Herring Cove.  We recommend getting off your bike and sitting down to enjoy this panoramic vista of the ocean, or walking the trails.

The trails at the Look-Off

Note for cyclists: we’ve added distances from Mumford Terminal. There is an outbound bike lane as far as Purcell’s Cove and a partial inbound lane from there. No bike lanes past there but the road is less heavily traveled. Watch out for speeders though. Terrain is pretty hilly and a little windy, nothing to scare off casual riders but enough to make an enjoyable ride for serious cyclists

Want More Adventures in Halifax By Bus? Check out our series on beaches, hiking and history, just a bis ride away.