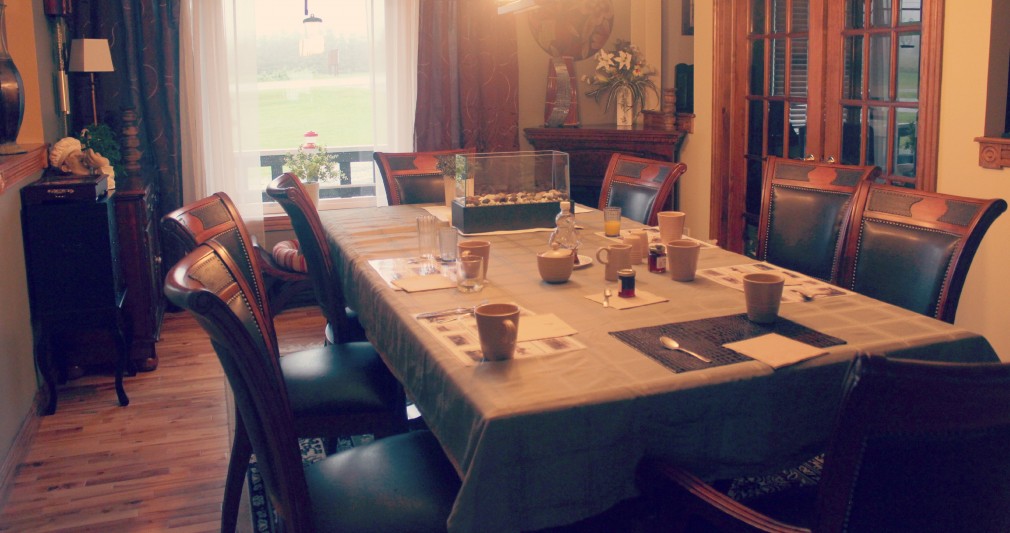 After a mistaken double booking at the Best Western Woodstock, we found ourselves faced with a bit of an unexpected adventure. It was 11 pm, and due to extra accomodation traffic from the U2 concert in Moncton, our options were narrow. The Best Western Woodstock made a few frantic phonecalls, and eventually found us a room at a little B&B called Brigette’s. We were traveling with family, and though we like to think of ourselves as the adventurous types, not all of our family members are as open to broadening their horizons.  However, we were stuck, and after a 15 minute drive down a dark country road with the female half’s mother calling all of her sisters to let them know where we were going in case we were never heard from again, we reached Brigitte’s.

Named after the owner, Brigitte’s Bed and Breakfast is a 5 room B&B in a modern style home.  The front of the house is deceiving, hiding both the size and splendor of the house.  There are three common areas indoors, including a large bar area complete with pool table and dartboards.  The guest rooms are decorated with themes from different countries, and the semi-private bathrooms were done in white tile and chocolate brown accents, nearly spa-like.  To top it off, there is a large outdoor pool with patio area and tiki bar. Breakfasts can range from yogurt and berries to a full eggs, bacon, ham and toast spread, depending on your preference.

One of the best parts of this trip was having the opportunity to meet Brigitte and her husband, one of the nicest couples we have had the pleasure to meet. We were sad that we were only in Woodstock for the night. Brigitte’s would make for a great weekend or week long retreat with friends or co-workers (they hold many corporate meetings). And, with rooms starting at $65 a night (including breakfast), Brigitte’s is sure to become a repeat destination for us.