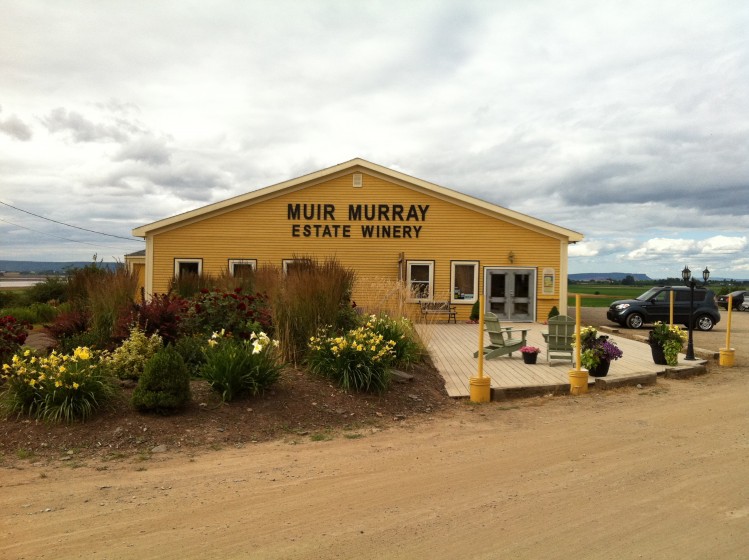 Carl Sparks purchased Muir Murray in September 2013. Carl is the owner of Devonian Coast, who recently acquired Jost and Gaspereau. According to Wines of Canada, the Muir Murray site will re-open under the new name, Mercator Wine. This has not been confirmed by Devonian Coast. Devonian Coast does currently have two wines under the Mercator label available at the NSLC. You can read about our experiences at the original Muir Murray below!

Wolfville and Kentville are lovely spots to plan a day-long get-away over the summer. A 45 minute drive from the city and you are surrounded by farmers markets, U-picks aplenty, and most importantly, winery’s.

Last Sunday, my sister, her good friend and I headed to Wolfville to check out Muir Murray Winery. Muir Murray is a relatively new winery to Nova Scotia. It officially opened on July 3, 2009. The owner is a former surgeon who moved to Nova Scotia after retiring at 51. Today, the winery has received awards for both a number of their wines as well as from the Halifax Chamber, taking silver in the Best New Business of the Year category at the Halifax Business awards.

We were delayed getting out of the city (that too-good-to-resist David’s tea deal held me up), so we missed the official tour. Lydia, the representative on site that day, helped us make our way around the extensive list of wines. The wines were organized from dry to sweet in each category. I started with a sweeter wine, thinking I would end up favoring the dry but my first sample ended up taking the cake. The winning white was Riches of Life, made from “Riesling” grapes. The website describes it as being rich with nuances of citrus, tropical fruit, honeydew melon, and a hint of minerality. I found it to be light and clean tasting, lovely to drink on it’s own but I can see it pairing well with some cheese or seafood. I purchased both the Riches of Life, and a 2010 Ice Wine called Solstice Ice.

Since we missed the tour we did a bit of self directed site seeing. The property was beautiful, and we saw a wedding tent set up from a wedding in the vineyard the previous day. It was a lovely way to spend a Sunday afternoon.

If you plan to head up for a visit, wine tours start at 11, 1 and 3 from May to September. You can sample without taking the tour. Your first 5 samples are free, excluding their ice wines which are $5 per one ounce sample.