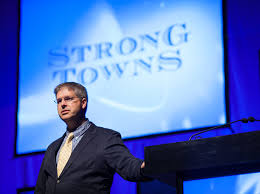 On Wednesday, I was lucky to attend both a walking tour and a public lecture with Chuck Marohn, president of Strong Towns. Chuck was in town for one day, and in that short time he delivered two lectures, a walking tour and was a guest on Global Morning. That’s a busy visit, but not out of the ordinary.  Most years Chuck does over 50 events across North America. He likes to stay busy when he’s on the road, trying to reach as many people as possible with his message. While he’s not yet a household name, he is a star in the world of urban planning and city building. Strong Towns’ website has millions of visitors a year, and Chuck is invited to present at major conferences. Planetizen ranked him one of the top 10 cities builders of all-time, especially impressive since he’s only had a public profile for a decade or so.

I could write a dozen blog posts about the Strong Towns’ ideas that Chuck champions. A dozen blog posts might scratch the surface. Chuck’s ideas are a huge influence, and I’ll be shocked if I don’t come back to his ideas again and again. He had lots of important, provocative things to say. But two things he said stood out: “I don’t know” and “It didn’t work out like we expected”. He said some variant of these things over and over.

Chuck does not say “I don’t know” out of ignorance. He reads widely and he thinks deeply about cities and towns. He visits towns and cities across North America, and keeps in touch with other leaders in his field. Chuck knows a lot about how cities and towns work. He has big ideas about how to grow strong cities and towns. But, there’s a lot that he doesn’t know. And he admits it freely, tries to provide the insights he can, and asks questions to get closer to the answers. Chuck would prefer more engineers, architects, planners and politicians realized how much we don’t know. It would open up conversations and help connect with the hidden knowledge, ideas and energy in all our communities.

I began writing again because I’m worried about how we plan our towns and cities. I have some technical concerns, but I’m most skeptical about our overall approach to planning. We know what is good: density, diversity, small businesses, transit. We know what is bad: sprawl, big box stores and monotony. We know these things with a certainty that is scary, a certainty that blinds planning to our shallow truisms. We know how to create thick plans: land use plans; transportation plans; recreation plans; climate action plans; heritage plans; and cultural plans. These are critical topics, and we do need to plan. But too often the planning is heavy handed and sucks the life out of a place. The planning brushes aside small opportunities and the goals and needs of residents. If you plan it all in advance there are fewer chances to experiment, to play, to change course. Planning everything in advance is an act of hubris, the opposite of admitting that often, we don’t know.

I’m glad Chuck was able to come to Halifax, and hope we can host him in the future. The Strong Towns message – fiscal discipline, local solutions, smart investments, incremental growth, long-term thinking – sparked an inspiring dialogue about our city. Chuck knows a lot, and is gracious with his knowledge. But his strongest message, to me, was about not knowing. It’s nothing to be afraid of. Not knowing is honest. Not knowing opens up debate and options. It lets non-experts into the dialogue. It forces us to confront big questions and lets us think big.

I don’t know where this dialogue will lead, but it’s going to be an exciting journey.