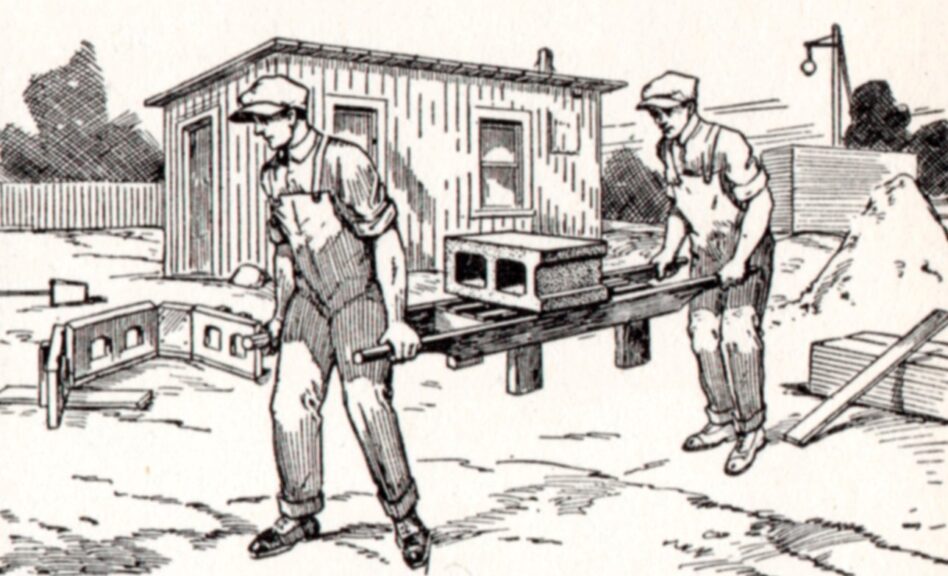 Are you running low on fun things to notice? How about concrete block? Not the blocks, painted beige or peach, often used as the walls of 1960s school gyms and church halls, but those cast to imitate rustic stone, that were popular from around 1900 into the 1920s. 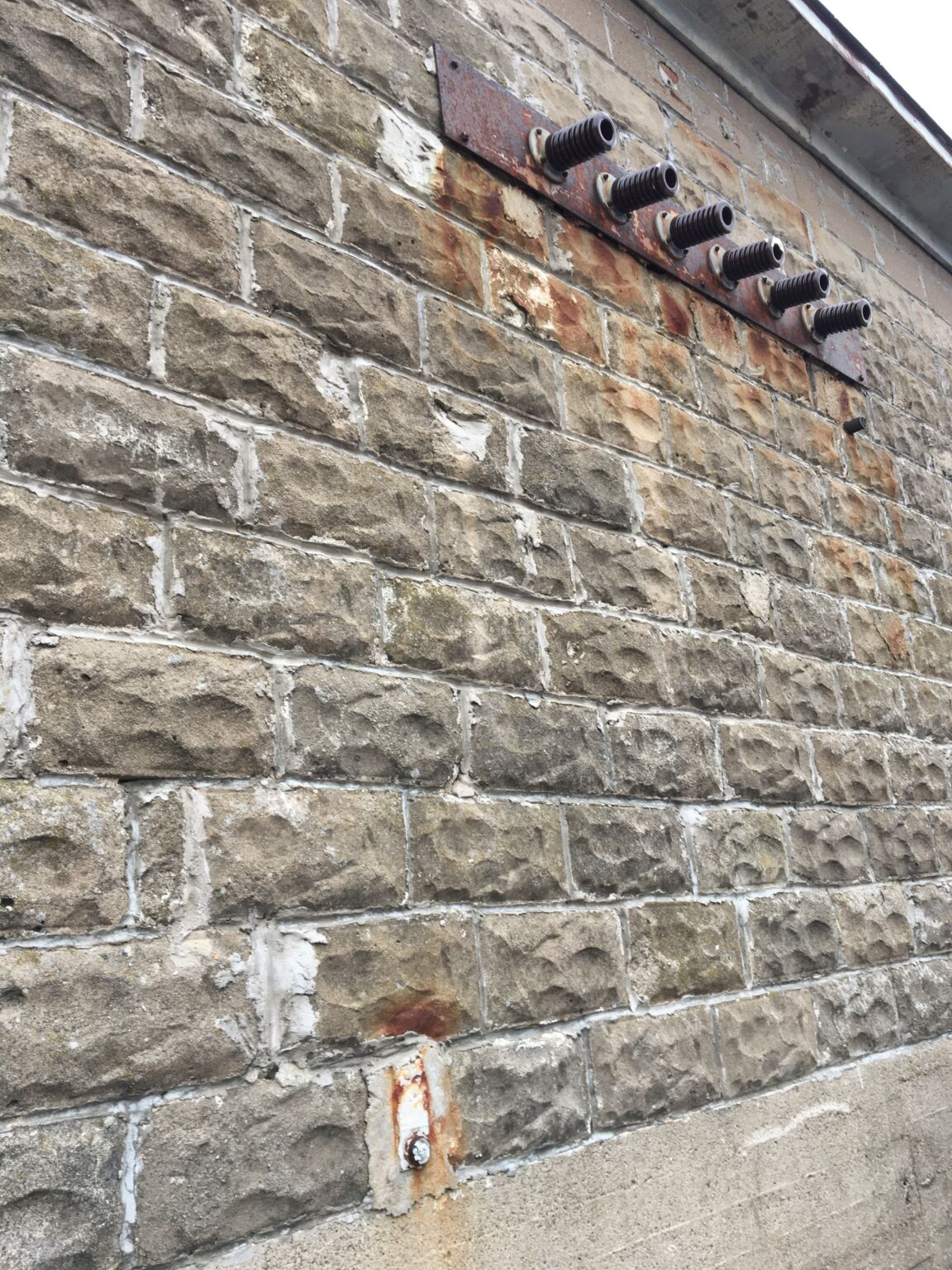 Do you recognize the look? If the same mould was used for all the blocks, the repetition can be disturbing. 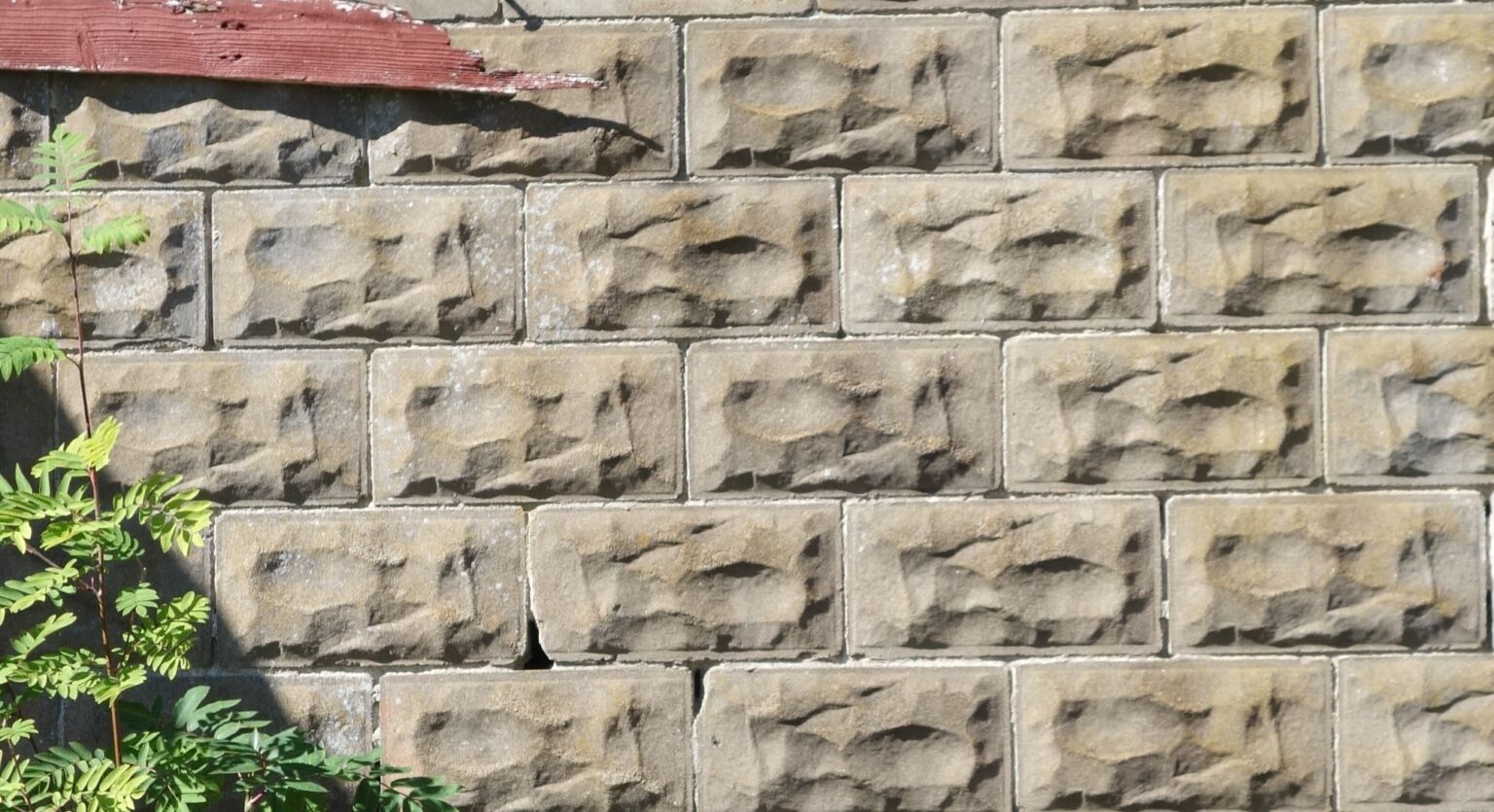 If the concrete became grimy over the decades, it was often painted, and is now concealed under layers of paint. 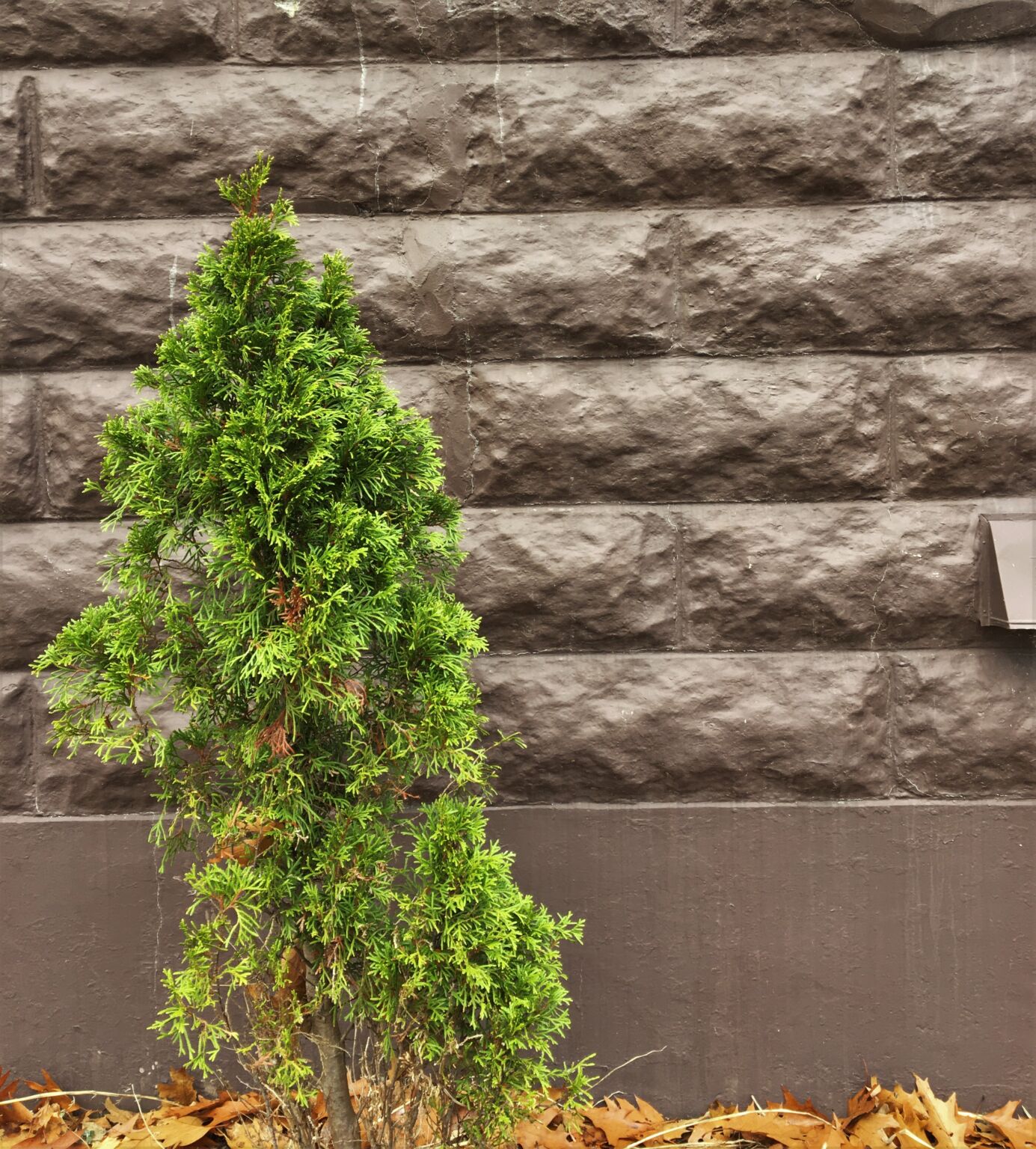 The Lights of Town (while stopped at)

In Halifax there are several corners where you can conveniently observe these concrete delights while waiting for the traffic lights to change. At Windsor and Almon our favourite restaurant, the Brooklyn Warehouse, is a fine example, with alternating rows of rock-faced and plain concrete block. The striped effect is maybe too striped? 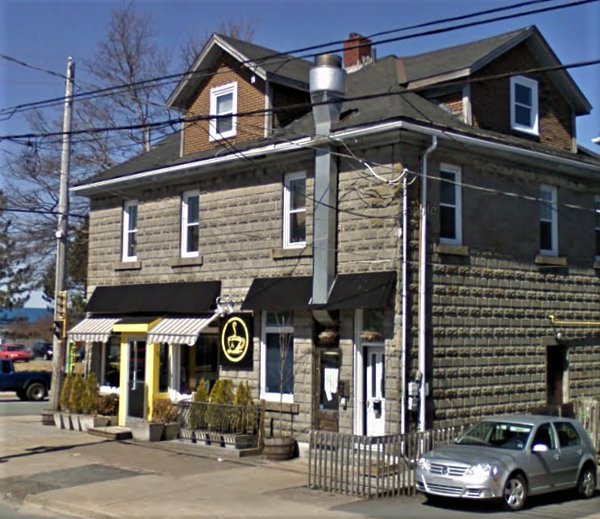 If traffic is backed up on Jubilee at Oxford you may get a moment to observe attractive concrete block veranda supports. This was one of the most tasteful uses of the product, in my opinion. 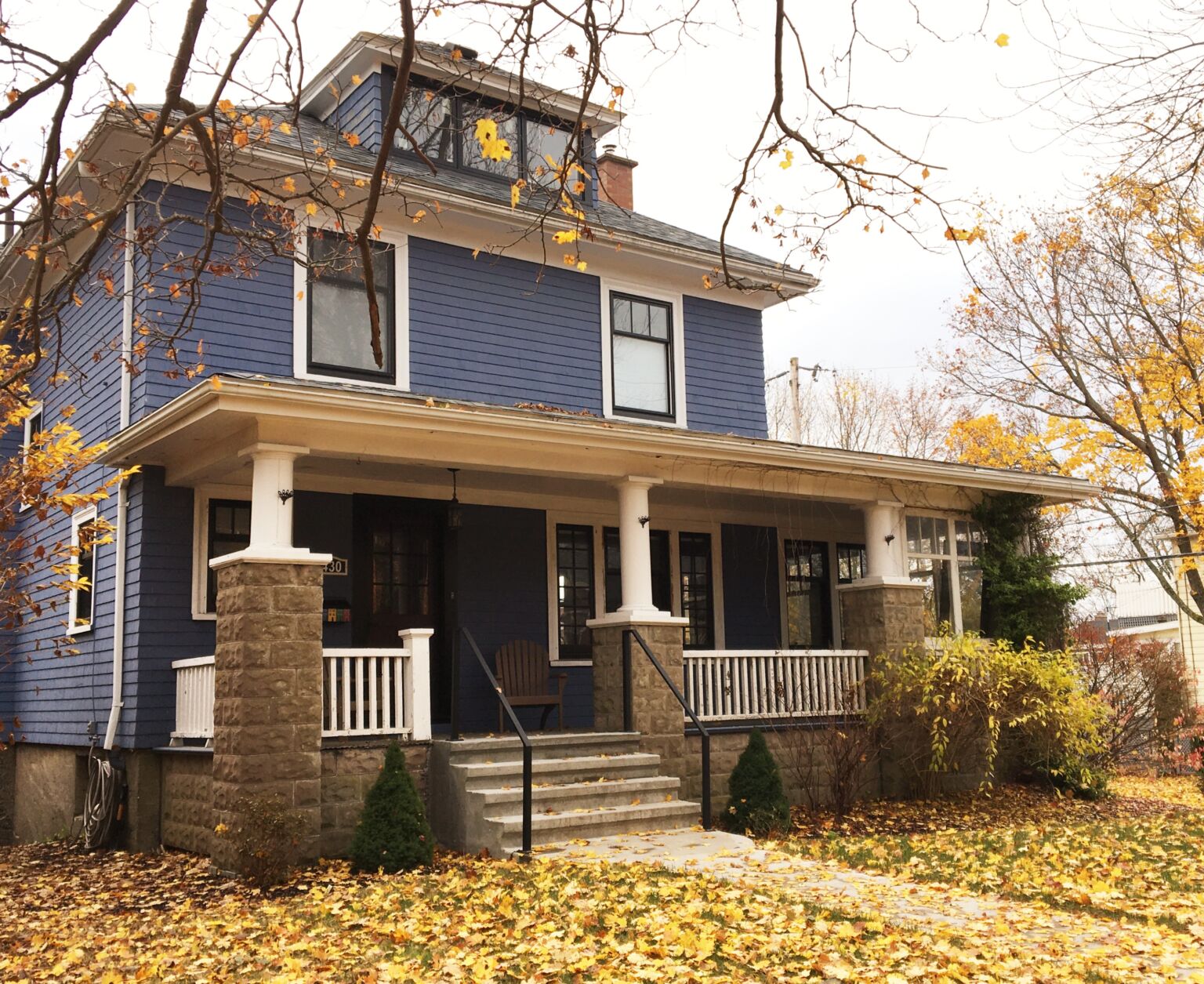 On Robie at Spring Garden there are more veranda supports. What do you think? So many reasons not to glance at your phone while at the lights. 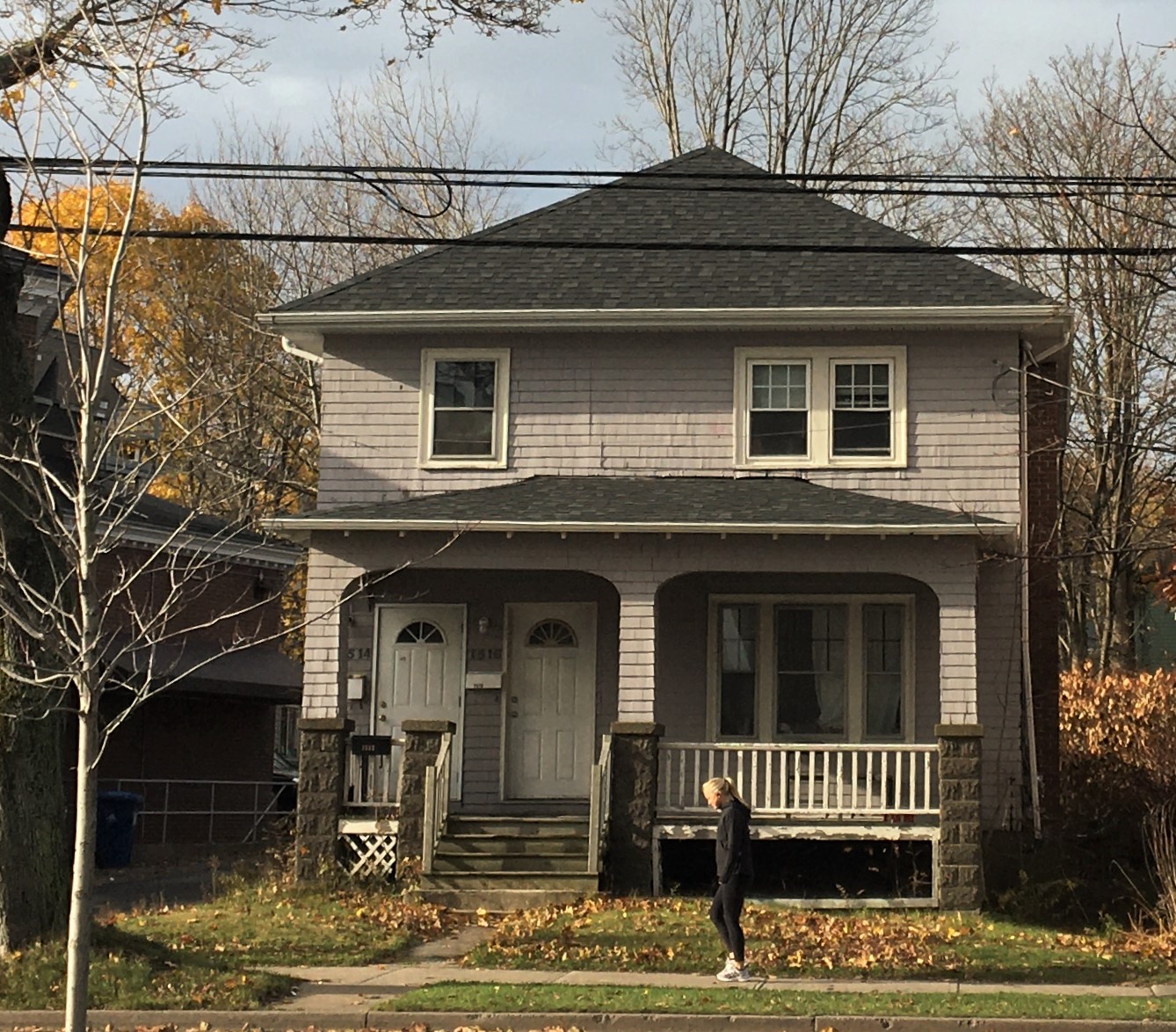 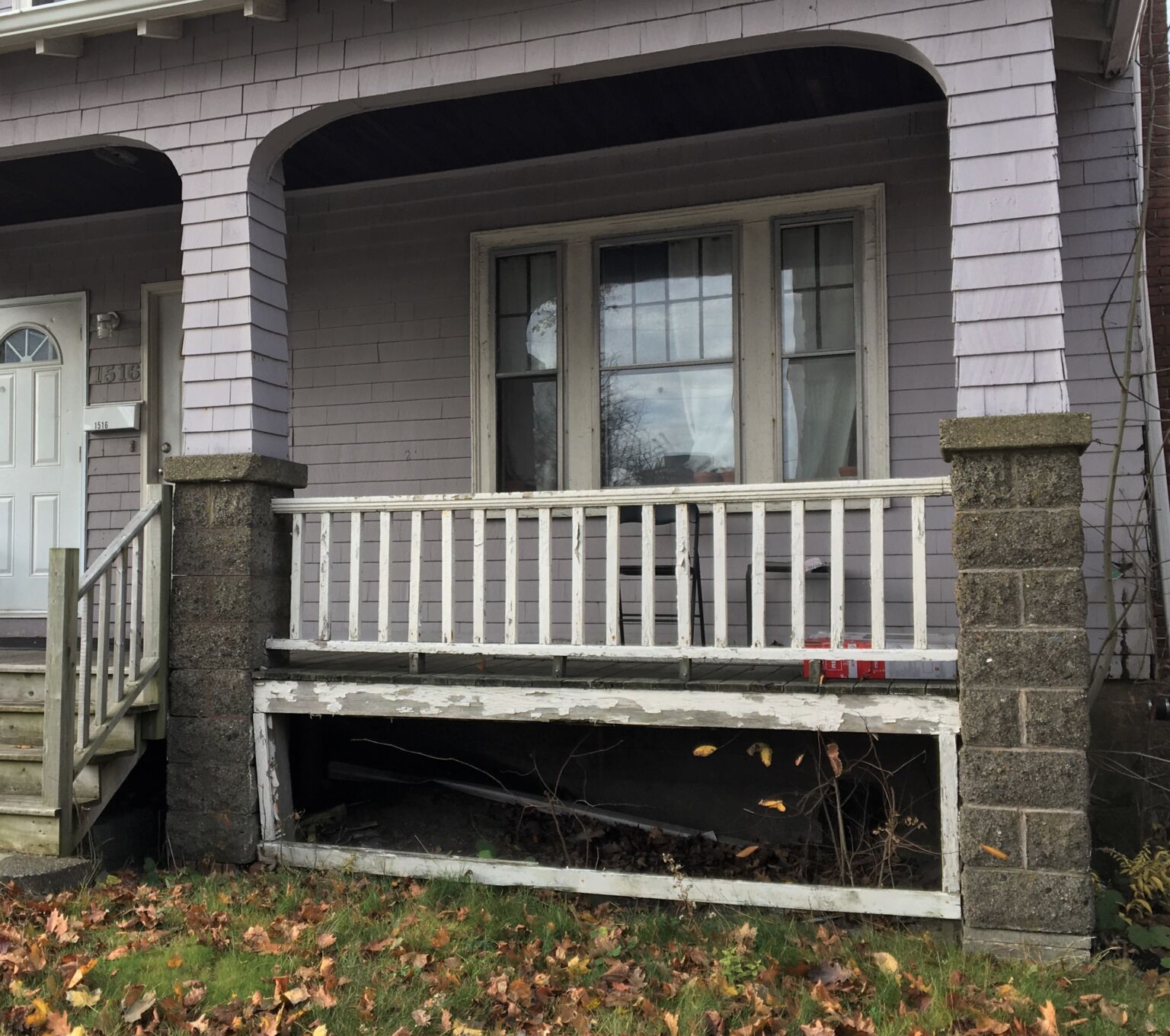 These rock-faced hollow concrete blocks were popular at a time when the modern interest in building with concrete was in its infancy. Often the blocks were made on a construction site by the builder, using a hand-operated moulding machine. These devices were sold by the big mail order companies and had encouraging brand names like the Wizard and the Triumph. With a concrete mixer and a strong back, you could make a 100 blocks a day or more.

The rock-faced block designs I’ve seen in Nova Scotia are all fairly similar, but catalogues show that there were many options. 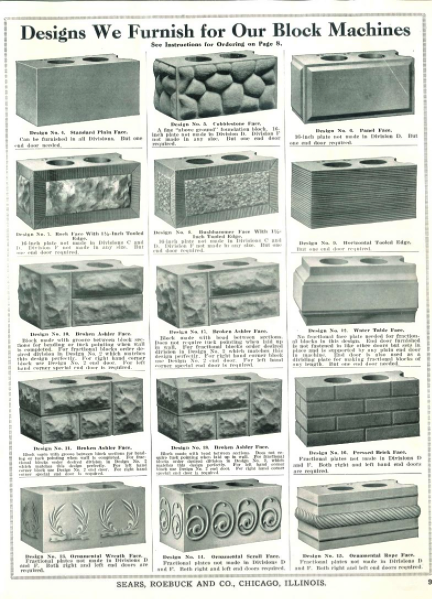 Blocks in two designs and two sizes were used in this Kentville foundation. 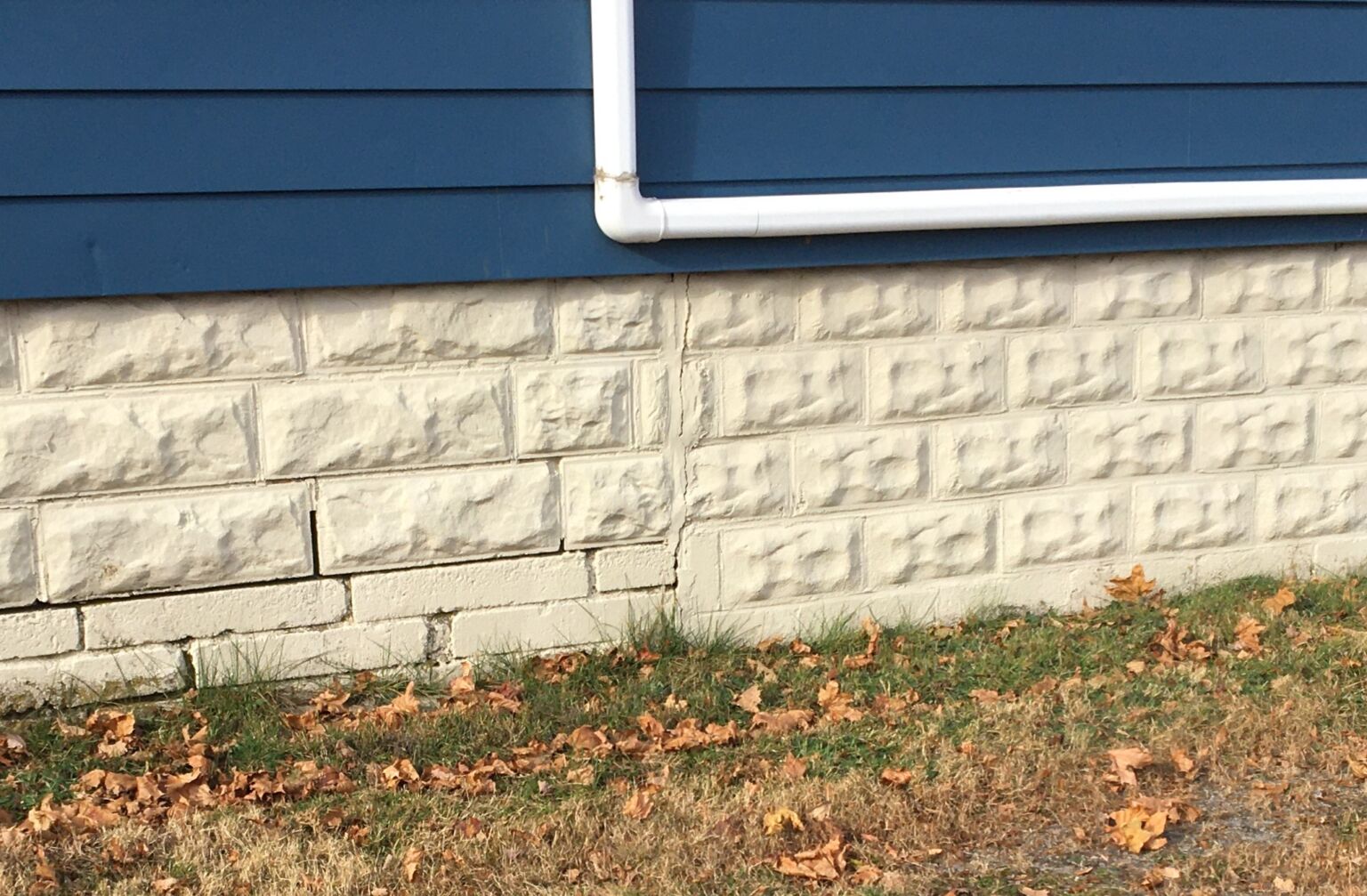 A Gallery of Delights

Rockfaced concrete blocks are satisfying to notice because they do pop up all over the province, and all over the continent for that matter. These examples show some of the variety that awaits you.

A commercial building in Kentville. 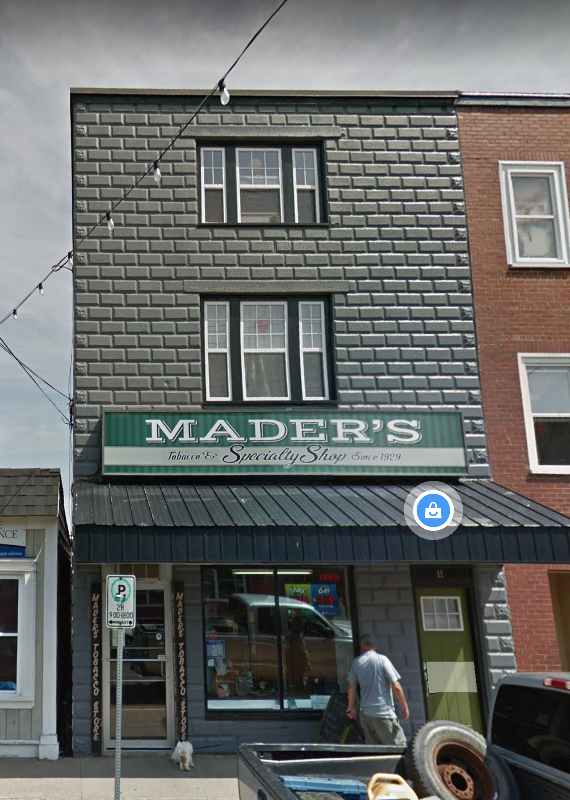 An industrial building in Middleton. 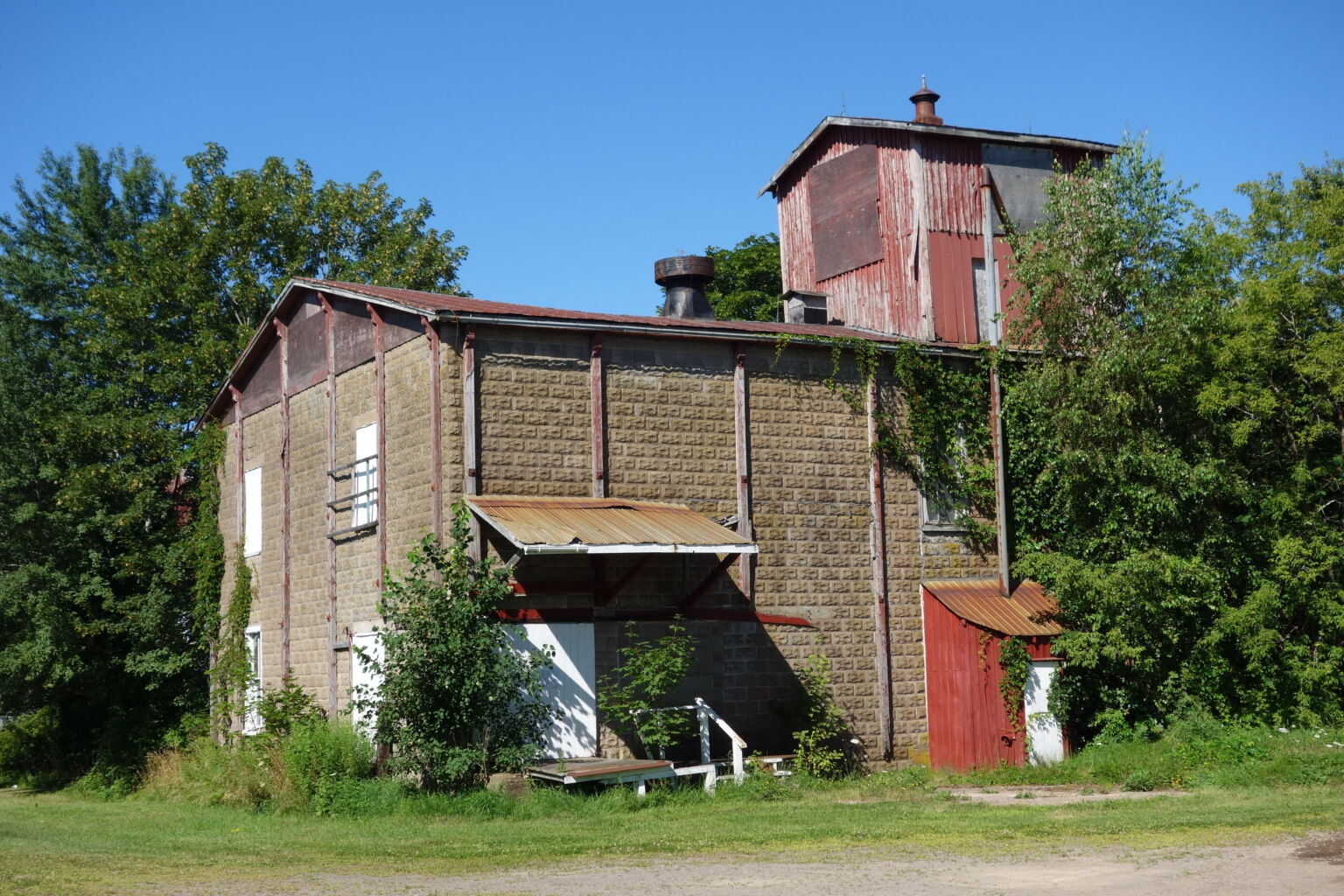 Built to house electrical transformers for the town of Wolfville, this shed now stores road salt. Apparently these blocks were first used in an earlier building that was disassembled. 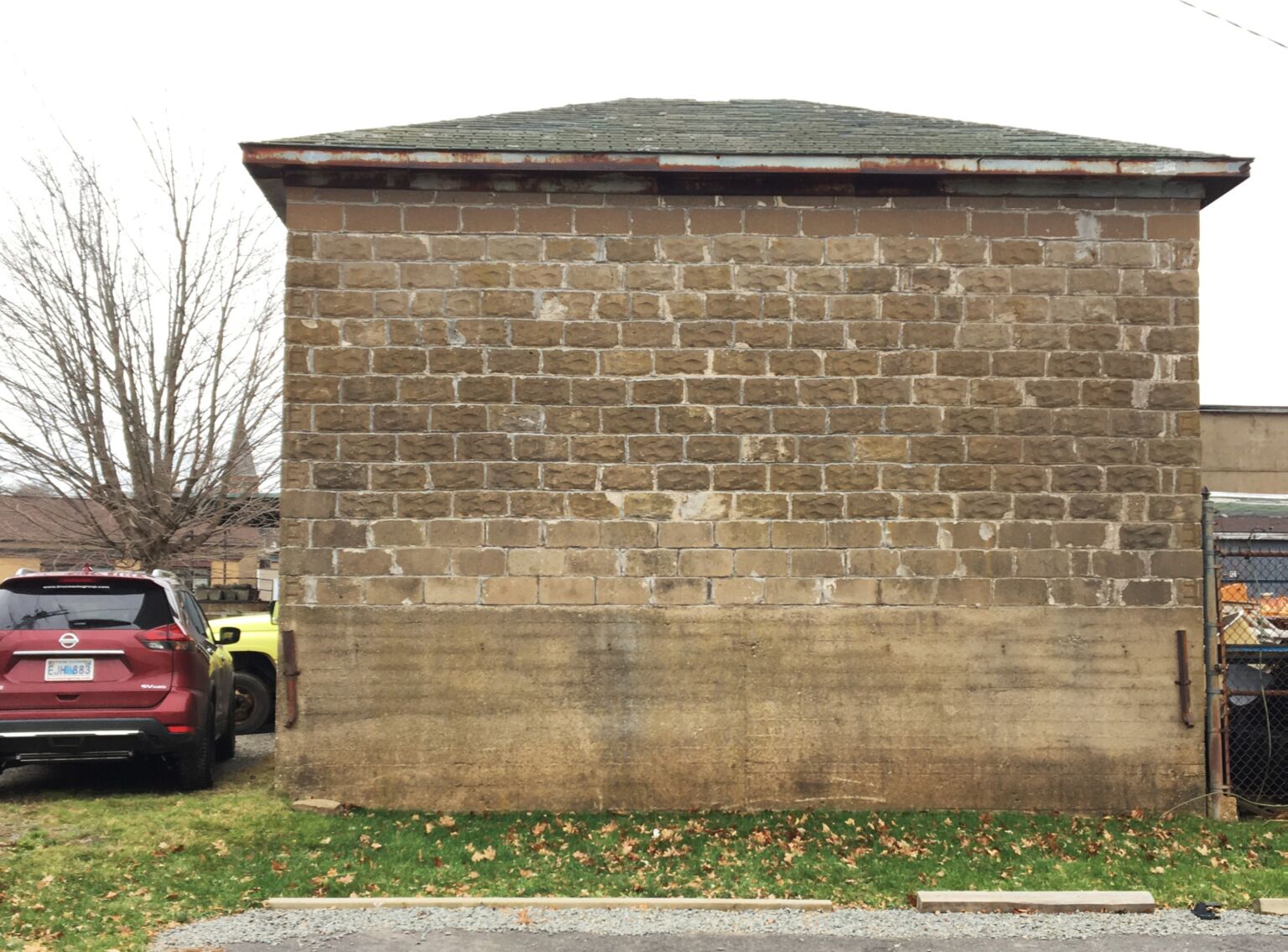 A picturesque garage on Coburg Road. The fireproof quality of concrete made it popular for these little buildings needed to house new-fangled, gasoline-filled automobiles. 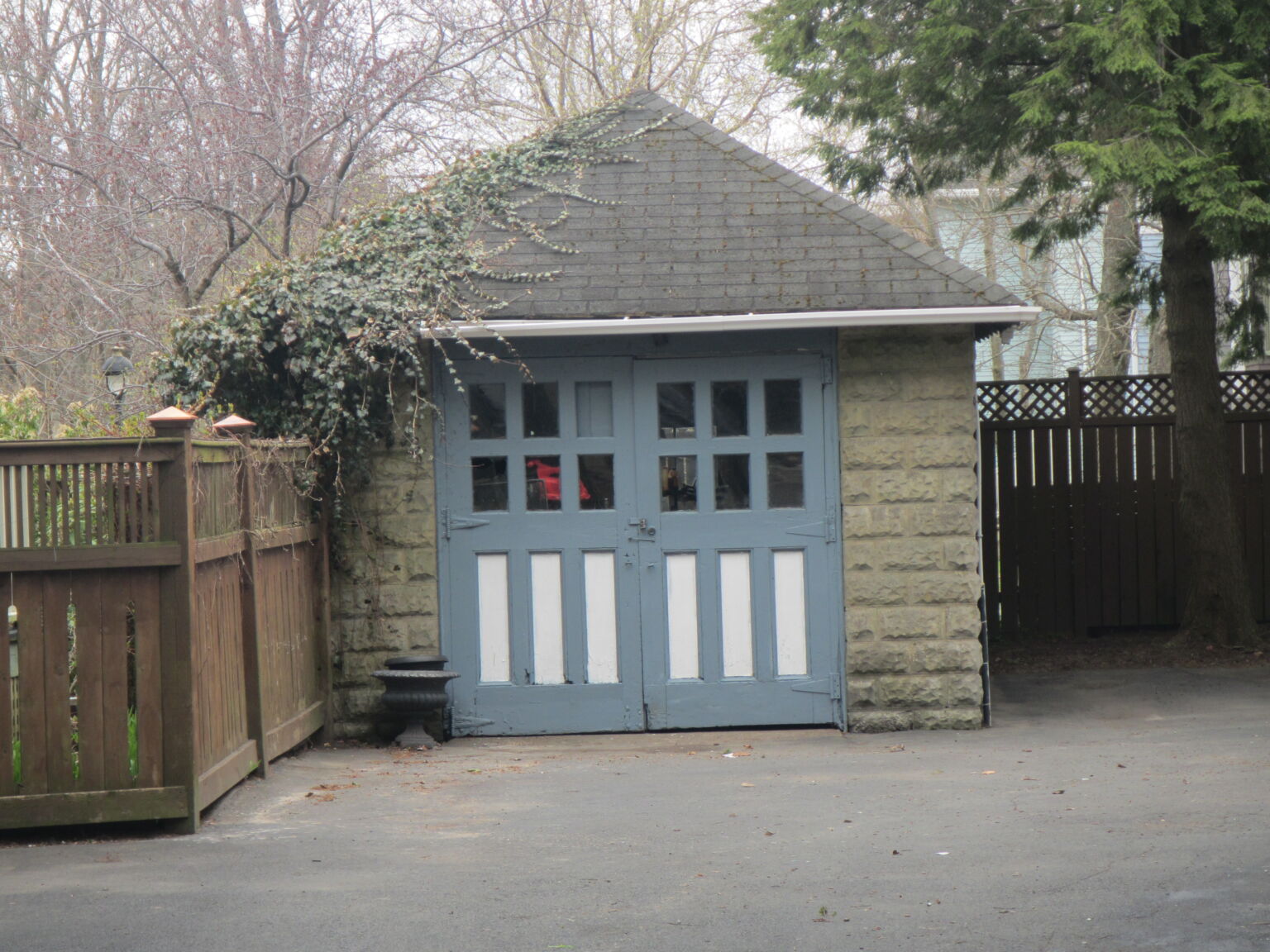 When rock-faced concrete block was used by talented architects and builders, the results were buildings that do not scream “concrete block.” The 1907 Brander Morris Building (that used to house Attica) on Barrington Street is an excellent example. And beautifully restored too. 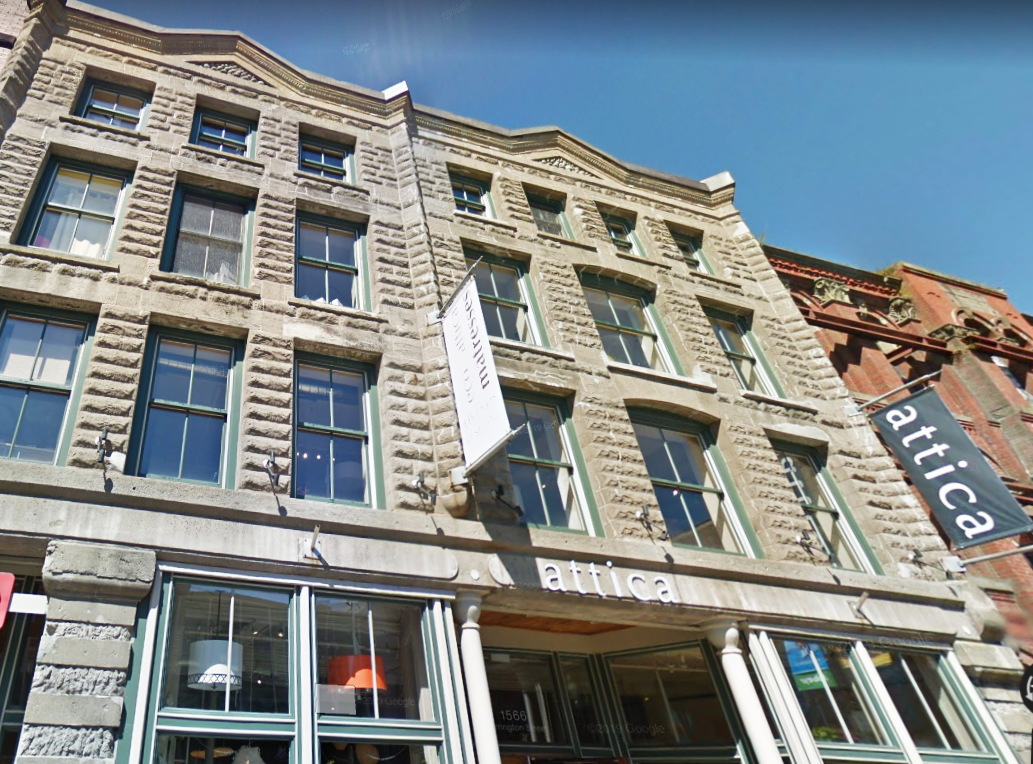 The 1906 chateau-esque Maritime Business College on College Street is now lost. It was made of “cinder block”: the aggregate in the concrete was cinder from the Sydney Steel Mill! The architect here was William Critchlow Harris. 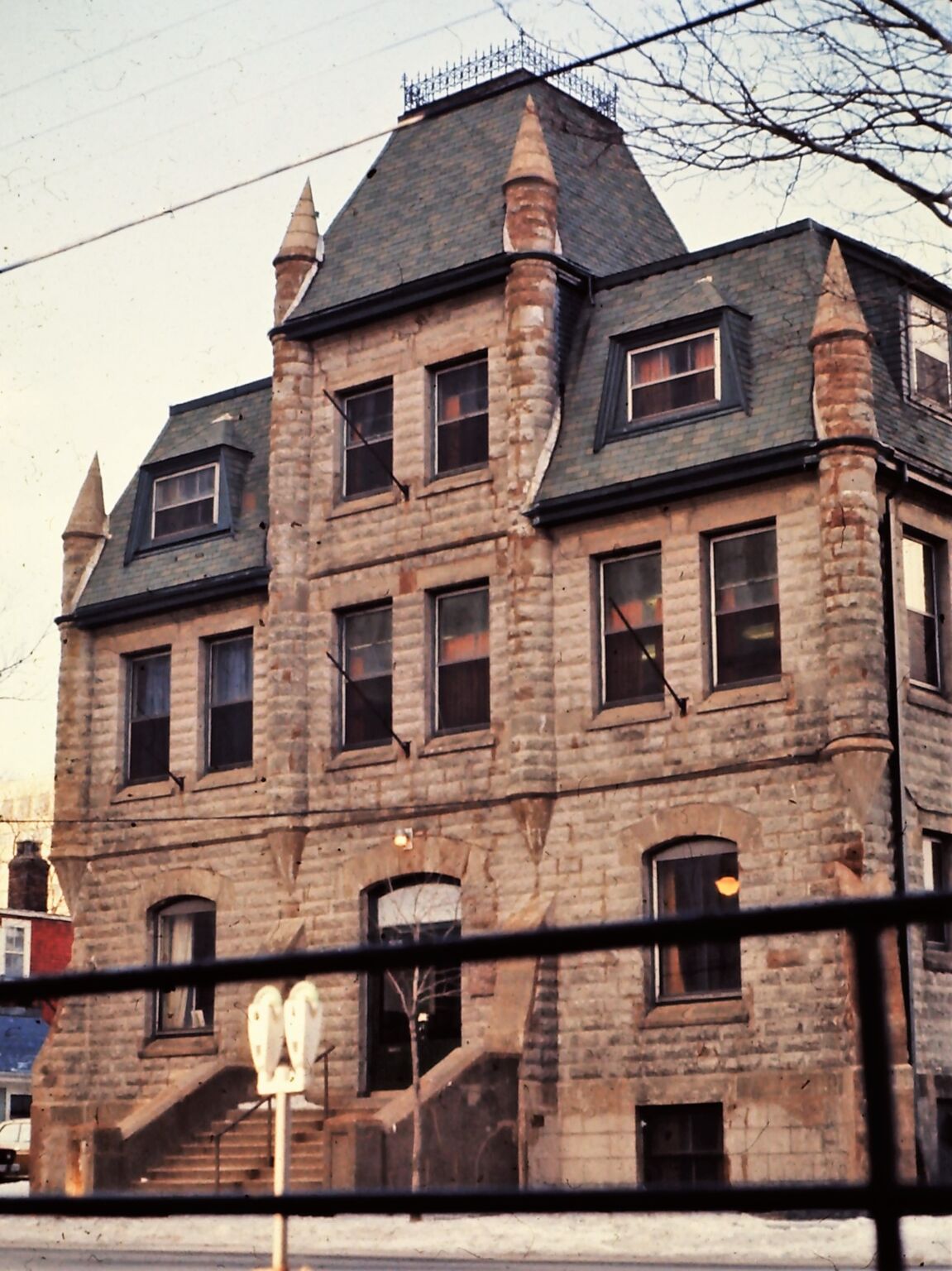 The most delightful rock-faced concrete houses I can think of are in a cluster at the north end of Henry Street in Halifax. They are beautifully detailed and look like houses from somewhere else. I don’t know their story, but I’m sure there is one. 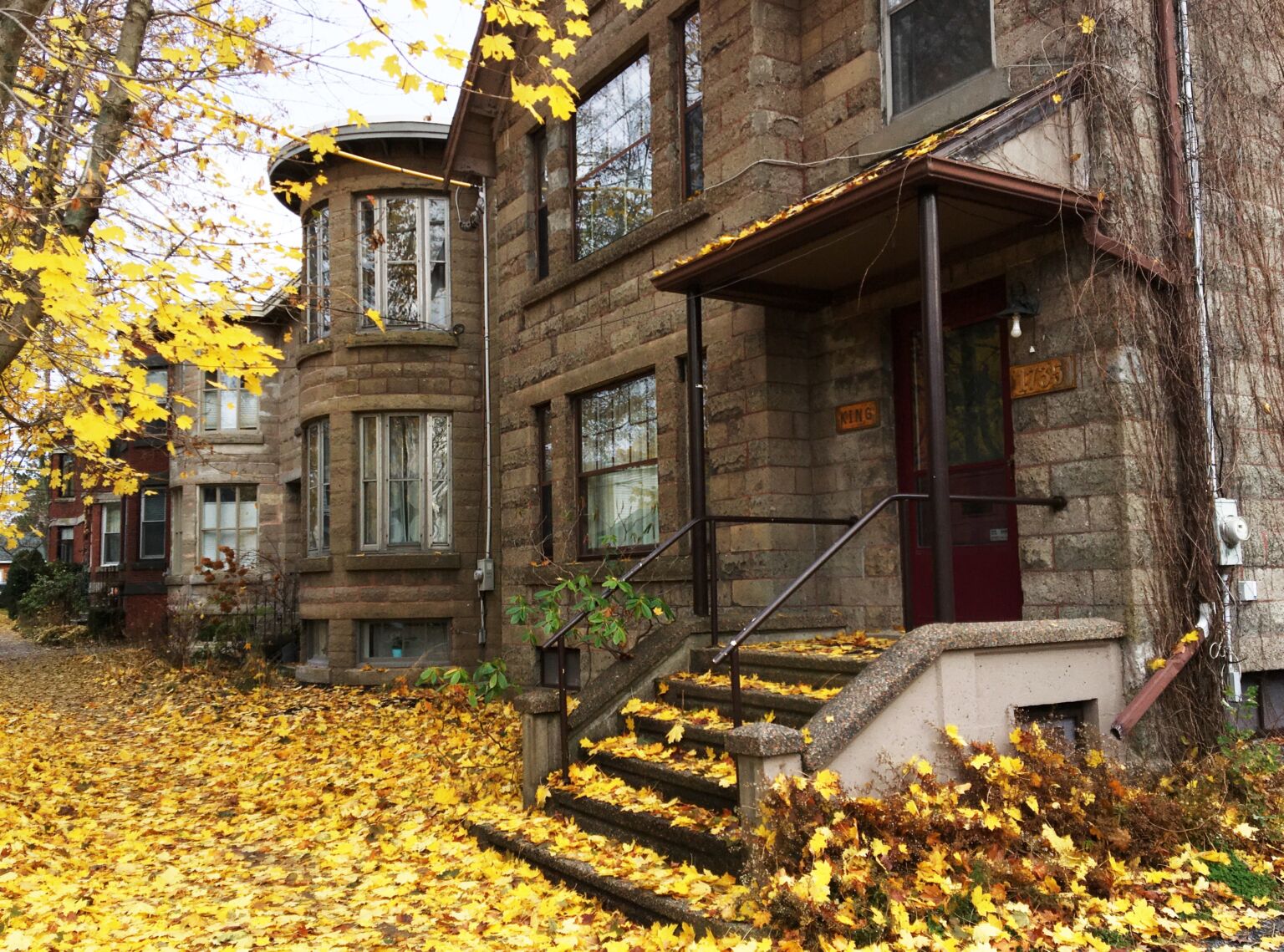 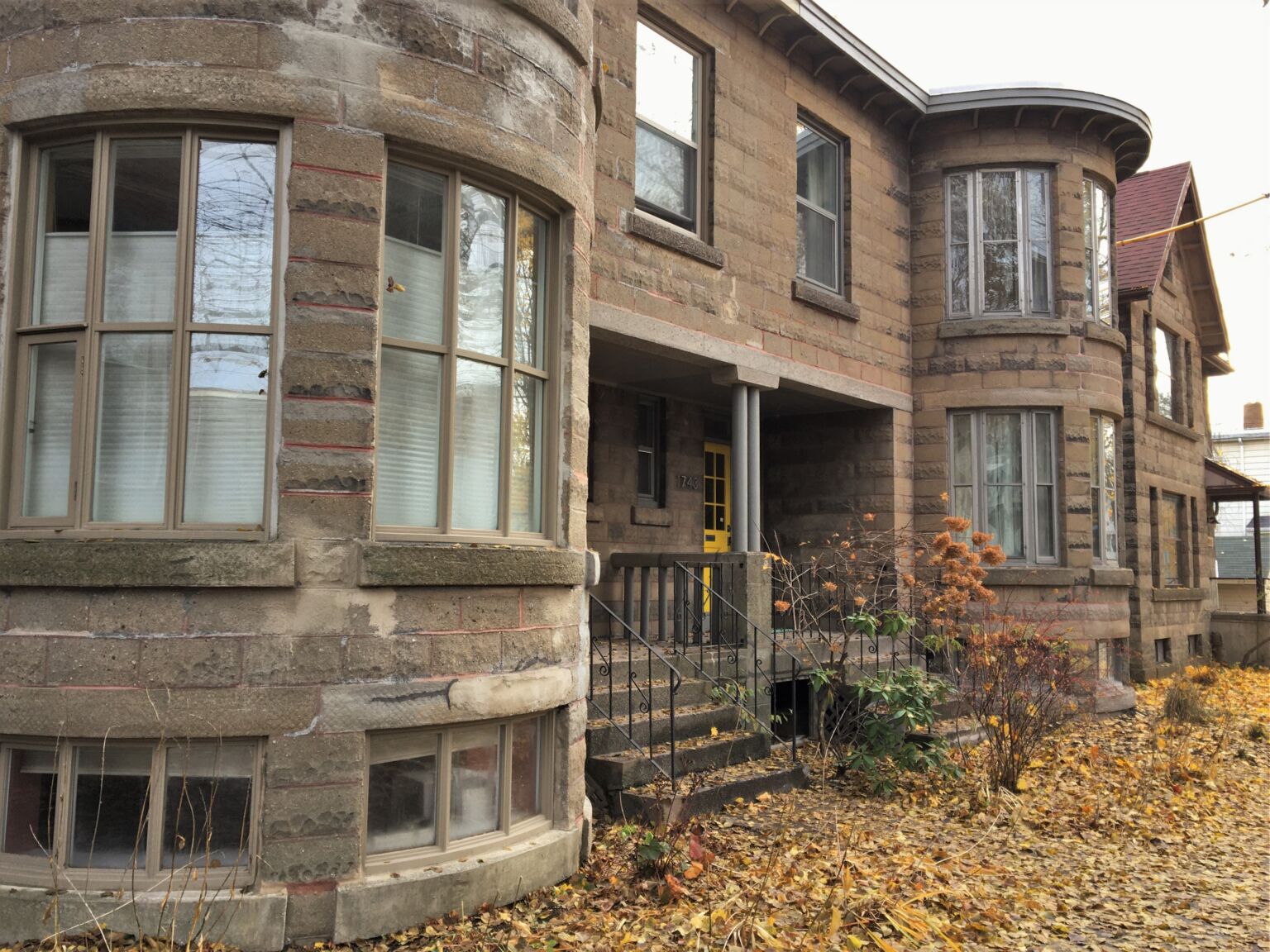 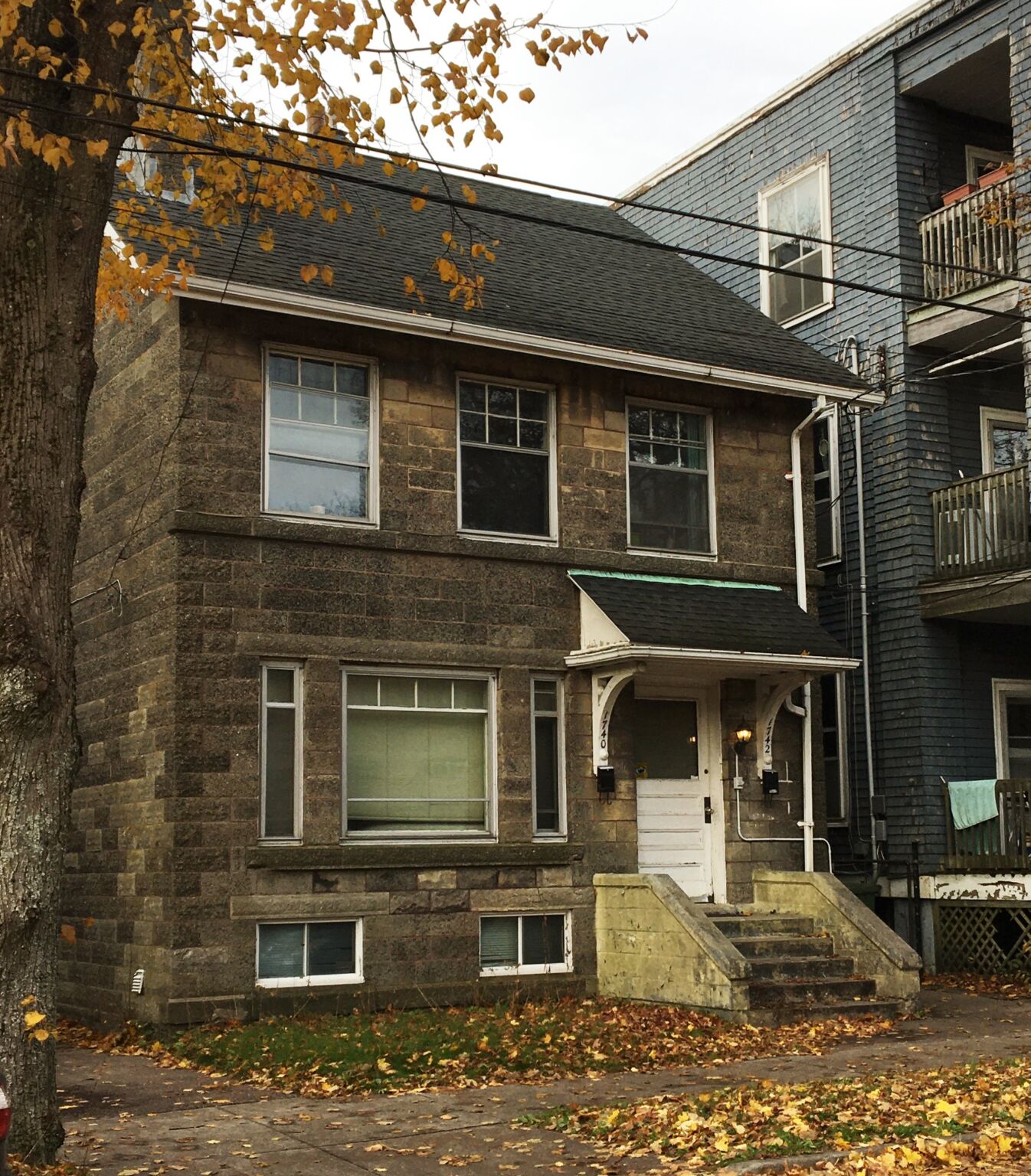 So what about the Hydrostone?

Halifax may be the only community in the world that named one of its favourite residential areas after a brand name concrete block. The Hydrostone is the planned community constructed after the 1917 Halifax Explosion. The picturesque rowhouses were constructed of explosion-resistant concrete block.

I’ve been ignoring hydrostone because it it not rock-faced and there is lots written about it. One thing I did learn recently is that the finished face of a hydrostone block is a layer of fine crushed granite to give a sparkle to the surface. You can discern this on houses that have been carefully cleaned. 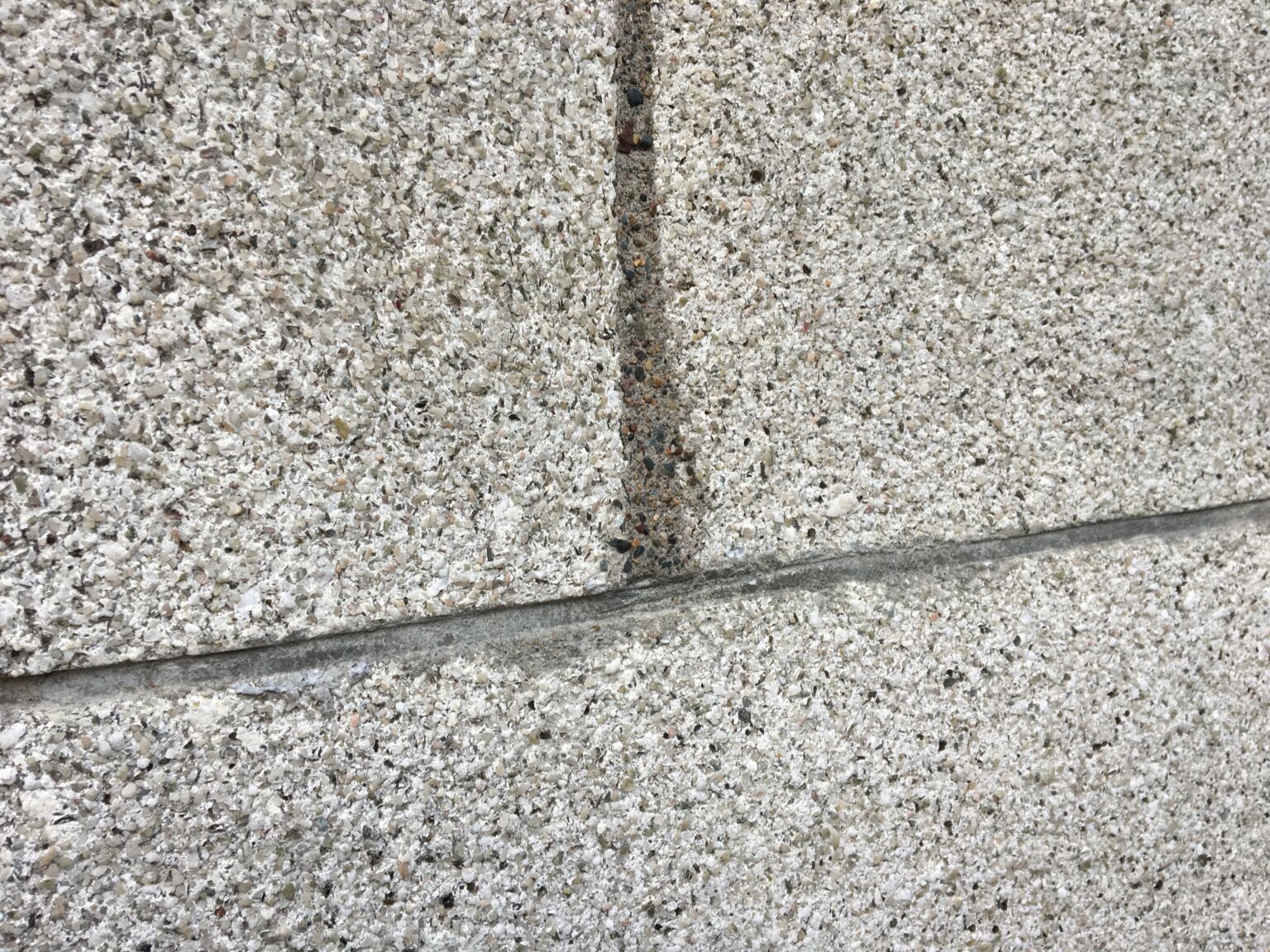 I’ve long had an interest in our inclination to make one material look like another (here is a post on fake wood grain). These rock-faced concrete blocks have a special charm because concrete was a “new” material and people were still figuring out how it could be used. Also, in 1900 there was generally a better sense of what real, cut stone construction looked like, and folks tried to accurately replicate that in concrete.

Today there are many concrete products that try to simulate stone. Let them age for 100 years, and just maybe they will be worth noticing. 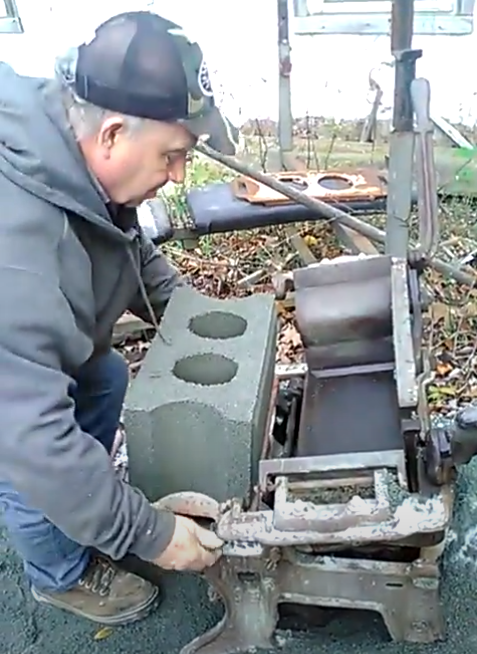 My friend John lived nearby the post office so I asked him for his 1950s memories of the shop. His reply reminds me of a passage from  A Child’s Christmas in Wales by Dylan Thomas.

The shop was usually run by the post mistress – Hummel knockoffs, sparklers, roman candles, firecrackers, Xmas paper and cards, ornaments, glass figurines, I think they sold those Xmas lights (the single unit 7 candled ones from the 50s). Odds and sods that were marked down – likely a salesman peddling that cheap stuff. Stuff hanging from the ceiling but don’t remember what. Wooden toy kits – name escapes me but were in a wooden box with sliding wood cover (roman columns & arches, windows with red cellophane glass). Where we bought our short-lived balsa wooden airplanes in flat packs. Japanese lanterns & fans. Dinky toys. Wasted too much time drooling over crap.

Always had an odd hum in there – electric, or radioactive à la Havana embassies?