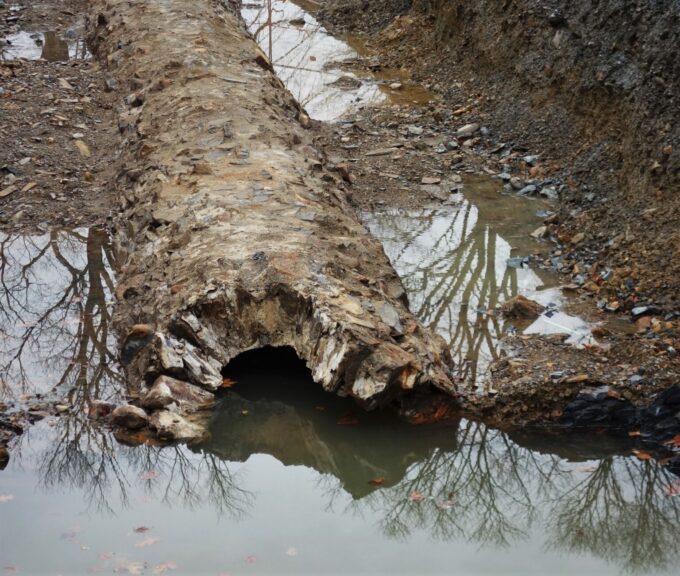 There is buried treasure for you to behold, but be quick, you will never get another chance. The bonanza is a section of the stone conduit that carried Freshwater Brook from the Halifax Common towards the pond in the Public Gardens. The brook was sent underground probably in the late 1870s. 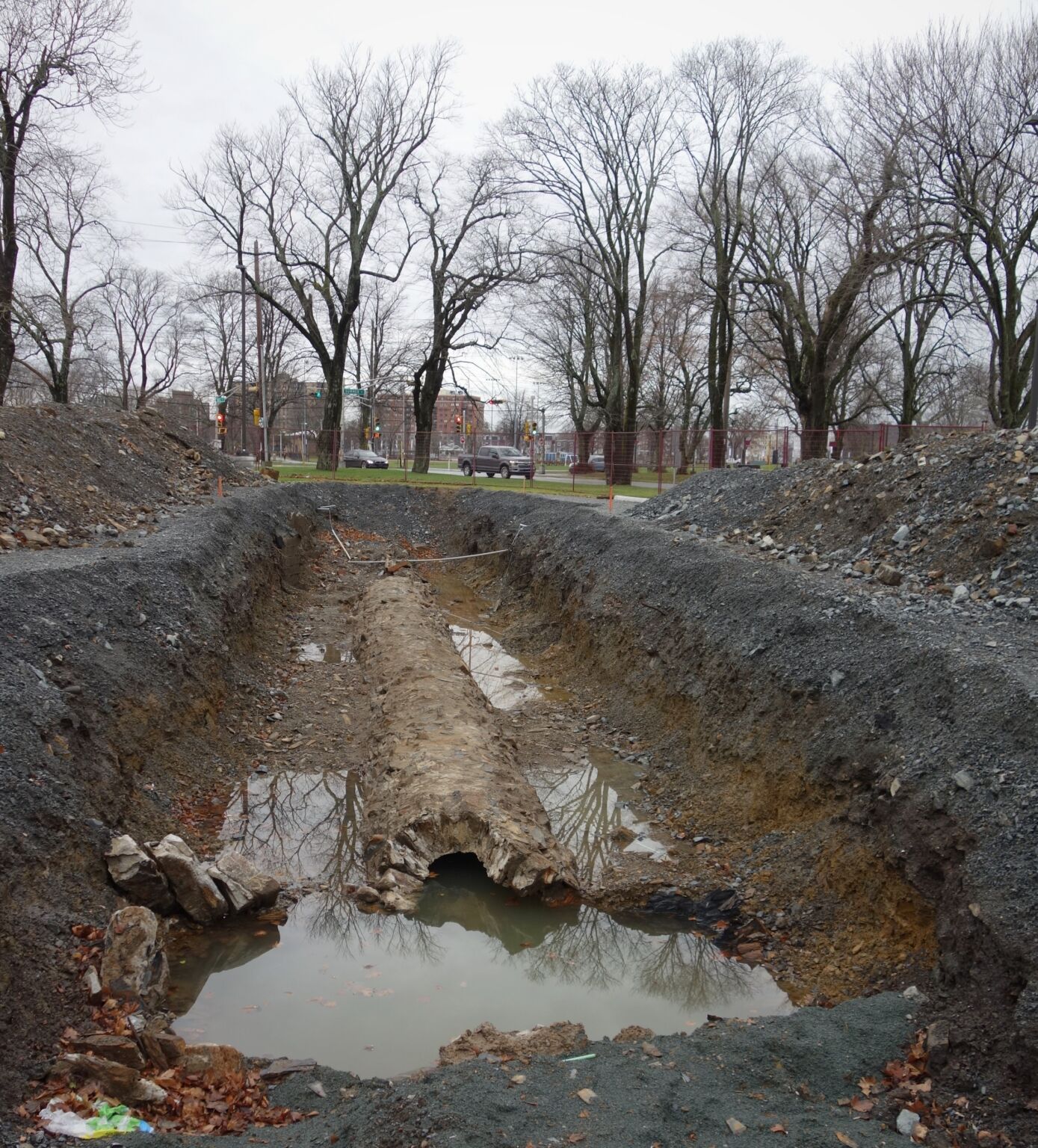 If you have kids of a certain age, this relic might be something for them to see. Forty years from now they will still remember the experience and be able to tell folks on the patio about that moment they saw Freshwater Brook daylighted.

This marvel of 19th-century engineering has been revealed by our folks at the Province, who are prepping the Common land just north of the Museum of Natural History for one of their multi-story car parks, that will serve the hospital complex.

In the photo below you can see that the Museum of Natural History was built, in 1970, right in the path of the brook. When I worked in the museum the freight elevator would regularly descend to a pit filled with brook water. Splish splash. 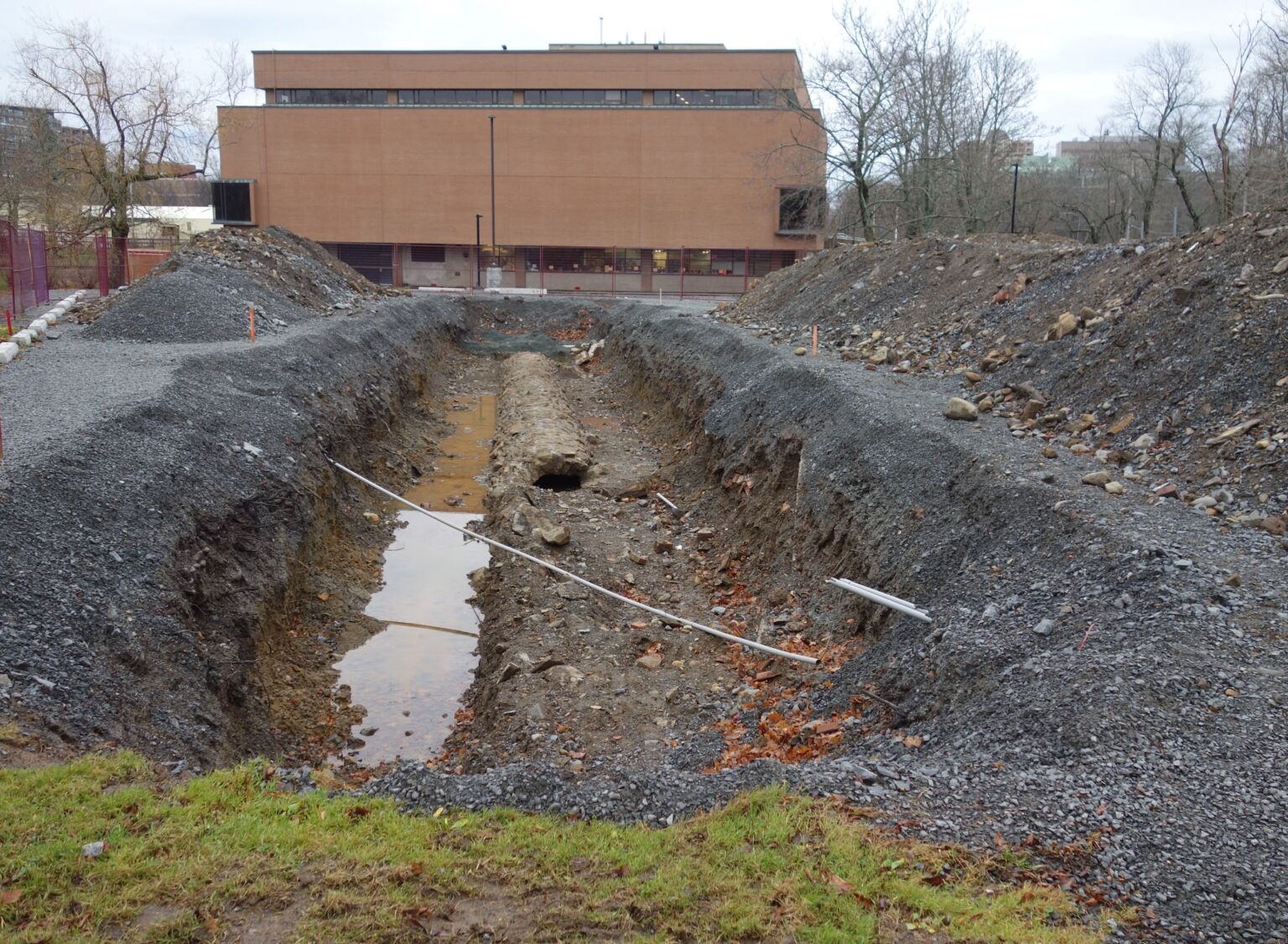 Remember what this space looked like in December last year? After public outcry about the parkade project, Labi Kousoulis, the Liberal MLA for this part of town, provocatively announced he had never seen anyone having a picnic here, thus it was OK to build a temporary parking lot, followed by a heating plant on this parkland. 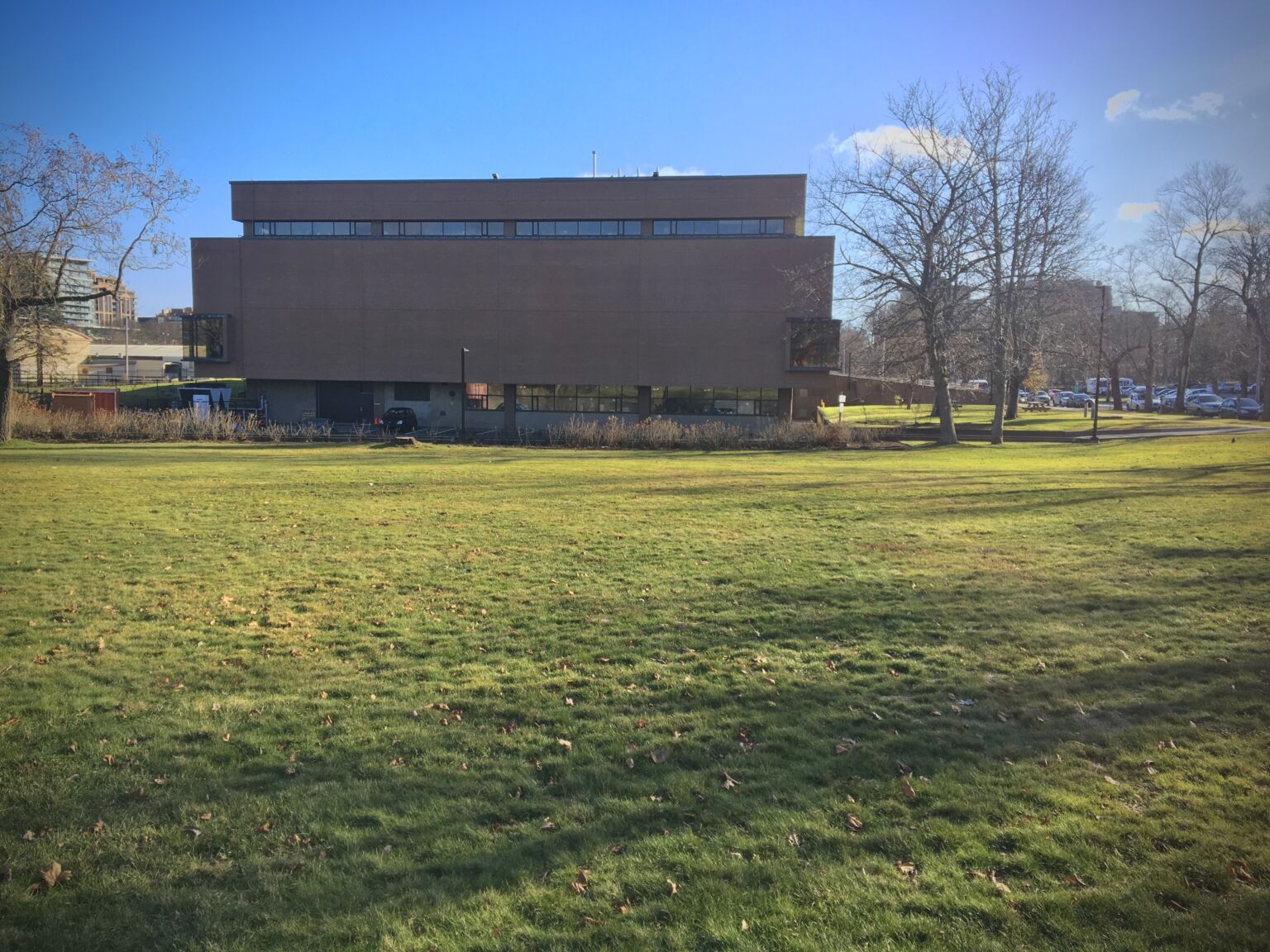 So of course a bunch of folks immediately held a spirited community picnic there. Ben from the Bengal Lancers dropped by to show support. 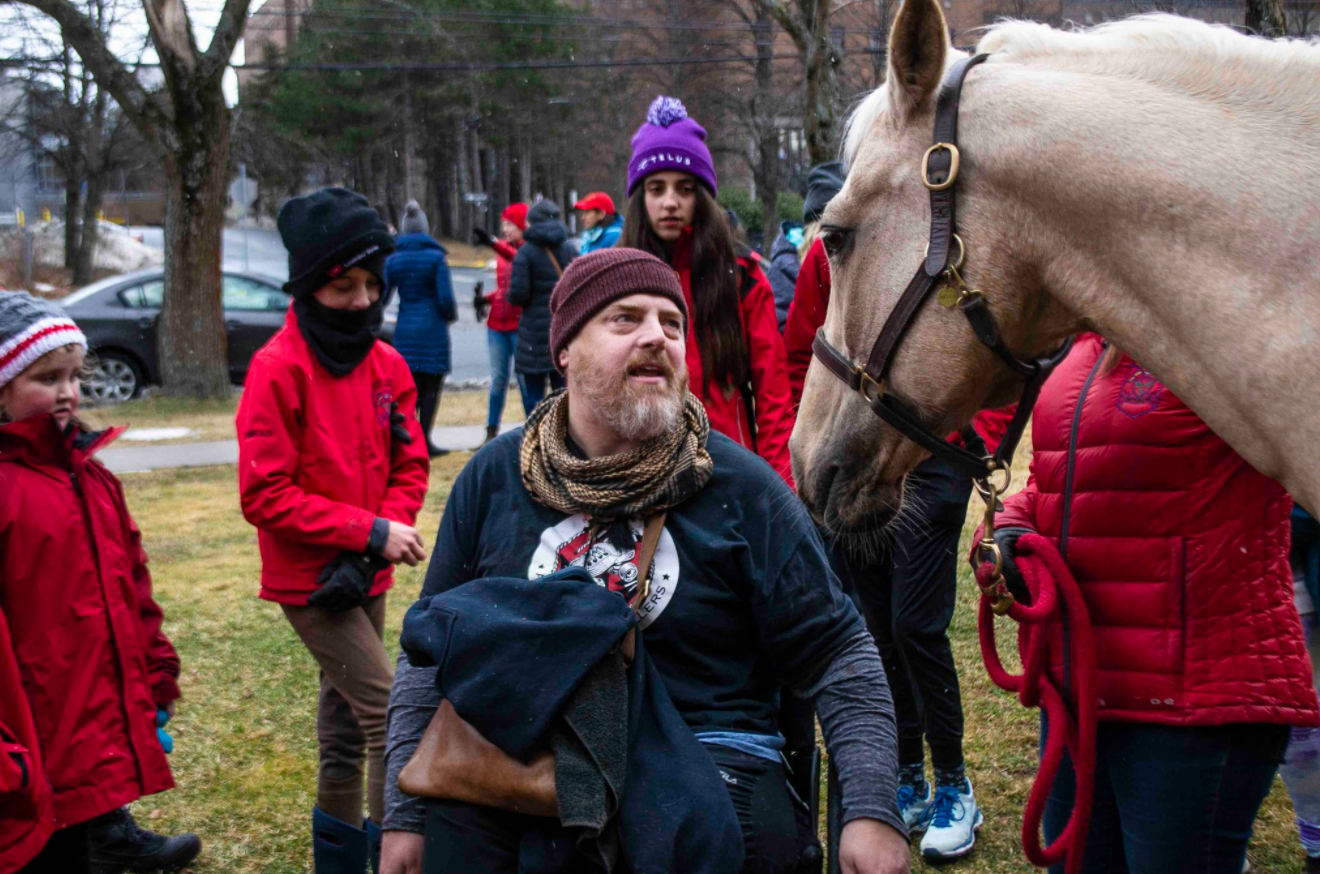 The “temporary” parking lot was built but no cars ever actually parked there. The bully Province blinked and changed the location of the parkade to the north side of the museum where Freshwater Brook has now been uncovered. 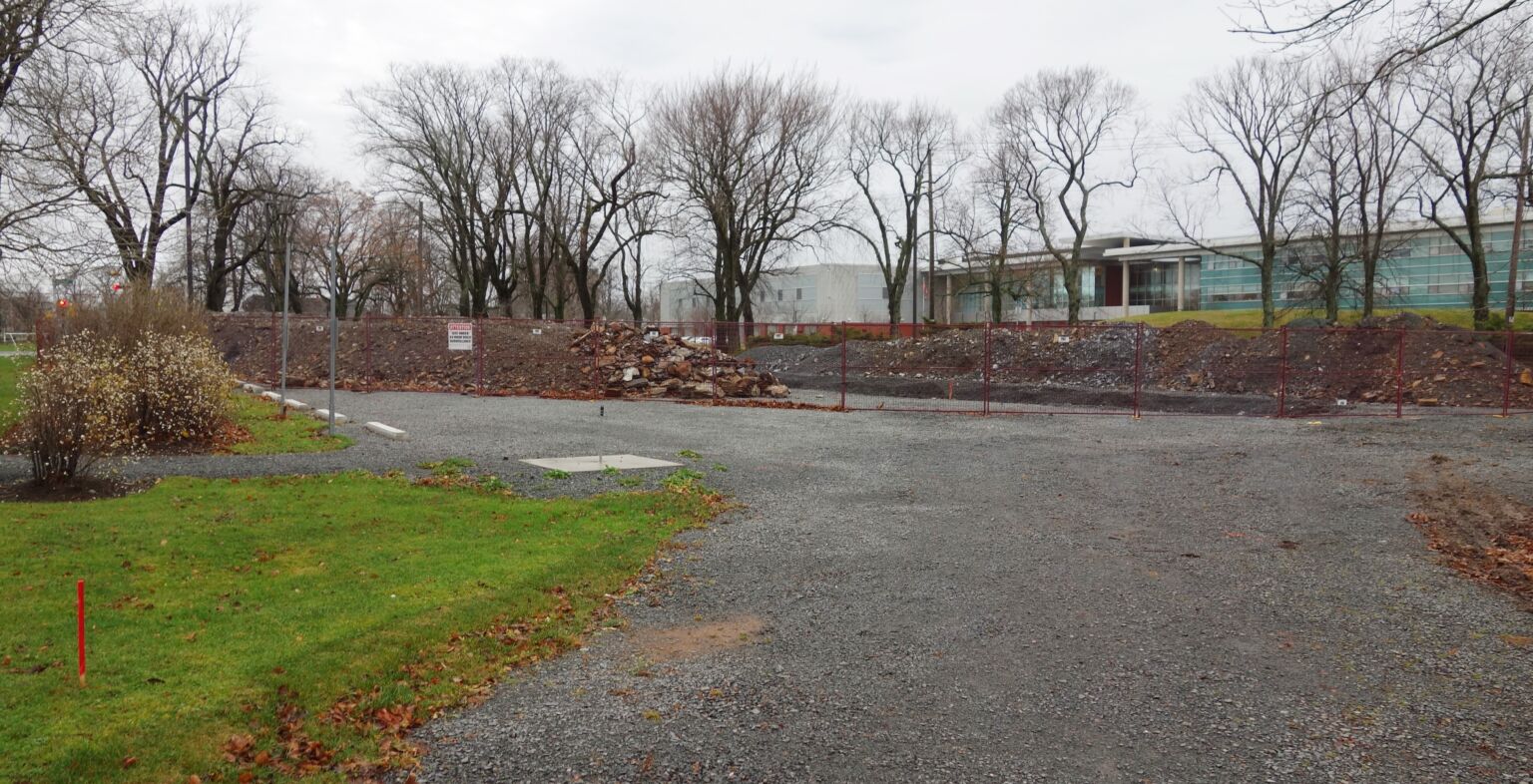 Roll on, big Brook, roll on.

In the last few years there has been renewed interest in Freshwater Brook, so it is easy to discover more of its history. The Friends of the Halifax Common are champions of the waterway (Peggy Cameron from that group alerted me that the conduit had been exposed). Check their site for stories.

Dr. Jonathan Fowler is a wonderful ambassador for the archaeology community in the province and is generous in sharing information on current research. He has posted some insightful maps that show the locations of old waterways and wetlands in Halifax, superimposed on contemporary maps.

Using Fowler’s maps you can walk the route of Freshwater Brook, it is of course all downhill. The source is close to the Java Blend coffee shop so you could start your journey by carrying fluids.

I’ll point out a couple of bits of Brook lore that I enjoy. When the buried stream leaves the Public Gardens it goes under Victoria Park, which exists because of the waterway. Then it turns south east rushing down towards the harbour. The Sobeys at the bottom of Queen Street was built with a cut off corner to make way for the line of the brook! 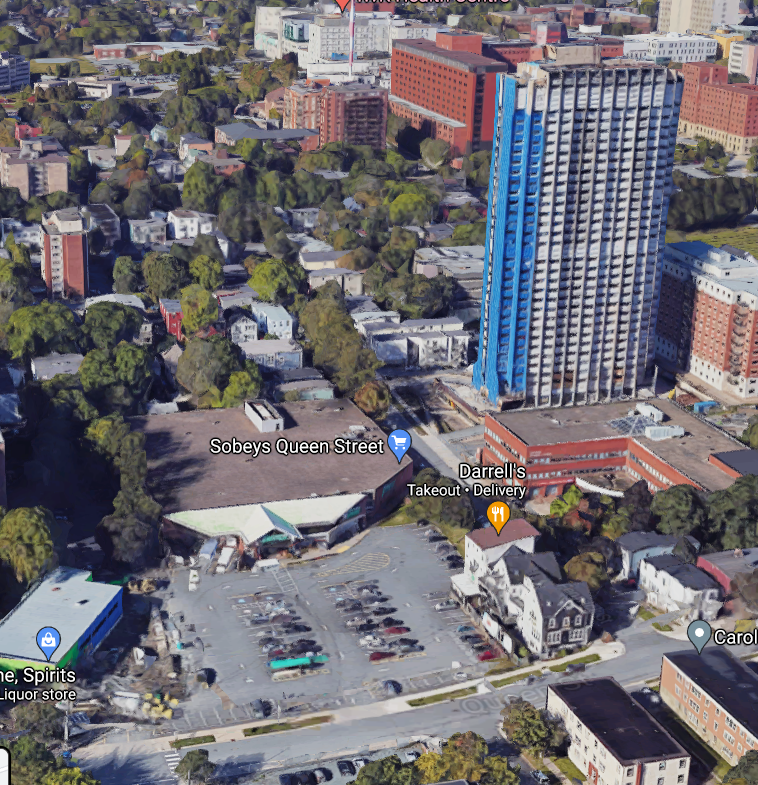 There was a waterfall at the head of Smith Street as the brook made its last dash, under the Kissing Bridge and into the harbour. The stream is now blocked by The Peninsula apartment building that regularly and not surprisingly floods. “If only we had known we were building over the mouth of a river…”, muses Jonathan Fowler (with tongue in cheek). 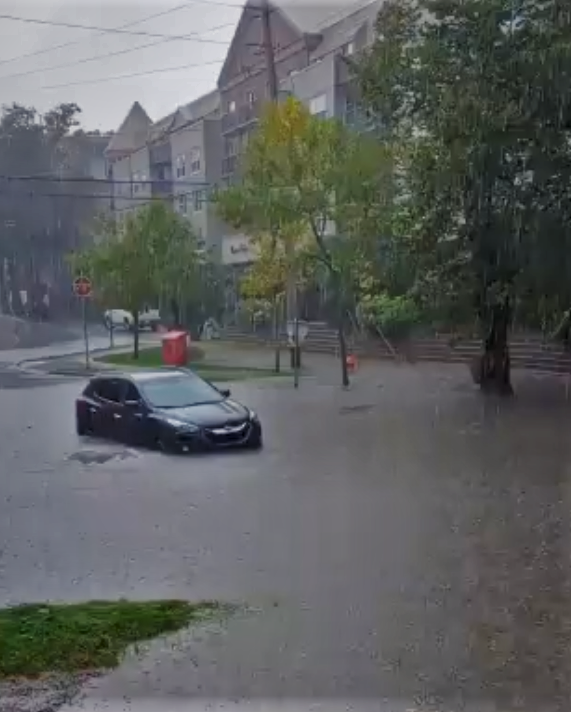 If you visit the conduit site, look for a bit of foundation sticking out of the west side of the excavation. I suspect this is a remnant of the Fire Alarm Building that was demolished in the mid-1970s. Back in the day, if you pulled a fire alarm, the message was received in this little brick building and an operator would alert the appropriate fire station. 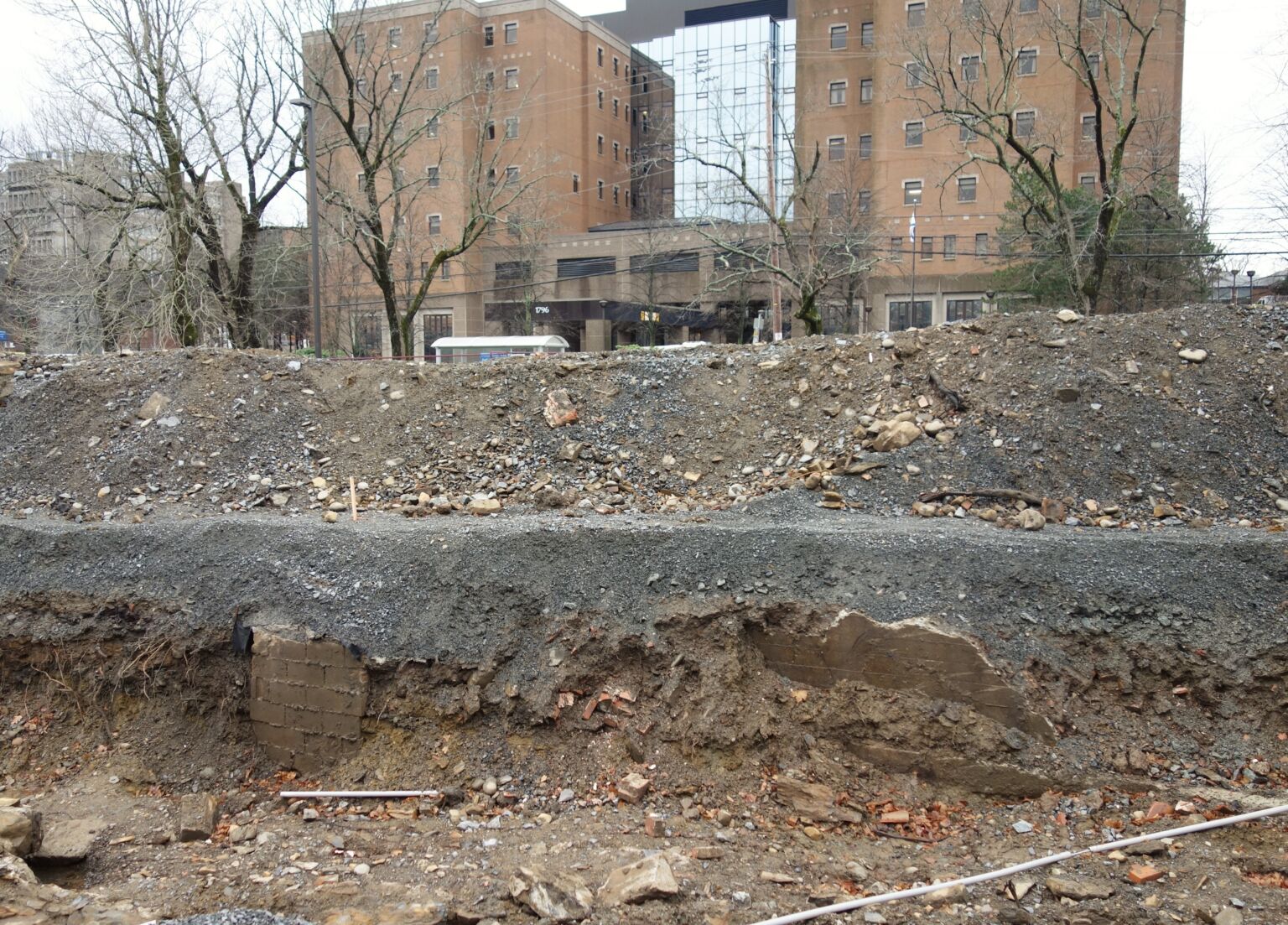 I couldn’t locate a photo of the building, but the Municipal Archives has this swell promotional photo of a woman demonstrating how to pull an alarm on one of the red street boxes. The model appears to be a waitress, perhaps recruited from a nearby snack bar. This alarm box is at the corner of Spring Garden and South Park, and those are the gates to the Public Gardens across the street. And because everything is connected, our alarm puller is standing more or less on top of the buried Freshwater Brook! 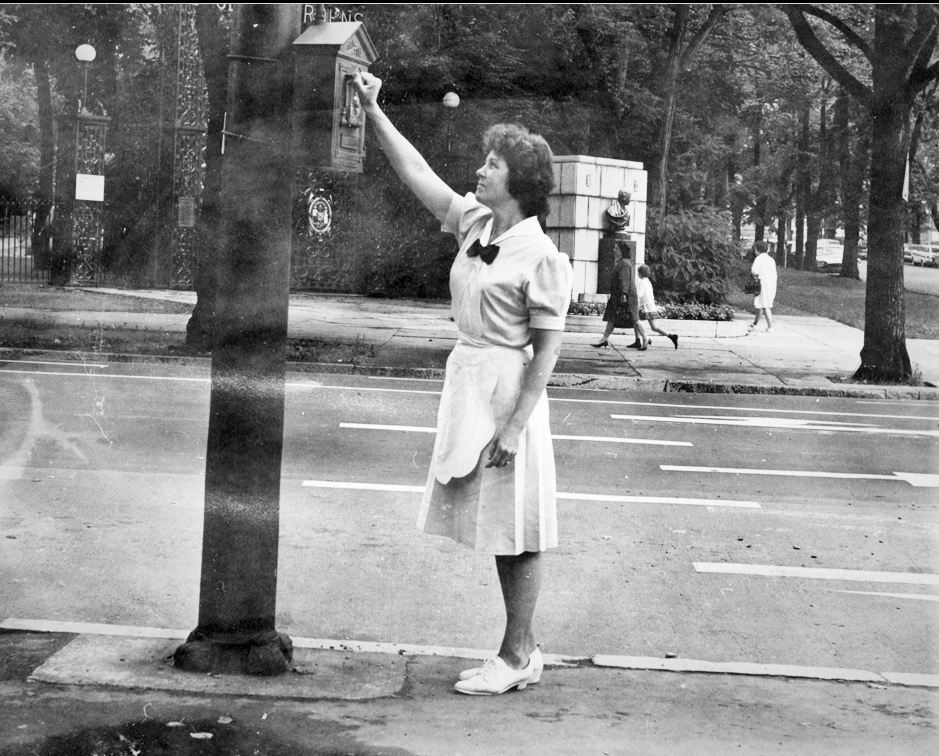