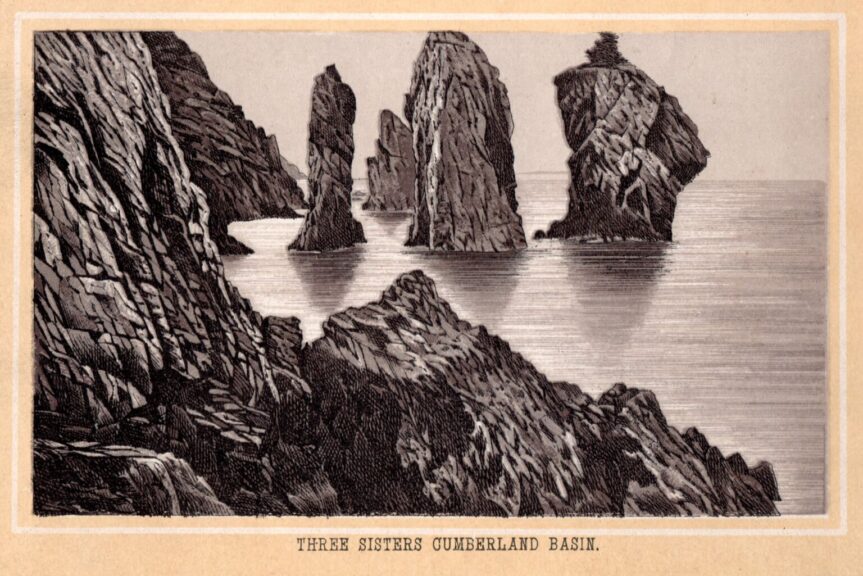 The recent designation of the “Parrsboro Shore” as a UNESCO Geo Park is a big, wonderful deal. I’m a fan of that shore, but it might take me a little time to totally embrace the “Cliffs of Fundy” branding. Maybe I just need to say it quickly, as a single word: Cliphs-o-fun-day. That’s better.

The use of the Three Sisters sea stacks as an icon for the park makes me particularly happy. It also provides an opportunity to tell some little stories of discovery. 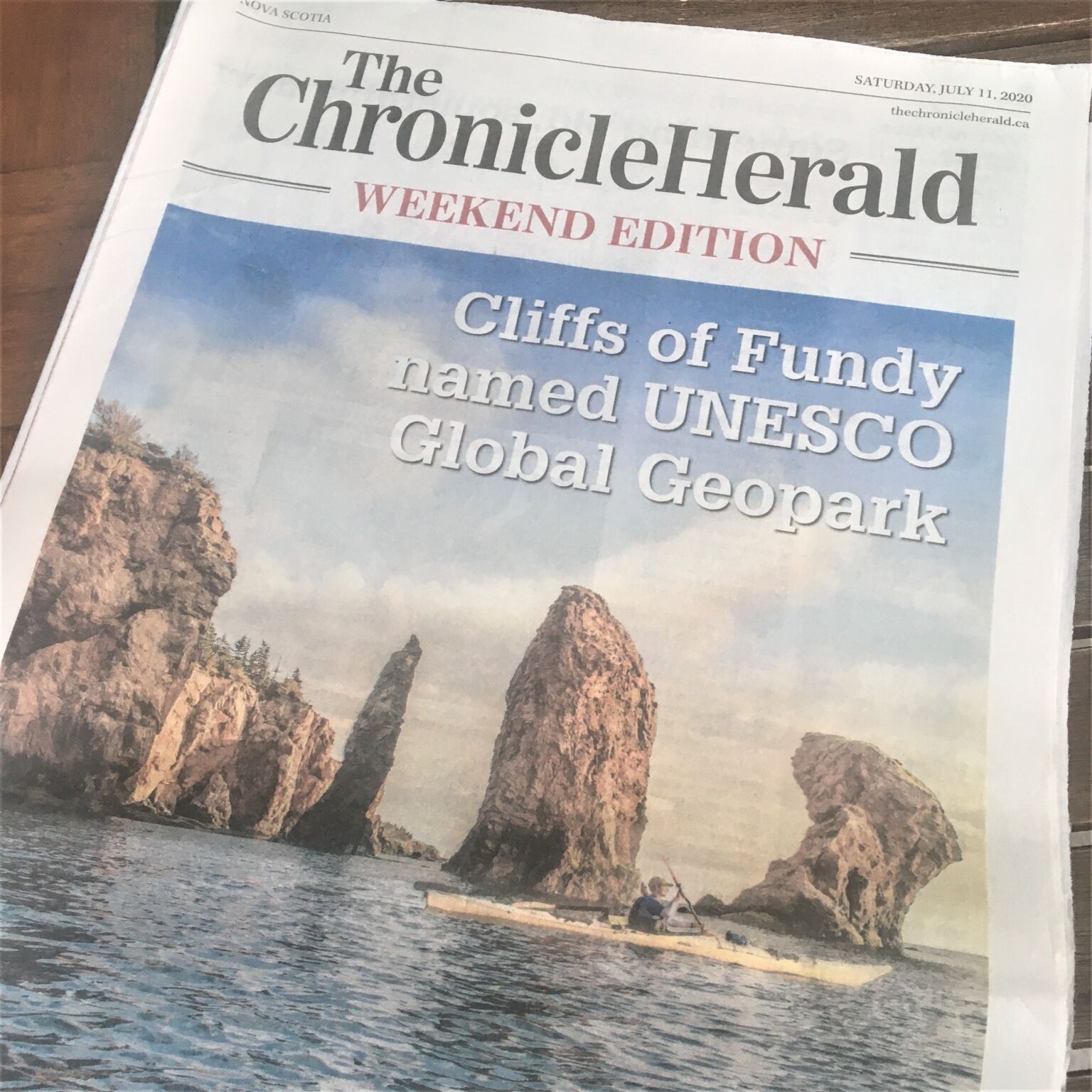 For most Nova Scotians, it is probable that the location and the story of the Three Sisters were unknown until relatively recently. I first learned of them in a little 1880s album of lithographs of Halifax. On the same page with images of our grandest public buildings was this unknown, to me, rock formation. It was the only picture of a location outside Halifax, in a publication intended as a souvenir for visitors. Those Sisters must have had some notoriety at that time. 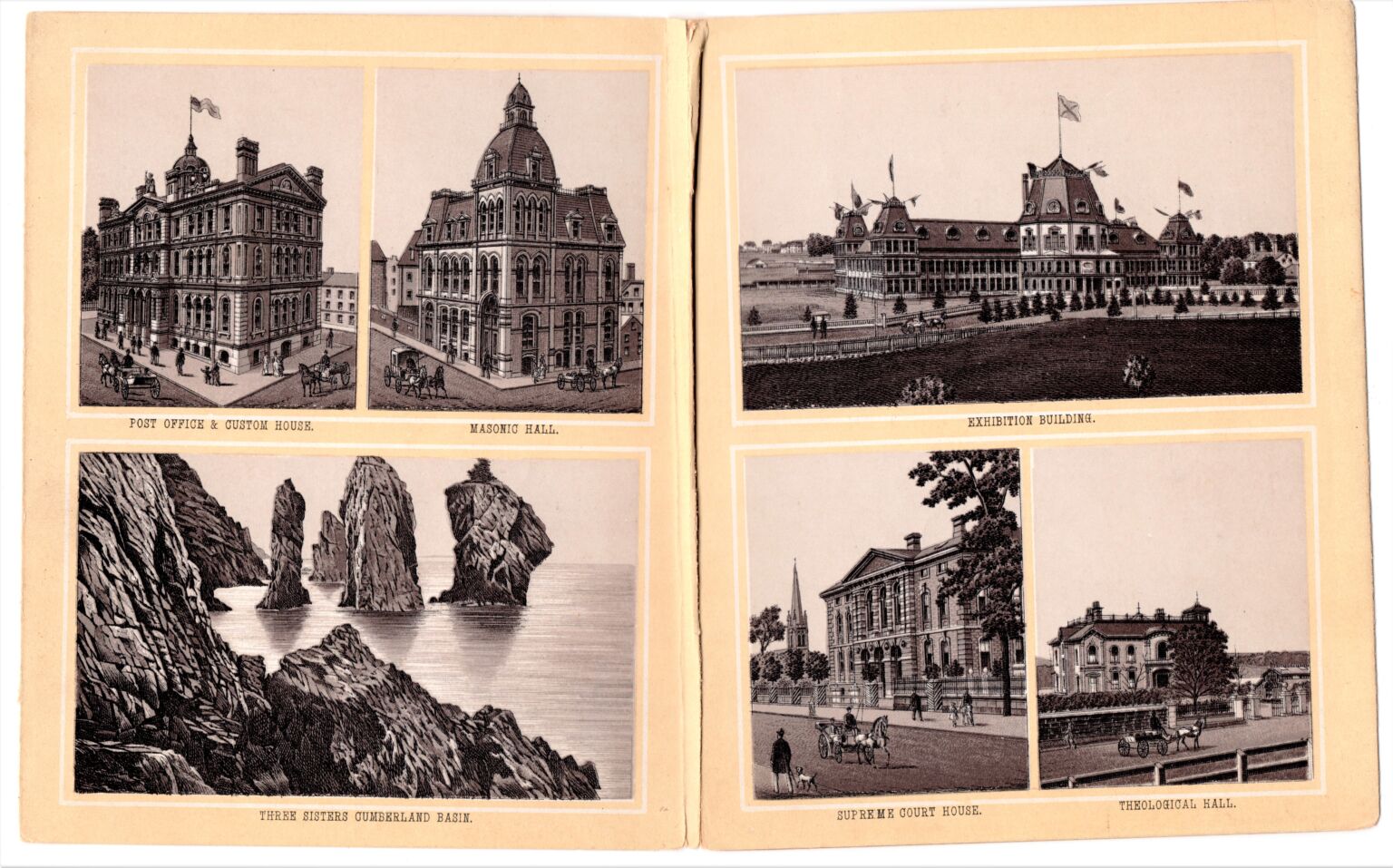 That picture provided a clue to help explain a story in my grandmother’s memoir of her childhood, travelling with her sea captain father in the 1870s. [Mary Davis also appears in a recent post about her experiences during an outbreak of smallpox aboard ship. ] 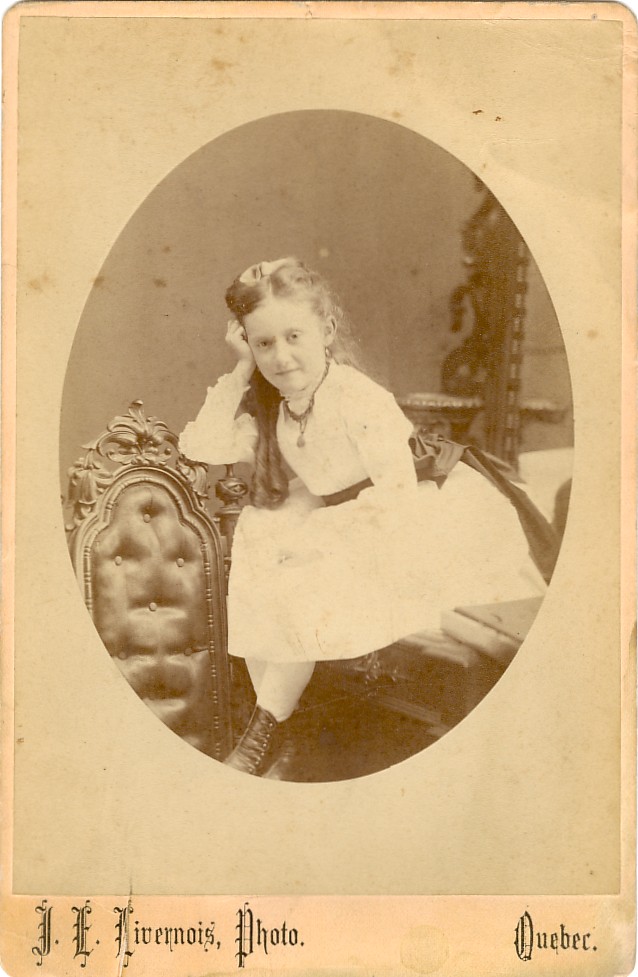 This episode happens about 1877, when Mary would have been ten years old. She and her mother had spent some time ashore with her grandparents on Brier Island. Her mother was ill, and Mary went to stay with some aunts. Then after a little while, surprise, she learns there is a new little brother, Ralph.

Within a few months her father, Captain Sam Davis, comes by in his vessel, and they all begin another adventure.

After a while, back came the Herbert C. Hall and we had to pack. Of course I took Nell [her little dog], also my slate and school books. I had been a few weeks to school that spring. Our ship went up the Bay of Fundy to Three Sisters near Parrsboro, for lumber. It was just a small place. A big ship called the D.R. Eaton was being built there, and there was a lumber mill.

After the creation of Cape Chignecto Provincial Park in the 1990s there was more information available about the history of the park lands and I was able to get an understanding about where Mary had been. The Three Sisters village was in a little cove and valley just around the point from the sea stacks. The community existed because of the timber trade, and wood cut on the surrounding uplands was sawn at a big mill. My great grandfather’s vessel was taking a load of this lumber to Liverpool, England.

About the time of their visit, this timber operation was acquired by an Eaton family (hence the name of the vessel being built) and the community became known as Eatonville.

Here is a photo of Eatonville wharf in 1906, about thirty years after Mary’s visit. A schooner at the wharf fell over when the water was out at low tide, and she lost her deck load. Woops. A big steam-powered sawmill is in the background. 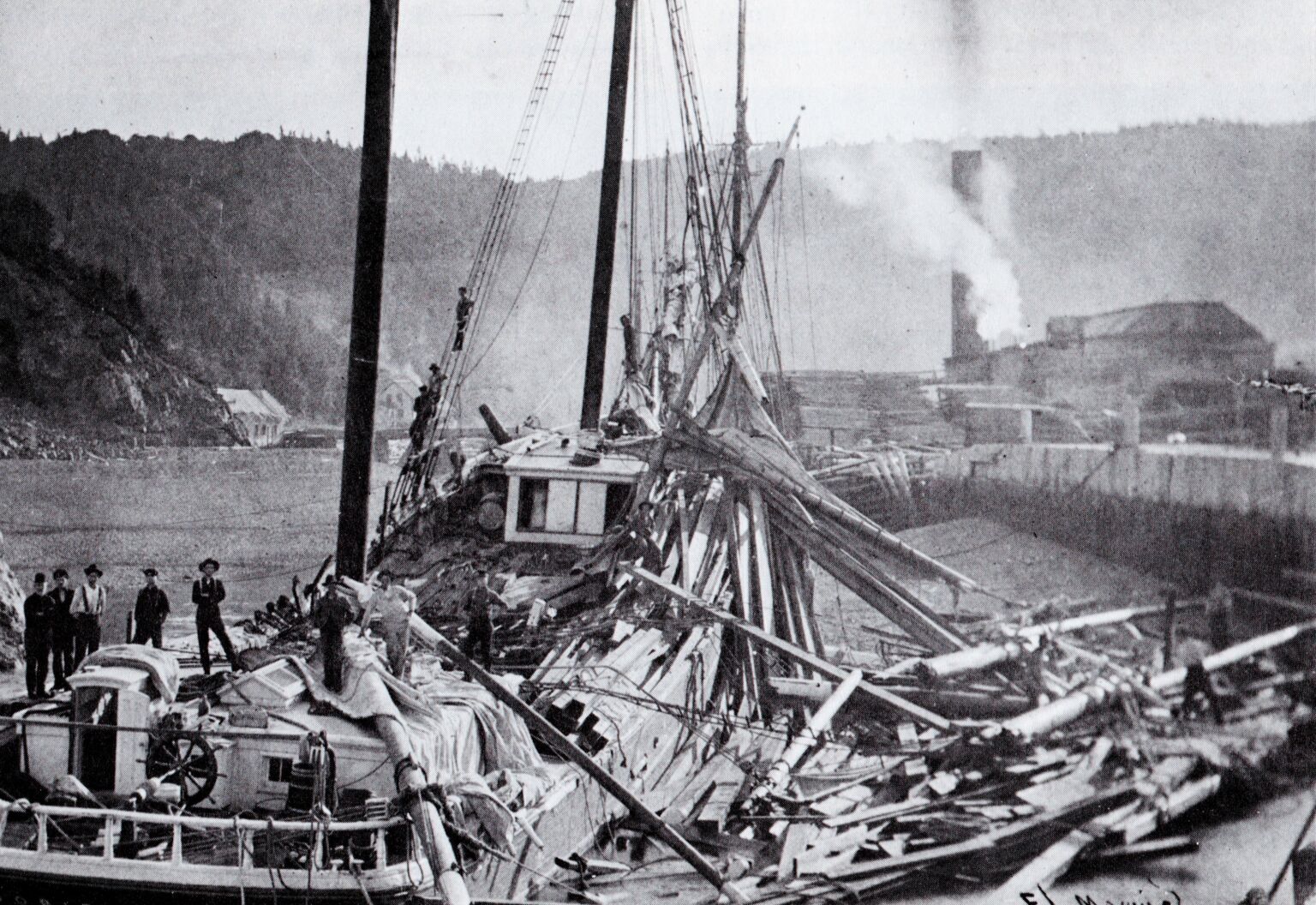 It is now a pleasant and easy hike to see the Three Sisters. We did it a couple of years ago, and it still feels out of the way. I was pleased to realize you can see the Sisters without getting into a kayak (that was not going to happen). 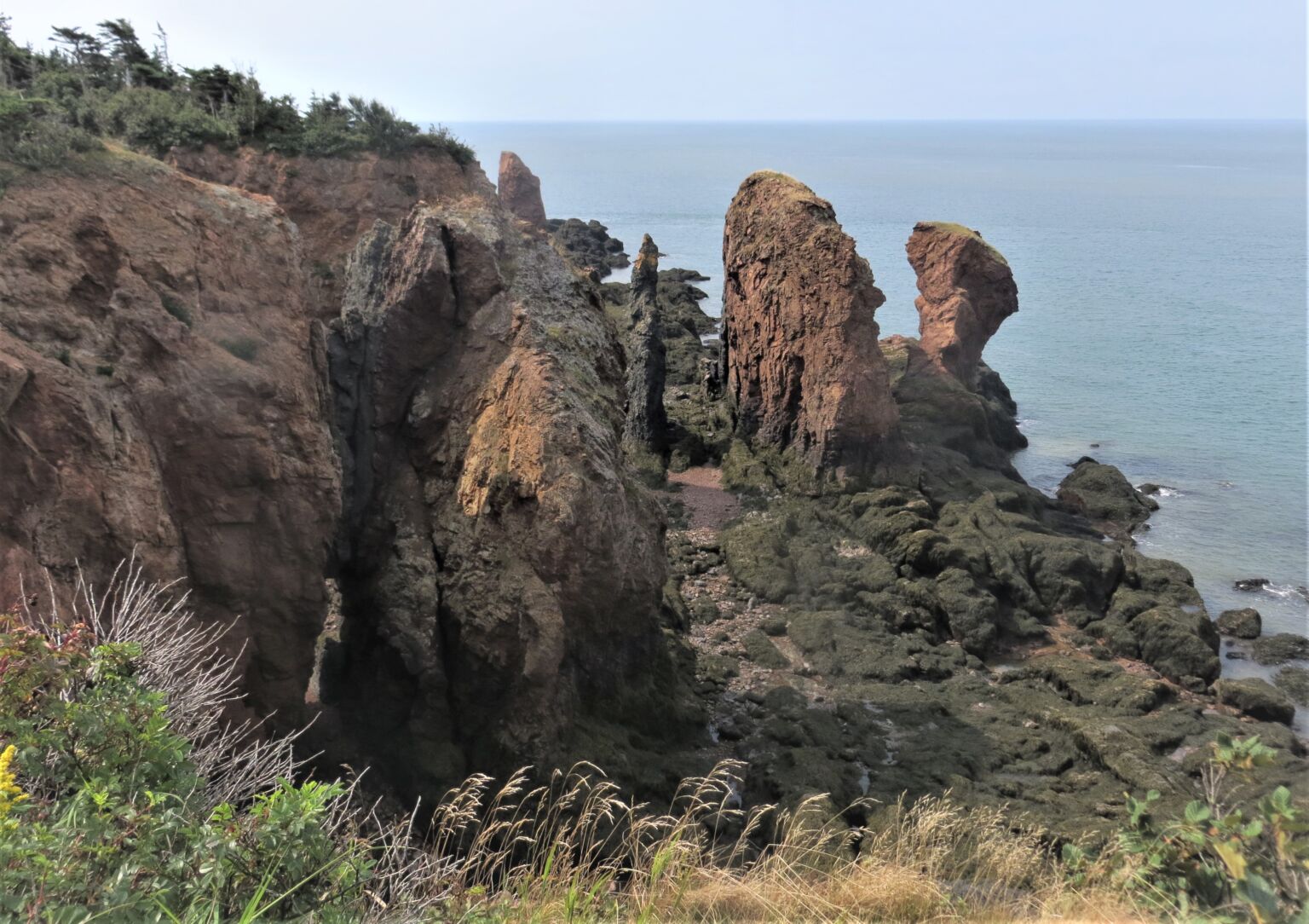 The site of the Eatonville wharves and steam sawmill is sublime; from a distance there are no hints of its industrial past. The community itself was located some way up a river valley to the left. The stone of the Three Sisters has eroded some over the years, but Eatonville disappeared completely; the last resident left in about 1940. No more wood and no more markets. 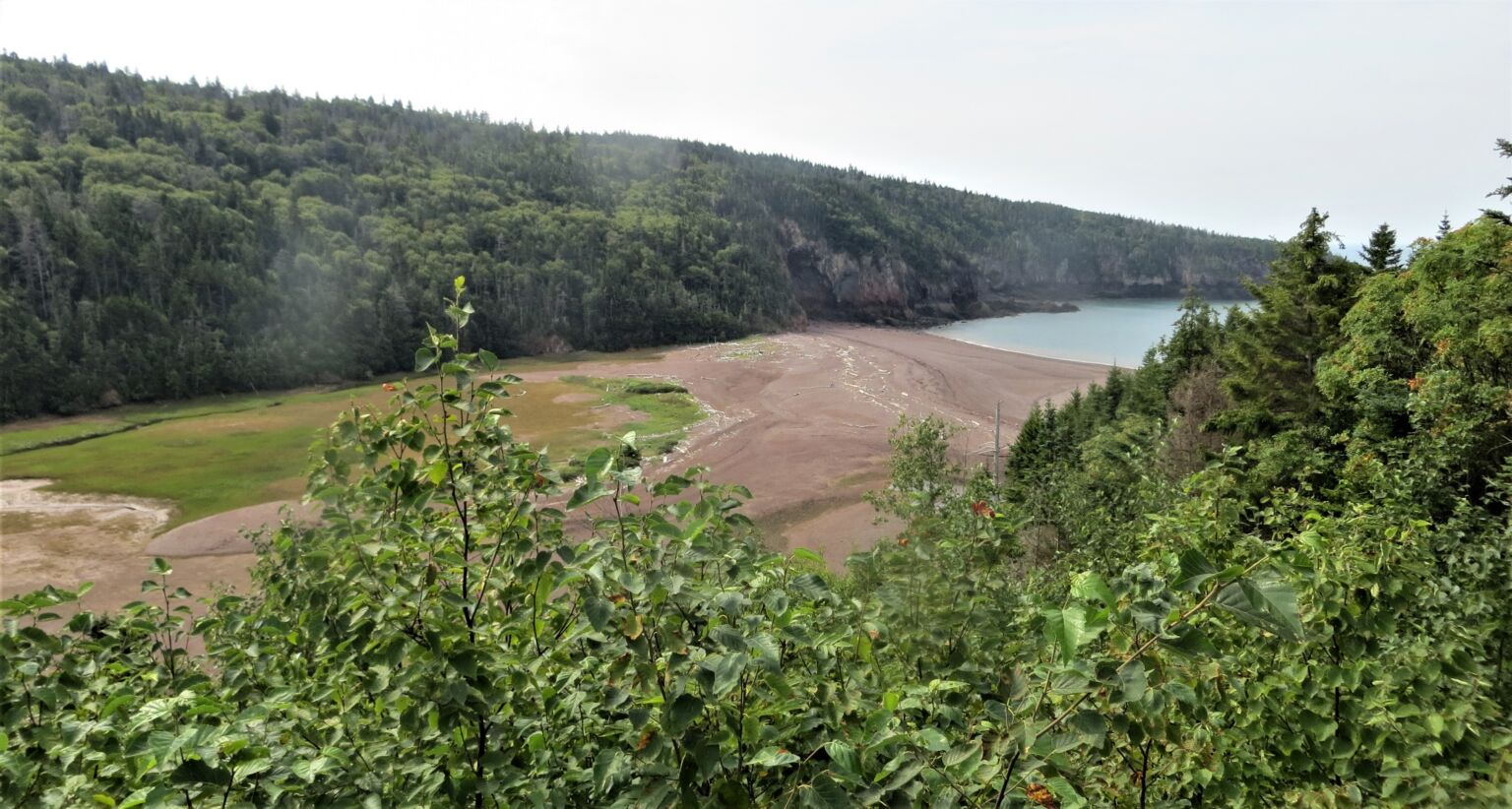 While my great grandfather’s vessel was being loaded Mary’s cousin Fred Ladd joined the vessel. She writes:

And so one day the coach with the mail landed Fred. My, I was pleased to see him! He soon got off his good clothes and dressed to go rowing with me. What great times we had together.”

Probably they rowed around the point to get a closer look at the Sisters.

On the Eatonville Trail are many good views of cliphs-o-fun-day. 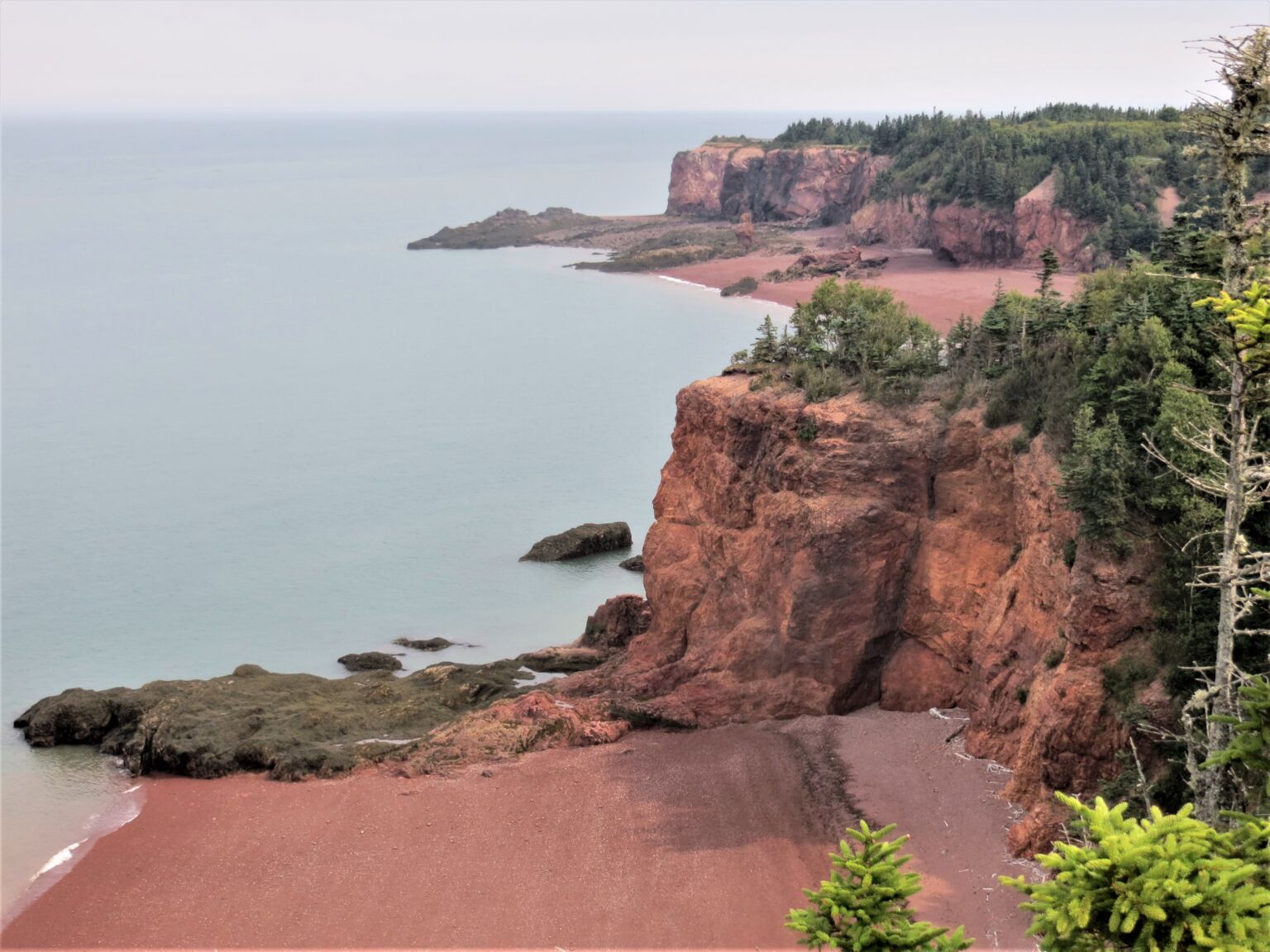