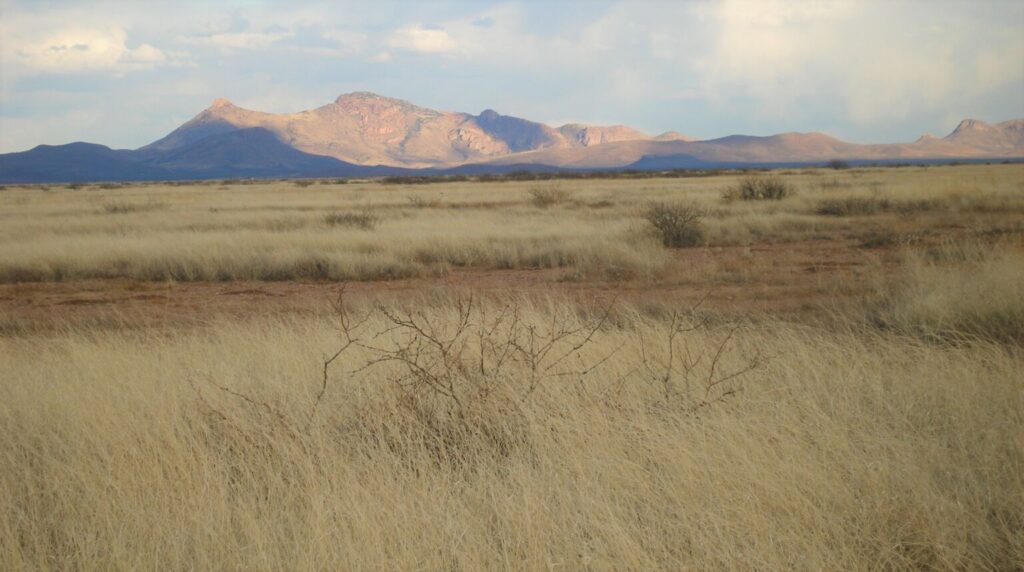 Every Wednesday, since the outside world shrank, we have a Zoom happy hour with a group of friends. In one of the gatherings we were all mourning cancelled trips, and wondering if we could ever feel comfortable travelling again. Then we started talking about little things brought back from trips in the past. Carol disappeared from the Zoom screen and reappeared with a piece of rubble picked up in the streets of Rome, Cathy quickly produced a fossil she had discovered in Ontario, and Kathleen walked her camera over to some stones that had come from an island far away. A Zoom show and tell, that demonstrated that these items were close at hand, and valued.

People seem to have evolved to gather and collect little things from their surroundings. Got me thinking about the fragments Sheila and I have picked up off the ground on trips, and which ones hold enduring interest.

Twenty years ago we visited the Jardin Majorelle, in Marrakesh, Morocco. The garden was established in the 1920s by a French artist, Jacques Majorelle, and is celebrated for the striking use of colour, notably a vibrant, cobalt blue. In the 1980s the garden was purchased and restored by Yves Saint-Laurent and Pierre Bergé. 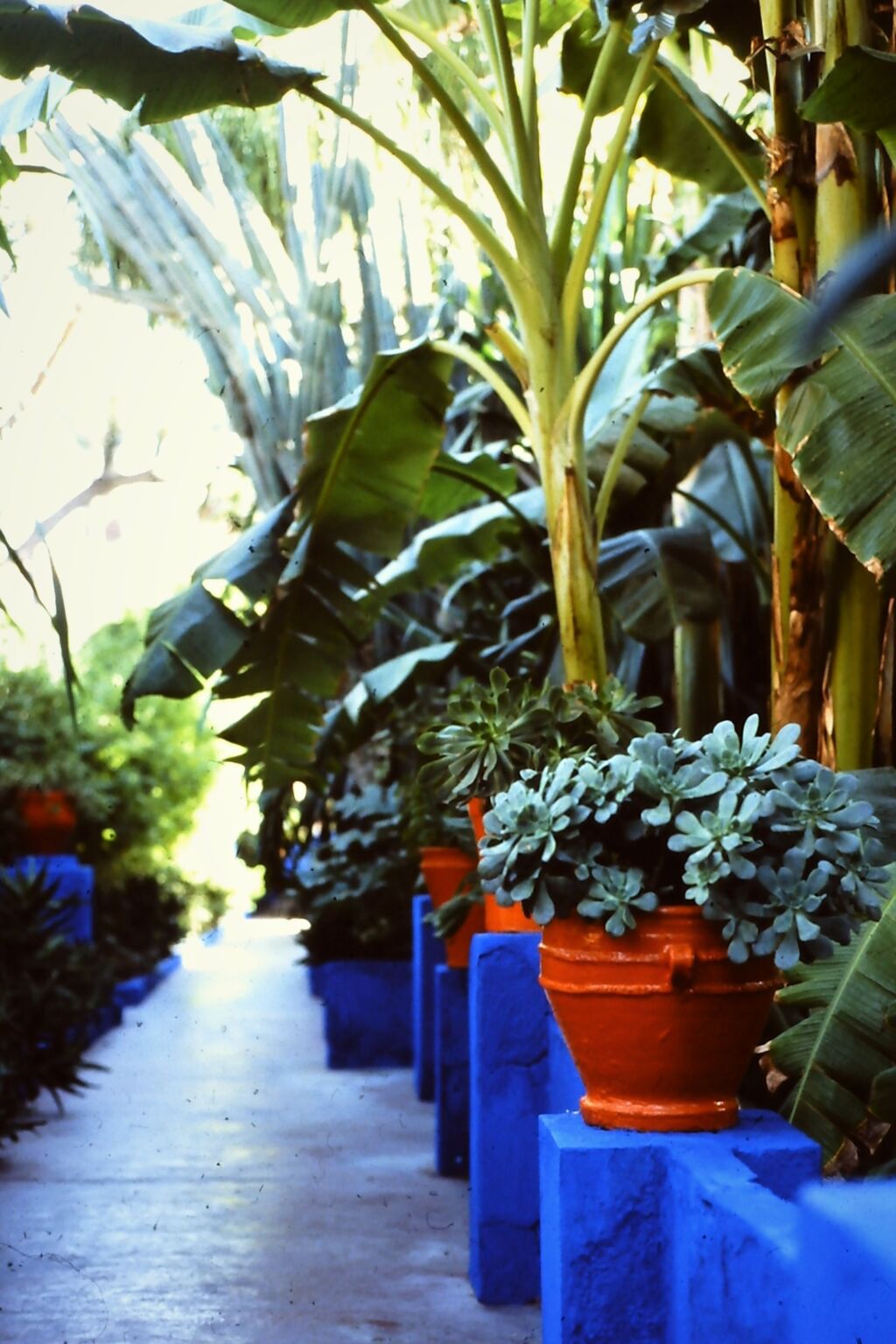 On our visit we came upon some concrete work being demolished and out of a rubble pile I picked out a small fragment with a sample of the famous blue paint. We often have this piece on display. 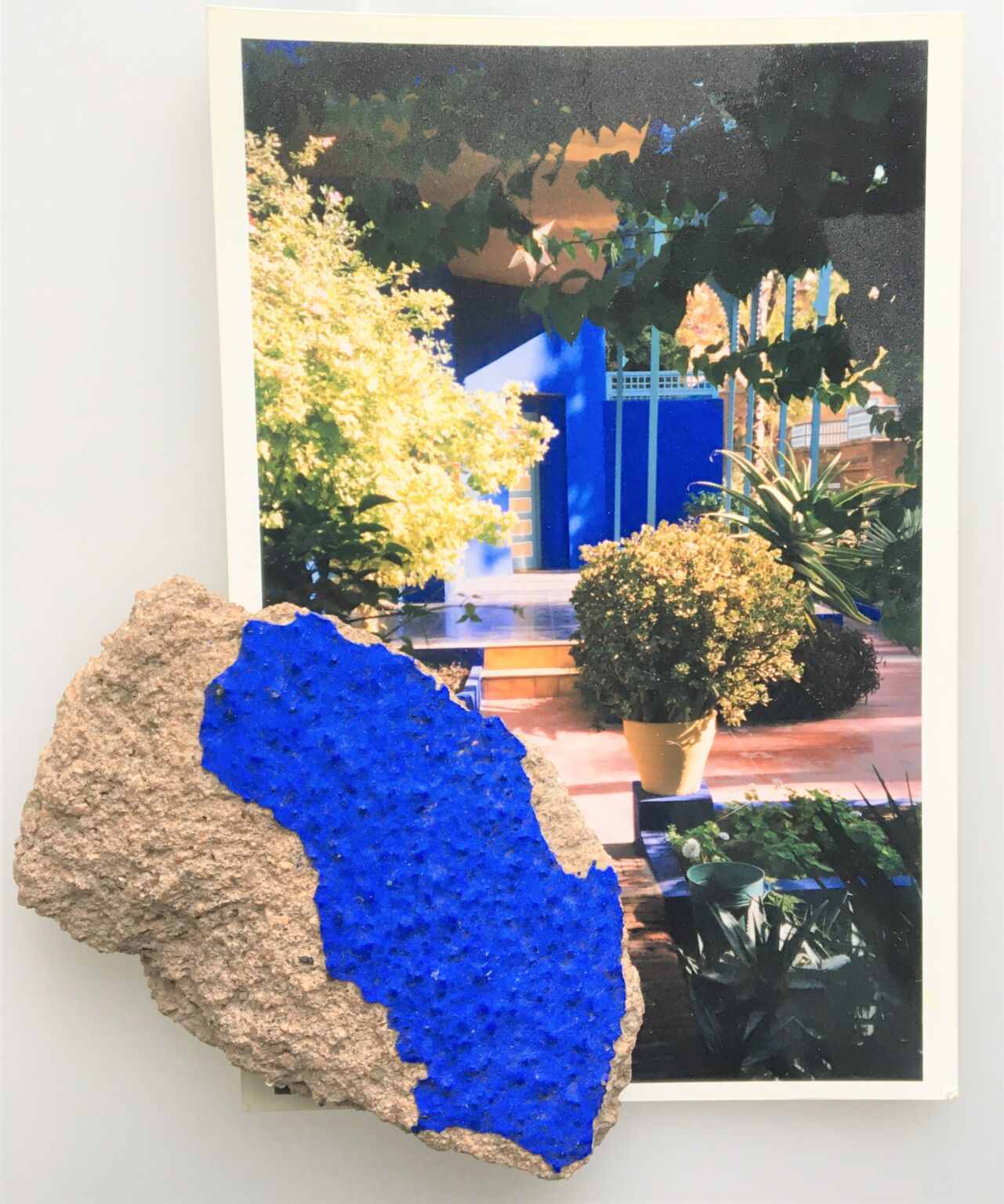 This is what we collected on a trip driving down the Mediterranean coast of Turkey. 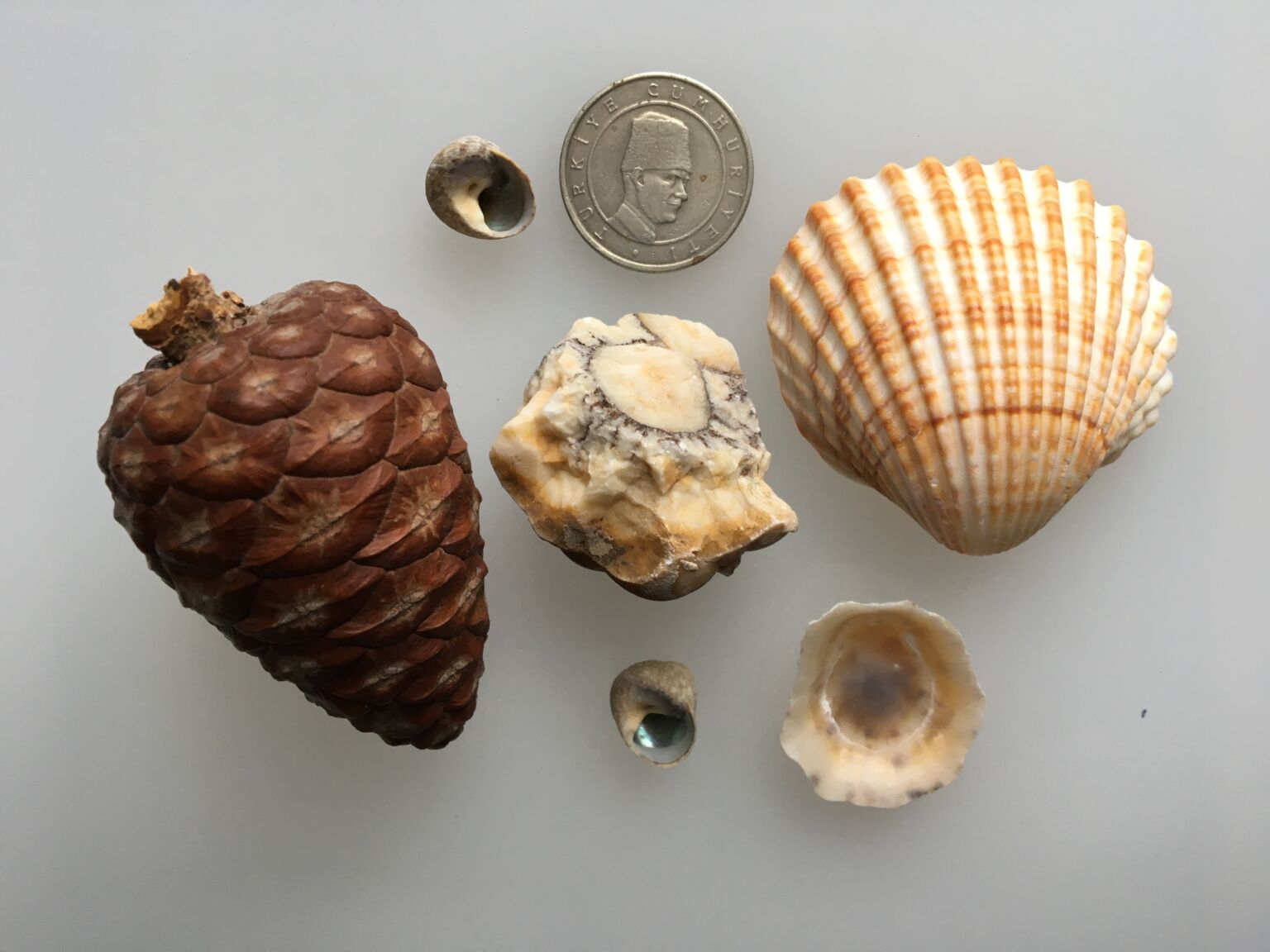 The pine cone is attractive, but I don’t remember where anything came from. I can barely conjure up being on a beach. I could do without these things. The Turkish landscape was beautiful though. 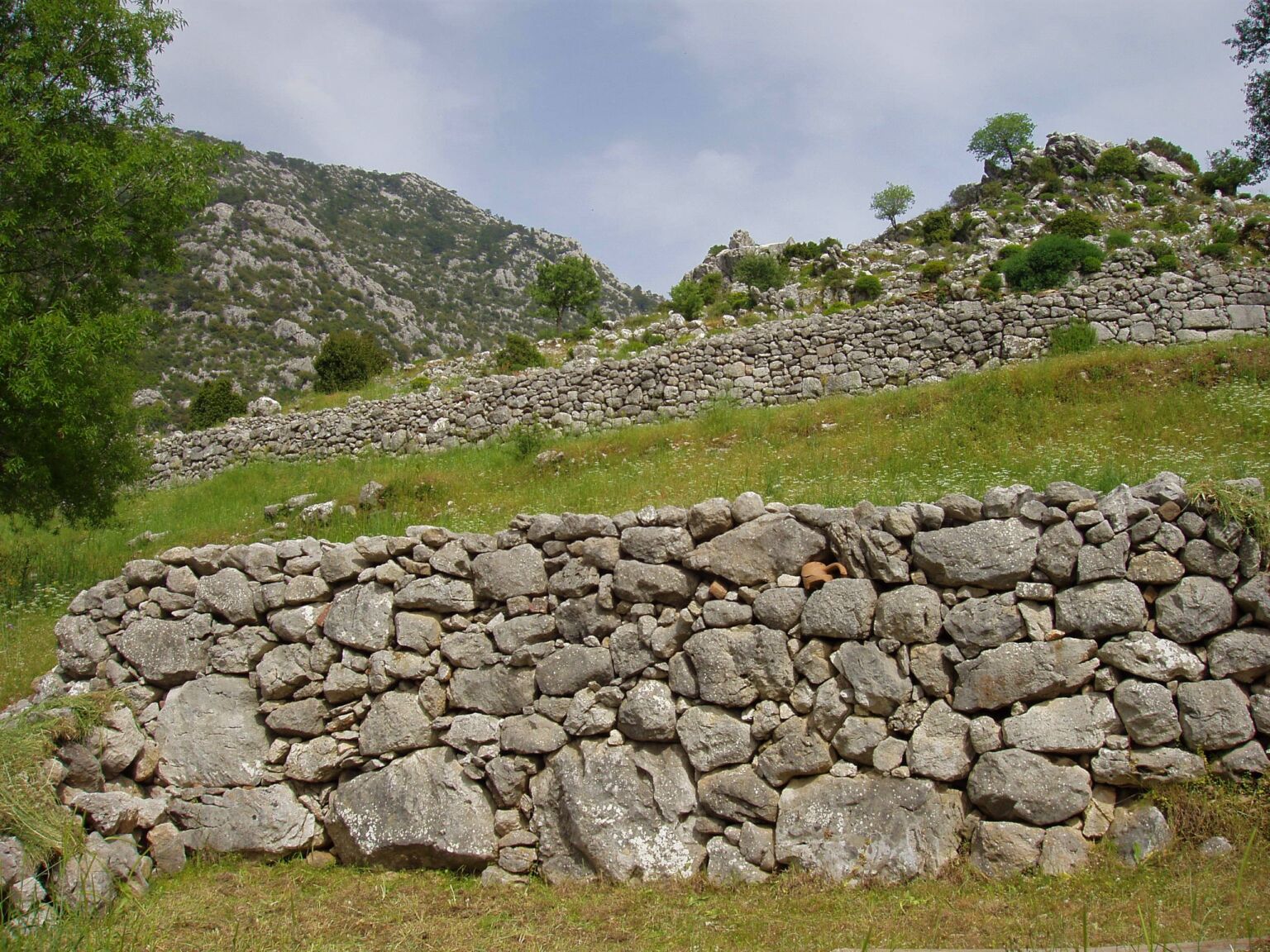 Our Hawaii collection is mostly about lava: red, and black, and rounded by the sea. When I was a small child pieces of lava would have been a swell gift. Now, not so much. But I’m thinking of introducing the medieval-looking seedpod to the Turkish pine cone. 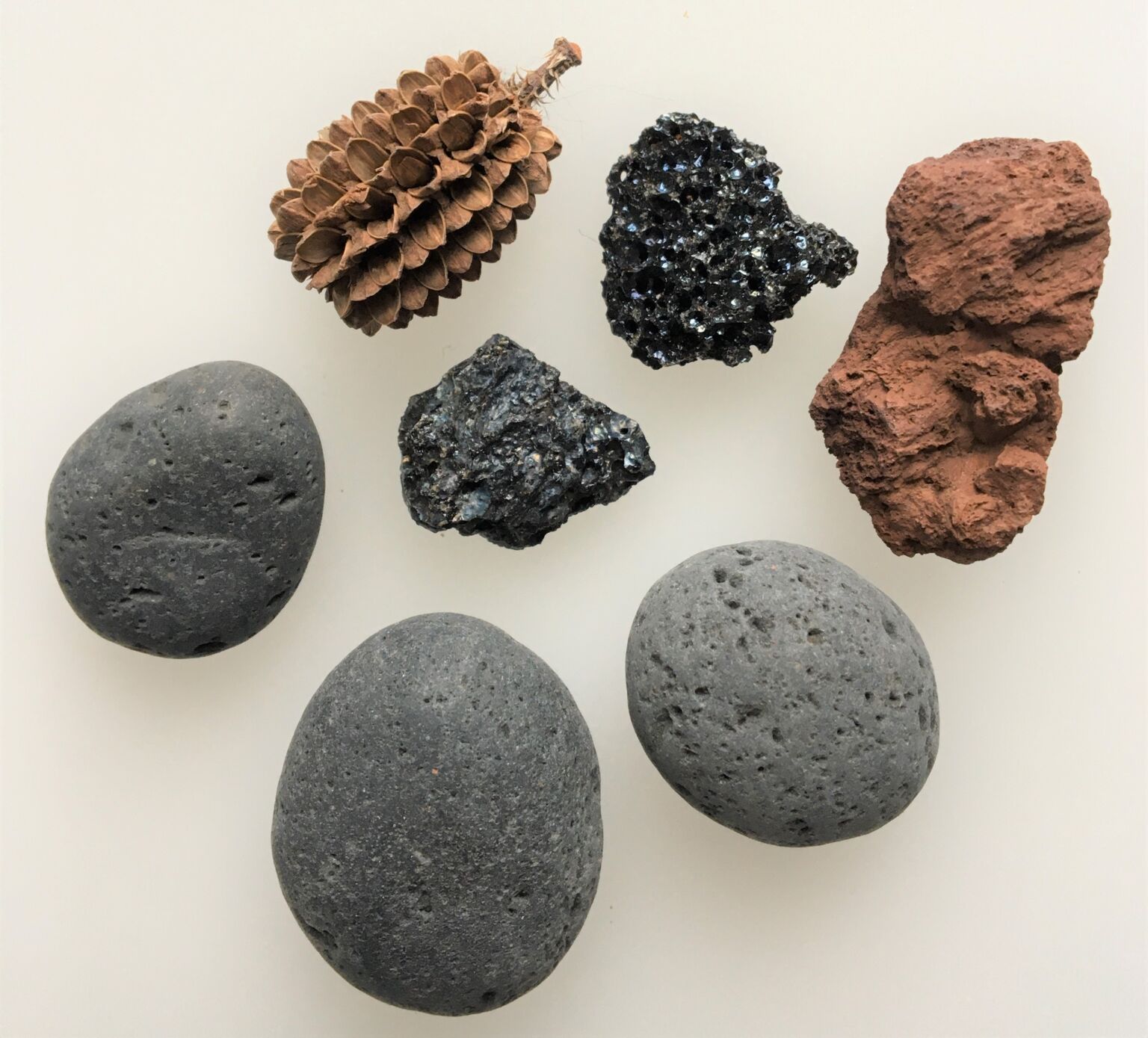 Seeing fresh lava in its various forms was instructive. 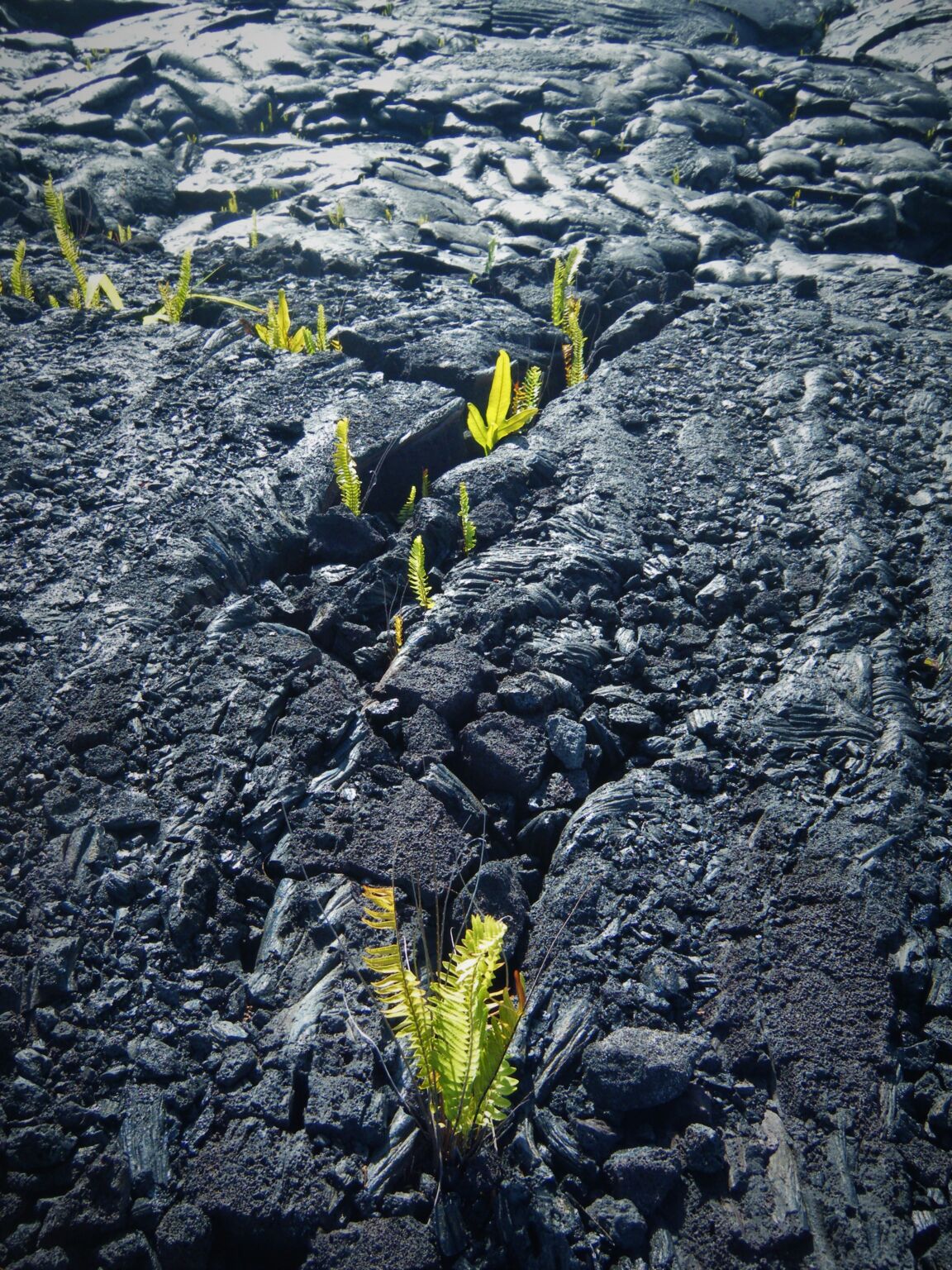 Sheila has family in Arizona (her mother was born in Tombstone)! A small herd of cousins was left some land by their grandfather. At a family reunion a few years ago, some of us visited the over-grazed and water-less property. 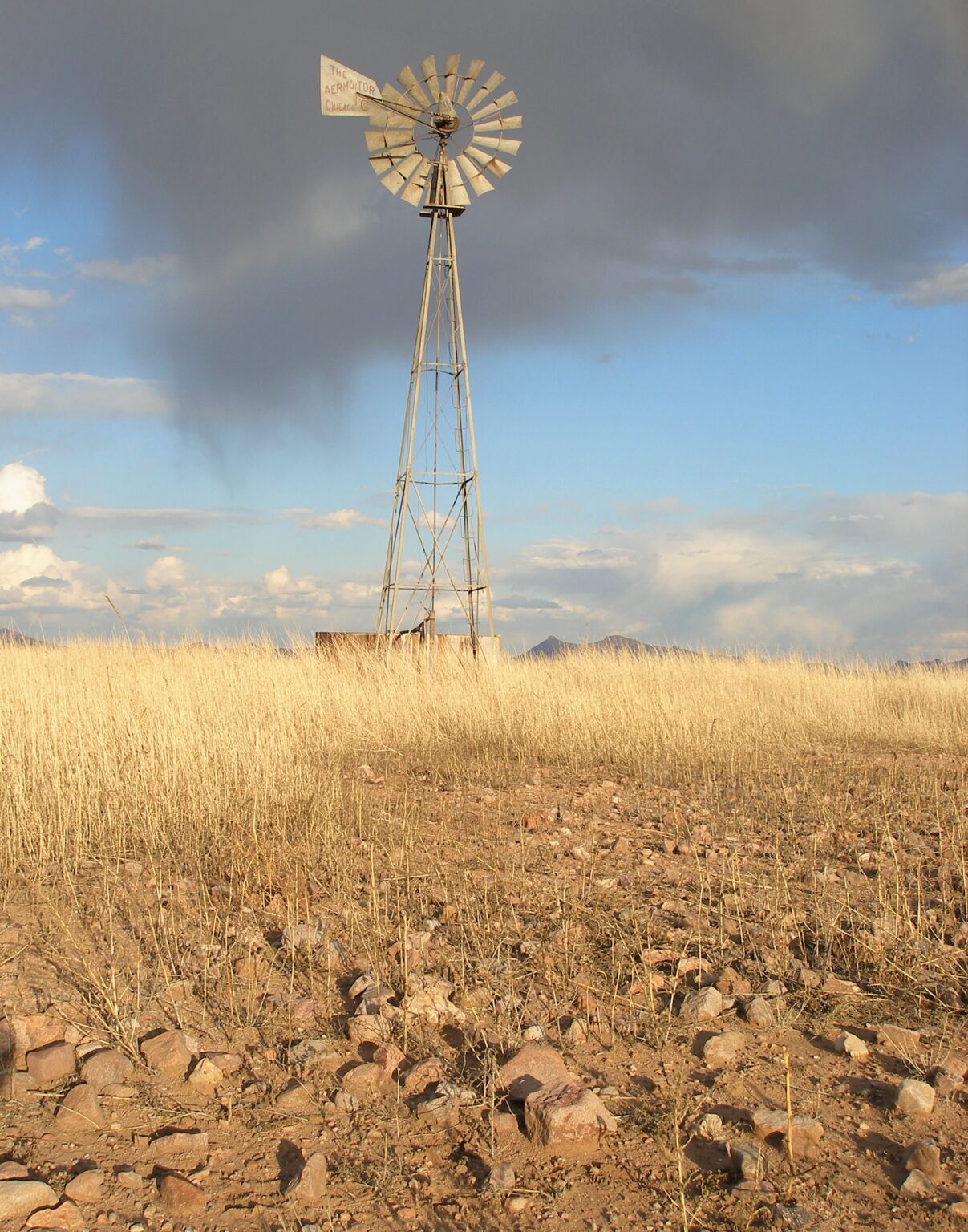 Folks from away picked up a few stones as a tangible representation of the land. 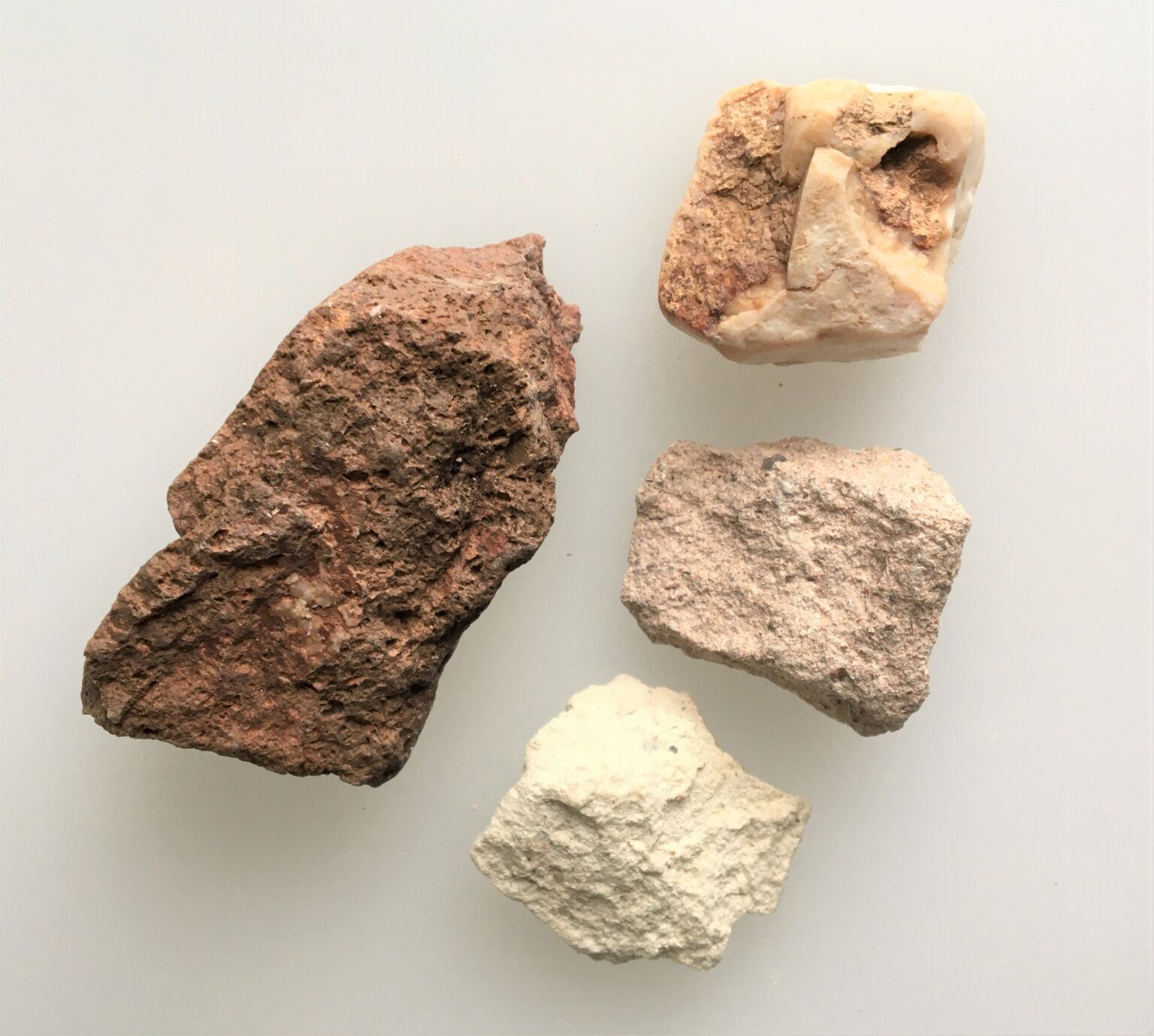 When cousin Fred, who lives nearby and is actually a rancher, saw us gathering pebbles, he observed “I see you’ve picked up some leverite”. What’s leverite we asked? “Leave her right there” he suggested, but we didn’t pay any attention. We should probably have those leverites on display. 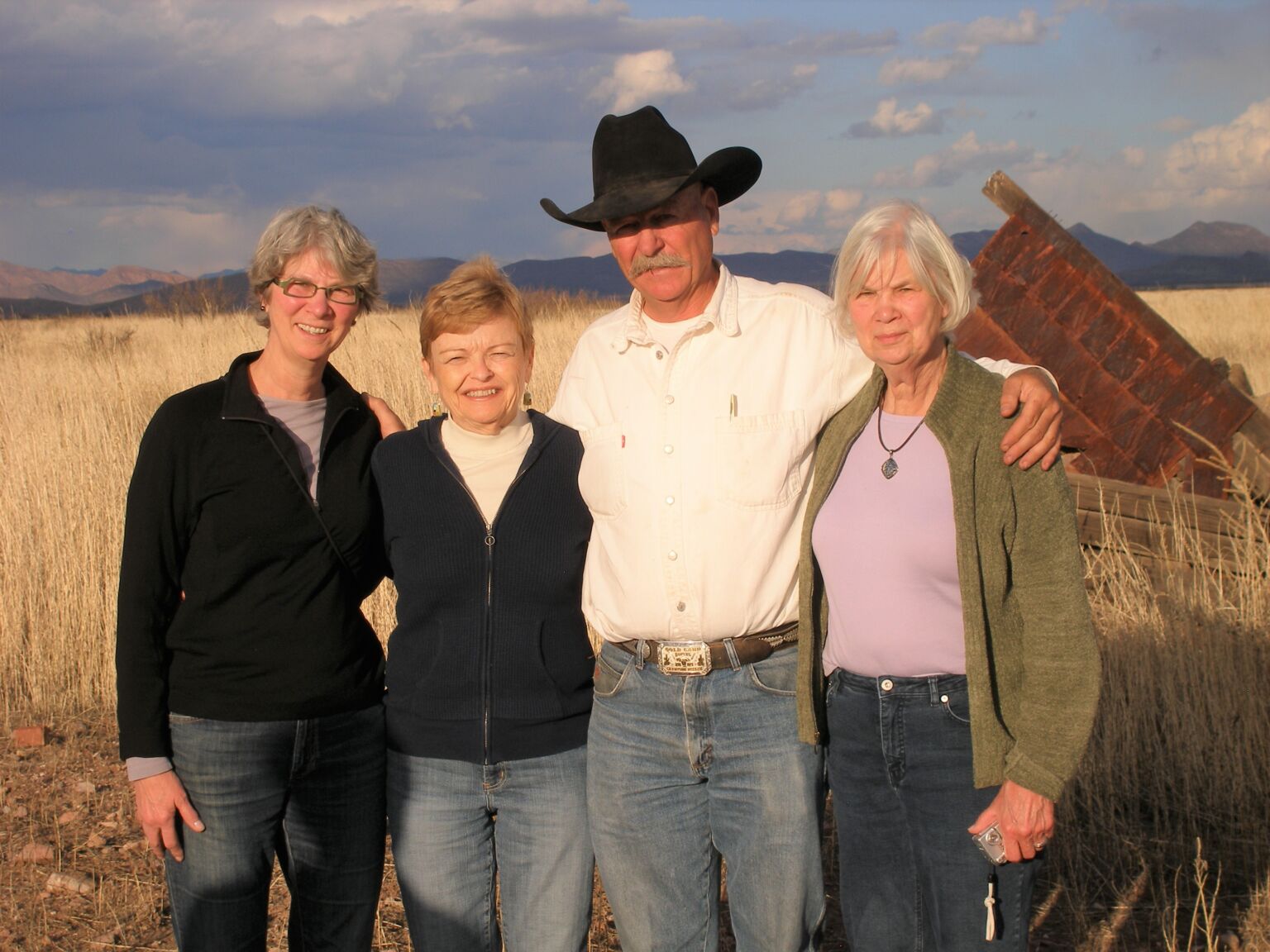 Sheila and her sister on the ends, with cousins Zona and Fred, out on their land. There is also a view in the header.

We went to Mongolia with a group of bird watchers (led by my cousin George who founded the International Crane Foundation). Sheila and I are not particularly interested in birds, so when our compatriots trained their binoculars on distant wetlands we would look at the plant life at our feet. 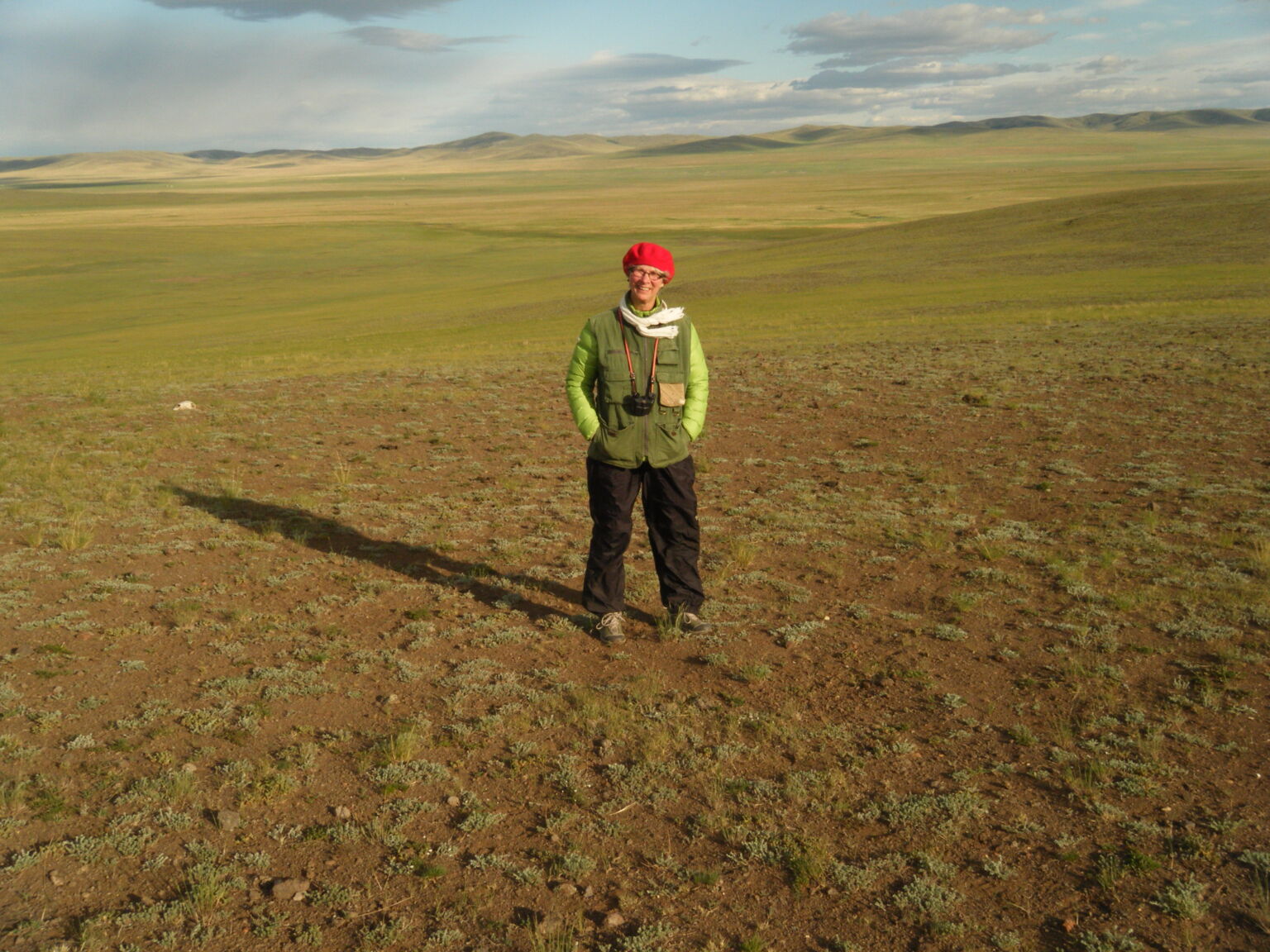 The expedition often stopped on little hills to get a good view of the magnificent open landscape. Among the interesting, ground-hugging plants, I began noticing small pieces of colourful stone. 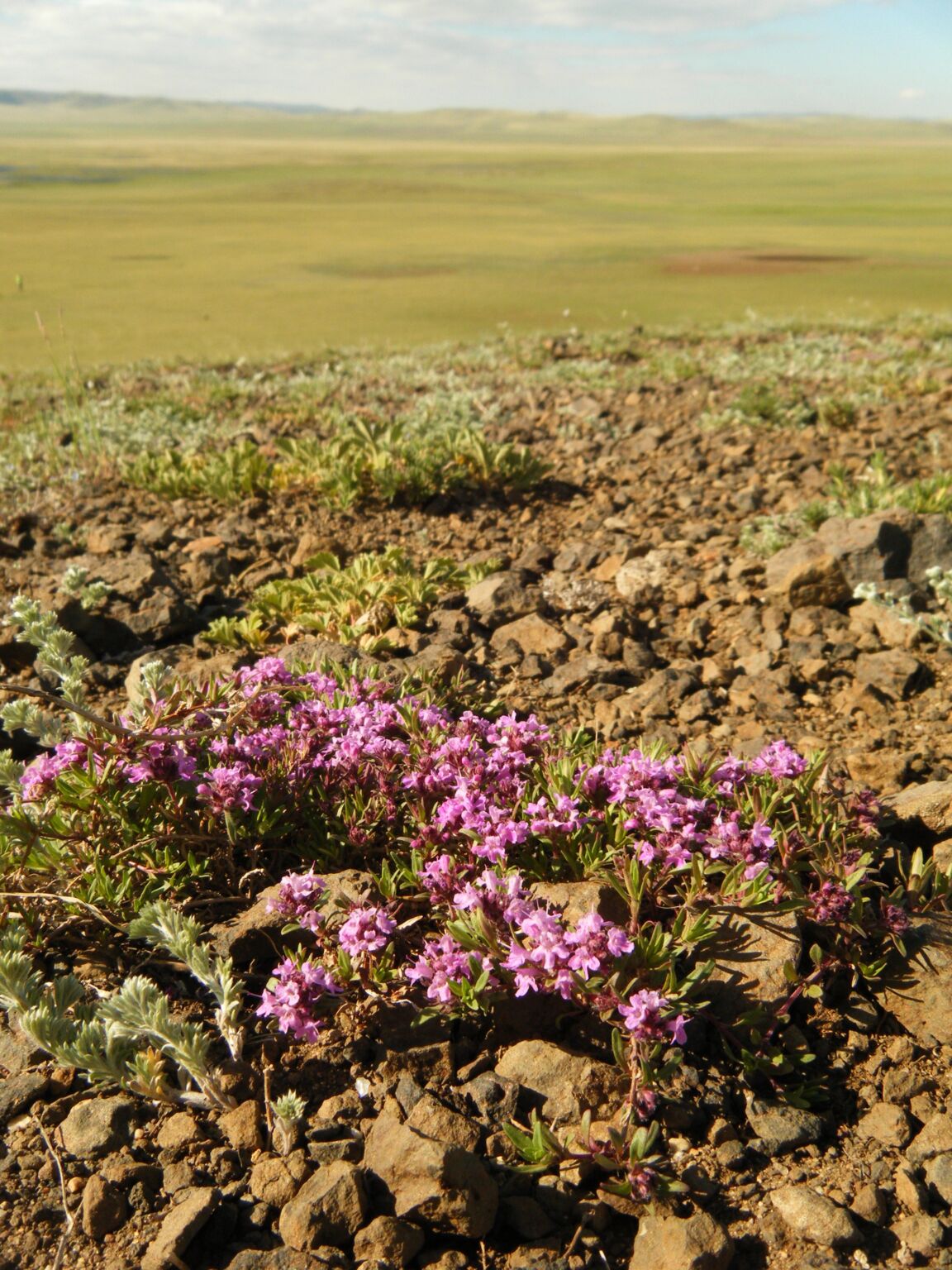 Eventually I realized these stones had been chipped and shaped by prehistoric people. At the end of the trip I learned that the stones were probably worked tens of thousands of years ago. 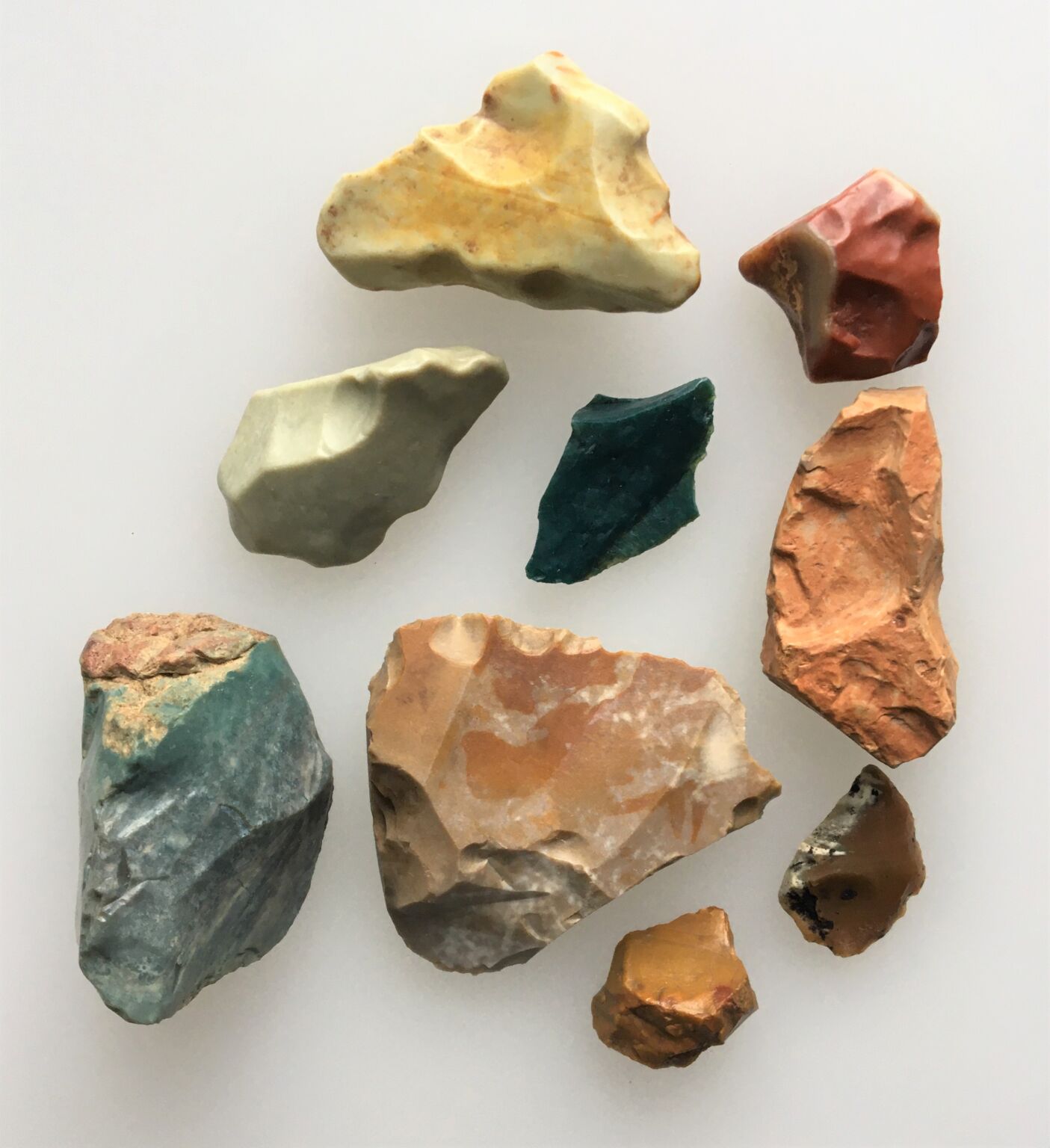 In the middle of the empty steppes, picking up colourful stones felt very natural. Back home I realize these truly are leverites and should have remained where they had always been.

What did I learn

On reflection, most of these little collections don’t spark a lot of joy, plus sea shells, and seed pods, and paleolithic stone tools are probably legally or morally inappropriate to bring home. When you are on vacation, there is lots of time to think about what you gather and toss into the corners of your suitcase. Maybe give your gathering instincts a second thought.

Over the years I’ve also realized that where a particular pebble came from is quickly forgotten. So these little collections are kept in labeled tins and bottles and stored in massive underground bunkers. Try this at home. 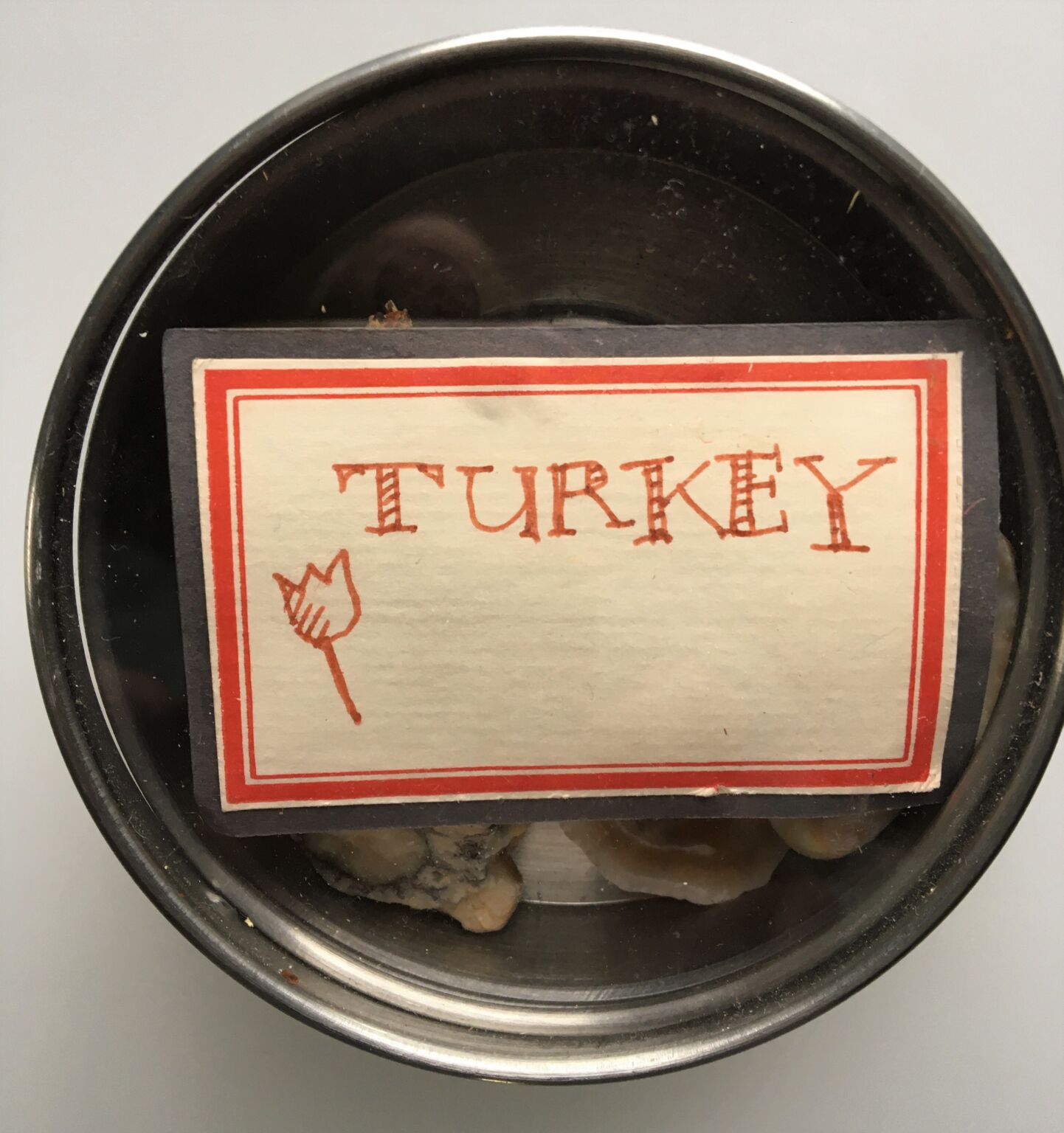