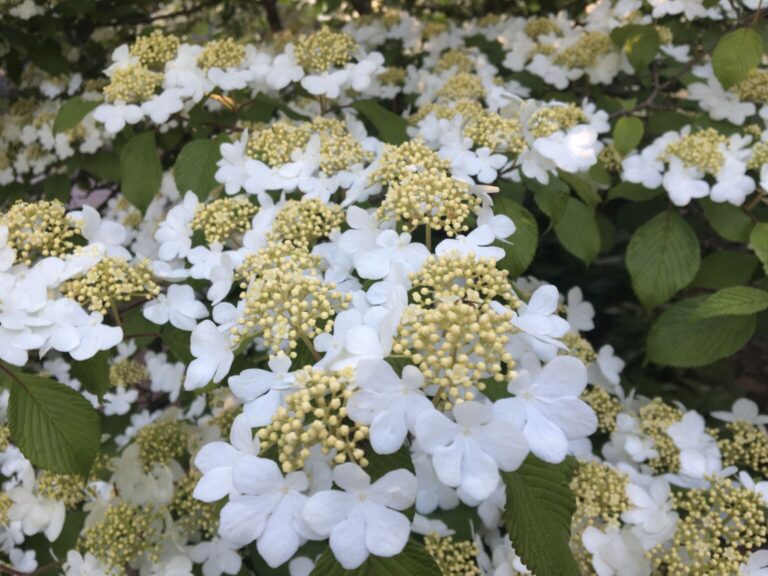 In the nineteenth century many people gave their houses names. For example, Clifton, Rosebank Cottage, and Renova Cottage are names of houses at various Nova Scotia Museum sites. It amused us to name our property Rockburn, because it is rock rich and has sort of a brook (burn), and Sheila grew up near a community called Rockburn. Some years ago we commissioned a stone carving with that name, and erected it at the entrance to the garden.

On Saturday I noticed our little standing stone was bathed in golden hour light. Then I remembered it was the solstice and the spring of our confinement had officially come to an end. Also time to conclude Spring in the Cove posts. 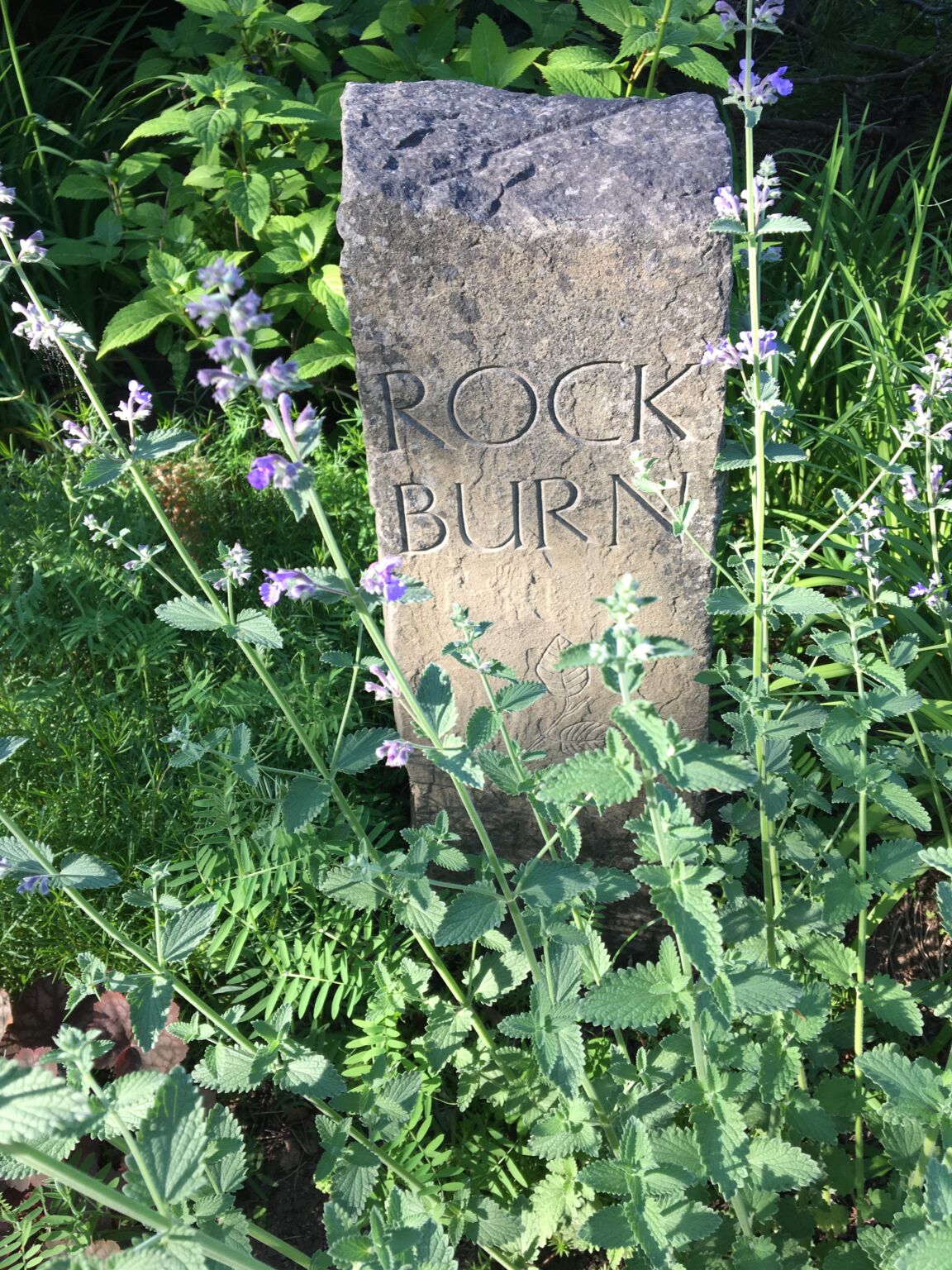 Our garden has many rhododendrons, blooming over several months, but we have just passed their peak and most will be finished by the end of the month. This is what the oldest part of the garden looked like at its best. 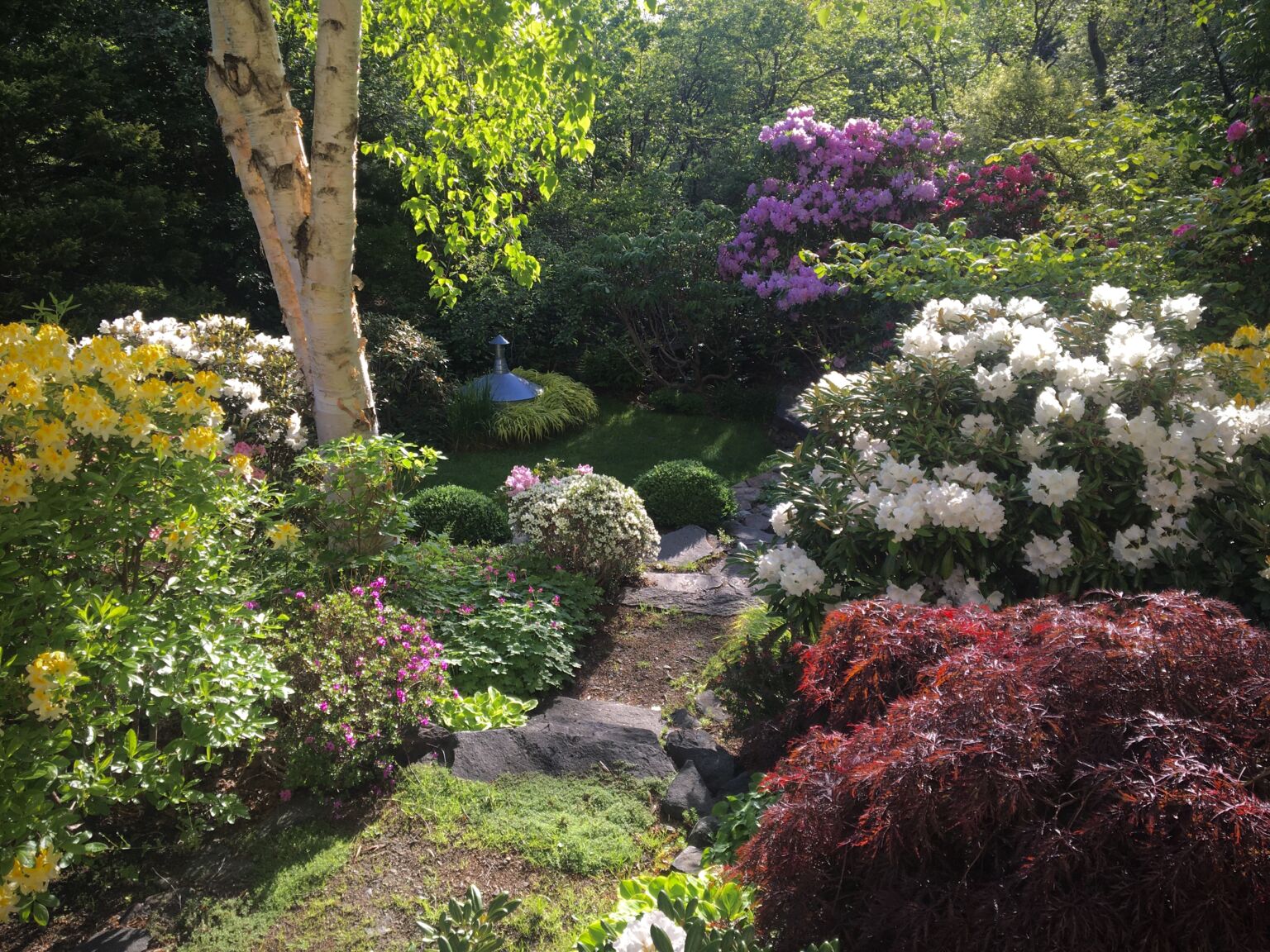 A garden is constantly evolving, as plants grow or diminish, and gardeners change their minds. Here is how that same view looked about twelve years ago. We all probably looked better twelve years ago. 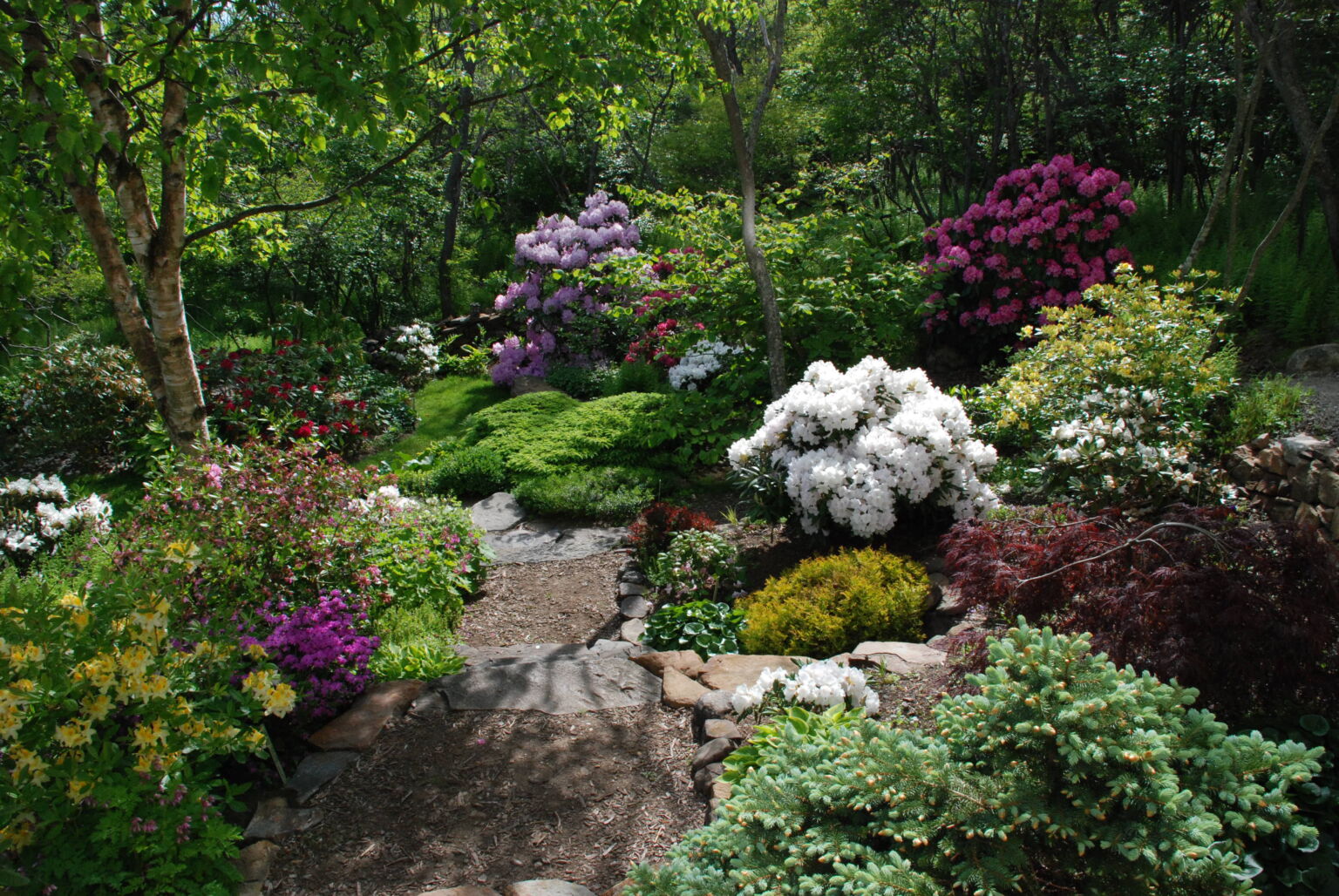 The early morning sun finds its way into our little valley in a series of strong beams of light. This makes it worthwhile to get up and ramble in the garden and experience the show. Here I am out on our road at about 5:45am. 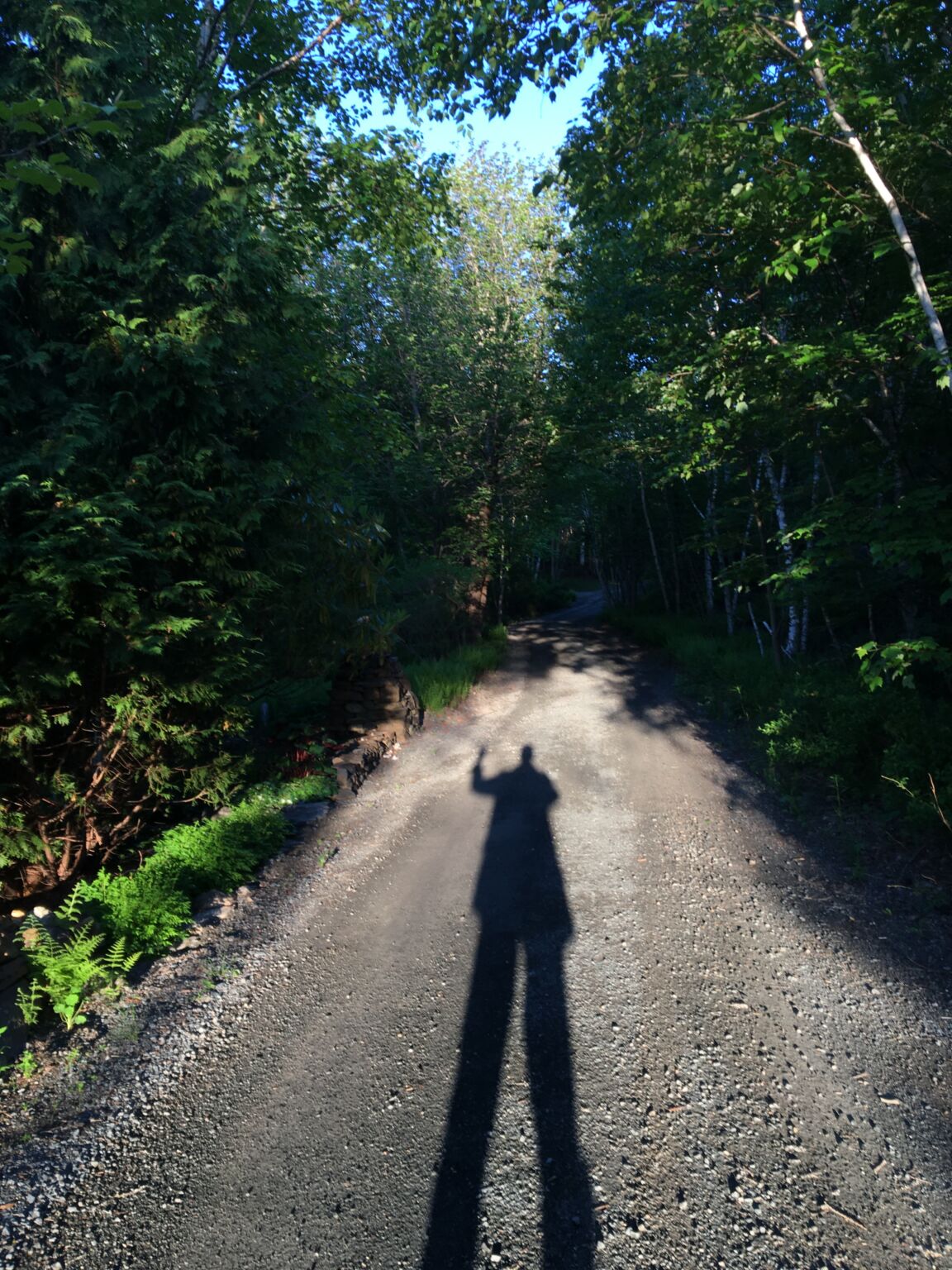 A rhodo flower truss in a spotlight. 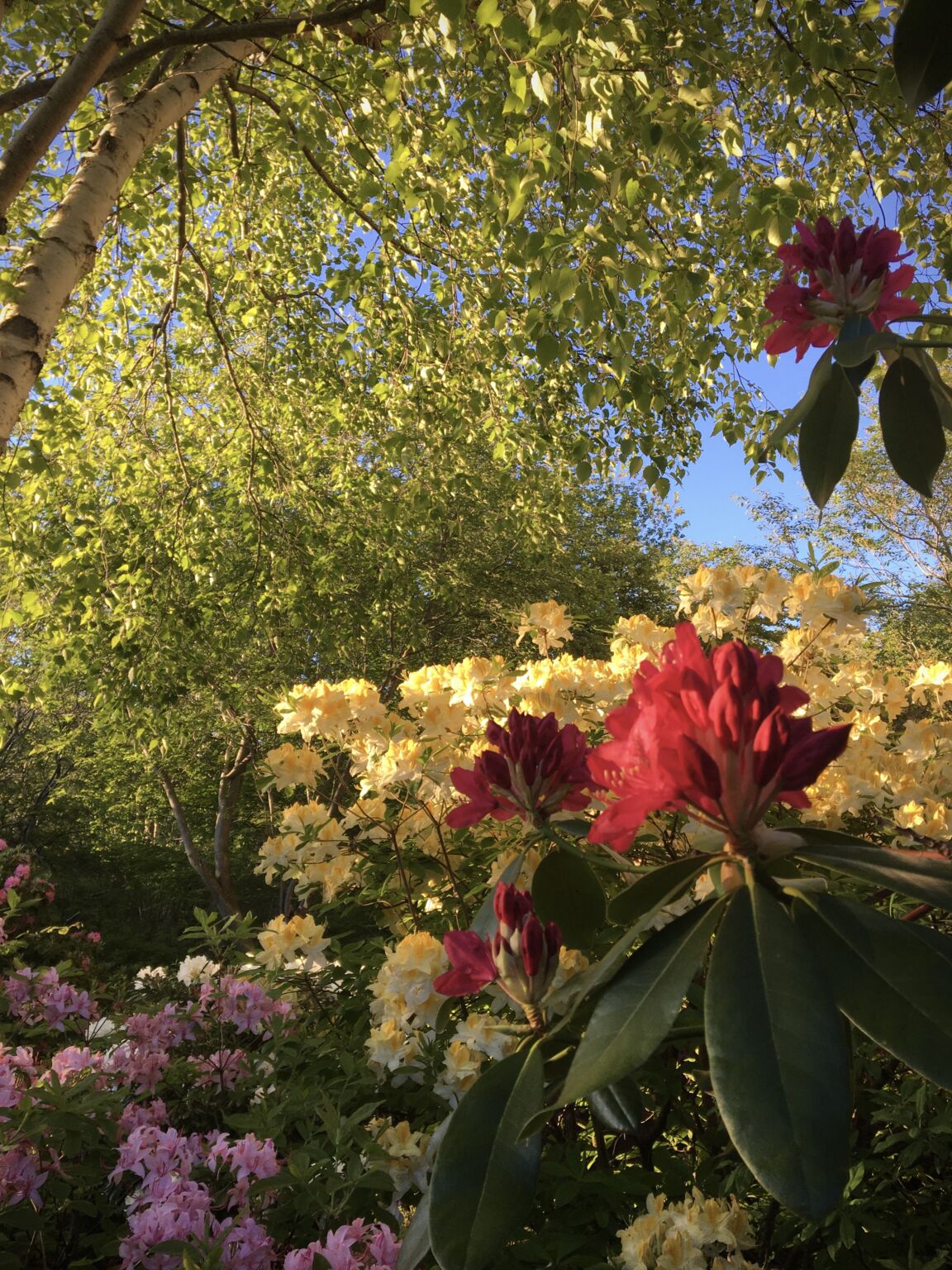 Late afternoon light is good too. 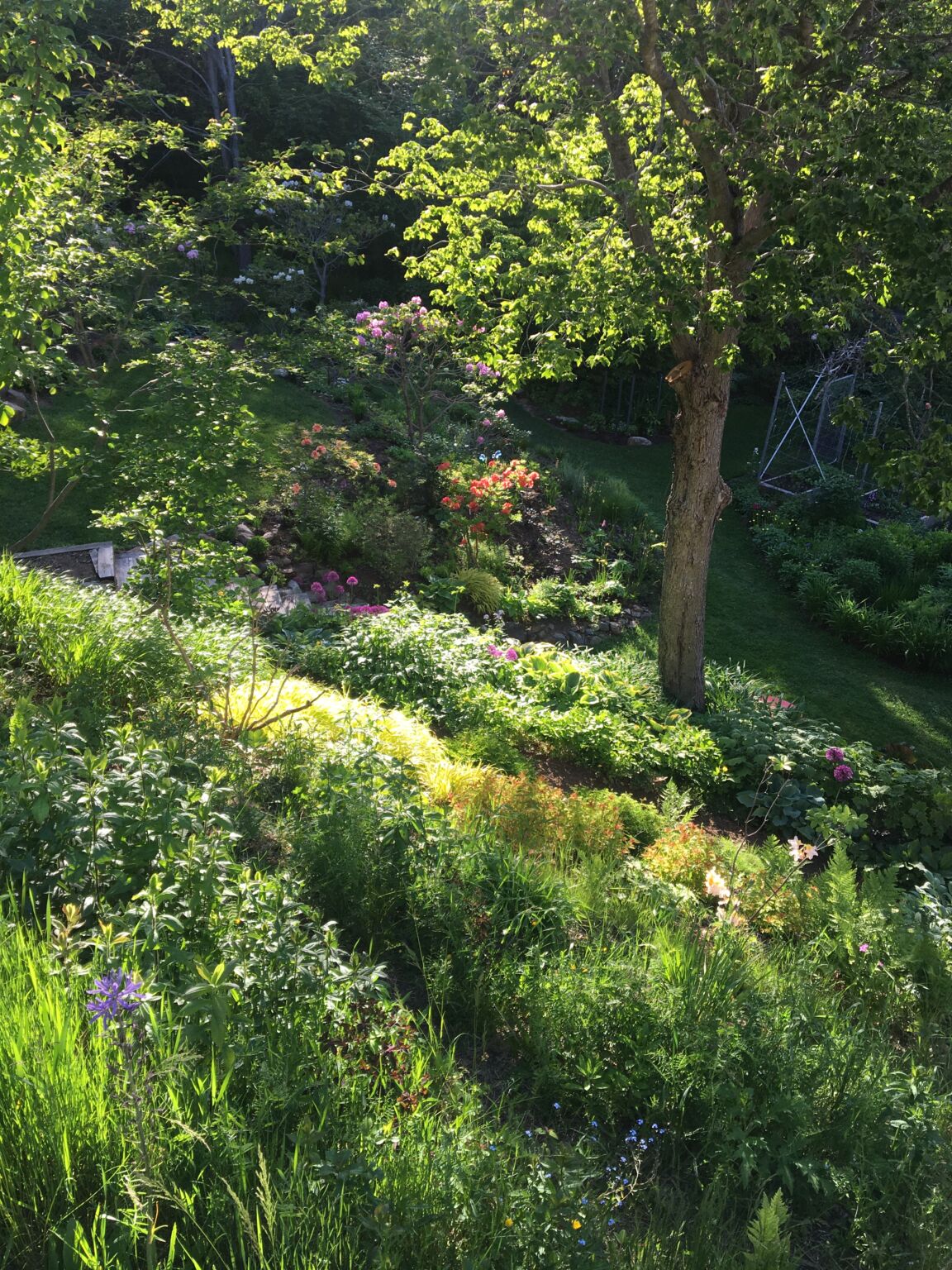 One plant we grow that attracts attention is the Himalayan blue poppy. Blue is a desirable flower colour, and this poppy emerges with dialed up, blue intensity. 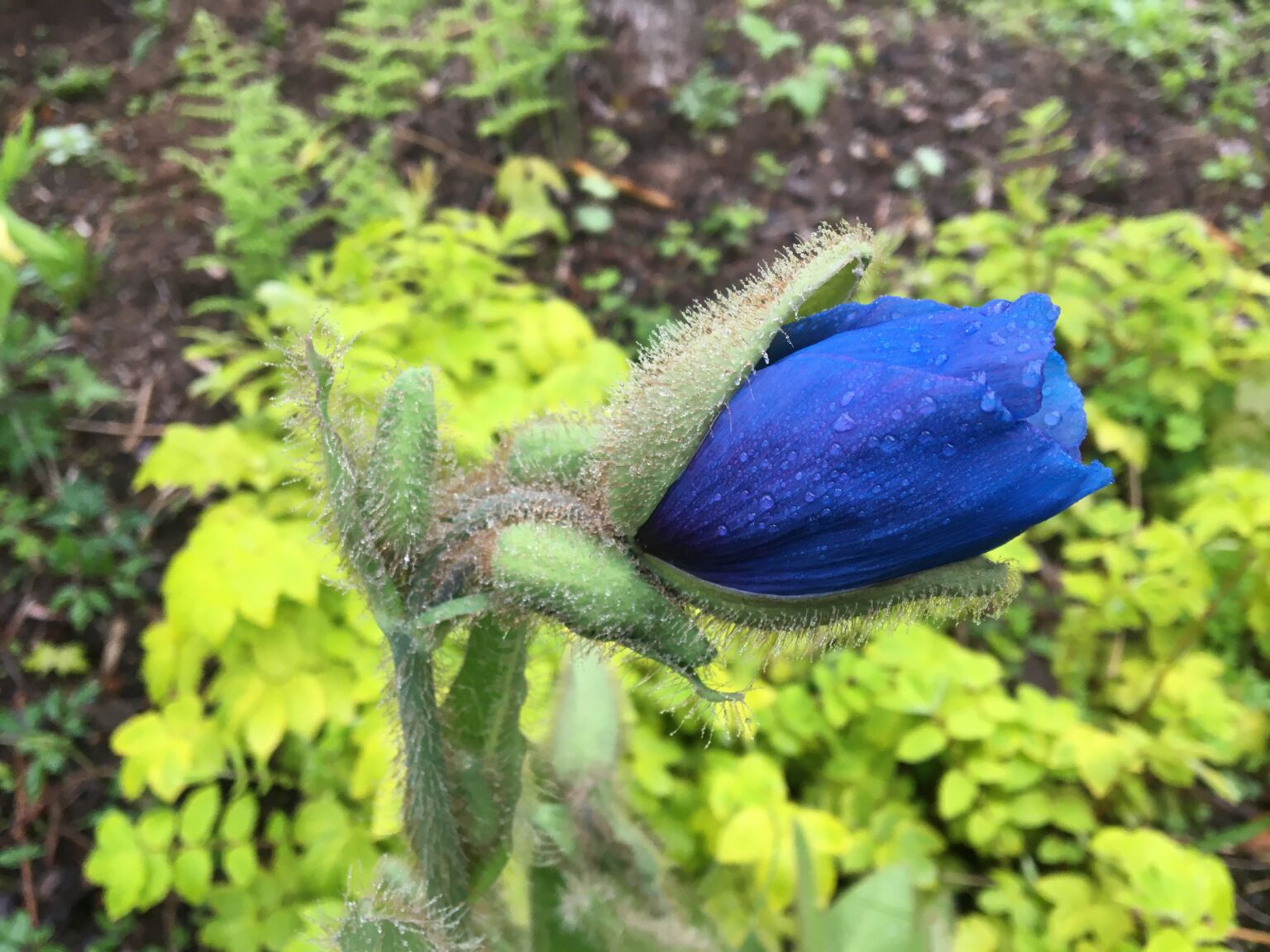 The colour fades a bit when the blossom opens. 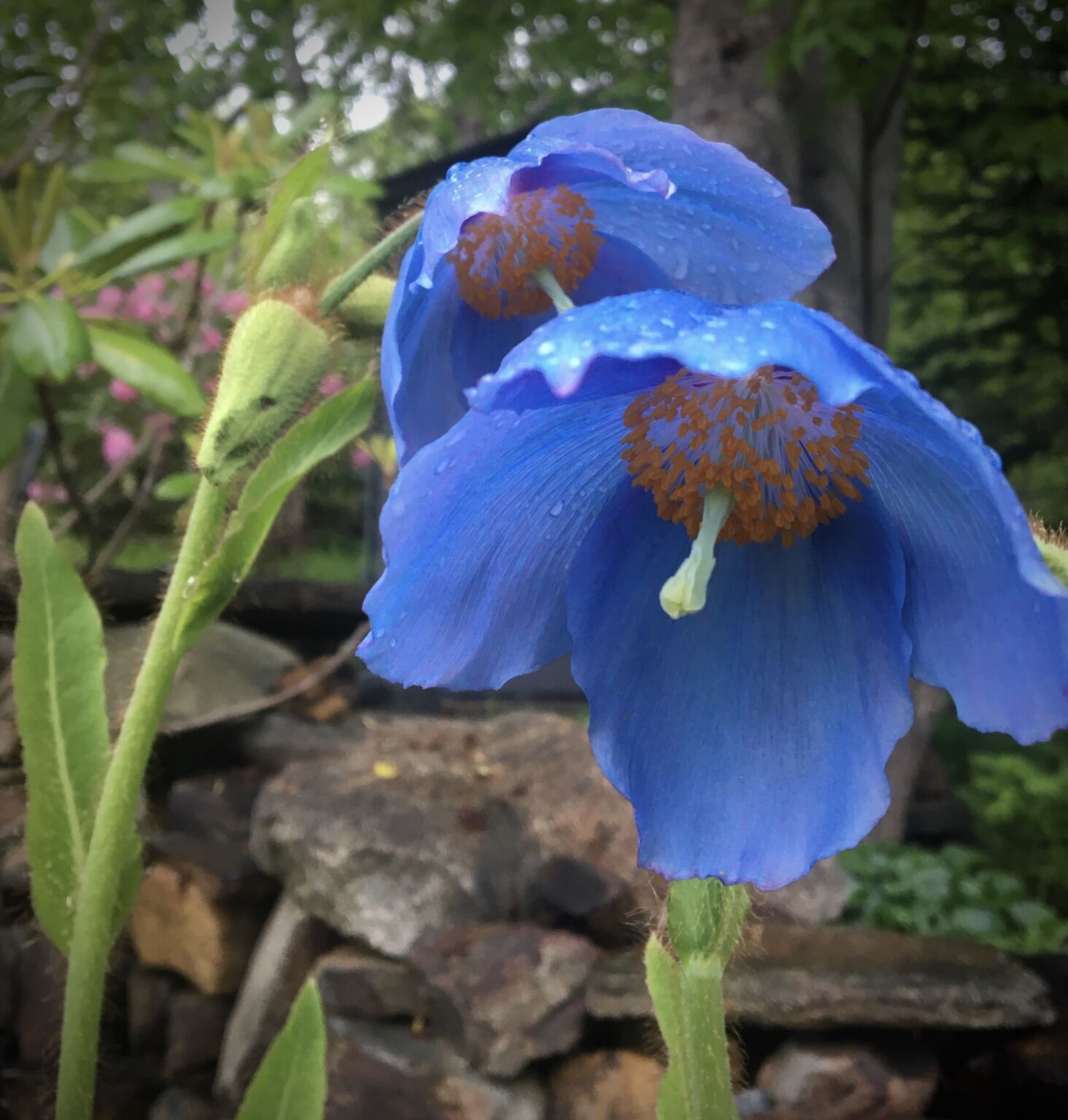 Backlighting is a good look too. 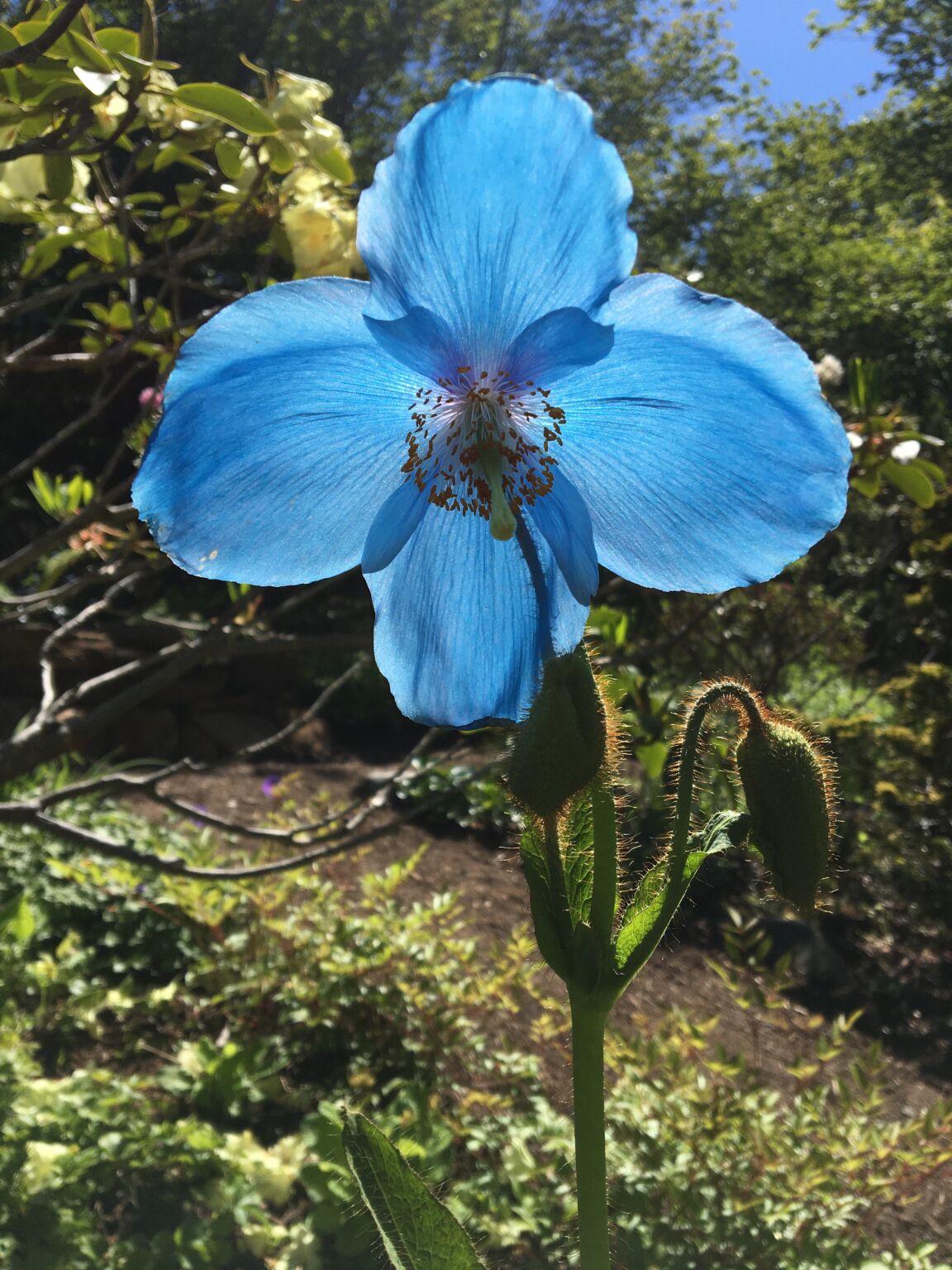 These poppies can be hard to get established and have a reputation for being fussy. They are native to the foothills of the Himalayas so our foggy coastal garden reminds them of home. The blue poppy is the national flower of Bhutan and when we visited some years ago, we saw this specimen on a very misty morning, on a mountain pass, 4000 metres up. Looks like our Atlantic shoreline, don’t you think? 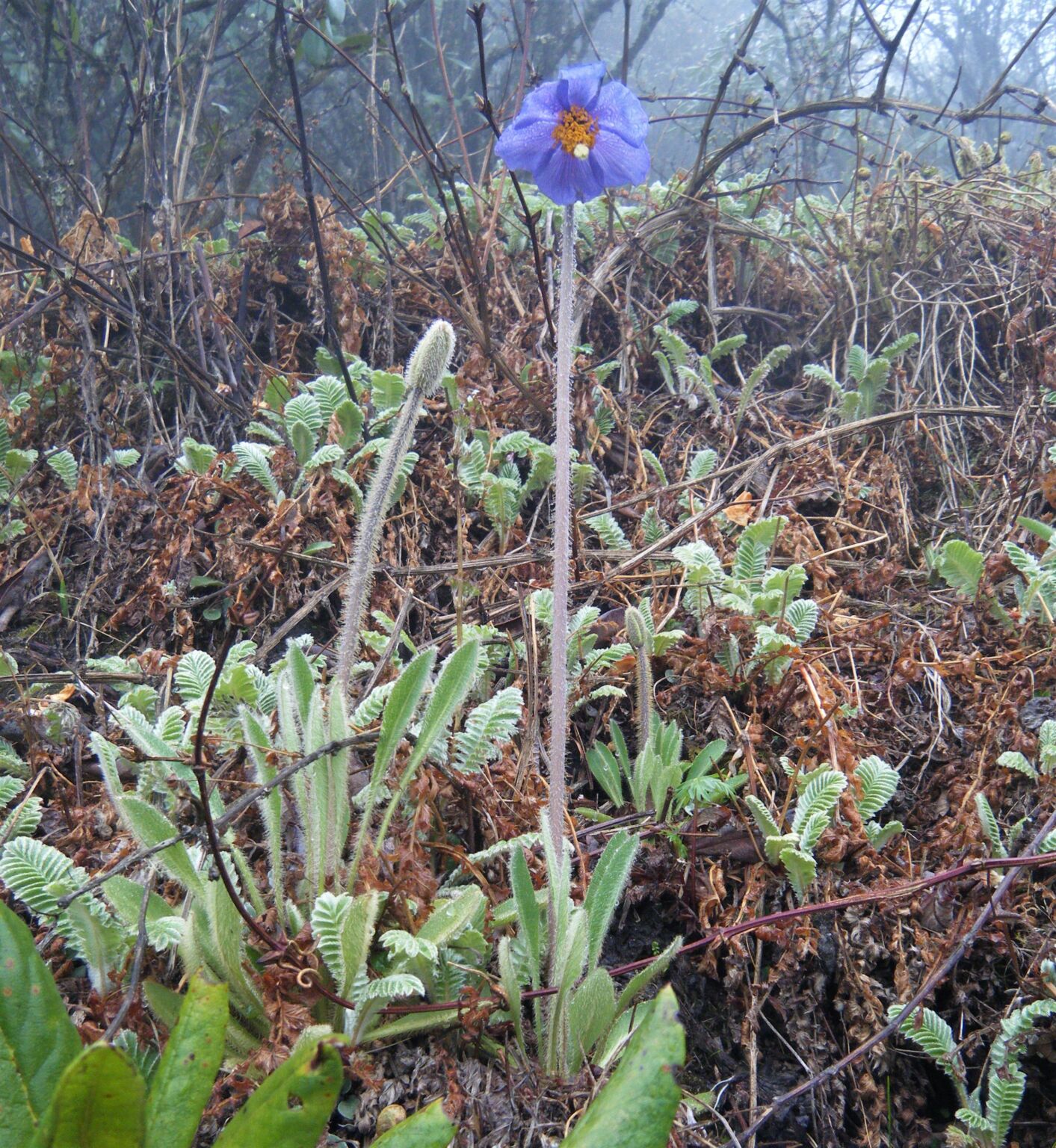 In the pandemic we have learned that good PPE is essential. These days I’m very mindful of my own safety gear whenever I go out to garden. Getting another infected tick bite encouraged me to order permethrin-treated socks, pants and shirts. And nobody cares what I look like, so trousers are always tucked into socks.

I have several types of gloves that allow me to do fine weeding, or protect my hands when handling rocks. Steel-toed shoes are worn if I’m mowing the lawn or might have the opportunity to drop another rock on a foot. There are several levels of sunscreen but on most days I’ll also wear a black nose guard to save my sun-sensitive nose. And people complain about wearing pretty cotton masks. 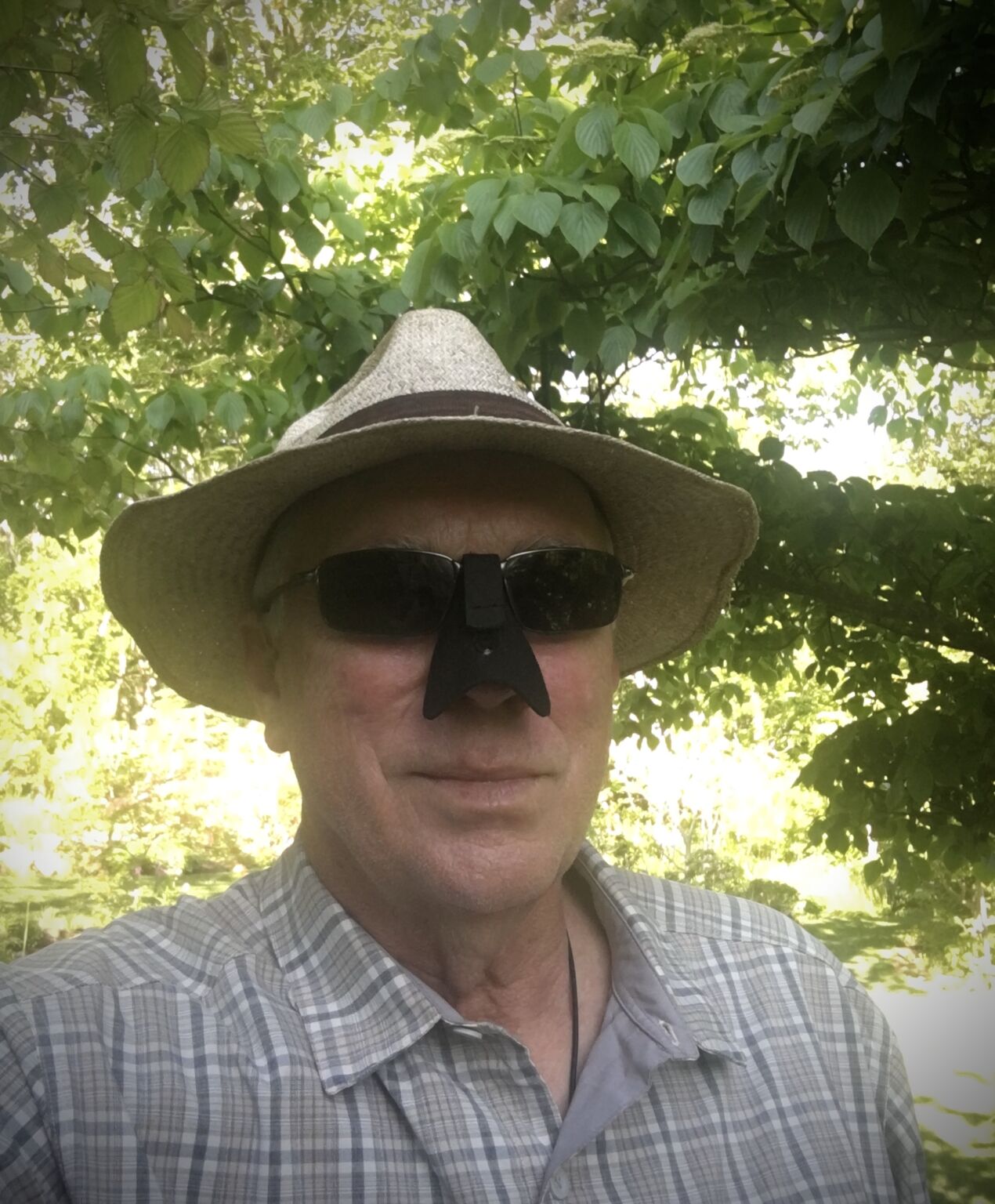 WARNING: the following contains photos of slugs and spiders. Viewer discretion is advised.

While the slugs are on their way to dine on pansy, they get distracted by the yeasty aroma and slither  into a yeasty death pool. When the saucer was emptied 18 slime balls had died *happy.* 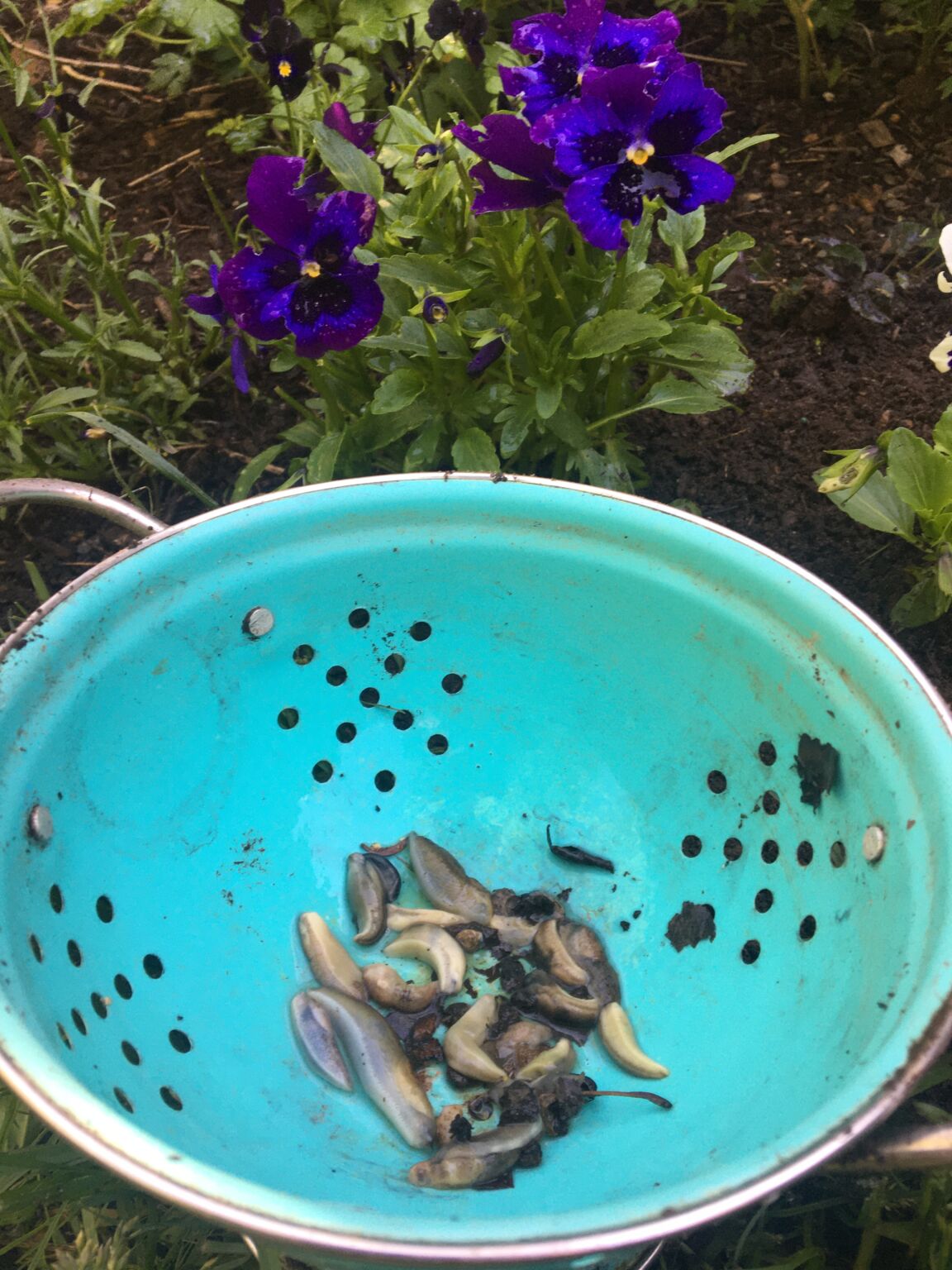 Twitter’s response to this photo was EWWWWWWWWWW!!! 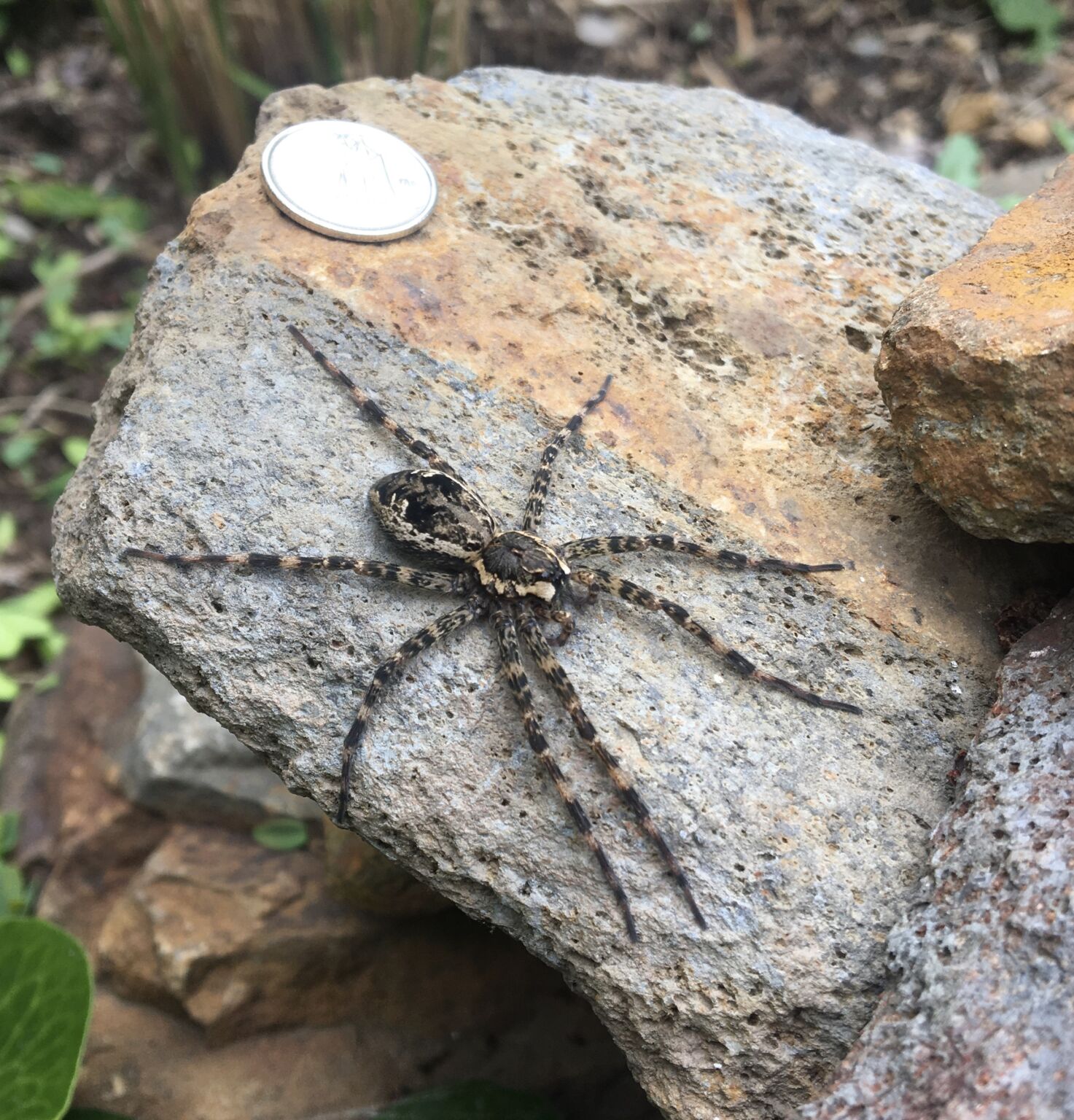 It appears to be a fishing spider of the type that is usually found beside water catching aquatic creatures. The rock the spider sits on conceals a cleanout for the pipe to our septic field. Maybe buddy was confused by the sound of running water under its many feet.