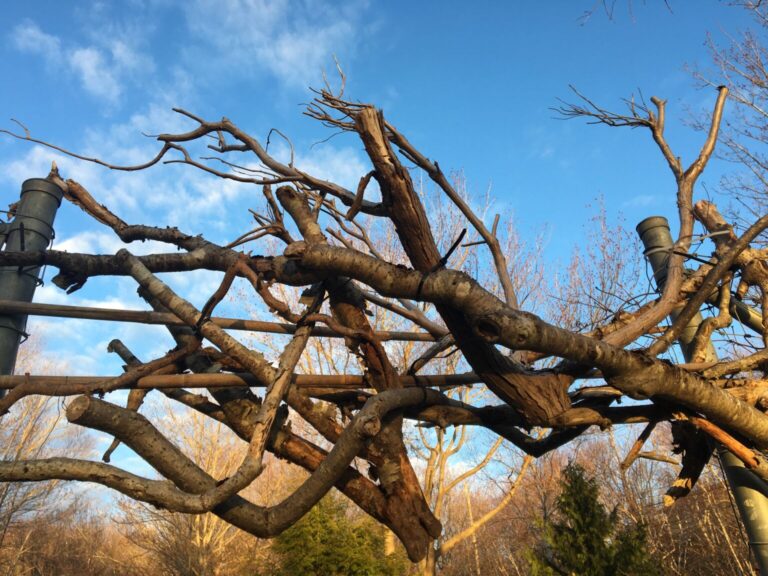 So, our landscape has evolved and matured so dramatically since my last report I don’t know what story to tell. Back then, discovering colour on a large rhododendron bud felt like a celebration. 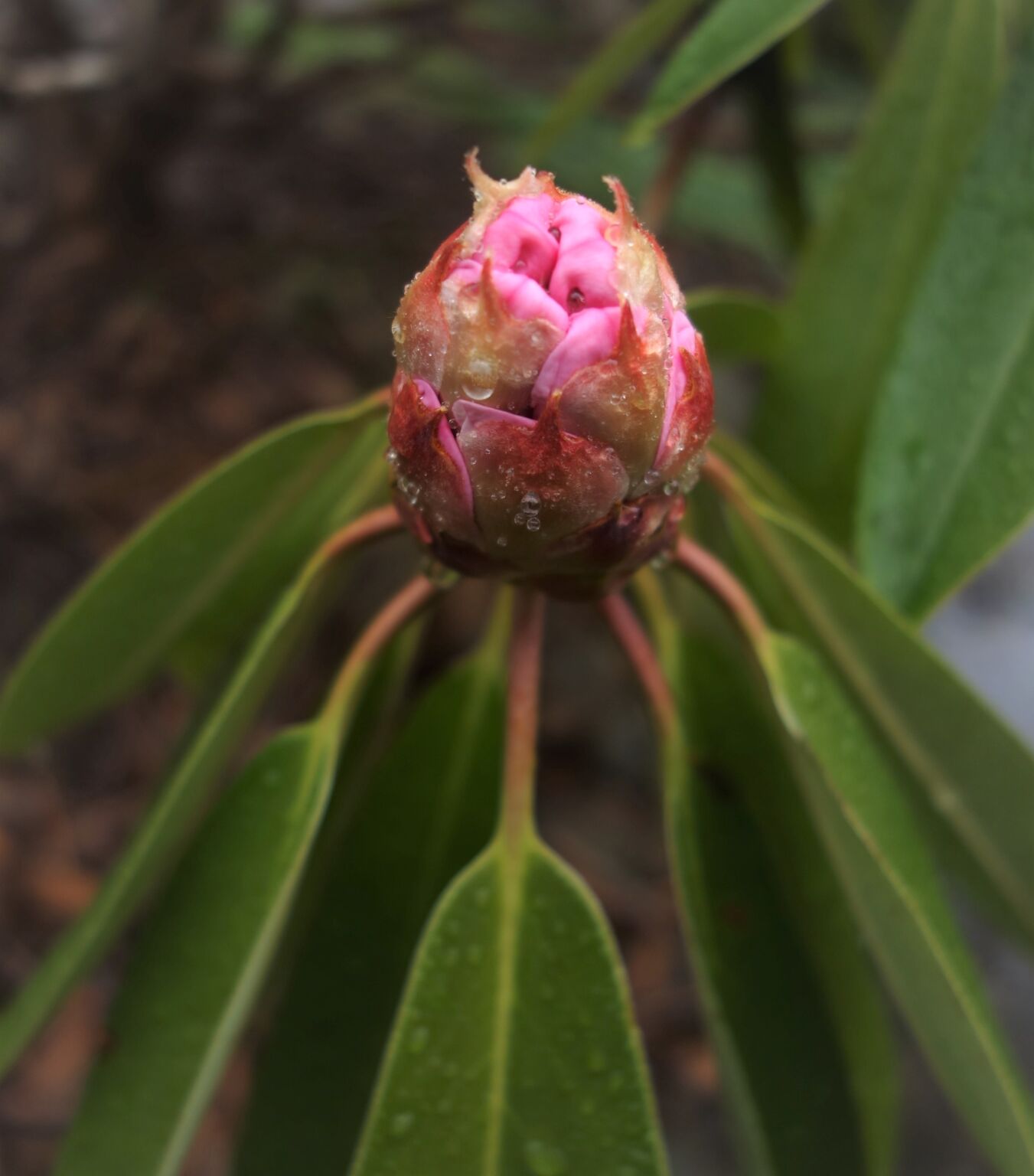 Now that bud has opened into a massive and very fragrant bloom. 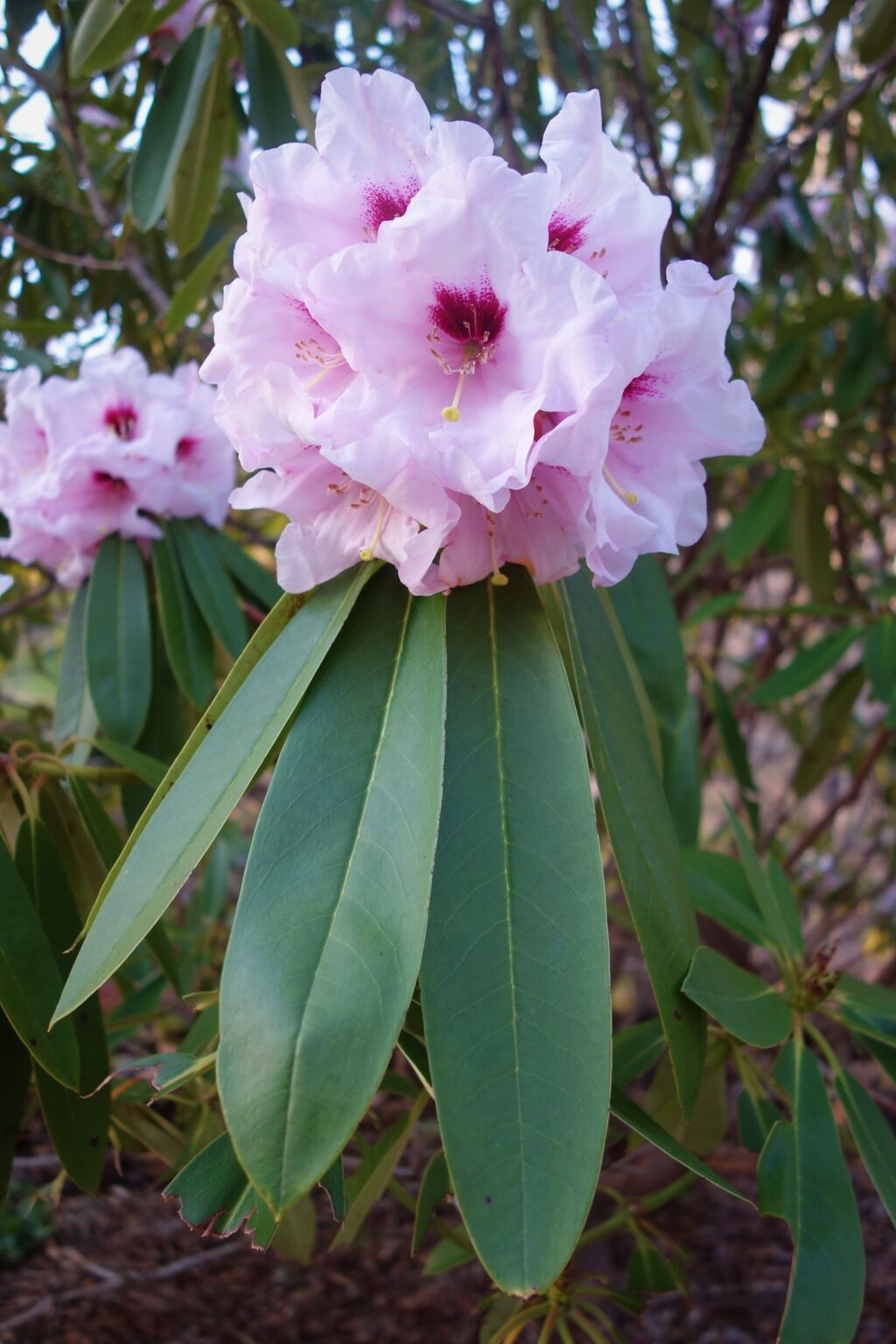 I could show you many other pretty flowers, from very tiny alpine plants, 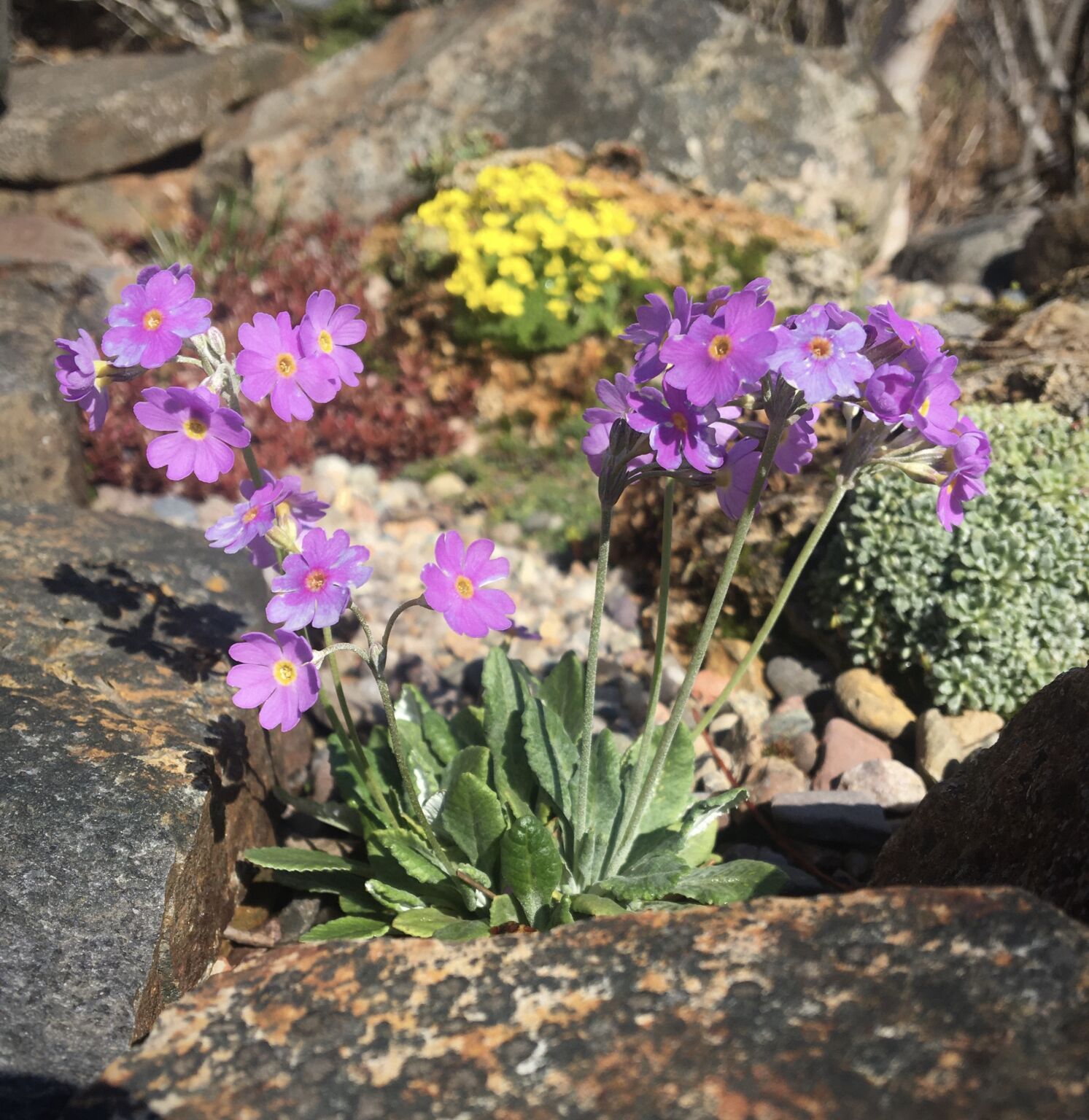 to towering rhododendrons, that are native to China. 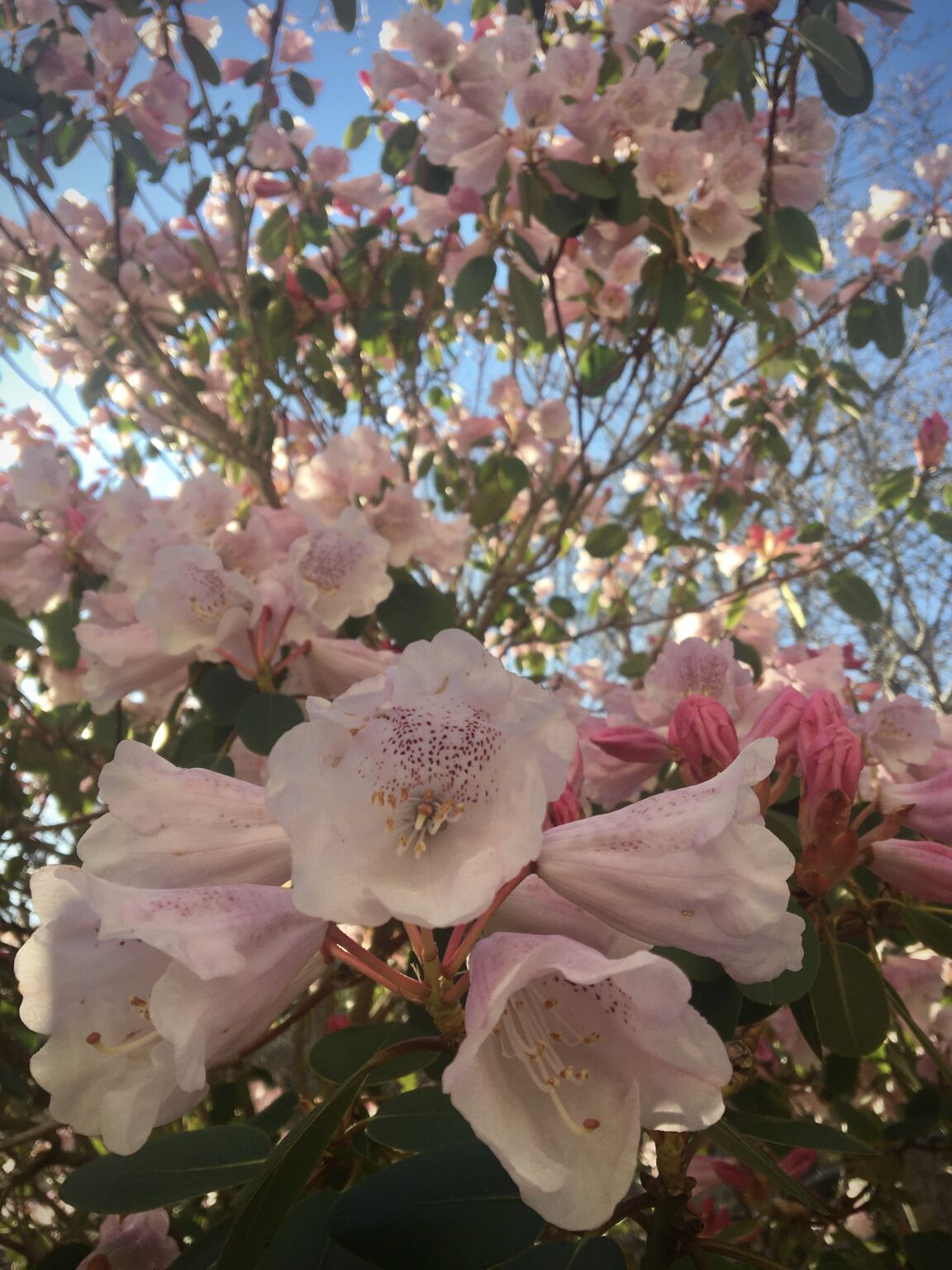 But this is not really a gardening blog, so I’ll just confirm that we feel very lucky to be able to shelter in a place that gives us lots to do and enjoy. 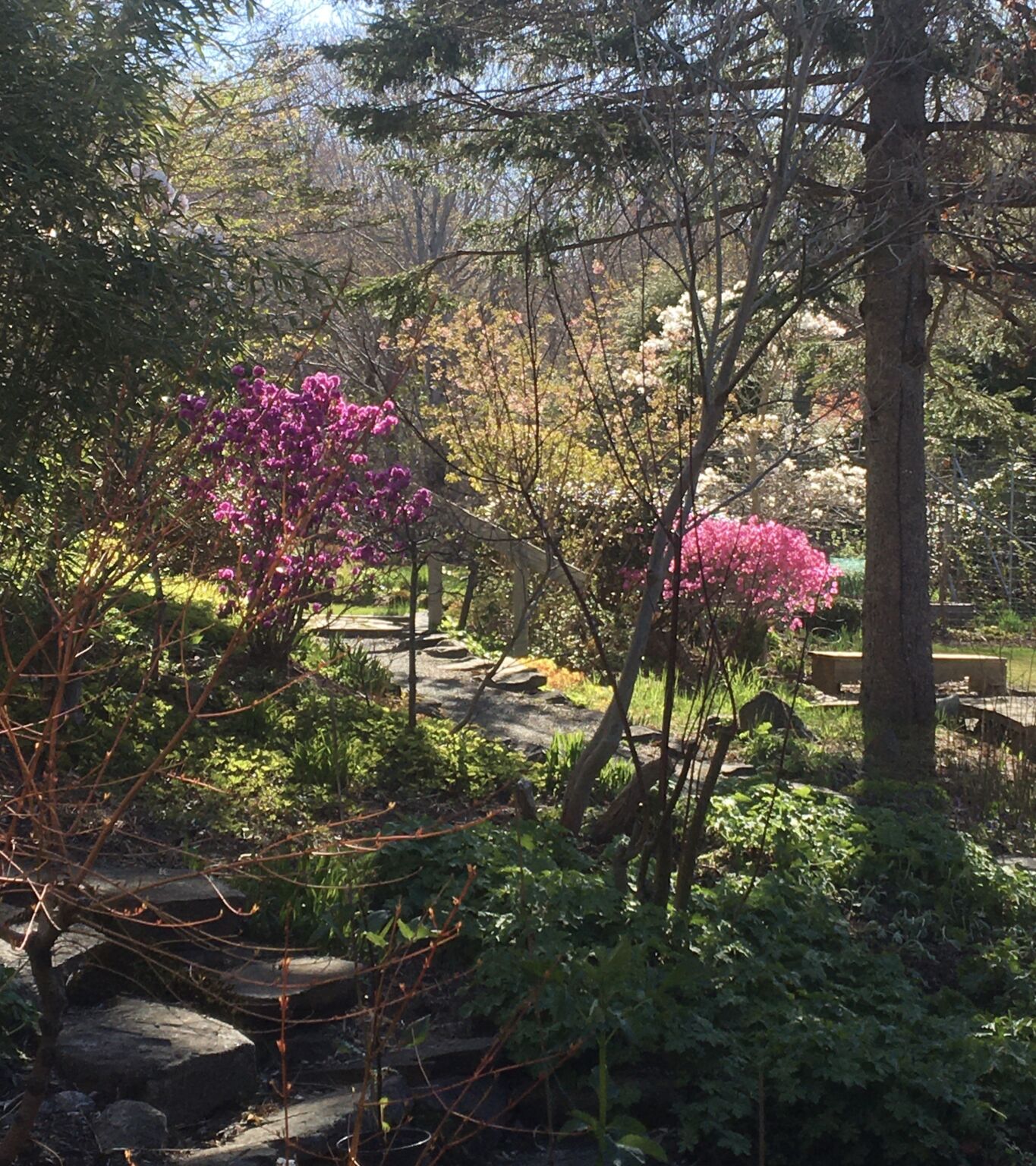 Here is a little case study of how easily I’m amused. Years ago we had a little fenced area installed to allow us to grow a few vegetables that were protected from the ravages of marauding deer. The wire is eight feet tall but the gates were shorter so I began assembling arches of odd shaped branches. New twigs were added as they turned up, and old ones rotted away. In my mind the installation looked like the collections of antlers sometimes seen in hunting lodges. A good look from my point of view.

A couple of weeks ago I noticed (from the kitchen window) how early morning sunlight illuminated my arches. 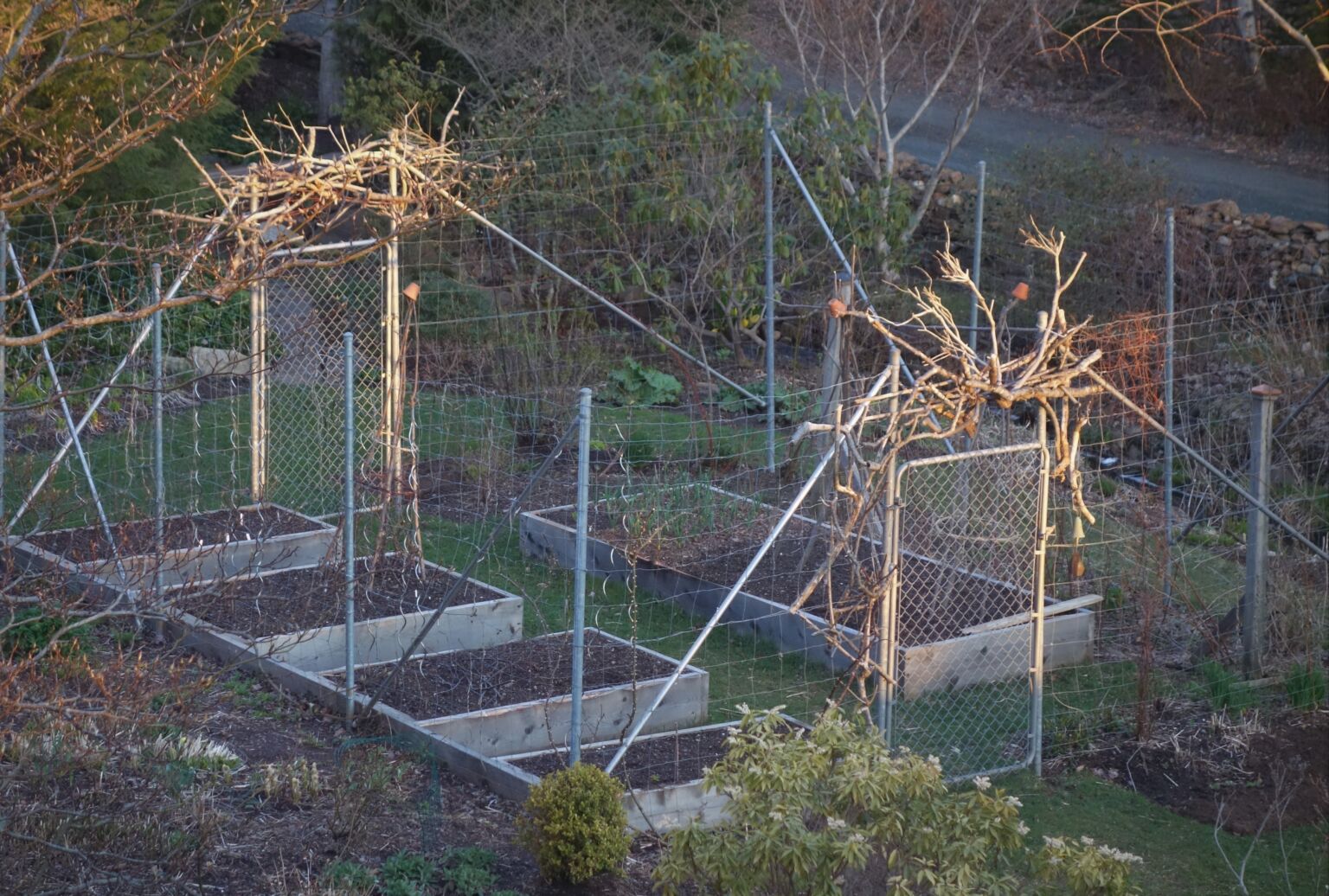 I’ve taken to walking in the garden early in the morning and can now estimate time by when a ray of sunlight hits the twigs, about 6:00 am last week. 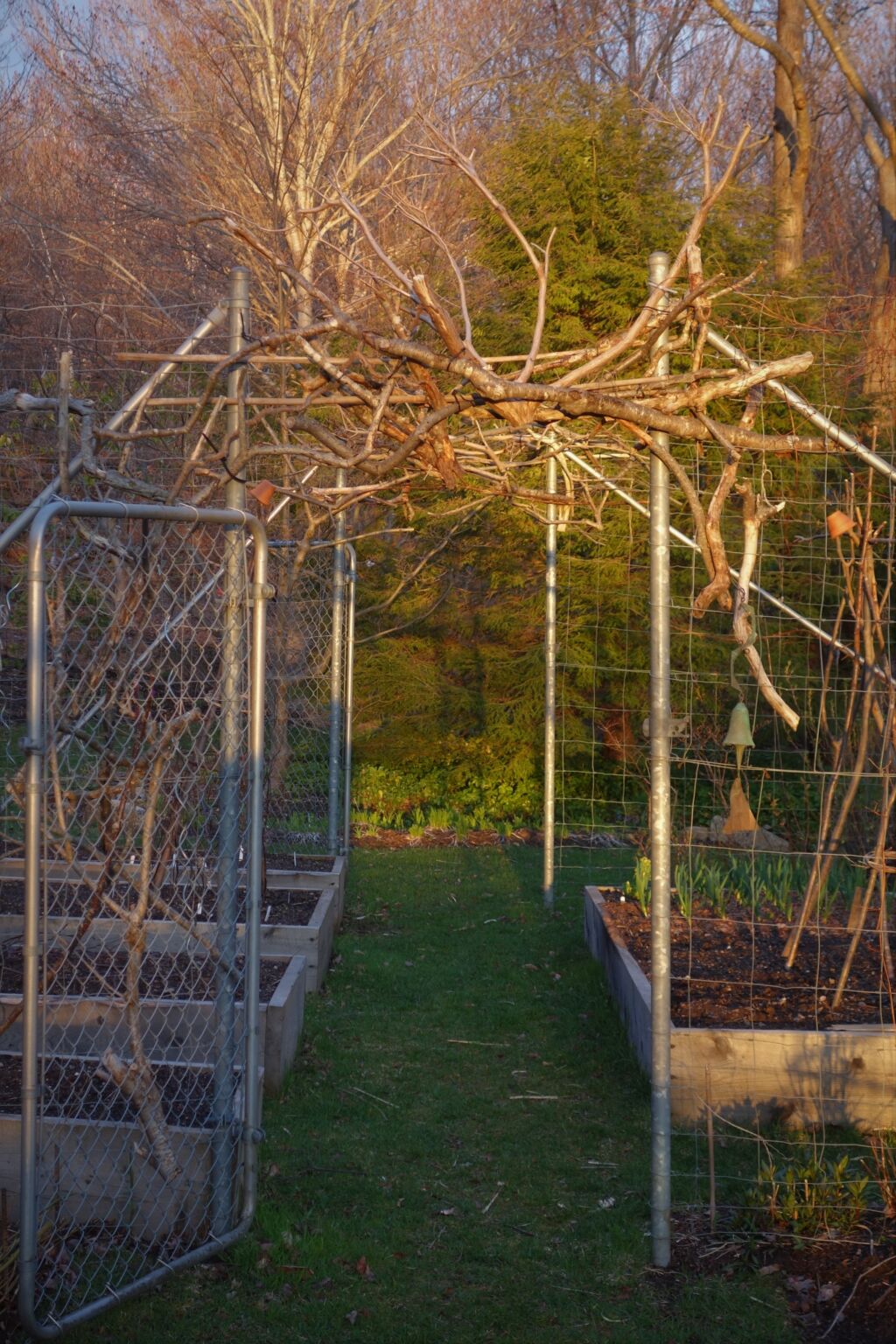 Then I noticed the afternoon sun converted the arches into squiggly shadows. 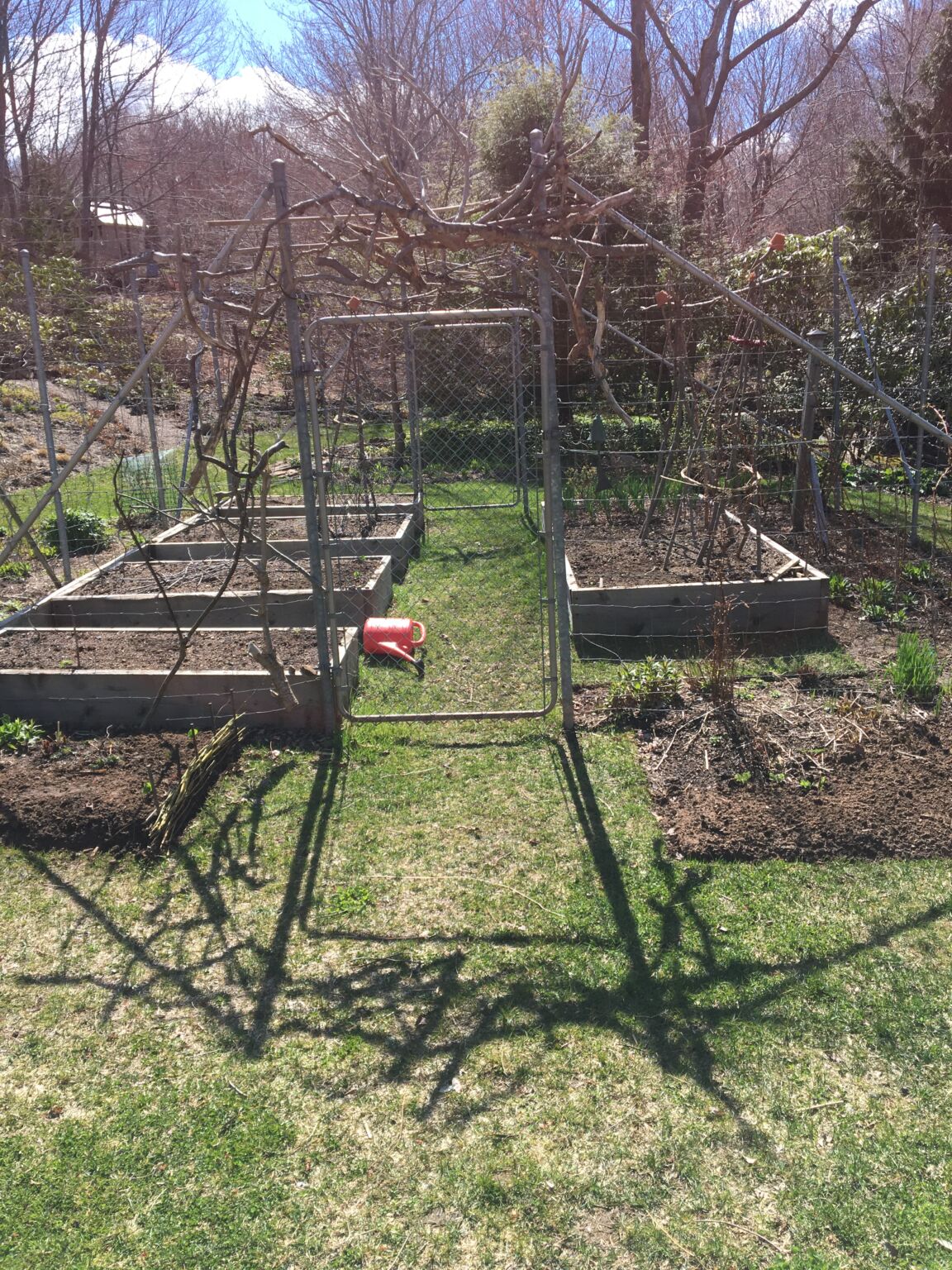 And it didn’t take long before I had inserted myself into the composition, as one does. Made me want to see images of Stonehenge that included shadows of people. 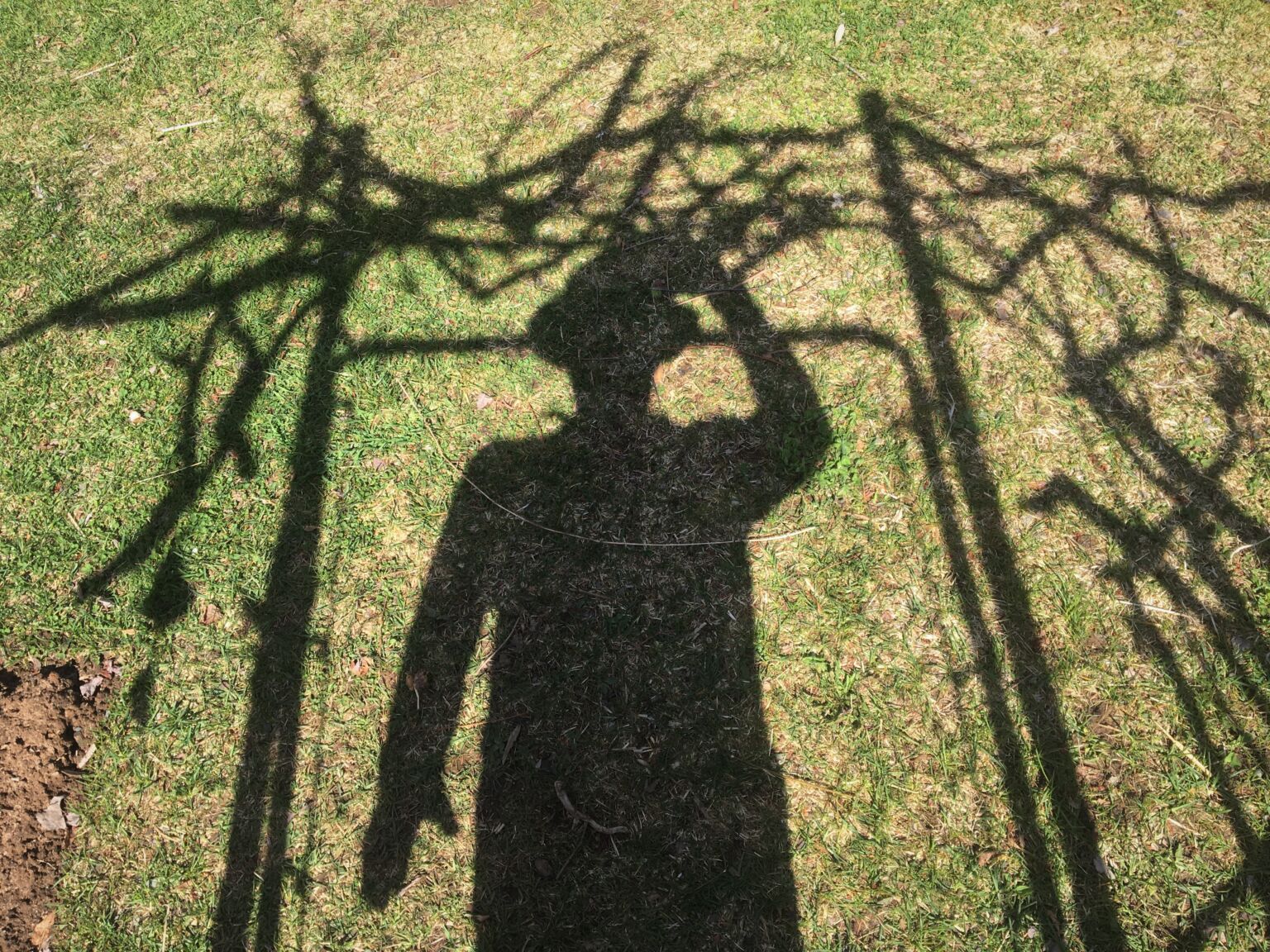 Deer continue their attacks, with smaller, but bolder groups of commandos. Squirrels are trying to move into the garage. We are still having discussions.

Most springs there are strong wind events at a moment that one of our early rhodos is in bloom. This year the winds arrived while the plant was still in bud, so the ground was strewn with these jewels. 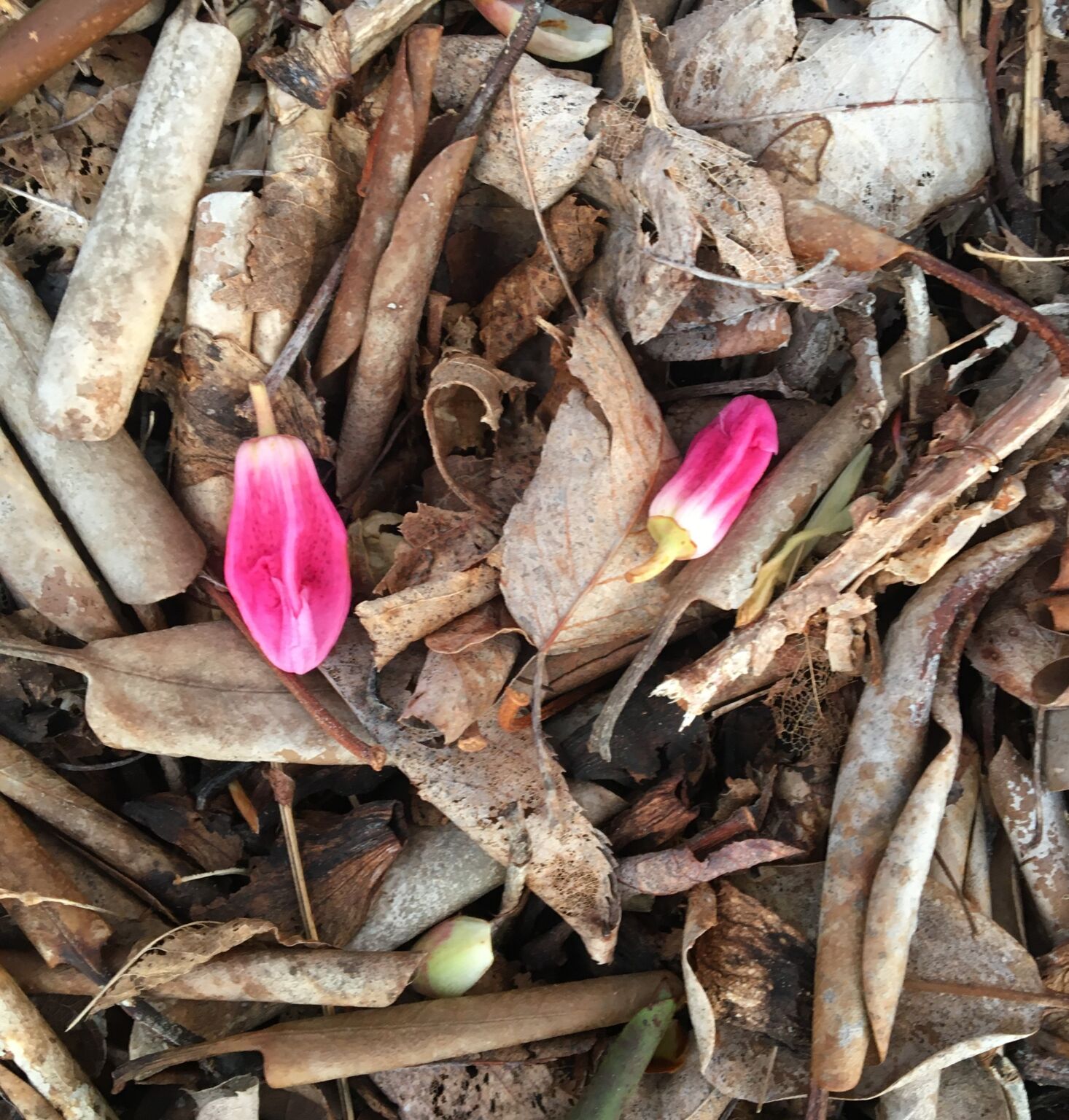 But most mornings I revel in an early walk in the garden, listening to the bird news from the likes of this song sparrow. 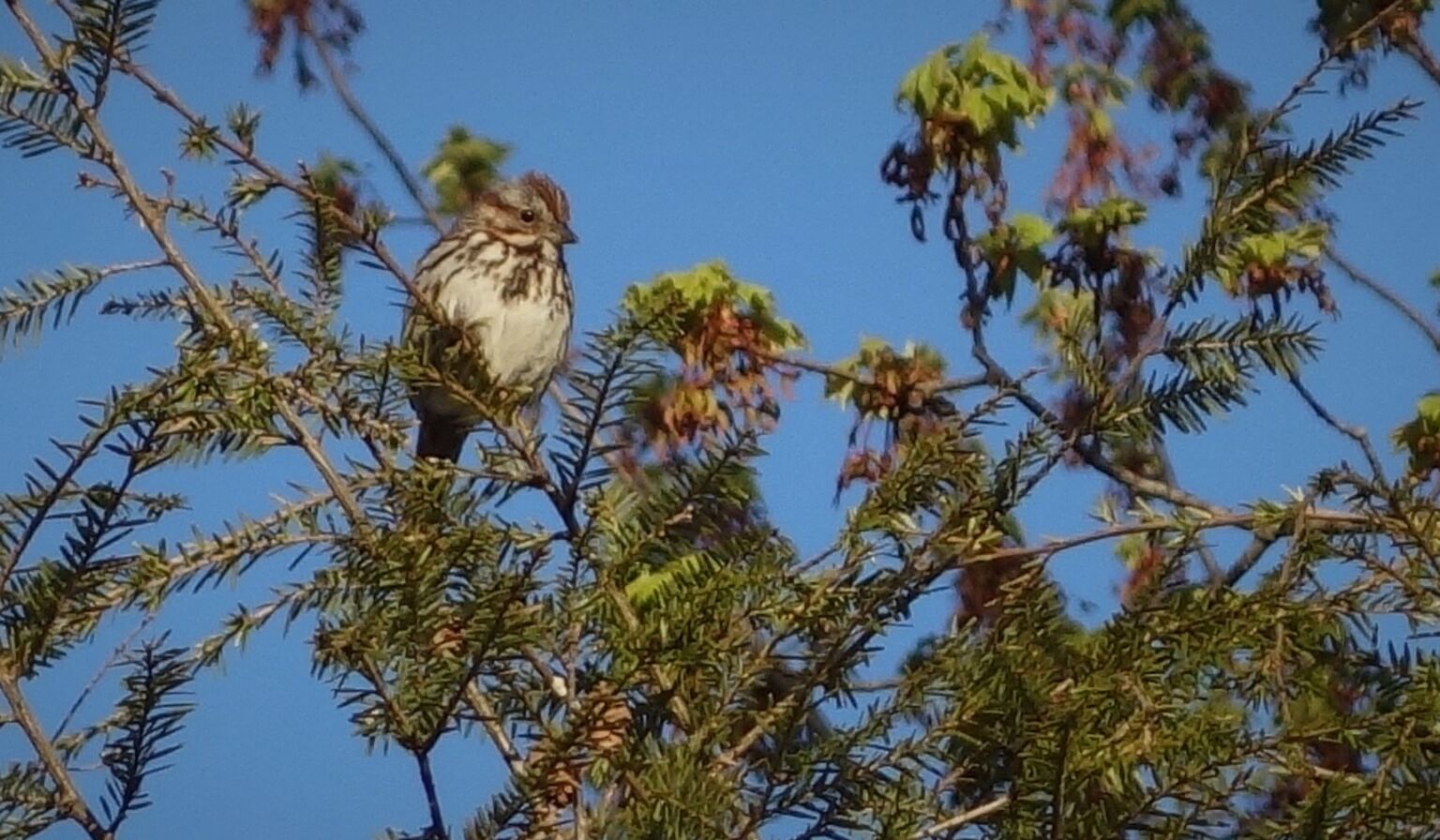