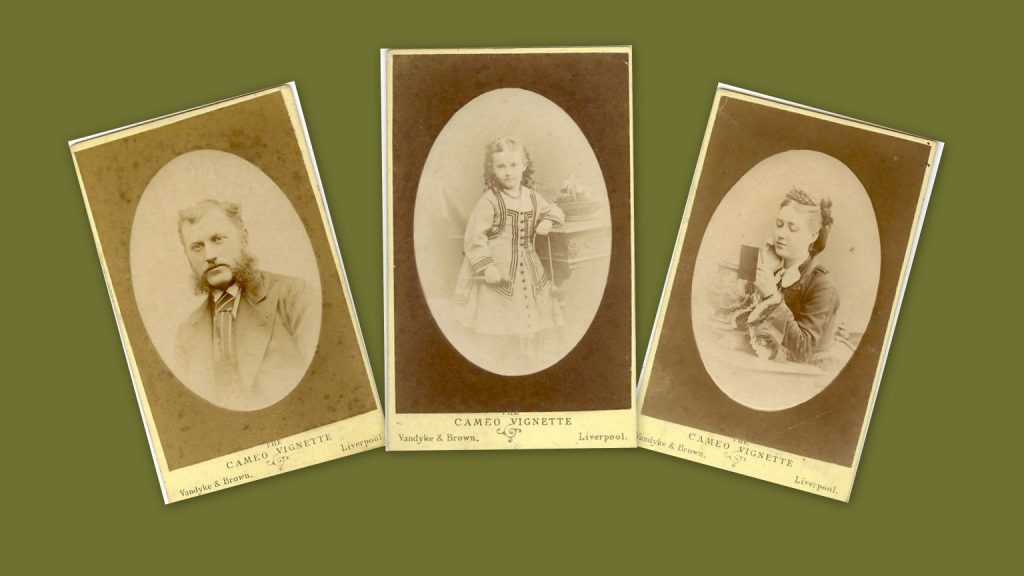 My grandmother experienced an infectious disease outbreak 150 years ago. Her little story used to sound antiquated, but now we all know how it feels to have an invisible threat suddenly arrive, and how it changes our lives.

Mary Davis Armstrong was encouraged by her son (uncle Maurice) to record stories from her interesting childhood. This memoir took the form of a series of letters, written in 1937,  to her first grandchild. Here is a photo of Mary at about that time, standing under apple blossoms beside her house in Bridgetown, Nova Scotia. She is about 70 years old. 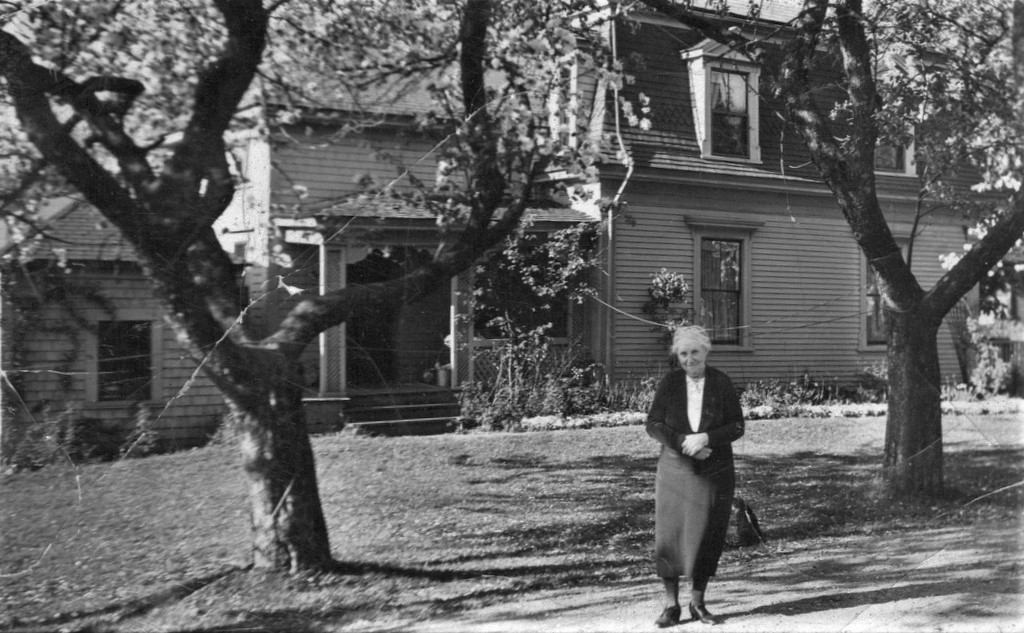 See the cat behind Mary. I think the beautiful photo was taken by Bridgetown’s professional photographer, Georgie Cunningham.

And this is what Mary looked like, about 1875, when this story unfolds. She was about eight years old. 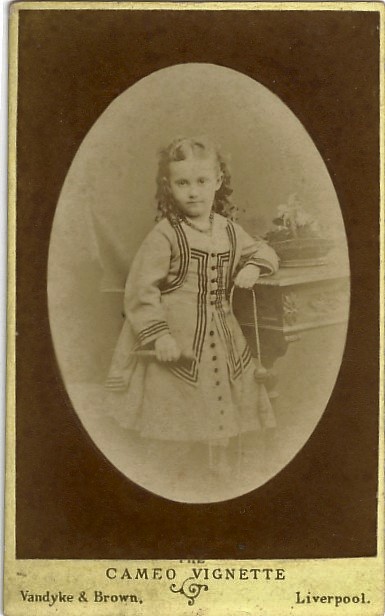 Mary’s father, Samuel Bancroft Davis, was the captain of a Yarmouth sailing ship that carried cargo from the southern United States to Liverpool, England. As was the practice, Mary and her mother Alice accompanied Sam on these voyages.

Our story begins after their vessel, the barque Herbert C. Hall, has taken on a cargo of cotton in Charleston, SC. 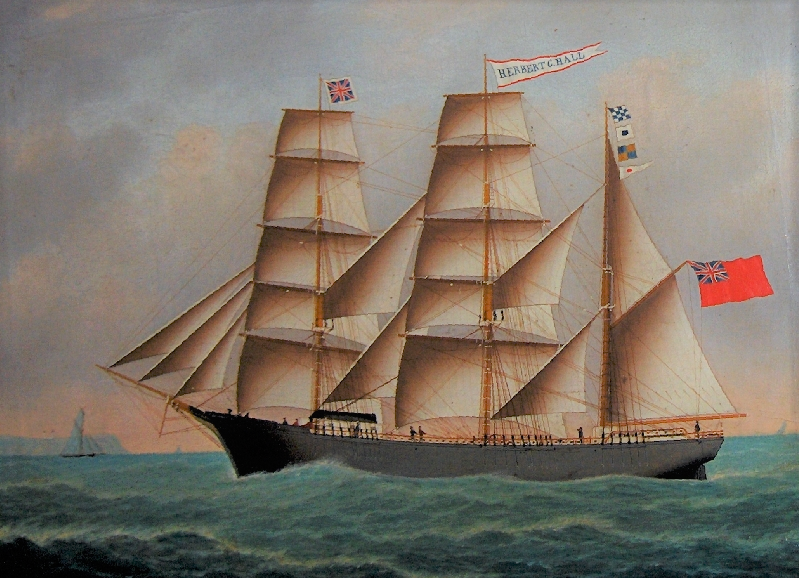 “….and about ten days out, father came down one morning to say the cook was sick and he felt quite sure he had smallpox. So, we would have to eat what we could cook on a little, one-hole stove. The carpenter, whose room was next to the cook’s, had been through smallpox and would wait on him. There were others who had it before, but several who hadn’t. We had gales of wind with not enough well men to take in sails, and the mates and father had to tend the wheel most of the time.

Mother did the best she could for father, the two mates, and us. The storeroom was off the forward cabin so there was plenty of food, but no way to bake anything. We got so hungry for bread that at last she made biscuits baked in two fry pans on top of the stove. She turned them up-side-down to do their tops, and bottom-side-down to do their bottoms. My they were good!

I wasn’t allowed on deck, only to the pilot house window. I stood on a stair, my elbows hooked over the window sill. Father outside made me get down and close the window if anyone came out of the other house.

Thus we blew on- at last the cook died, was sewed in a sail with rocks, put on the rail and father read a service over him as he went into the deep.

Soon after this we reached the Isle of Wight on the south of England. A doctor came on board and five men were taken to a hospital. All the rest on board had to be vaccinated – me among them, but I had been well done by aunt Hannah, so this one didn’t take. Then he fumigated the forward house or forecastle and galley and allowed us to go on our way.”

Doesn’t that sound familiar? I was fascinated that the approach we use today was so well understood: isolation to reduce infection, the value of those who have developed immunity, the importance of vaccination. Even being “hungry for bread!’

The family quarters on these vessels were comfortable, if compact. Photos from other ships show what look like small Victorian sitting rooms, except everything is fastened down or designed to swing. The family’s food was normally prepared by the cook, Alice would have been cooking on a decorative-looking, parlour stove. I don’t know how well she could cook, she had married at 17 and been living at sea since. Here is a photo of her at that time. Family lore is that she fancied her looks. 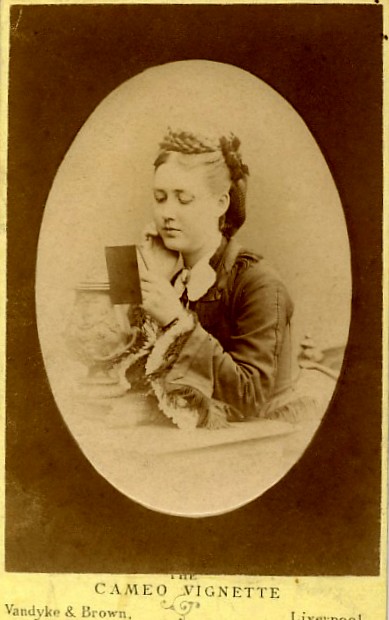 And here is captain Sam, who had just gone through what sounds like a case study in crisis management. 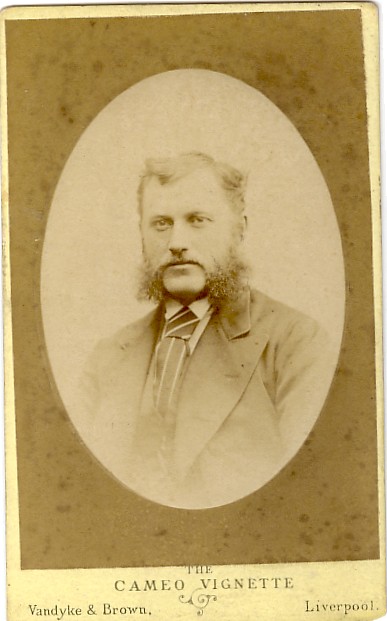 When Herbert C. Hall eventually arrived at Liverpool to unload, Mary and her mother left the vessel to stay at one of the lodging houses that catered to captains’ families. Port stays were often an opportunity to visit with friends and relatives from home, who shared this seafaring lifestyle.

But having dodged the smallpox virus at sea, Mary caught a bacterial infection on land. She writes:

“But the sad thing was, after a few days I came on with scarlet fever, a little girl at Mrs. Lovett’s lodging house had just had it before we came and passed it along to me. However, I wasn’t very sick and was glad I had it when it was little trouble to anyone. The little girl could play with me while I had to stay in.”