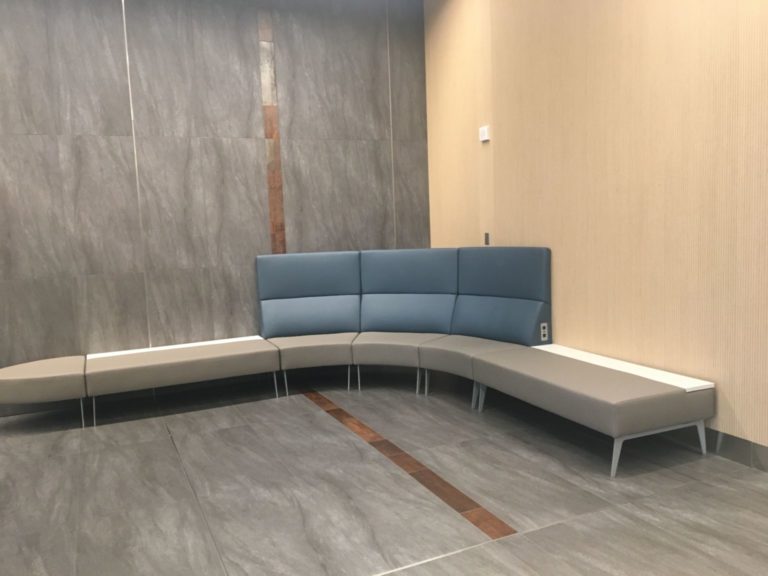 On Sunday the Halifax Convention Centre hosted an open house, so Sheila and I went down to take our first look inside the big blue shard. Have you been? It’s a mammoth space and very clean. At every turn we were met and engaged by helpful staff who made us feel most welcome. 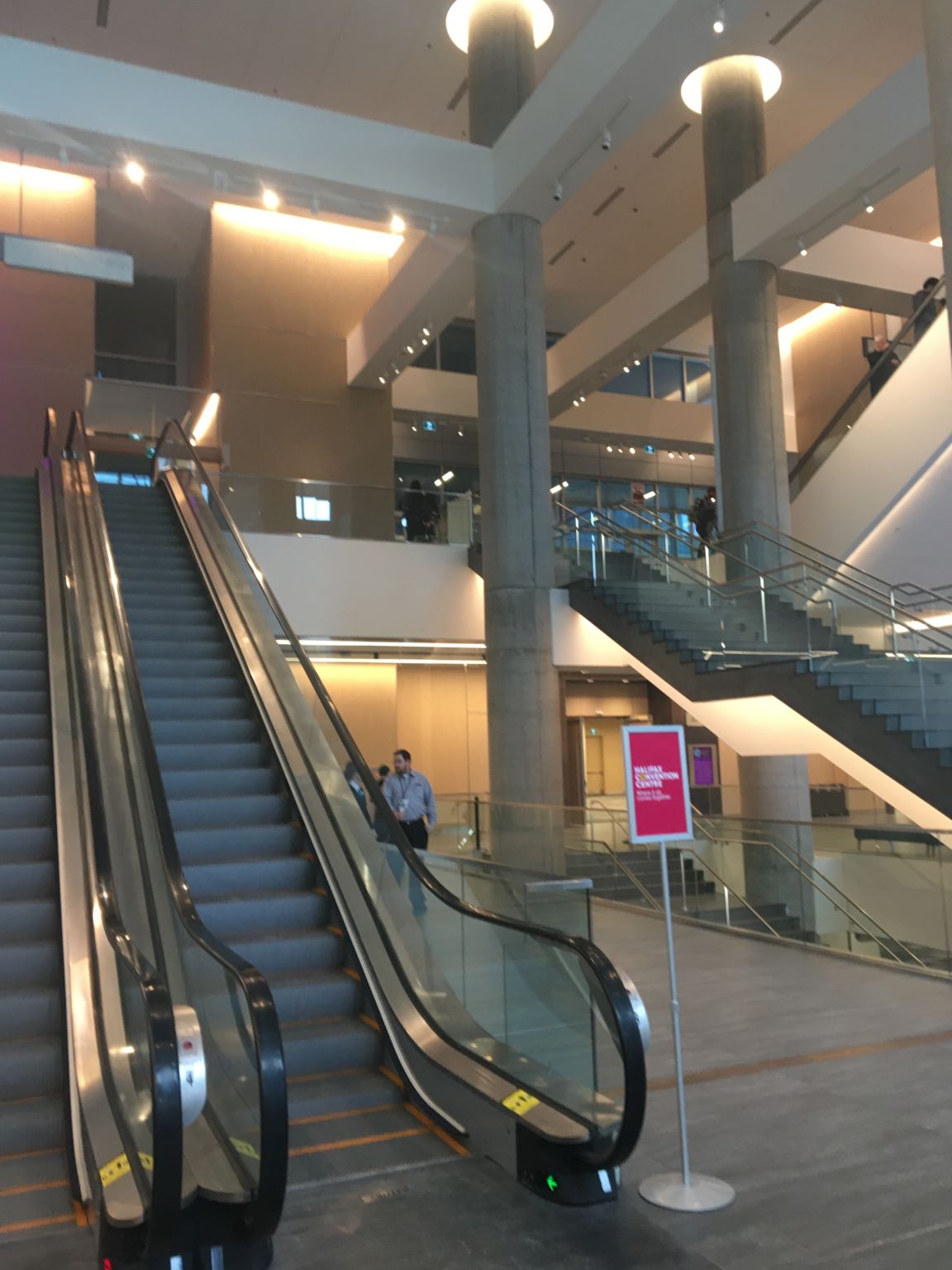 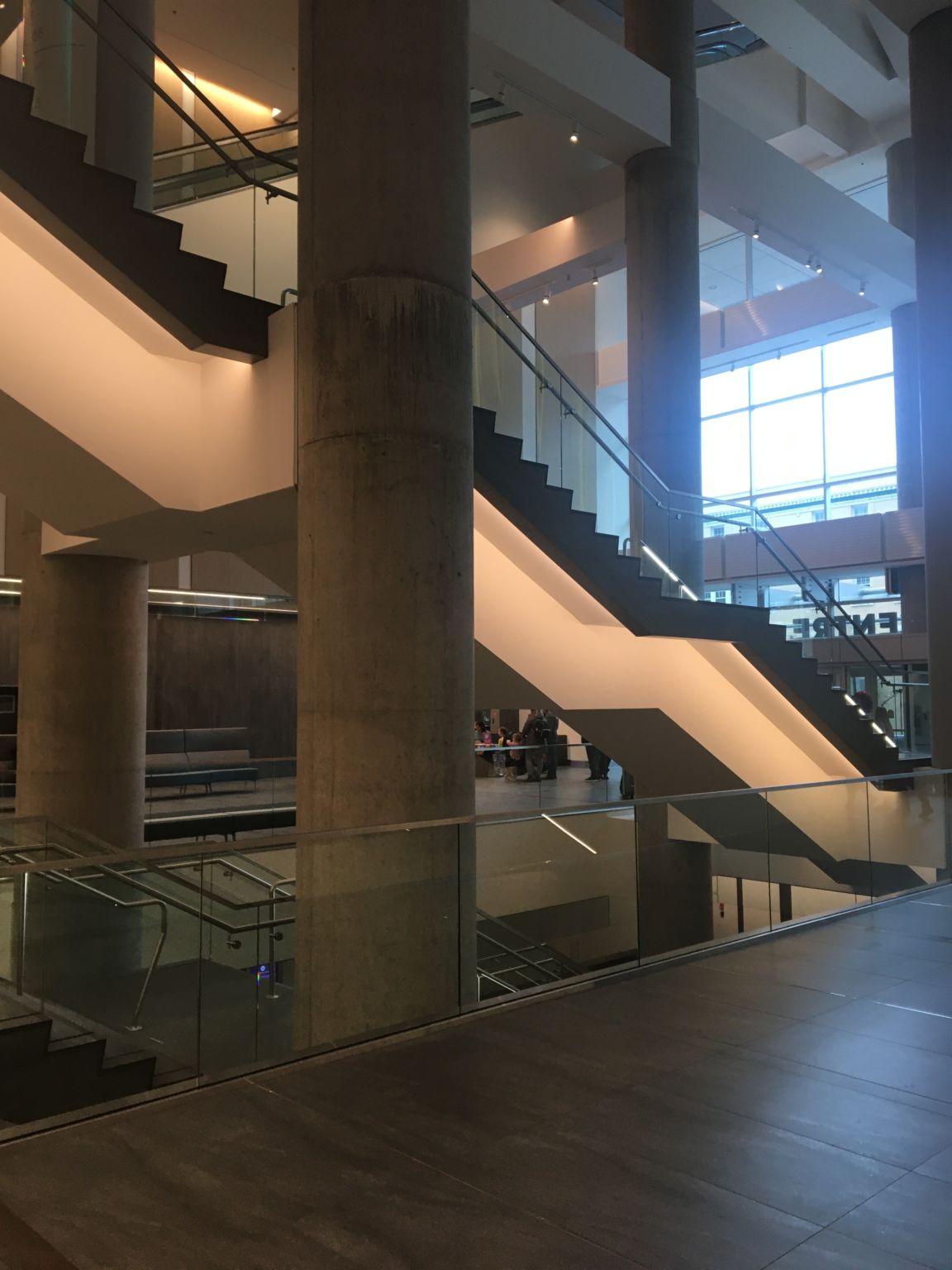 I do not have experience with big convention centres, nor do I understand what users expect. If ours is a good example, convention planners are looking for neutral. So neutral that the facility might be anywhere.

Decorative elements we observed were limited to programmable lighting. We were told this colour combination is called “rainbow.” 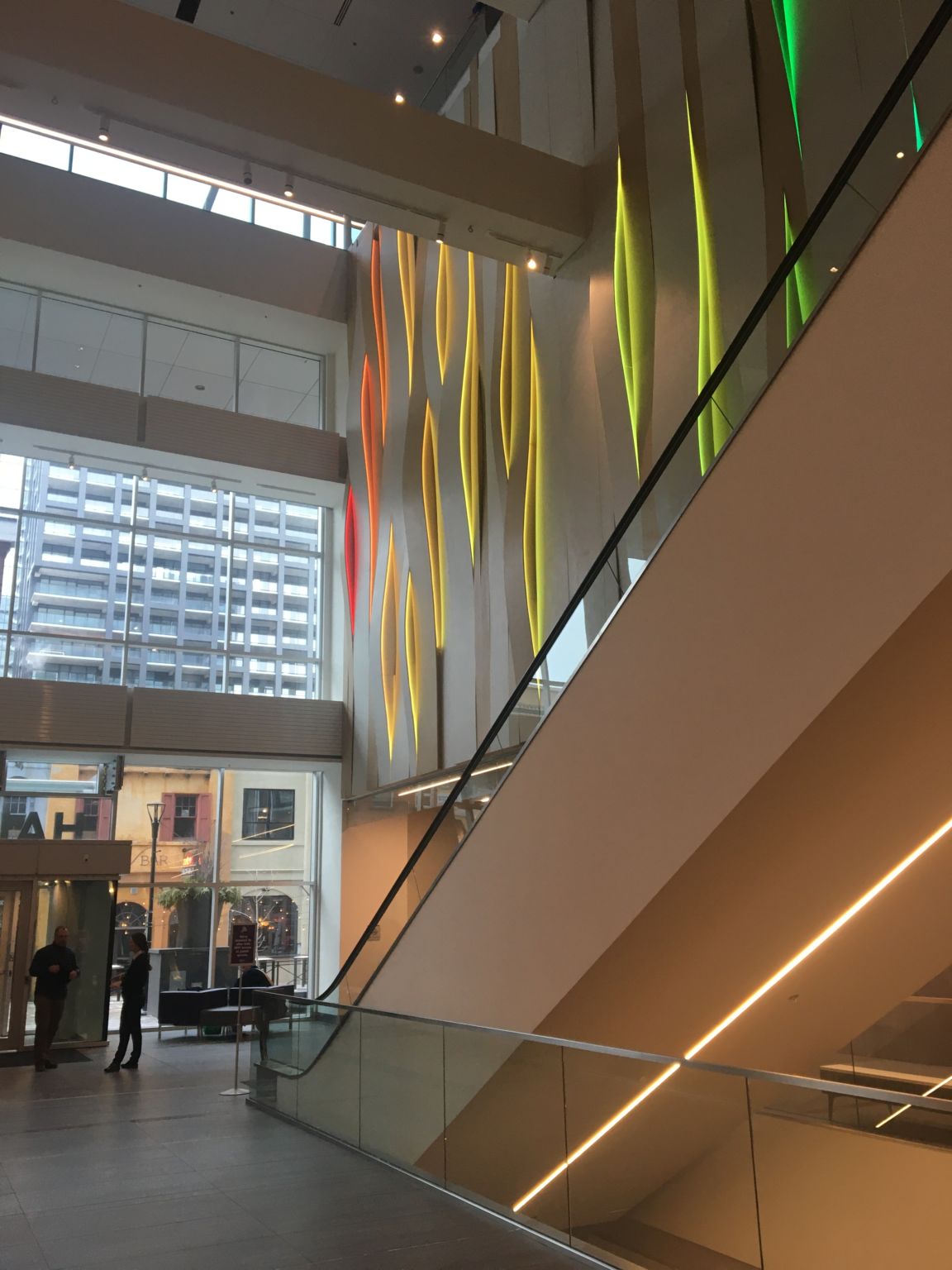 The big hall is really BIG. 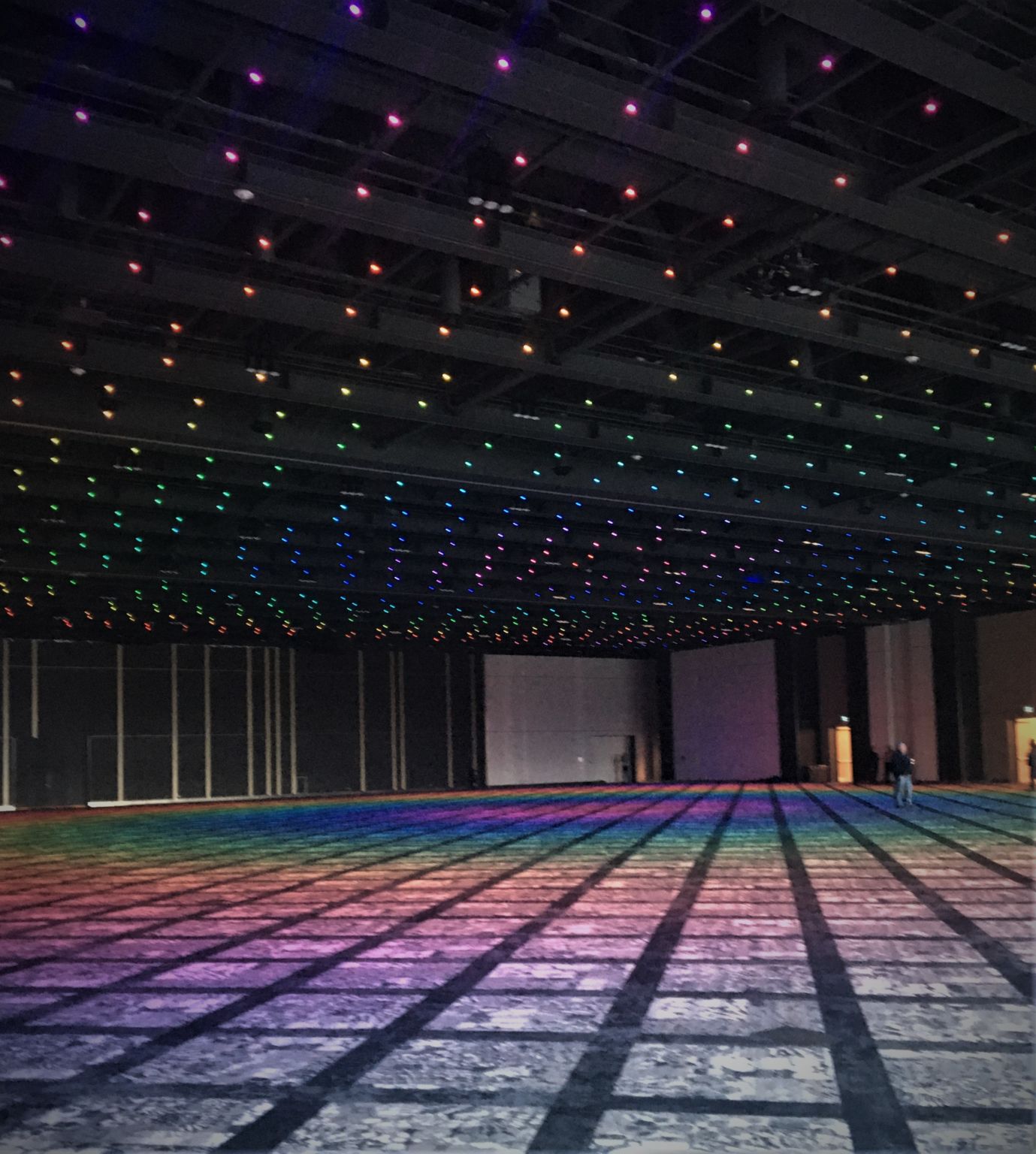 I like institutional carpet designs, and this would be a fun example to explore when the conference program begins to lag. 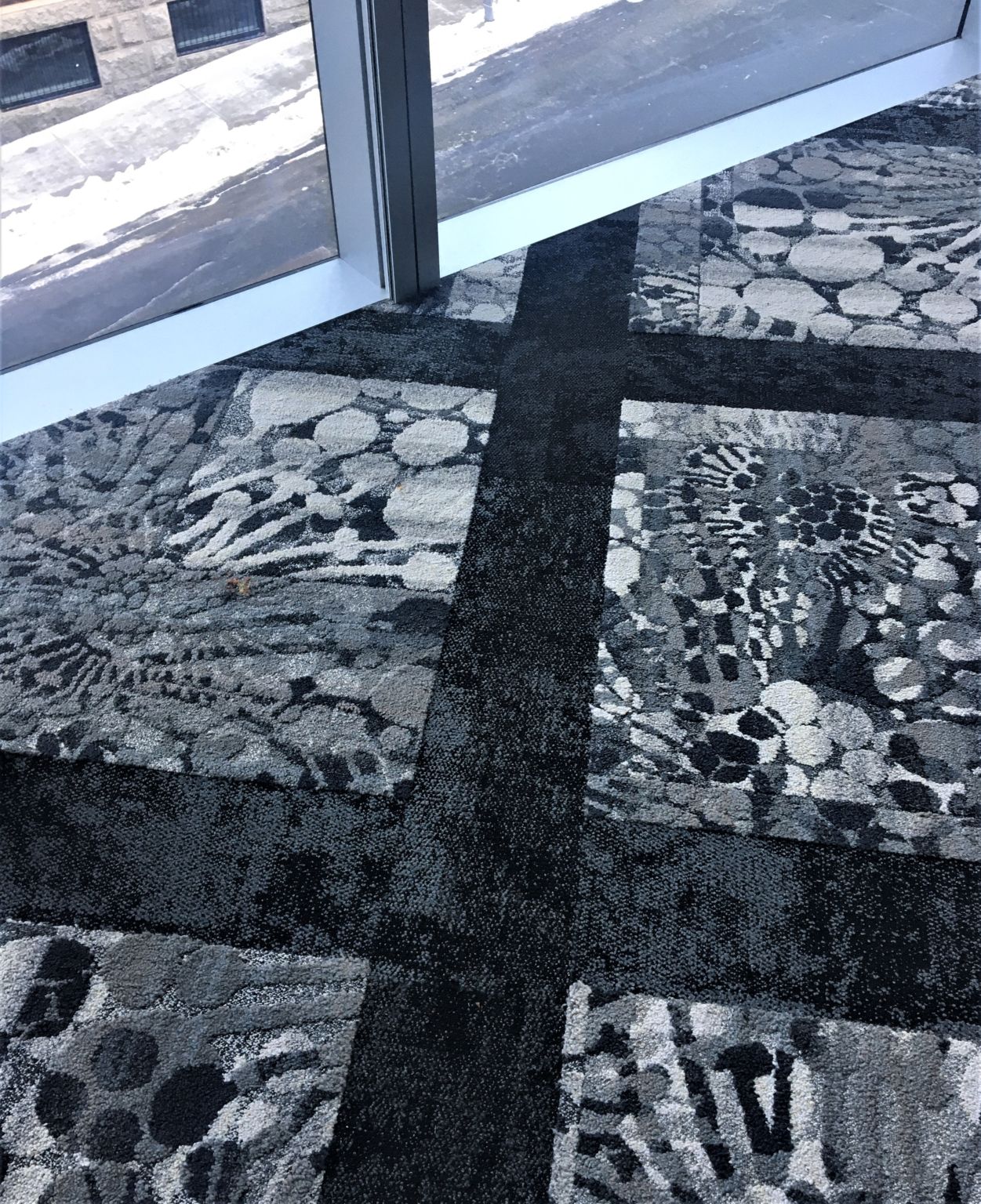 At a real conference you would be networking and touching base, but on Sunday morning we were drawn to looking out the wall of windows. If I had come all the way from Cincinnati or Moncton, I’d probably like to understand a little bit about where I was. But we saw no interpretation. Let me help.

Looking down Argyle Street, some guests might be interested in the award-winning streetscape and to learn the argyle sock design story. Nova Scotia’s drama credentials are represented by Neptune Theatre, across the street, named after the first European entertainment written and performed in North America. Opening night was November 14, 1606, down in Port Royal. 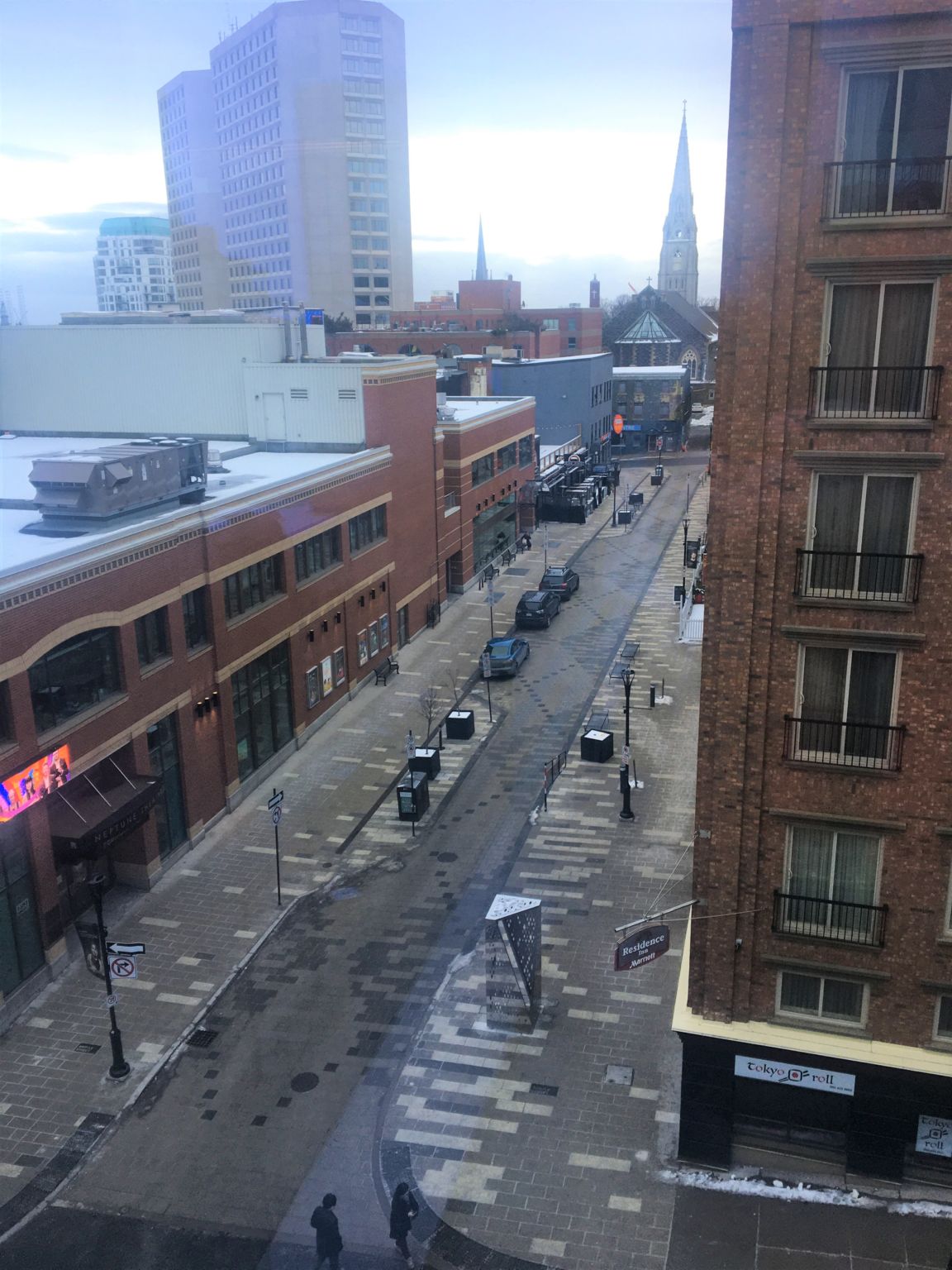 Urban nerds might like to know that the Maritime Centre is off grid because of the Citadel viewplanes. Be careful what you wish for.

What would interest me as a visitor is seeing the same view in 1841. An earlier iteration of St. Mary’s provides continuity in the views. 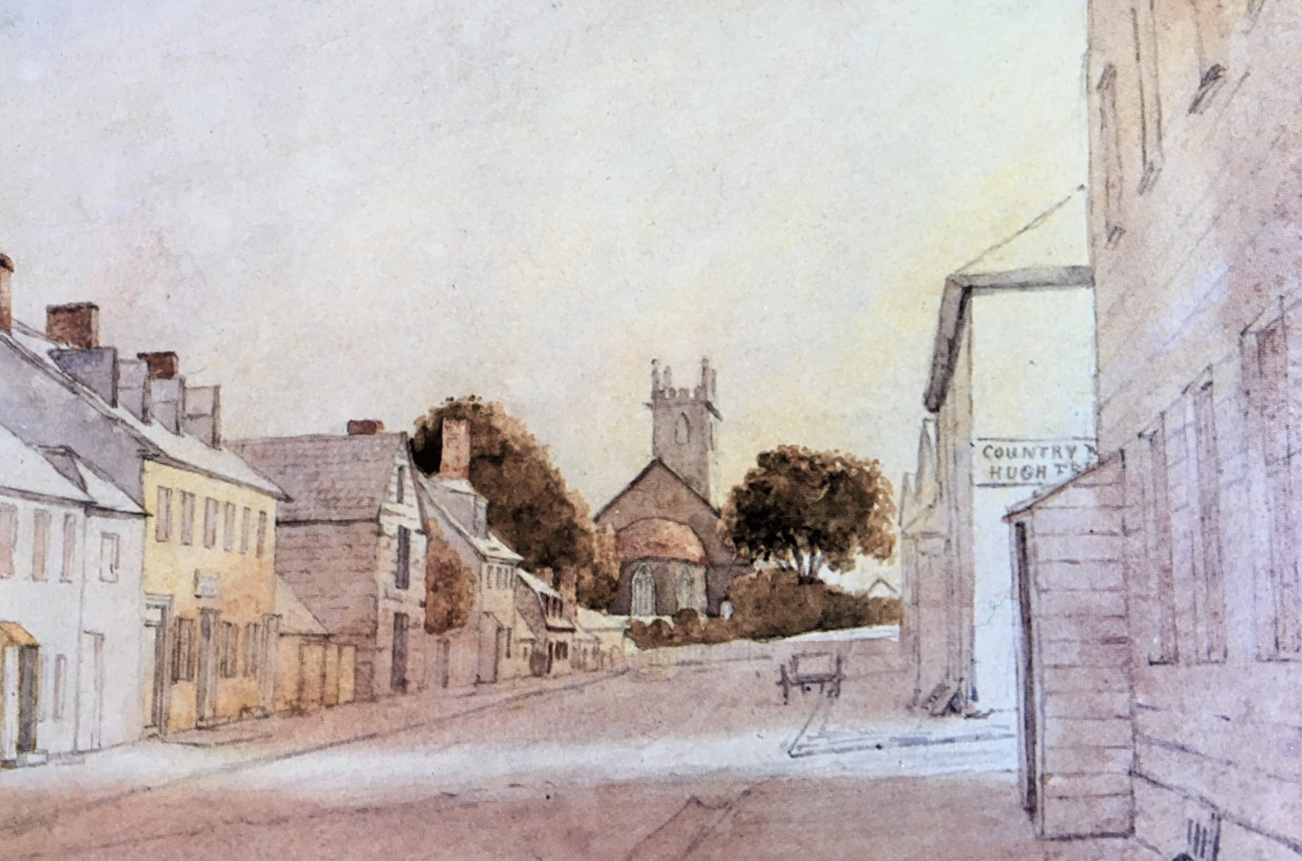 Stroll to the other end of the concourse and you are overlooking St. Paul’s and the Grand Parade. Many convention goers, from elsewhere in the continent, will come from communities that are much younger than Halifax. They might enjoy learning that the street grid in the old town was laid out in 1749, and didn’t really change until we started erecting buildings that cover several blocks. 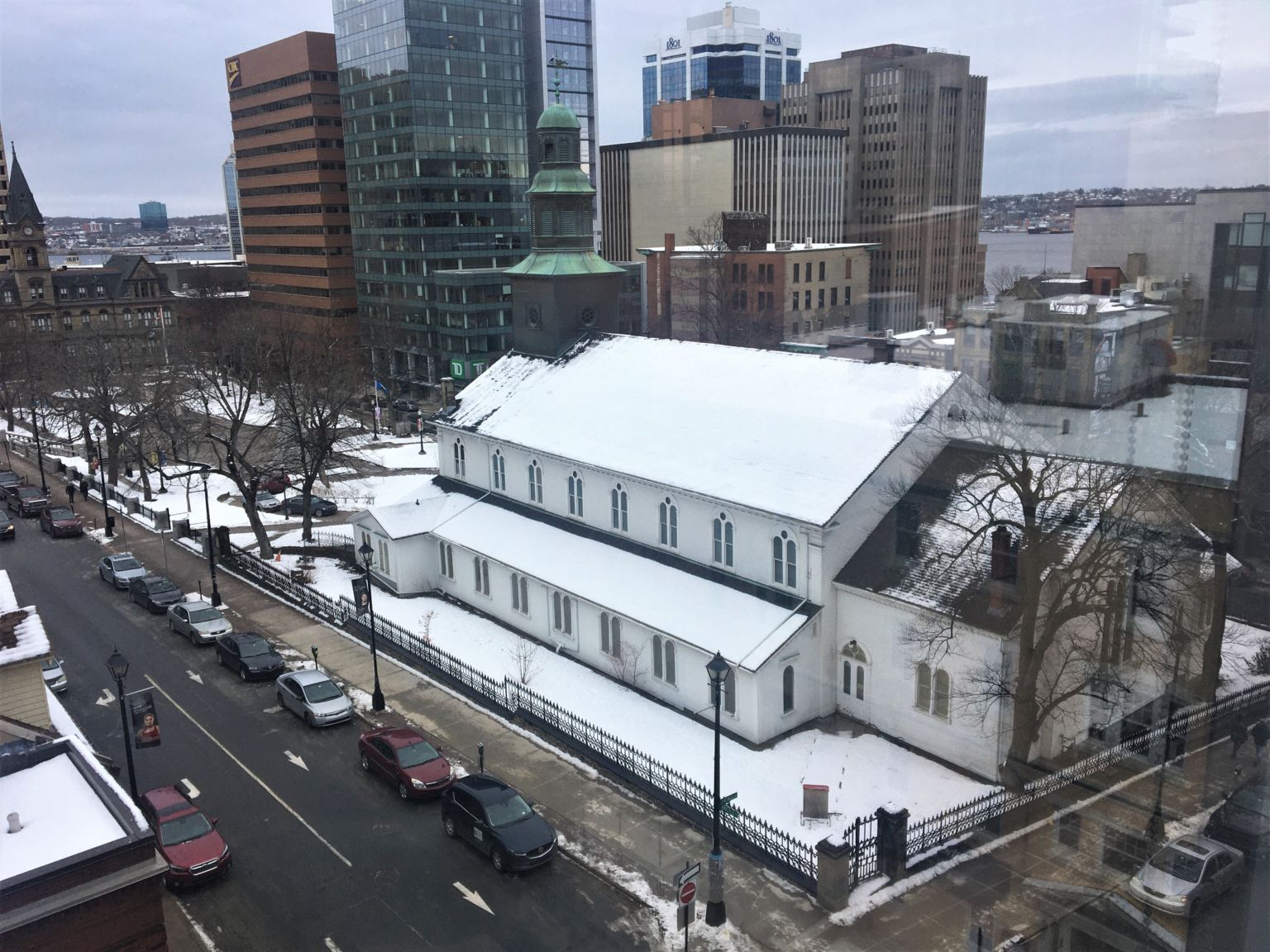 As the oldest building in Halifax, St. Paul’s has been altered a lot over the centuries, but it is still recognizable in this 1759 view. 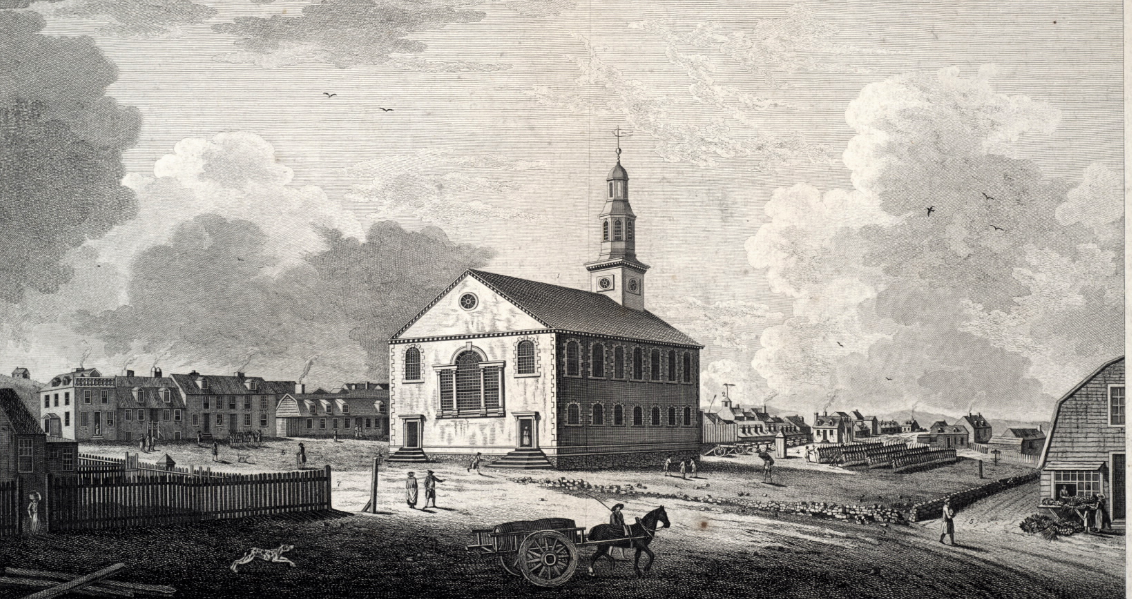 The Nova Centre has doomed the Carleton, across the street, to wind and shade, but from the comfort of inside, a convention attendee might be delighted to learn what was hidden under that cream facade. 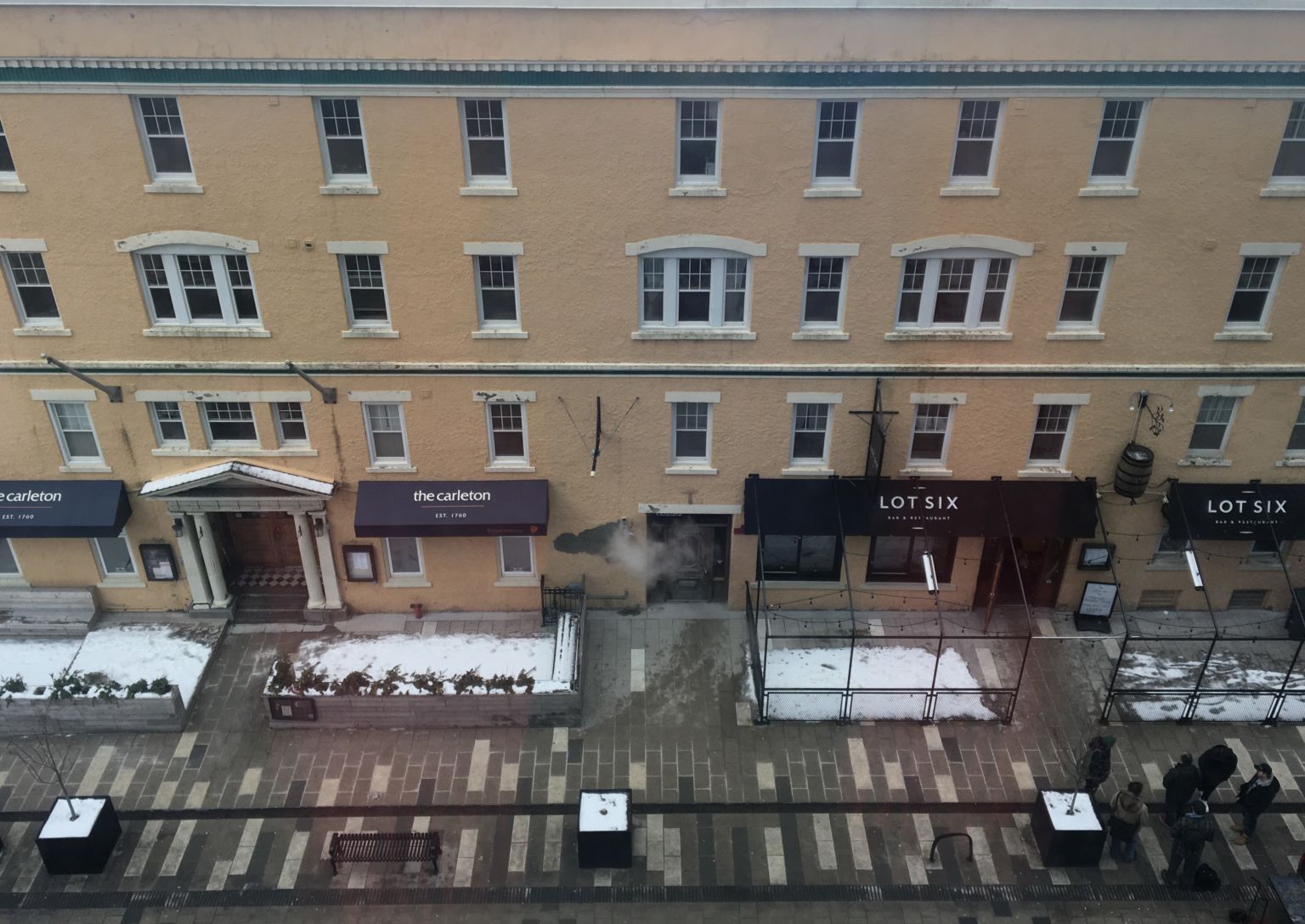 Concealed are remnants of the oldest house in Halifax, built in 1760. This is what it looked like in the late 19th century when it was a hotel, with lads soaking up the afternoon sun. Also seven trees. 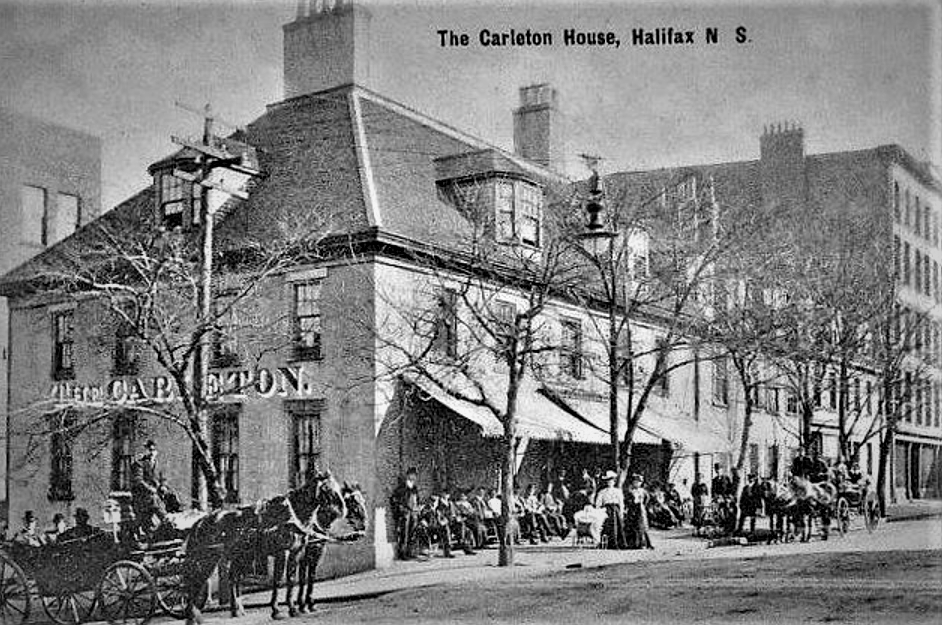 For years, pictures of the Economy Shoe Shop and neighbours appeared in Halifax tourist literature as shorthand for good times in olde tyme surroundings. 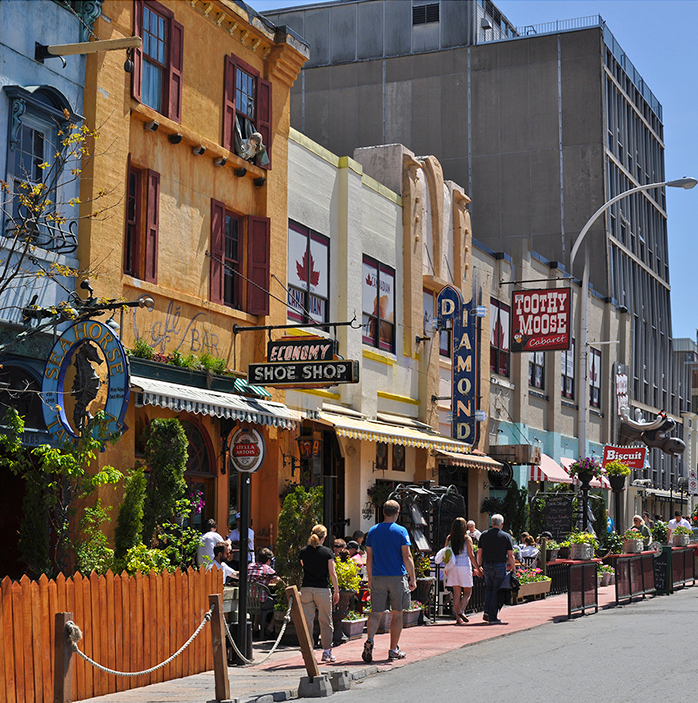 The owner of the key businesses was Victor Syperek, and before he got into the beer slinging business he was a theatre set designer. He used those talents to create a dramatic setting, and some of his artifice is very visible from the Convention Centre (like those fake top floor windows on the left). 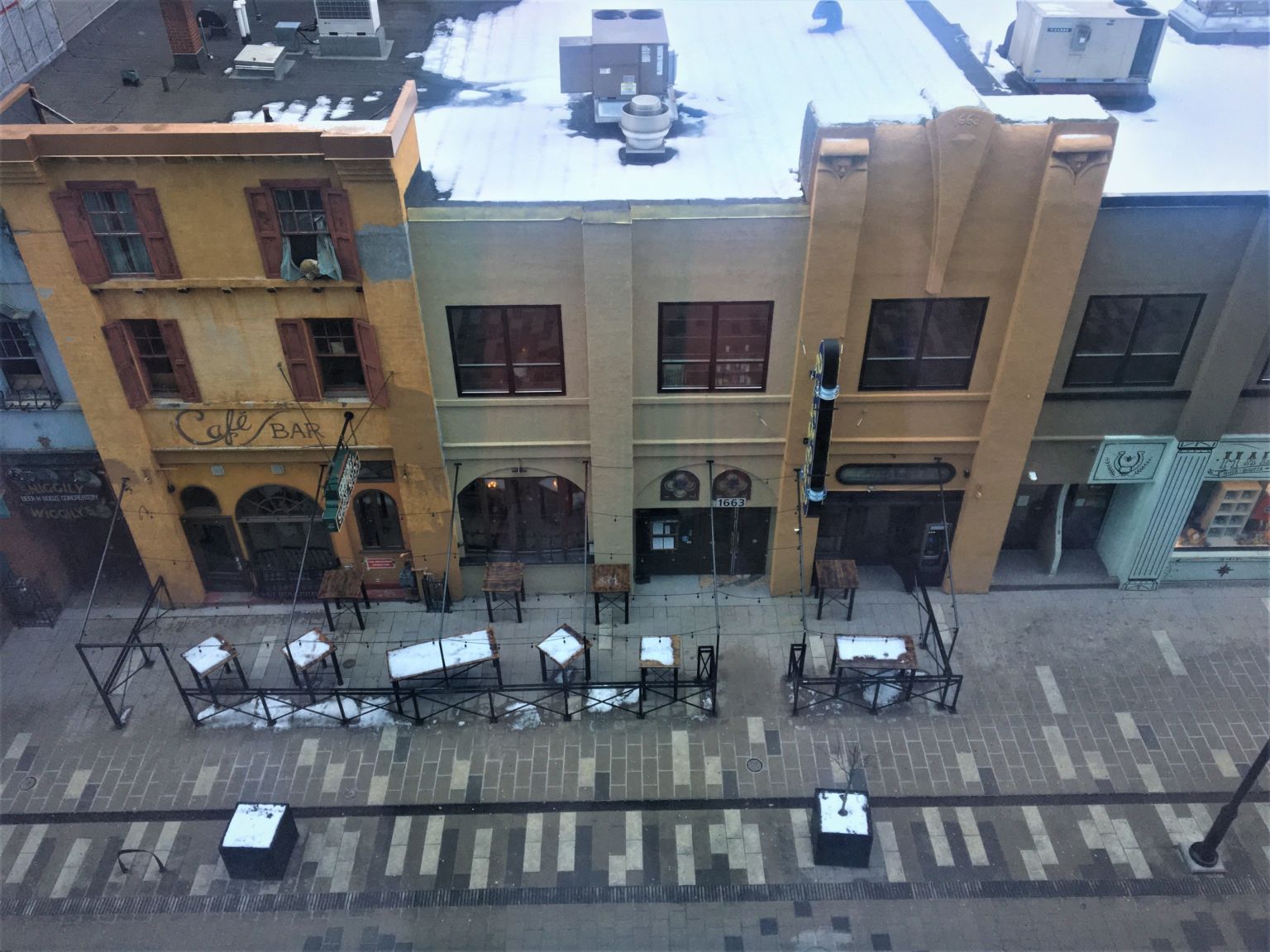 I guess the public spaces in the Convention Centre are empty stages, waiting for event planners to make their magic. But it feels like the space could use a little more everyday magic, like the joyful energy Victor created across the street.

For the last couple of years artist Jordan Bennett’s work has been turning up all over the place (close to home you may have seen his exhibition at the Art Gallery of Nova Scotia or his permanent installation at the Zatzman Sportsplex). He uses traditional Mi’kmaq iconography in huge and colourful installations. See how his work brightens up and energizes the National Gallery in Ottawa. 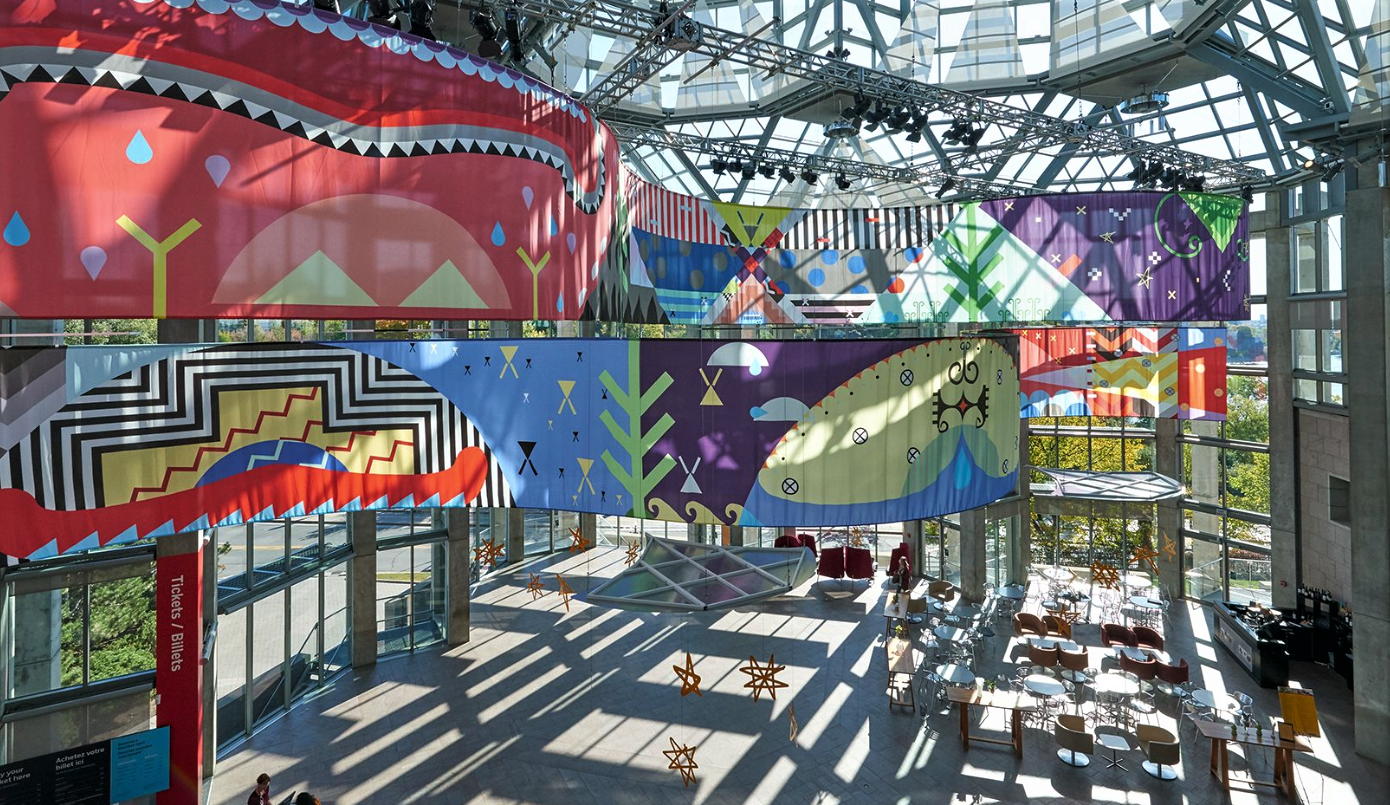 Imagine something with a similar impact over those shiny escalators in the Convention Centre. In a creative town like Halifax, we have lots of folks who could make the place special; to surprise and enchant. Let’s have some fun. 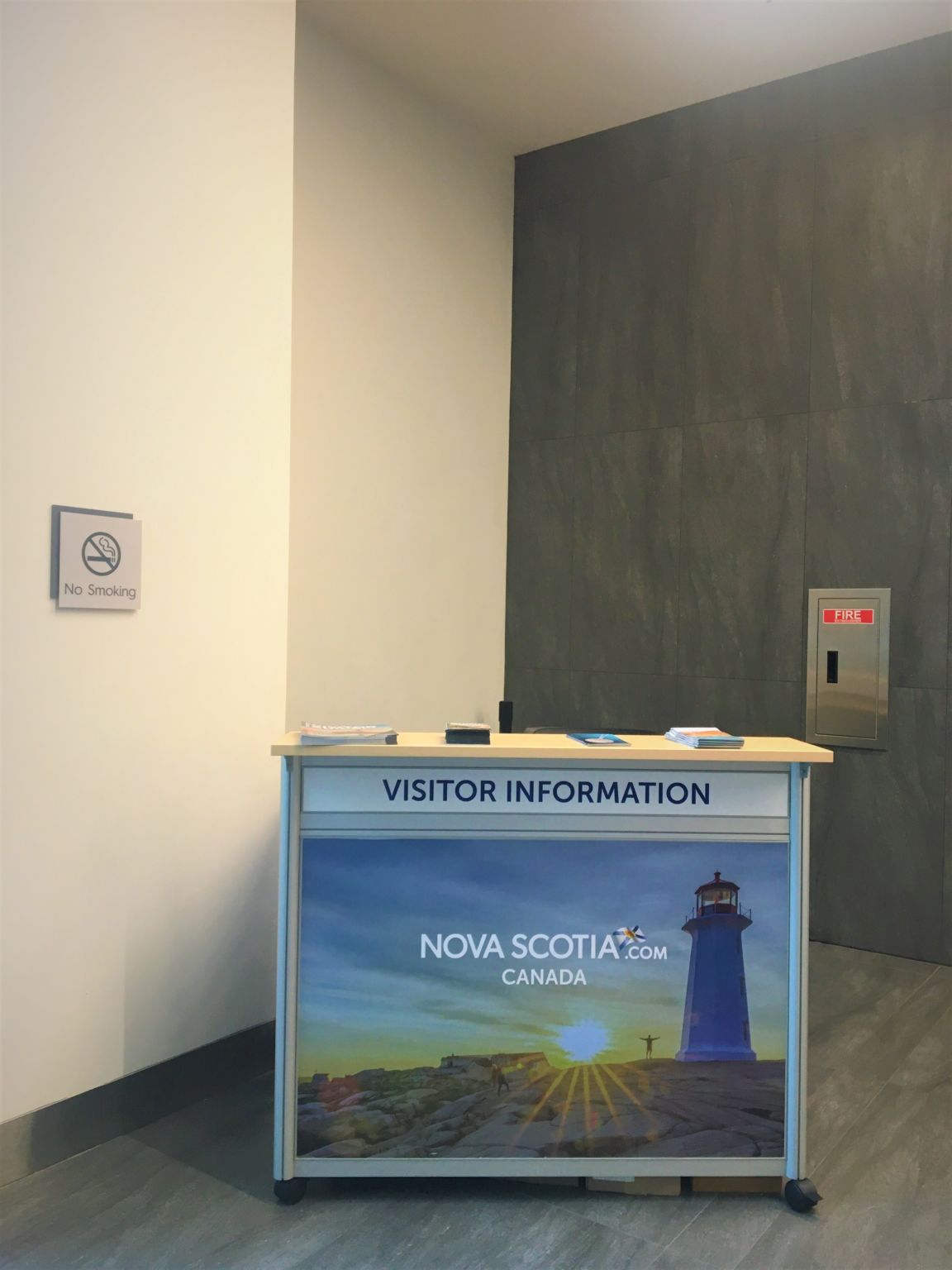 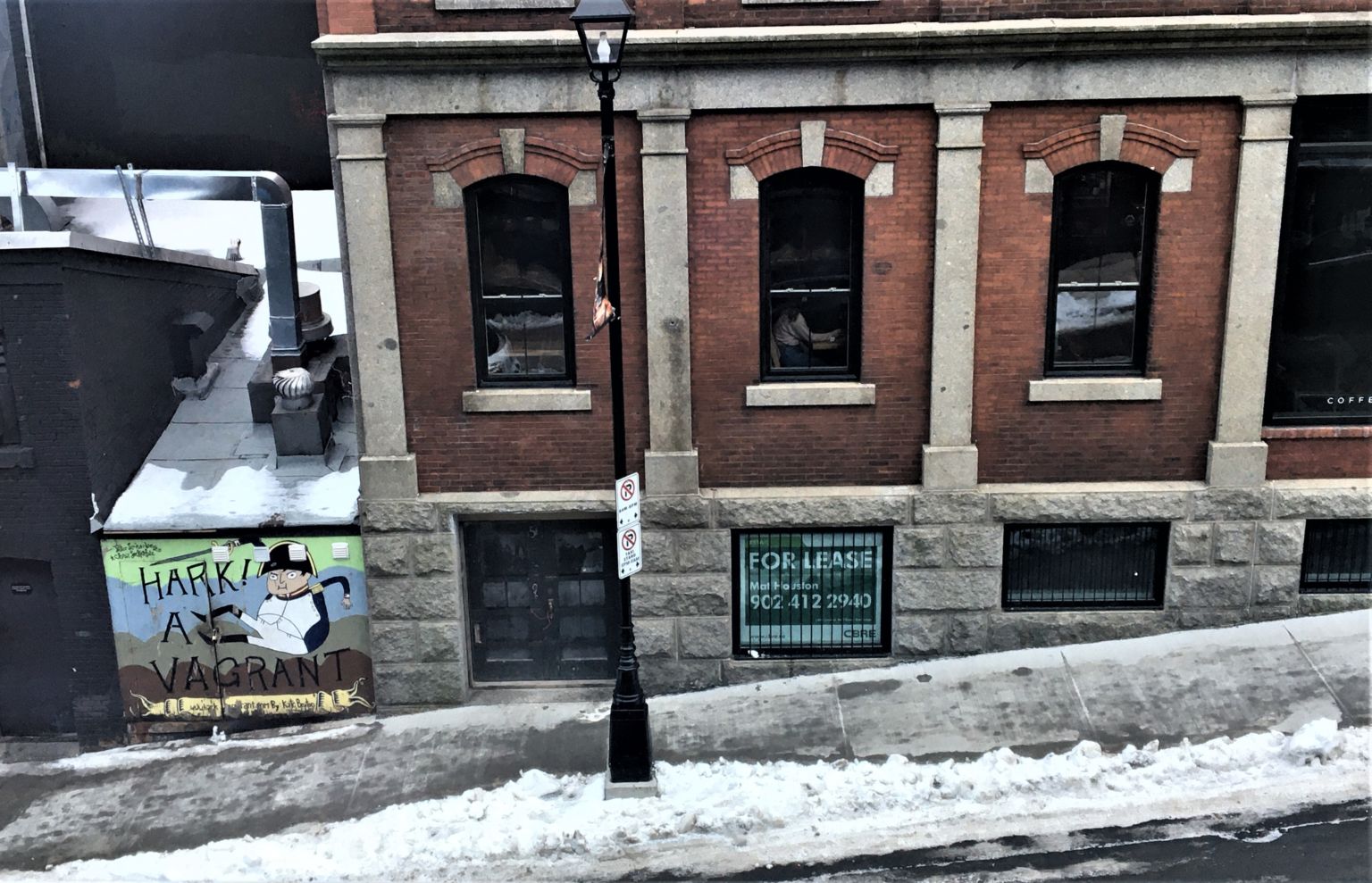 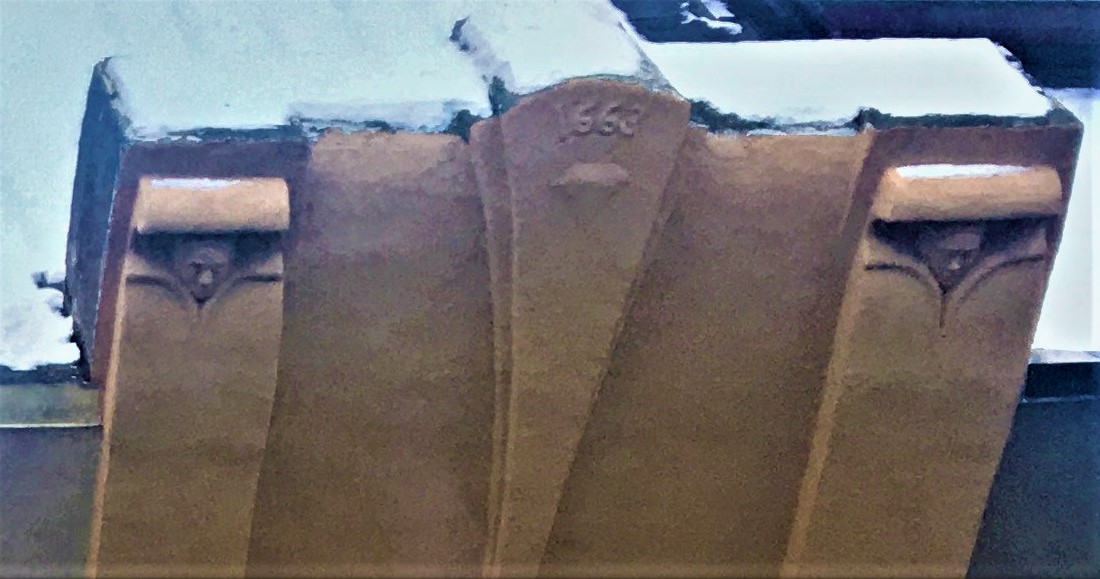