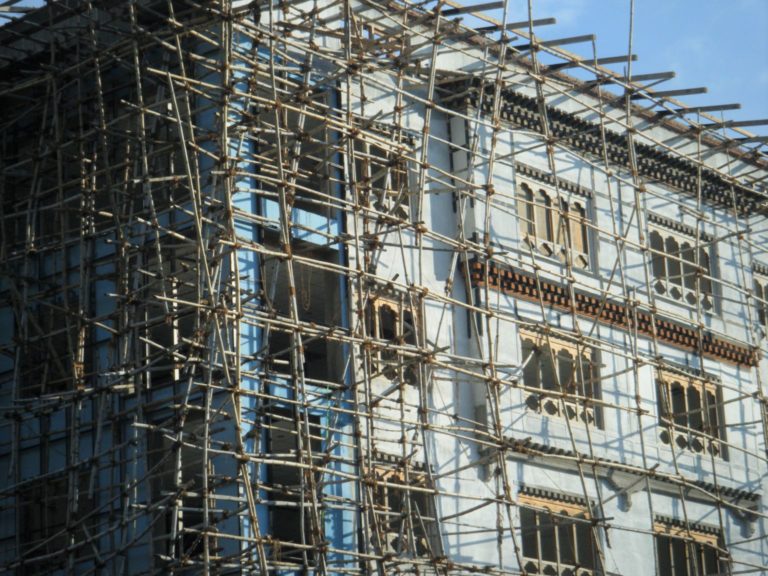 I was excited to notice that Nocturne, the annual arts festival in the streets of Halifax/Dartmouth, selected scaffolding as their muse this year. The curator, Tori Fleming says:

Often, the structures designed to temporarily hold up the active assembly and disassembly of our infrastructure create a new version of our city – adding detours to our commutes, turning walking routes into a series of scaffolding tunnels, and speckling our skyline with cranes. This year’s Nocturne will embrace this time of change to reimagine the city with new materials, new ideals, and a sense of humour.

I also notice good scaffold, so this sent me on a quick search of my photos, that yielded a couple of scaffold images.

In the fall of 2017 we  visited an actual exhibit on scaffolding, at the Centre for Architecture in New York. It provided this helpful statistic: “there are an estimated 280 miles of scaffolding occupying New York City at any given time; it is something pedestrians encounter every day.” Sounds familiar. 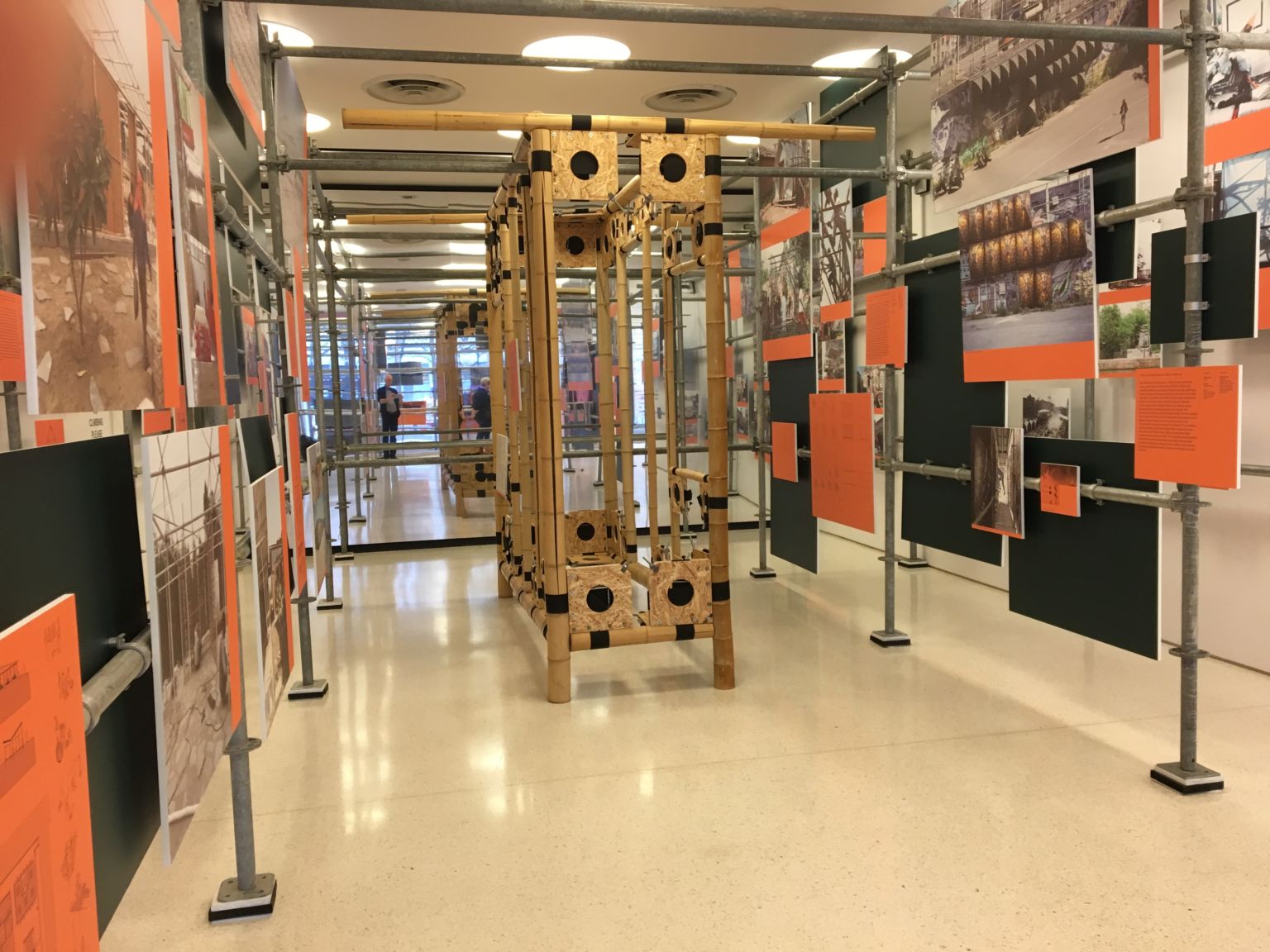 The exhibition showed examples of scaffolds from around the world, which reminded me of these bamboo examples we saw in Bhutan a number of years ago. 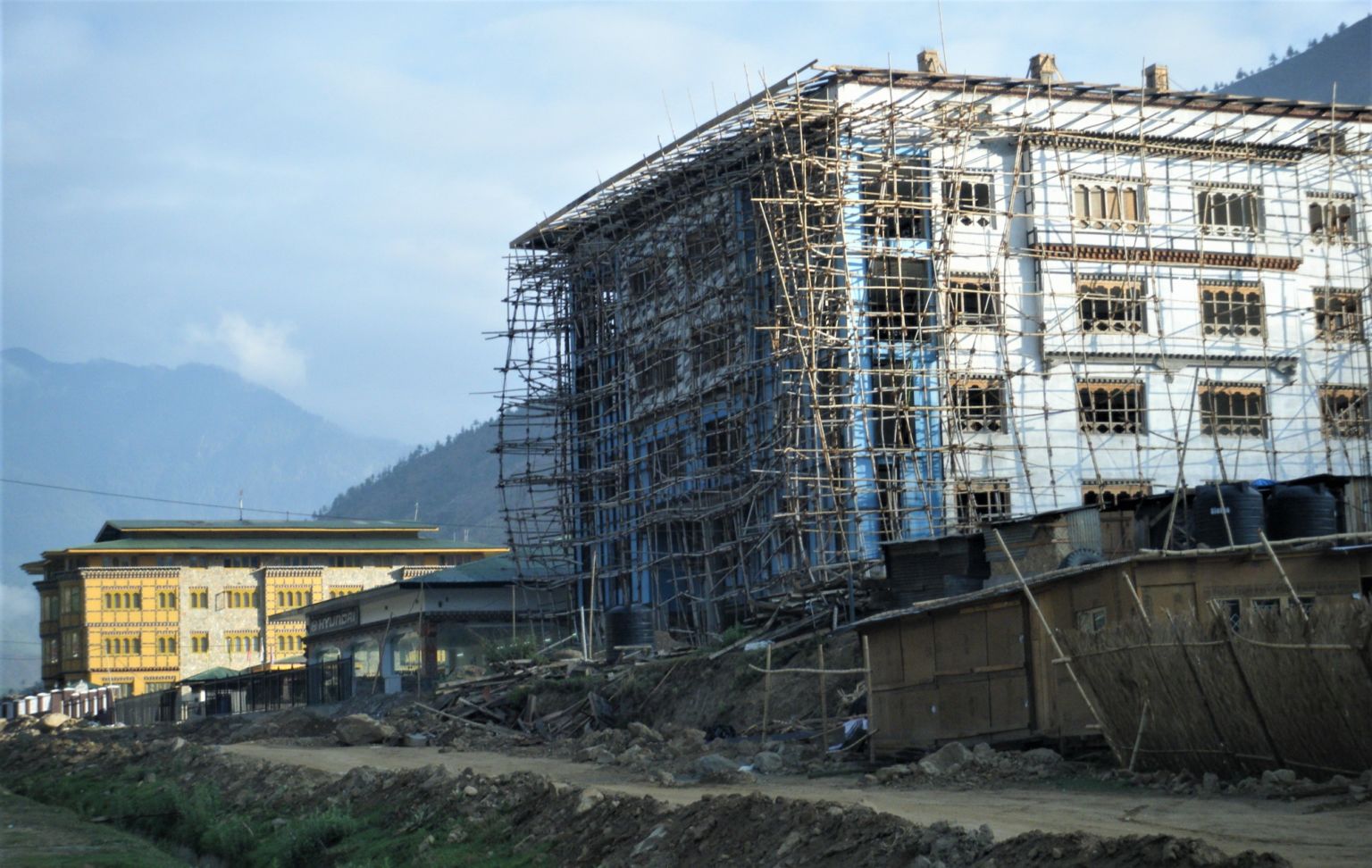 At the time of our visit there were a lot of  construction projects in Thimphu, the capital. The bamboo scaffolding had a very light, almost cobweb feel, and looked dynamic and informal to our western eyes. 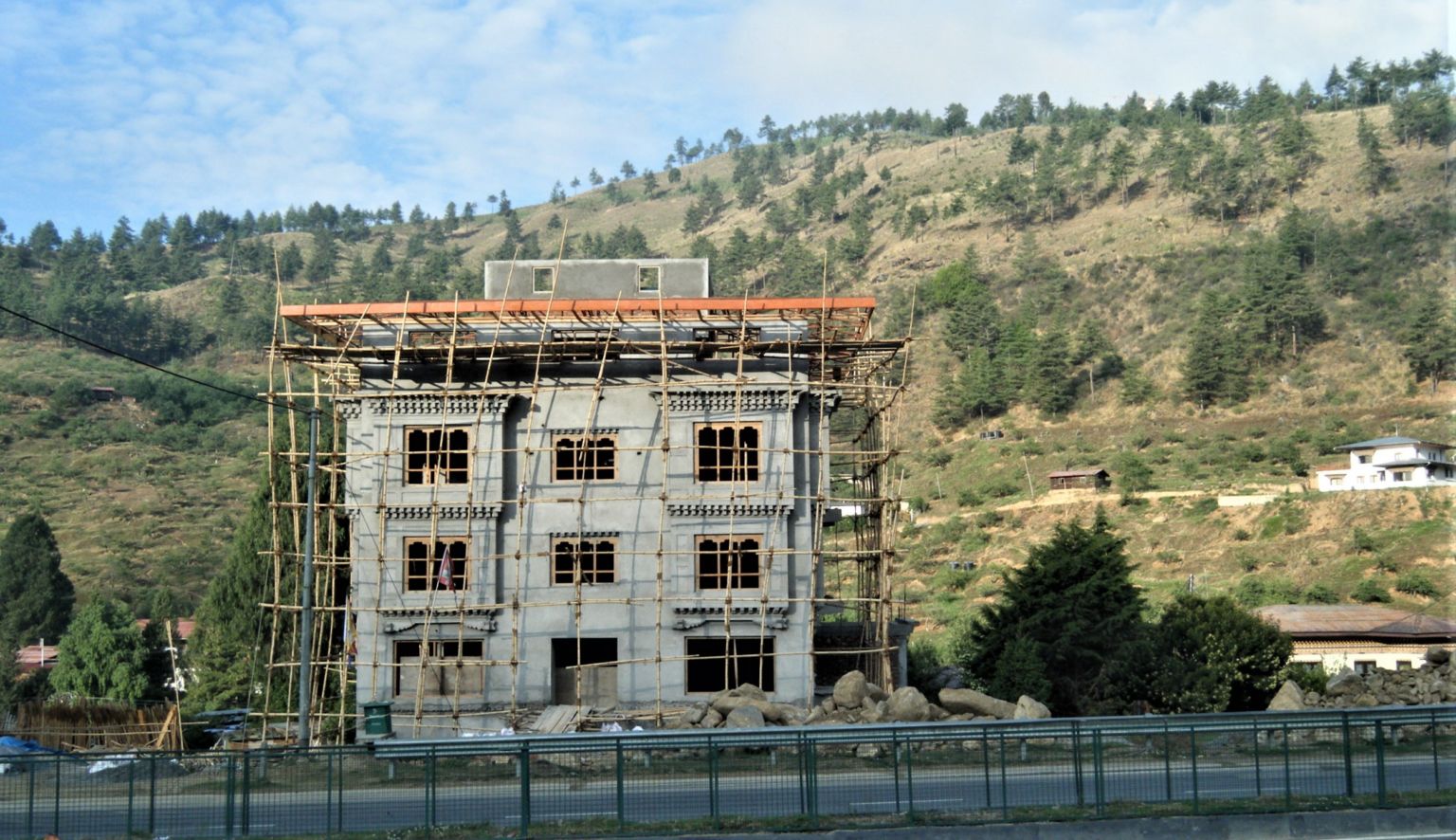 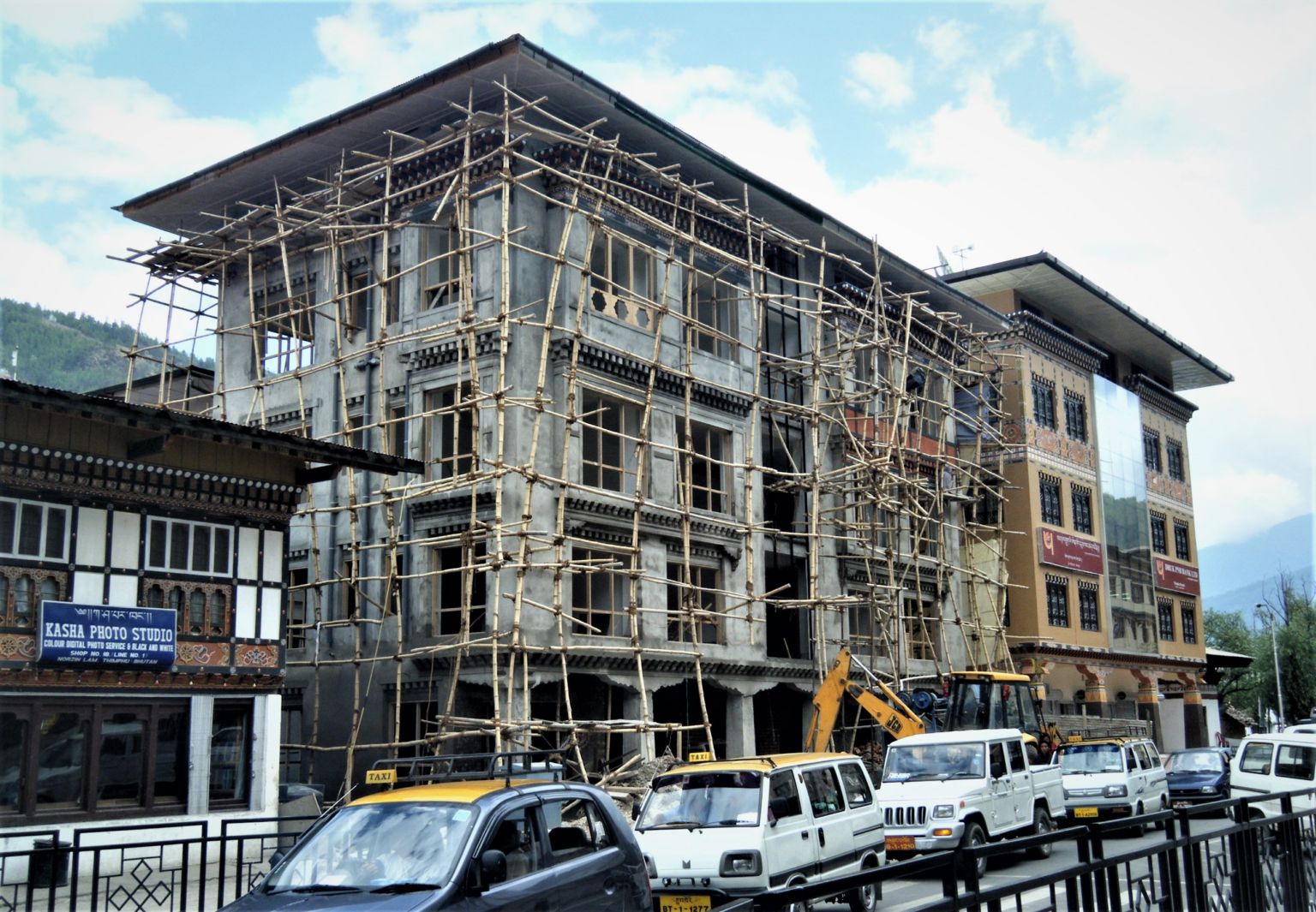 I’m a huge fan of using scaffolding to support a scrim that is printed with an image of the building that is concealed. In Glasgow we searched out the 1870 Egyptian Halls, a masterpiece designed by Alexander “Greek” Thomson. It turned out that the upper floors have lain more or less empty for the last 40 years, and a scaffold protects the crumbling stonework and supports an illustration of what the building should look like. The struggle to save the building appears to be never ending. 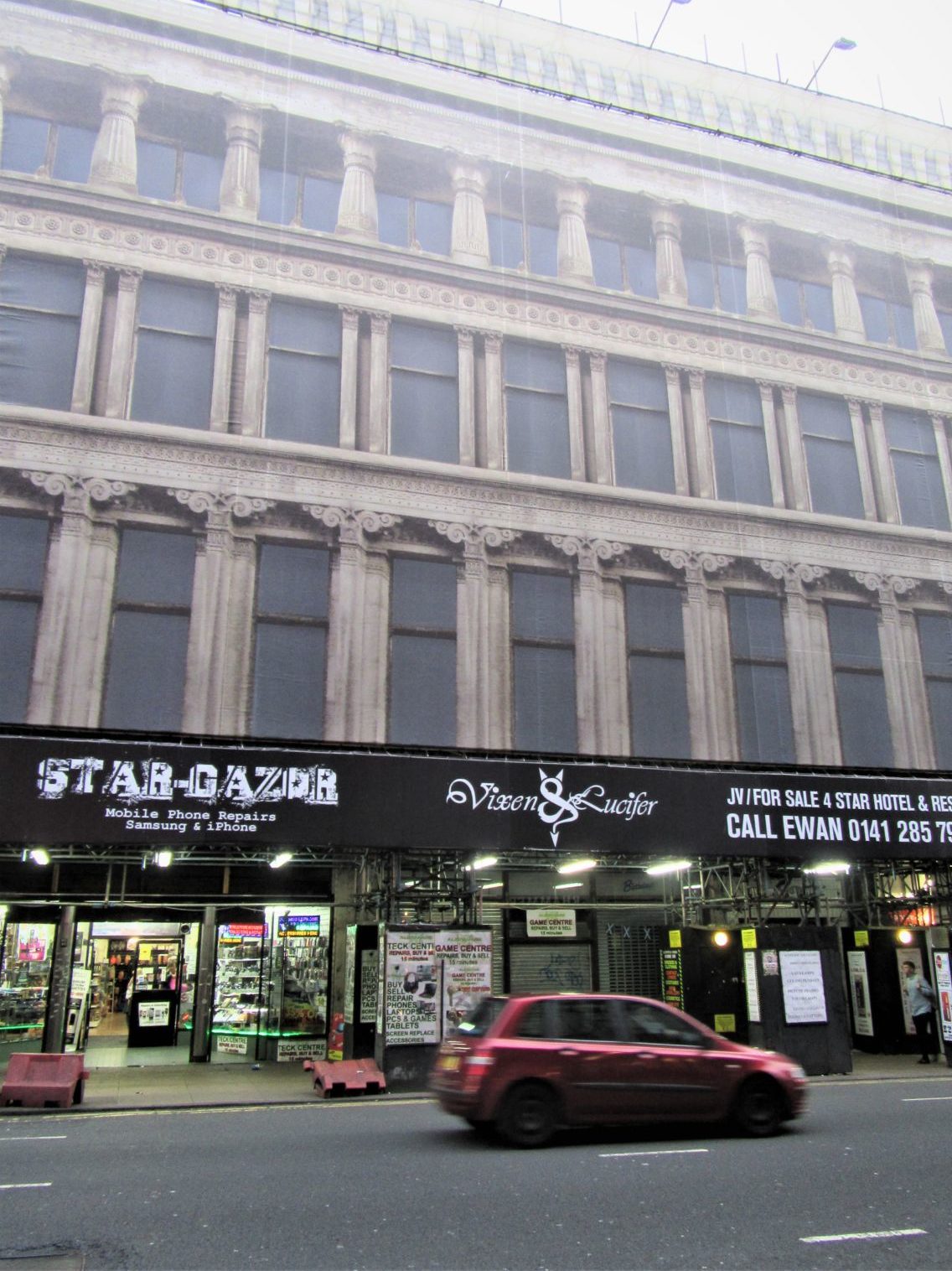 When we were in Glasgow, in 2015, the Charles Rennie Mackintosh-designed School of Art building was still being restored after extensive fire damage in 2014. There was a photo of the front steps closing off the front steps. Notice the small door in the photo. Art school perfect. 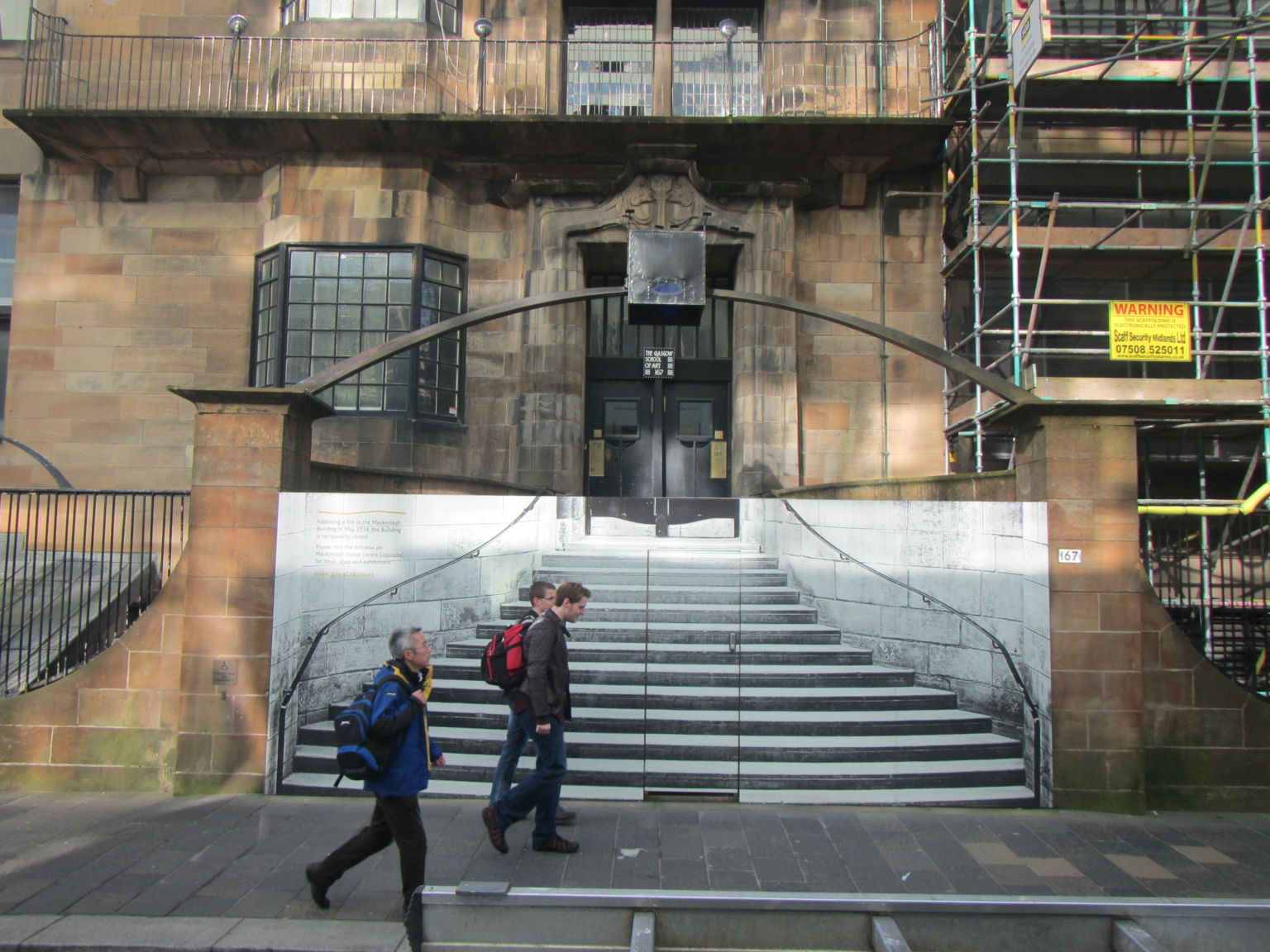 In 2018 the building burned yet again.

Sort of a waste

Regularly buildings in Halifax get wrapped in boring white. Imagine if the scaffold on City Hall in 2011 had an image of an old growth forest or Dalhousie College, the building that was once stood in that exact location. 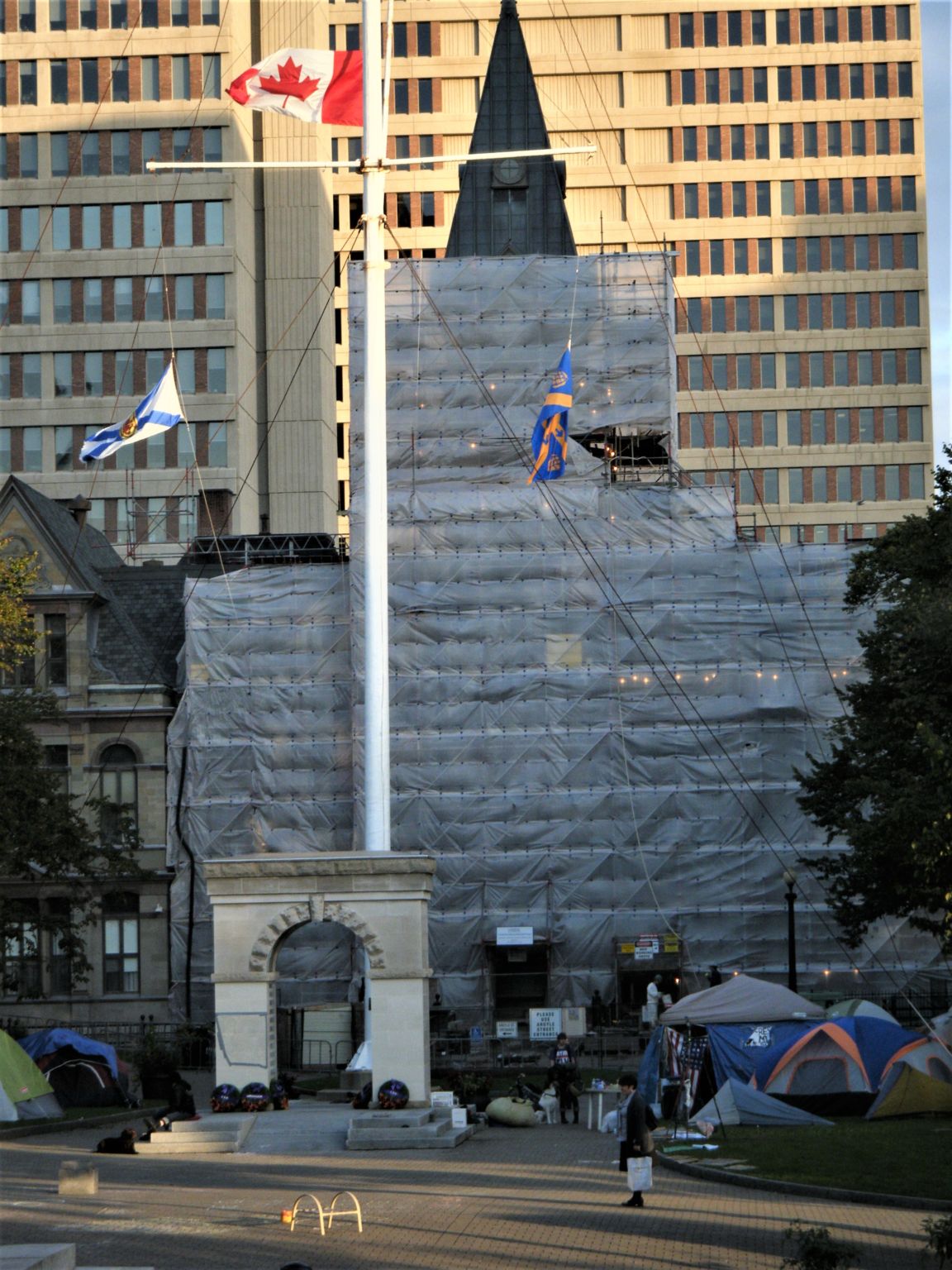 Do you have favourite memories from Nocturnes past? One of ours was in 2011, a large scale projection of a market street in Kabul, Afghanistan. A camera had been set up in the middle of the street while people steamed past. For Nocturne a large projection screen was erected in the middle of Bedford Row and standing in front of it felt, for a moment, like you were among ordinary Afghans in a vibrant public space. Transformative. 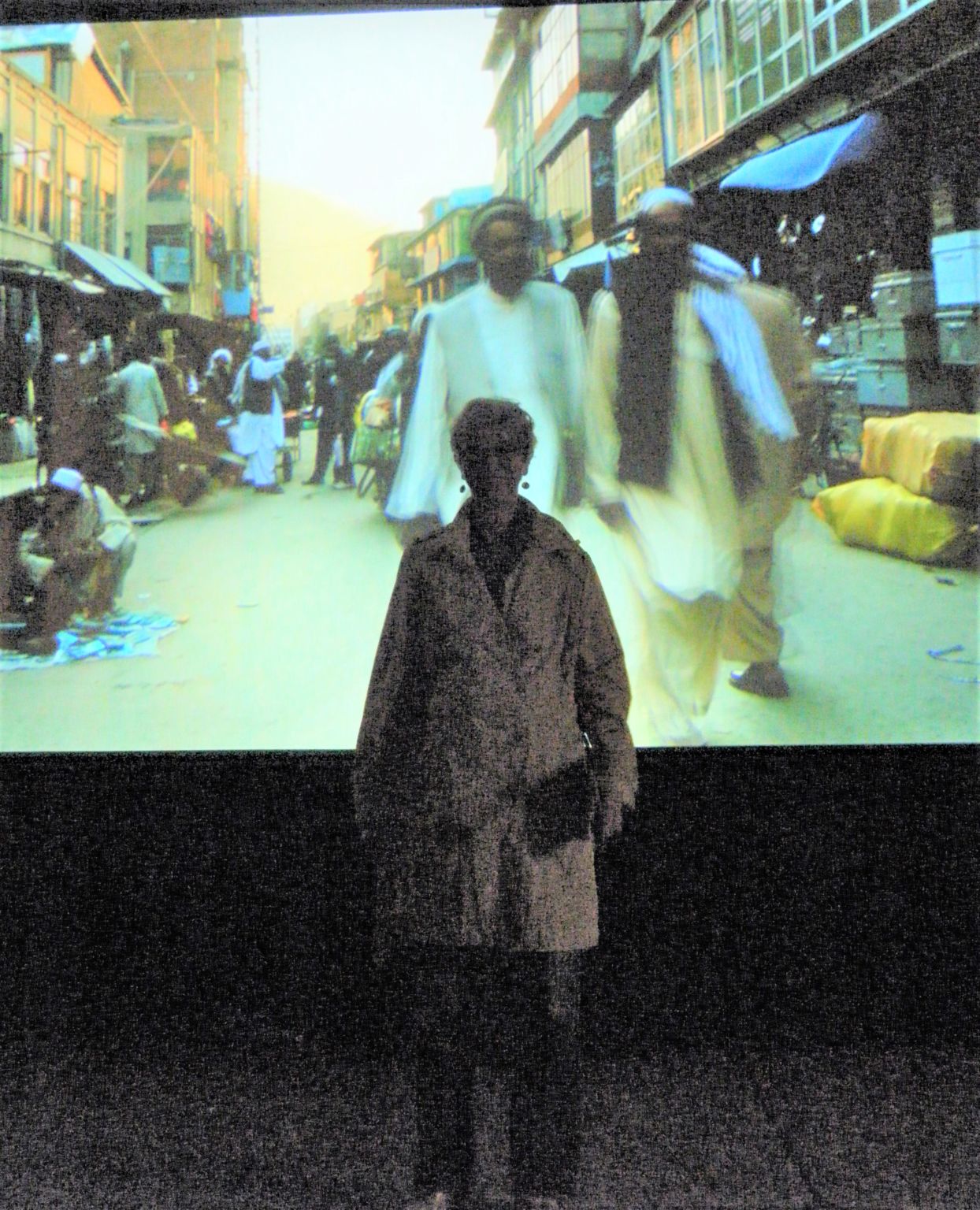 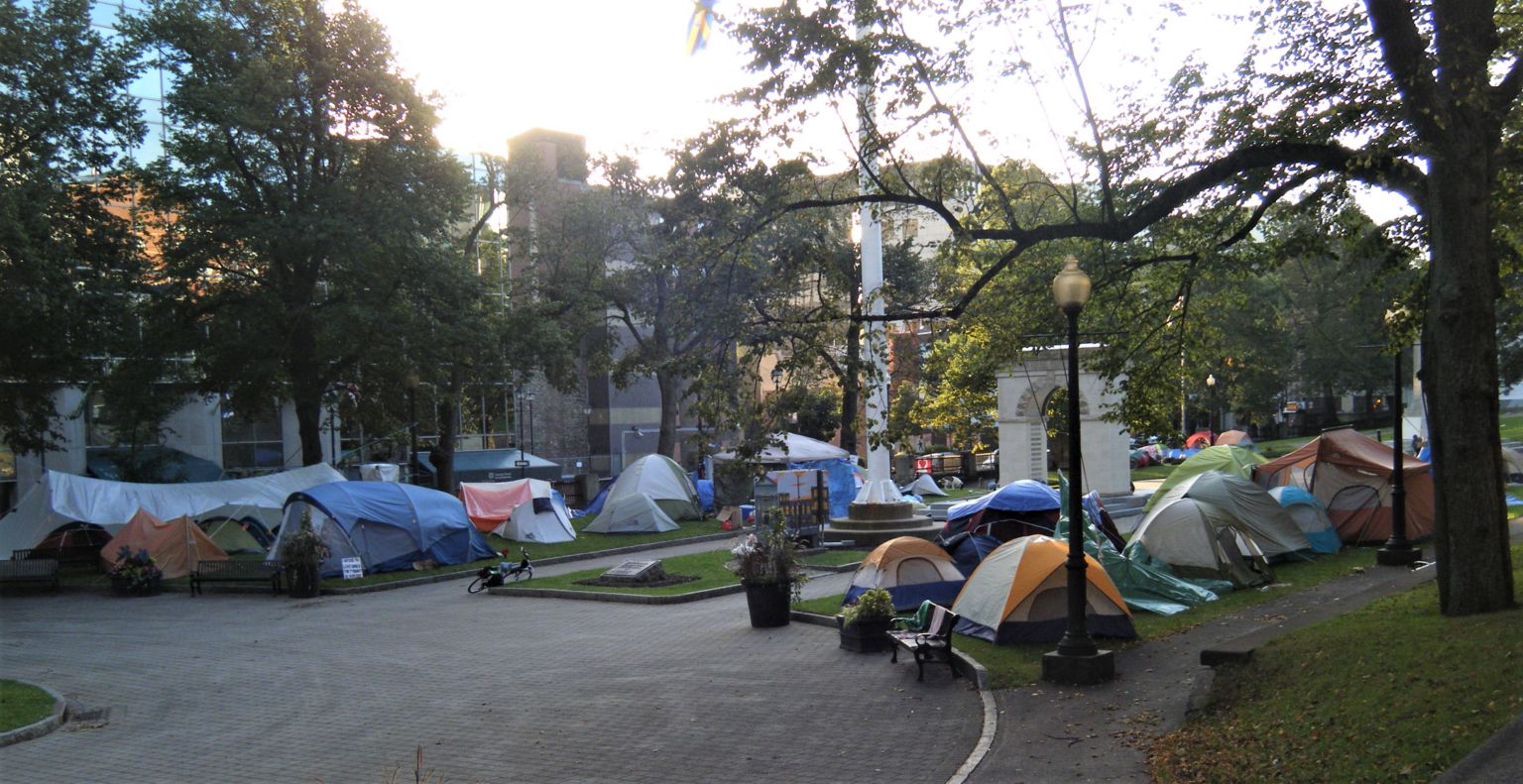 Their encampment was a stop on Nocturne, where we noticed this prediction chalked on the pavement. 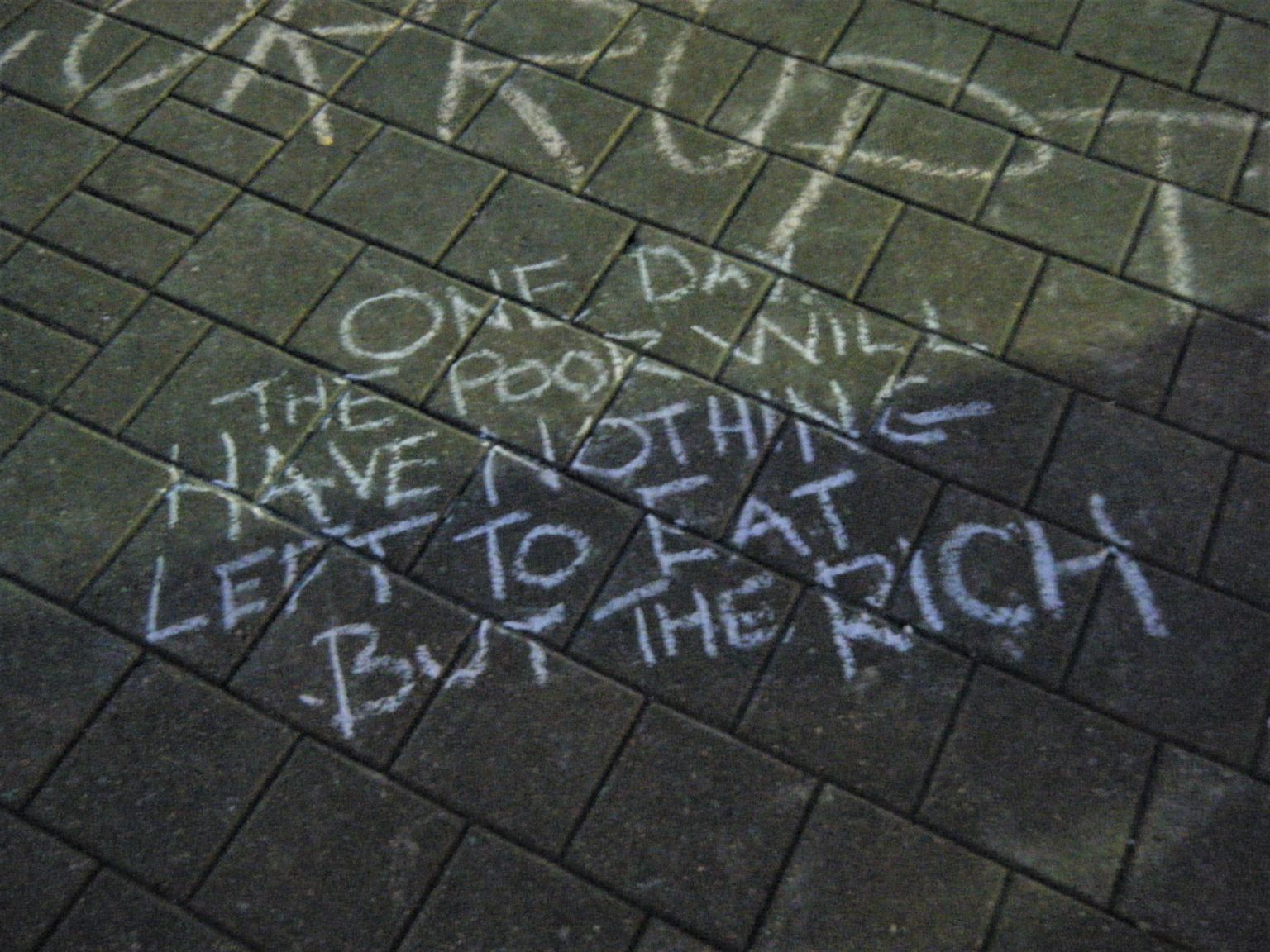