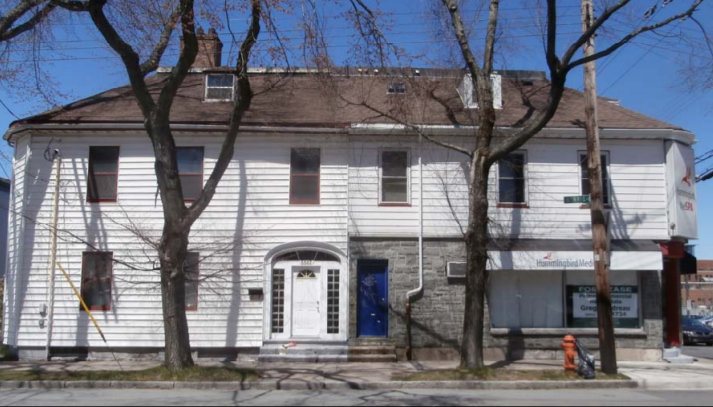 In April I was coming out of Atlantic News and noticed that the building across the street was being stripped of its many layers of siding. I posted a picture on Twitter and wished good things for a building that had lost its dignity a long time ago. The Twitter post gathered 10,000 impressions so I knew other people had all the feelings too. 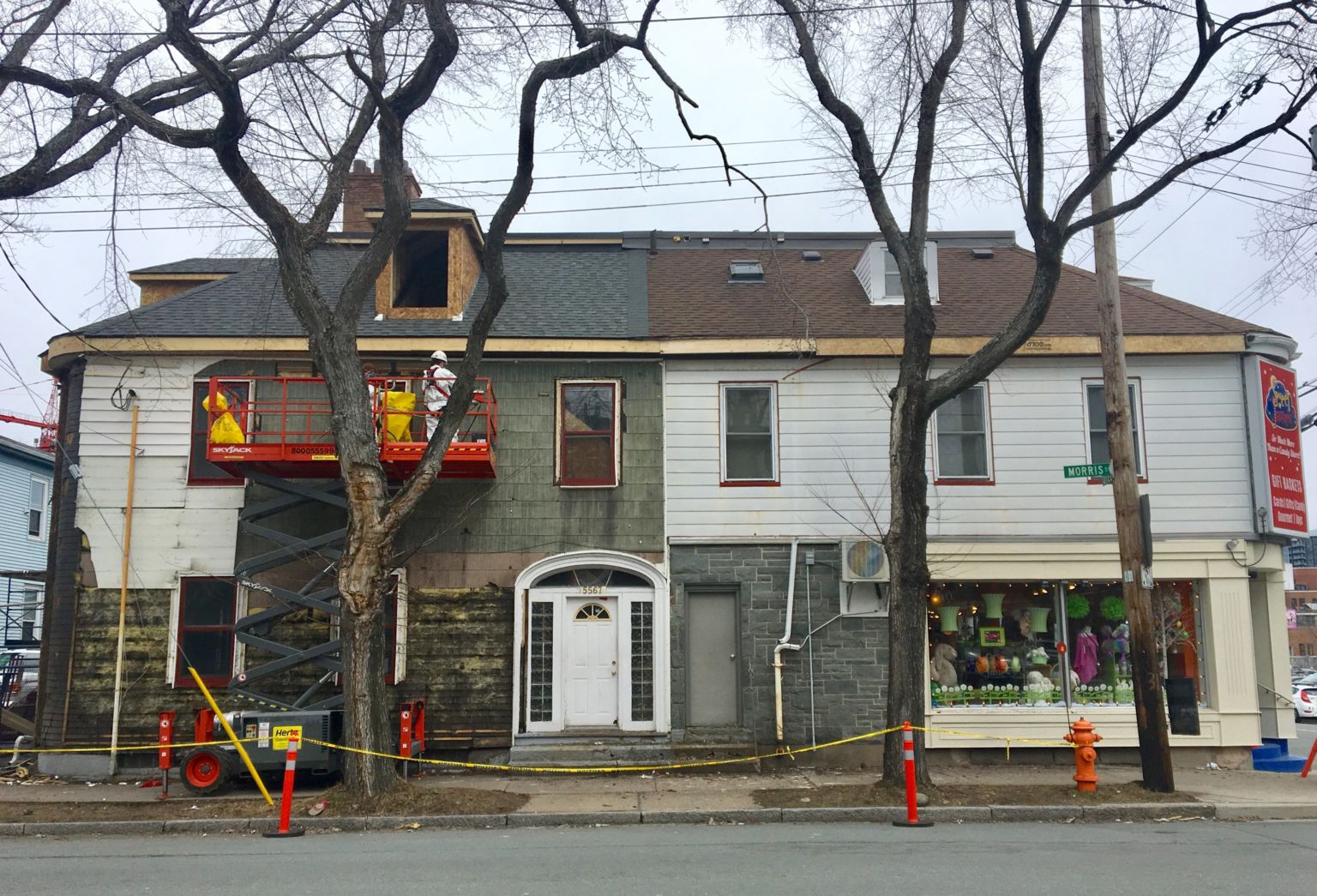 The building has been in my consciousness for decades because of an NS Museum photo that showed the house c1925. Then, it was clearly a double residence with an extraordinary rounded corner, a striking feature on a wooden, shingled building. 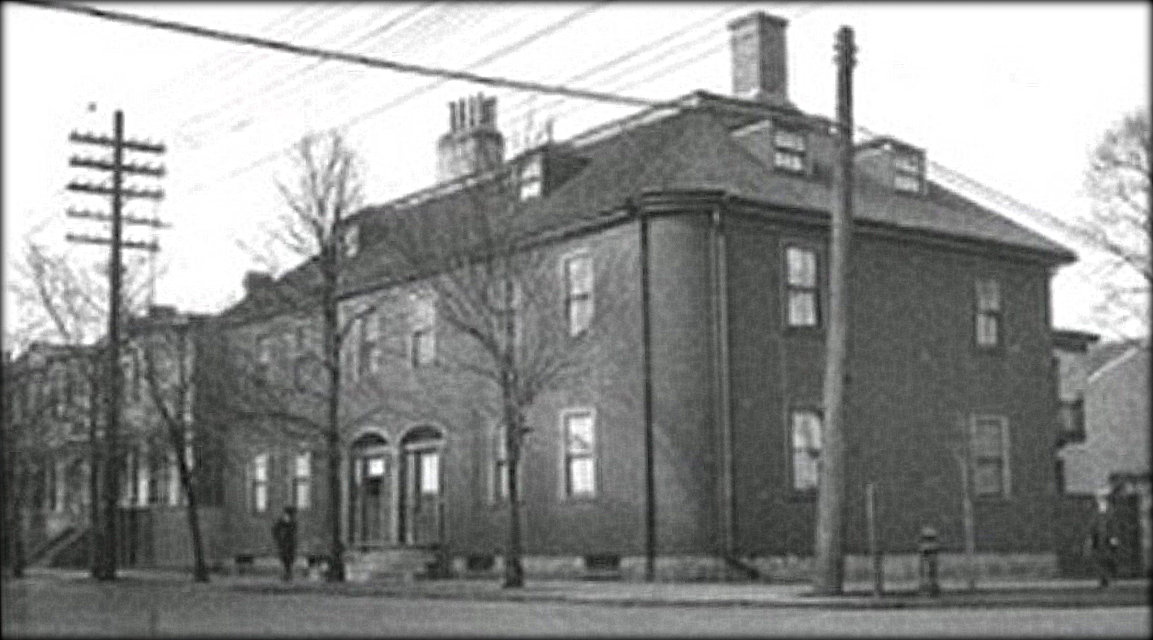 The houses were built about 1830 and purchased by Enos Collins, the most influential and wealthiest business man in Nova Scotia, for his daughters Frances (her husband was a Lieutenant General) and Margaretta (her husband would become mayor and later premier). So it is safe to assume that in the 19th century this was a very good address. More history can be found in the listings for each side of the building in the Schmidtville Heritage District Conservation Plan (download here).

In April what really got me excited was that the siding removal had revealed another rounded corner, at the western end of the Morris Street facade. Perhaps the shingles were even the original from the 1830s. A very special discovery for anyone who notices old Halifax buildings. 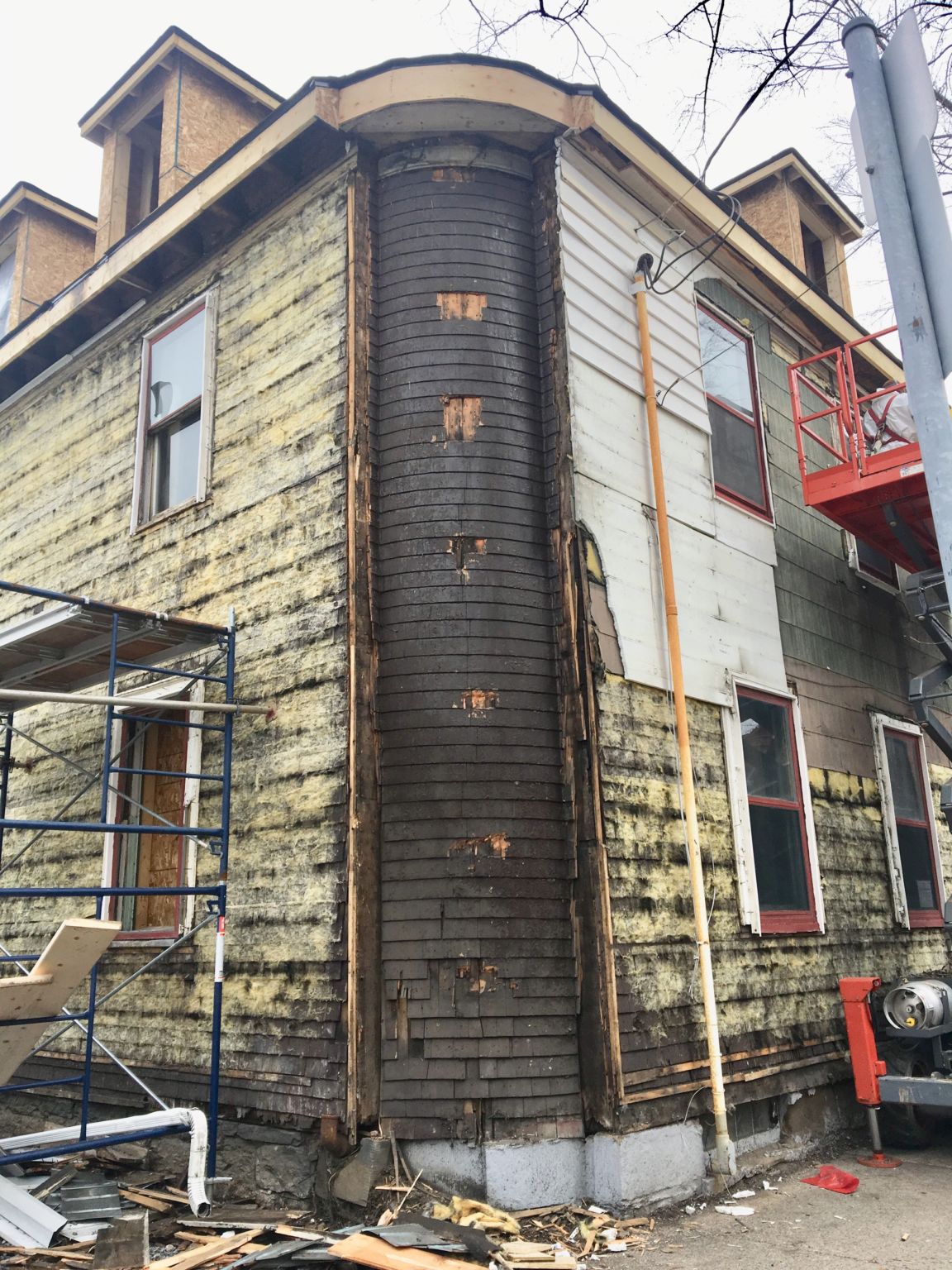 As a result of my enthusiastic tweet the builder and the designer for the renovation project asked if I would like to see inside the building while the interior structure was still exposed. Why, yes we would. So Sheila and I visited in early July and had a generous tour with the builder, Nick Bezanson (who works with his brother Devon), and the project designer, Lorrie Rand.

Here are some special details that attracted my attention.

The curved corner clearly showed that the house had been painted many times and that the last colour was a dark brown. Houses in Halifax were heated with coal into the 1950s, and painting your house a sooty colour was a tradition that made lots of sense. 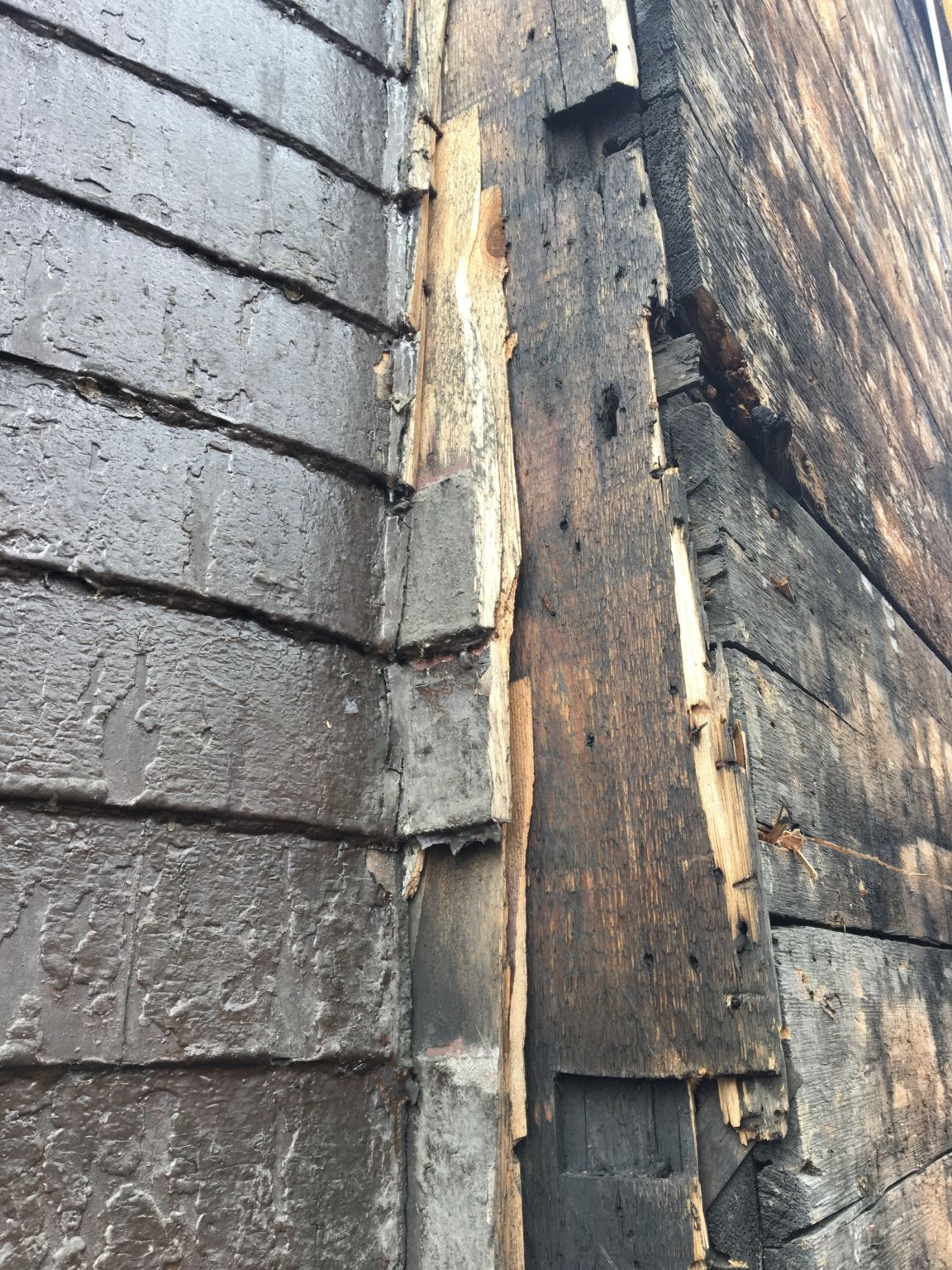 Under the layers of siding the boarding was in perfect condition. The parallel marks in the surface show that the boards were cut in a mill with an up and down saw (predates circular saws). The water-powered sawmill at Sherbrooke Village produces planks that look exactly like this. Here’s a video of that mill in operation. 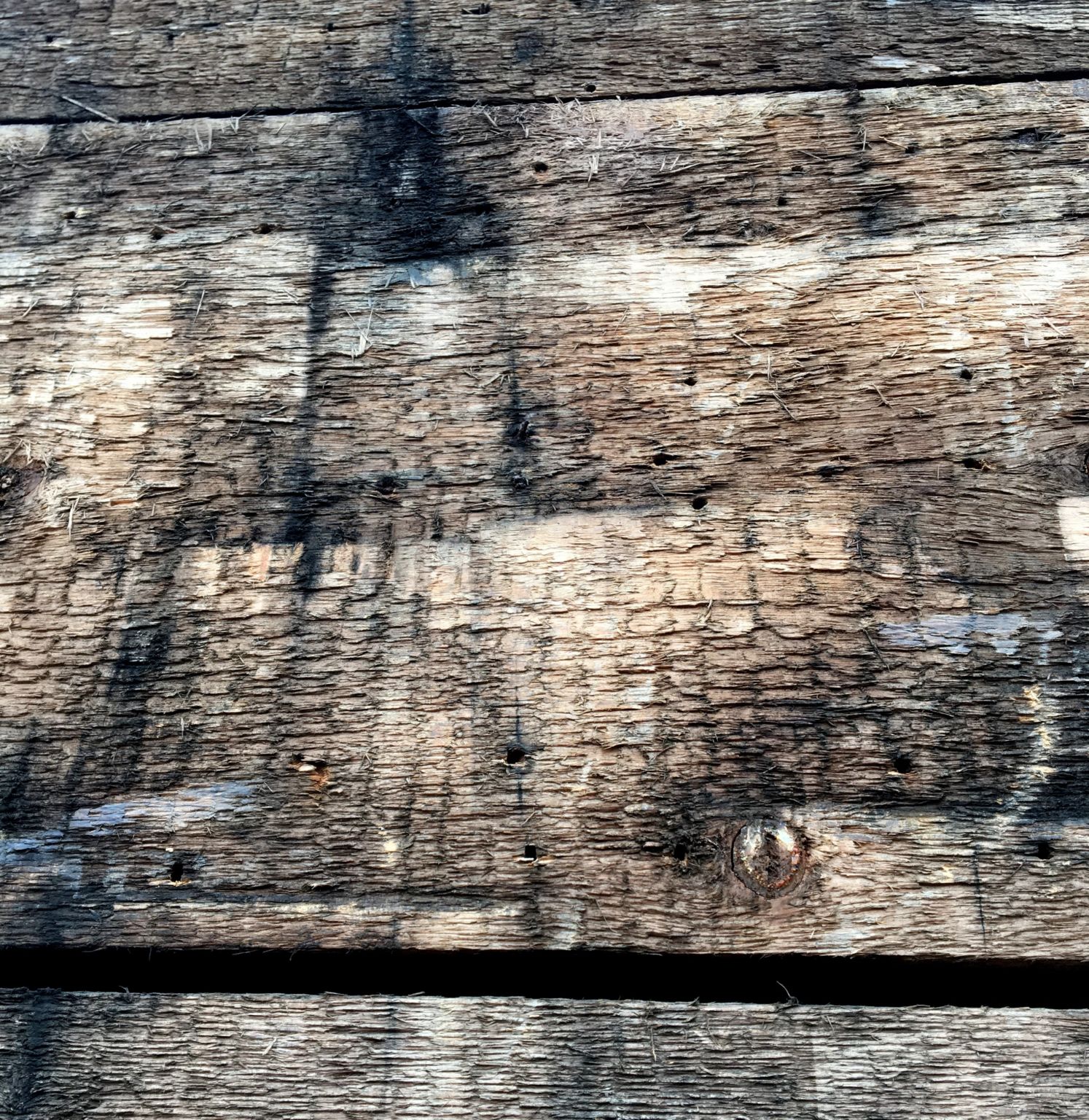 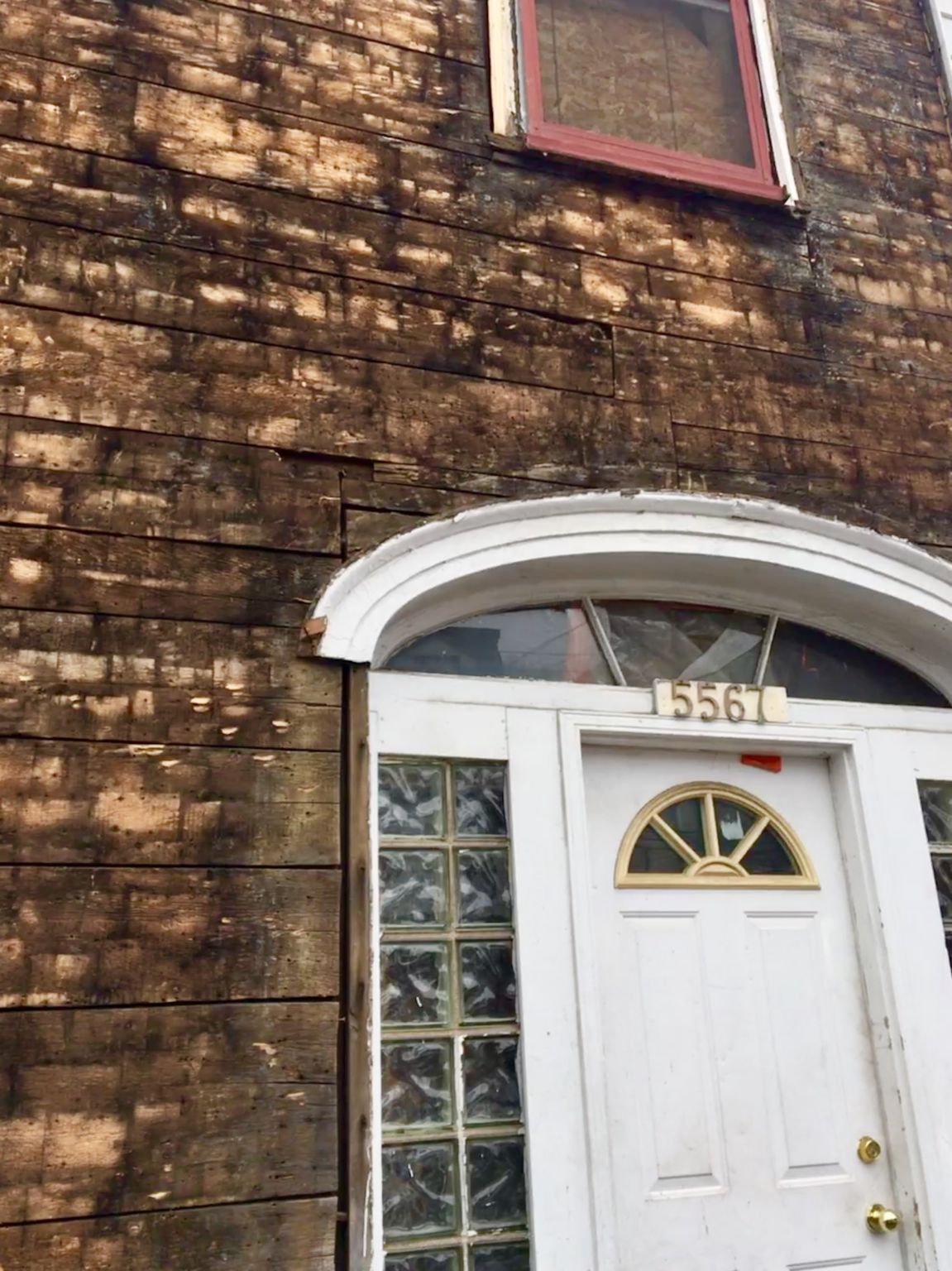 This feature is hard to capture in a photograph, but the most surprising thing I saw was that the interior side of the exterior boarding had been plastered. I have never seen this before and guess that it must have both sealed drafts and provided some fire proofing. The plaster was in amazing condition, but in a cracked area we could see that it contained the traditional reinforcing material, horse hair. 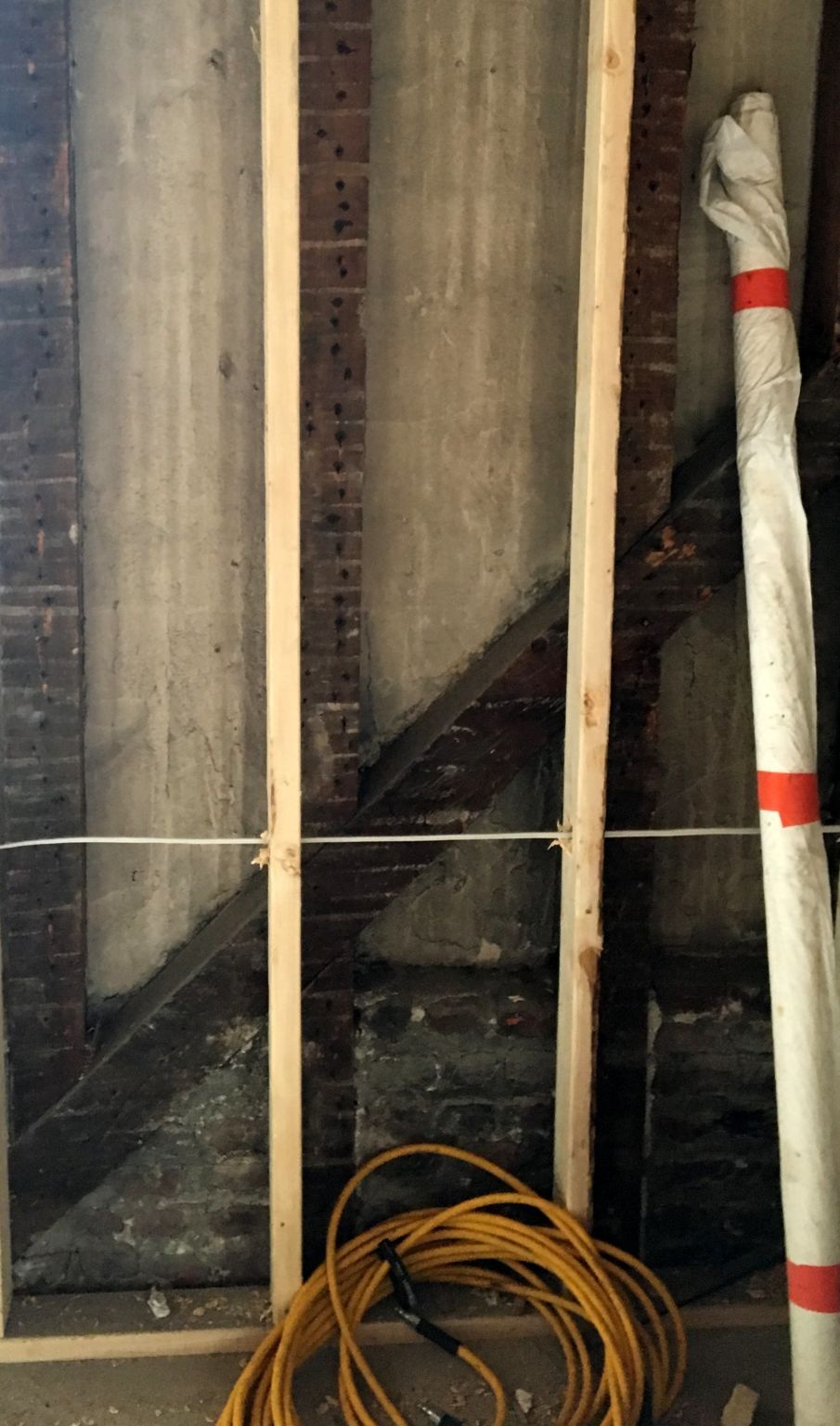 Another fireproofing feature was brick infill between studs of the party wall that separated the two homes. I loved this brick. It was never intended to be seen, so like the plastered boarding, the bricks were concealed by the finished surface of plaster and lath. The individual bricks had beautiful colours and loads of character. They were obviously handmade, locally I assume. 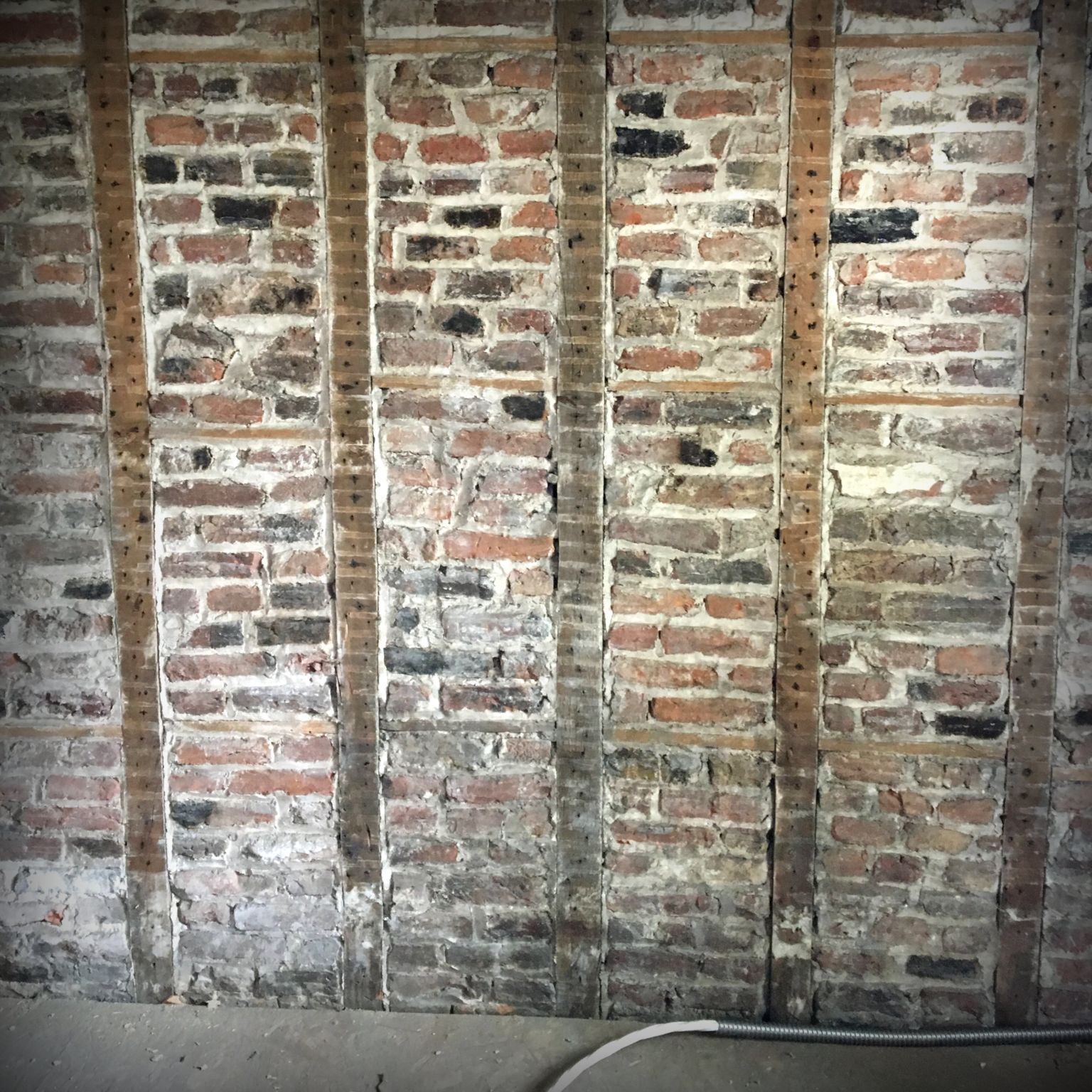 Slightly better quality bricks were used in the massive central fireplace/chimney system that extended from the basement to the roof. 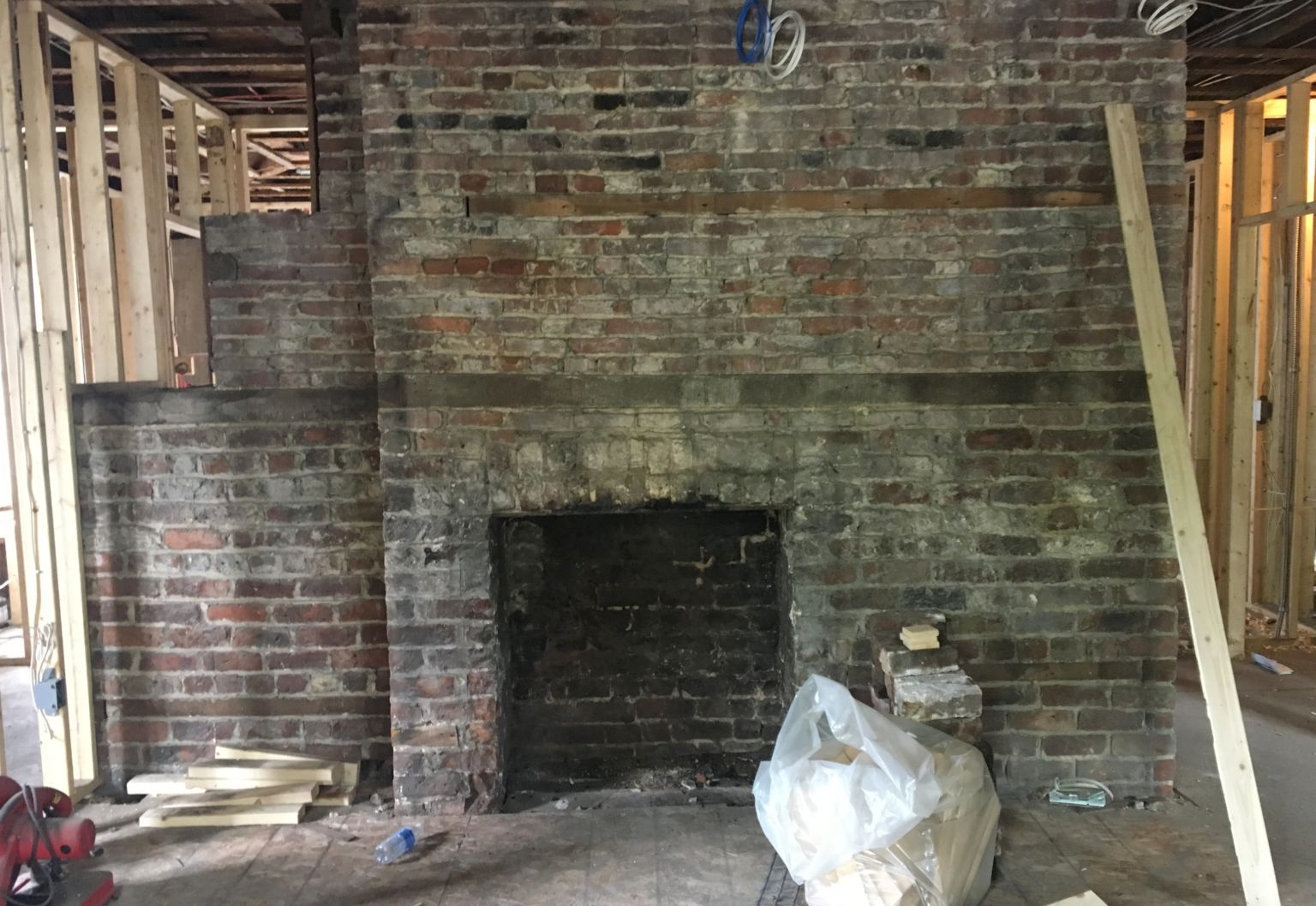 The timber frame of the house is robust. The fresh two by fours, already installed for new walls, look remarkably slim compared to their chubby ancestors. It was a particular treat to see how the curved corner was framed inside. 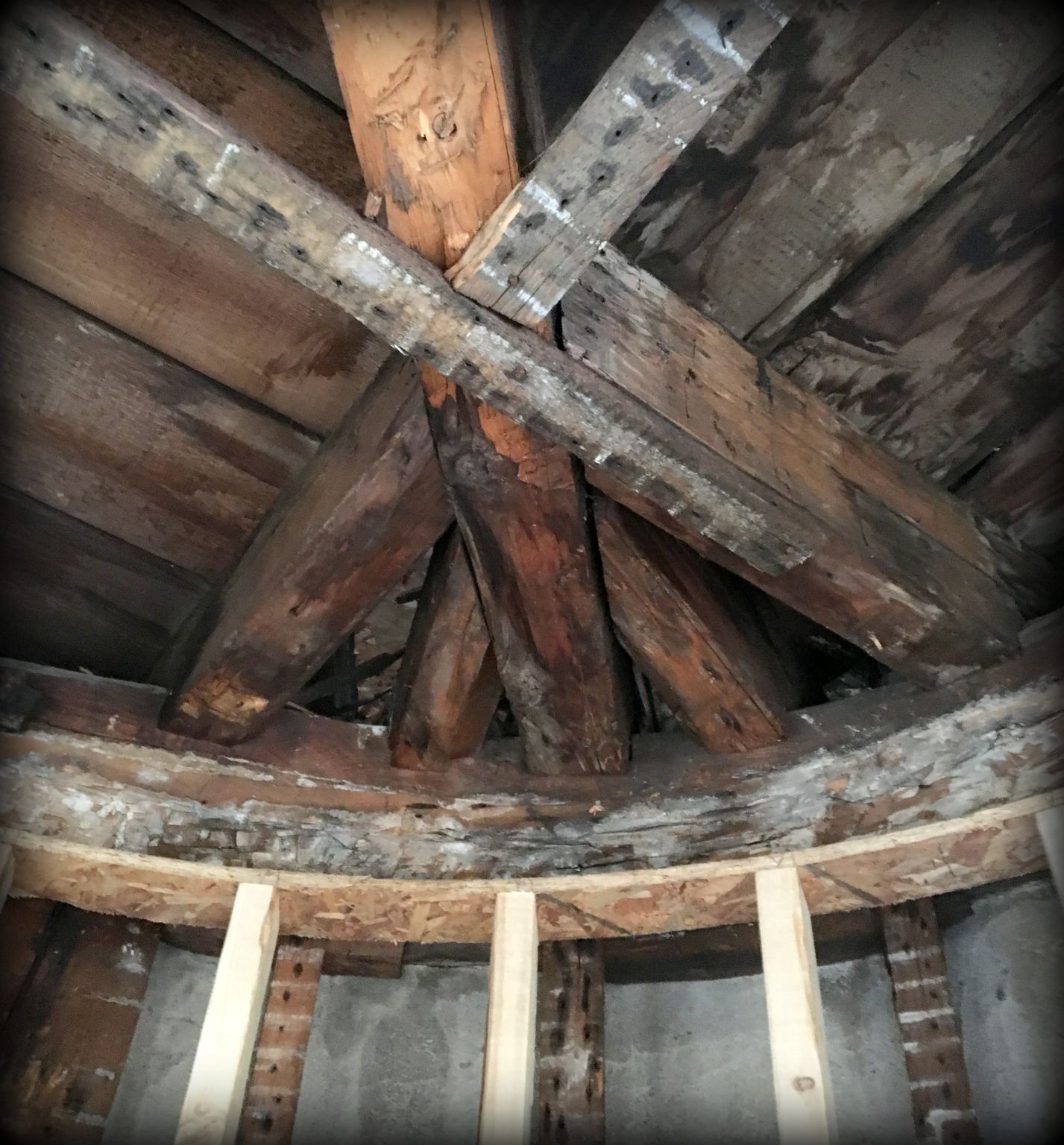 All the heavy timbers were mortised and tenoned together, their joints numbered for easy assembly. 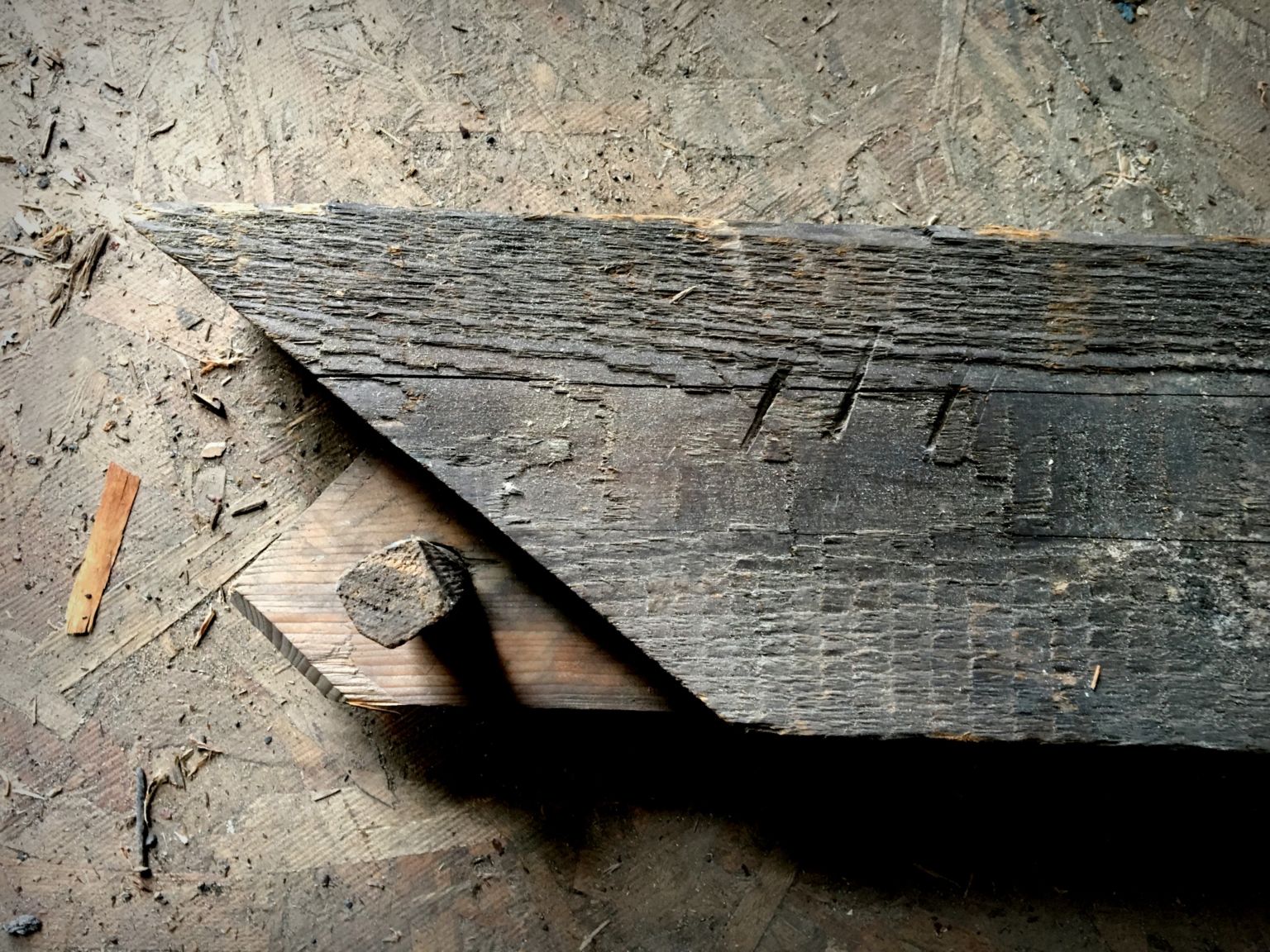 Like most big houses in Halifax at this time, the kitchen was in the basement. Food was cooked on a large open hearth. This fireplace had been bricked in, probably when the household got a modern cast iron cook-stove, perhaps in the 1850s.

As a lover of old cast iron, I was joyful to see that the door to the brick oven was still in place next to the filled-in hearth. The angled beam of our flashlight revealed elegant Georgian style decoration. 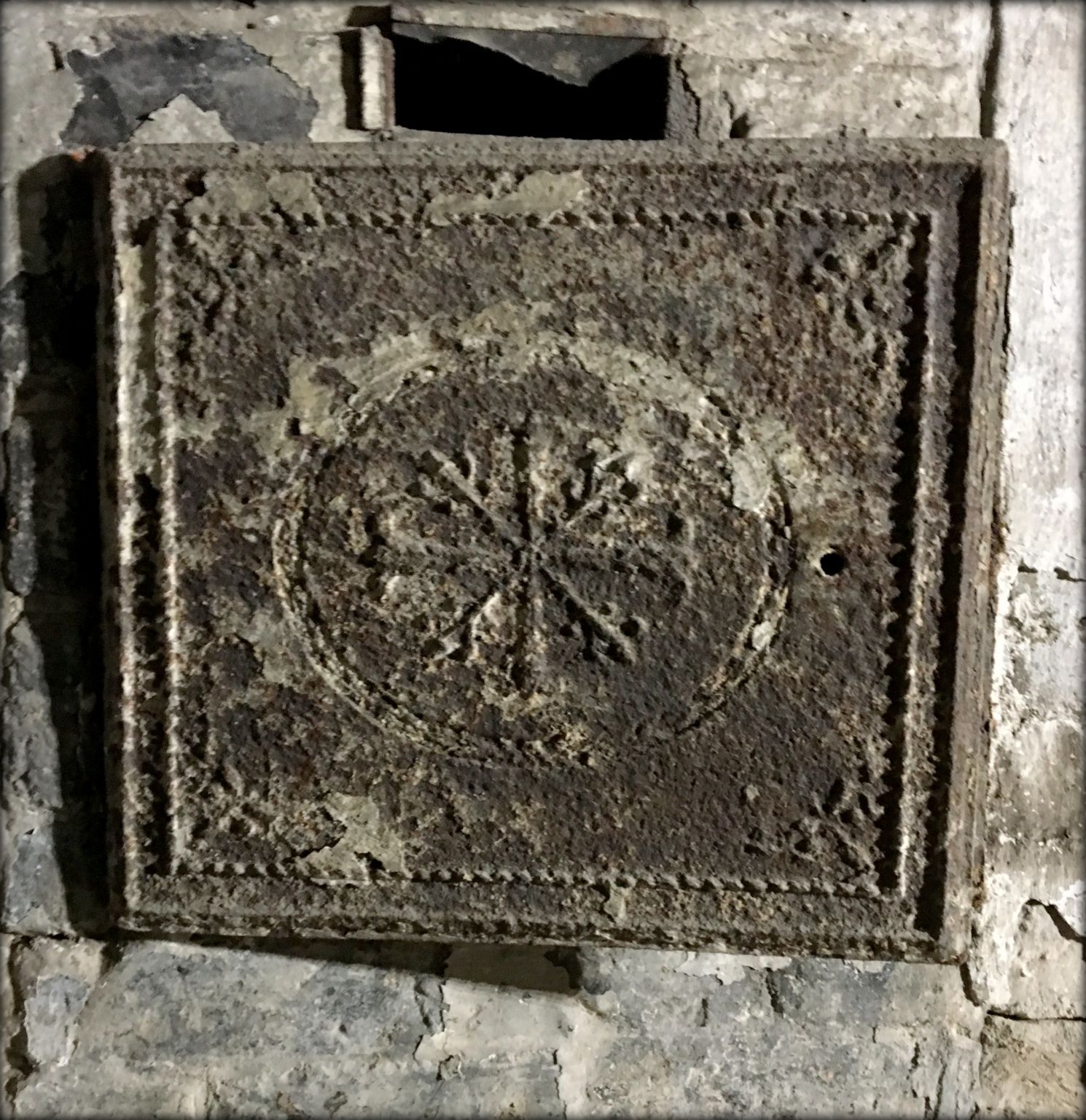 Outside the main foundation to the west there had been a good-sized underground chamber with a brick arched roof (it was removed last fall). The room was reached through a door in the foundation from the kitchen area and was probably used as a cold room where food could be kept cool in the summer, and protected from freezing in the winter.

There had been an identical structure attached to the other half of the house with this chamber located under the Queen Street sidewalk. Conveniently, the Municipal Archives has some photos of it taken around 1960, when new sidewalks were being installed. 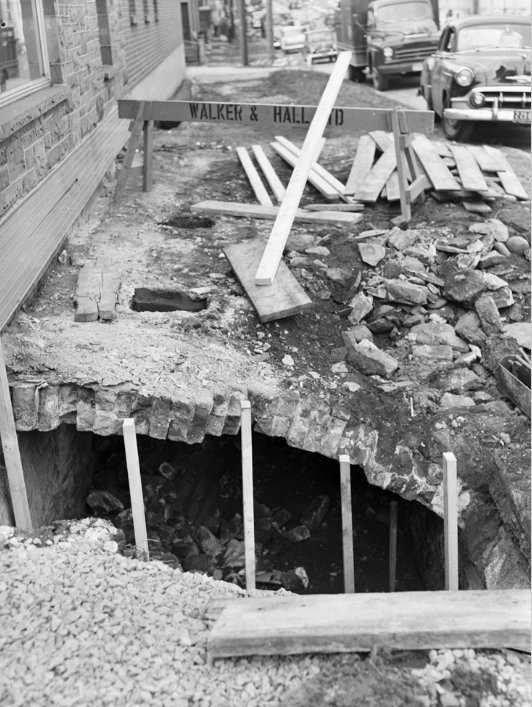 When the brick arch was removed the door to the kitchen was visible. 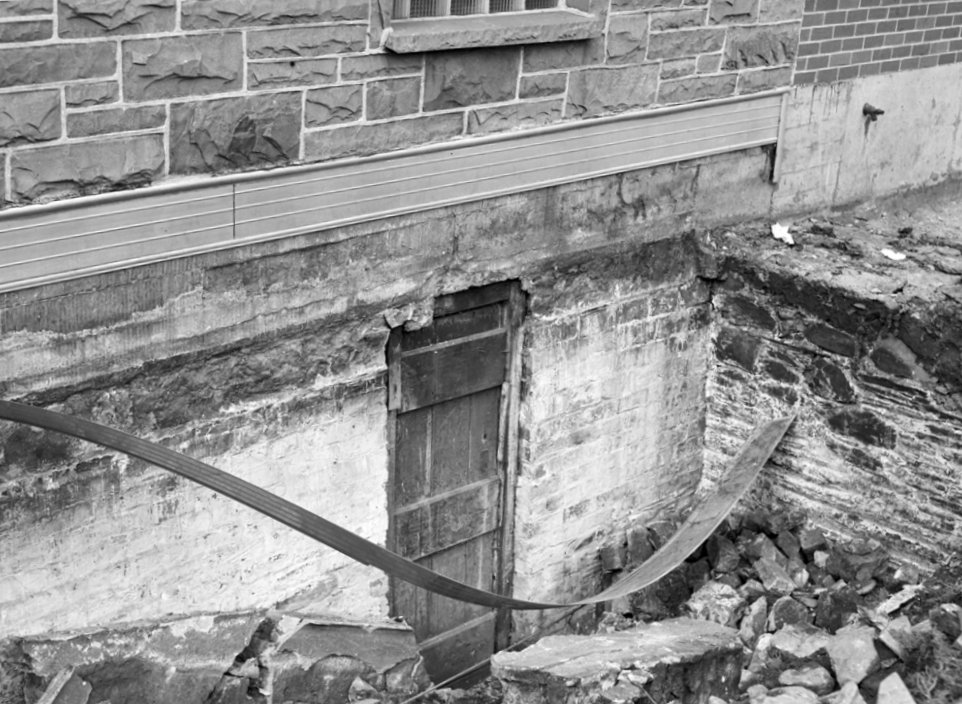 As Nick and Lorrie guided us through the work site it was clear they were very excited about the project. When finished, the house will be a number of apartments, each very different, as the design responds to the envelope of the house and its special character. Feels like it is going to be a good place to live.

Here is Lorrie Rand of Habit Studio at the end of our visit. Nick had already dashed off to another project. 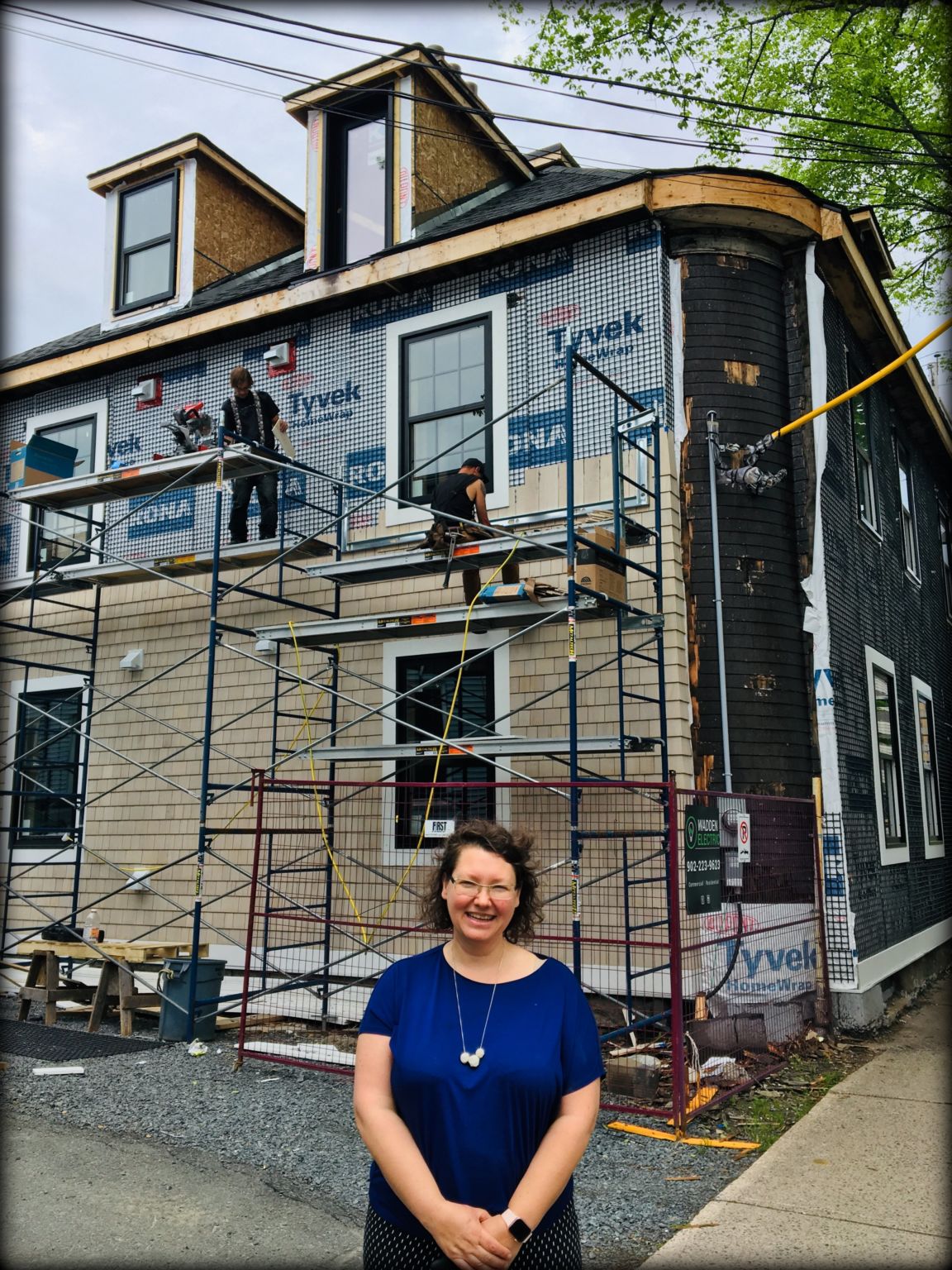 I’m often not particularly interested in the stories of famous people (men) who are associated with old buildings. I looked up Enos Collins to see what he was up to about the time he bought these houses in 1830. Turns out he was at the centre of the unsavory “brandy dispute of 1830” and would have had some extra money kicking around. A couple of years later, Collins was agitated that the Bank of Nova Scotia was granted a charter, thus destroying the monopoly of his Halifax Banking Company. Soon the two banks were involved in a currency battle which weakened the financial stability of the colony. But his daughters had really nice houses. See more of Collin’s colourful history here.

The story of the house that really captured my interest was told by Nick. The house was bought by Gus and Helen Mandros in 1954 and it remained in the family for sixty years, until 2014. The Mandros were members of the vibrant Greek community, and their home was often where new immigrants from back home spent some time when they first arrived in Halifax. Many people feel a connection and affection for the home. 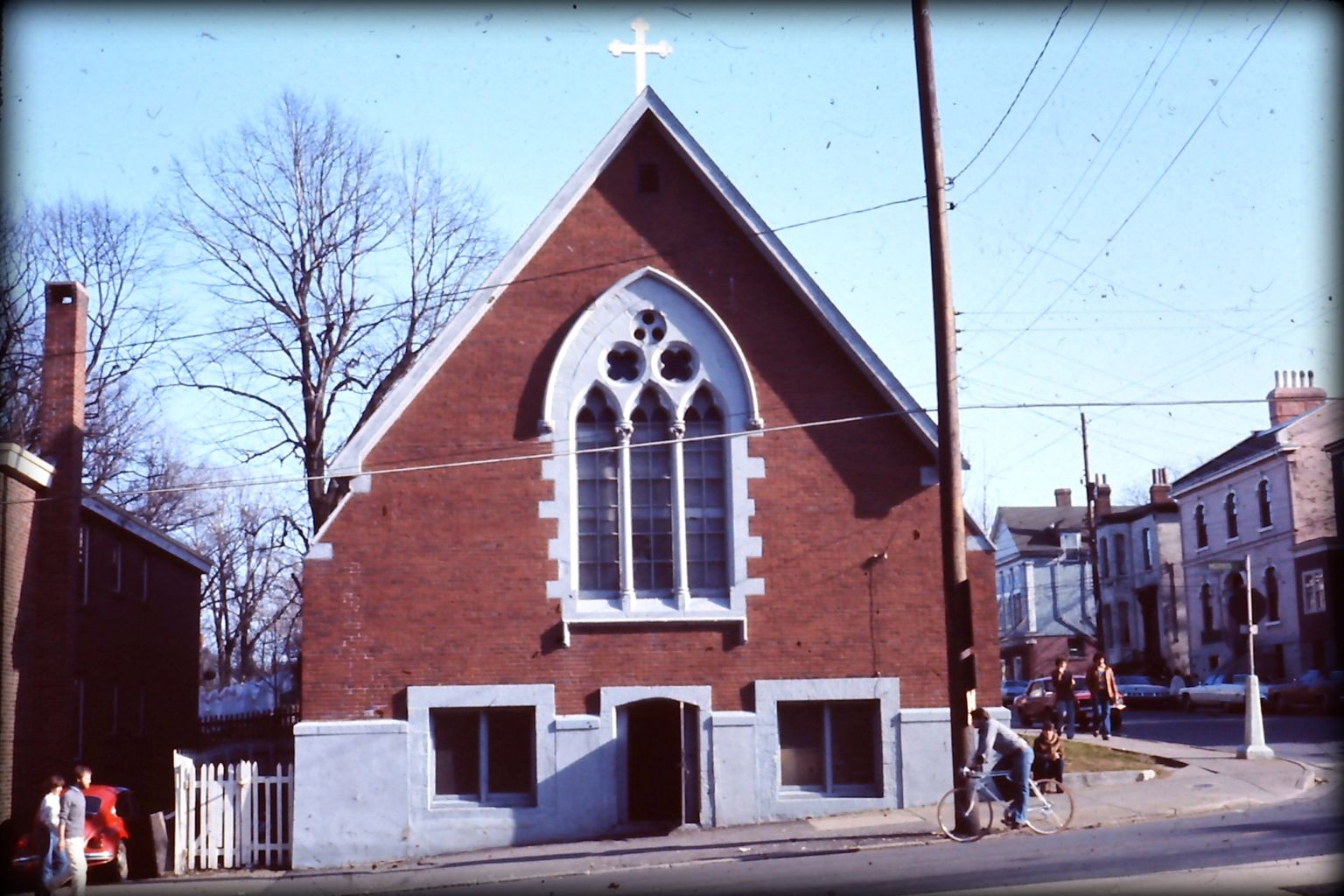 Later I realized that St George’s, the Greek Orthodox church, had been located just across the street, in an 1863 building that the Church of England built as a school, and that is now condos. The Saint George’s congregation bought the building in 1941 and it was the centre of the Greek community until a new centre (1977) and church (1985) were built beside Melville Cove.

I really was excited to see the oven door. Here are some other examples of oven doors to improve your search image. 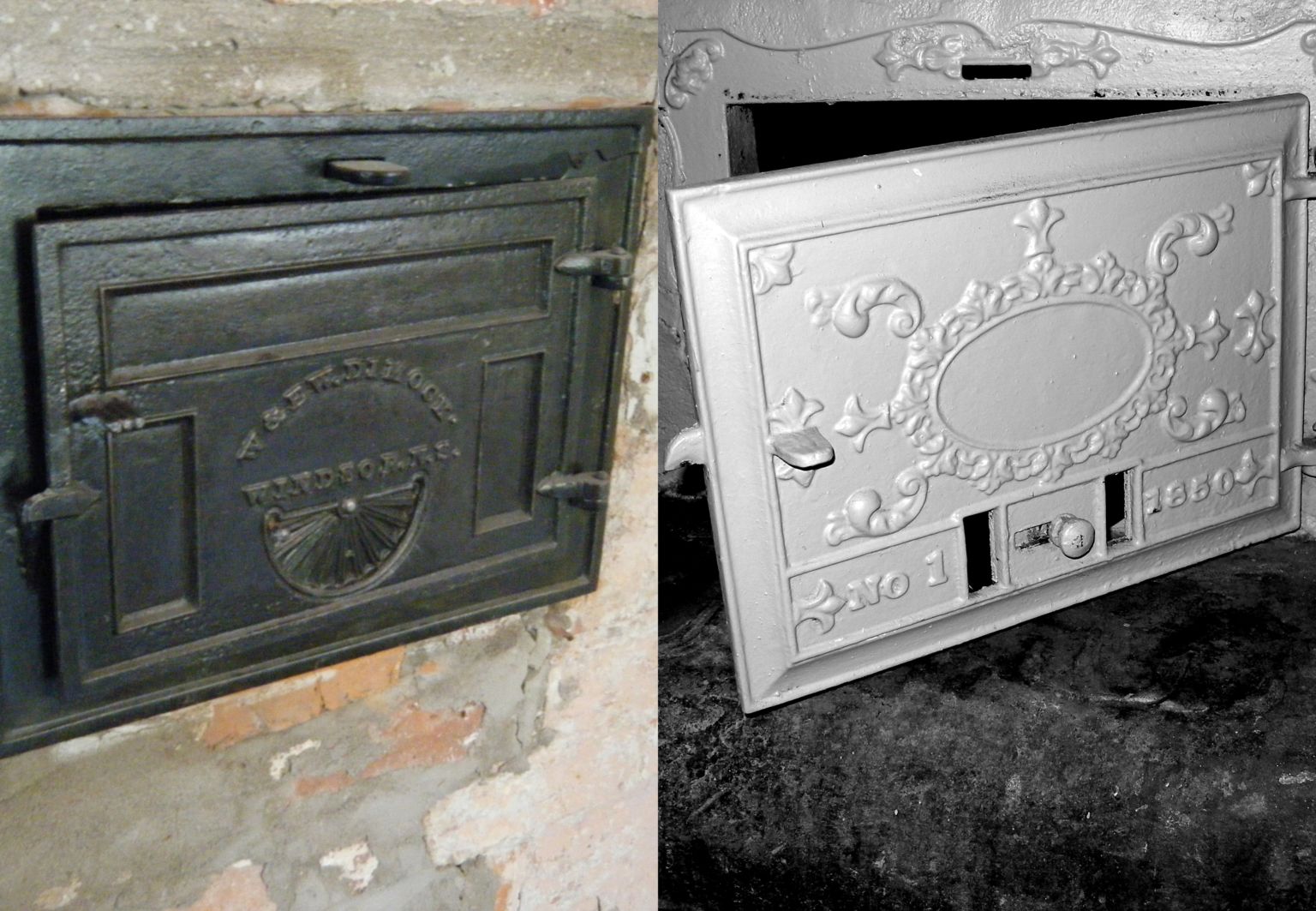 What’s with the curvy corner?

I know that I’ve seen images of buildings with curved corners, like the ones on the Morris Street houses, but I can’t remember where. Government House has sweet little curved elements where walls meet on the Barrington Street face. These are not the same as the Morris Street curves, but they share DNA. 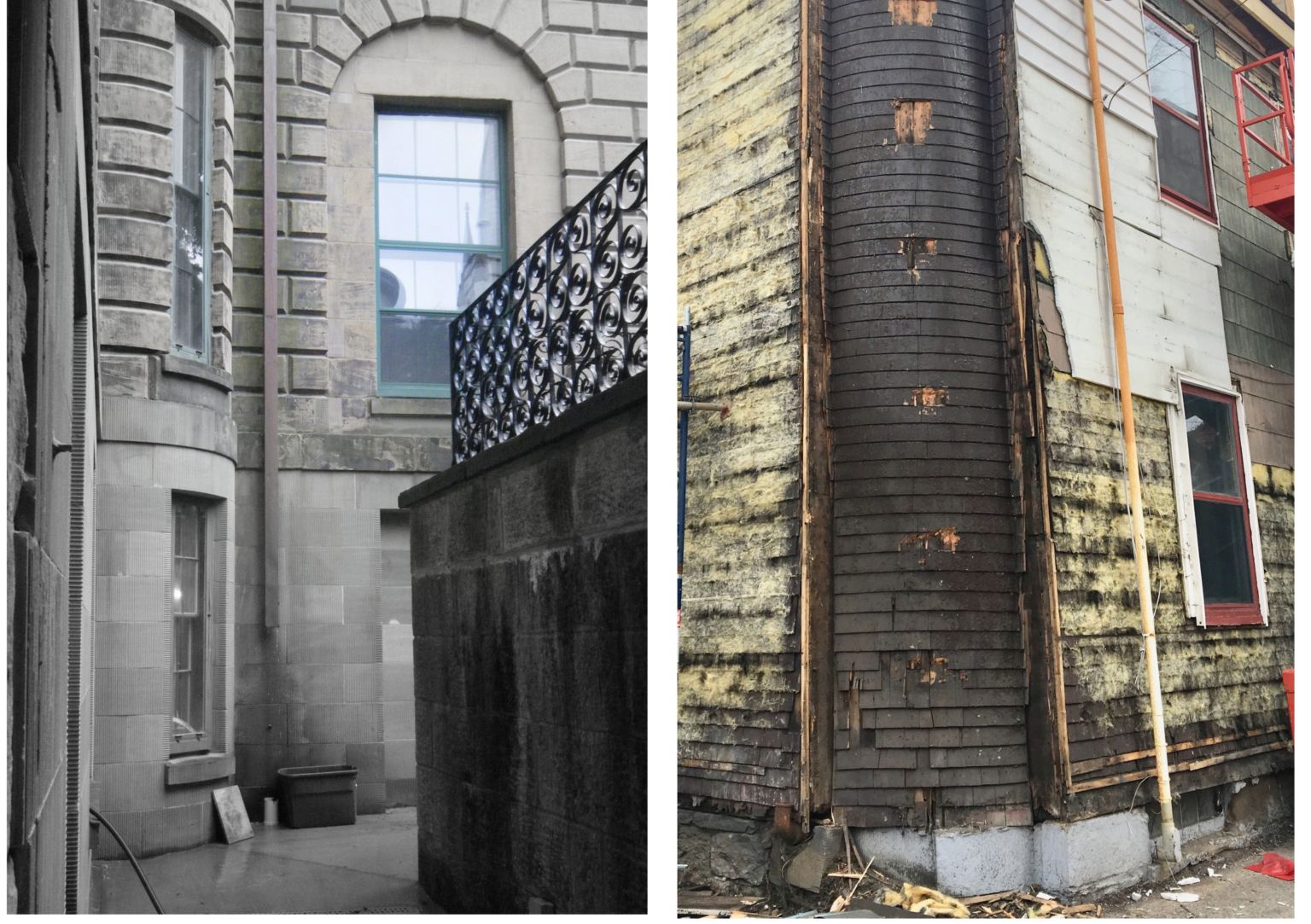