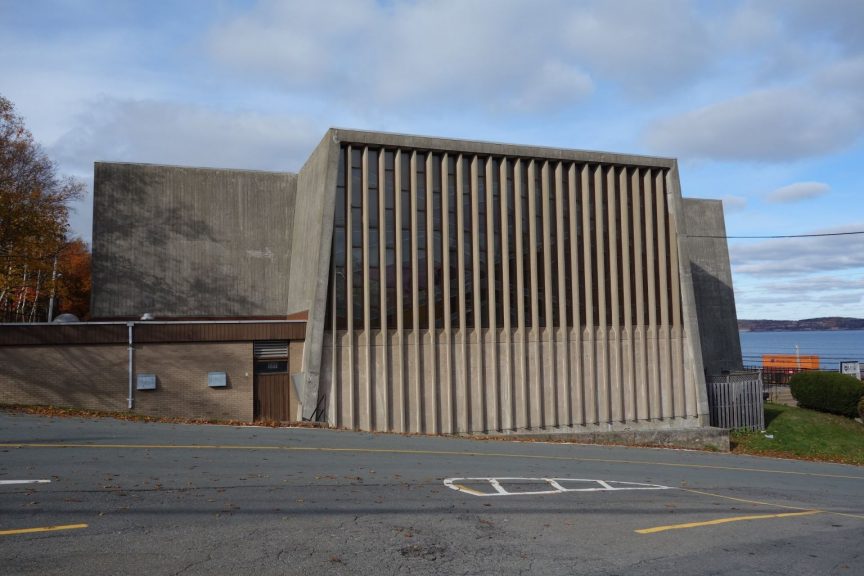 Halifax is not great at mourning old buildings that are knocked down, and is particularly unprepared to acknowledge the destruction of interesting structures that are not particularly ancient (i.e. younger than I am).

Recently I received this tweet about the demolition of the Christian Science Reading Room and the attached First Church of Christ, Scientist at the corner of Inglis and South Park Streets. The Reading Room had been a gem of a building; we can only hope that what comes next is as generous and thoughtful to people passing by on the street. 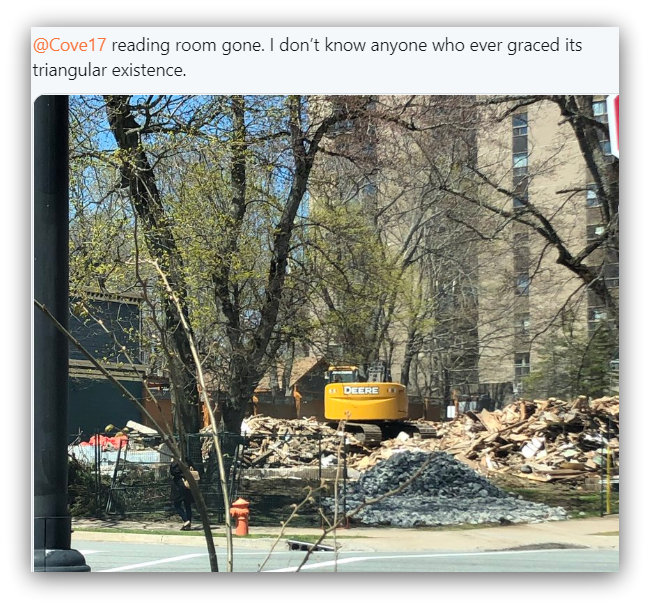 I took this photo in the 1980s, probably not too long after the Reading Room was built as a wing to a small nineteenth-century church. The Reading Room had a square footprint, but only half was enclosed. It appeared as if the structure had been sliced in half, with one side open to the air under a skeleton roof, while the slice through the enclosed part of the building was sealed with a wall of windows. 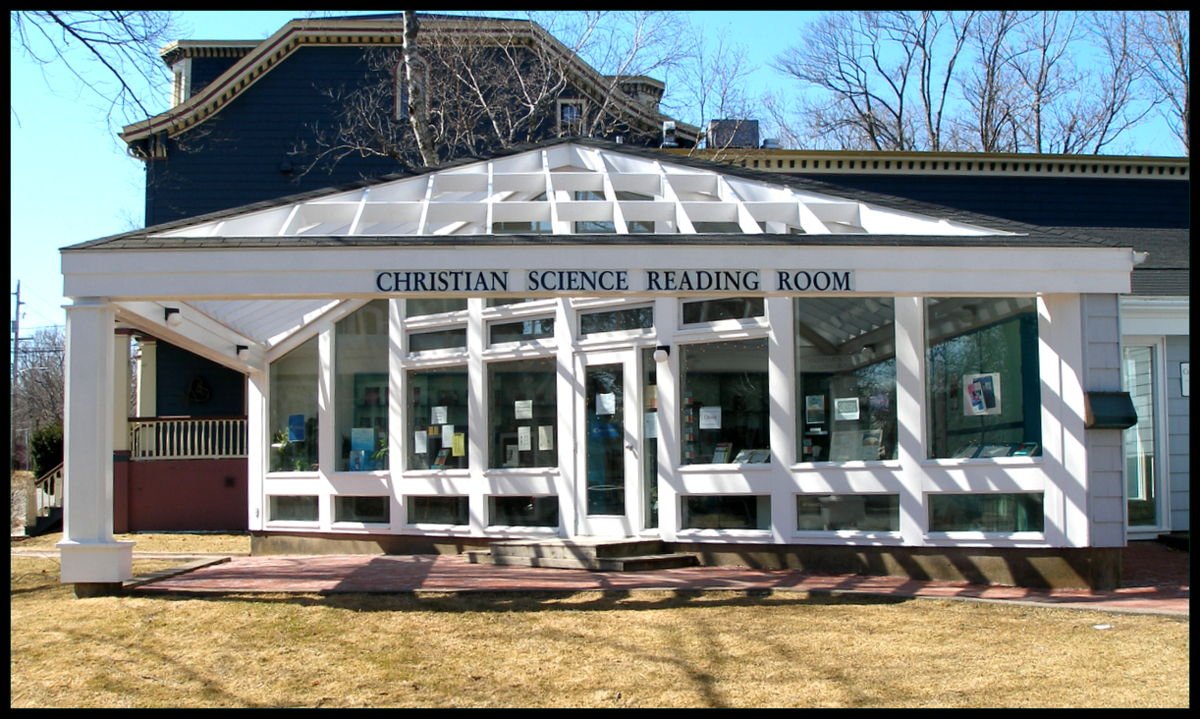 The skeleton section of building was removed several years ago and the remaining triangle looked untethered or perhaps surprised. 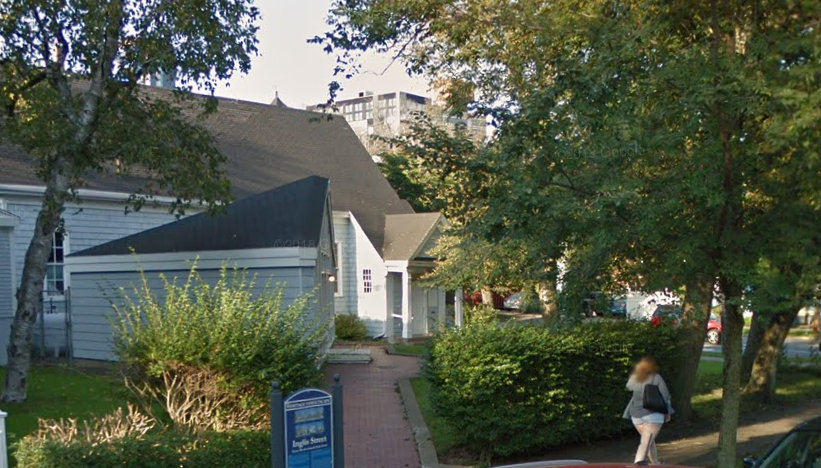 Many institutions with a corner lot would have erected a fence to keep people from taking a shortcut across their property. The Christian Scientists generously provided a charming brick sidewalk that saved several seconds a day for St. Mary’s University students, galloping to and from class. The time adds up over three or four years. 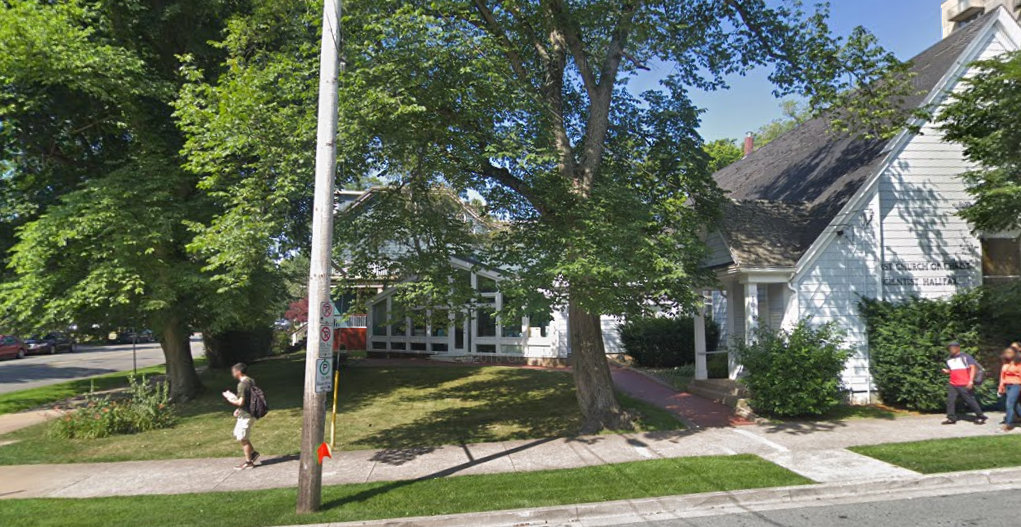 While the ghost structure was still there, people taking the path were metaphorically cutting through the Reading Room. The windows provided views into a comfortable, library-like space, encouraging folks to stop in and read the Christian Science Monitor. Don’t know anyone who ever did.

When it was built, the Reading Room felt very modern and clever, and remained one of the best examples of postmodern style of architecture to be found in Nova Scotia.

Just up Inglis Street on the edge of the St. Mary’s Campus was another distinctive church building, Canadian Martyrs. It was built in 1971, and I have been told that its many-sided roof always leaked. A couple of years ago it was demolished and now the site is covered with SMU landscaping and parking lots. 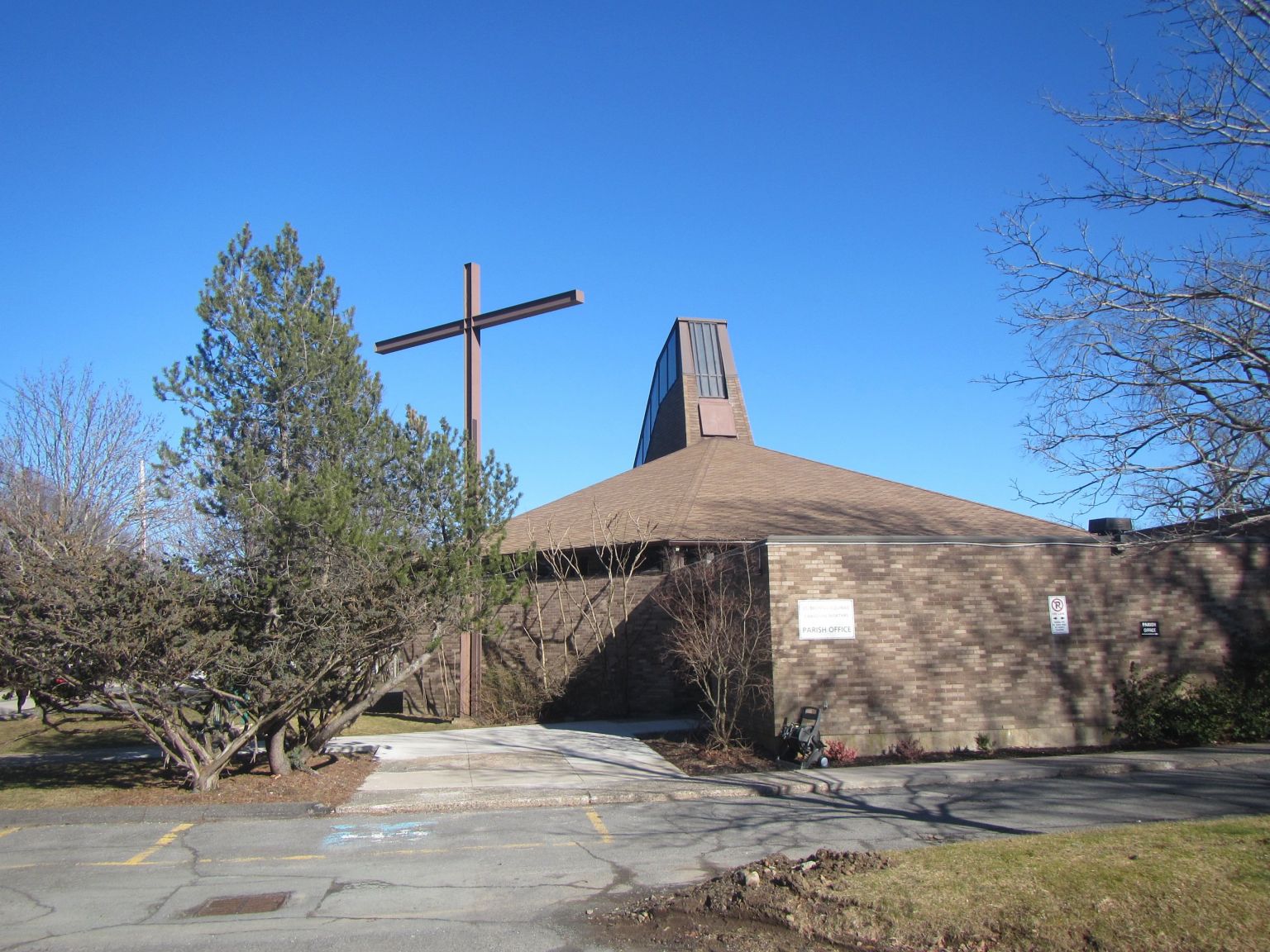 Many people thought the distinctive ridge on the roof suggested a Mohawk haircut and thus referenced the people who did the martyring. 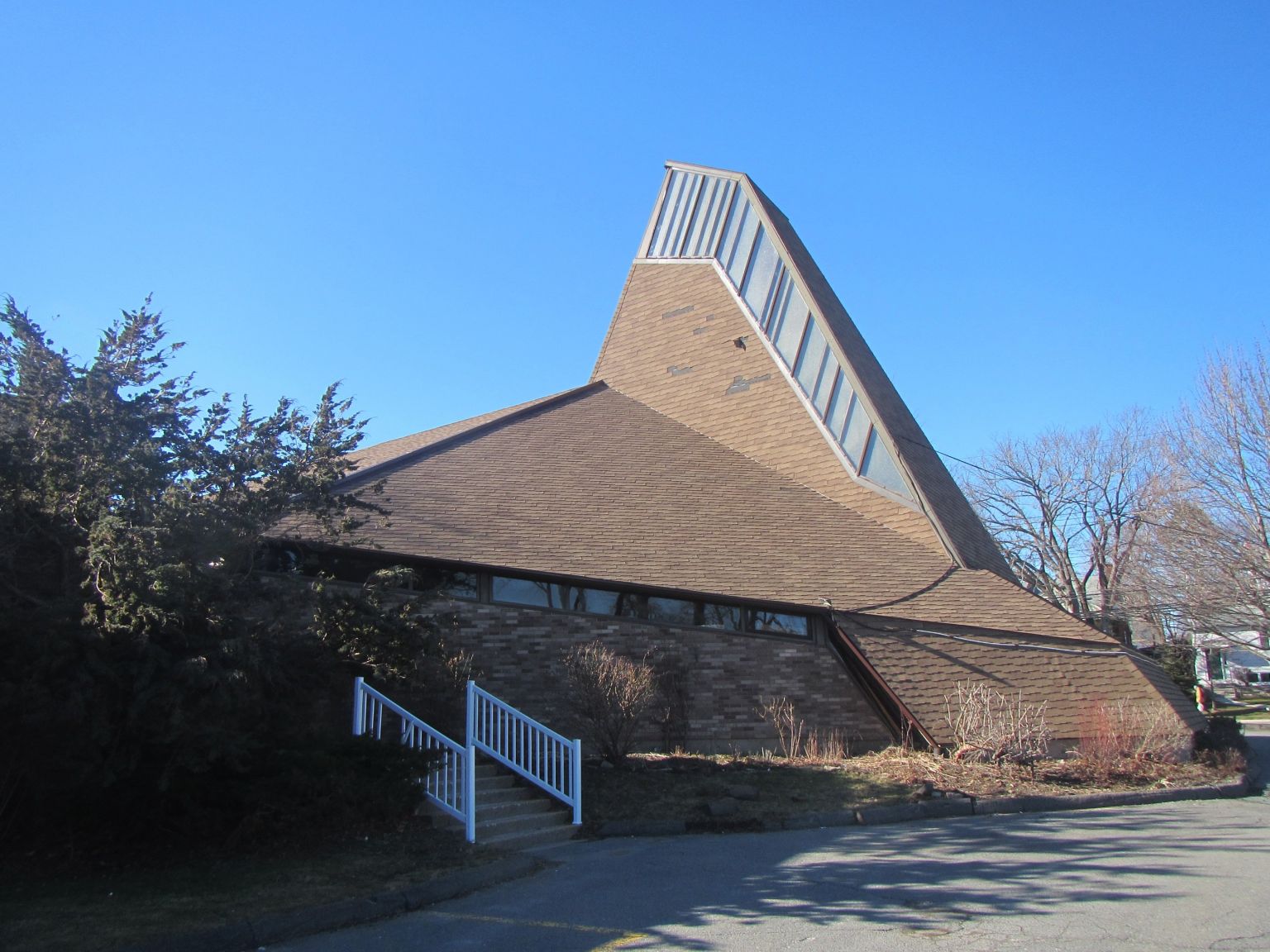 As time goes on, this modernist building will probably feel more exceptional. Hope you got inside.

Our Lady of Perpetual Help

Often when we visited the Art Gallery at Mount Saint Vincent University I’d look at the side of the church next door and think, I need to take a picture of the mural on the front that looks like a giant icon. It’s been too late for a number of years, first the mural was covered and now the whole building has been wrapped with a new skin. 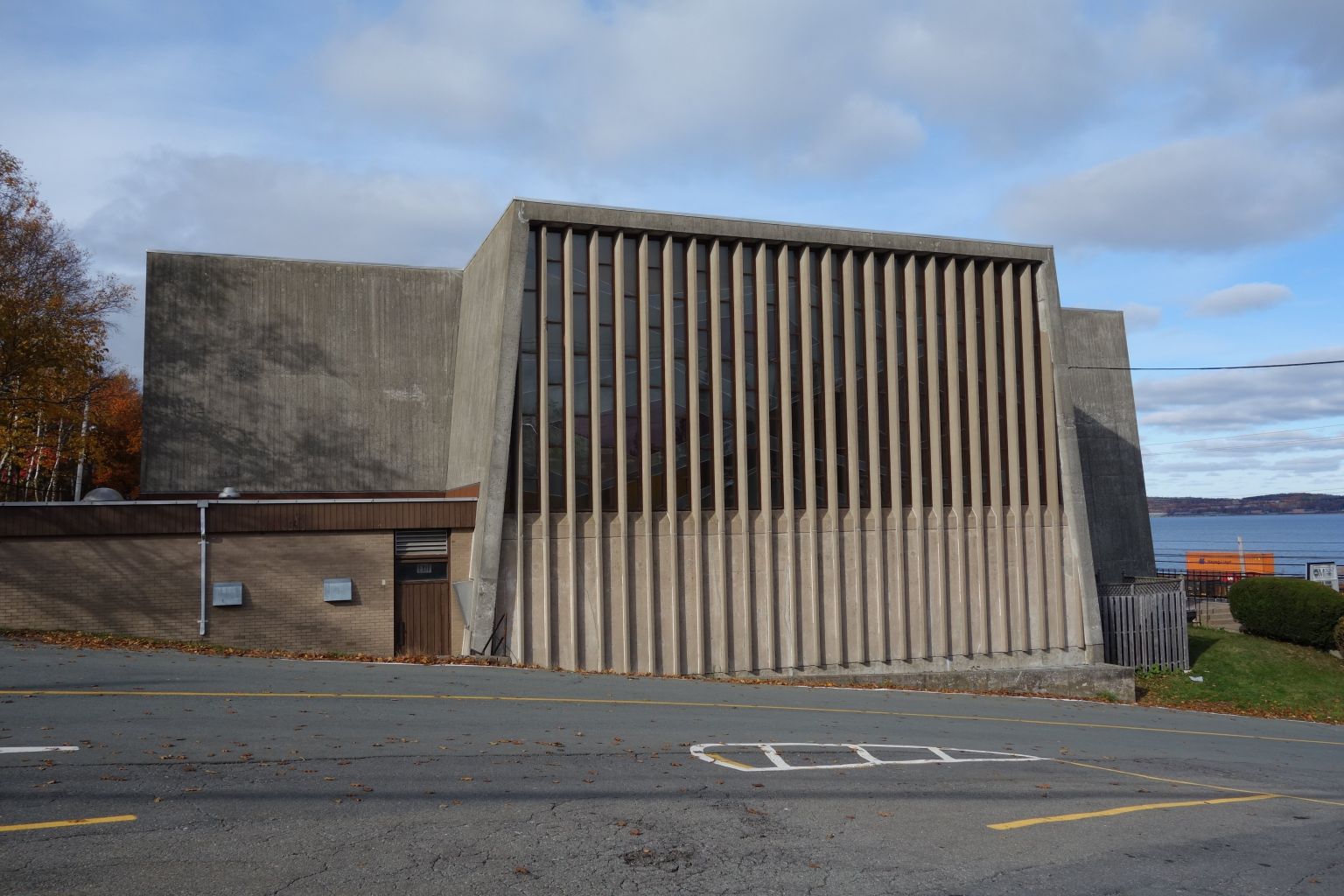 Our Lady of Perpetual Help  was a monumental concrete building overlooking Bedford Basin. The side that faced the Art Gallery parking lot had a wall of coloured glass that must have looked spectacular from the inside. This church was sold to the Mount and has undergone a total conversion to be the Centre for Applied Research in Human Health (sort of an update of Perpetual Help).

Imagine if the original grid pattern had been maintained on the new wall of blandness. Oh well. 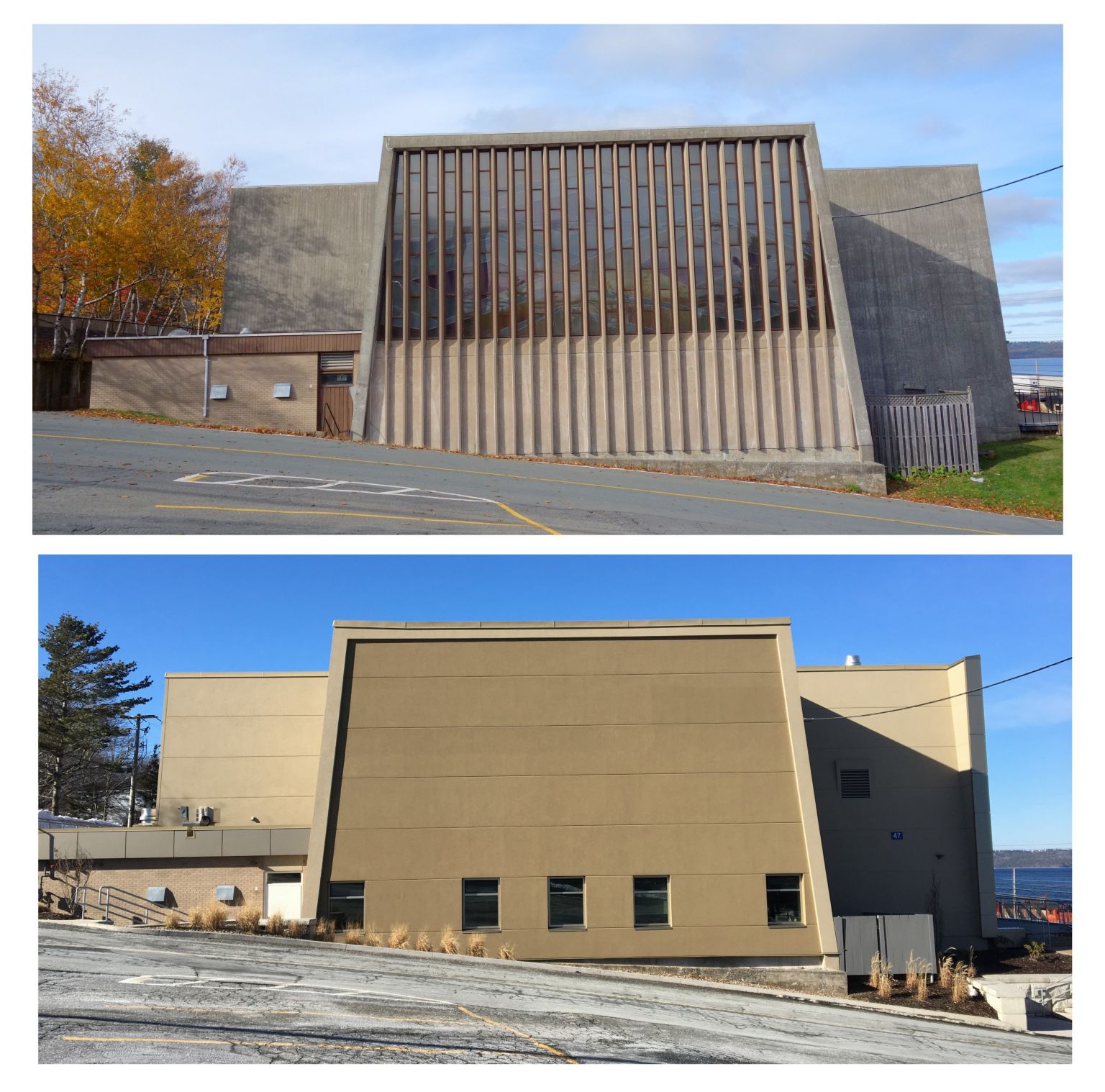 So What’s Your Point?

I don’t mind change and understand that buildings can lose their usefulness, and churches are particularly problematic. But here were fine, regional examples of three distinct architectural styles, postmodern, modernist, and brutalist. We should expect that when excellence is removed, it will be replaced with excellence. These days it feels like that is not working out for us.

I didn’t bother to go around to look at the front of the Centre for Applied Research in Human Health, but here is the conceptual drawing. In fifty years you get to decide if it passes the test of time. 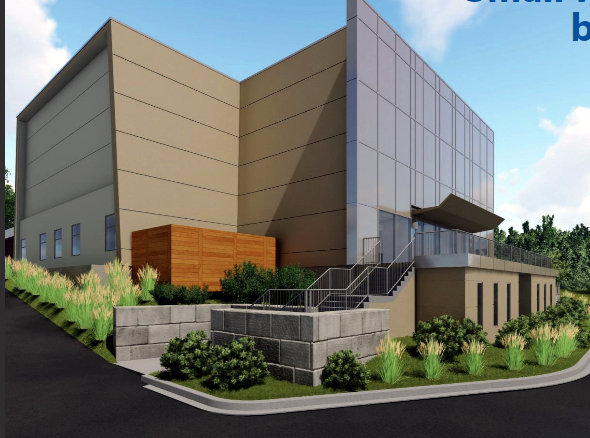 Here is another small example of how hard it is to get design right, or how our architectural heritage is being dumbed down. Adam Fine tweeted this picture of new gate posts to Admiralty House on Gottingen Street. 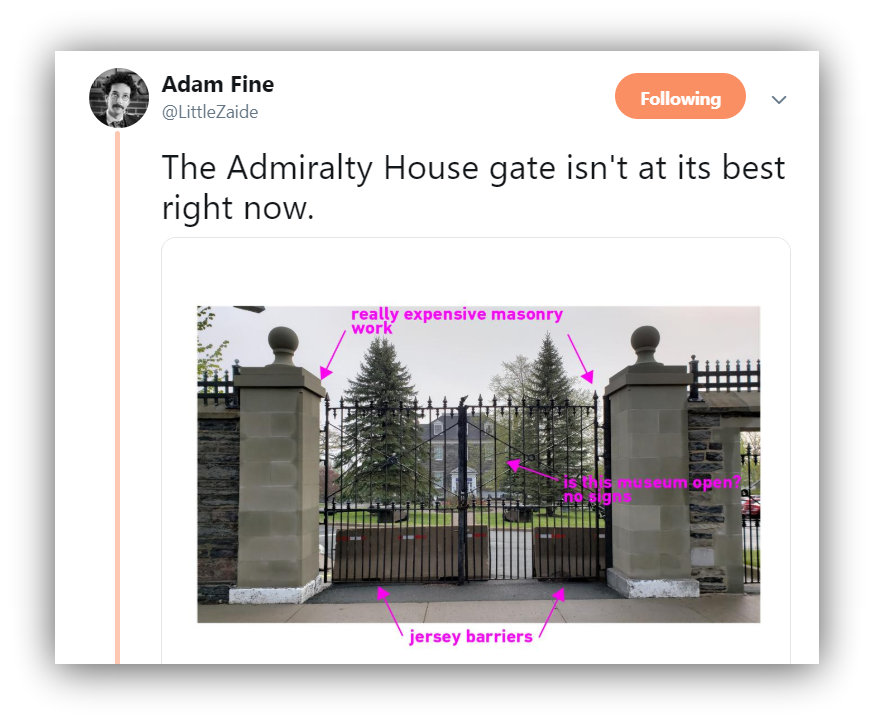 Here is my picture of the original gates, taken in the 1970s, but they have been there until recently. So undoubtedly the posts needed care and the new ones are made of excellent Nova Scotian sandstone, but why change the proportions and replace the elegant cap design and mouldings with mini balls on slabs. Makes the gate look silly. Like you would find outside a McMansion in the suburbs. Shudder. And who planted those trees; time to think of a trip to Boston. 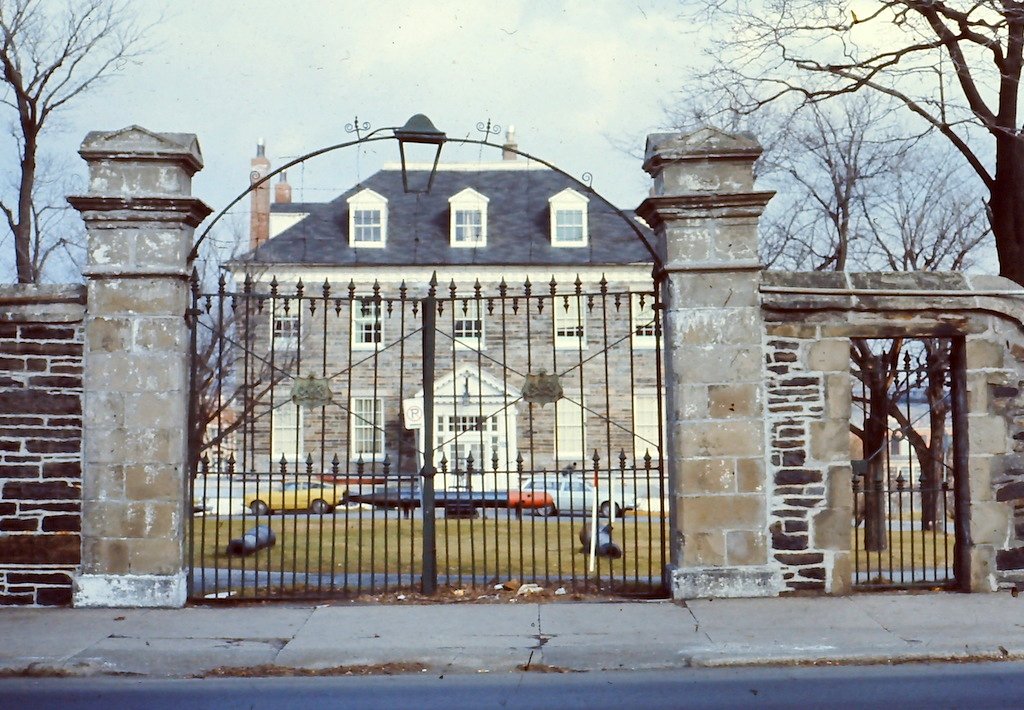 What is super sad and scary is the federal government has traditionally had very good architectural design and oversight. But besides this gatepost mistake, just down the block they have erected an exceptionally dreary new building behind another old gate. I wrote about that here.