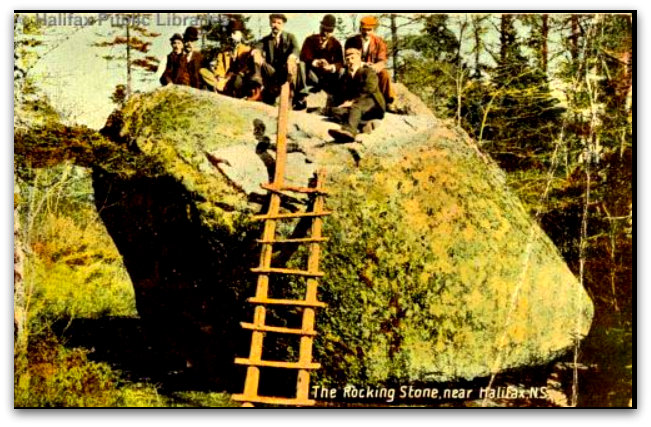 There was a time when most people in Halifax could look at the photo below and know exactly what was happening and where. Today, I’m guessing, not so much. It was taken on a Sunday afternoon in the spring of 1958, and that’s 11-year-old me in the centre, leaning on a pole with my older brother Malcolm. Our mother stands behind. And like little Archimedes with our first class lever, we are rocking the 200-ton granite boulder that looms, mostly off screen, to the left. 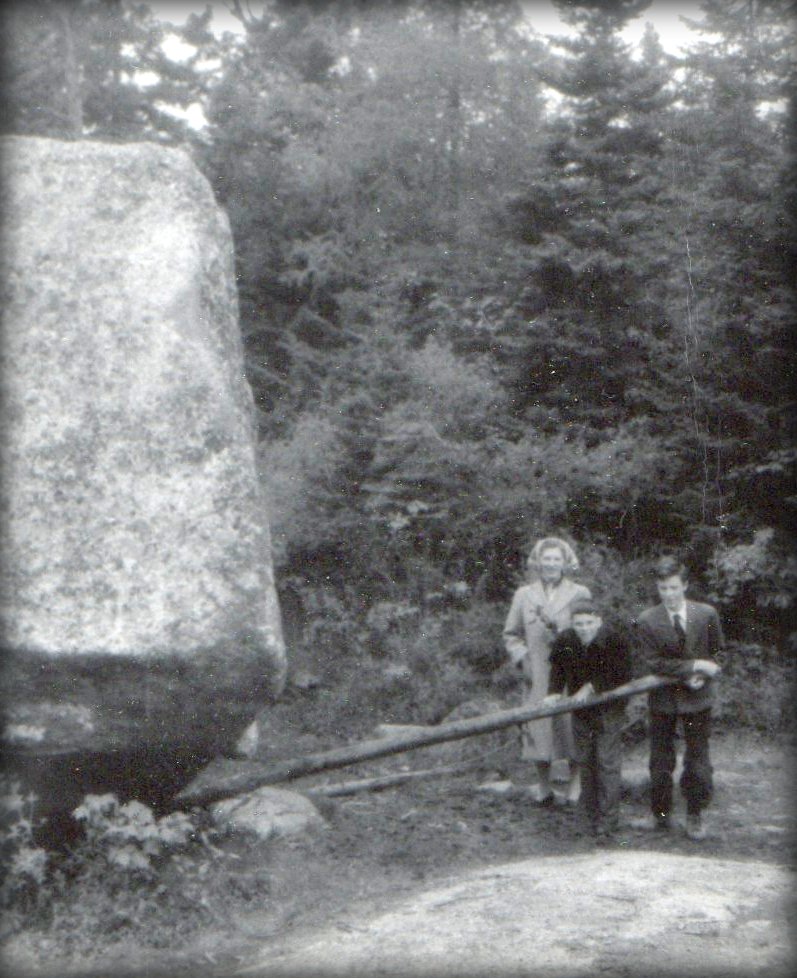 We were at the Rocking Stone in Spryfield, considered, in the 19th century, one of the foremost natural wonders in Nova Scotia. As such, it was often visited by people from the city seeking a gentle, swaying adventure while enjoying a picnic on top of the boulder. A visitor in 1823 gushed that the boulder was “truly astonishing, and clearly evidences the skill and power of an Almighty hand!” 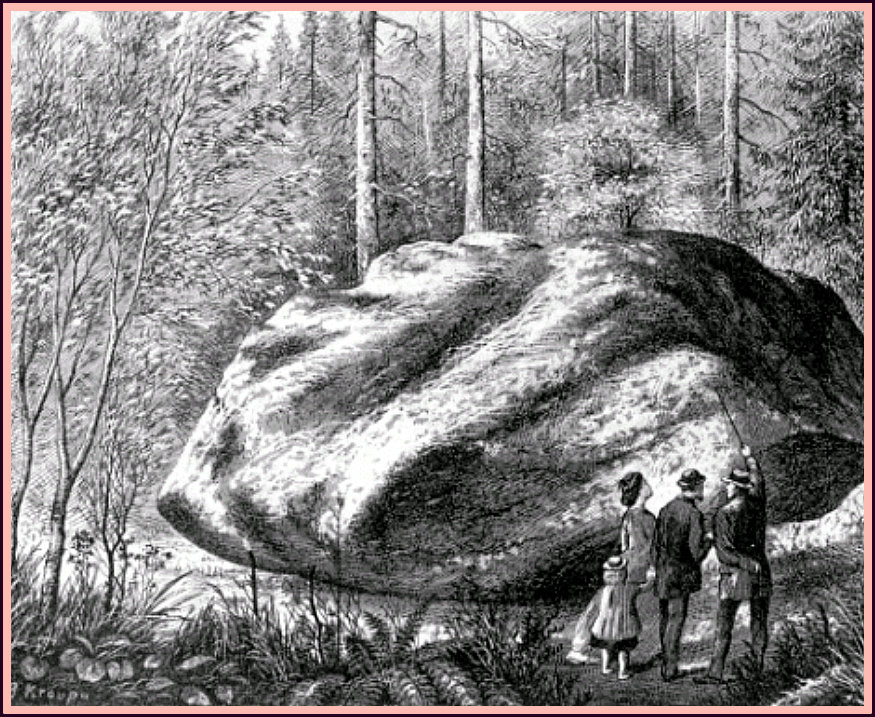 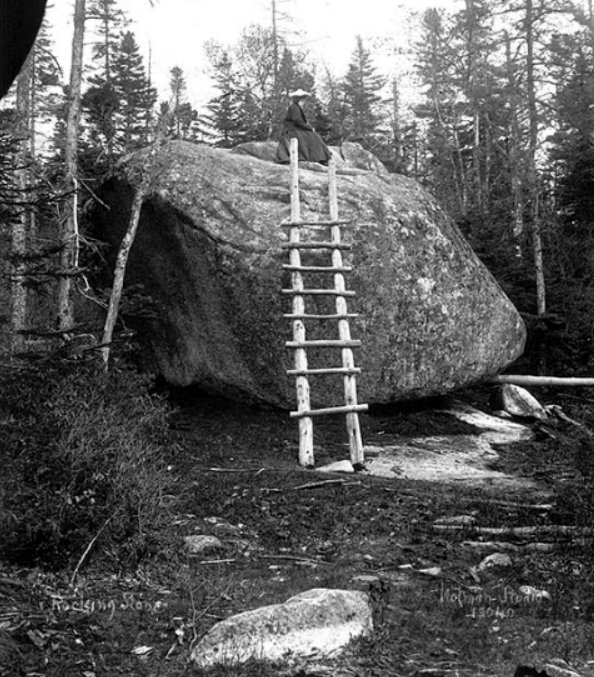 By the time Rev. David Honeyman, the first curator of the provincial museum, visited in the 1880s, it was understood that this was a glacial erratic, a stone transported by a glacier and randomly deposited when the ice melted. The boulder came to rest balanced on a point, and it has remained in this uneasy state for 12,000 years or so. Some said the rock was once so finely balanced that it moved in a strong wind. 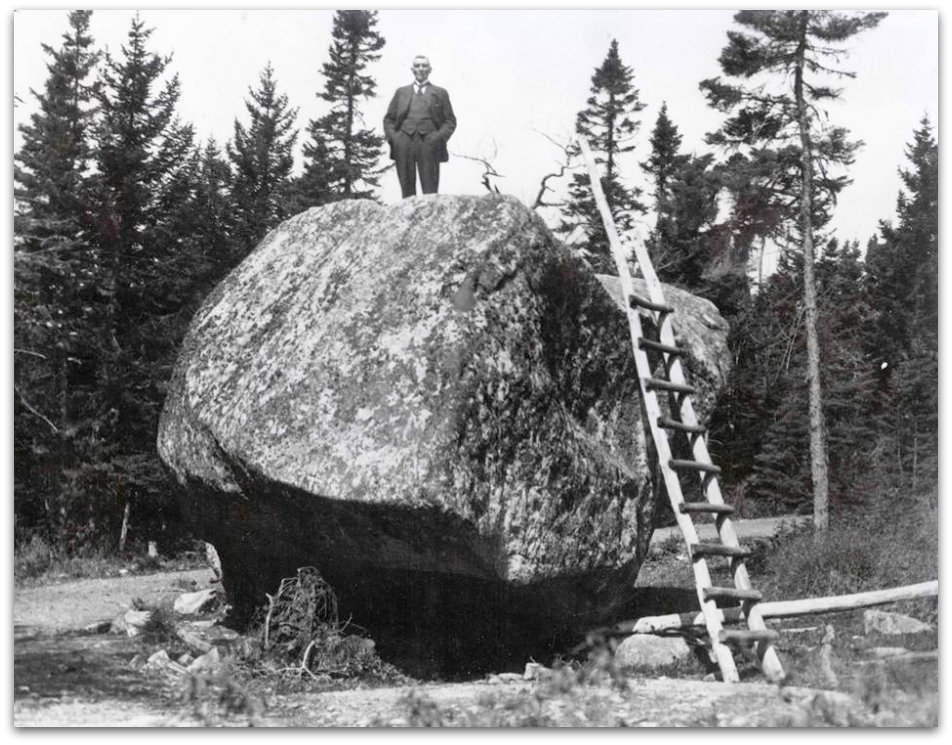 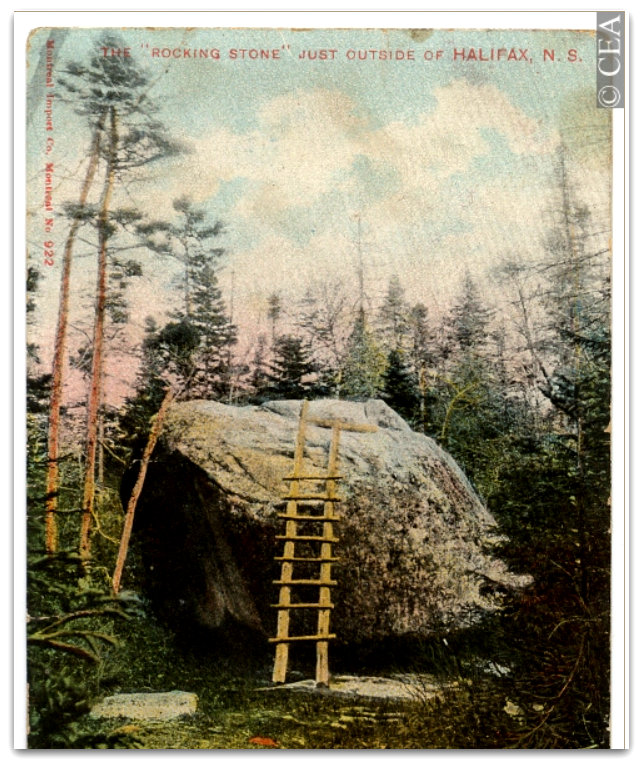 The Rev. Honeyman described the pleasure of his first encounter with the stone in almost too much detail:

I was astonished by its imposing appearance. Having reached its top by a ladder. . . I enjoyed a strange rock in this wonderful cradle. My conductor and companion, Simon D. MacDonald, F.G.S., seeing me seated on the top, went to the end of a lever. . . and commenced operations. The mass began to move, the motion increased and the rocking commenced and continued until I was satisfied. . . . The sun setting in the west, the scene was beautiful and romantic. 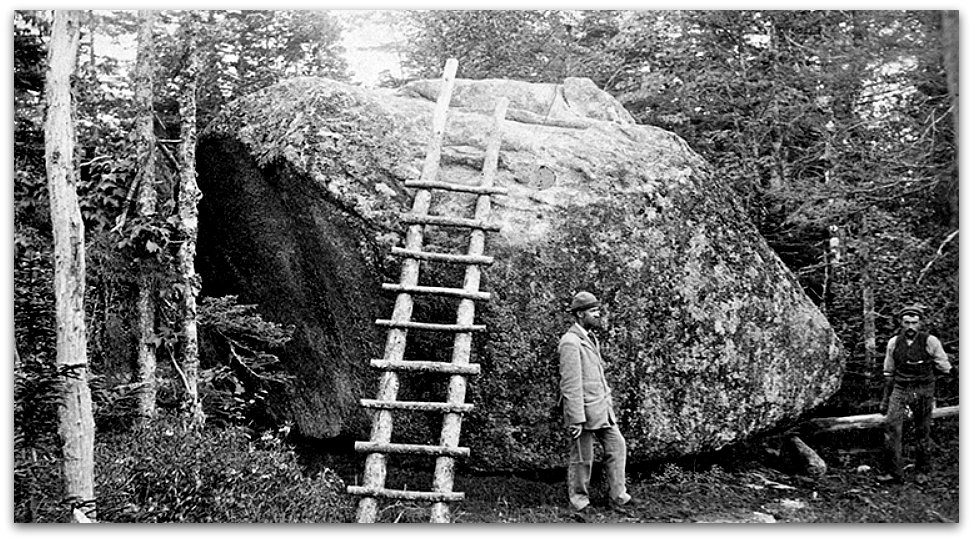 Recently I went to visit the boulder, which is in the city-managed Kidston Lake Park. What I assume is the Rocking Stone was surrounded by a sheet of ice. I wished it well and promised to return in warmer weather, maybe with a sandwich. 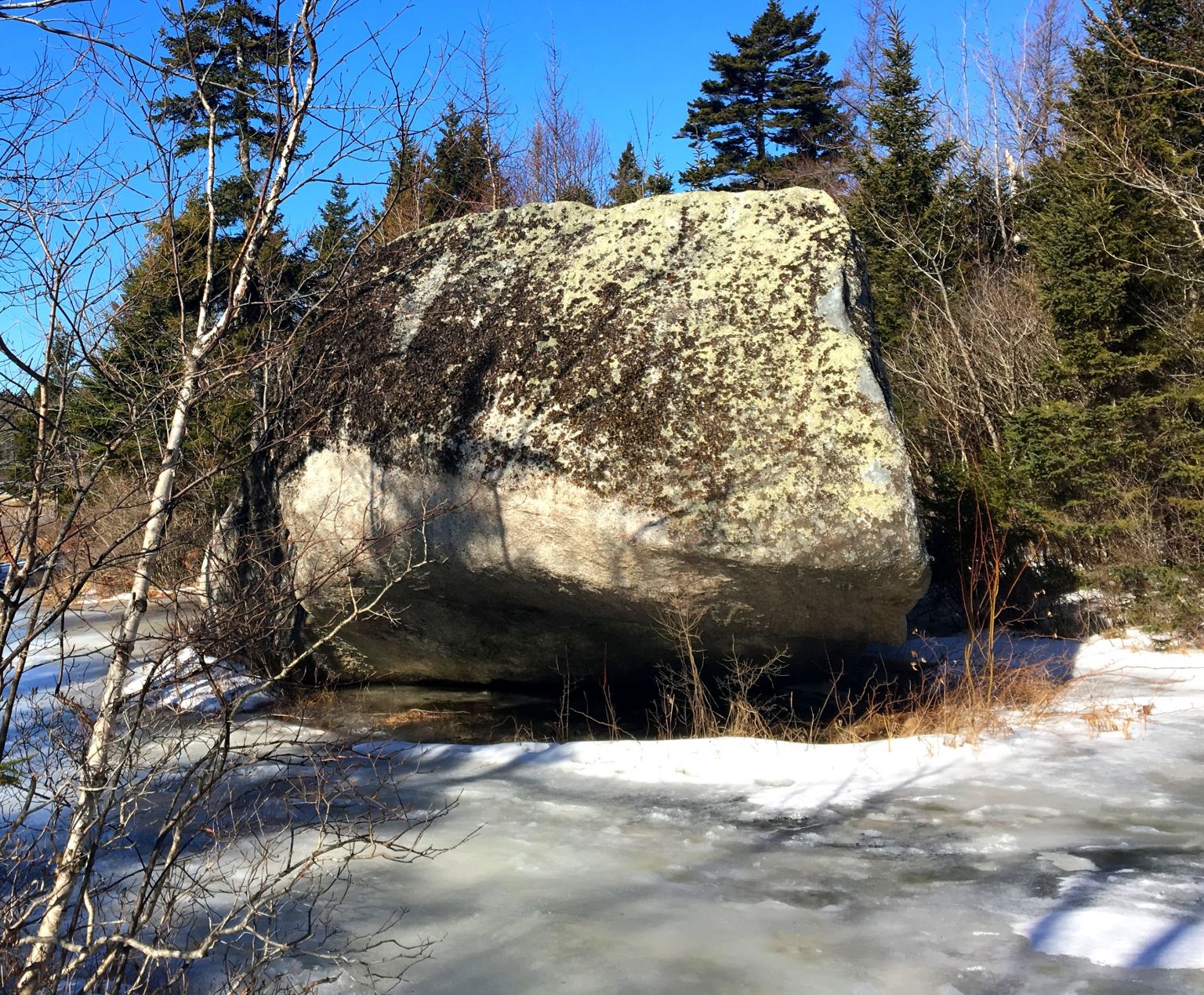 The Mainland South Heritage Society are keepers of the story of the Rocking Stone and you can find more on their Facebook. The stone has lost its ability to rock at various times over the years; I’ve seen soldiers, vandals, and over-enthusiastic rocking all blamed. Keeping a lever in place seems have been more of an issue in recent years. 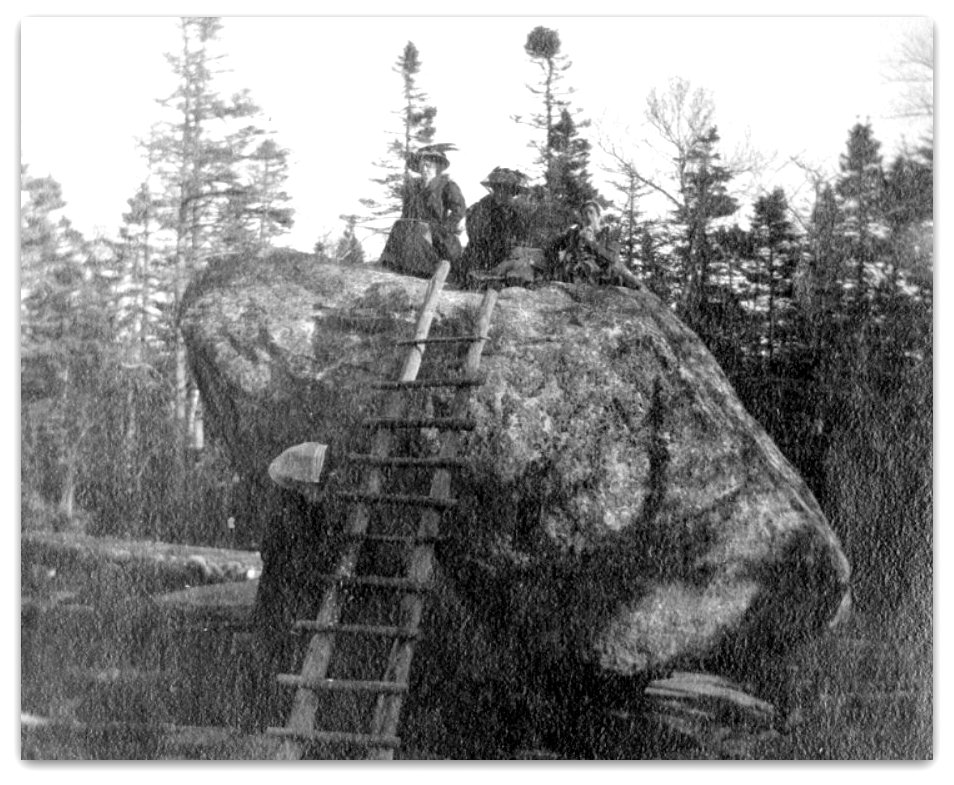 The Rocking Stone was just one of many attractions that brought people to the Northwest Arm in the 19th and early 20th centuries. A really popular destination was Andrew Downs’ Zoological Gardens that opened in 1847 on a site now located just up Joe Howe Drive from the Roundabout. This was a big deal (described as the first zoo in North America); think a polar bear, monkeys and seals among hundreds of critters on display. Until 14 April 2019 at the Dalhousie Art Gallery, you can see how artist D’Arcy Wilson has explored Andrew Downs and his zoo as a starting point to engage with our relationship with the natural world. The show is called The Memorialist. Come prepared to be challenged. 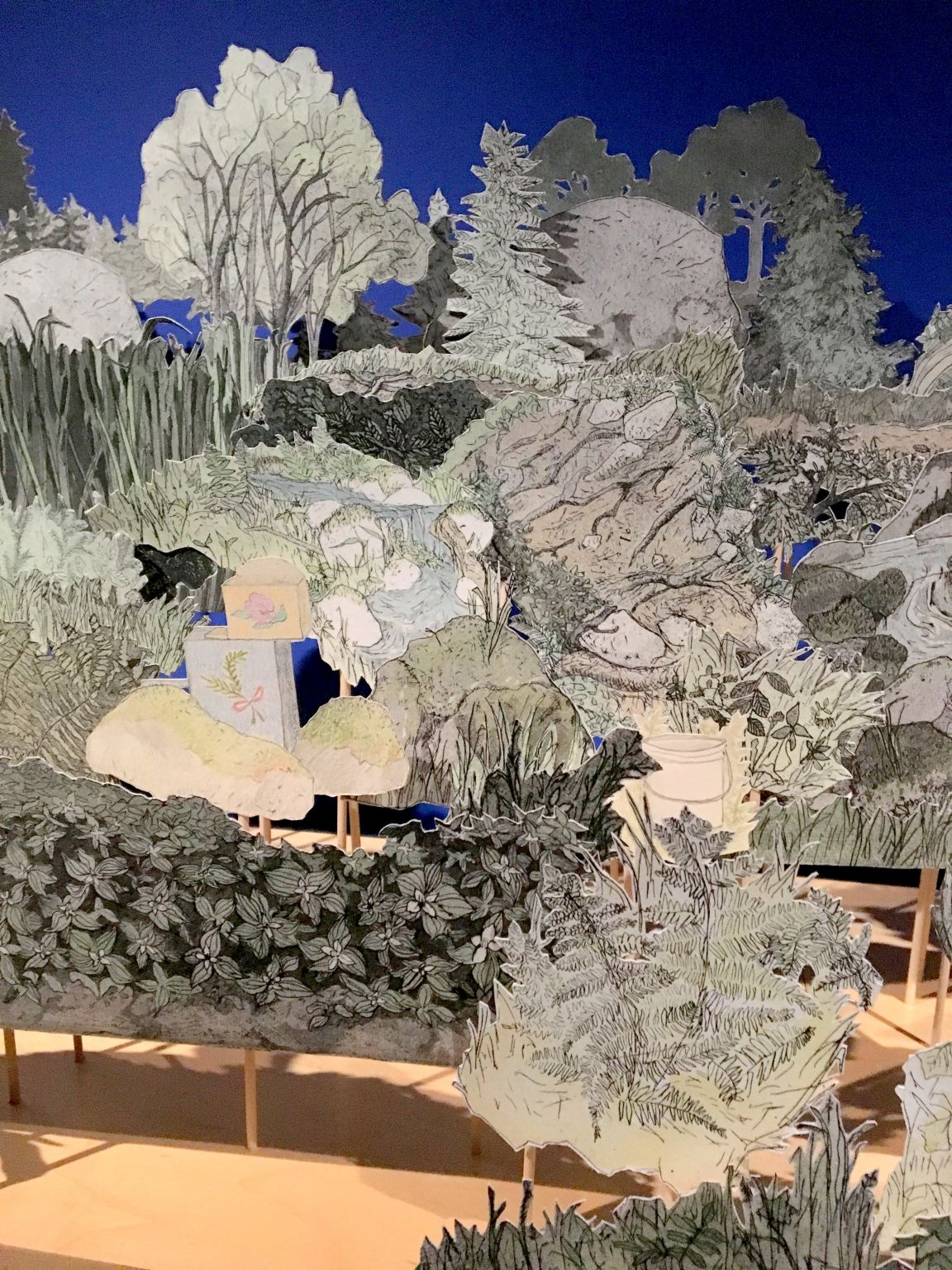 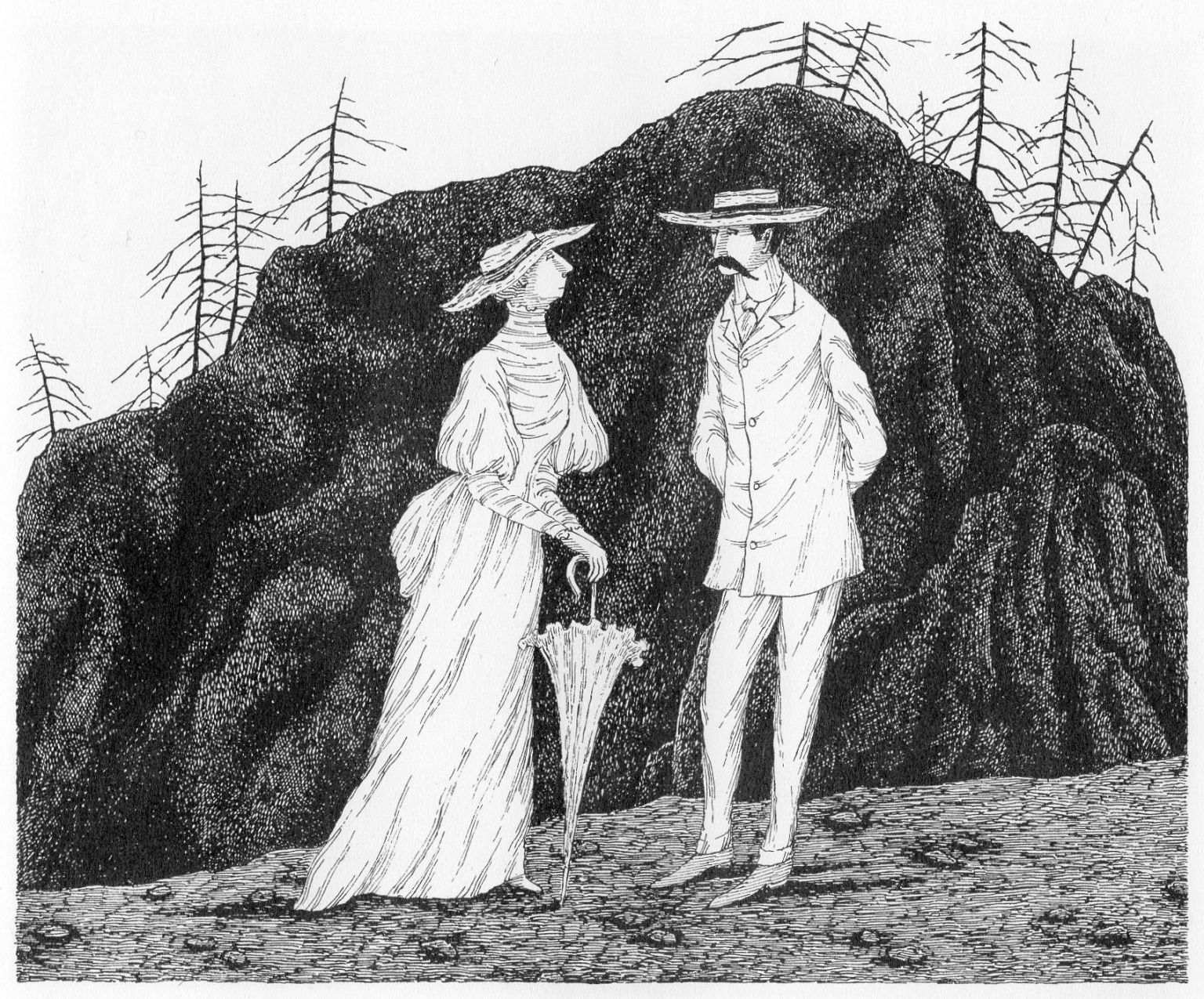 From “The Secrets: Volume One. The Other Statue”

Gorey suggested a boulder could be used to do in someone instantaneously. He contrasted this with the gradual approach of feeding the victim 35 arsenical buns. 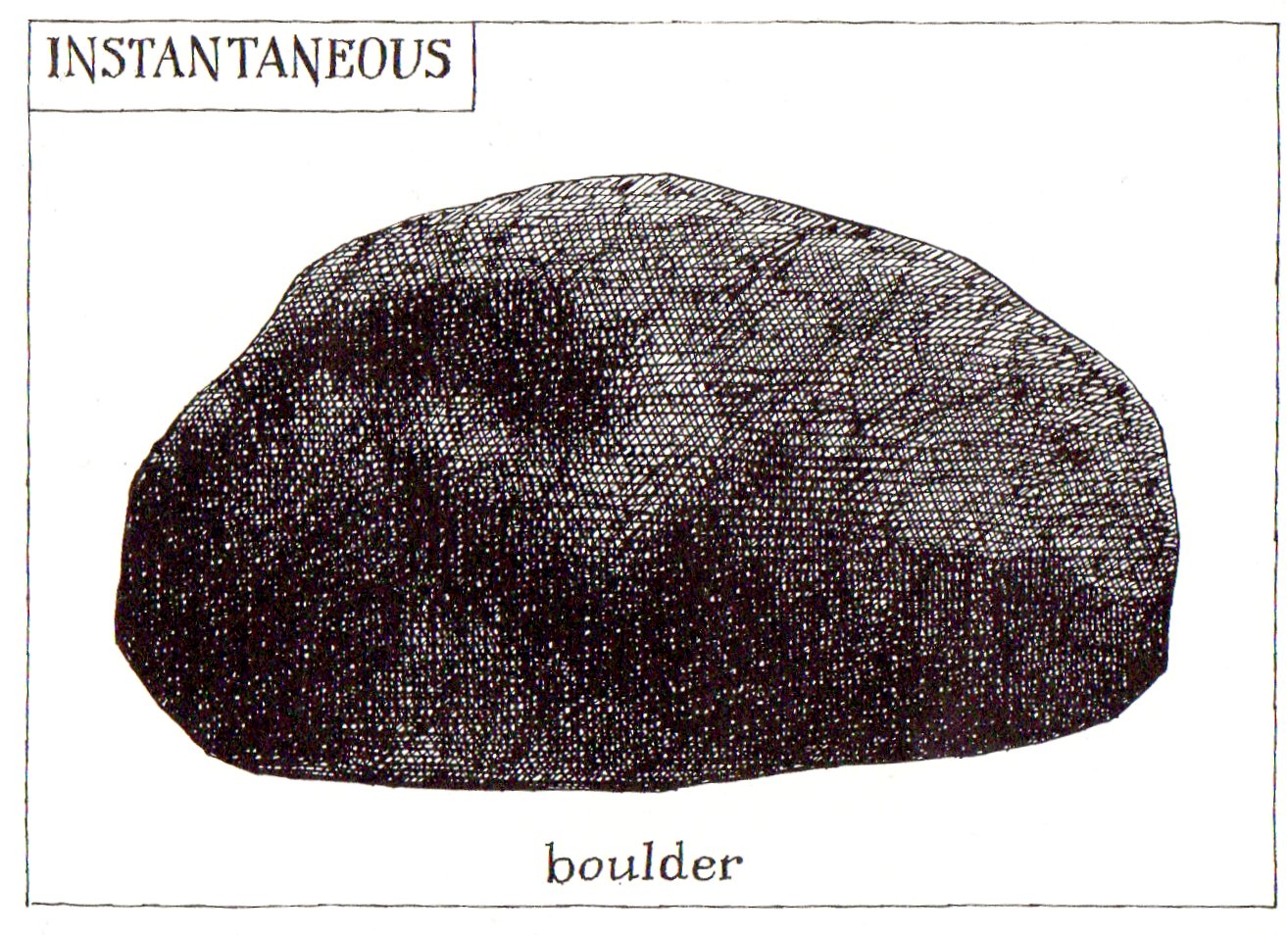 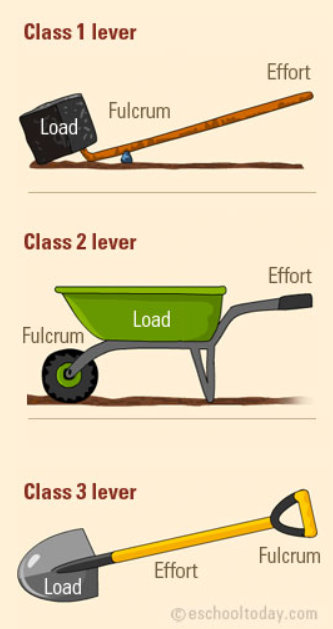