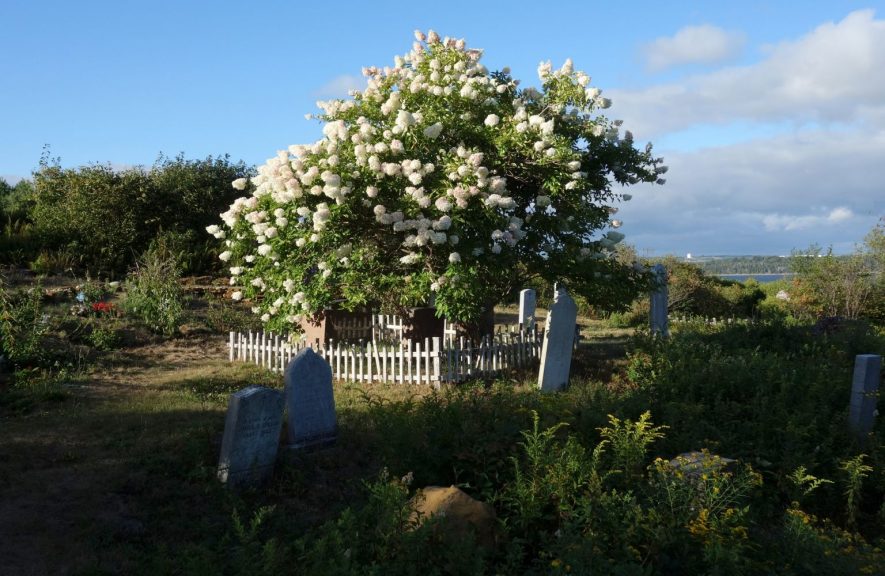 When we decided to buy our house, 25 years ago, one of the reasons was the harbour view framed by an overgrown cemetery across the road. See a few stones poking through the vegetation? That’s the old refinery area of Dartmouth on the other shore. 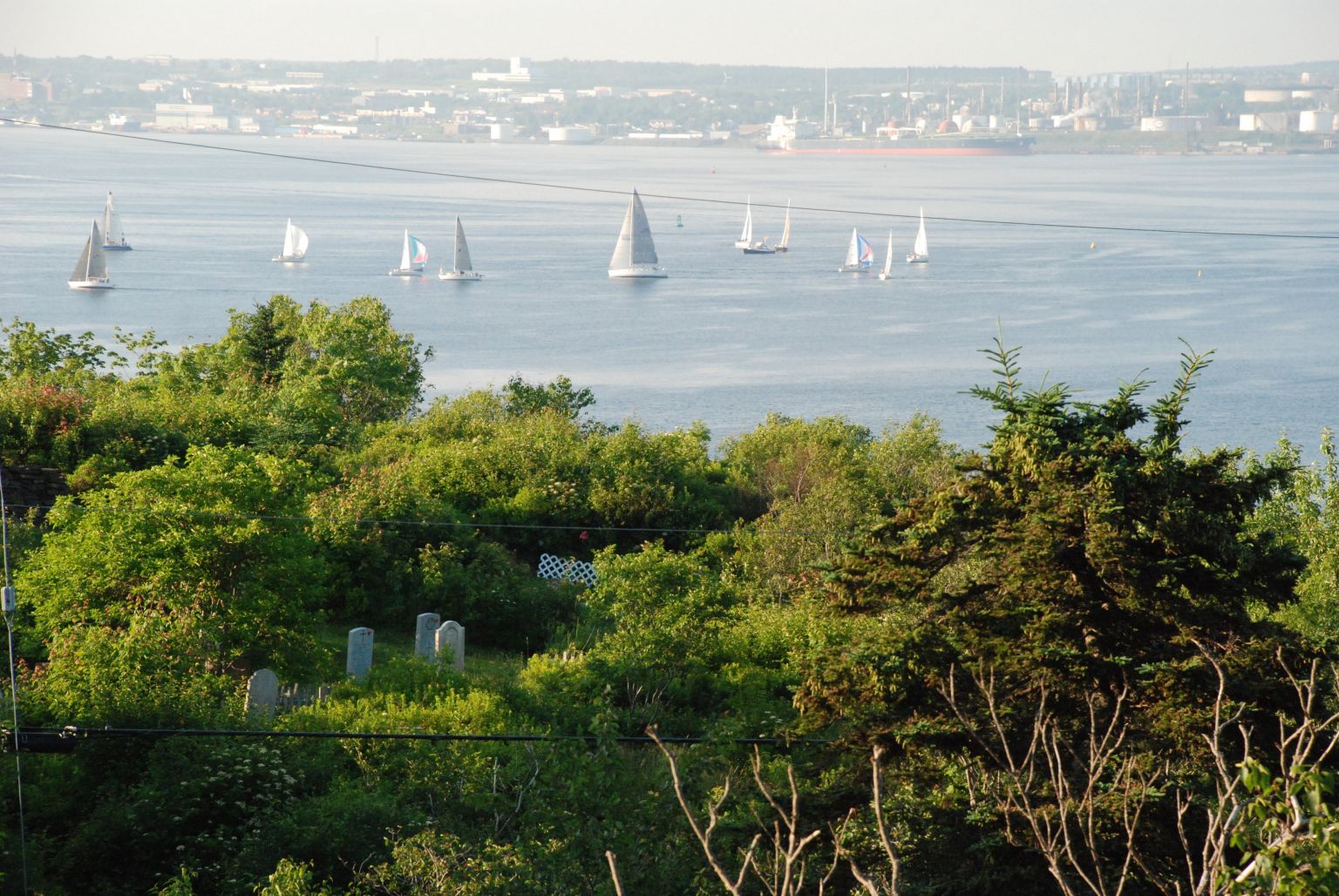 And just over to the left is the container port. 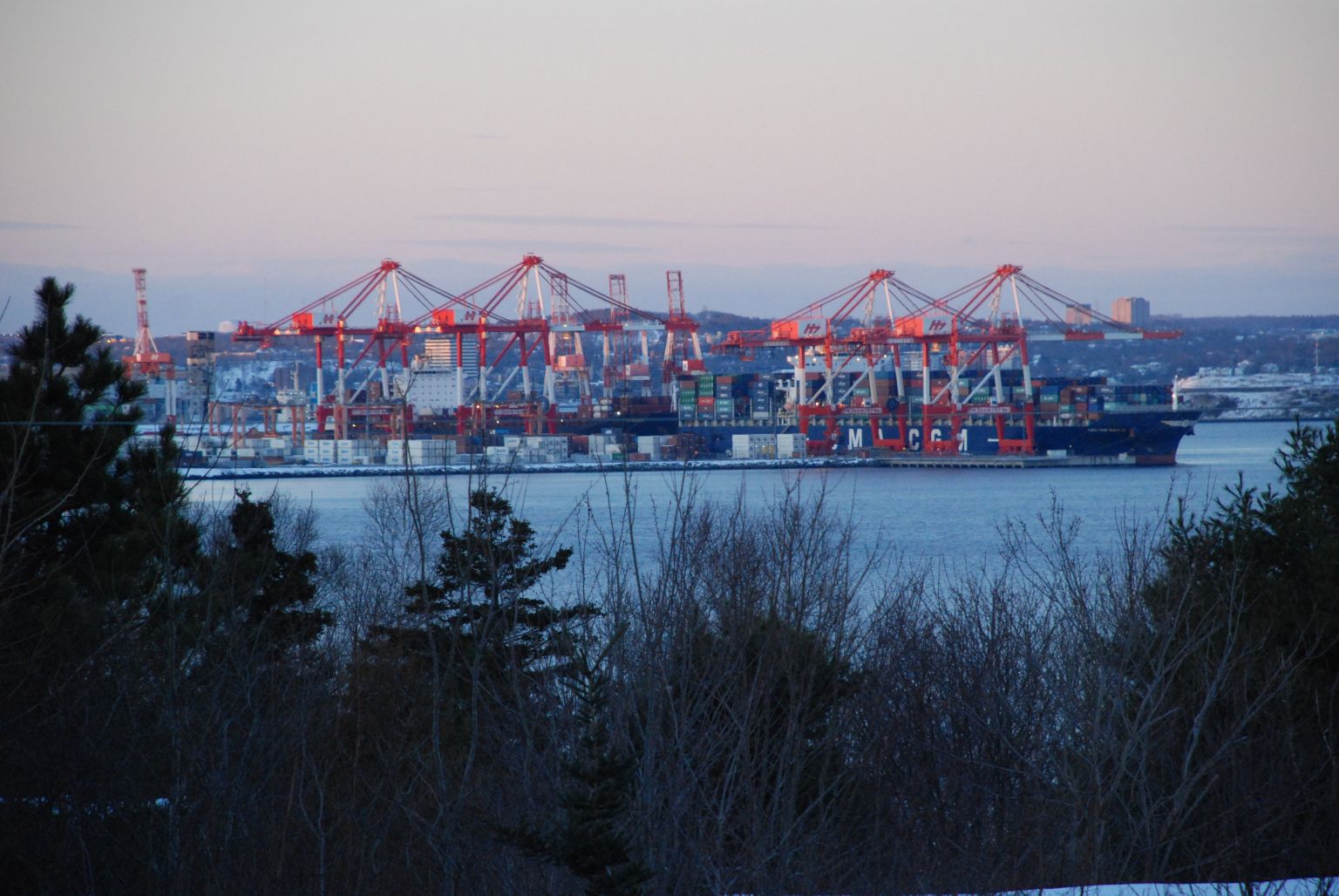 The cemetery has served the communities of Ferguson’s Cove, Purcell’s Cove and surrounding area, probably since the early 1800s. This painting shows the humble fishing community of Ferguson’s Cove (or Falkland Village as it was called for a while) in 1846, with its new Anglican church. Nets are hung to dry beyond the wharves, and small fields are outlined with fieldstone walls. The cemetery is off screen to the left and probably at a slightly higher elevation than the church. 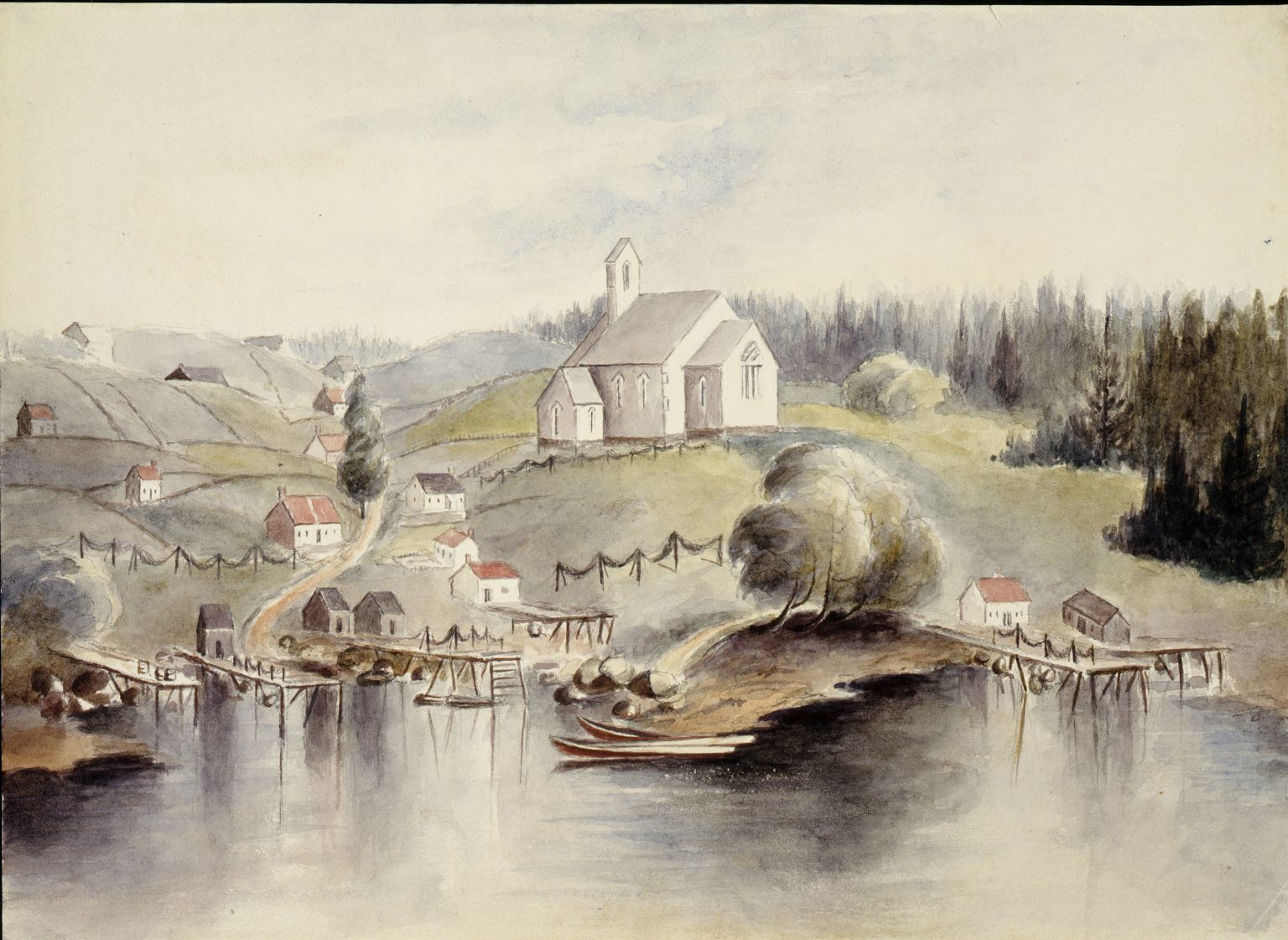 Devil’s Hill Road winds its way up the hill and on to Spryfield. National Archives of Canada, Lady Falkland Album, C-105119

Here is what a stone wall on the harbour side of the cemetery looks like today. 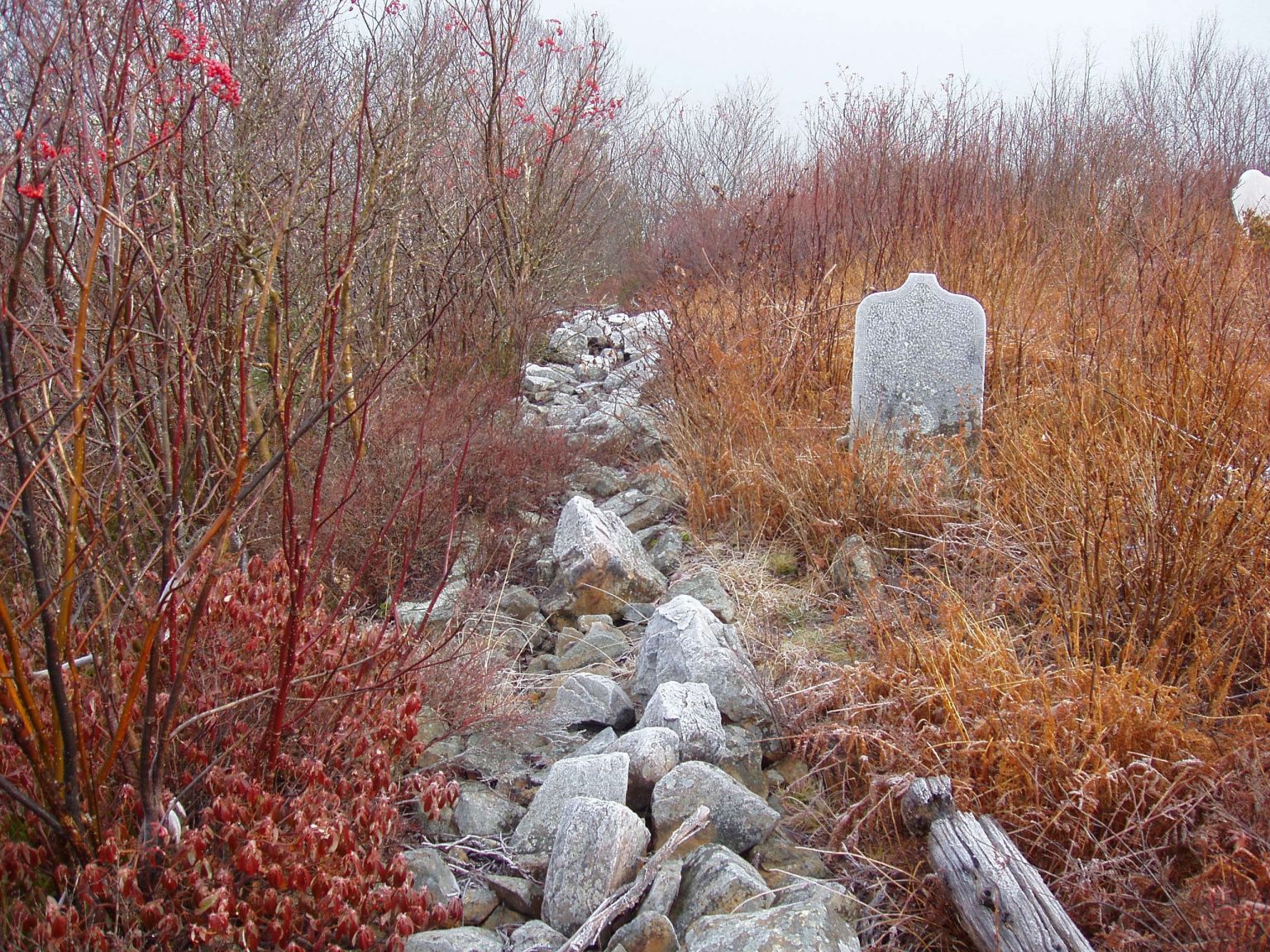 The cemetery contains both Protestant and Catholic burials. This apparently reflects the changing composition of the community that started out Church of England and gradually became more Roman Catholic.

In the 1990s there was a tall wooden cross, and a number of plots were defined by low wooden fences. Decay has since taken all of these away.

The whole site used to be quite overgrown but in the last few years individual families have put a large amount of effort into re-landscaping their own plots and the newer part of the cemetery in general. 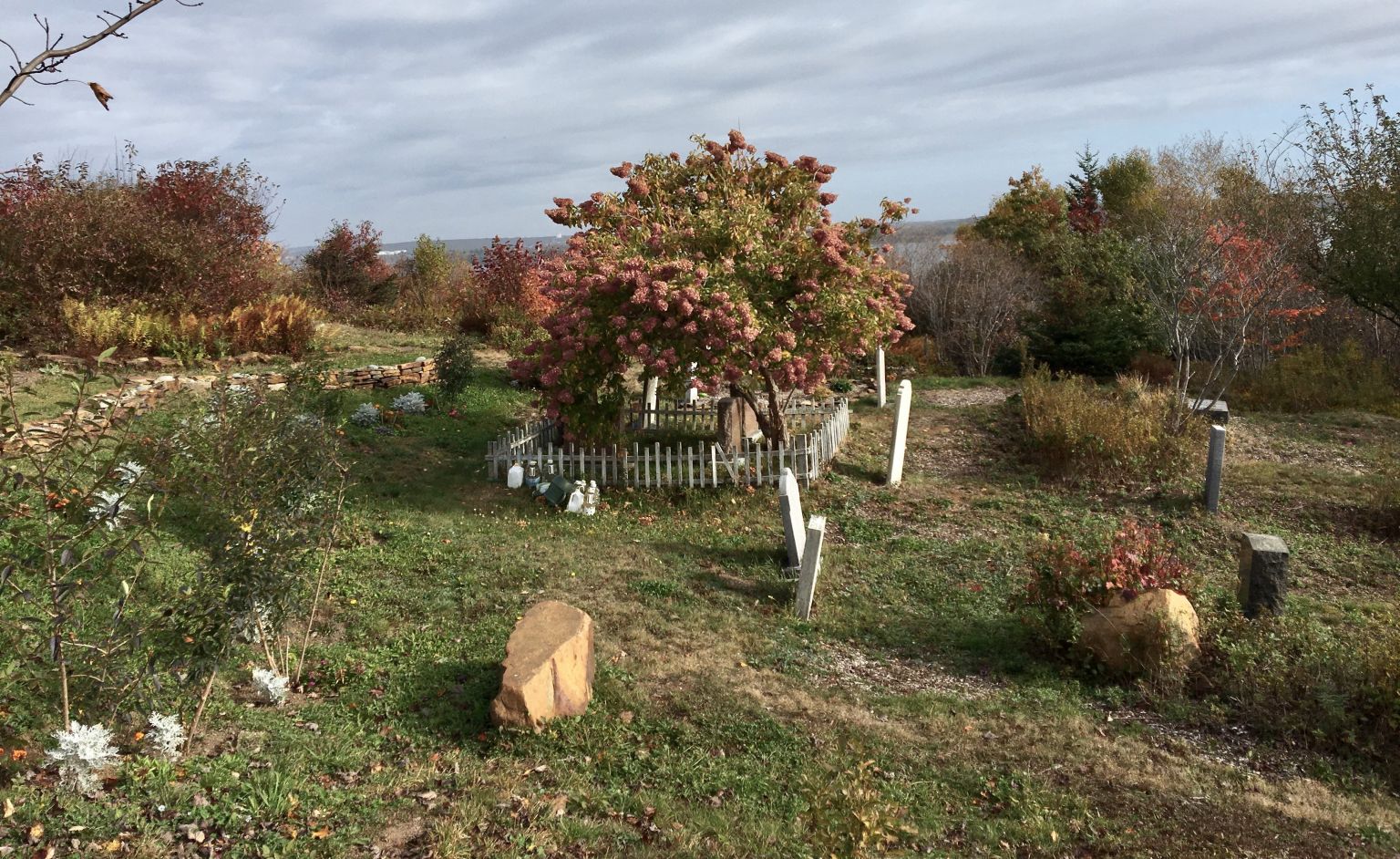 Every couple of years, members of the Purcell’s Cove Social Club spend a morning clearing brush. 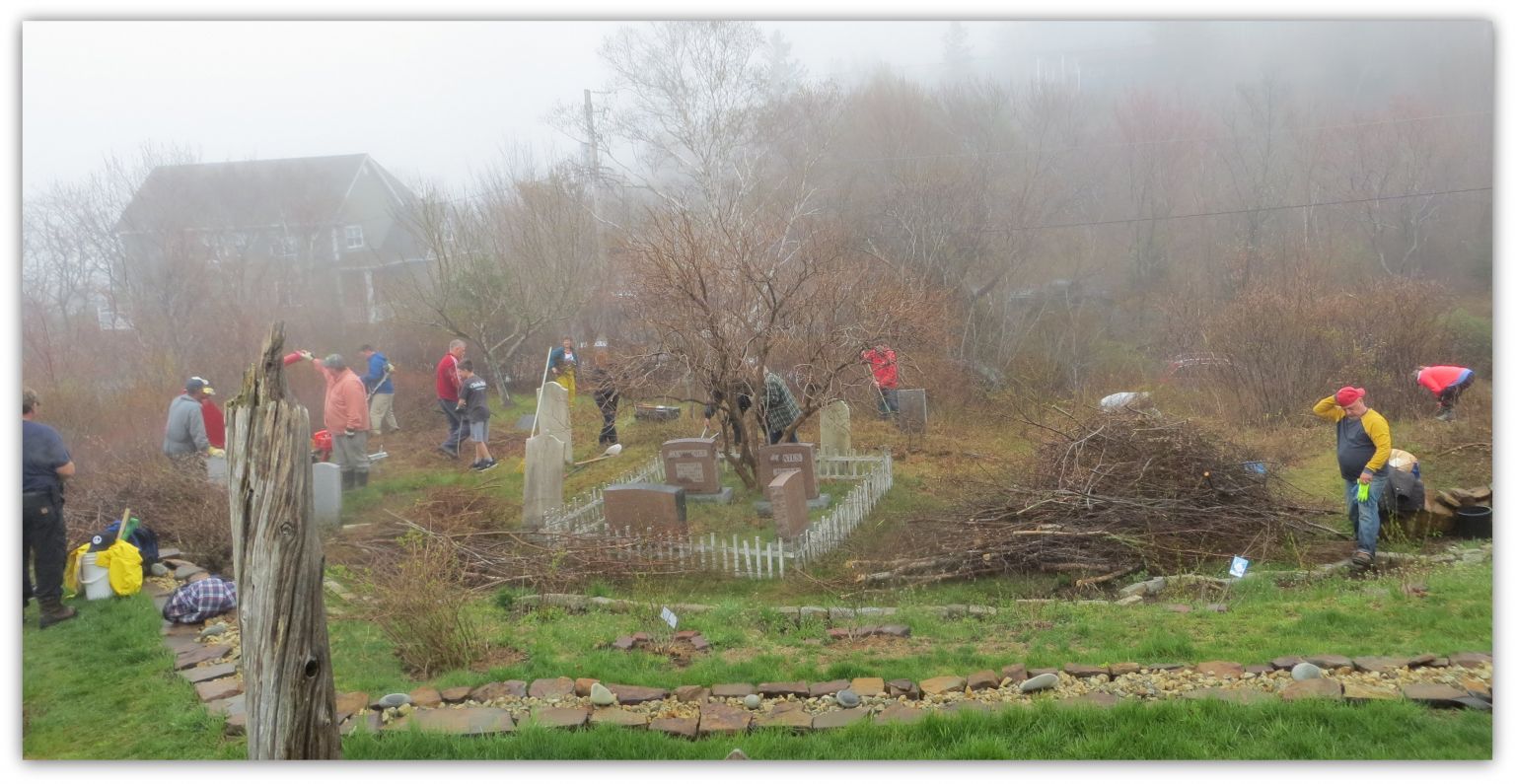 Here a few folks are engaged in getting a chipper back in operation (a scene worthy of a Norman Rockwell illustration). 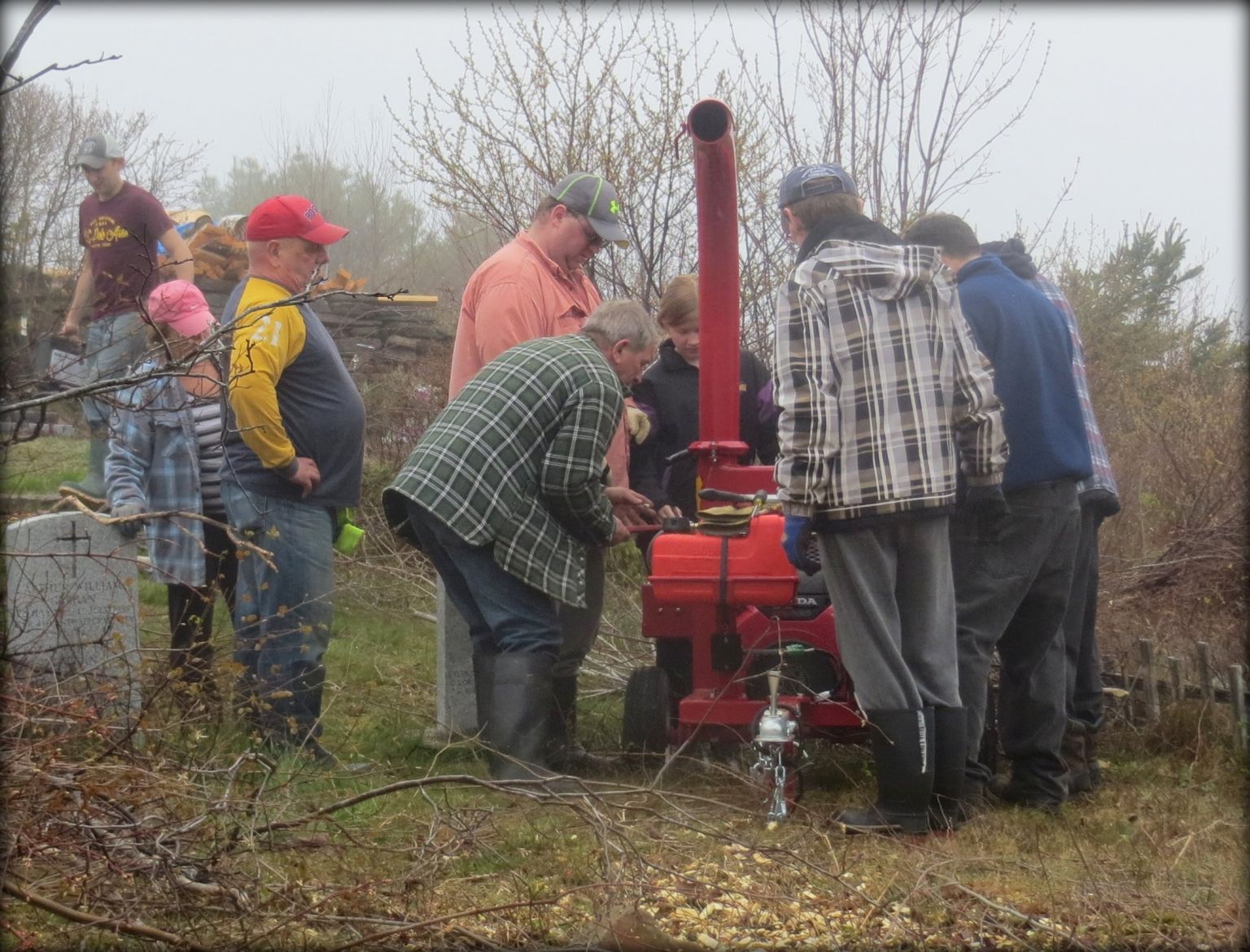 In the years before there was much active maintenance of the cemetery, a couple of neighbours would take on projects that appealed to them. I did some pruning on an old apple tree, and encouraged the surrounding patch of lily of the valley. 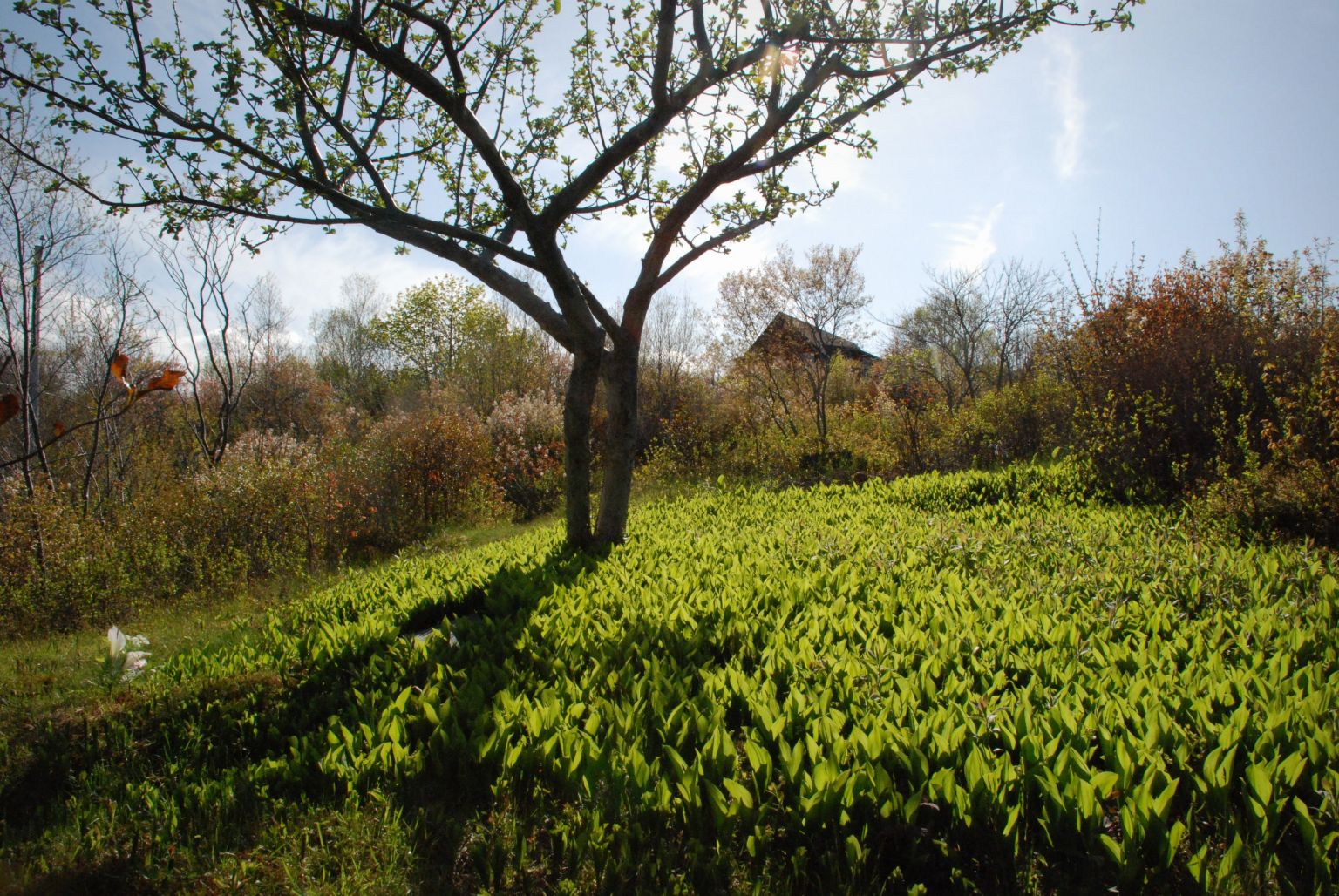 Before power mowers, lily of the valley was a traditional ground cover in rural cemeteries. 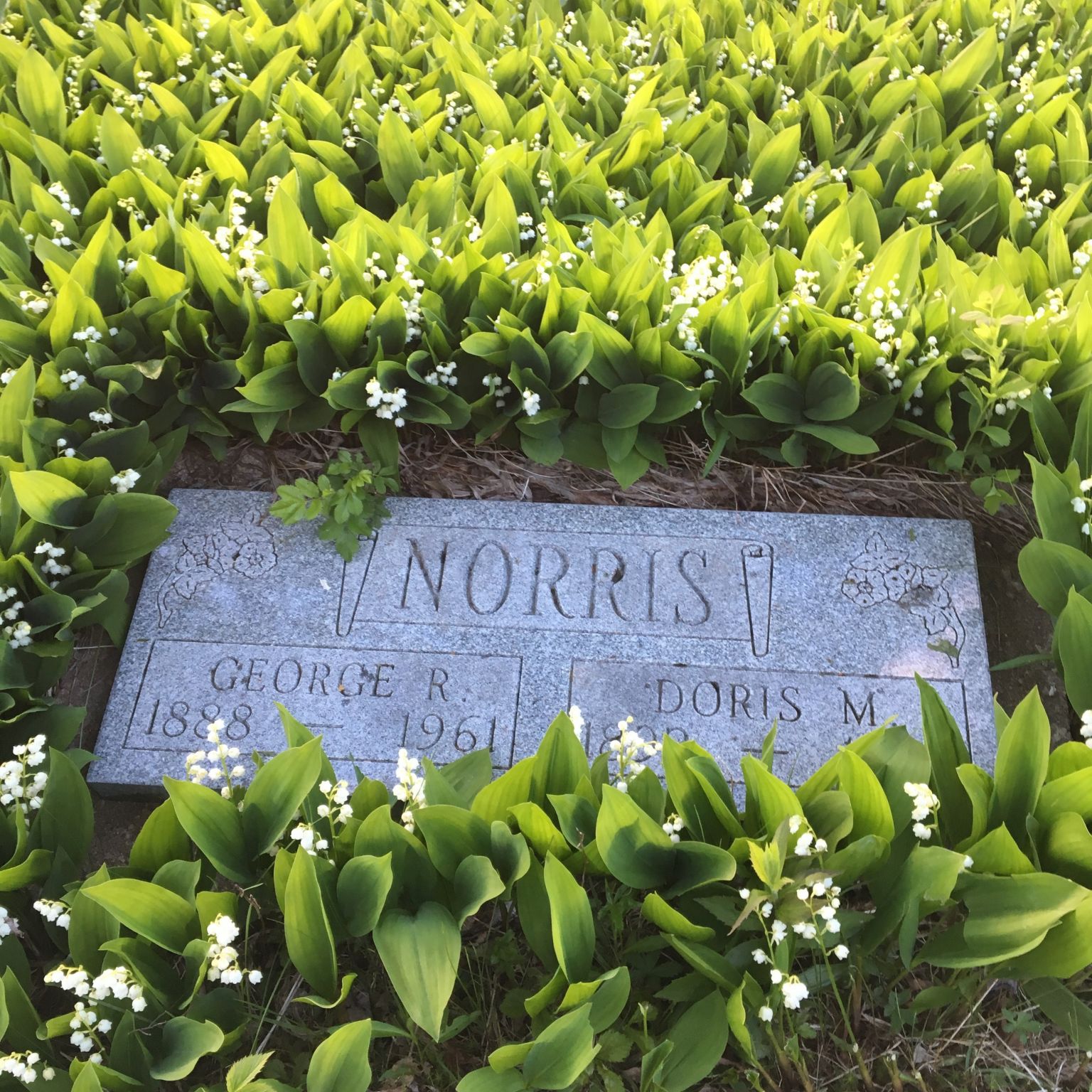 My favourite part of the cemetery is the old section on the harbour side. It has broad patches of lambkill (sheep laurel) and blueberry. 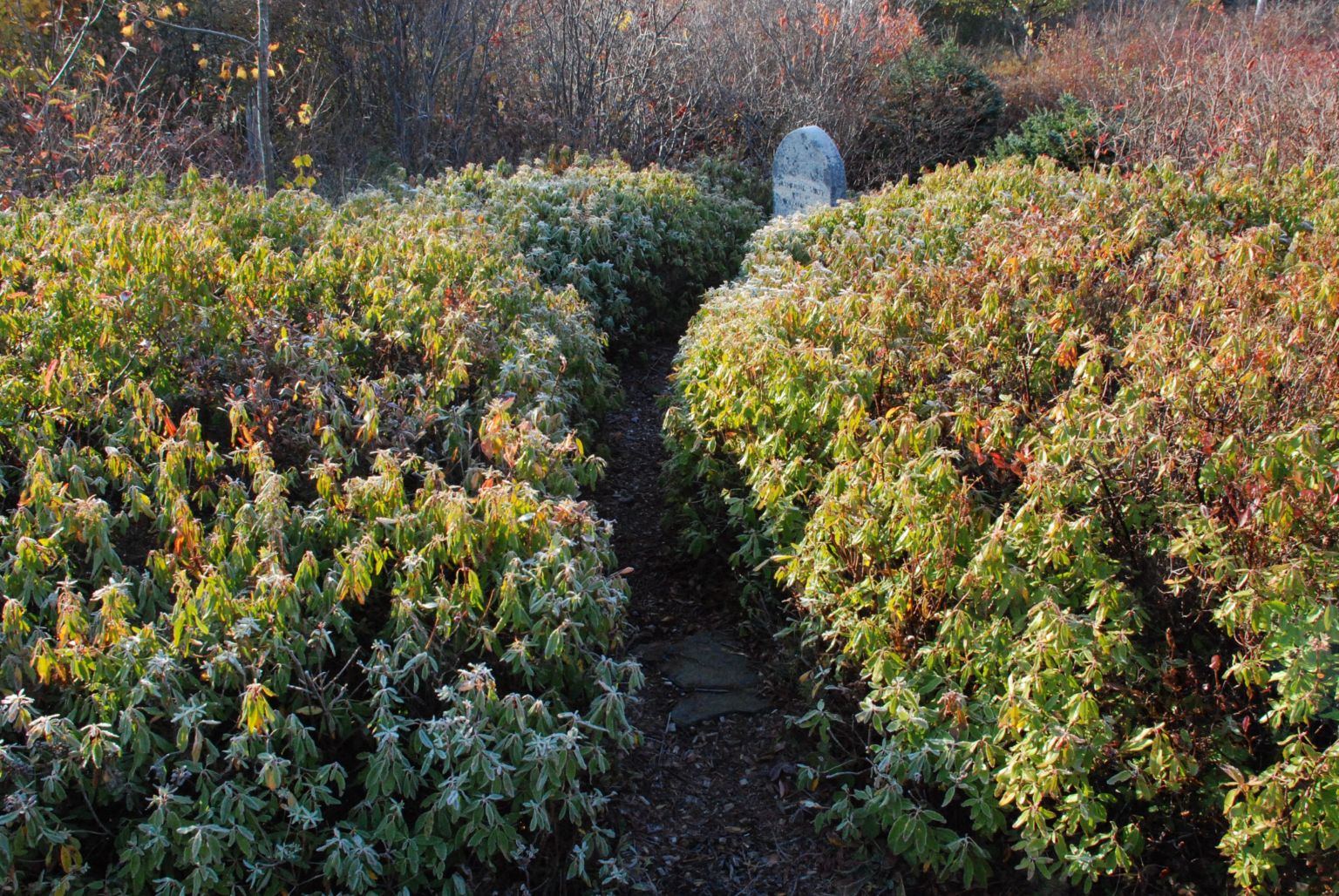 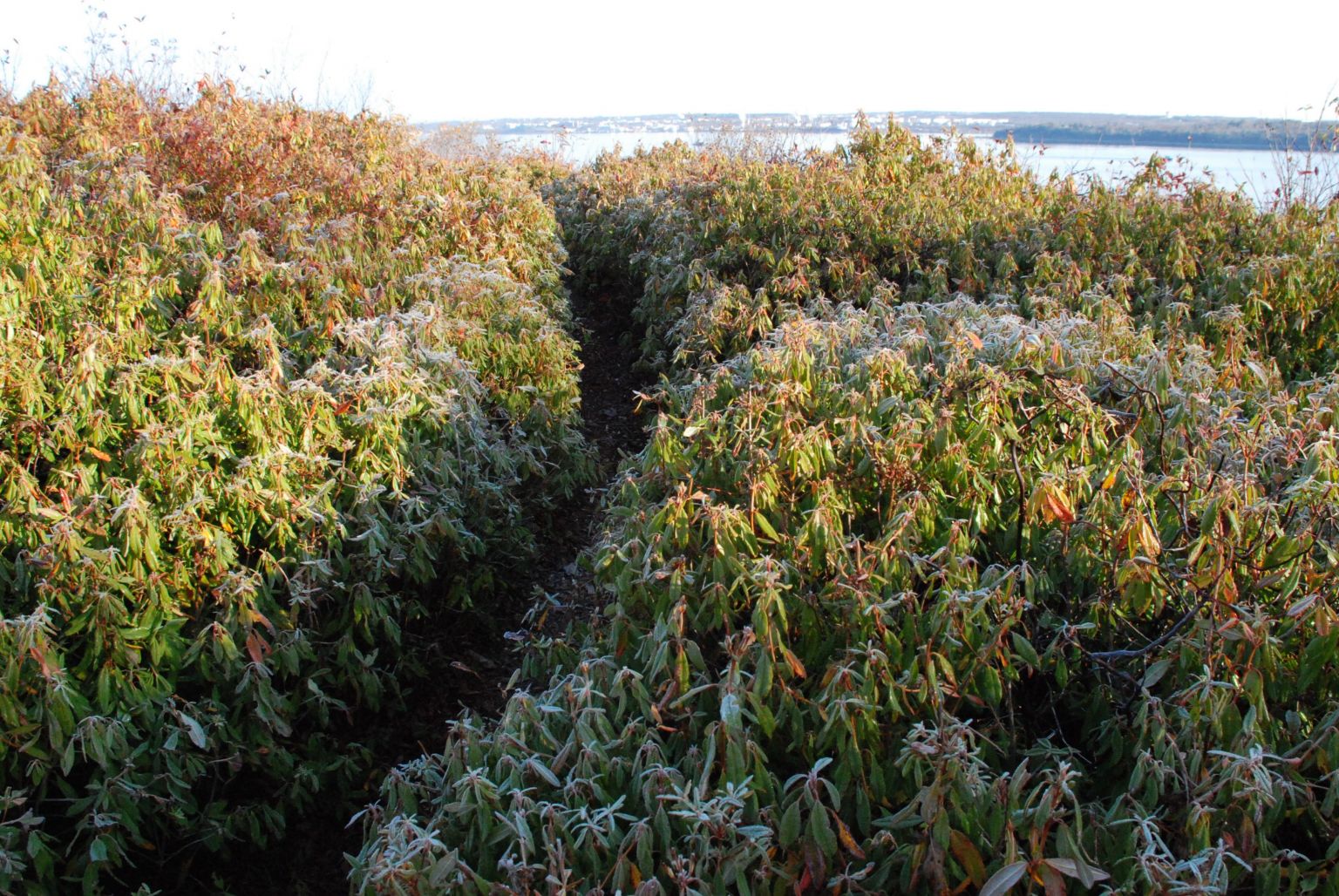 A bit of pruning is required to keep down higher vegetation but you are rewarded with a landscape of incredible beauty in all seasons. 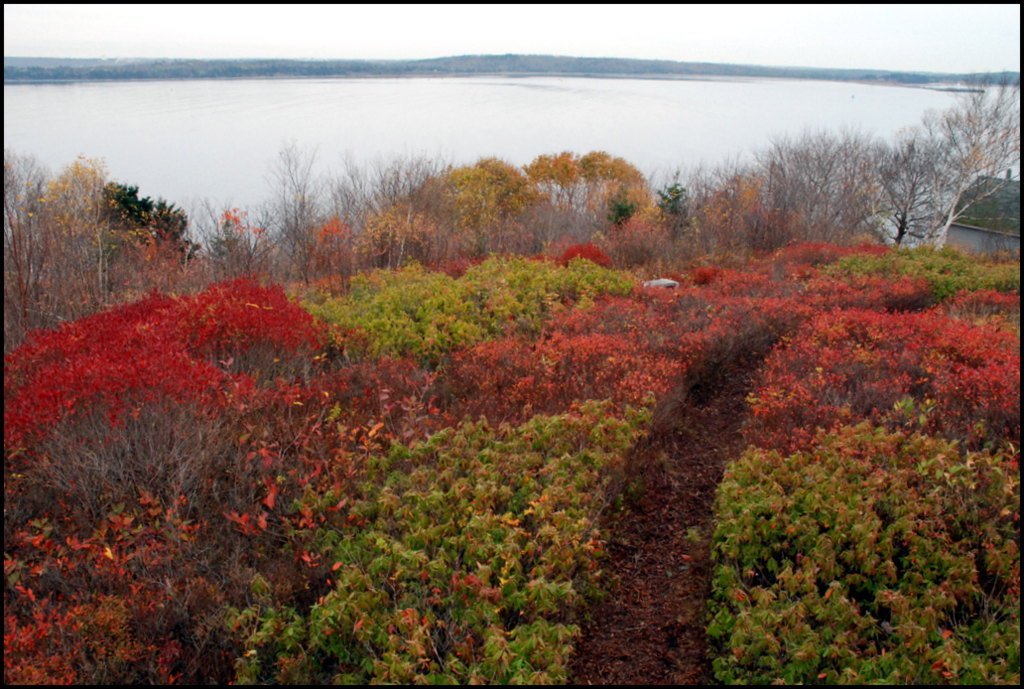 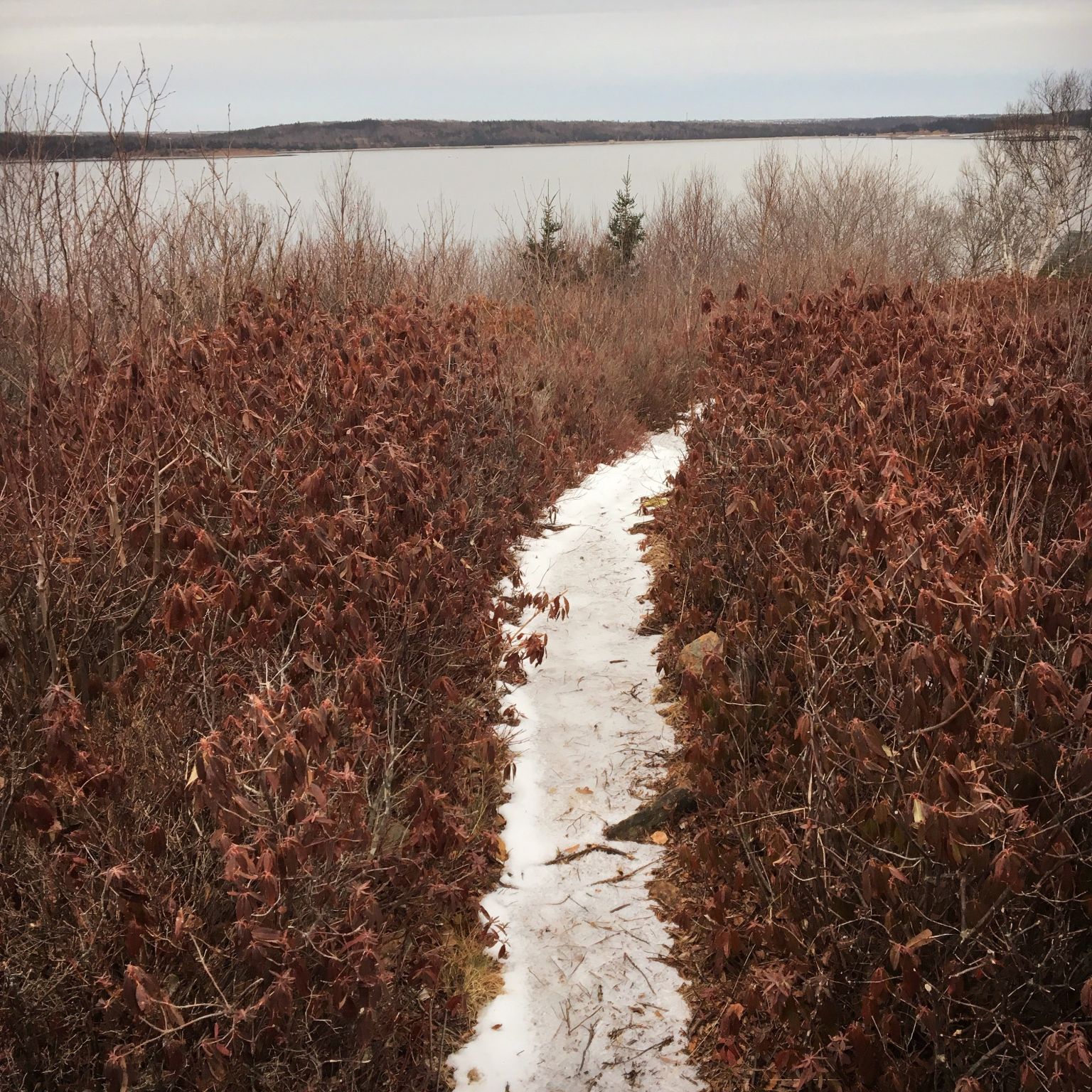 The oldest marked stones are a couple from the 1830s. 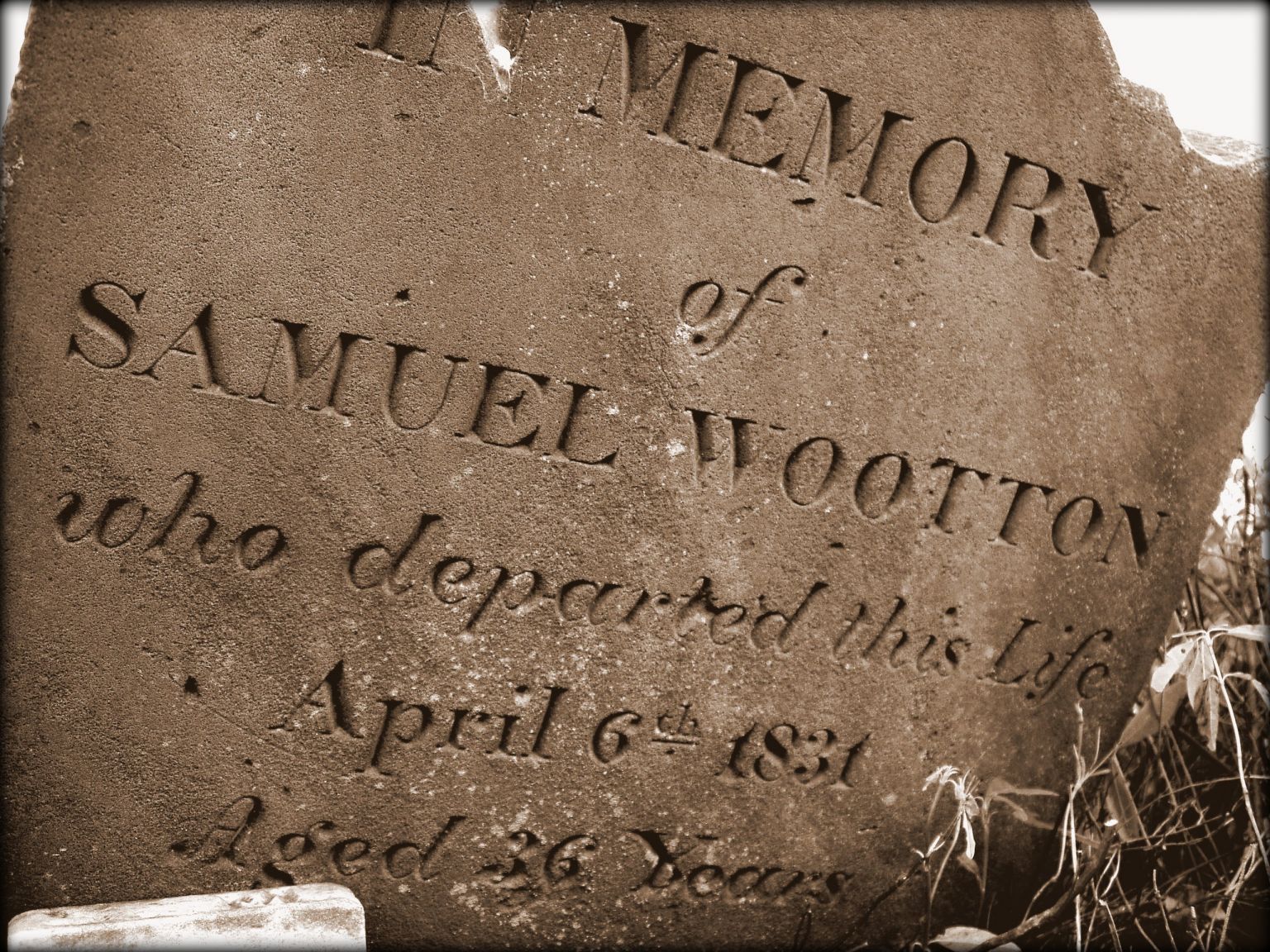 In the old section there are mostly fieldstone markers because carved gravestones would have been beyond the resources of most families in the early fishing community. 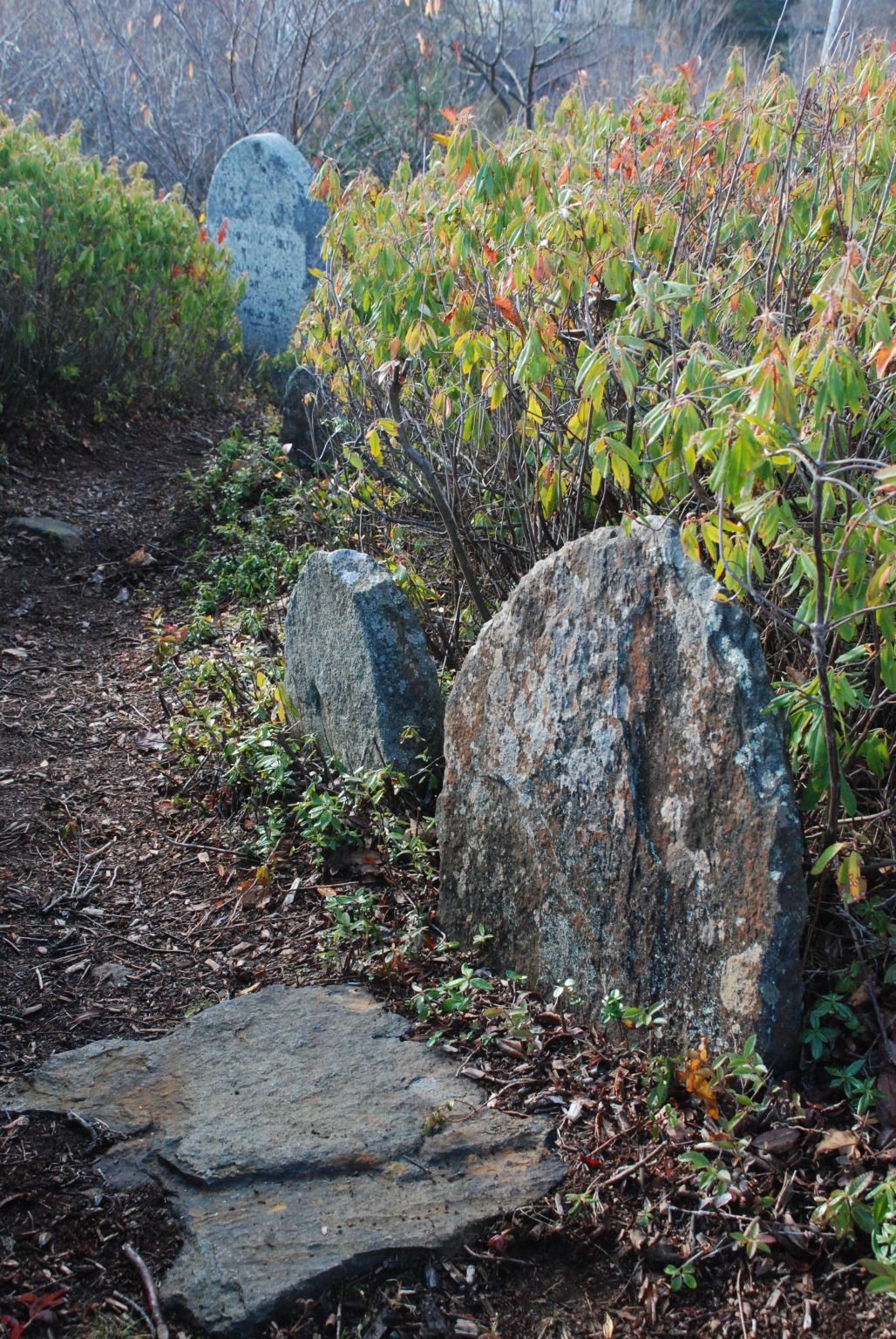 A few of these natural stone markers have laboriously carved initials of the deceased. 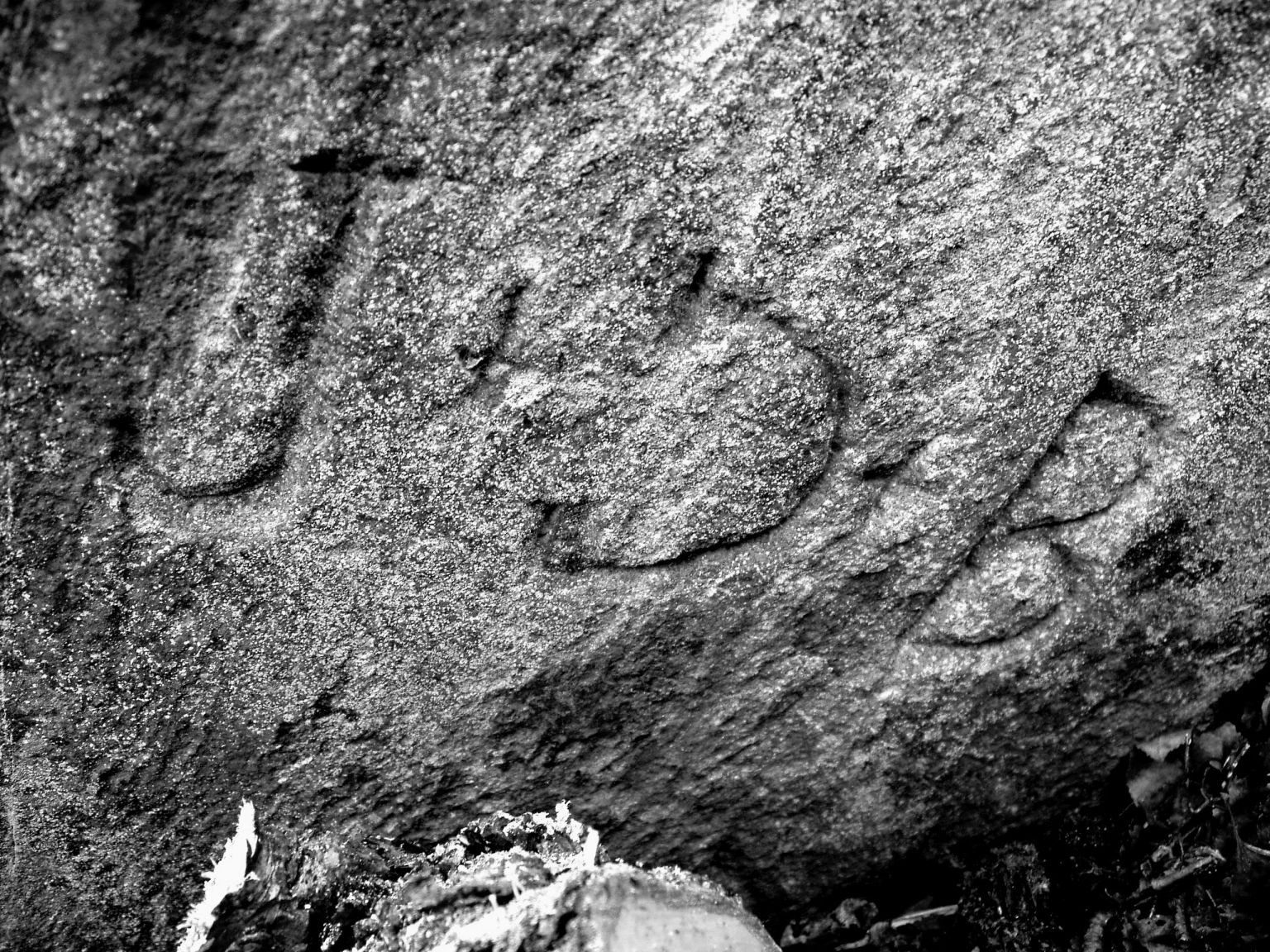 The oldest stones record many names that are still familiar in the community. 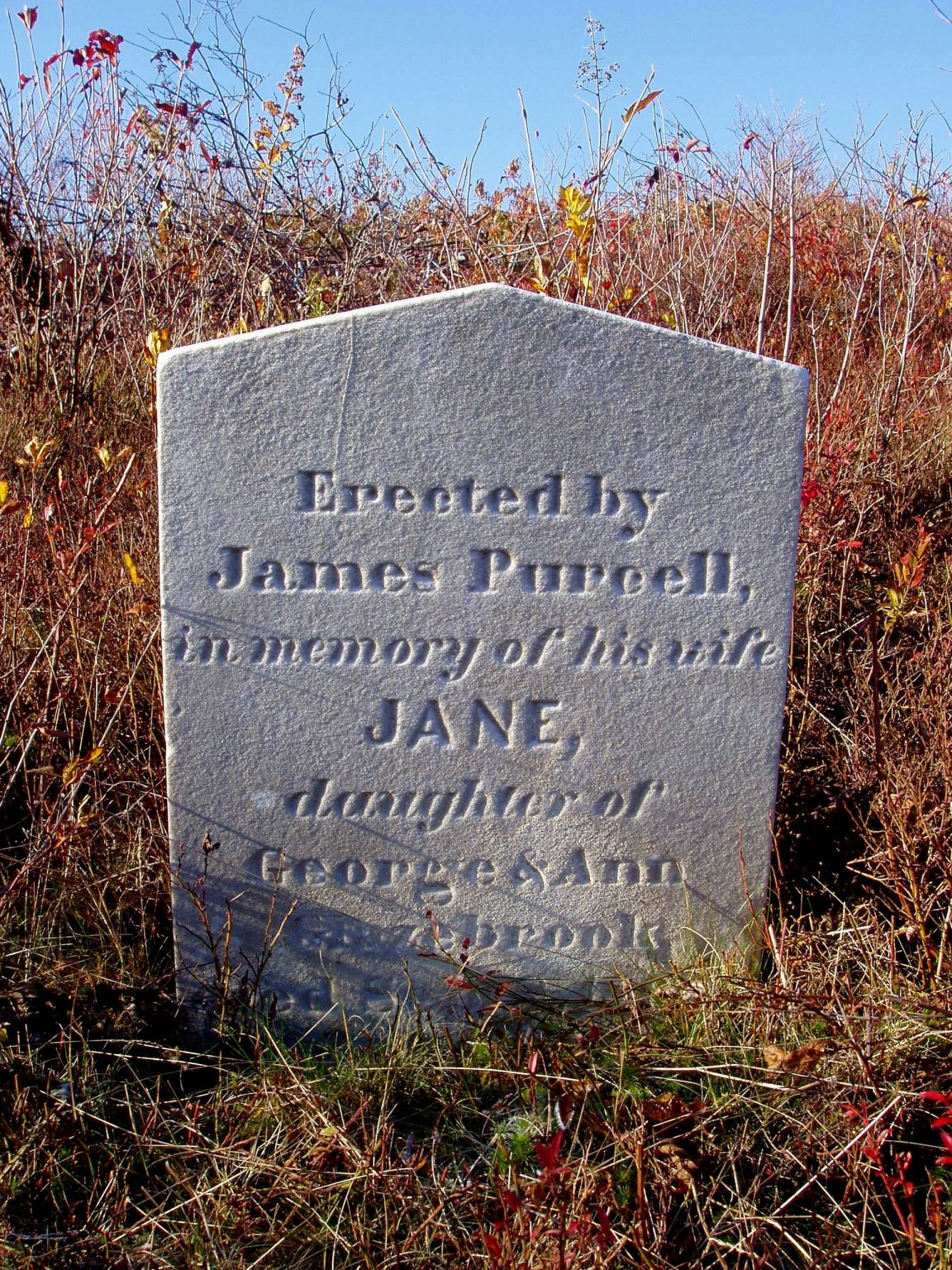 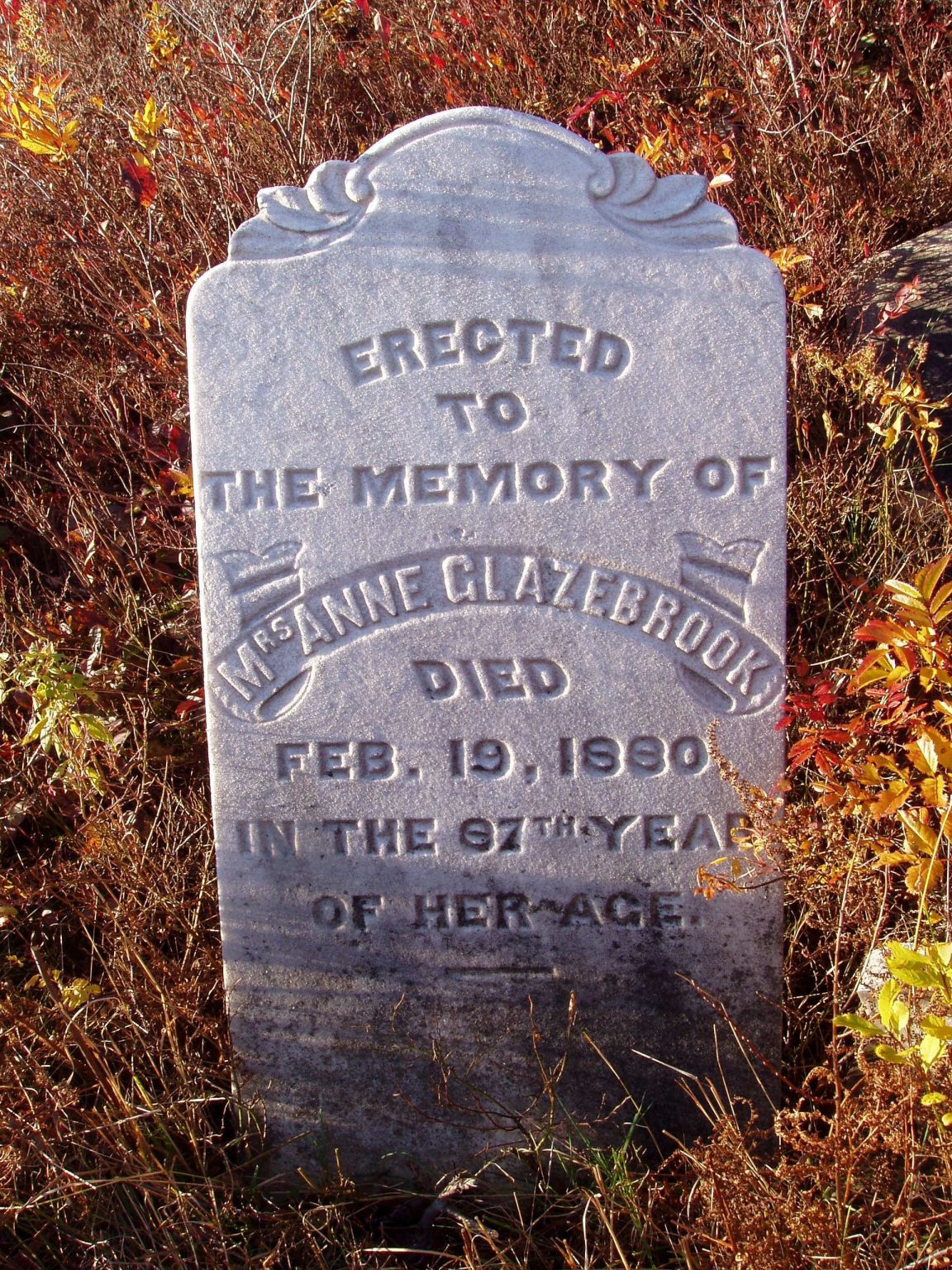 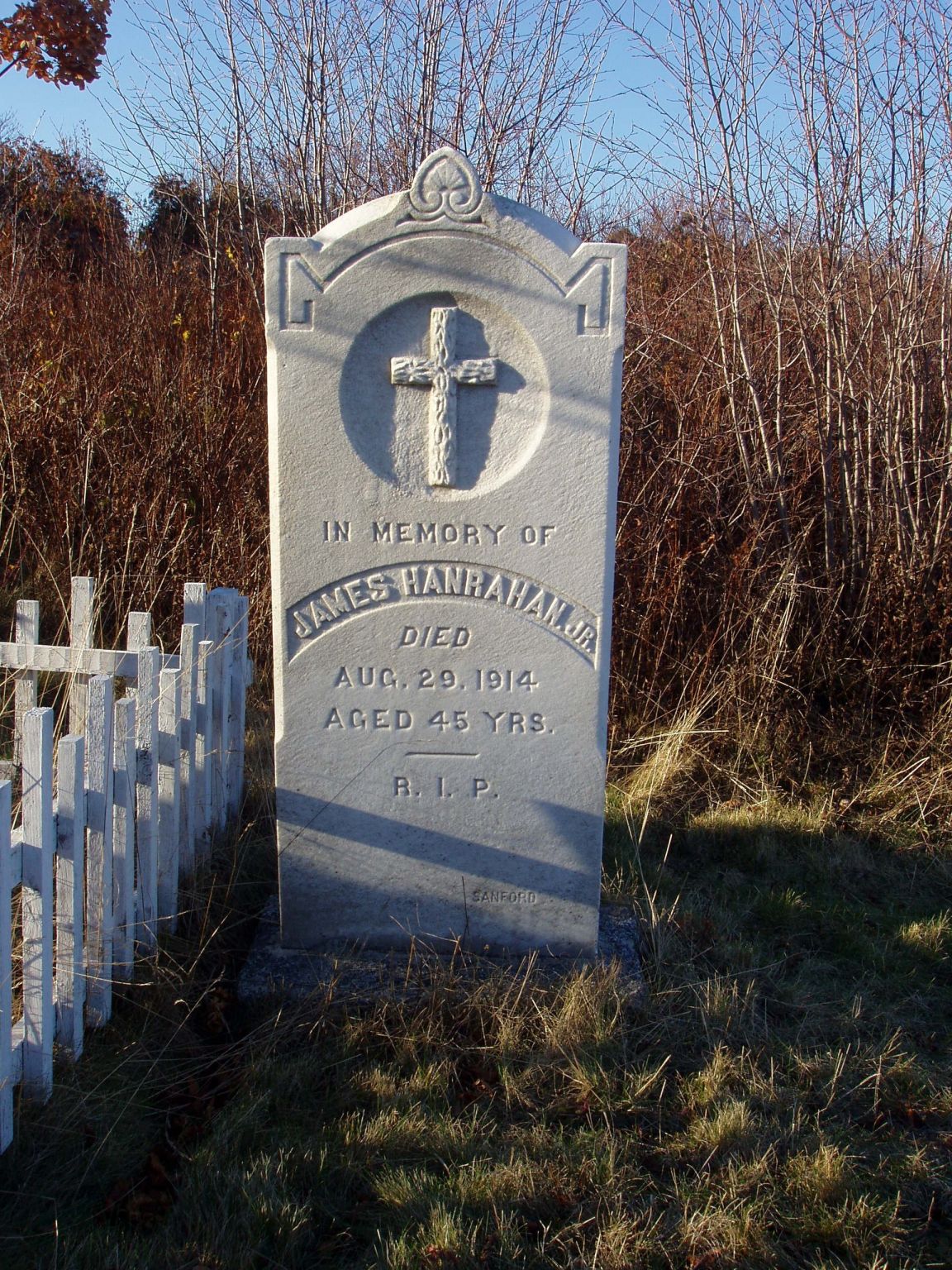 To my eye, nature has provided some beautiful settings for many of the older stones. Elizabeth Purcell is literally pushing up daisies. 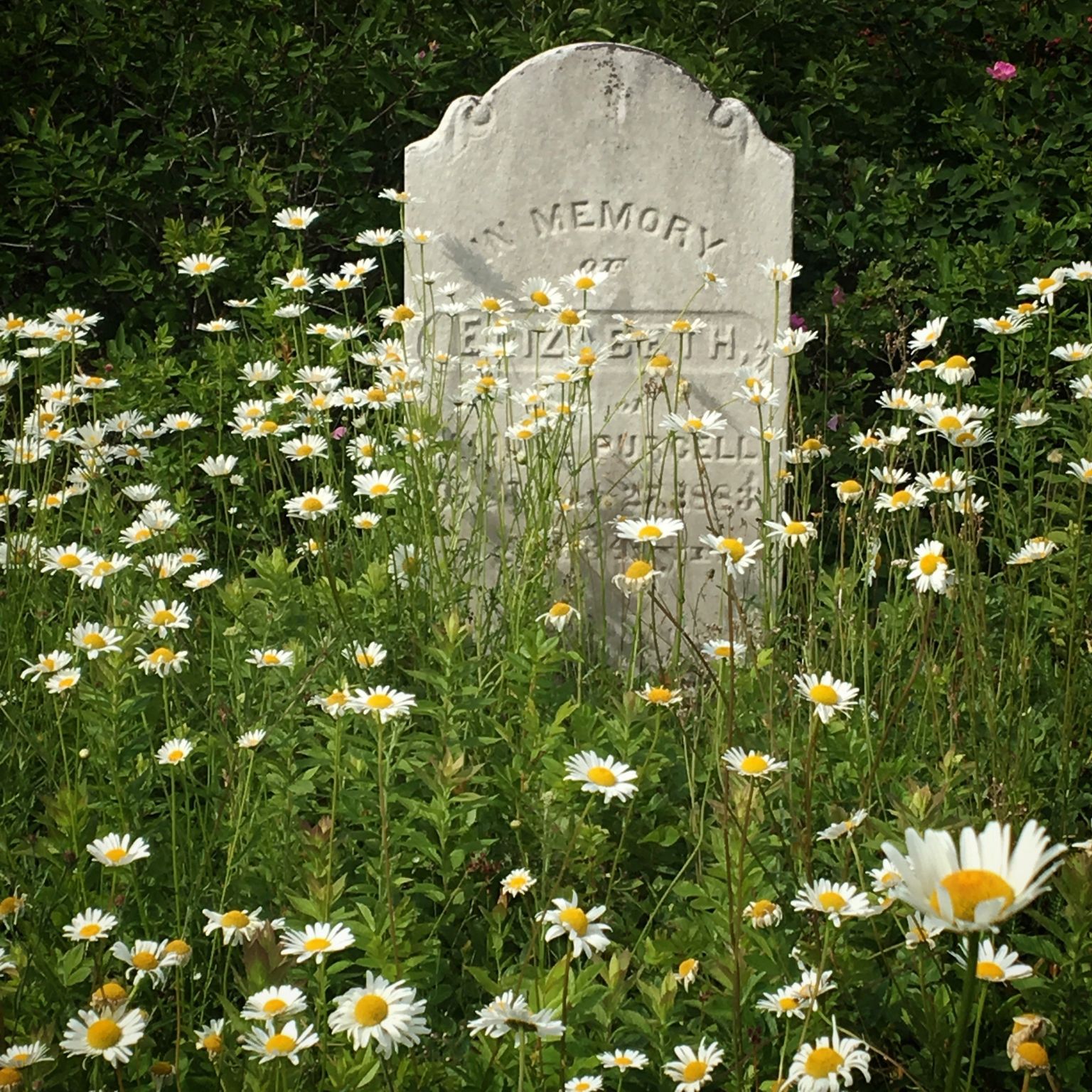 And the native ferns and viburnums provide the perfect setting to be “at rest.” 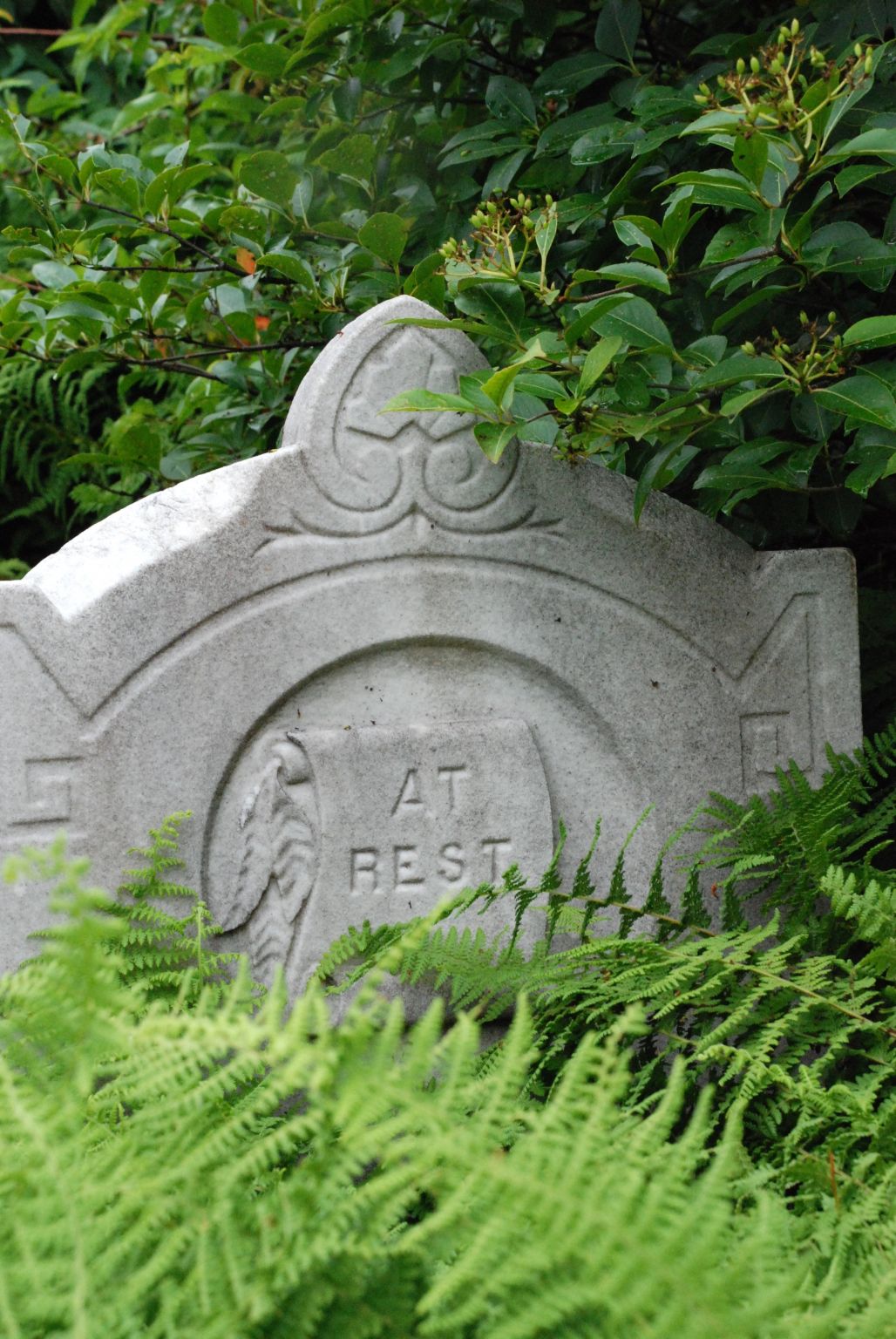 But the exuberance of this contemporary plot has its own special charm, too. 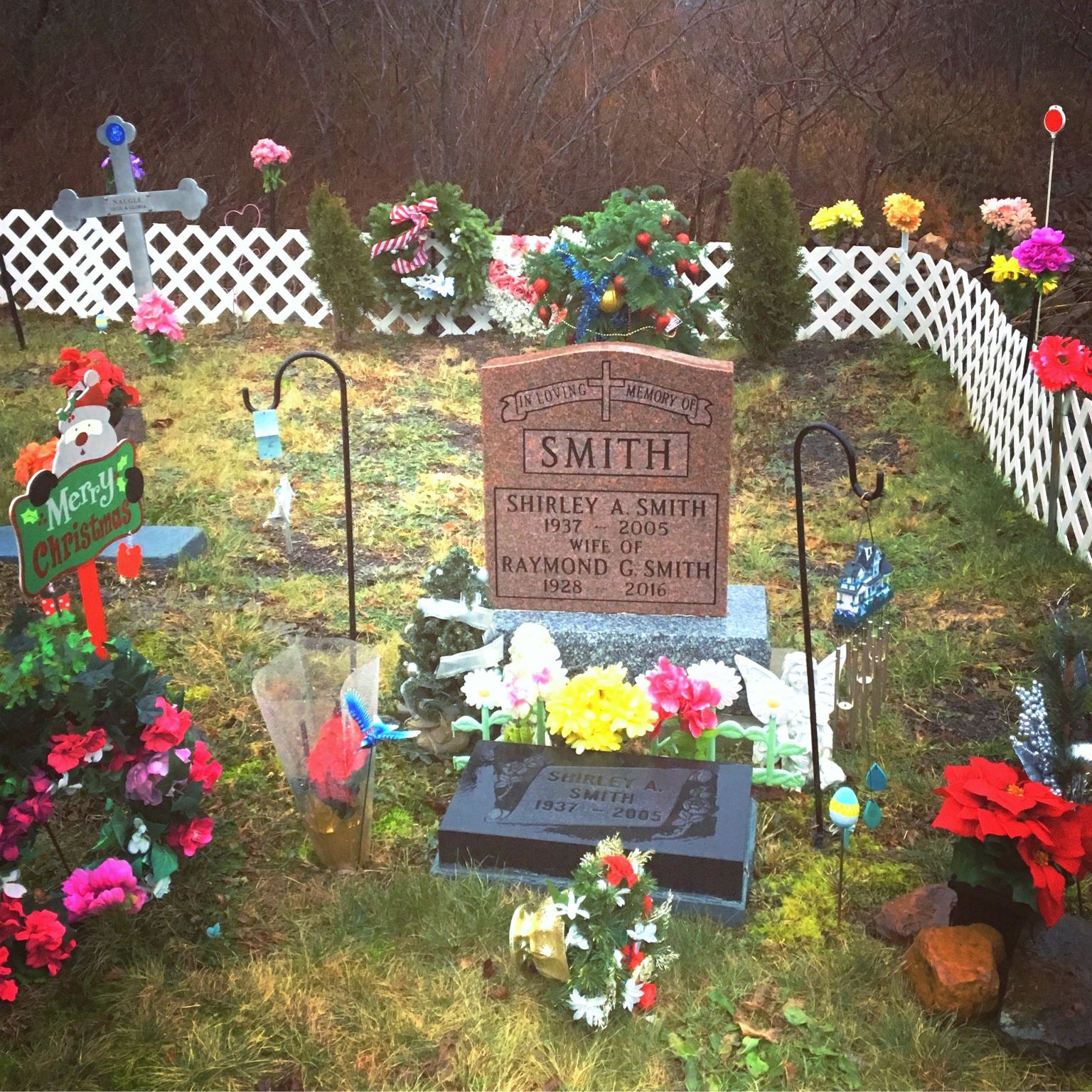 Nothing much happens in the cemetery for most of the year, it is a place for a little quiet contemplation of the panoramic view. An exception was a beautiful ceremony at the graves of two brothers on Remembrance Day in 2016. I told the story here. 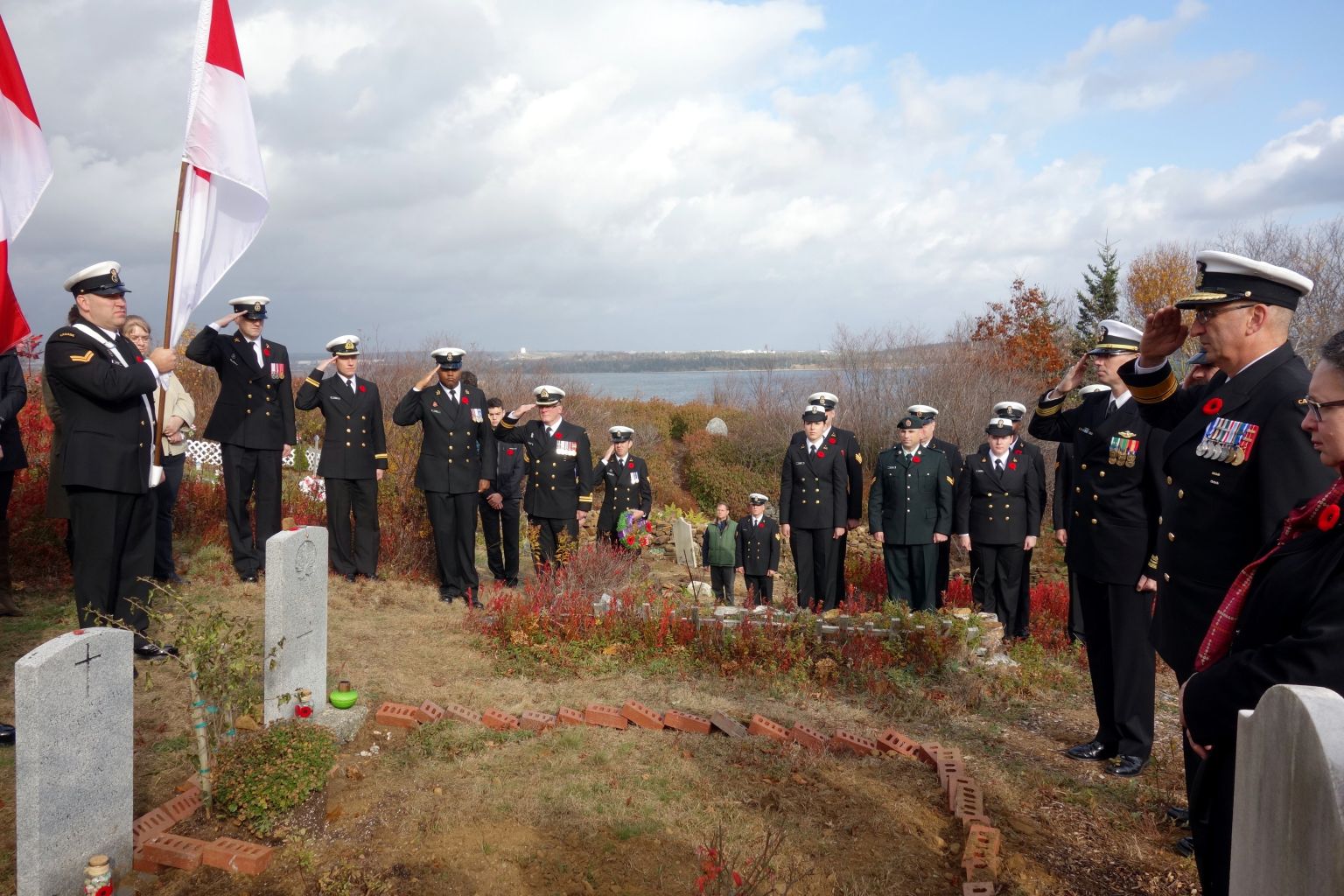 It was also a great place for friends and their families to watch the Parade of Sail during an early Tall Ships visit.

The cemetery means many things to the community. This is my very personal experience with a beautiful place of commemoration and remembrance.

On some early summer mornings, I will make a quick trip over to the cemetery to pick a few blueberries or blackberries to eat with our granola. 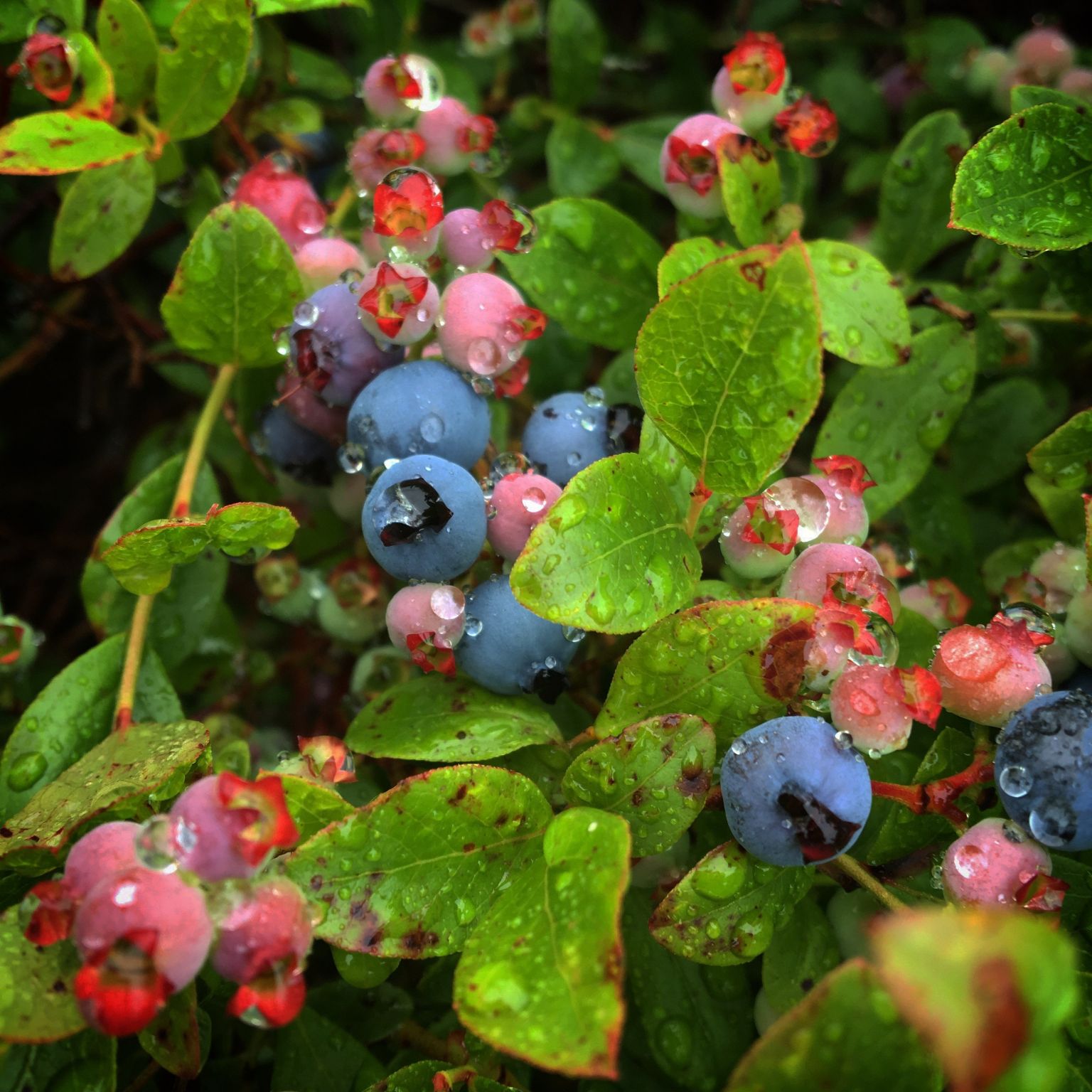 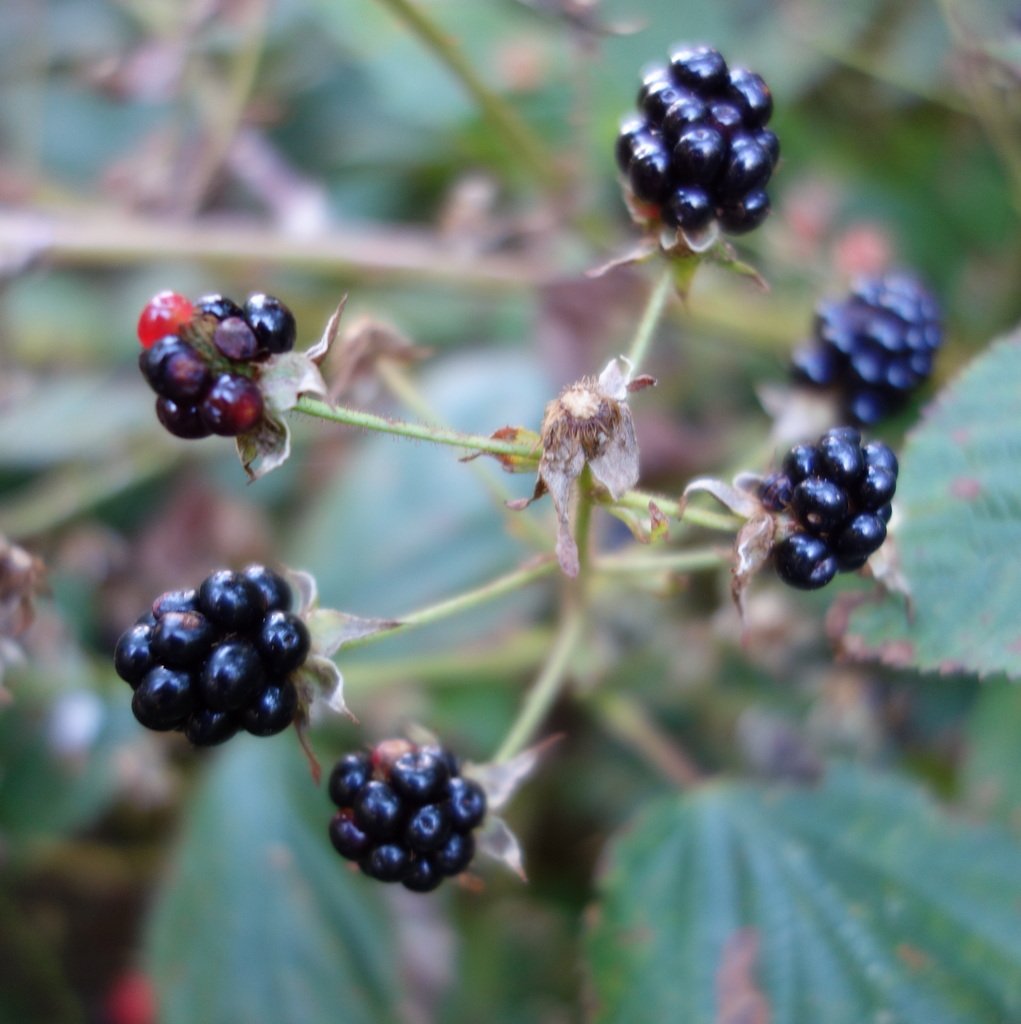