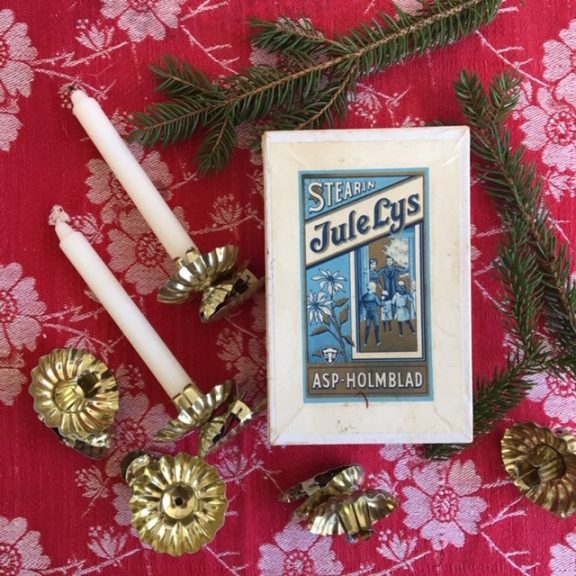 Recently I heard a documentary on CBC radio by Bill Richardson, detailing his memories of those candle-powered angels that ring Christmas chimes. Heat from candles make the tiny angels rotate and whack bells, producing a gentle, irritating tinkle. My enduring memories of these devices is being burned repeatedly (Bart Simpson-style) because I couldn’t resist messing with the super hot angels. 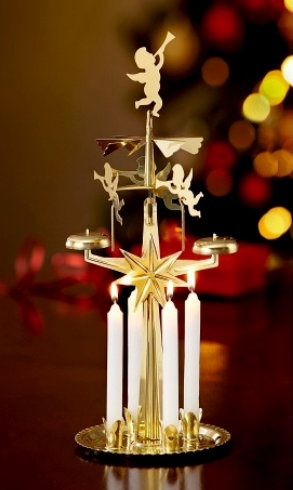 For safety reasons, we no longer have angel chimes but we do have many other candlesticks, some that also have stories. Here are some stationary Christmas angels: a blue haired Danish girl from the 1960s, a robust scrap metal angel from Haiti, and a ceramic Ethiopian carrying a candle in a backpack (the last two from our friend Valerie who works in “post conflict” countries). . 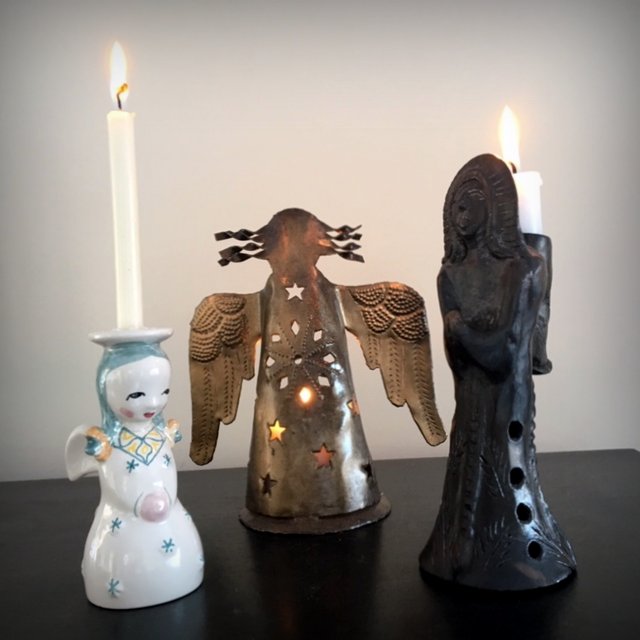 These tin Christmas tree candle holders came from Mexico. To reach the workshop where they were made, we had to walk through the owner’s house and out the kitchen door to a small backyard factory. The intense chemical smell of lacquer, used to colour the tin, nearly knocked us out. 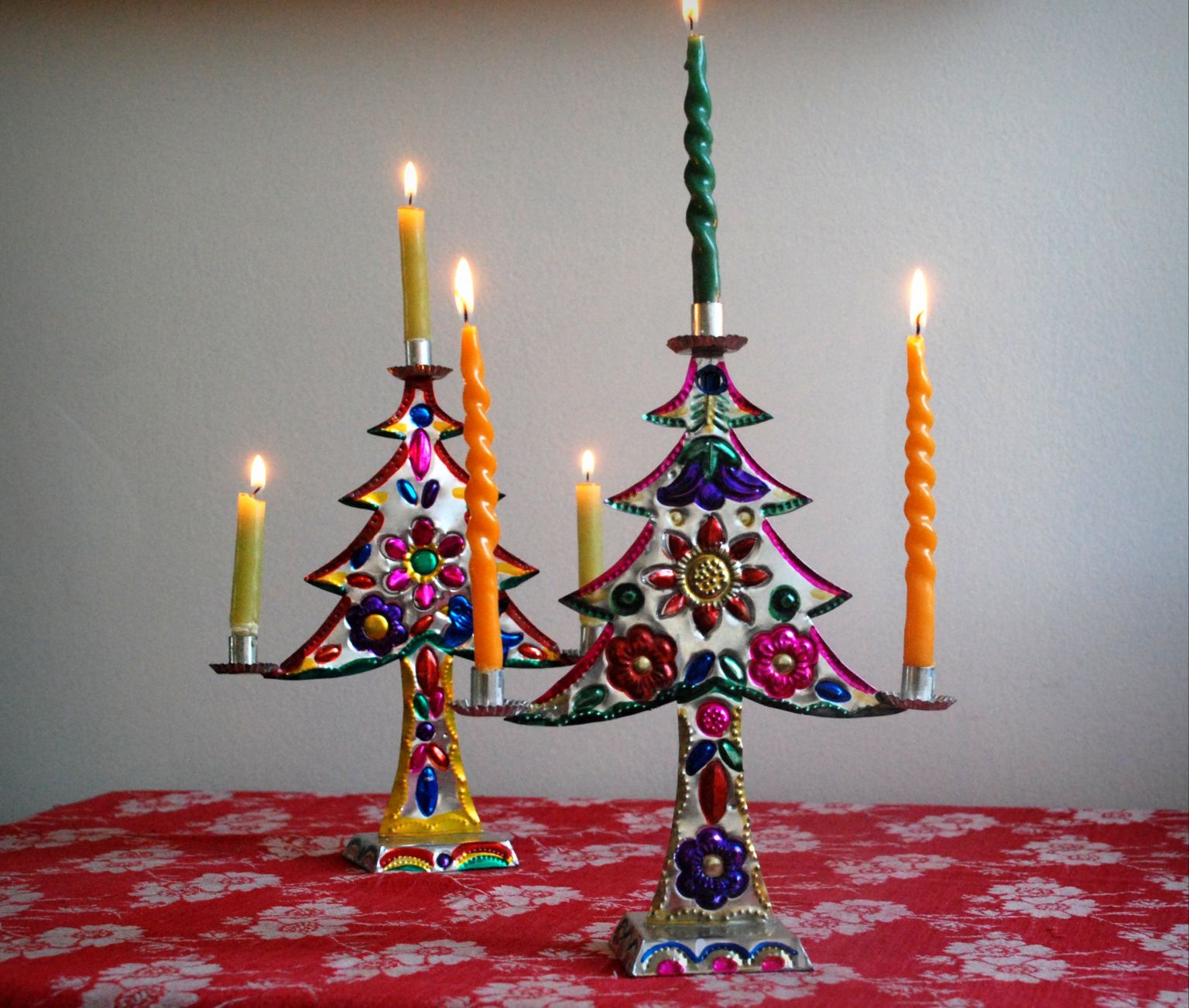 Before the hot and dangerous electric lights of my youth, Christmas trees were illuminated by candles. We have candle holders so I quickly styled this live fire tableau for you, including some hundred-year-old glass ornaments. 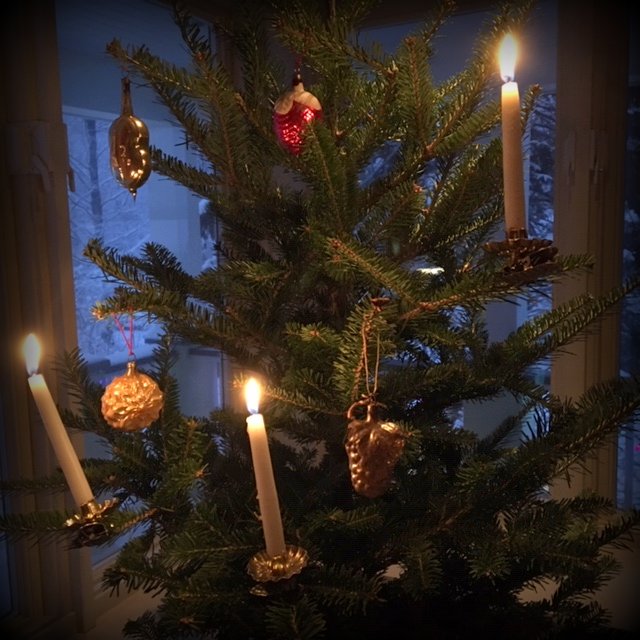 In a world where some people keep the lights on their trees lit continuously for a month, candles seem particularly strange and foolhardy. In reality, candles were only intended to be lit and admired for a few minutes of very special illumination. The illustration on the cover of a box of tree candles shows how to do it. Tidy children are confined to the hall, and then the parents fling open the door to the parlour and reveal the tree for a moment of smoking glory. 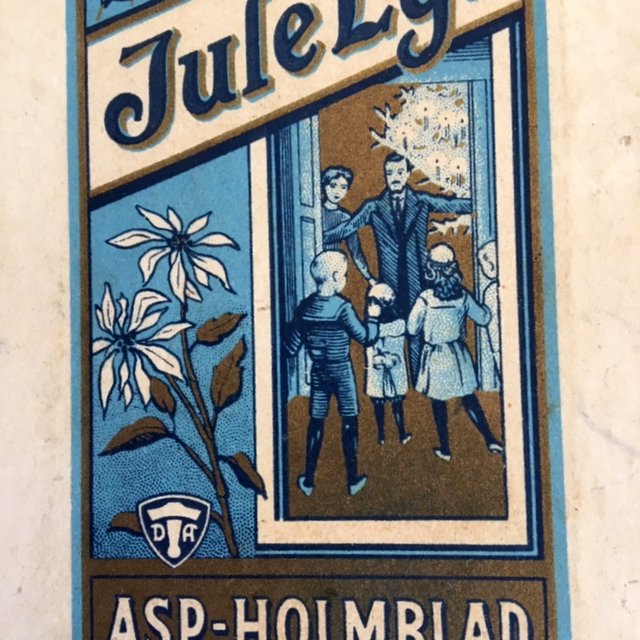 A story of giving and celebration, and a candlestick

Some years ago we visited New York’s Lower East Side Tenement Museum. Initially I had not been particularly interested, but it turned out to be one of the most powerful museum experiences I’ve ever had (and my whole working career was in museums). The six-story tenement had been shuttered and unoccupied since the 1930s when it was discovered in the 1990s. Over the years, the museum’s  two tenement buildings had housed over 15,000 working class immigrants from over 20 nations.

When we visited, several apartments had been restored to tell the stories of occupants from different time periods. In the apartment of the Levine family, who had arrived from Poland in 1890, I had a flash of understanding about a family story of my own. I realized that my grandfather had been in a tenement just like this, working with people just like this, at exactly this time. And what triggered this realization was a pair of brass candlesticks (see them on the shelf above the stove). 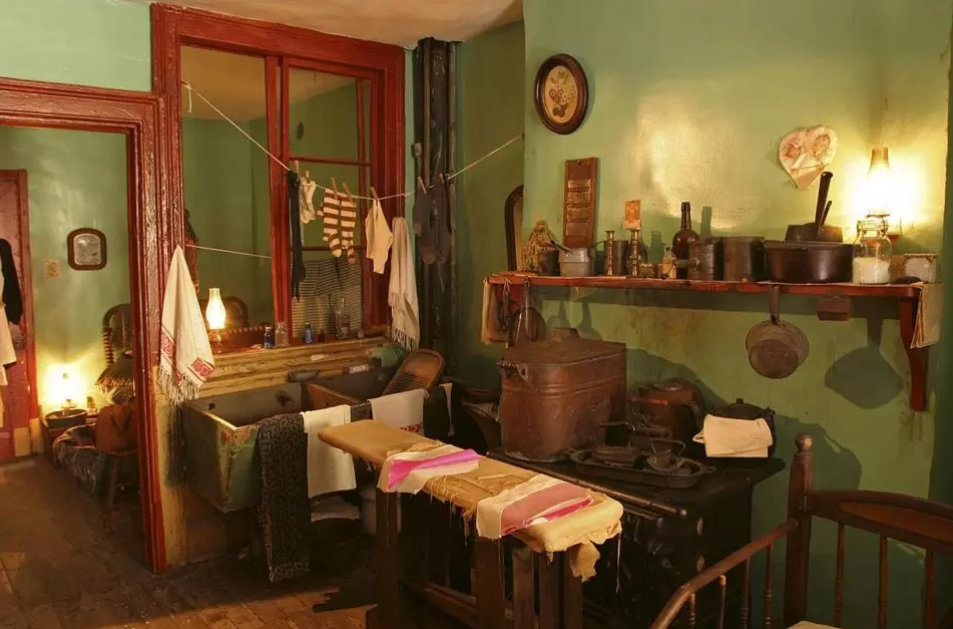 Here’s the story. My grandfather, Melbourne Armstrong, grew up on a farm in the Annapolis Valley (born 1866). He studied to be a doctor, and because there were no medical schools in Atlantic Canada, attended New York University School of Medicine. He graduated in 1892. This is what he looked like at about that time. 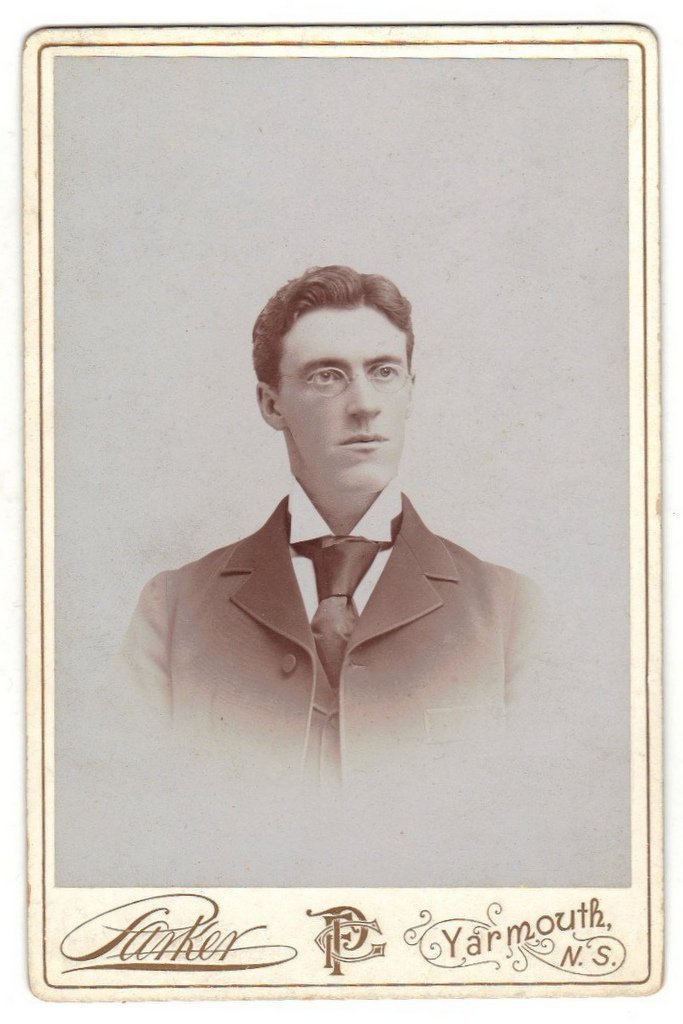 Part of Melbourne’s training included providing free care to poor tenement dwellers. While he was helping during an epidemic of some variety, an immigrant family felt his care had saved the life of their child. They were grateful and insisted he accept a gift that they considered valuable, in a household where there was little of monetary value. He was presented with a heavy brass candlestick. It was brought back to Nova Scotia, where Dr Armstrong practiced medicine in Bridgetown until his death in 1931. The candlestick has always had a special place in our home with a vague sense that it really belonged to mysterious people we did not know.

Through the wonders of the internet I learn that the candlestick is one of a pair of Jewish Sabbat candlesticks, typical of those used in Eastern Europe in the mid-nineteenth century. So we can imagine a little about our anonymous immigrants, who may not have been much different from the Levines.

It is interesting that an object with Jewish religious significance had a treasured life with a Methodist doctor’s family in rural Nova Scotia. Over the holidays we will burn candles in it and think about caring for strangers, and cherishing gestures of goodwill. 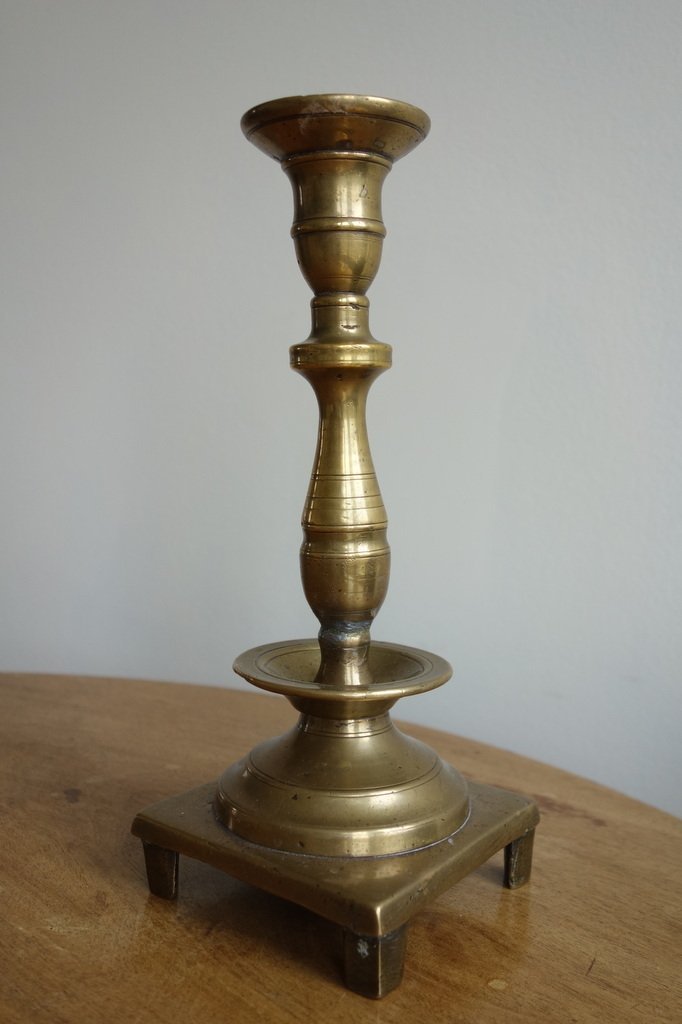 It turned out, what I really wanted was a chance to tell the family story so it would not be lost. Whoops, now I’ve told it again. Here is the candlestick page from the Your Story Our Story site. It’s instructive to read tales of similar candlesticks that have remained in the families that brought them from eastern Europe. 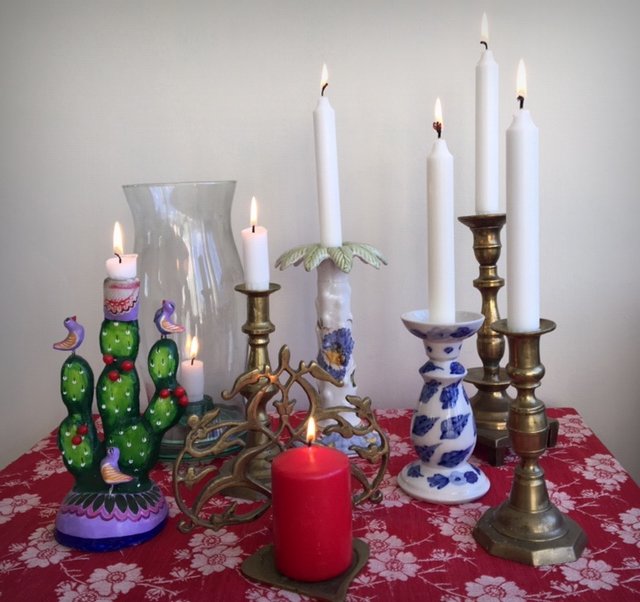