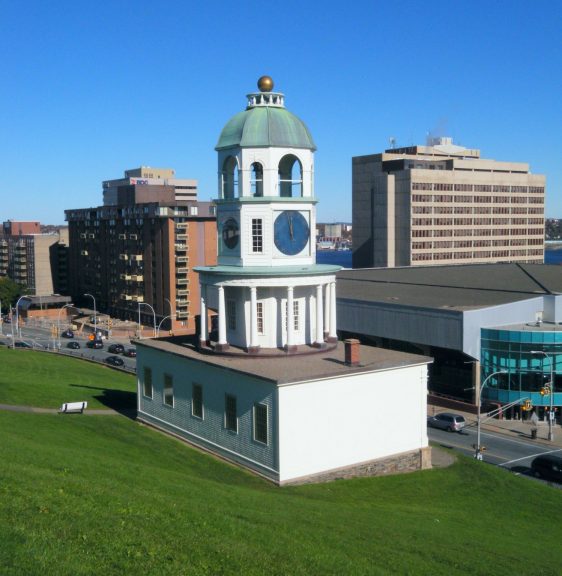 As we change our clocks (and renew our supply of candles), it’s a good time to notice some of the public clocks around town, and acknowledge a few others that have disappeared.

Halifax is clock-centric; we celebrate a 215-year-old clock as the icon of the city. I’ve always thought the base of the Old Town Clock tower was under-detailed, but it’s a little late for that now. 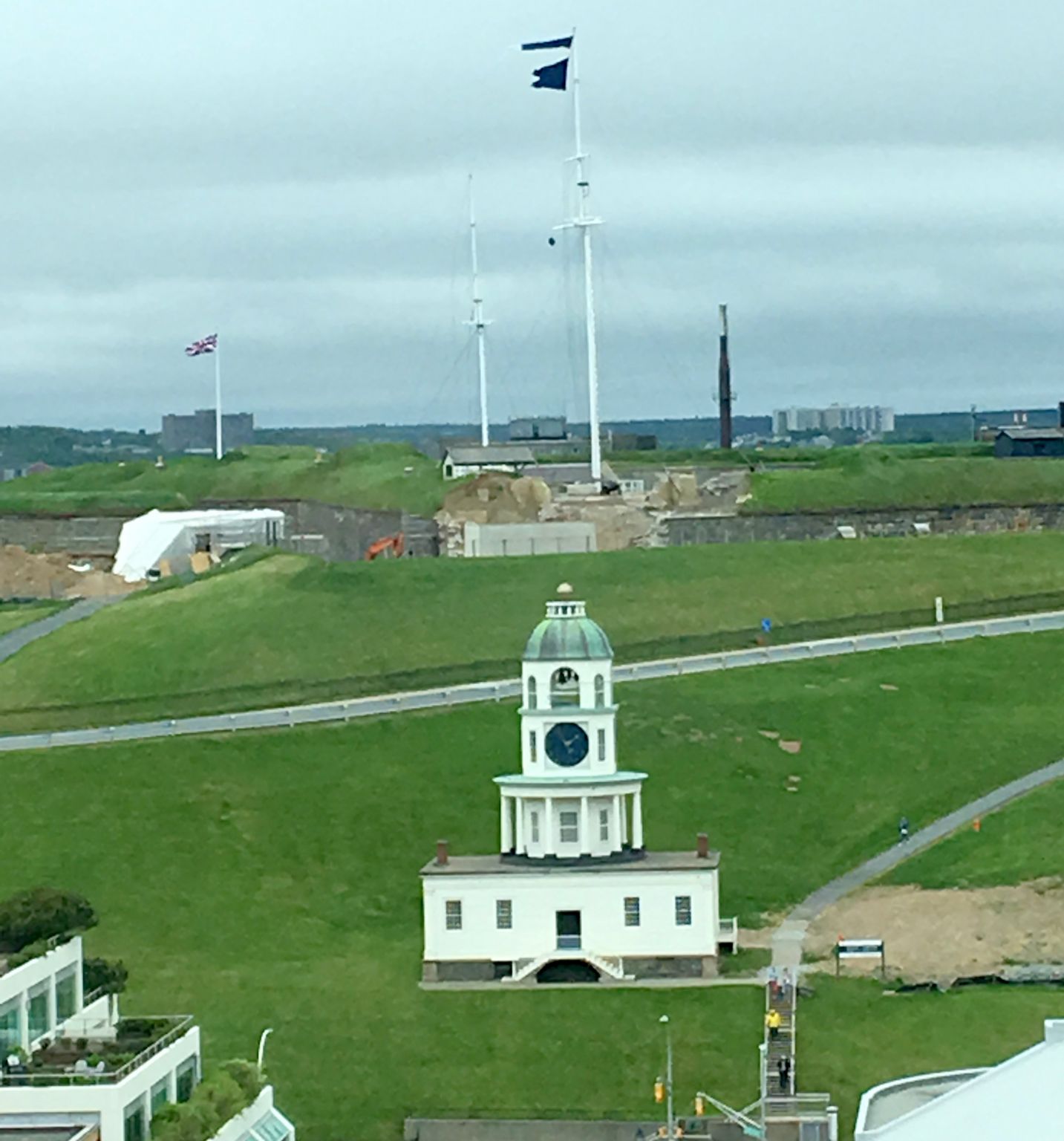 This shot was taken from the 17th floor of a downtown tower during Doors Open.

Some of the charm of the Town Clock is its siting, alone in the middle of the green slope of Citadel Hill. In the late 1960s, there were still decrepit buildings on Brunswick Street to provide a gritty frame for the clock. 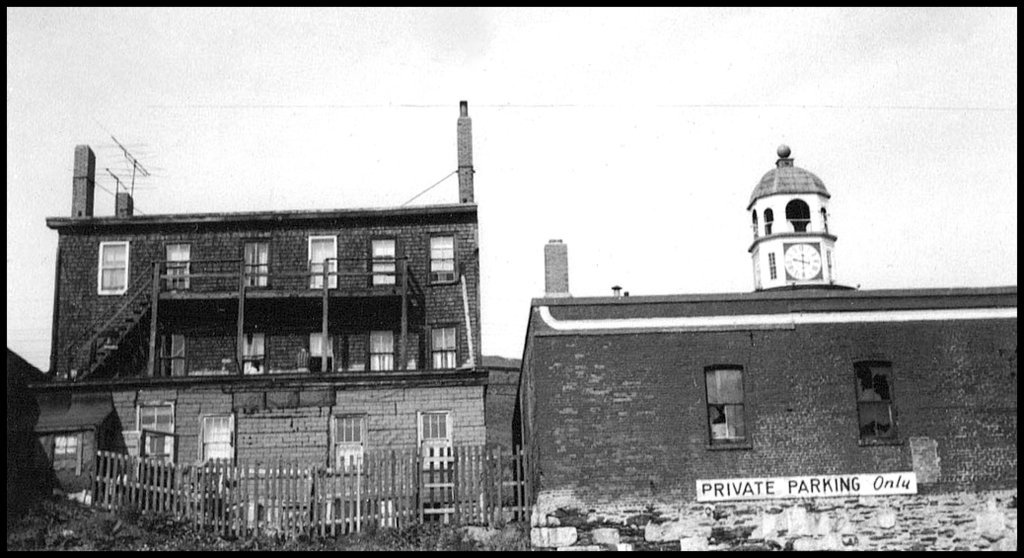 The clock in the tower of City Hall is only about 20 years old; apparently the original timepiece was destroyed in the 1917 Explosion. Now the clock that faces north is stopped at the exact time the munitions ship, Mont-Blanc, blew up. 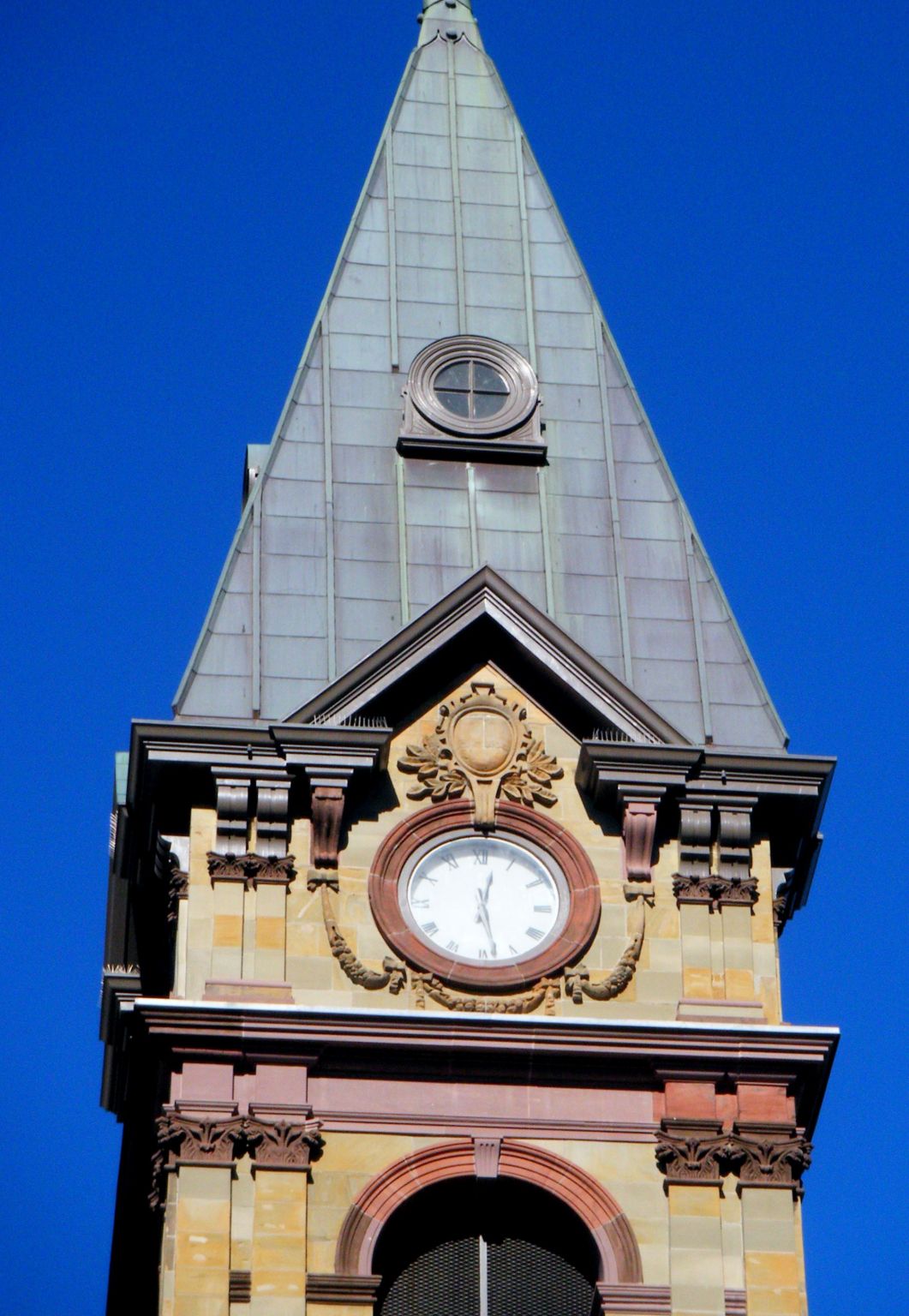 This is a view from the Grand Parade, so I took the photo at 12:28 (if the clock was actually keeping time).

An 18th-century clock from the Dockyards was relocated to the middle of Chebucto Landing, near the ferry terminal. 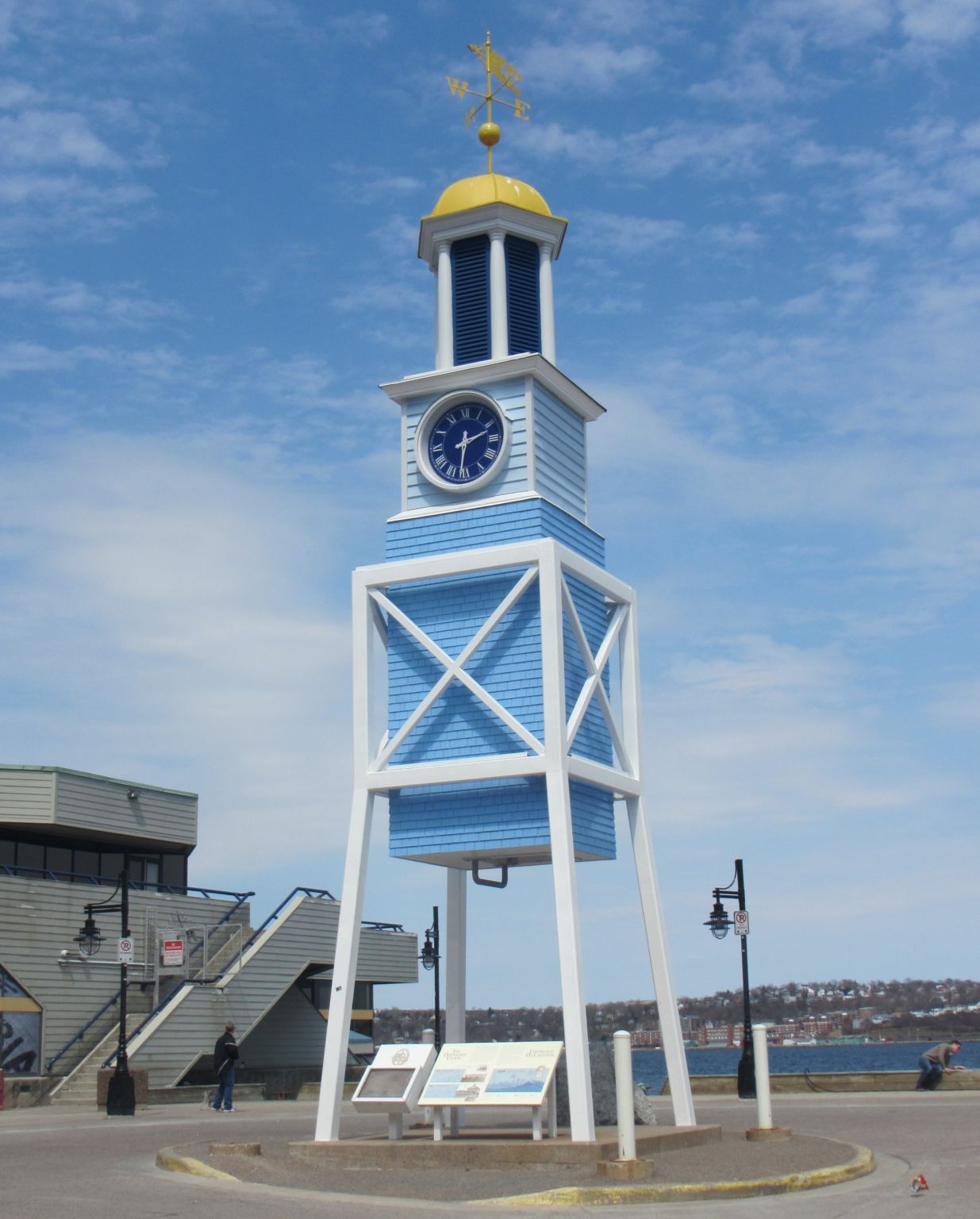 The clock was originally on Number One Store, as this 1880s photograph shows. There is more about it in an earlier blog. 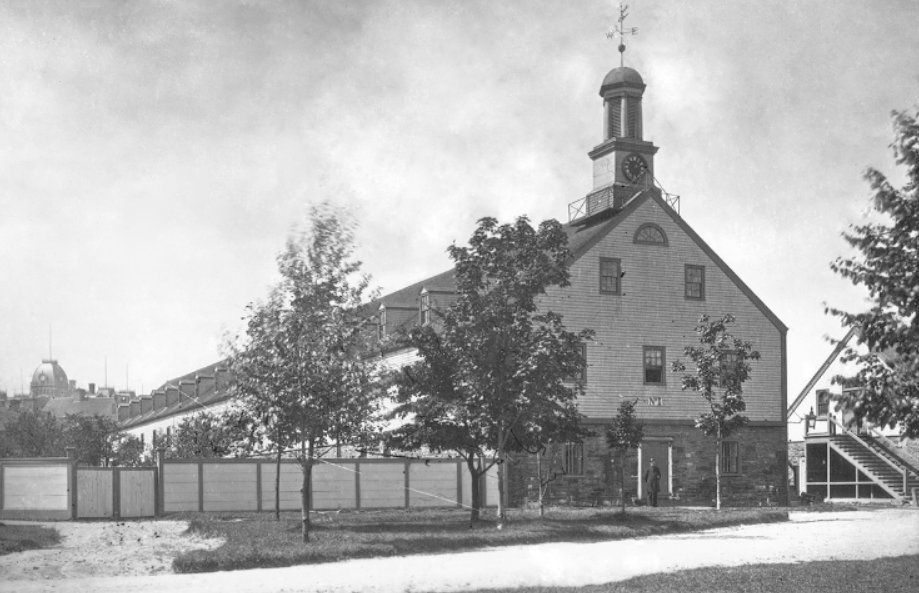 The c1980 clock on the Marriott Harbourfront Hotel references another 18th century clock that was  once on the same site. 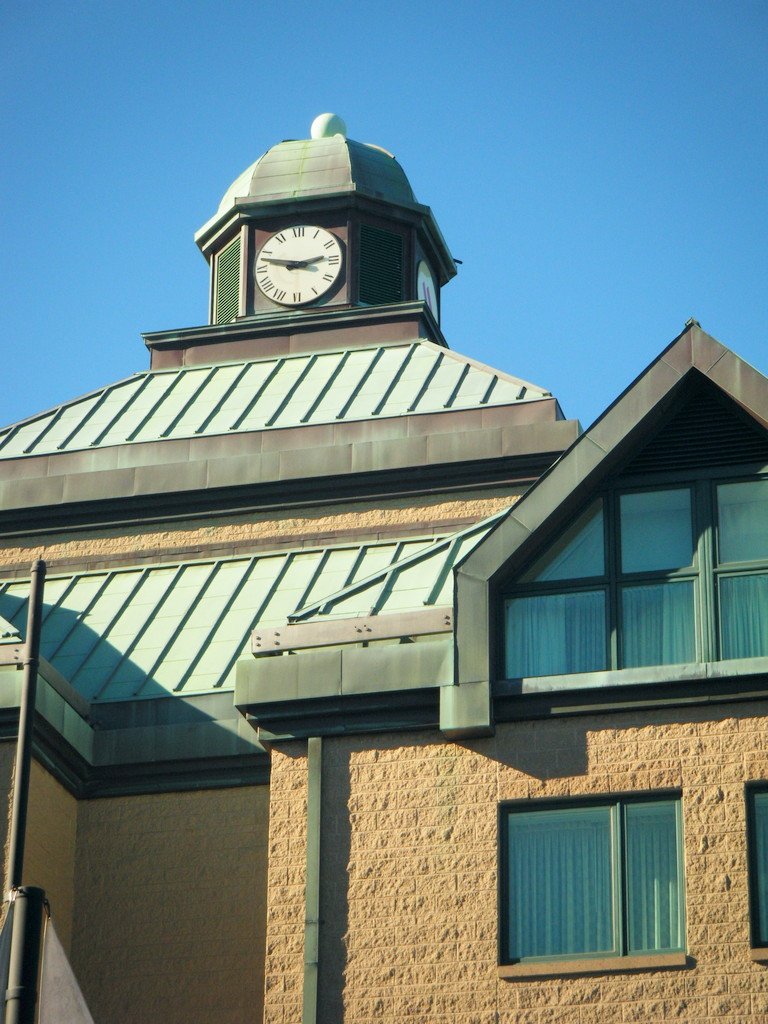 This area had been the Ordnance Yard, associated with the Dockyard. The clock tower, on a stone warehouse building, was perhaps our prettiest ever. 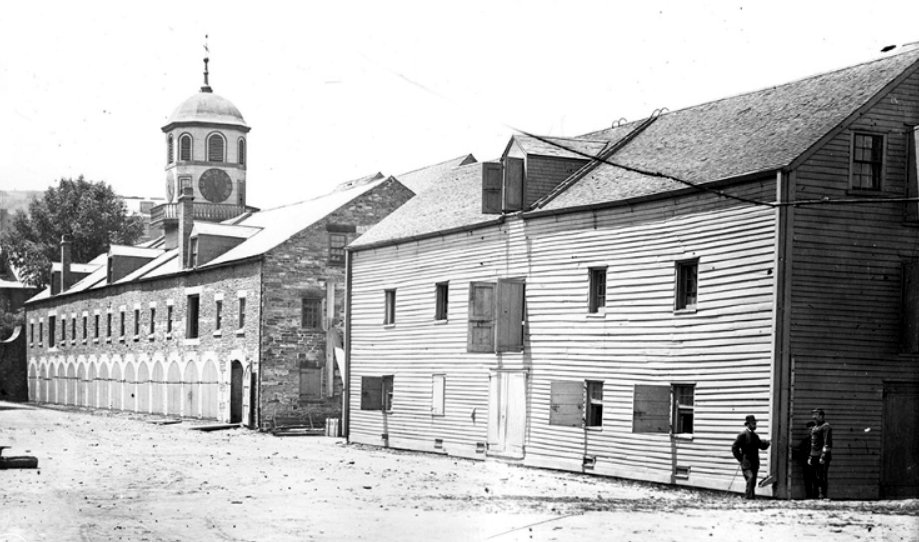 The Marriott was designed by architect Andy Lynch, and he also did the Bishops Landing development and included a clock tower there as well. 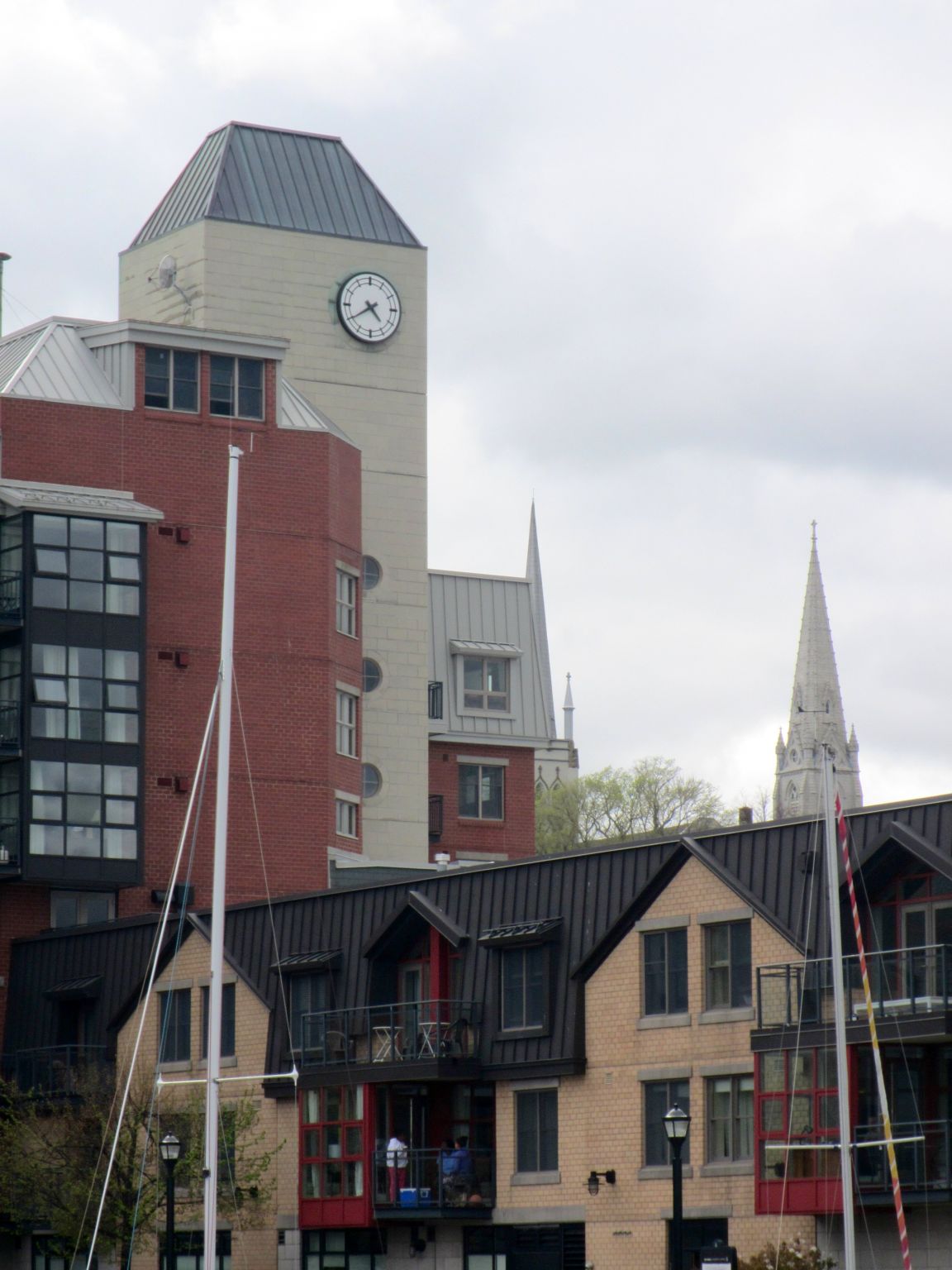 Spryfield has lots of urban planning issues, but it does have a nicely scaled clock on the Spry Centre. 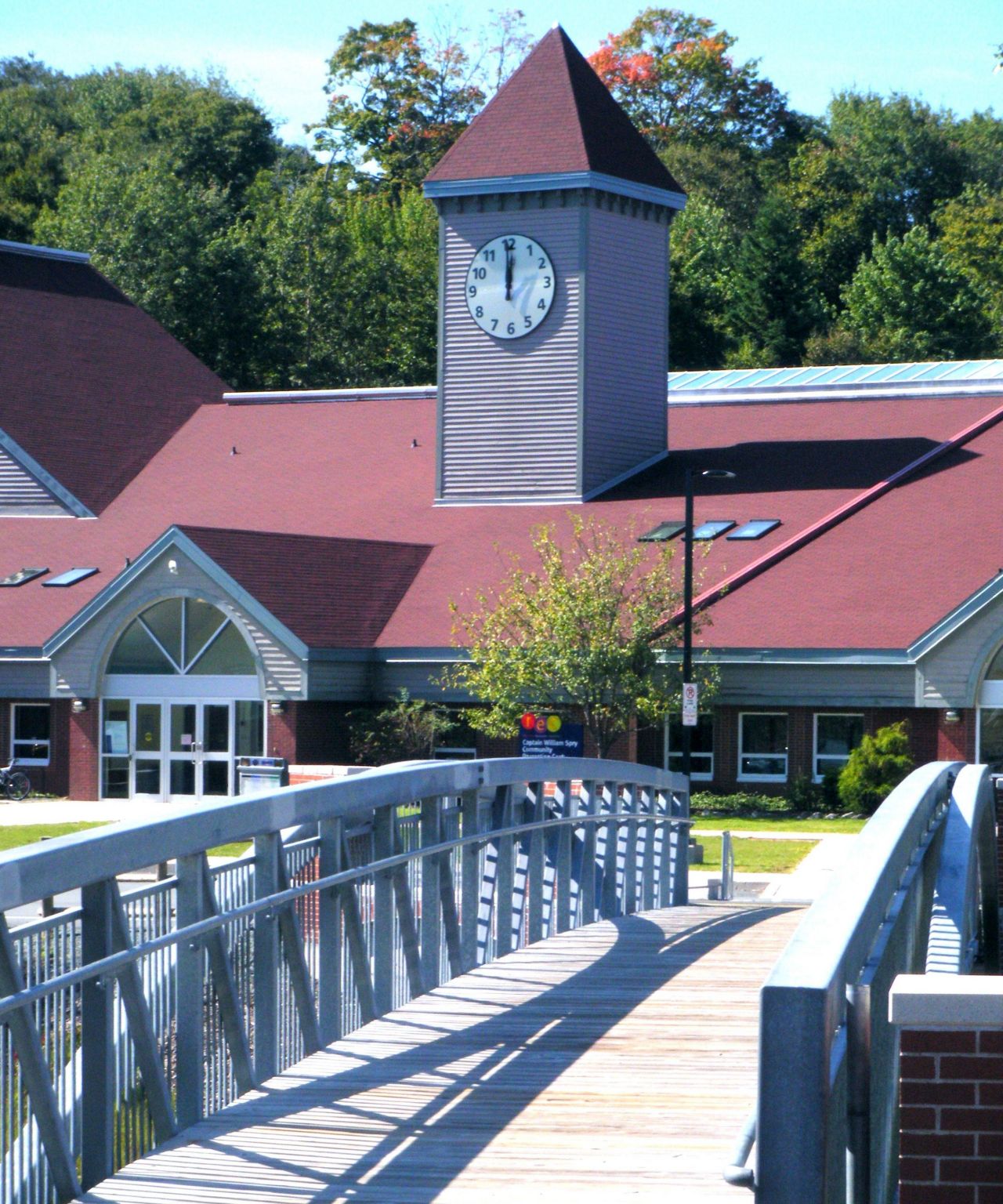 My favourite indoor public clock is in the lobby of the Lord Nelson Hotel. It was made by Telechron, an American company that was an early innovator in electric clock design. 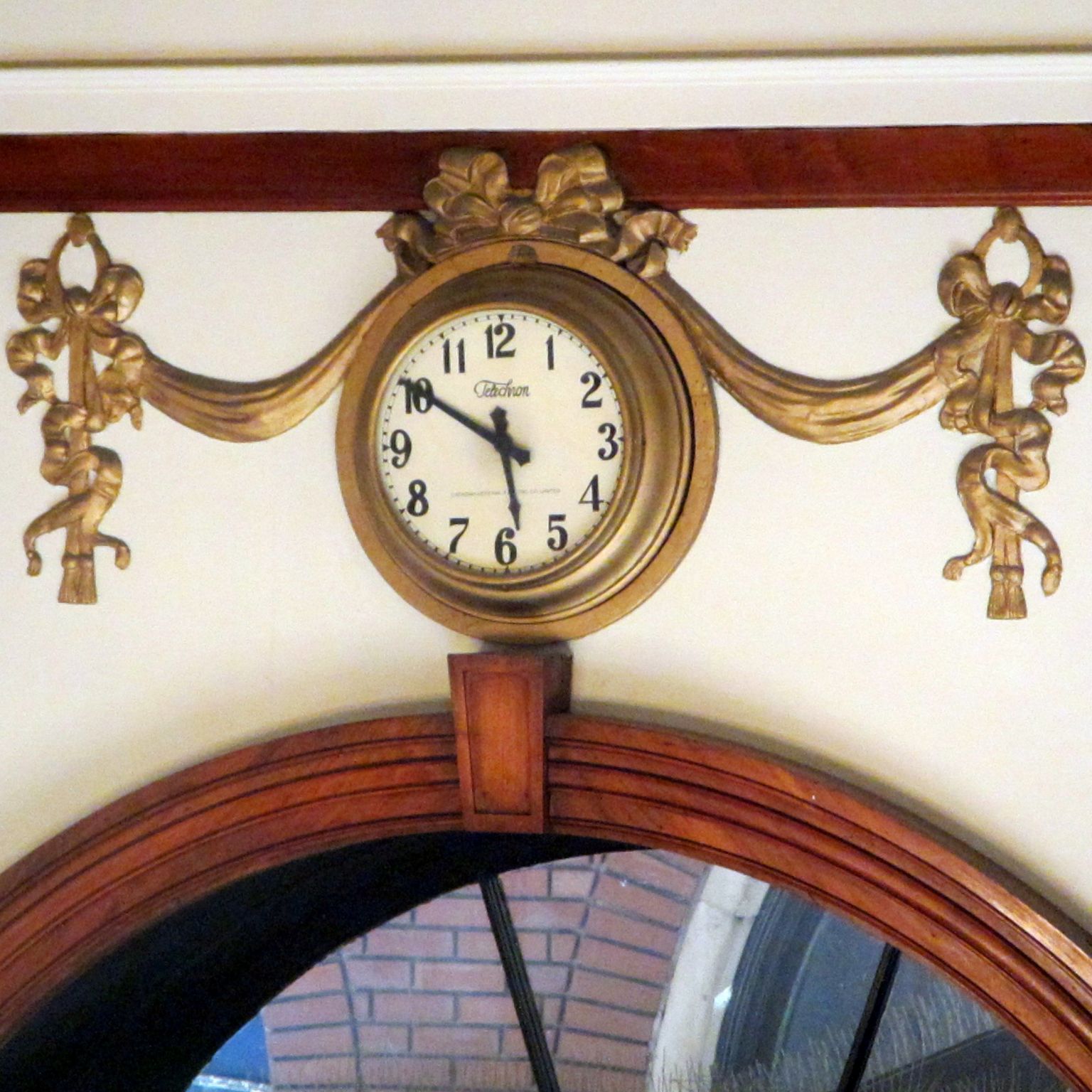 In Search of Lost Time

A location begging for a clock is over the entrance to the train station. Up there are the muse of the steamship and the muse of the locomotive, separated by a round frame that apparently once held a clock. Even a painted clock face with no hands would look better than the void. 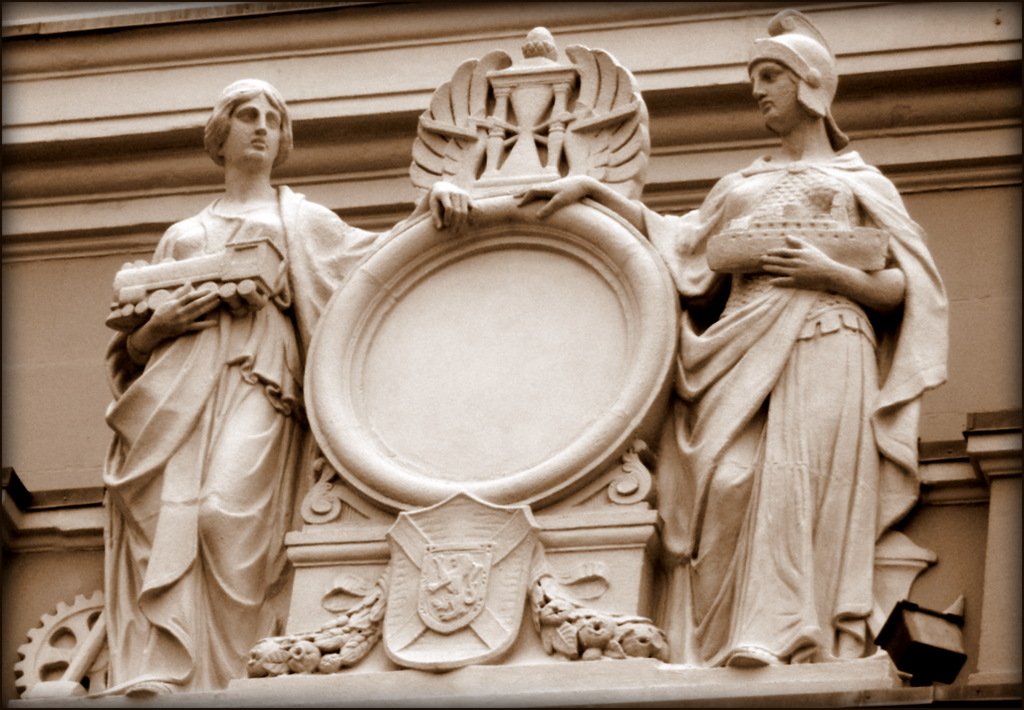 The Customs House at the bottom of George Street had the biggest clock that is not well remembered. My blog on the surprising building is here. 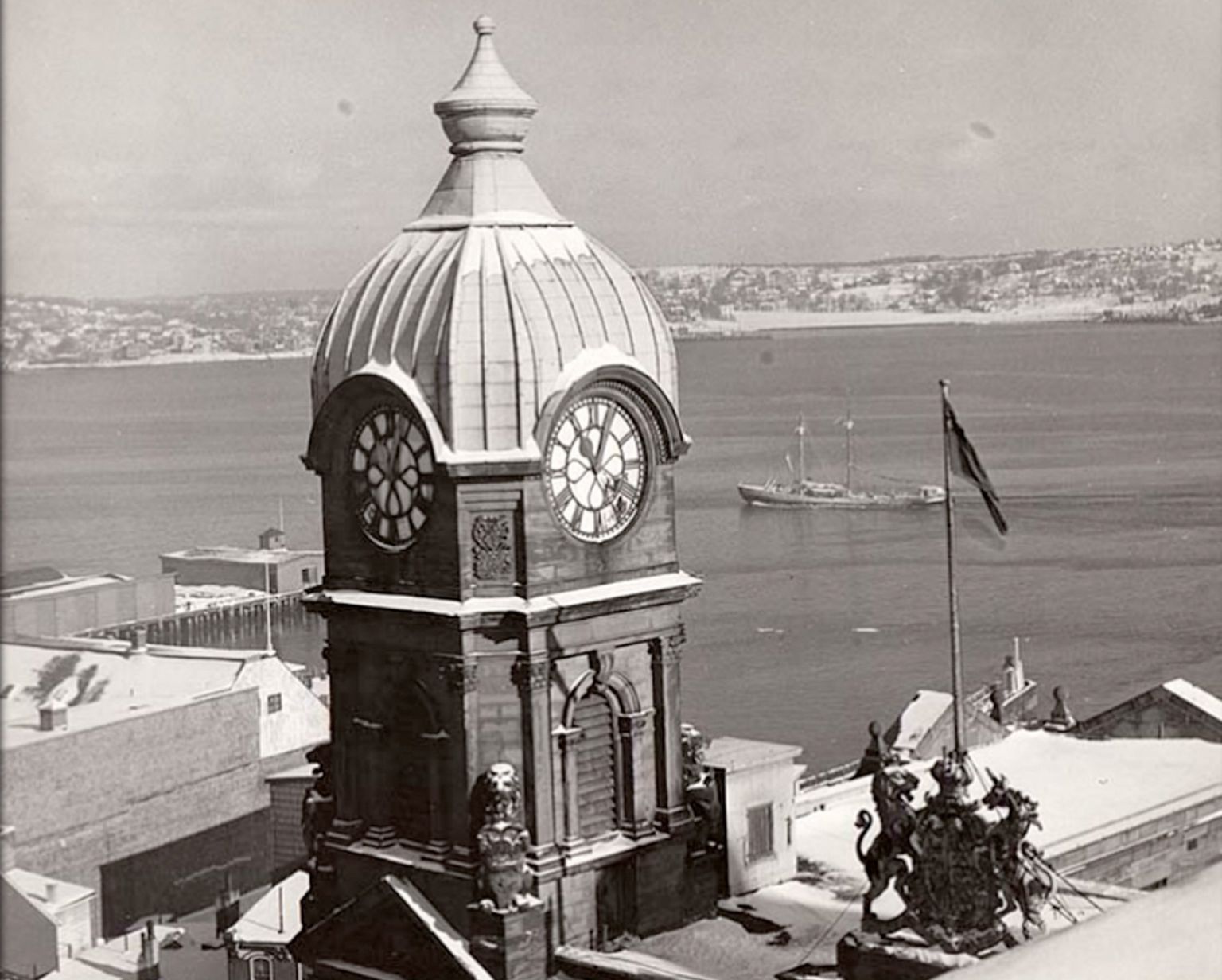 Do any of our new schools have clocks? The Vocational School  on the Halifax Commons had one that had lost its hands by the time I took this photo. 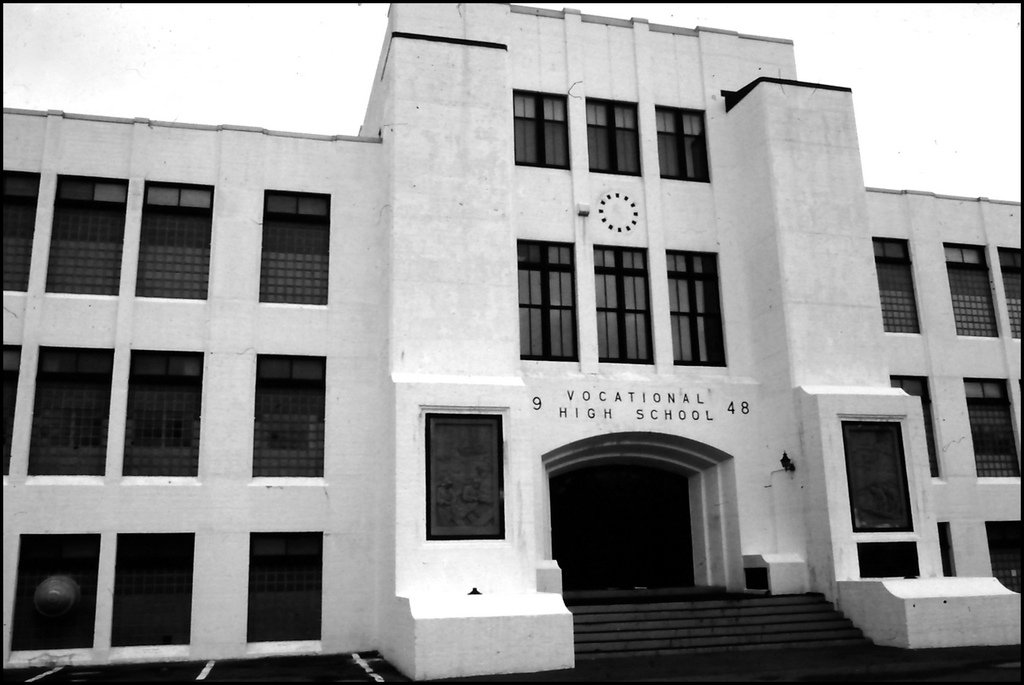 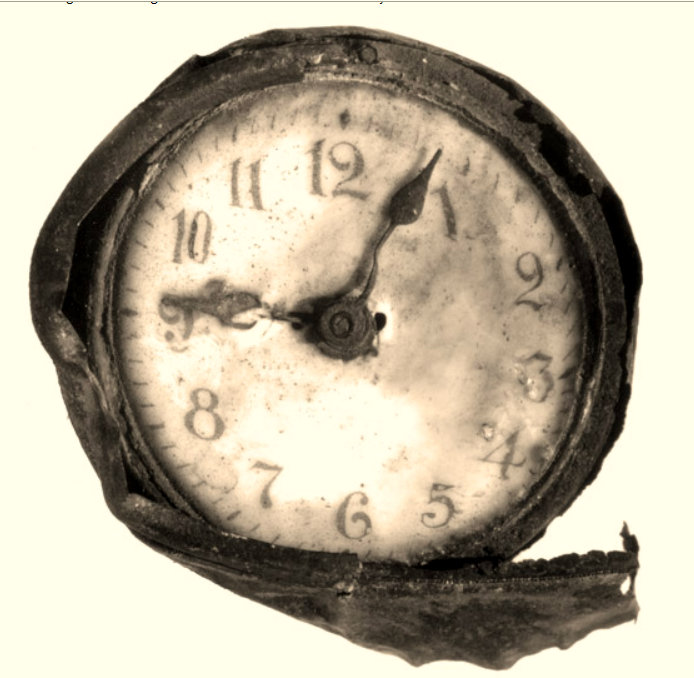 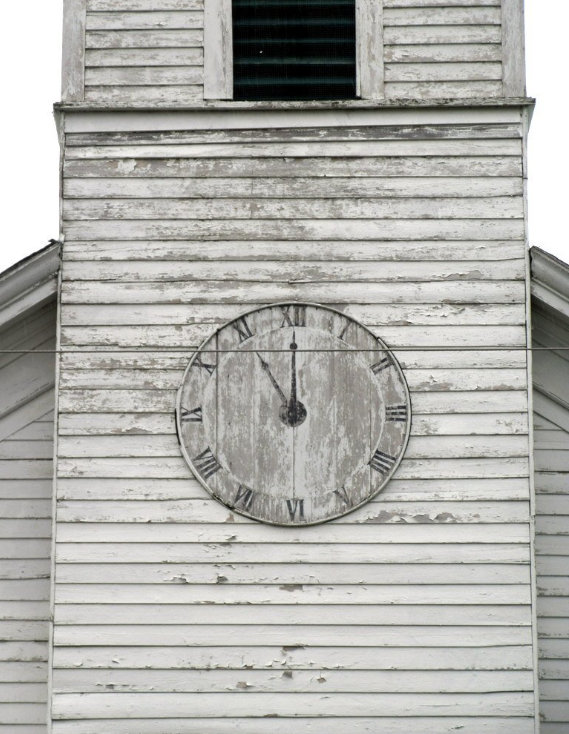 Saint Matthews Presbyterian in Wallace., Cumberland County. As on the Town Clock in Halifax, four is written as IIII instead of the normal IV, because it looks better.

I was familiar with the clock because I was on the planning team for the present Maritime Museum, and learned that in the early 1960s, the museum had been housed in another building in the Ordnance Yard. The museum collected the clock works when the tower was demolished. 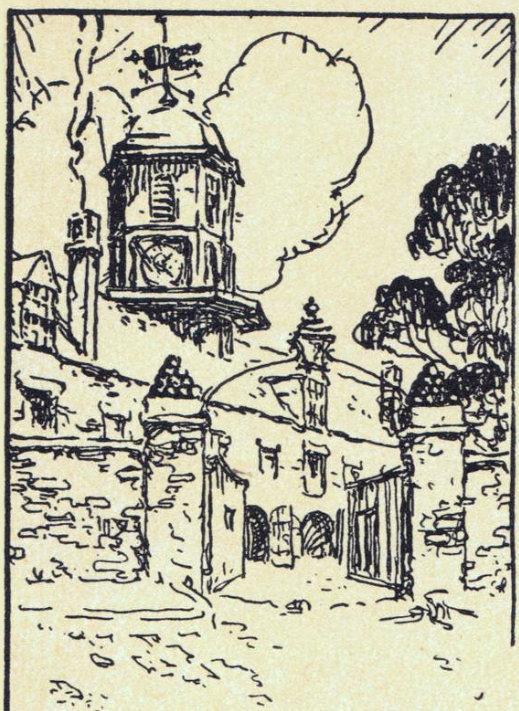 This spirited drawing of the Ordnance Yard clock was by Donald Mackay, who was principal of the NS College of Art and Design 1945 – 70.