We visited Washington DC recently, to improve our cultural literacy. Every night on the news the Capital or the White House appear behind talking heads, now I can imagine the scene just outside the frame. This blog will share some of our DC discoveries, including some ideas we could use at home.

The Capital dominates the surprisingly vast and informal Mall green space. Unexpected were the caravans of food trucks that lined streets, ready to serve “we the people.” We chose tasty samosas and soft ice cream. 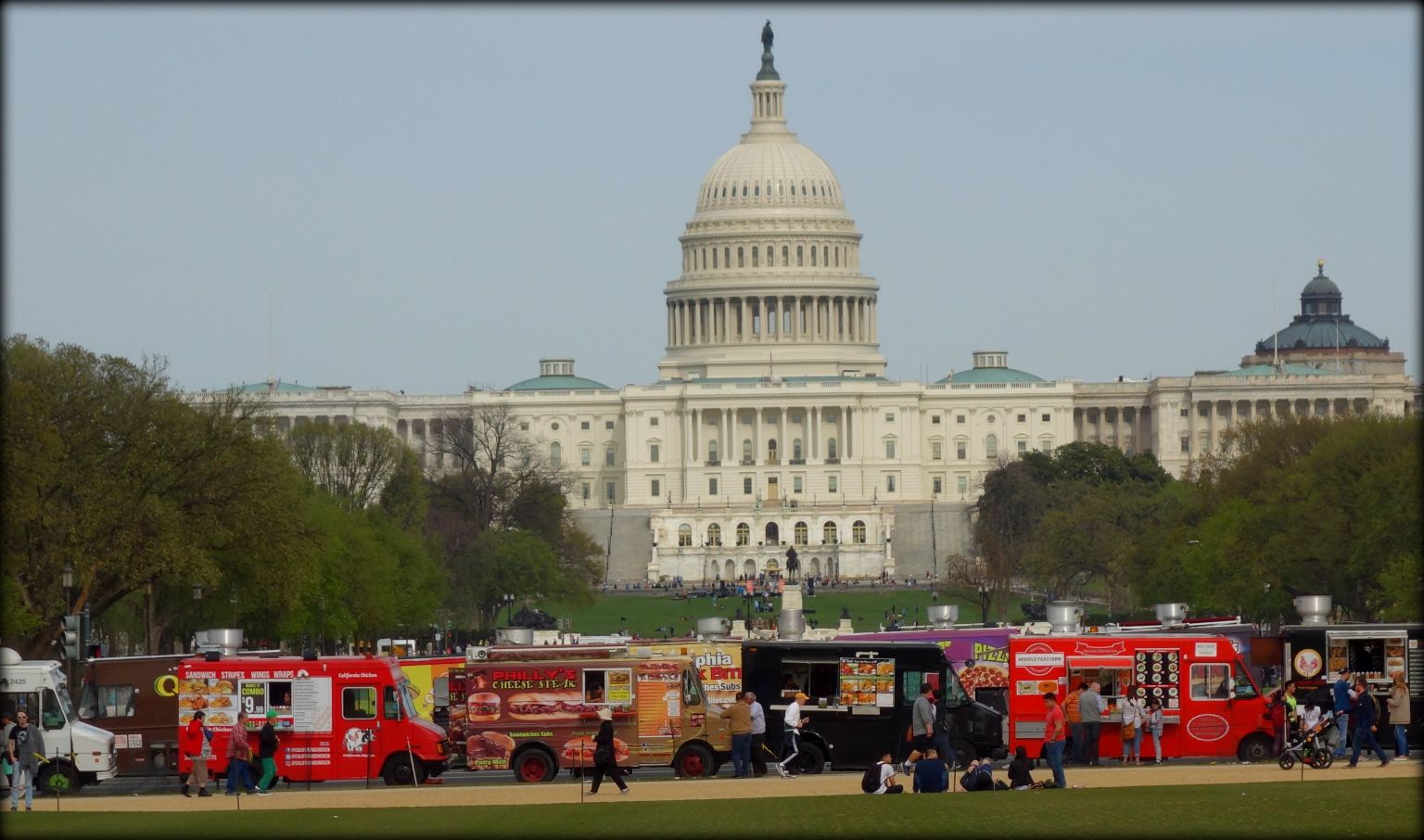 Another surprise: next to the Capital was a botanical garden of native plants. As you would expect in a national capital, this was really well done. Made us wonder, when the giant babies stop parking next to Province House in Halifax, could a garden of native Nova Scotian plants replace the asphalt (and maybe even the Citizen Soldier monument)? Folks from the Irving Garden at Acadia would have the expertise to make us a spectacular native plant garden. 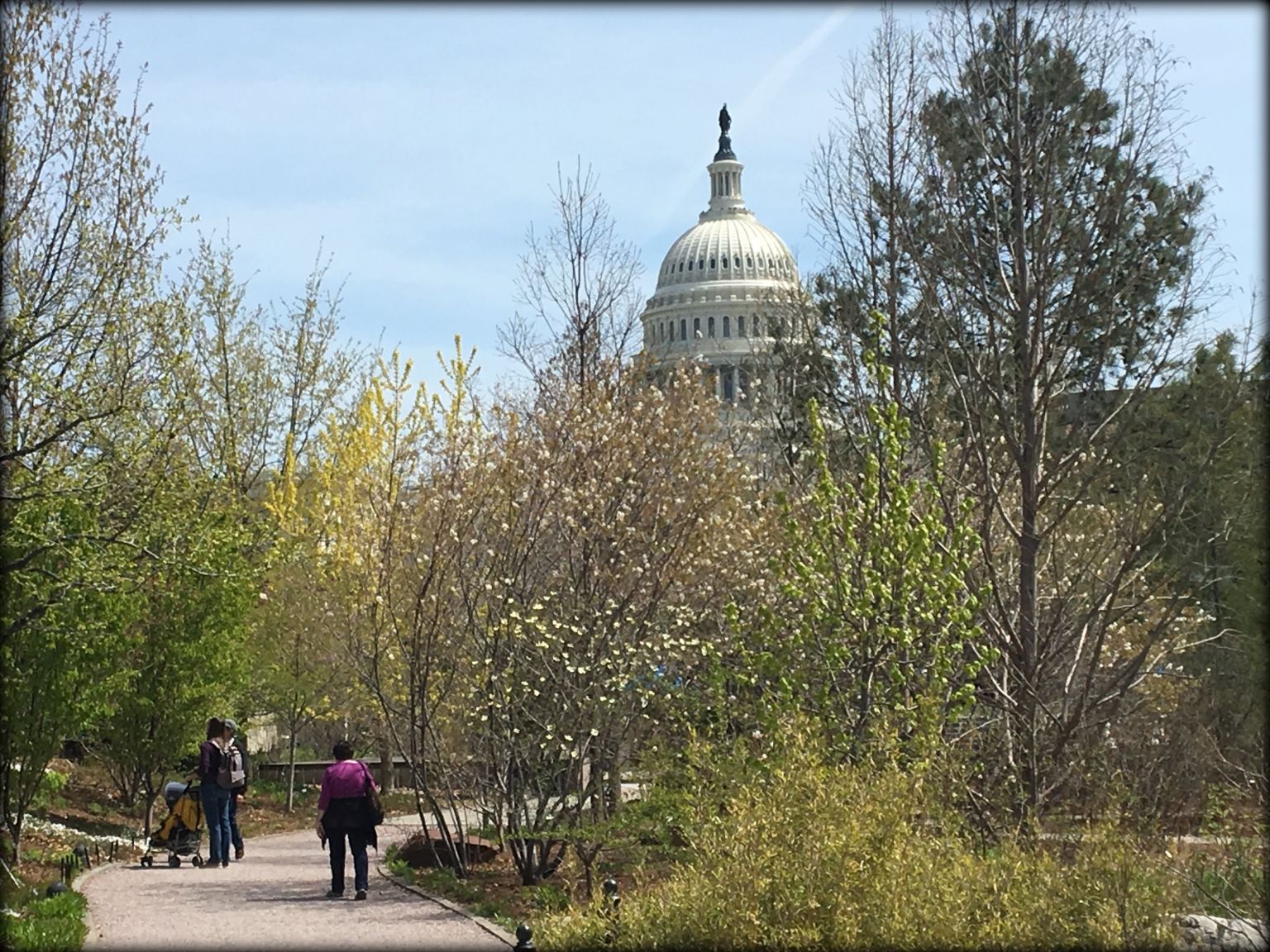 The Mall is lined with Museums, all FREE, and showing all manner of content. Outside the Hirshhorn Gallery was this swell sculpture by Jimmie Durham of a 1992 Dodge Spirit crushed by a volcanic boulder. About 20 meters away was a food truck that also felt like a work of art. The formal and the informal comfortably coexist in Washington. 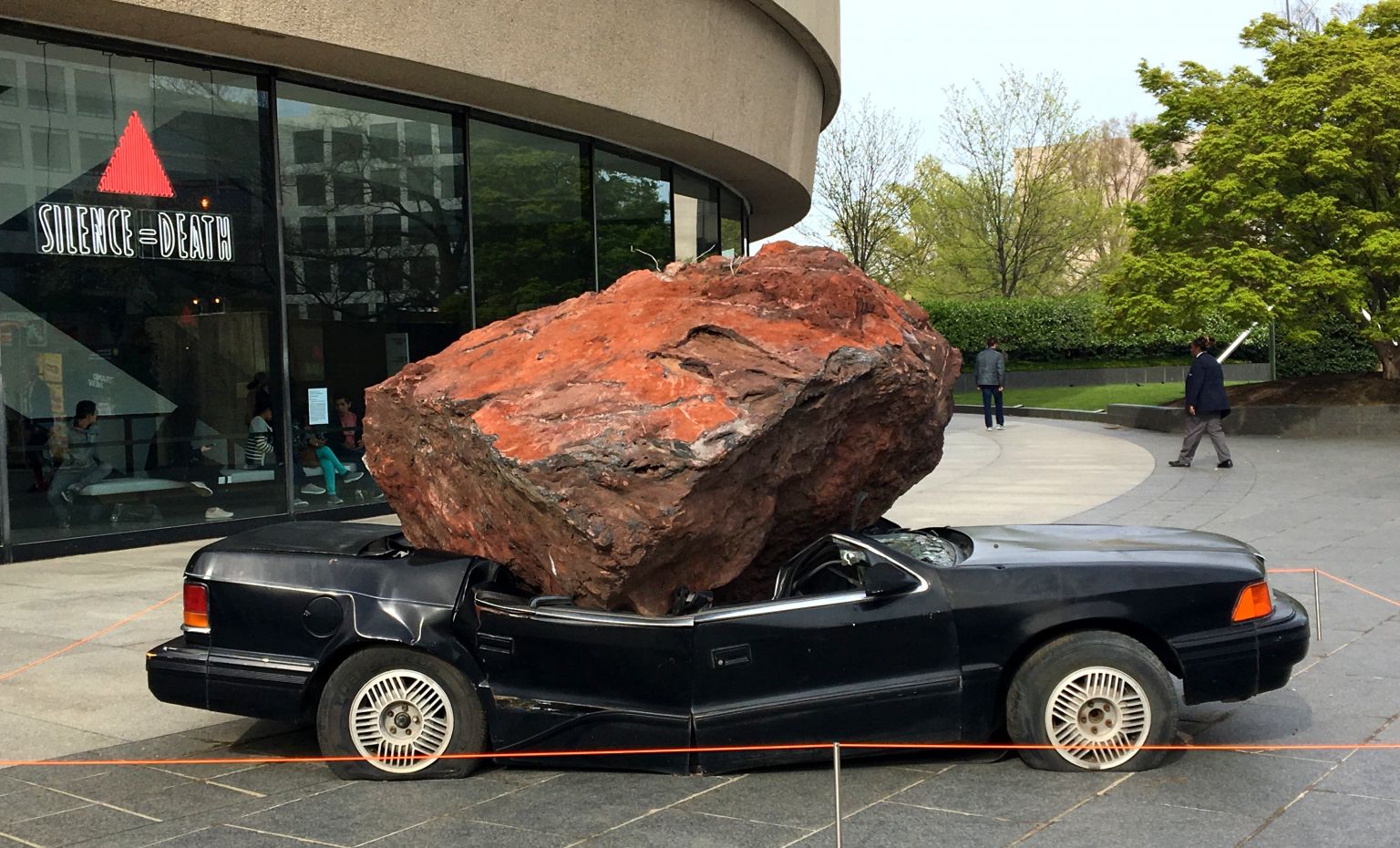 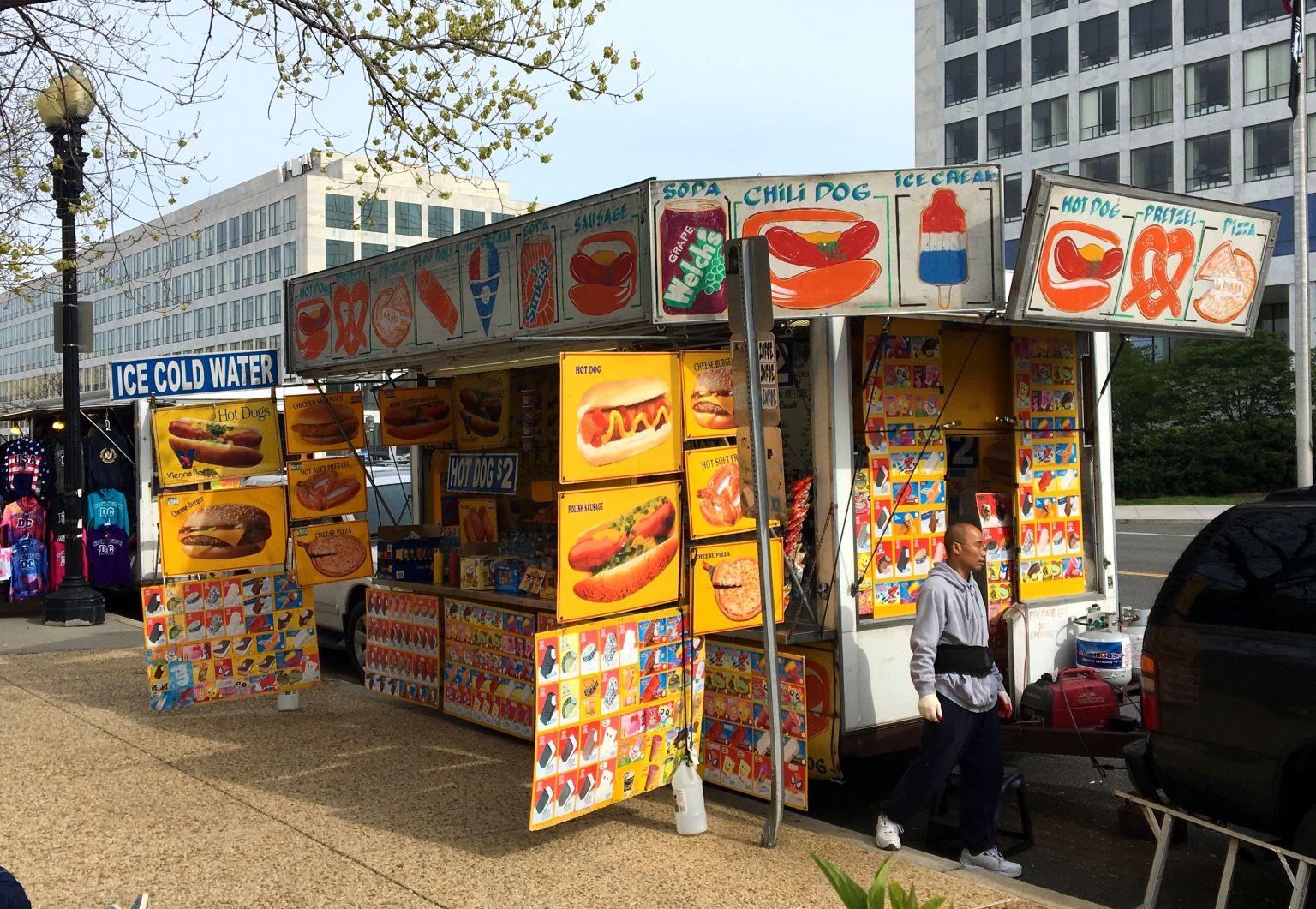 I’m surprised how much I enjoy portrait galleries. Hope that the Art Gallery of Nova Scotia is consciously collecting in this field. We sought out the recently revealed, official portraits of the Obamas. People were lining up to have their pictures taken with the paintings. What portrait of a Nova Scotian political figure would you want to selfie with? Sir William Fenwick Williams perhaps? Angus L MacDonald? 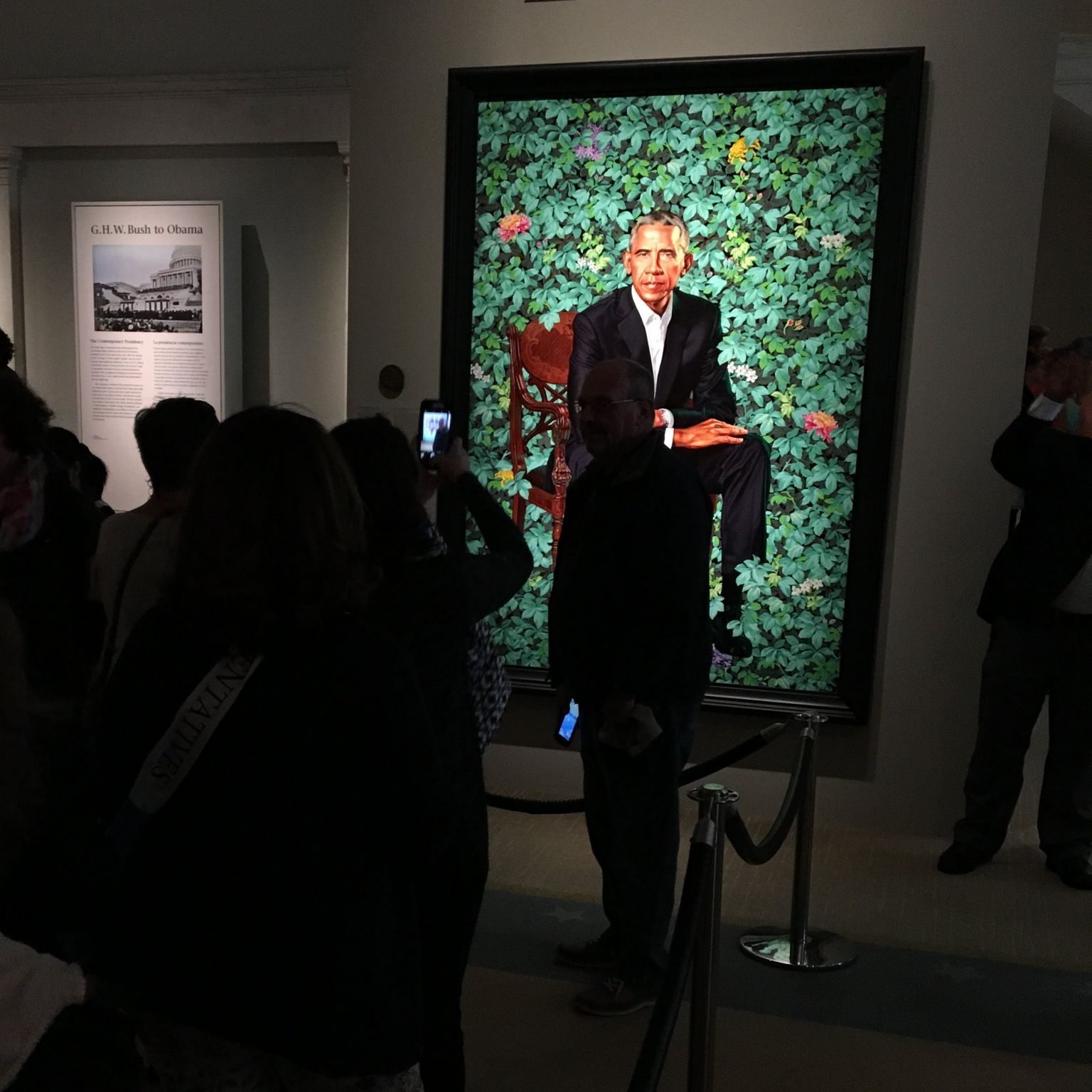 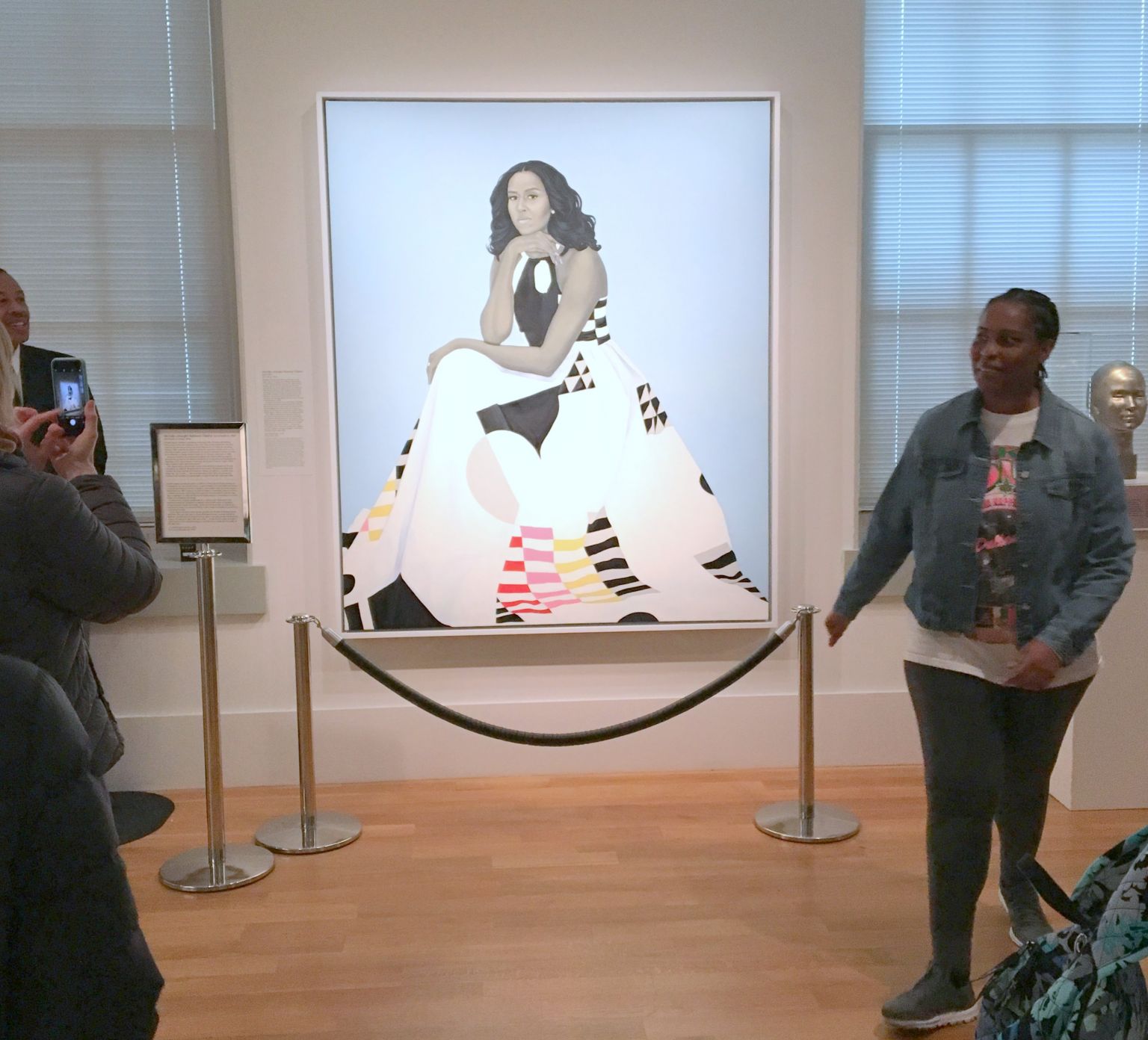 Gertrude Stein, looking a little like the Buddha, demonstrated that portraits come in many forms. 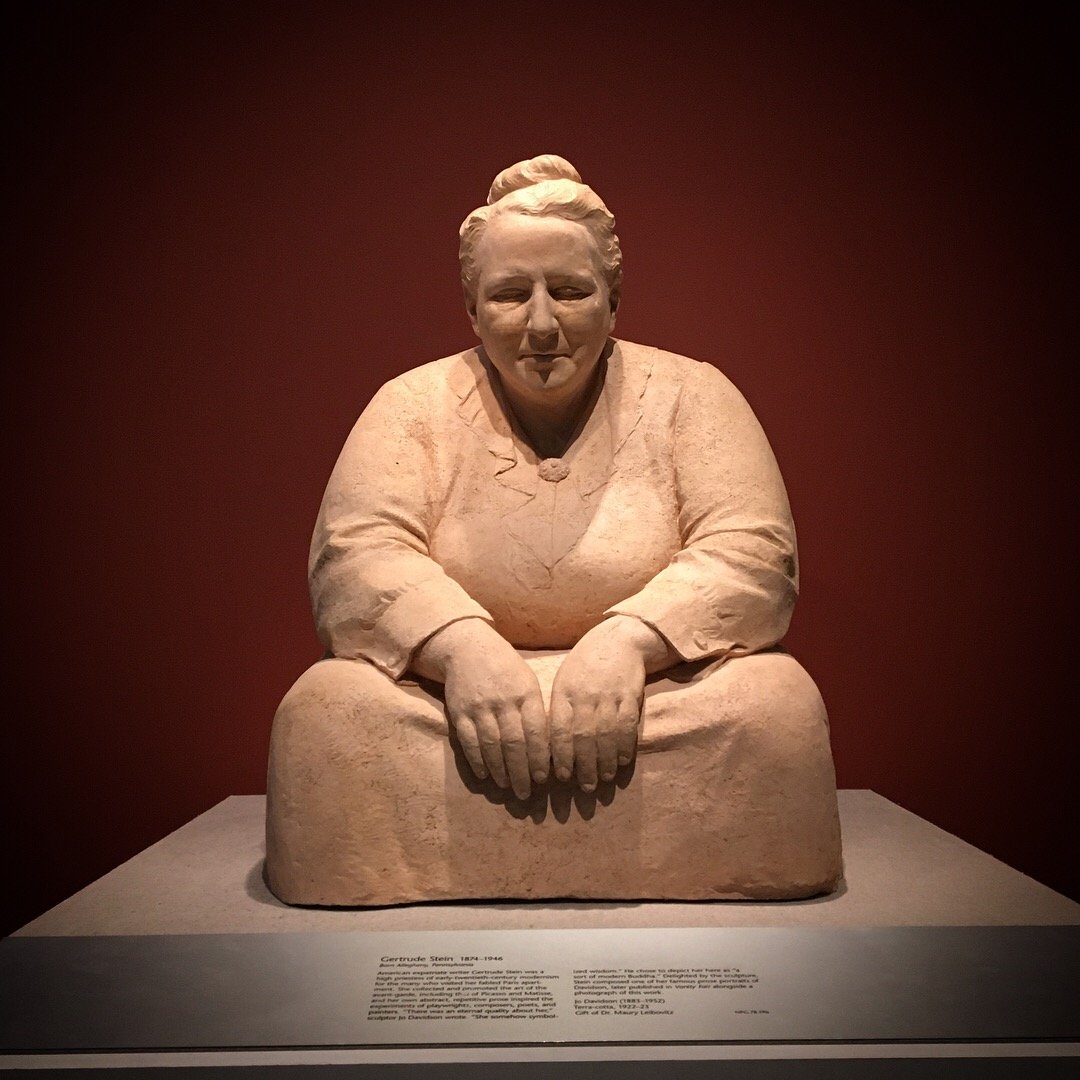 The only destination, contemporary architecture on our list was the National Museum of African American History and Culture that opened in 2016. It is clad with a complex patterned metal grill. Very dynamic in the late afternoon sun. It’s wildly popular so you need a timed (free) ticket to visit. 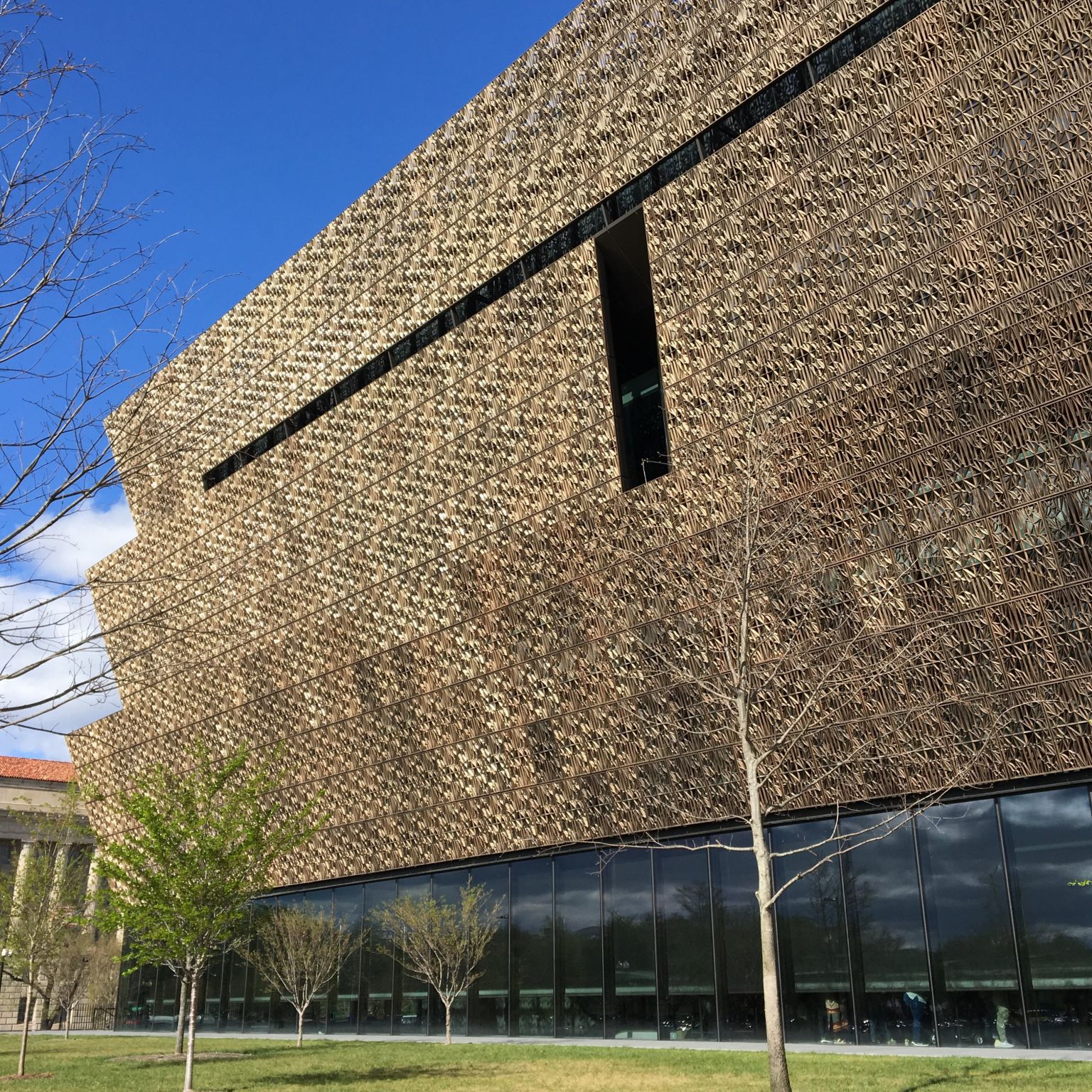 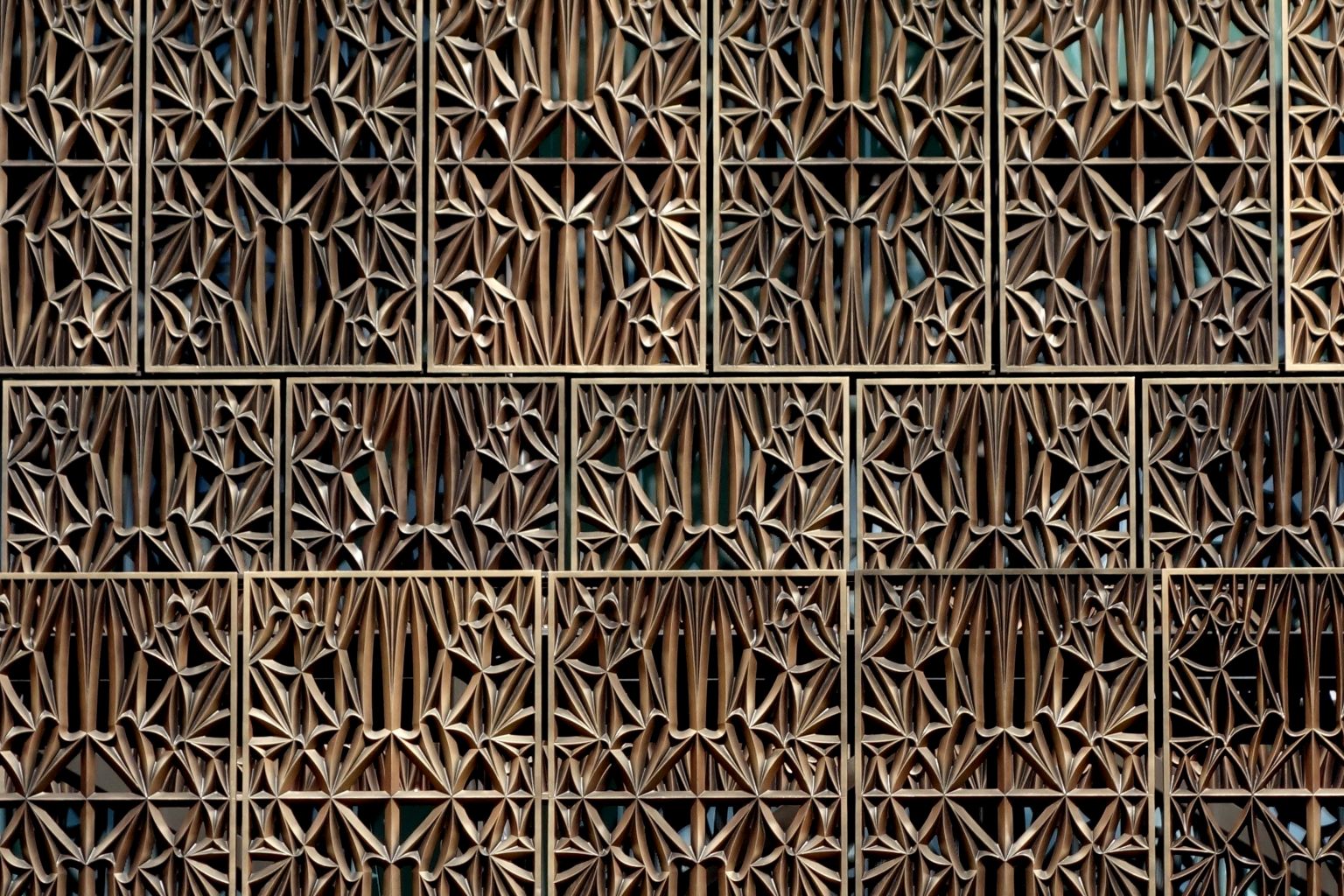 The zoo was not originally on my radar but then Sheila said pandas, and I learned the zoological park was originally designed by the Olmsted family in the 1890s. Today everything is up to date. We visited on a cool morning and the pandas decided to stay inside. An hour later we happened by as one made its entrance by somersaulting down a slope, then climbed into an elevated sling to look at the adoring fans. 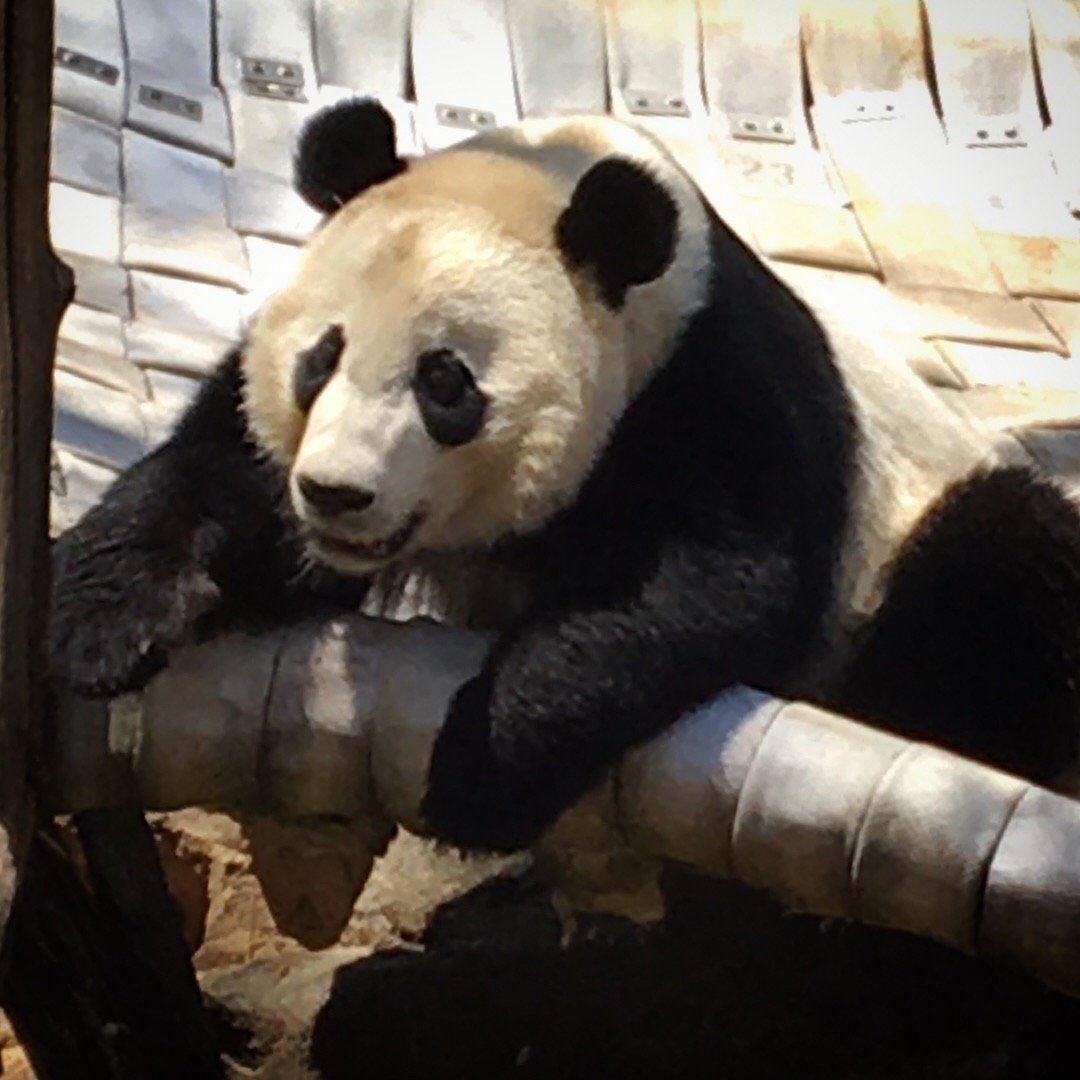 The uncanny large primates went about their business without paying much attention to us. 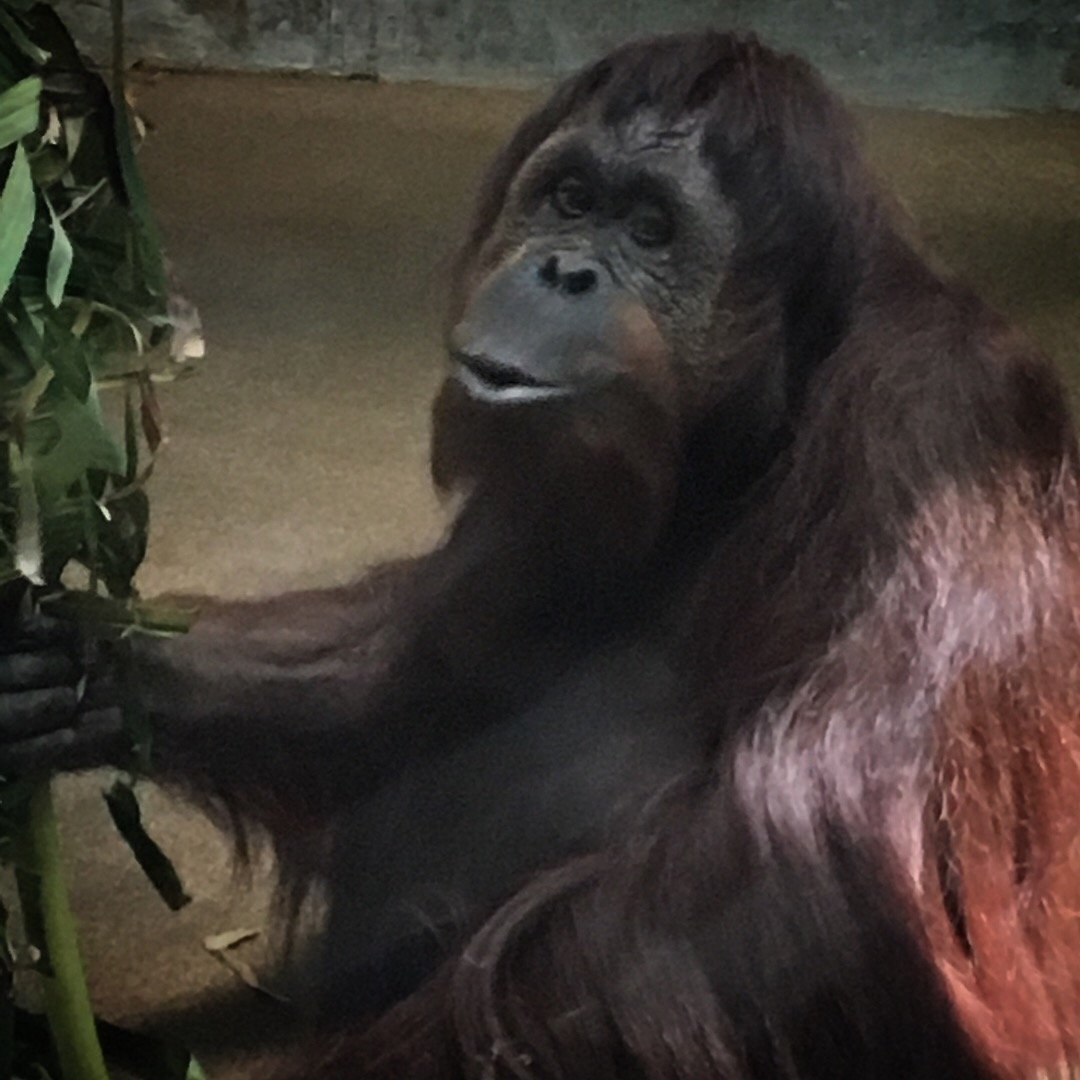 As you would expect, there are lots of security measures in Washington. These Jersey barriers in front of the Freer Gallery of Art show that temporary/ permanent concrete barriers can have some styling. 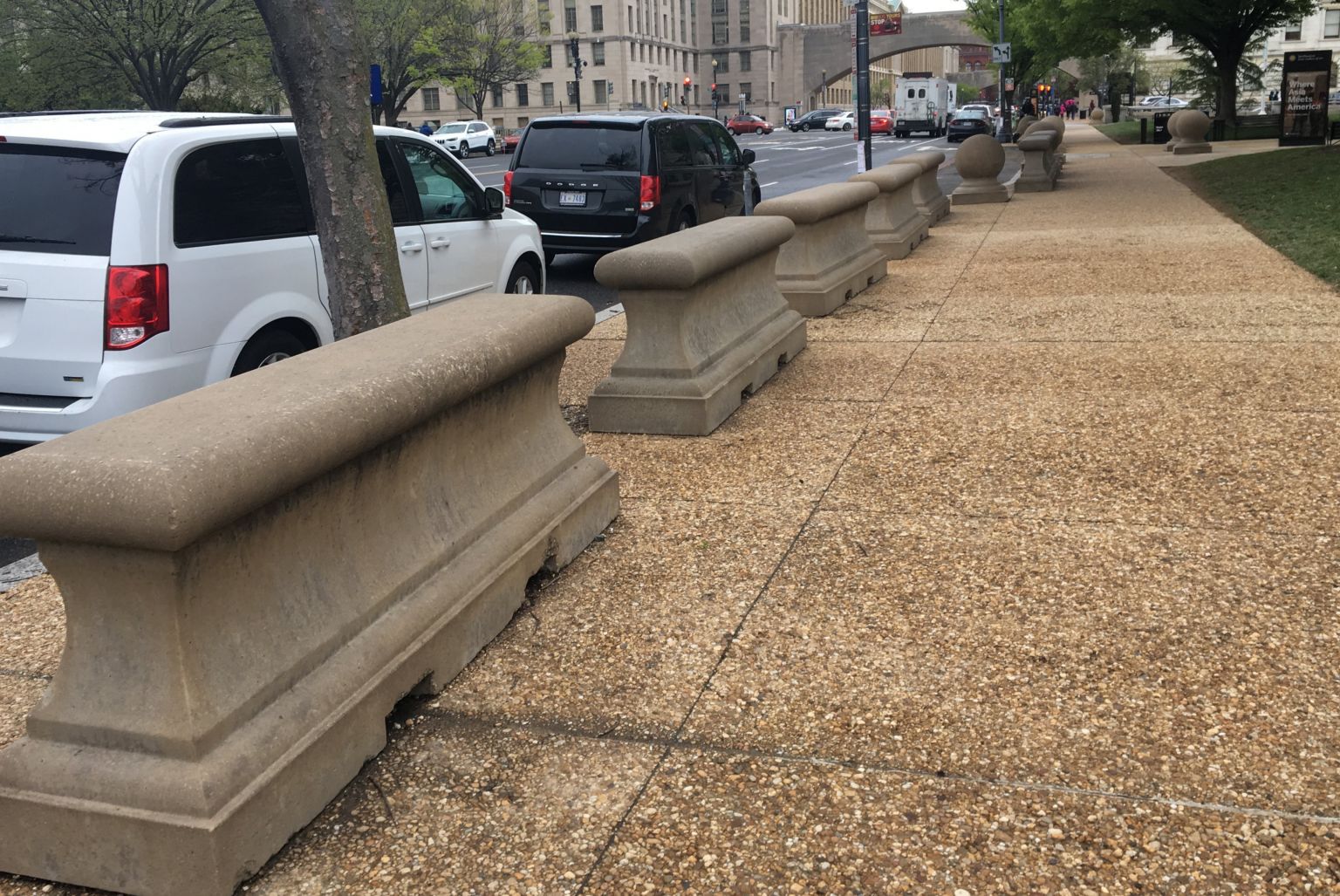 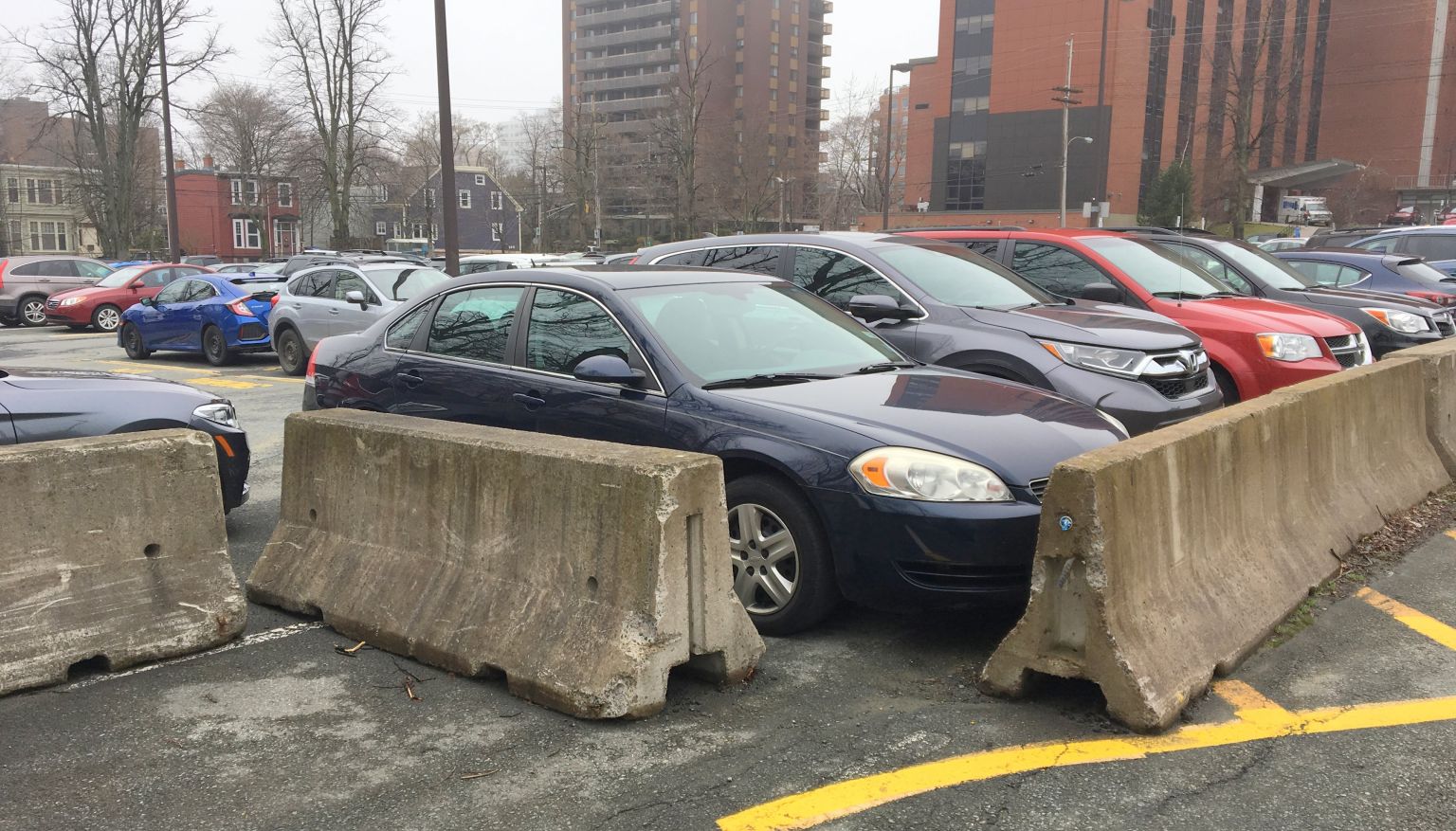 This fountain in the sculpture garden in the Mall, surrounded by a rim designed for sitting, made me think of all the fenced fountains we have in Halifax, designed to keep people away (sometimes it feels like personal injury lawyers will inherit the earth).

The exuberant 1986 Washington Harbour project on the waterfront in Georgetown is a style described as “industrial baroque.” Washington has many robust buildings from the last third of the 20th century that may improve with age. 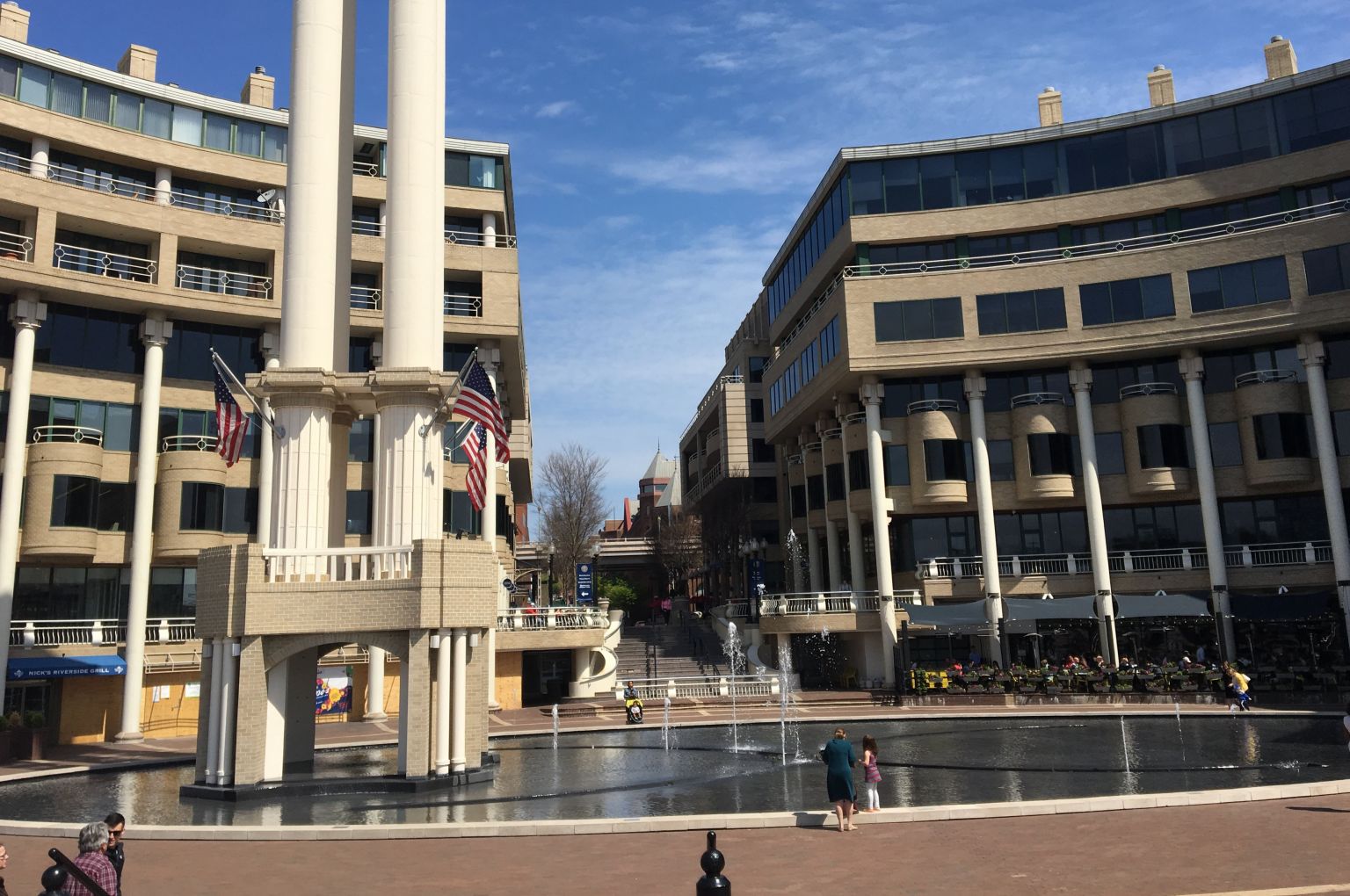 Along the edge of the project that faces the Potomac River are a line of columns to support floodwalls that can be raised out of the deck, when there is danger of high water. Maybe we will someday see similar contraptions on our Halifax waterfront. The internet is full of pictures of what happened on occasions when the barriers were not raised in time. 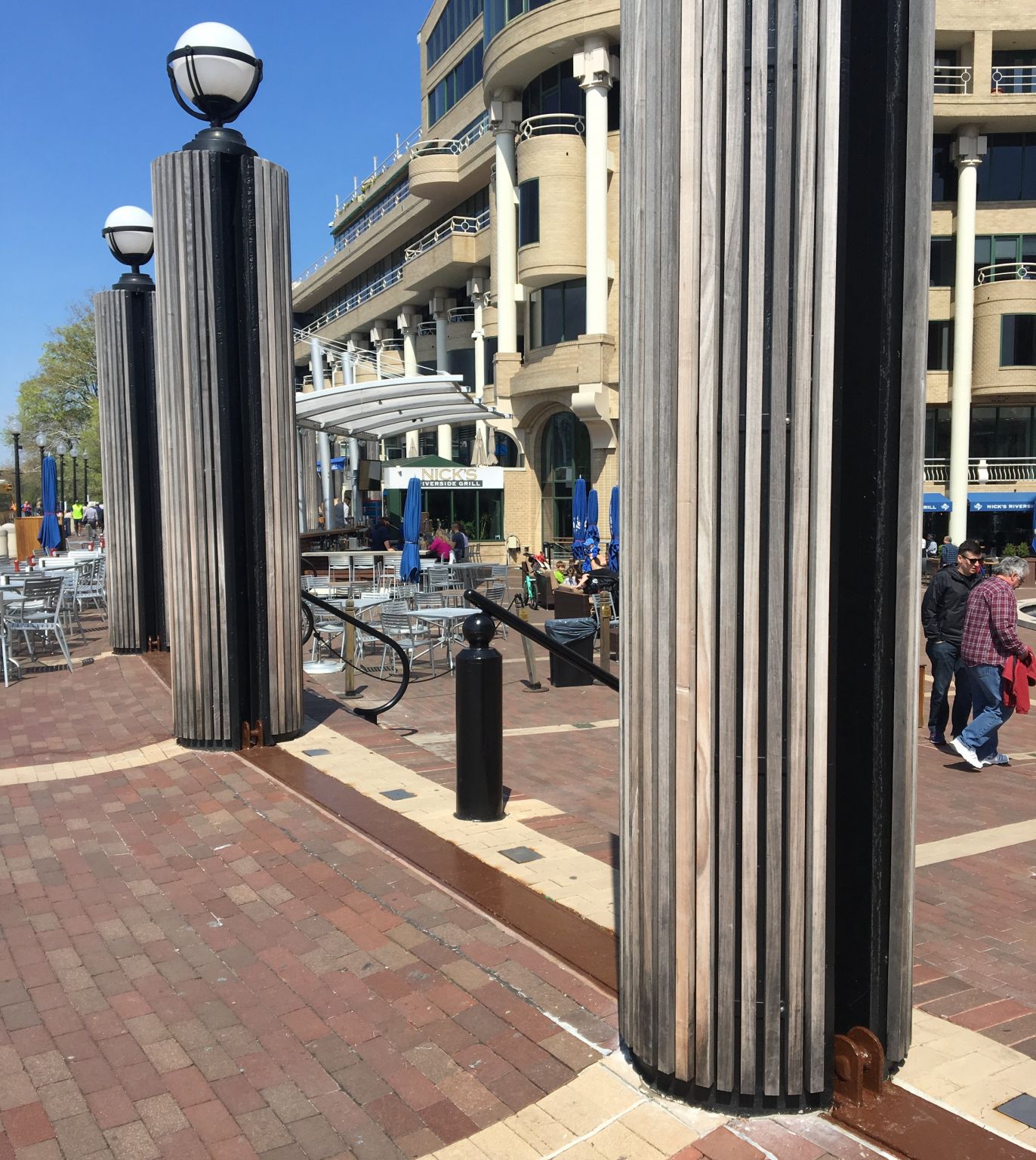 The Watergate Complex has always looked dreary in the photos I’ve seen over the decades. In real life it had a jolly, retro feel (built between 1963 -71). Fun fact: it was designed by an Italian architect who was a favourite of Mussolini. Think of that when “gate” is added to the next petty scandal. Spy-gate for example. 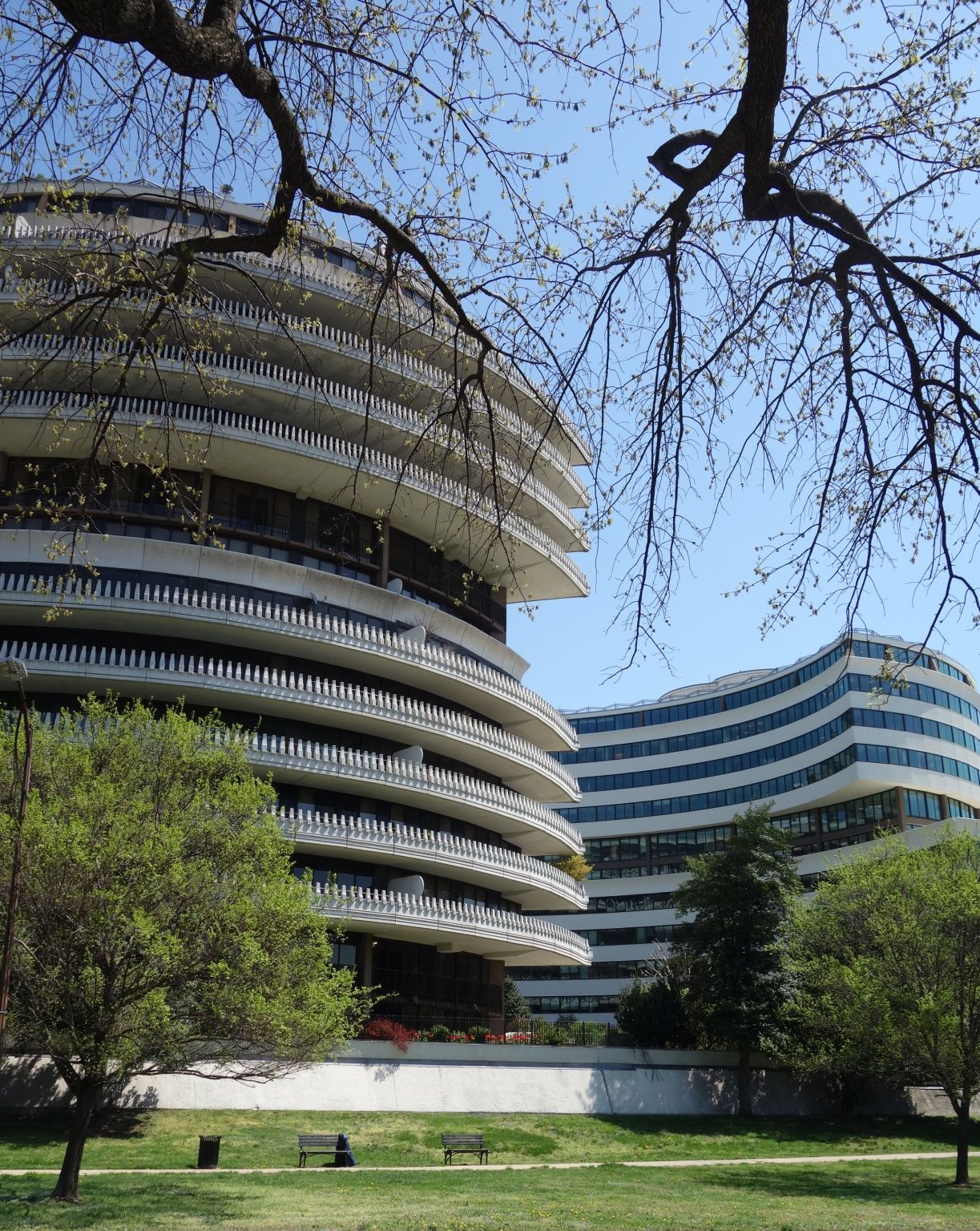 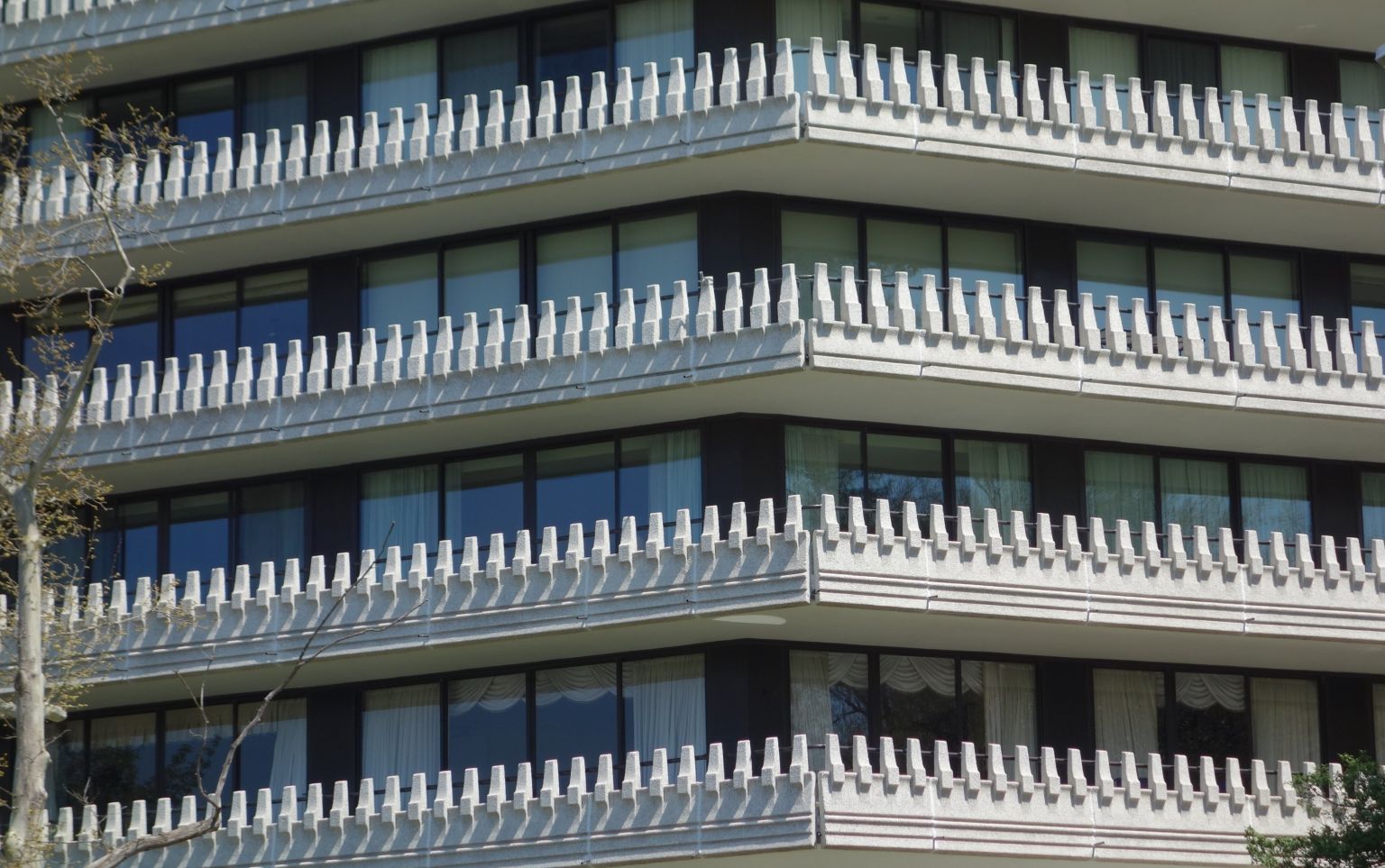 Ceiling grids were a theme we noticed: the courtyard at the Portrait Gallery, a Metro Station, and the Union Station. 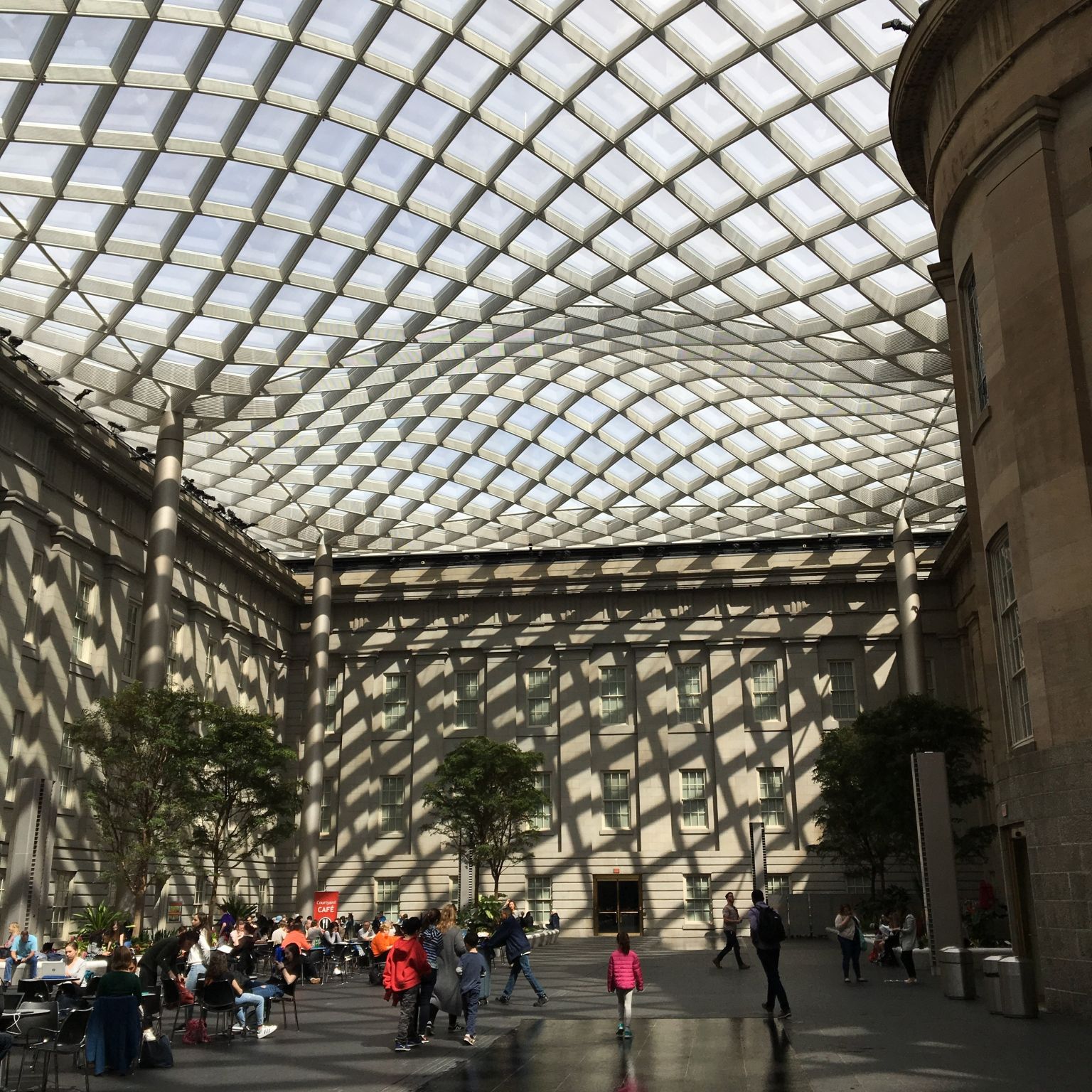 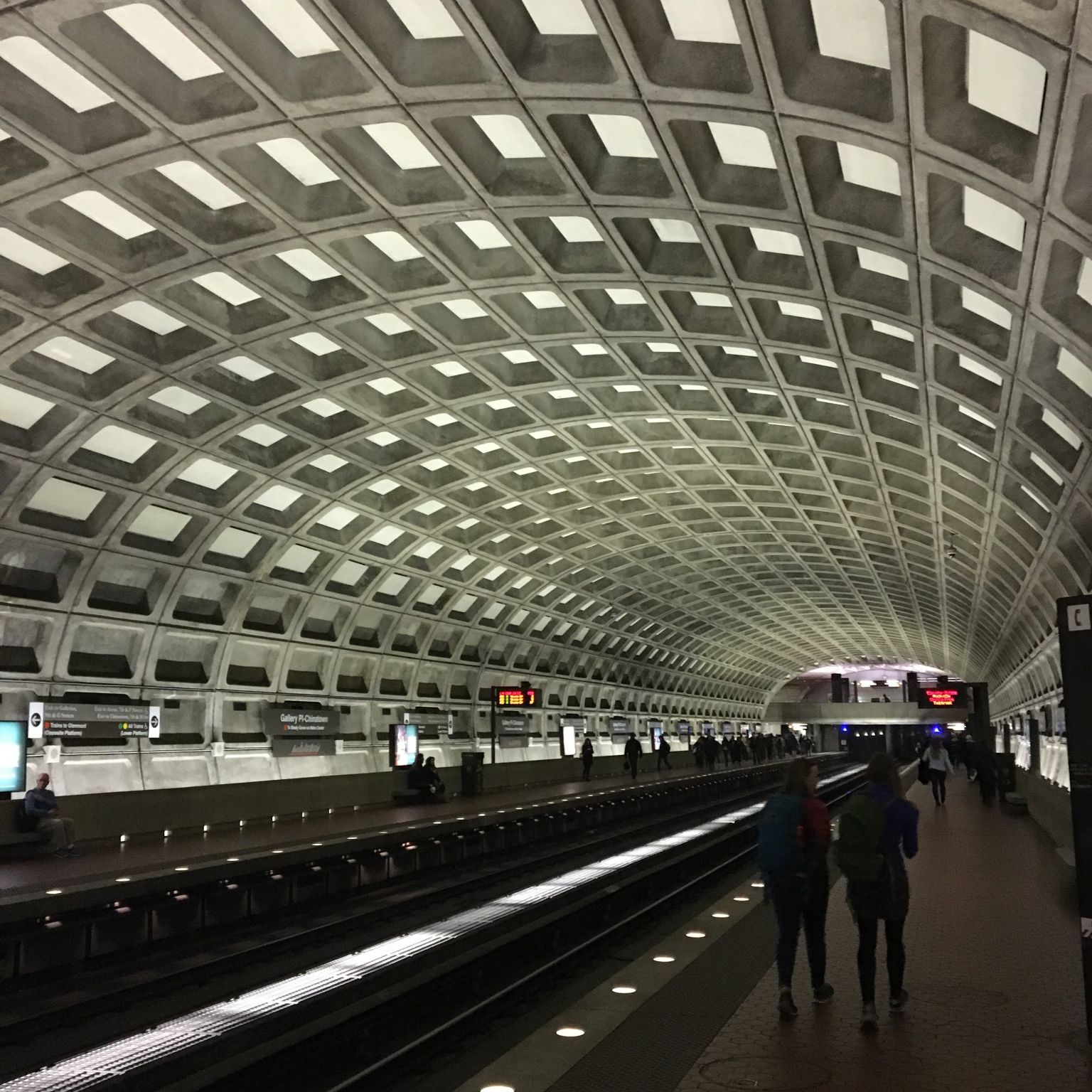 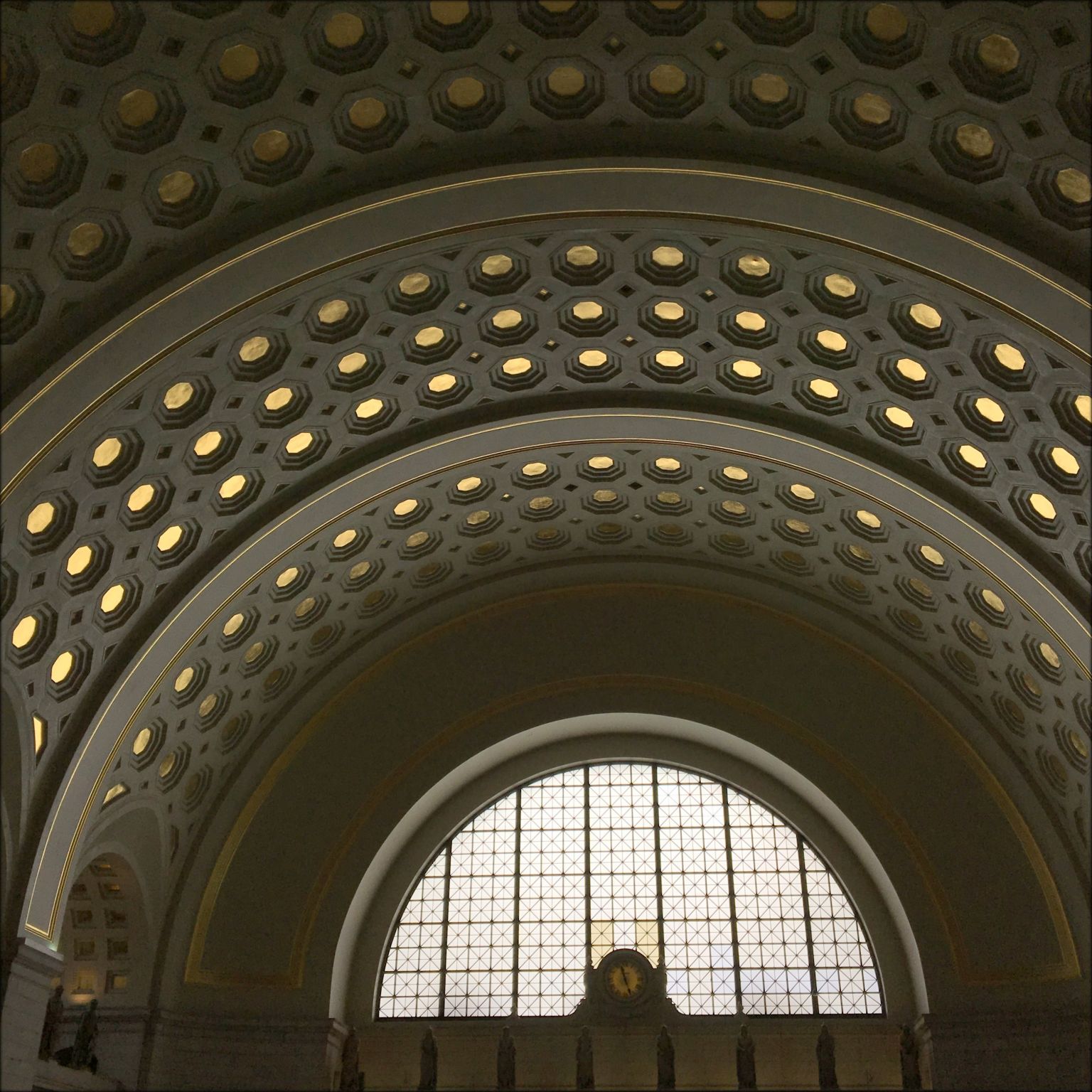 We spent most of our days looking at museums and monuments in the formal centre of Washington, but we chose a hotel in Georgetown because it sounded like a fun, walkable district, with lots to notice. It was a good choice. 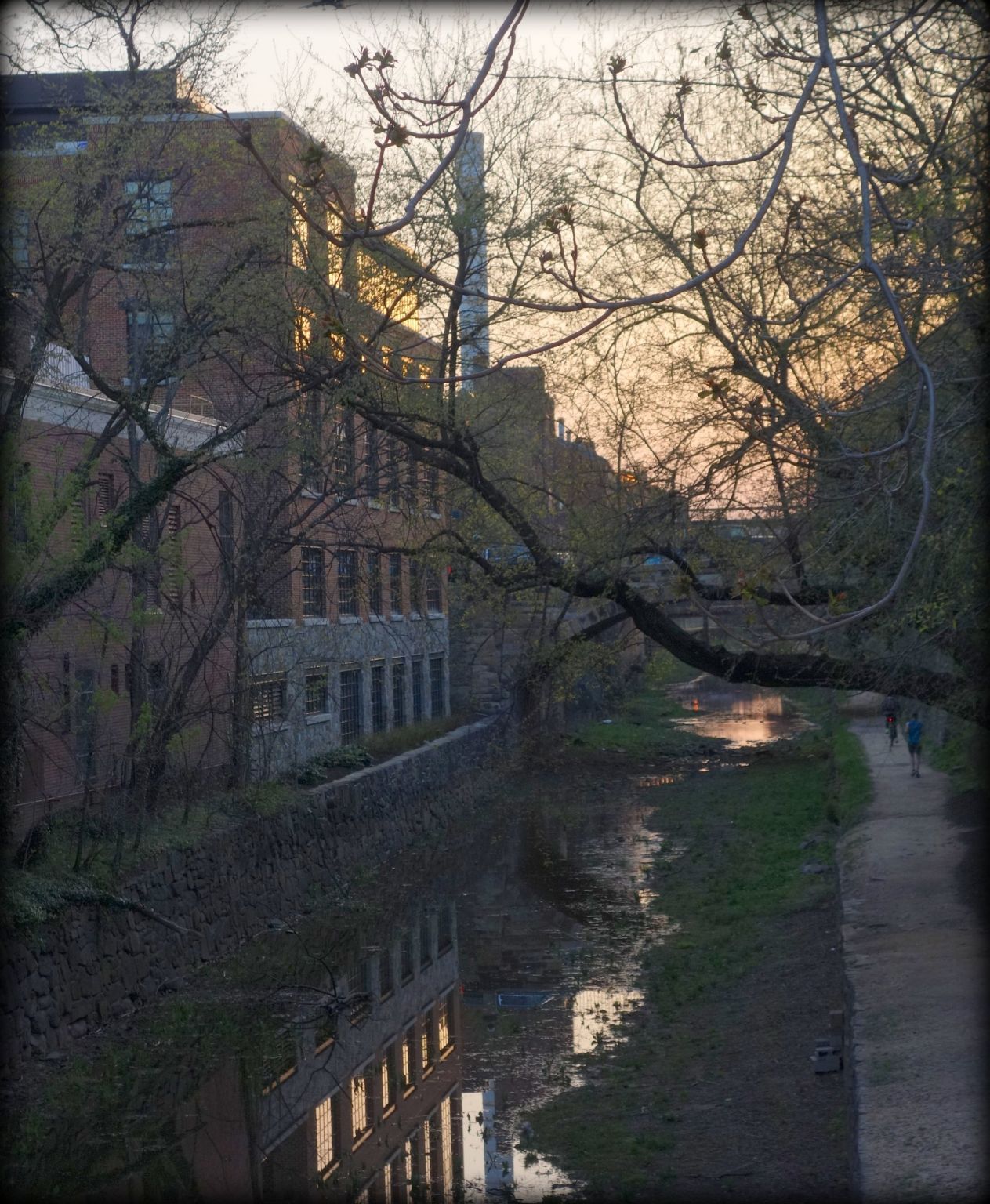 The Chesapeake and Ohio Canal was just down from our hotel. The towpath pasted re-purposed industrial buildings. 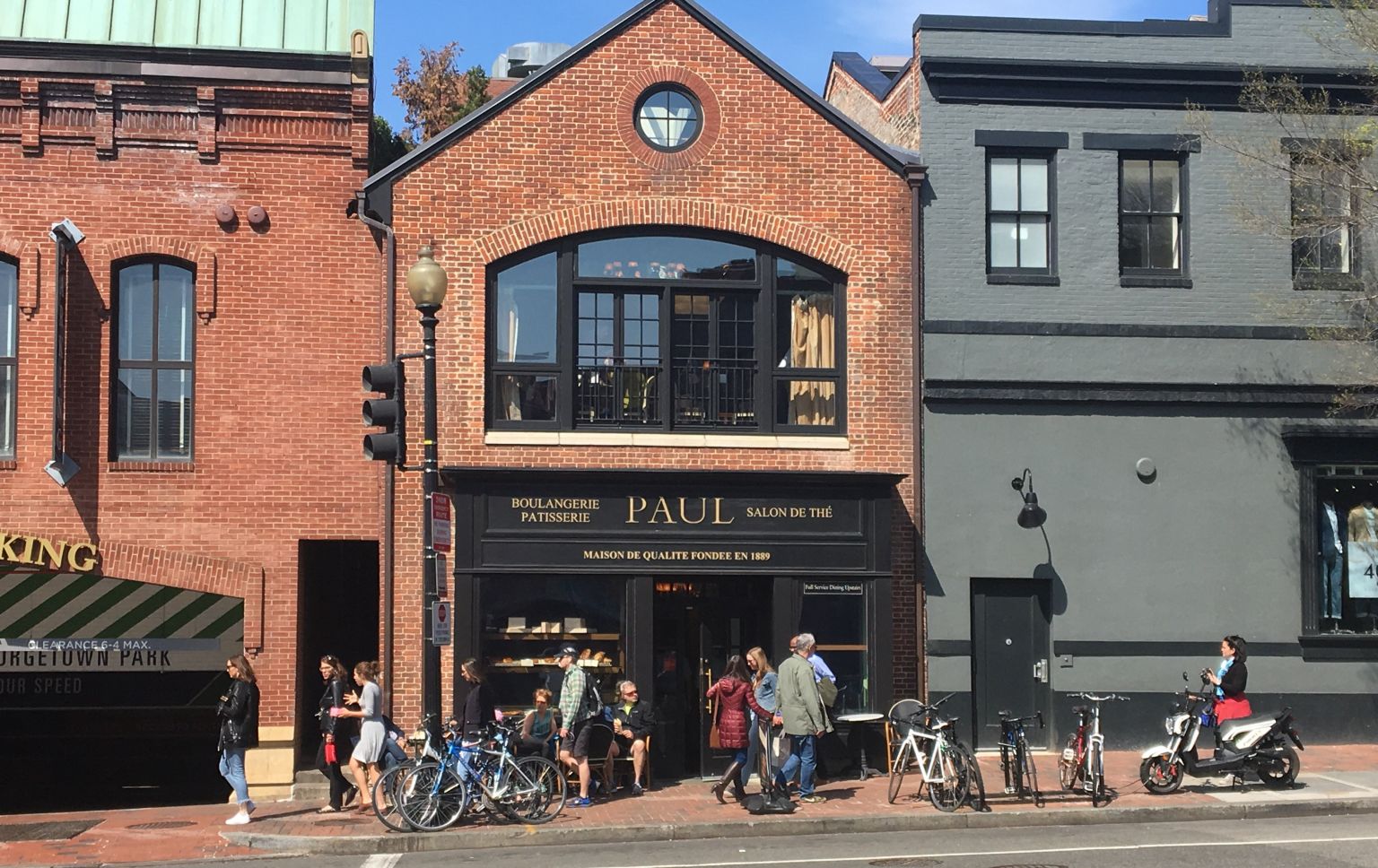 This scene felt like a promotion for active transportation. Also a very good French bakery. 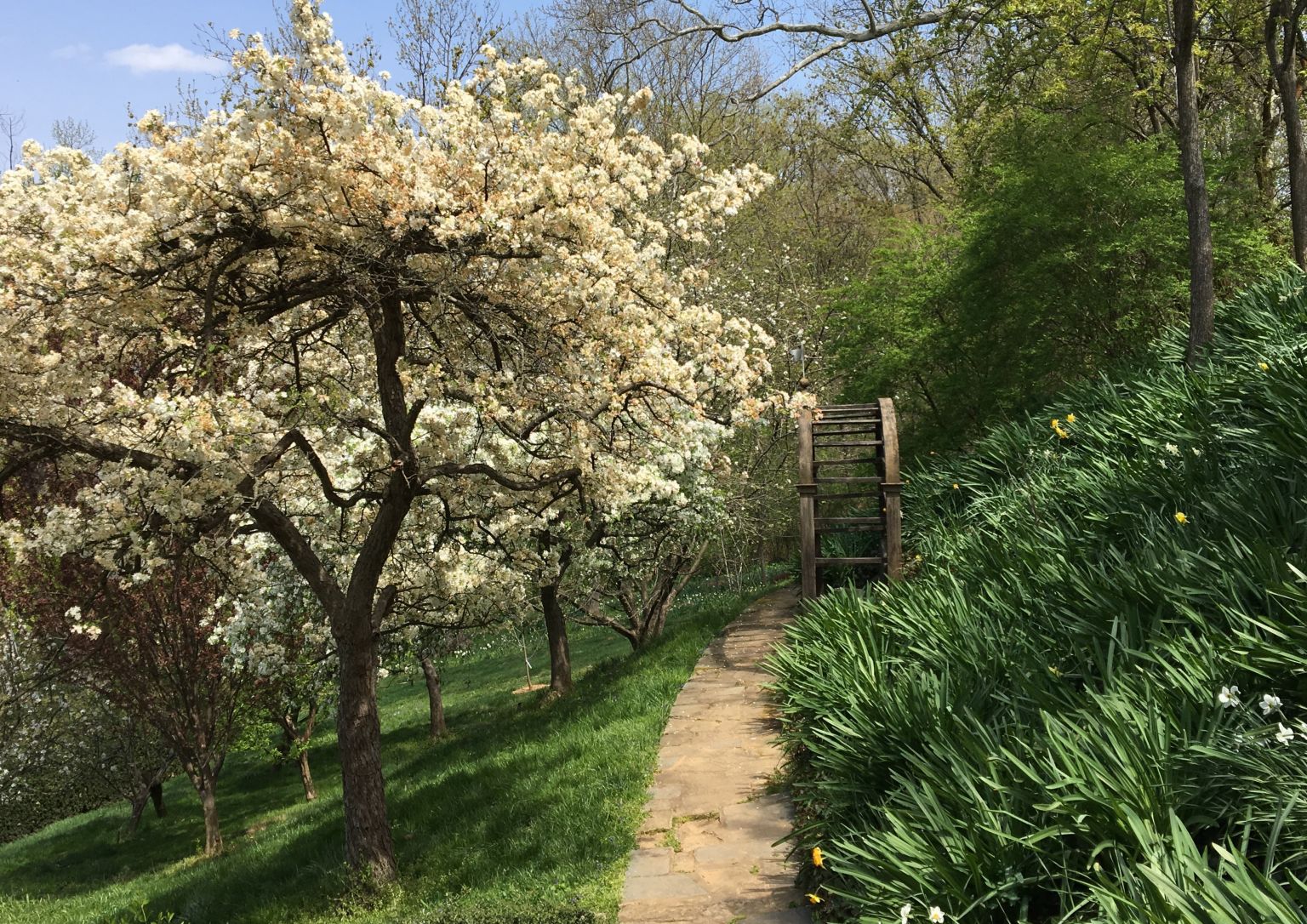 Visiting thee gardens at Dunbarton Oaks was a lifetime achievement for us. 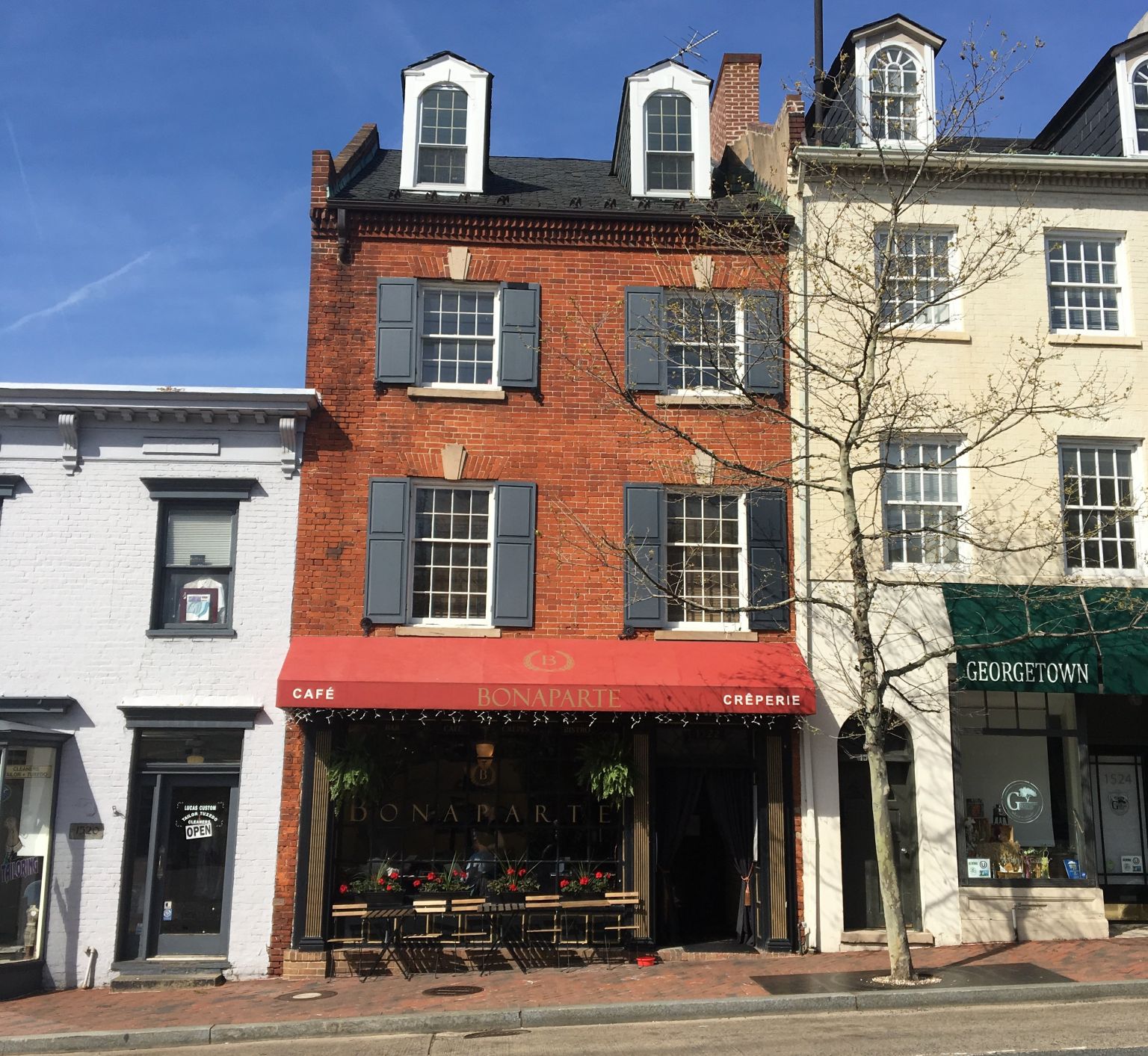 Georgetown is awfully pretty, but it still felt like a real place.

And yes, himself did drive by on his way home on Sunday afternoon. 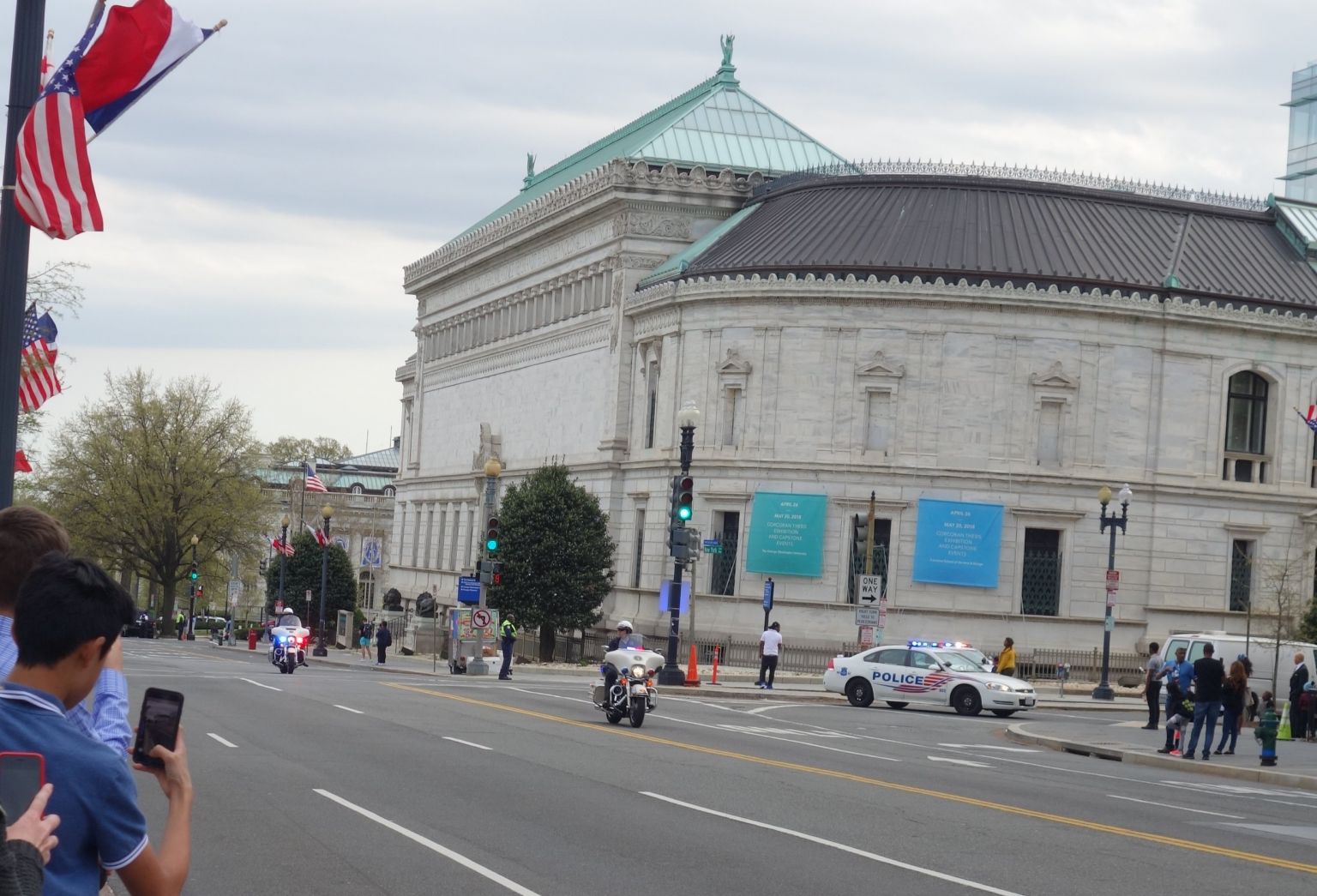 While at the White House, they were practicing for the the visit of Emmanuel Macron the next day. 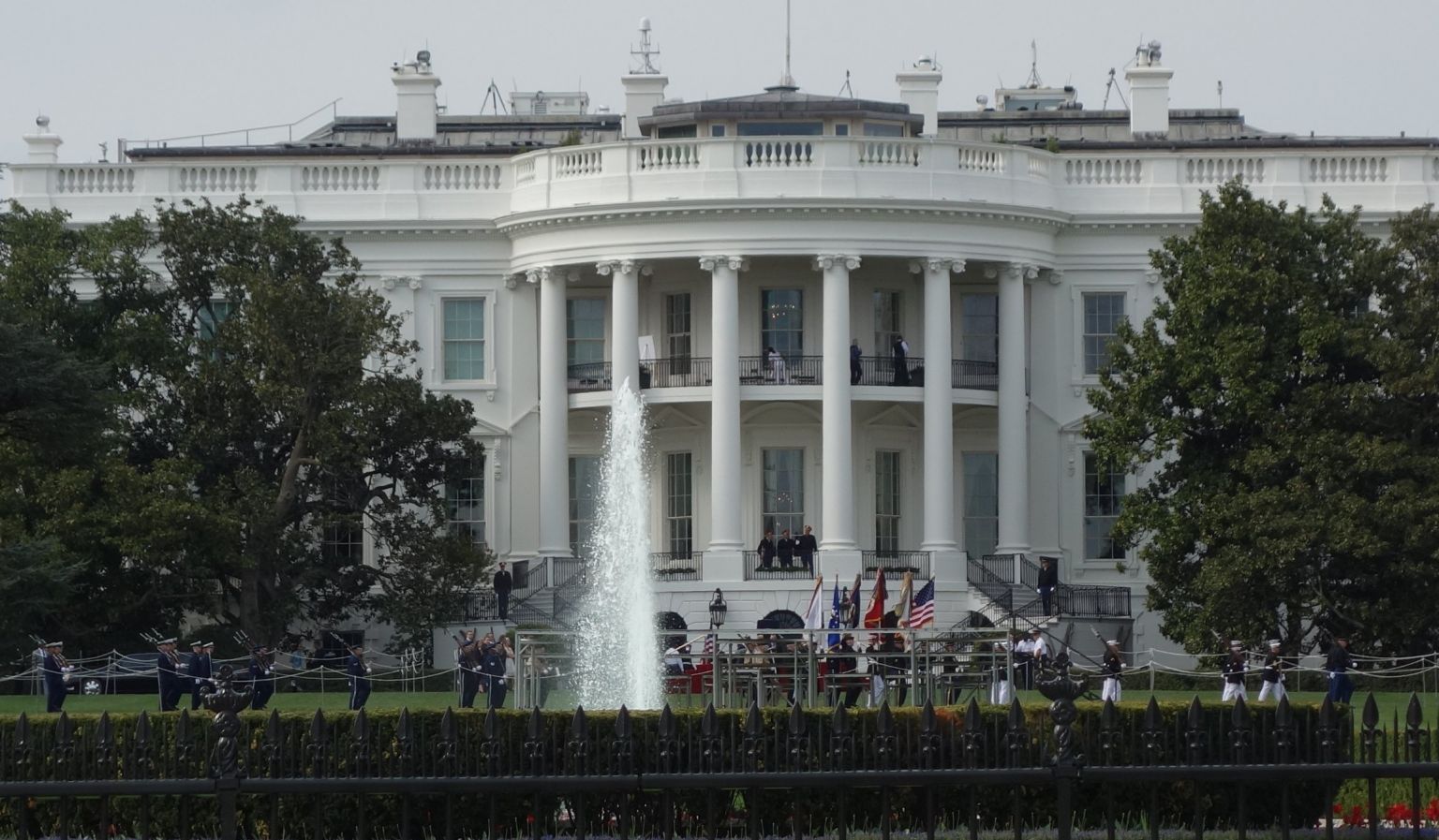