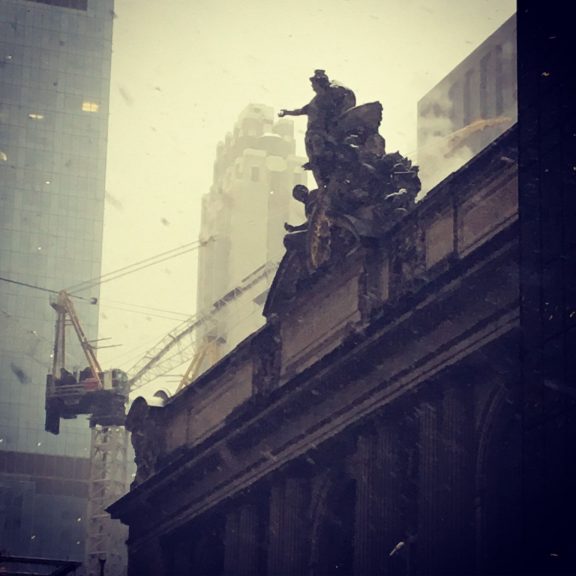 So we went to New York for a few days last month. Here are things we saw that might be useful; or is this just an excuse to post holiday photos? You tell me.

The view flying into Newark on a clear day is a very short, urban planning course called “the Landscape of the Car.” Unwalkable communities and destinations surrounded by parking lots. . . 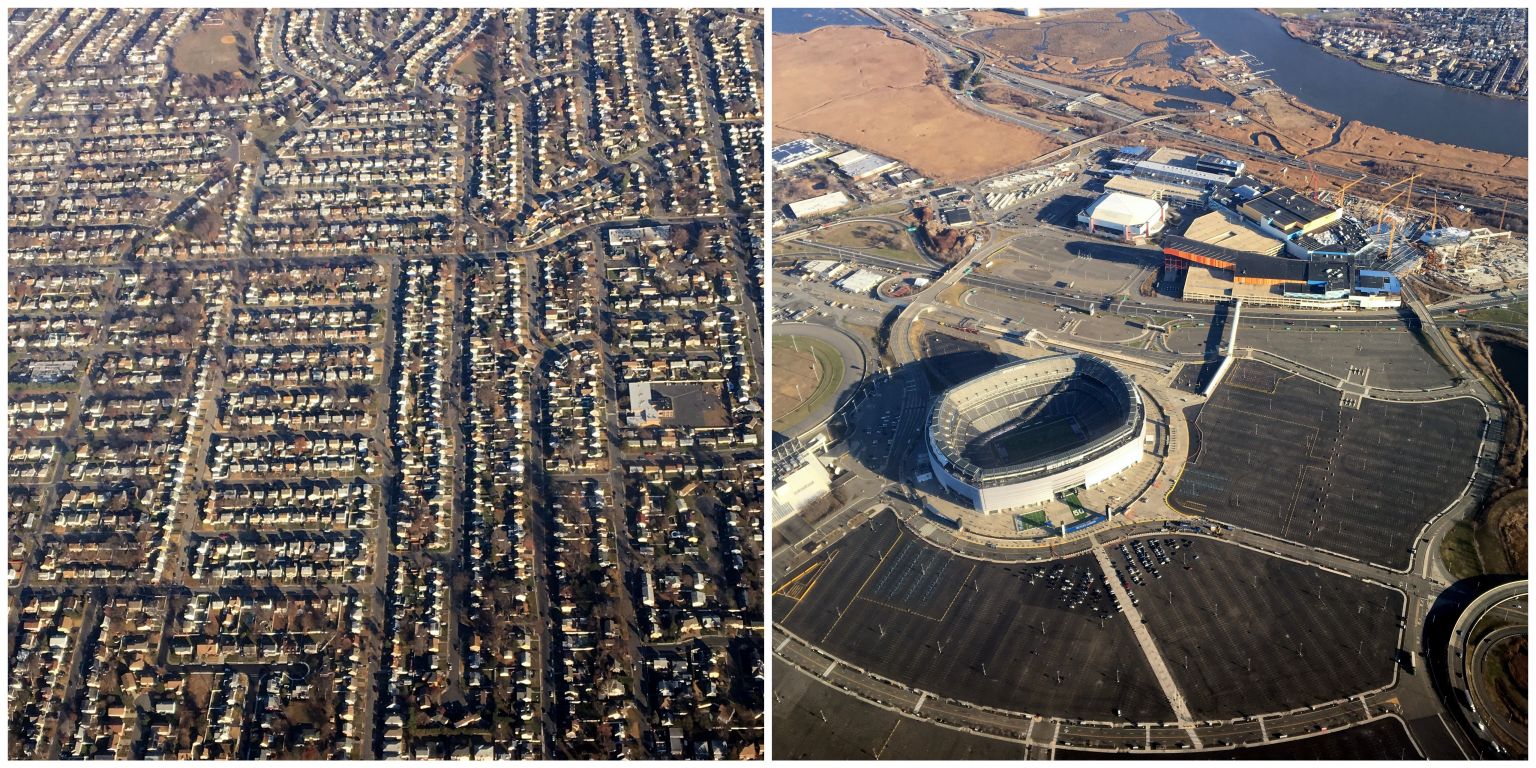 Roadways slice through neighbourhoods as they uncoil towards Manhattan, and moments before landing, acres of new cars at an auto port just waiting to be released. 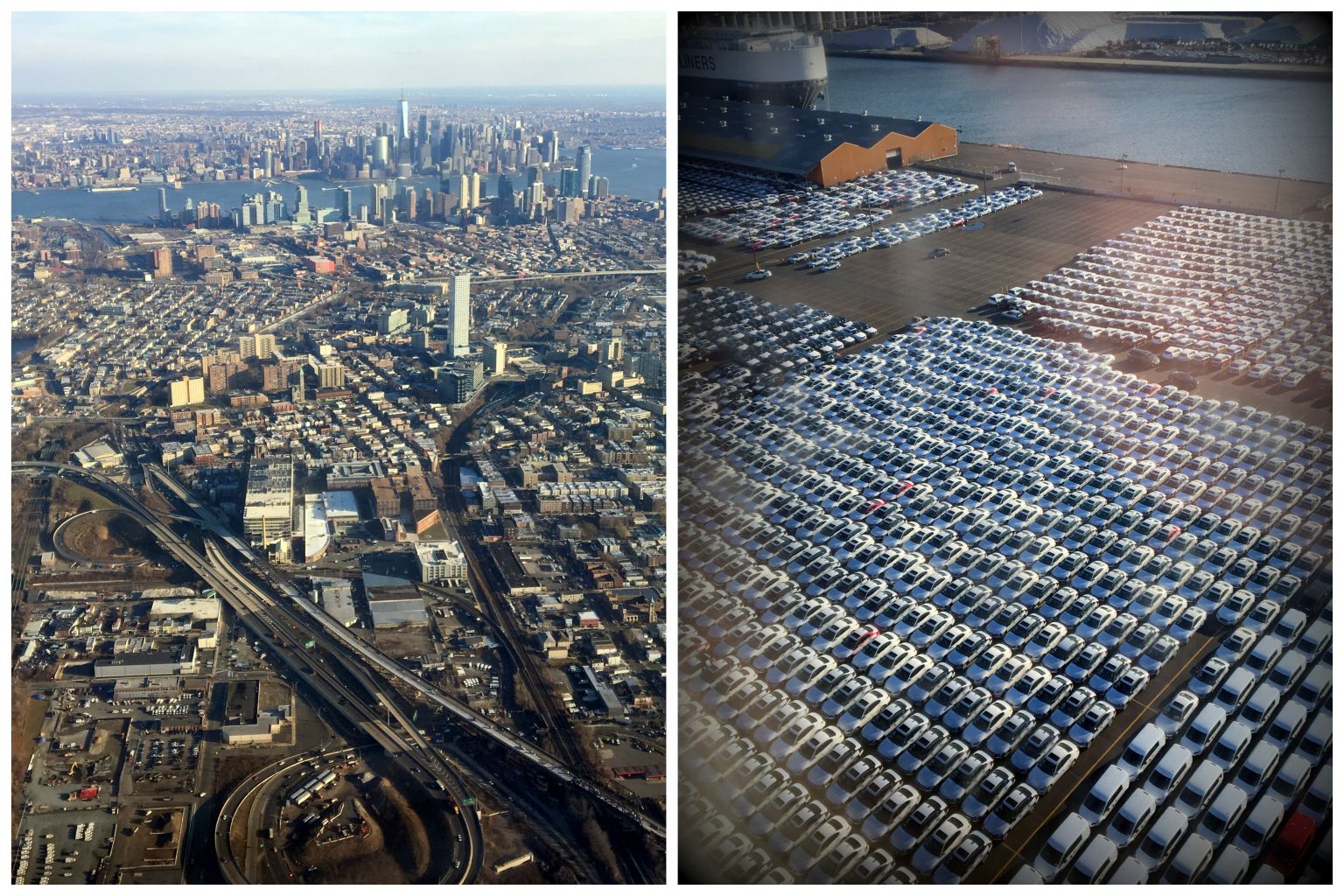 The big David Hockney exhibit at the Met spurred us to go to New York, for the first time in many years. Art can be a destination. 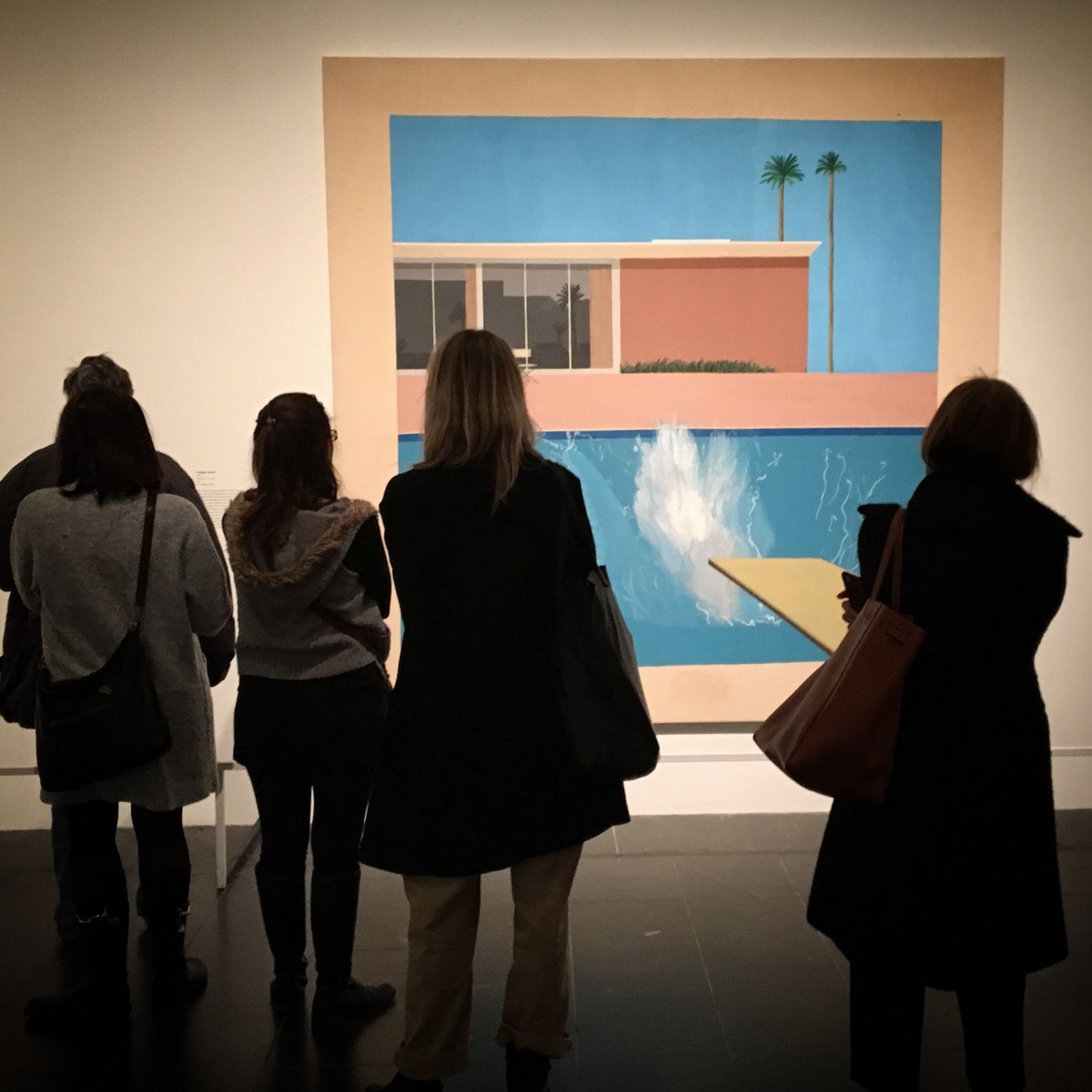 Hockney was an important artist for my generation. That he continues, into his 80s, to be productive and relevant is also encouraging.

The other attraction we wanted to experience was the High Line, the abandoned elevated rail line that has been converted into a magical, linear park. It started to snow the day we did the full walk, which added to the fantasy. 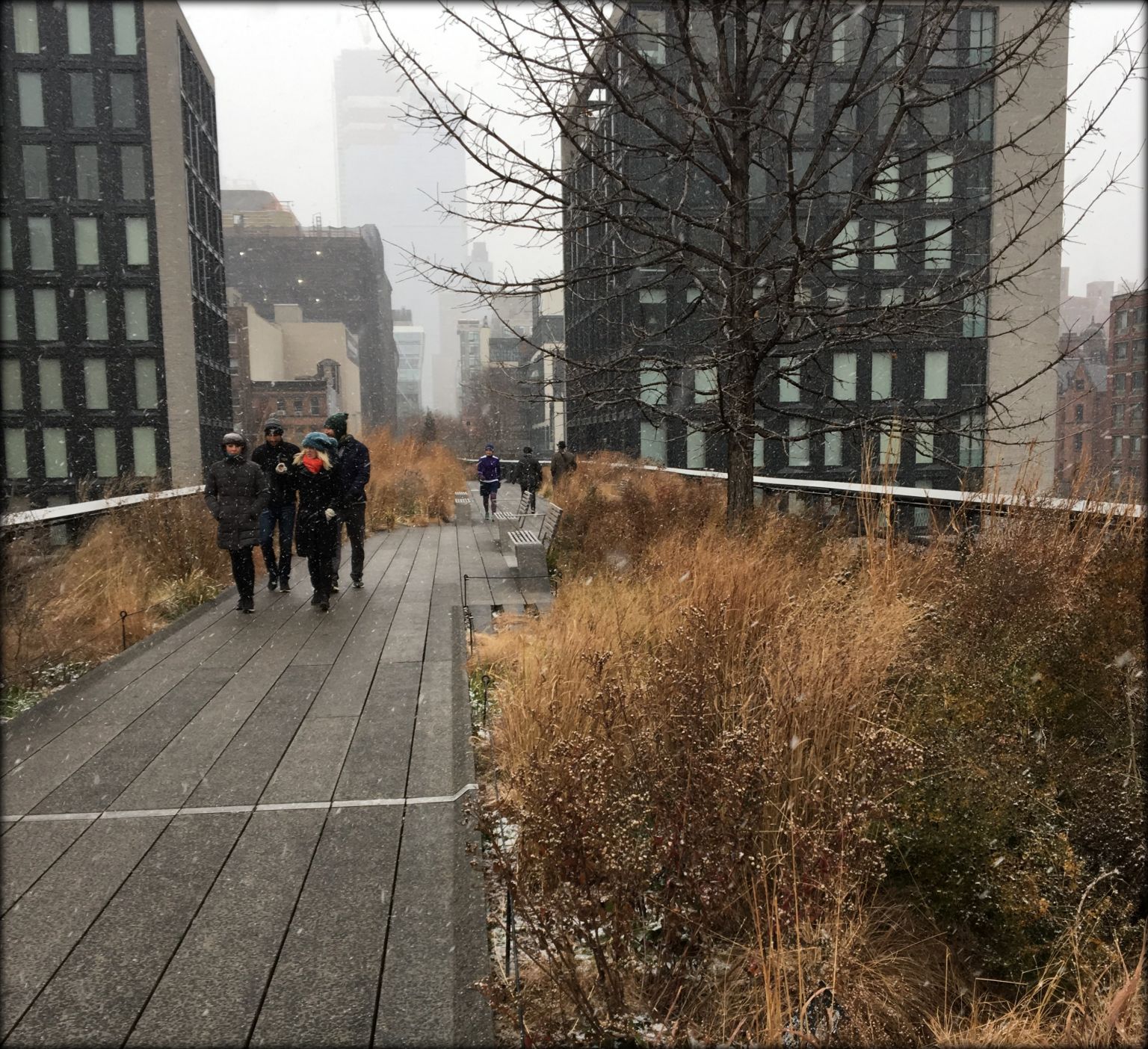 We need to see these amazing plantings in other seasons but this was the perfect introduction without crowds of people. 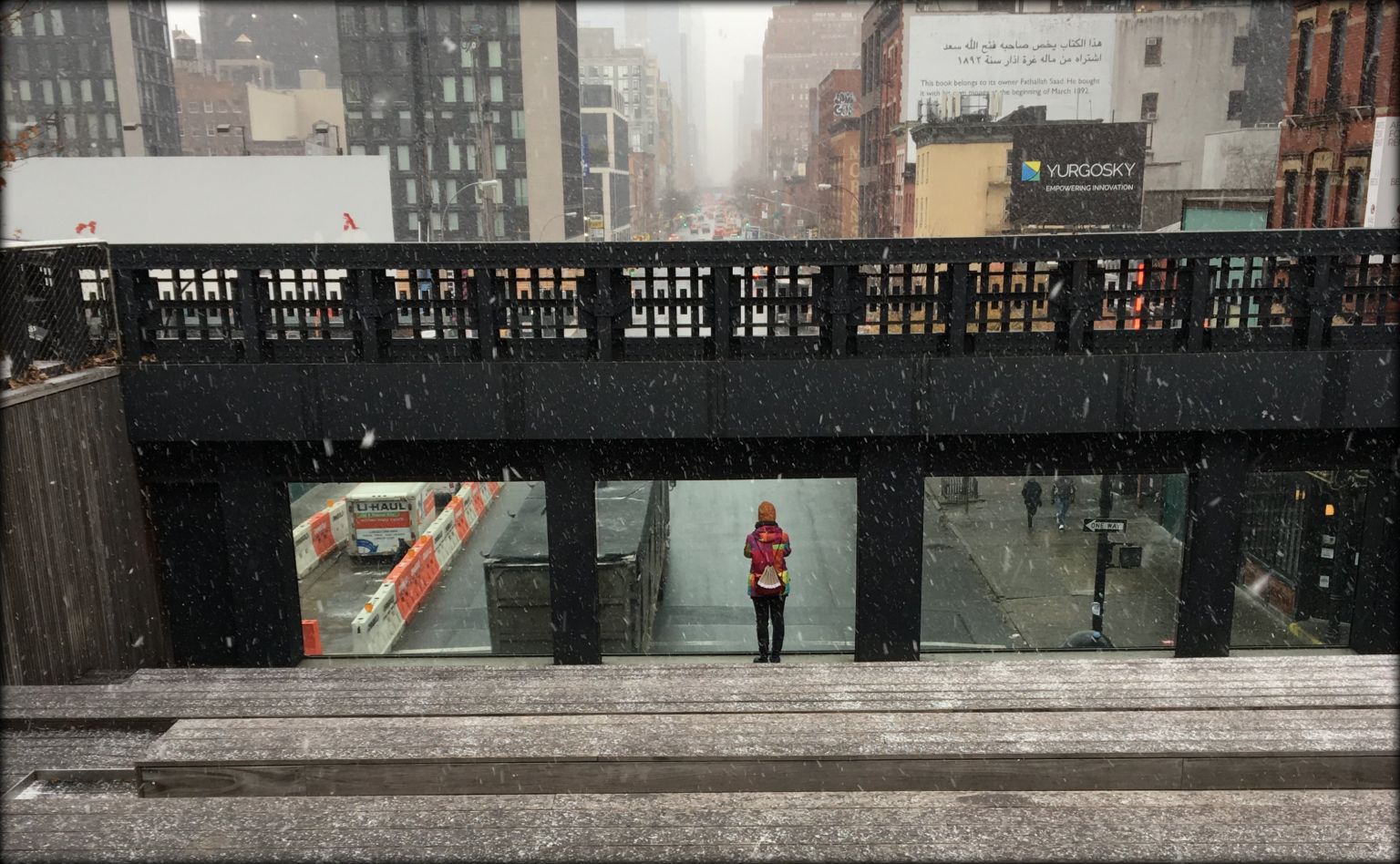 We stayed in an hotel that was built right over the High Line and could observe a section from above. This is the Meatpacking District, and an active meat warehouse is also in this view. 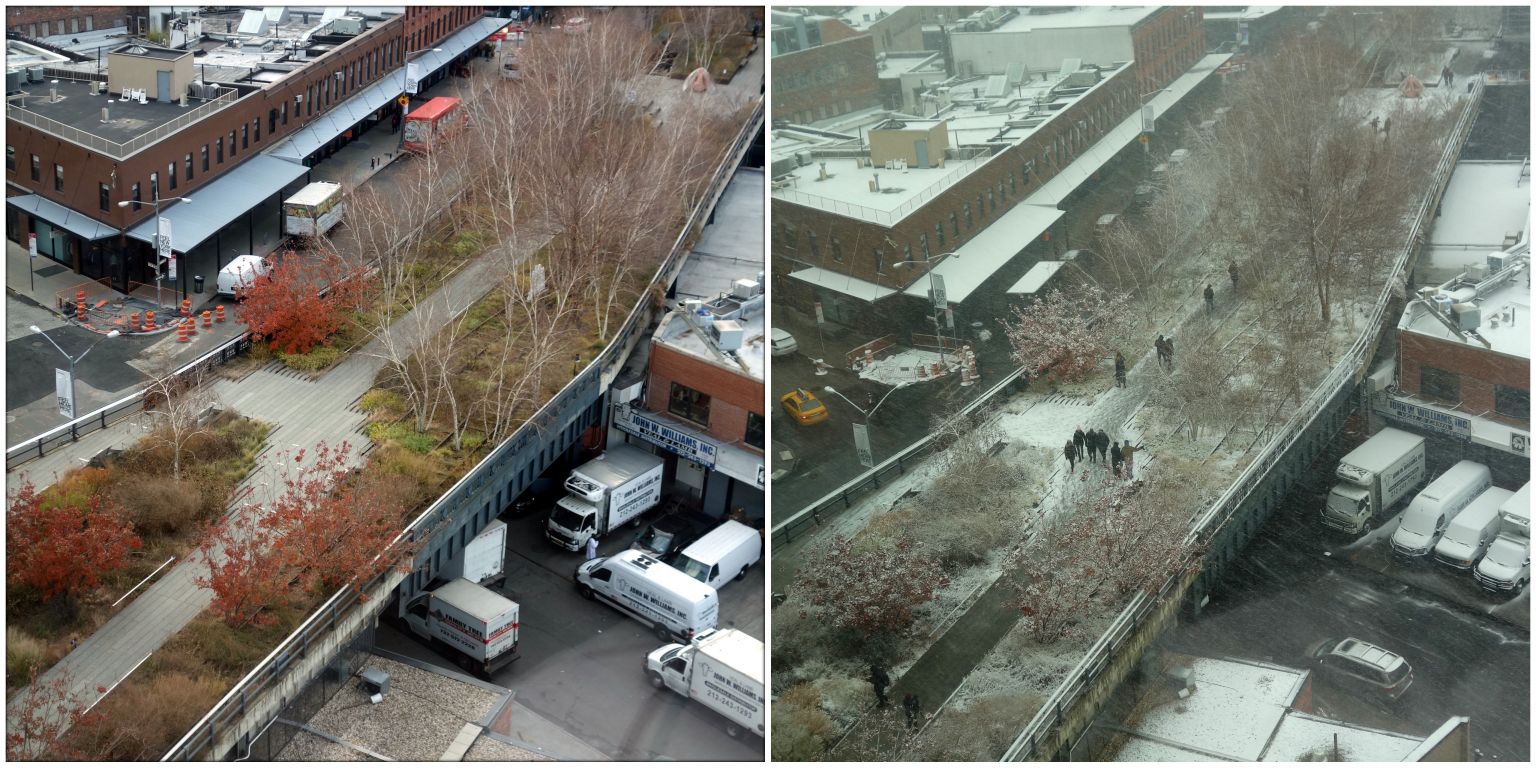 The rest of the visit was mostly seeking out experiences with architecture. The new transportation hub/shopping centre at the World Trade Center site is a grand gesture that stands out in a crowd. It was designed by Spanish architect Santiago Calatrava. 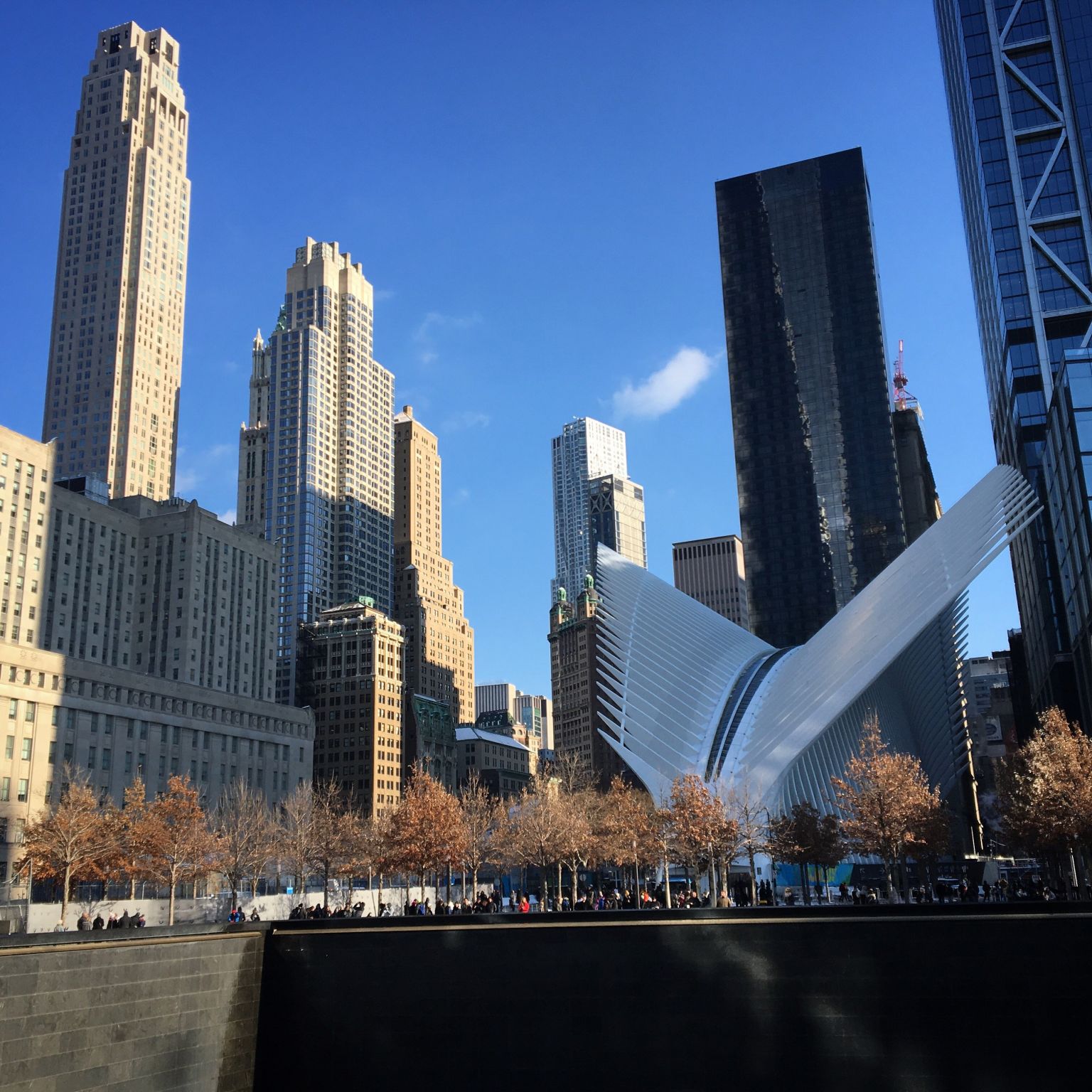 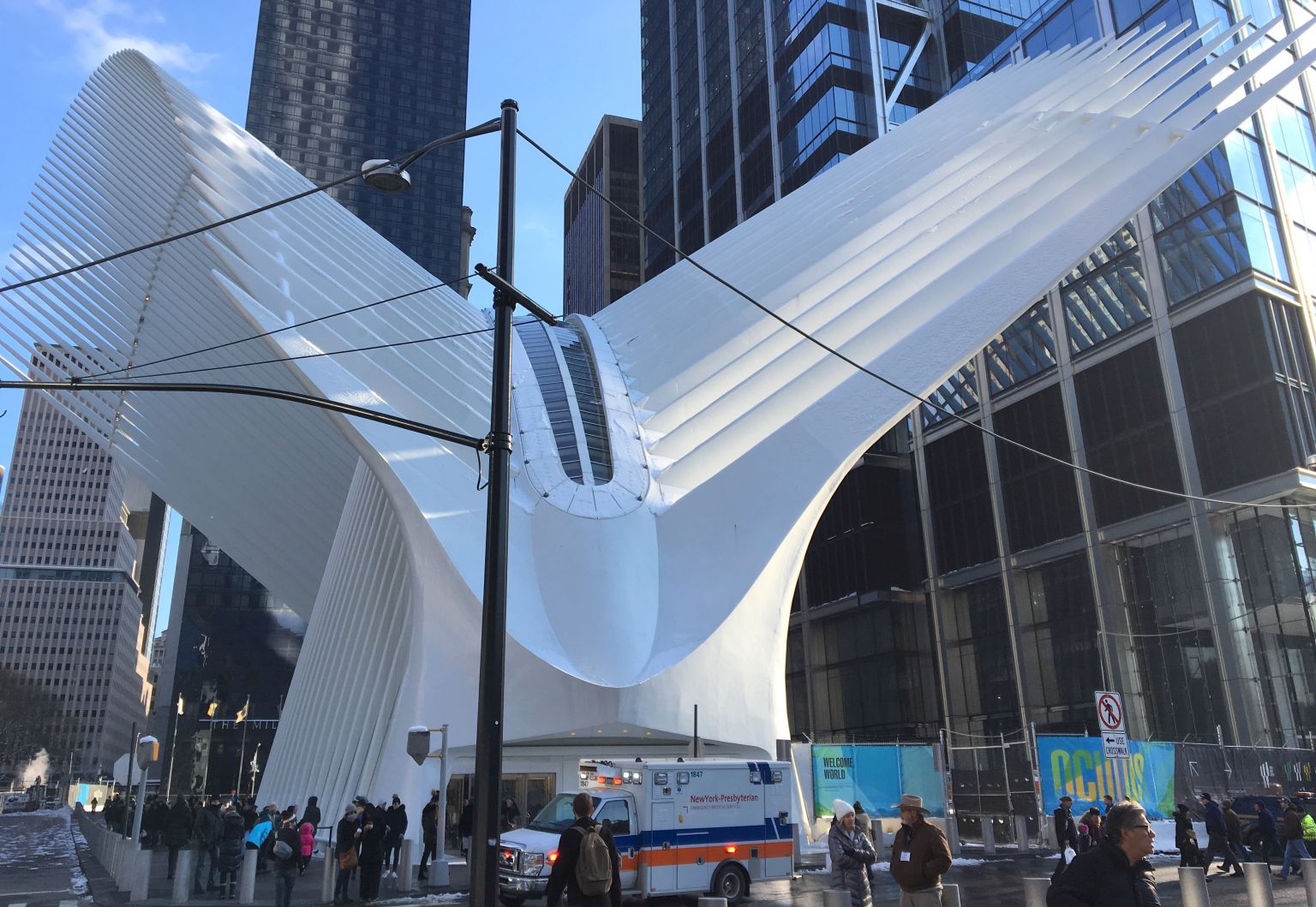 You enter an astounding white space called the Oculus. Impressed me, but many folks grumble about the leaks and the project being two billion dollars over budget. 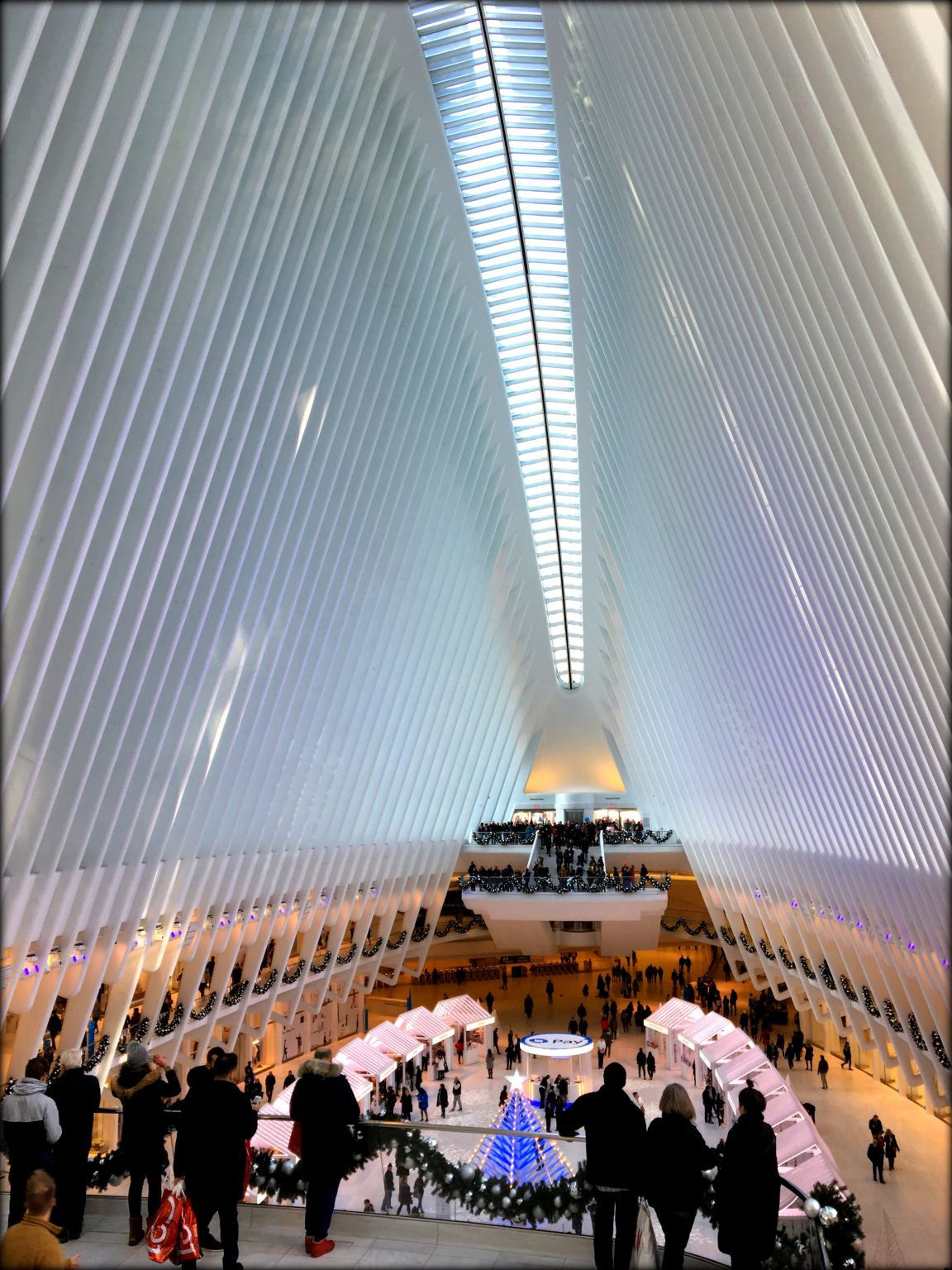 The brightness of the Oculus contrasted with the darkness of the 9/11 Memorial next door. Felt awe without hope. 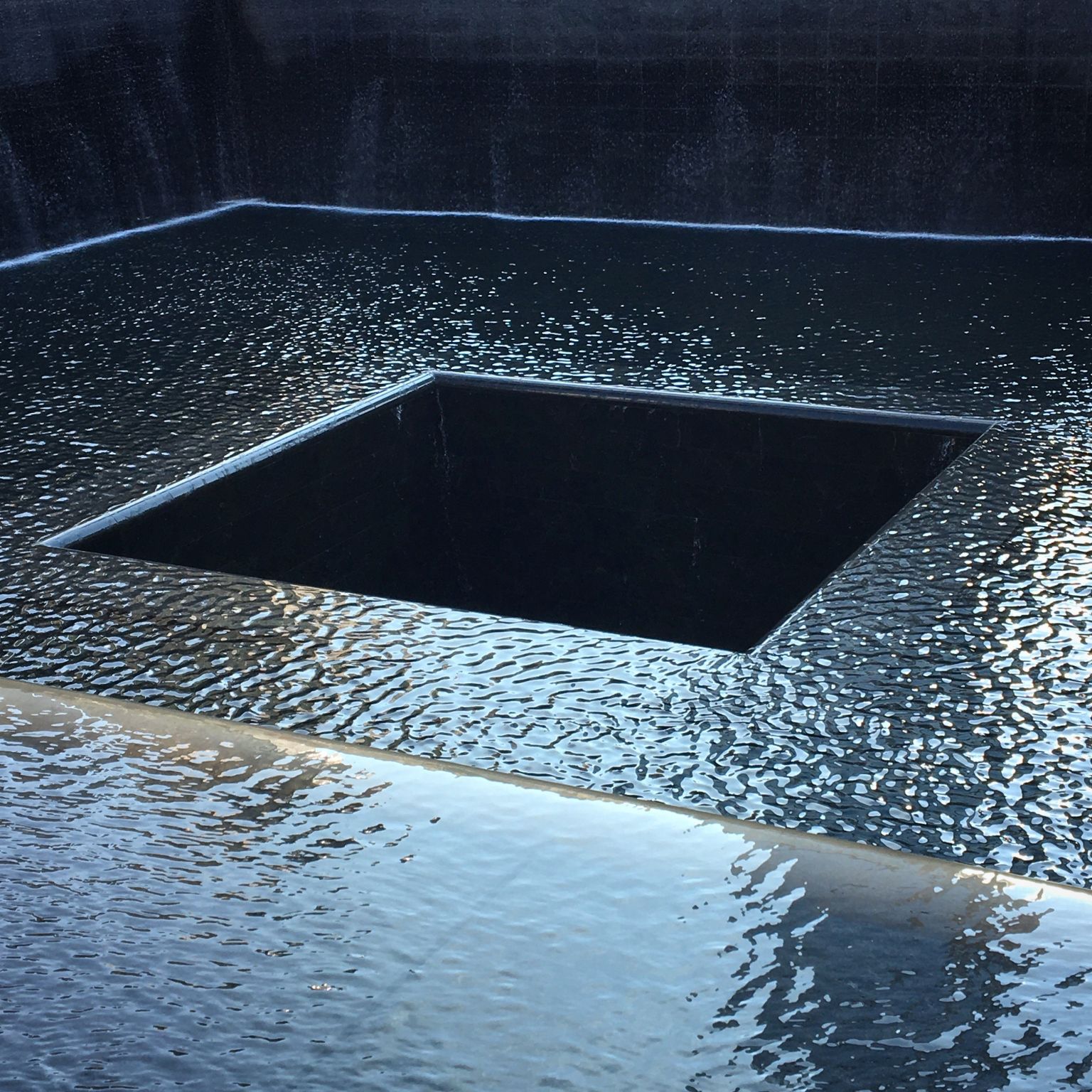 The Vessel is a future landmark that is still under construction in the centre of Hudson Yards, the largest development project in the US. A mile of interconnected stairs and pathways will provide visitors with a workout in addition to the anxiety of being trapped in an Escher drawing. But there will be good views. 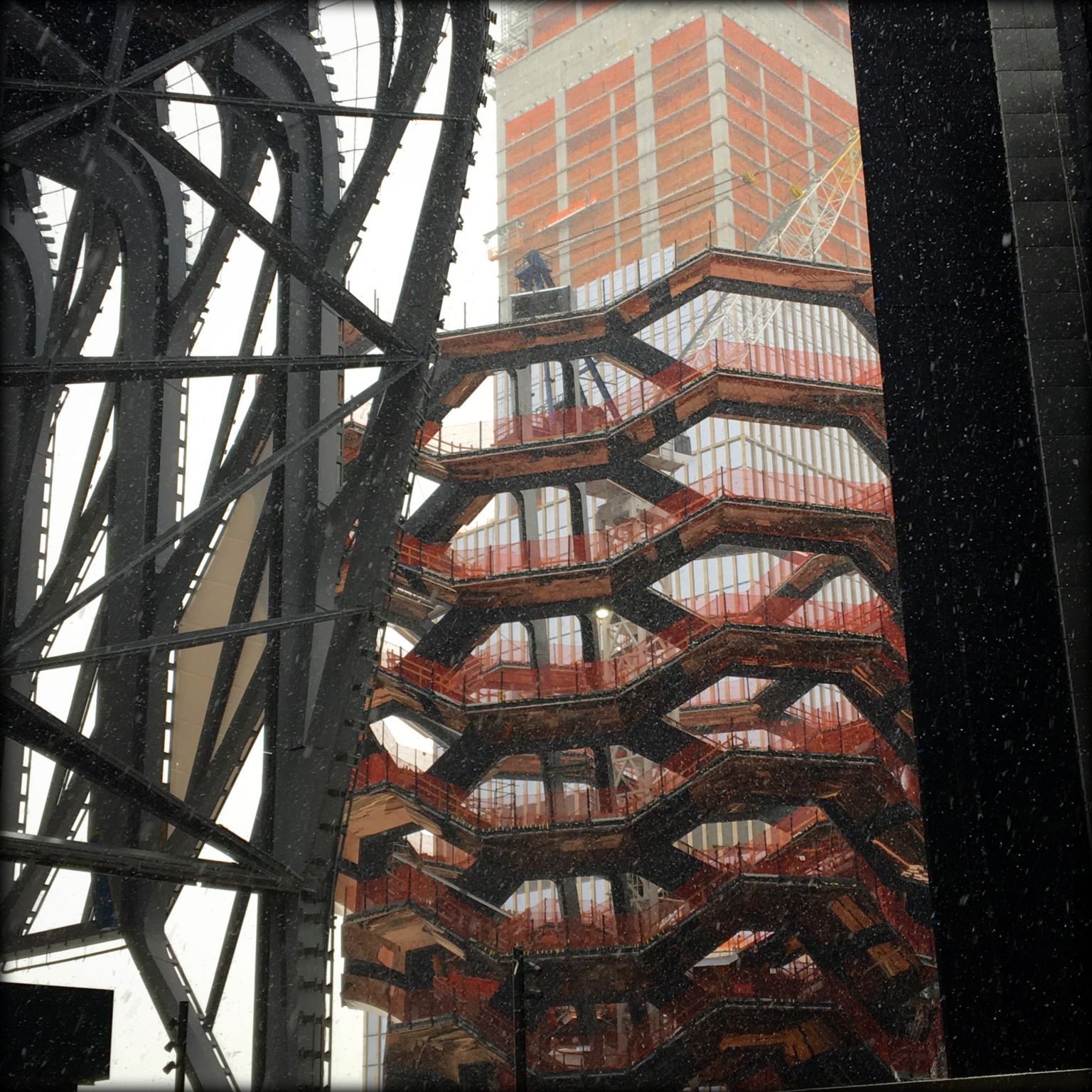 The American Institute of Architects offers a daily boat tour, with a knowledgeable and cheerful guide pointing out architecture and engineering landmarks from all eras of the city’s history. We circumnavigated (clockwise) the island of Manhattan, in comfort with drinks and snacks. The tour is already paying dividends to my cultural literacy, because I could picture Riverside Church and the location of the Bronx when I heard them mentioned on the radio this week.

Some highlights from the tour: I particularly wanted to see the pointy West 57th development designed by the Bjarke Ingels Group. 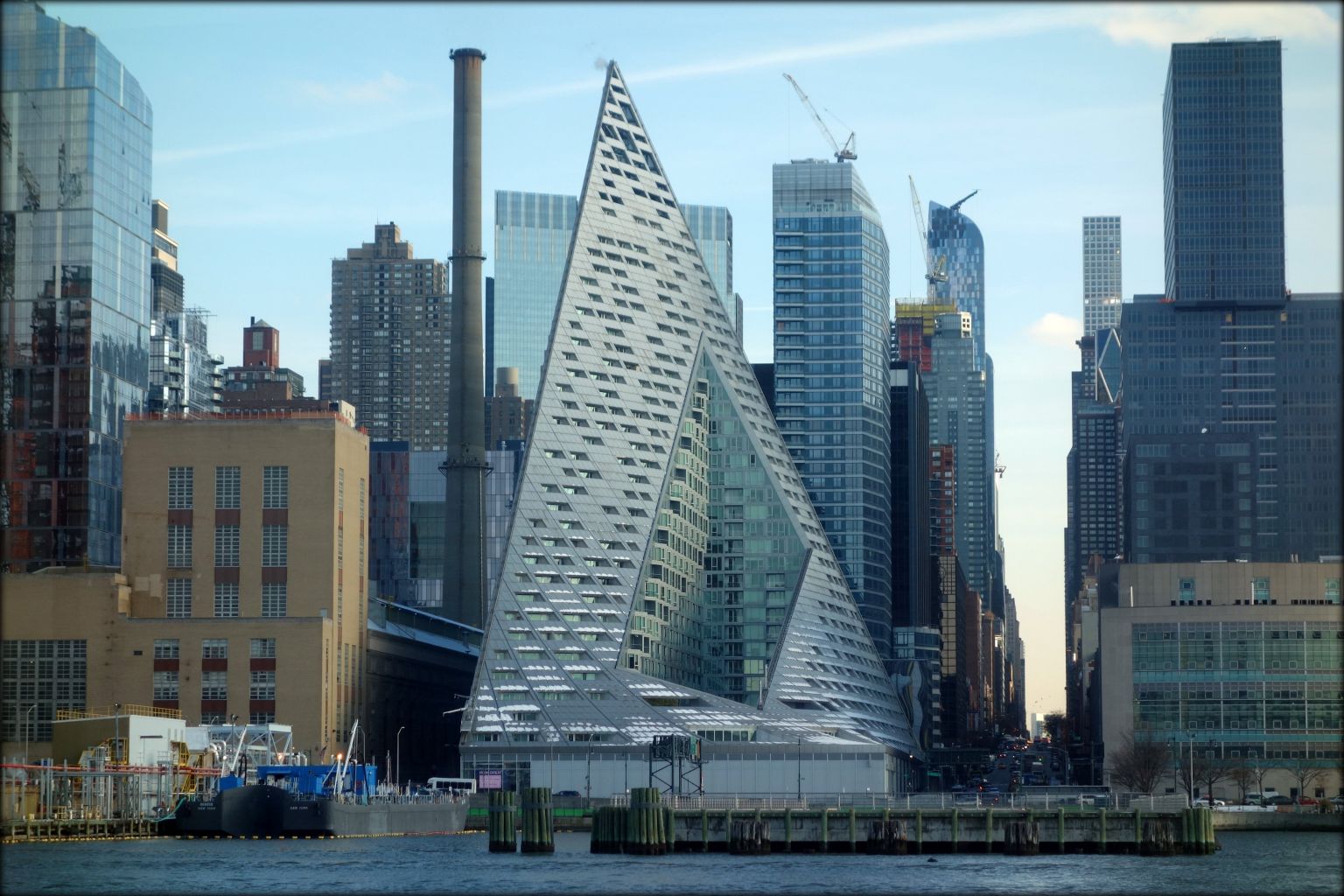 On the east side of the island was this drunken pair of skyscrapers visually supporting each other with a sky bridge. The Empire State Building is upstanding in the background. 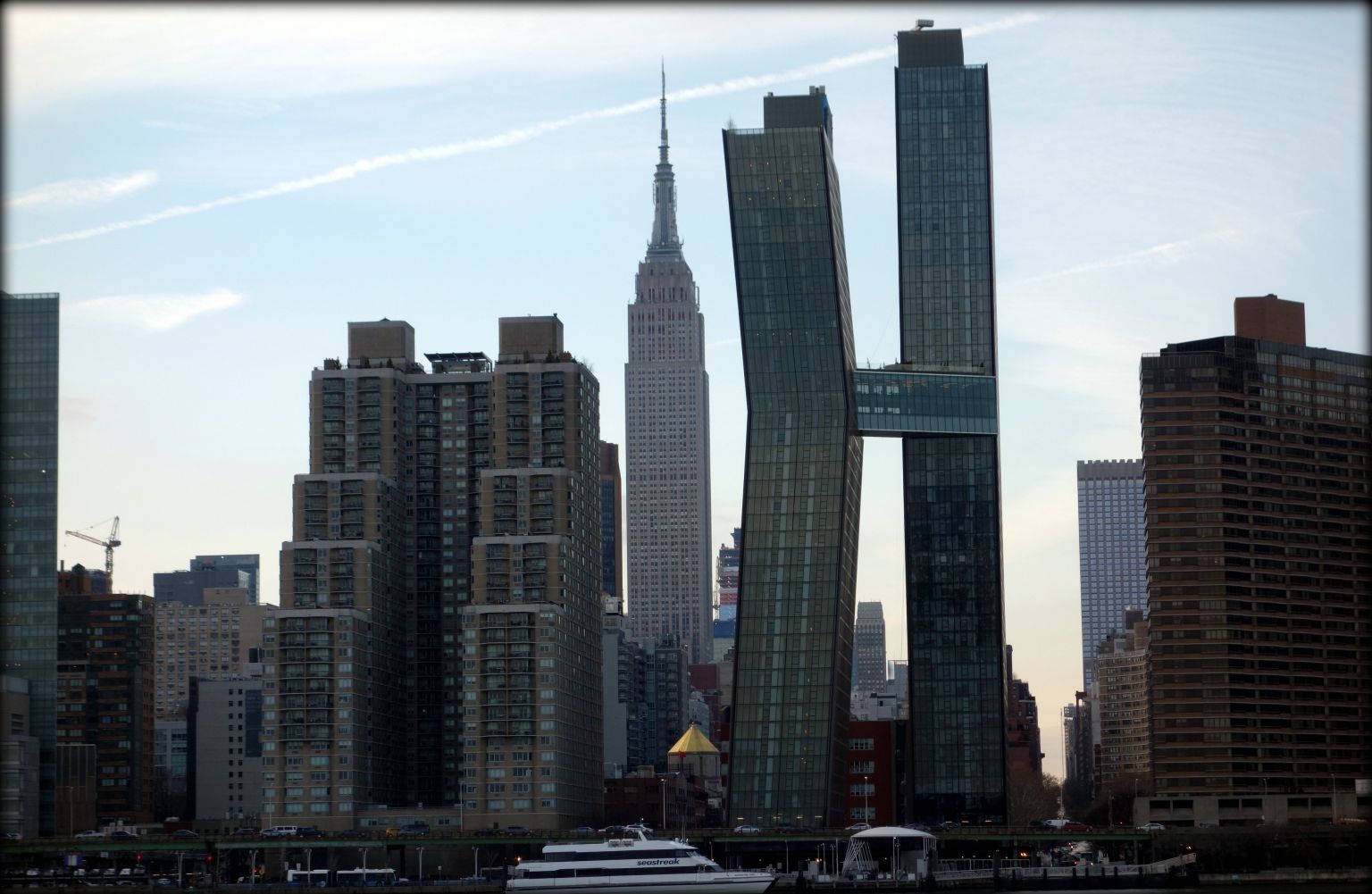 This treat in the Bronx is the former headquarters of H.W. Wilson, a publishing company, known for its Readers Guide to Periodical Literature. The lighthouse was part of the company logo, symbolizing their mission: “To give guidance to those seeking their way through the maze of books and periodicals. . .” The building is now used for mini-storage. 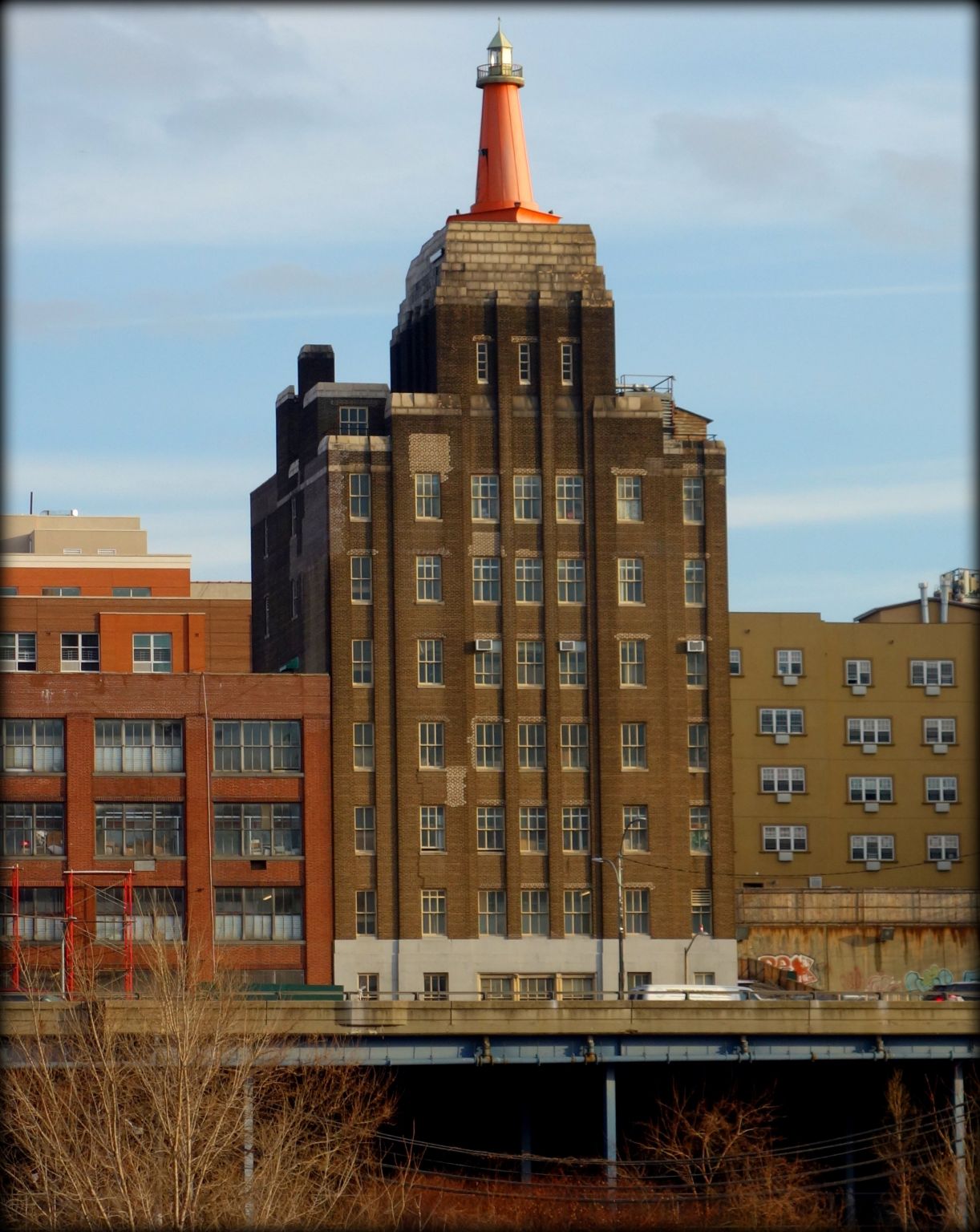 More bridges than I knew. 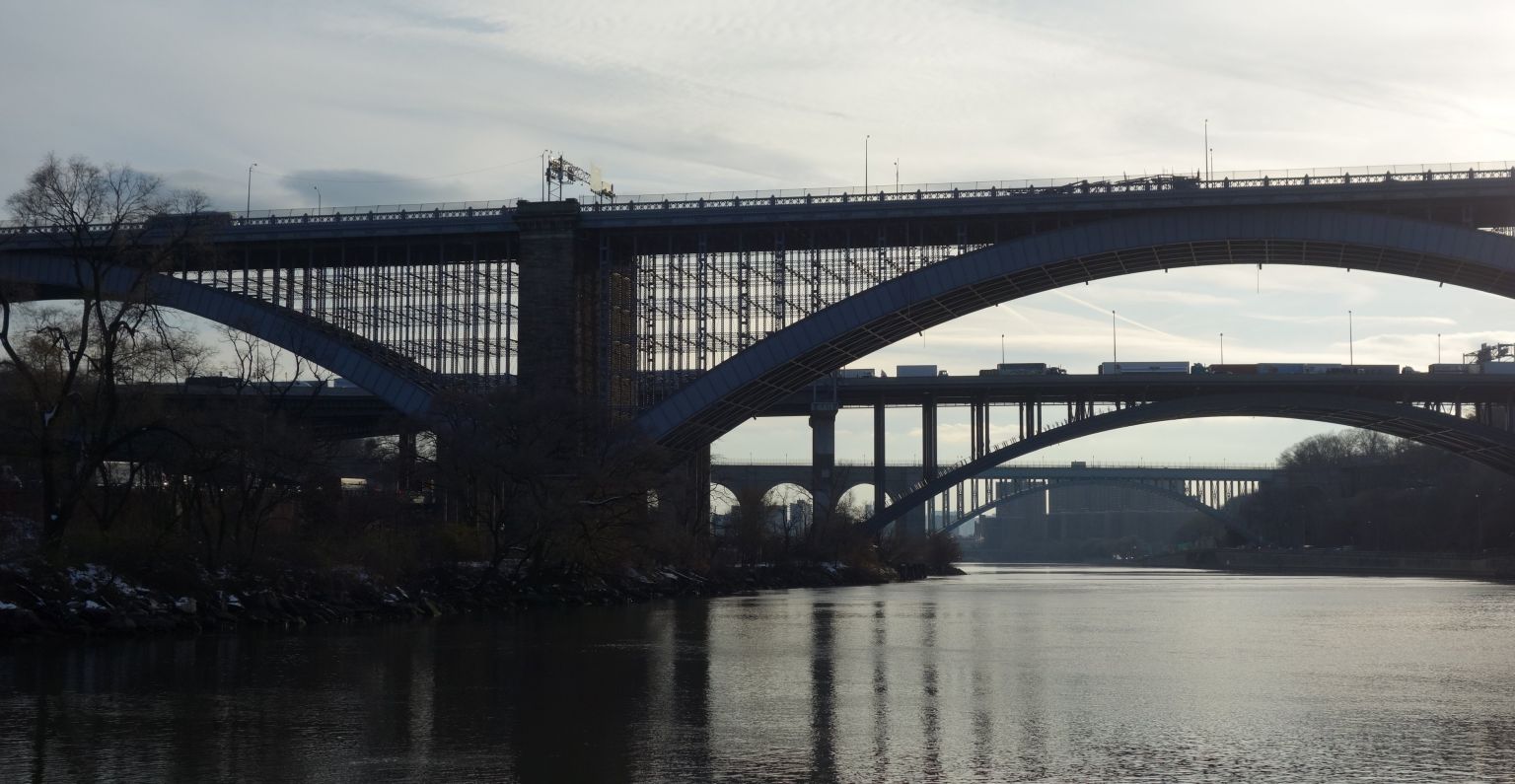 Because of my interest in cast iron architecture I was particularly excited to take a tour of the SoHo loft that had been owned by conceptual artist Donald Judd. Another fascinating experience. Imagine if the Nova Scotia Collage of Art and Design offered regular tours of their Granville Street Campus. There’s an idea. 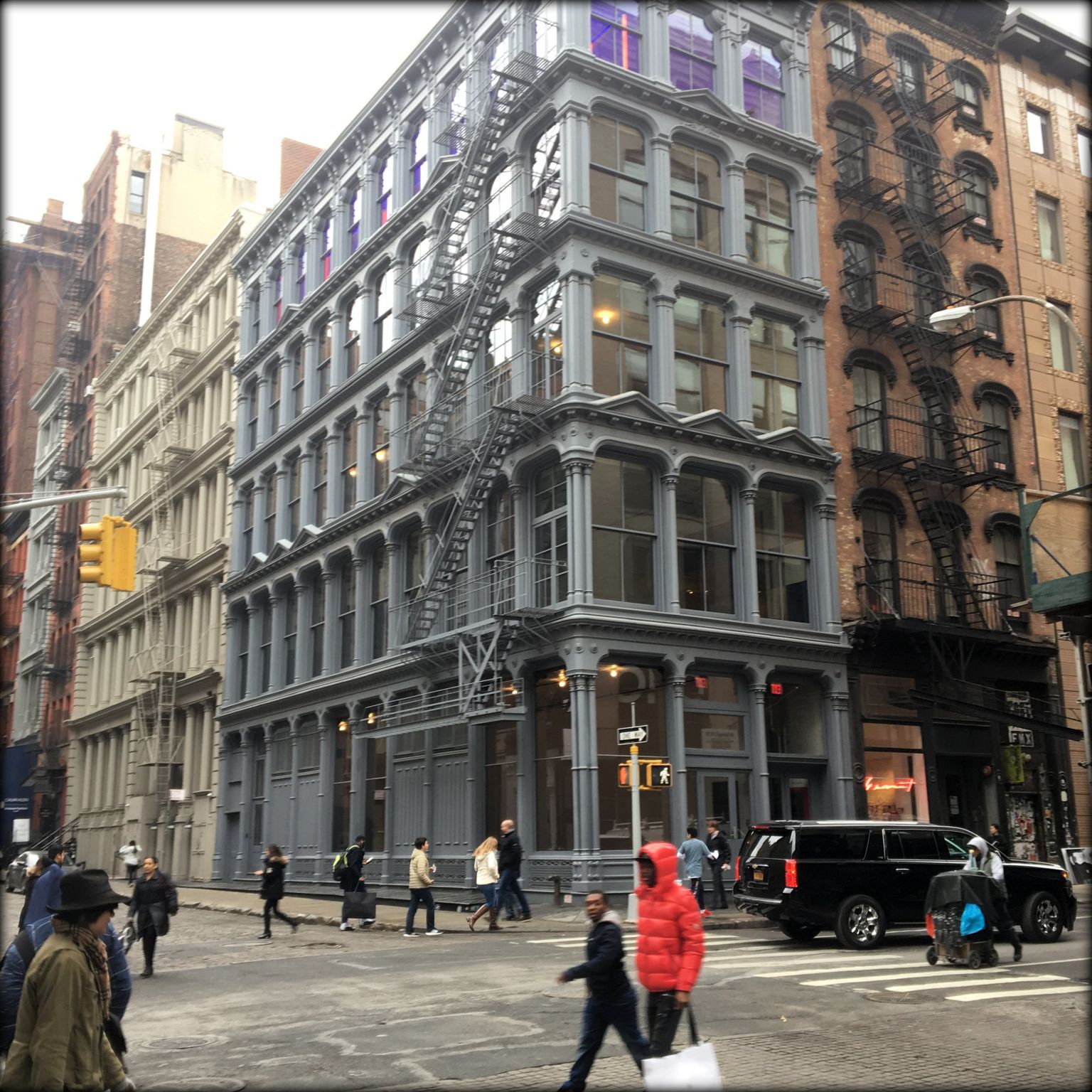 One of the people in the small tour tour said she worked in the building across the street. Turned out to be BlockChain. It’s that kinda, of the moment city.

Visiting a big city in winter was special and fun, particularly  when it is very walkable and has convenient public transit. 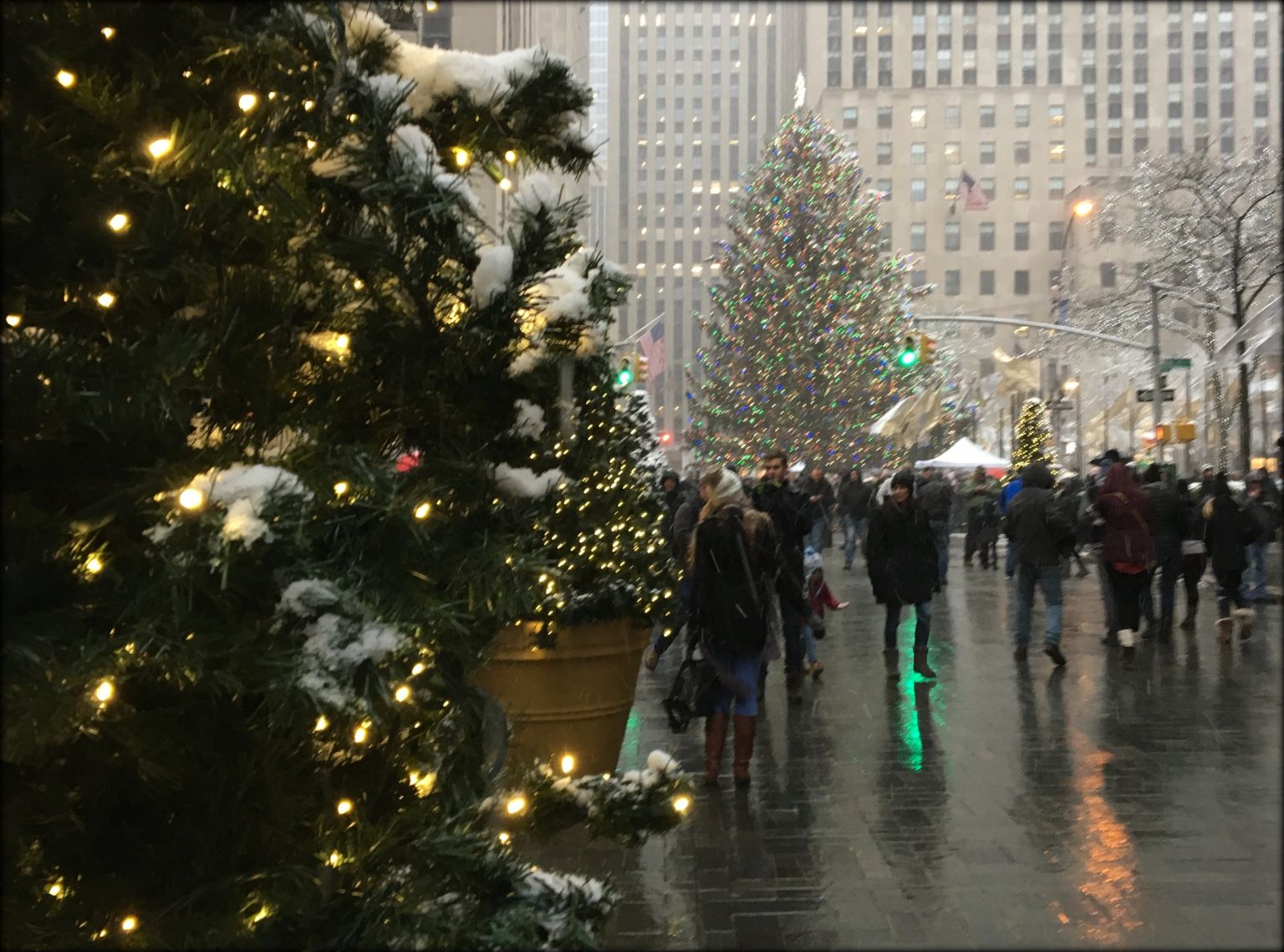 Watching people skate, with grace or with fear, was amusing. The two ice surfaces we observed were in the middle of the bustling business district, not in some featureless field. 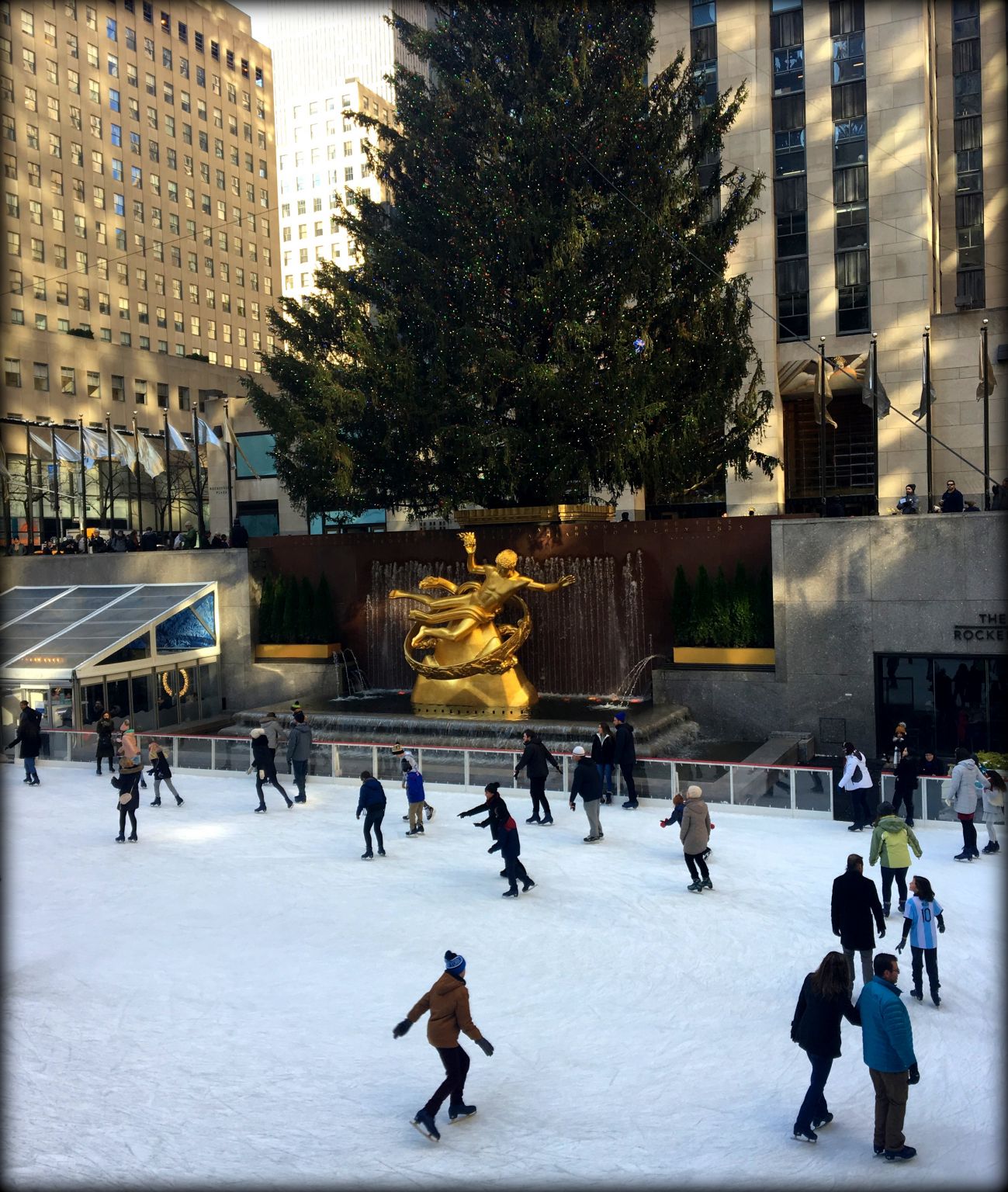 And just the right amount of snow does makes everything look perfect. 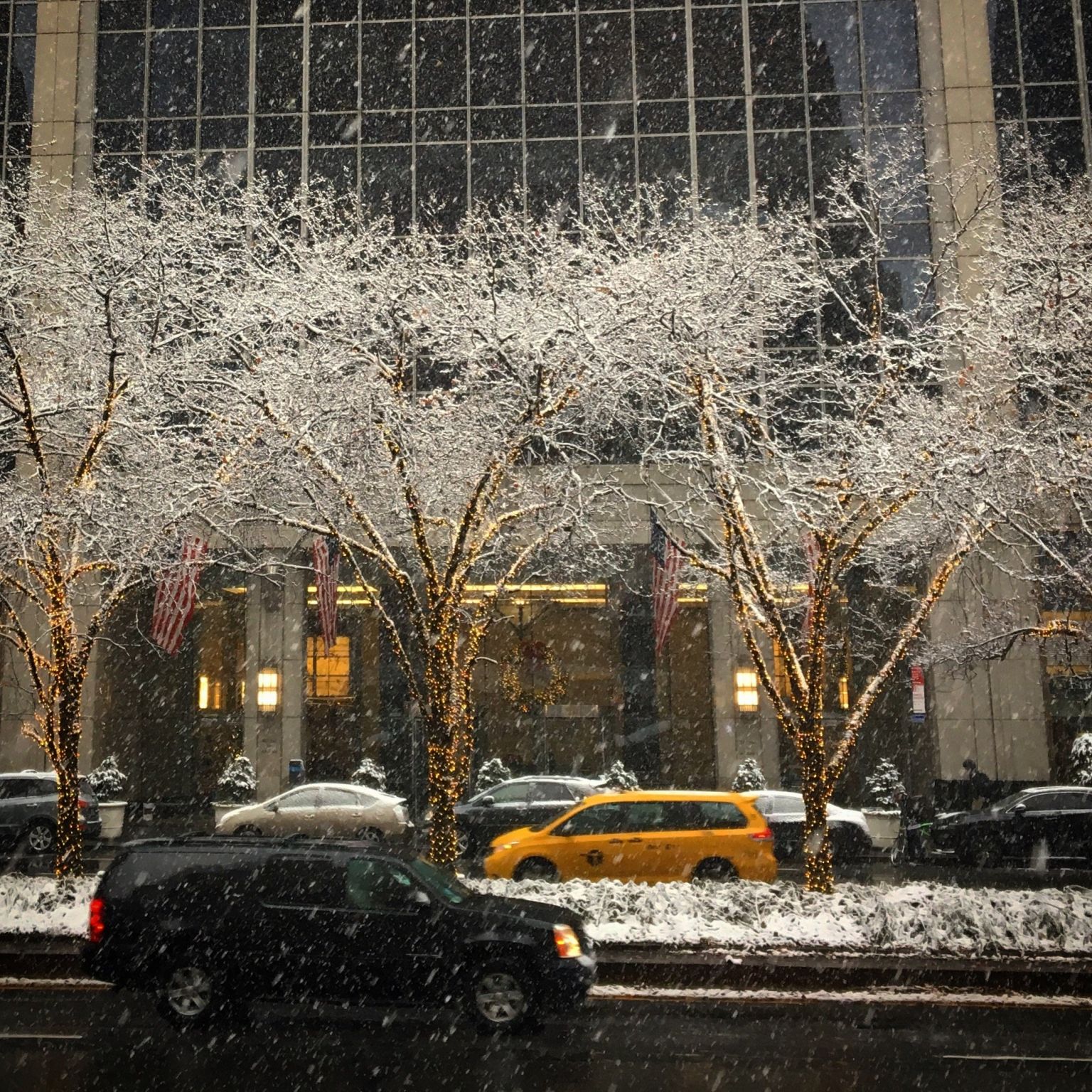 On the left are Christmas trees for sale. Maybe you know a Nova Scotian relative! 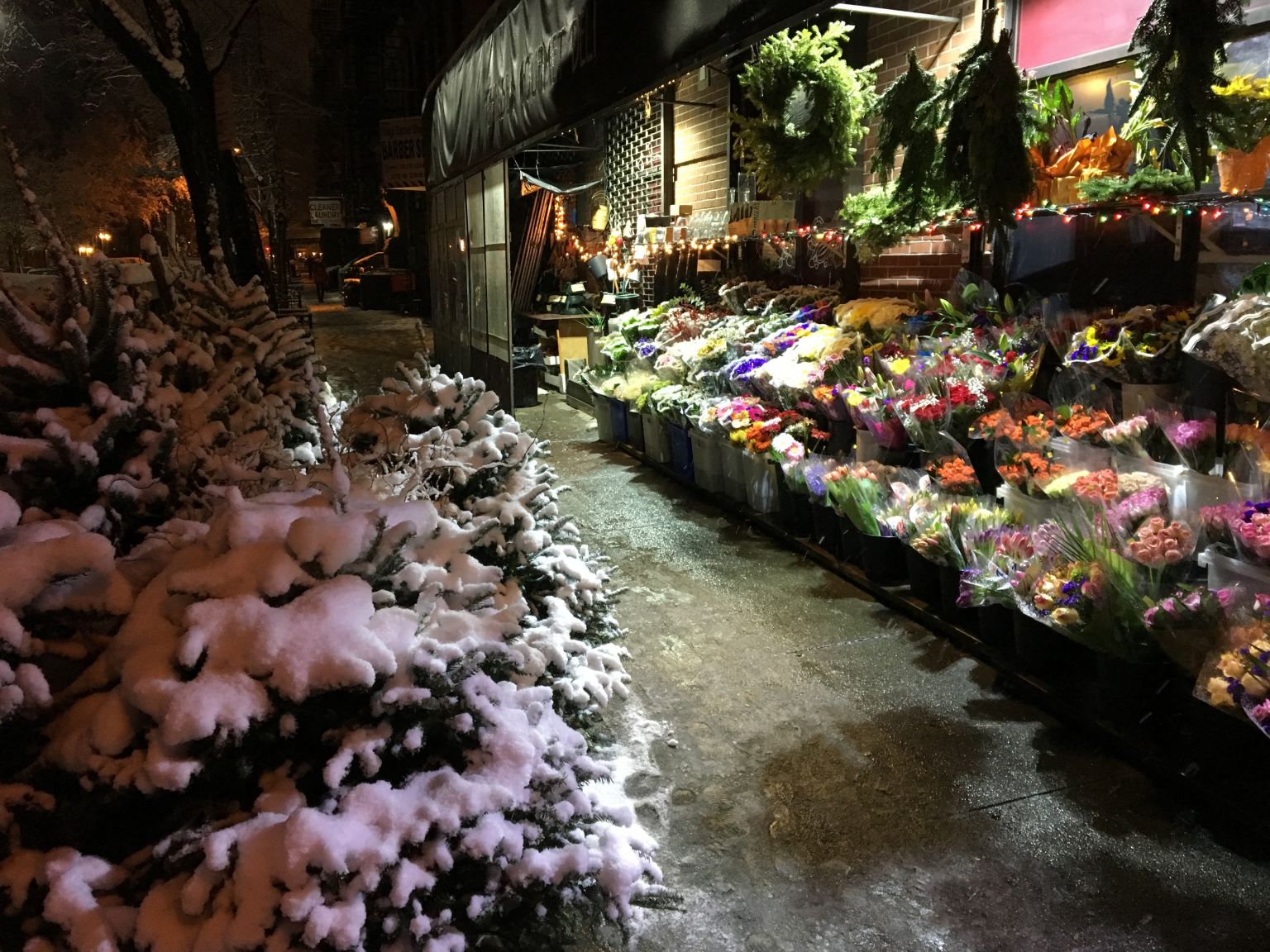 So what lessons: dress warmly, no one cares what you look like. And small, clever, interventions can make a big difference. 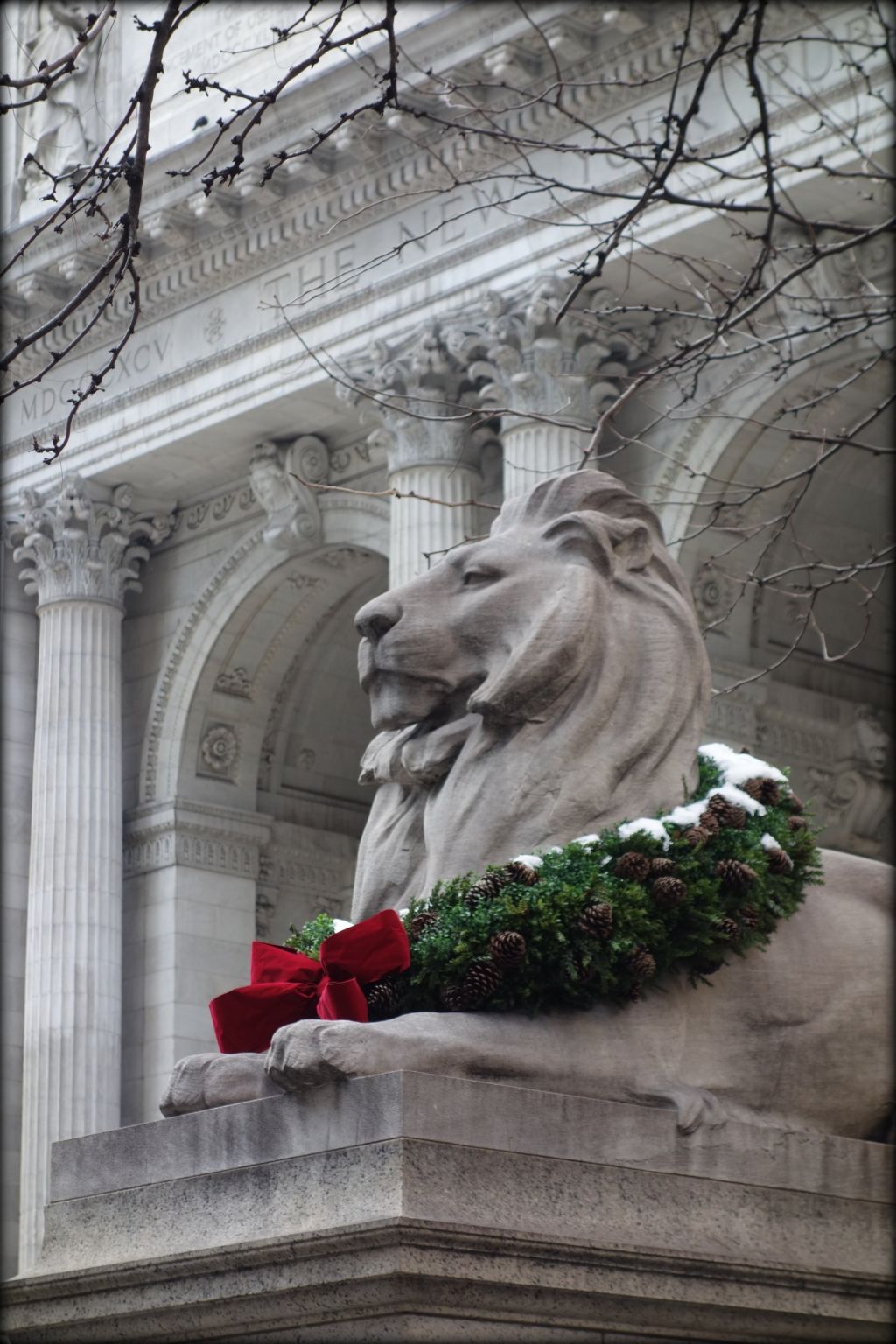 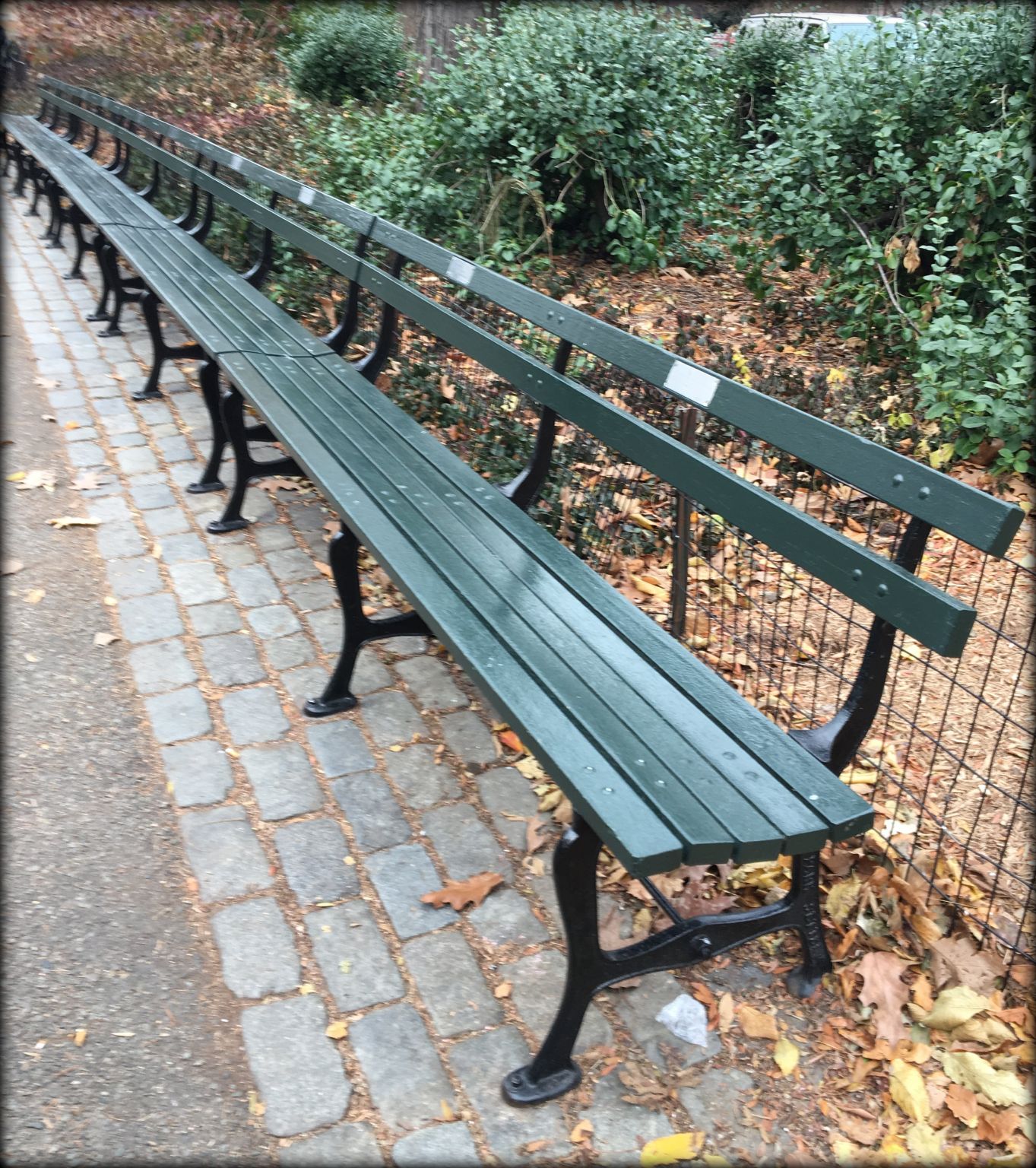 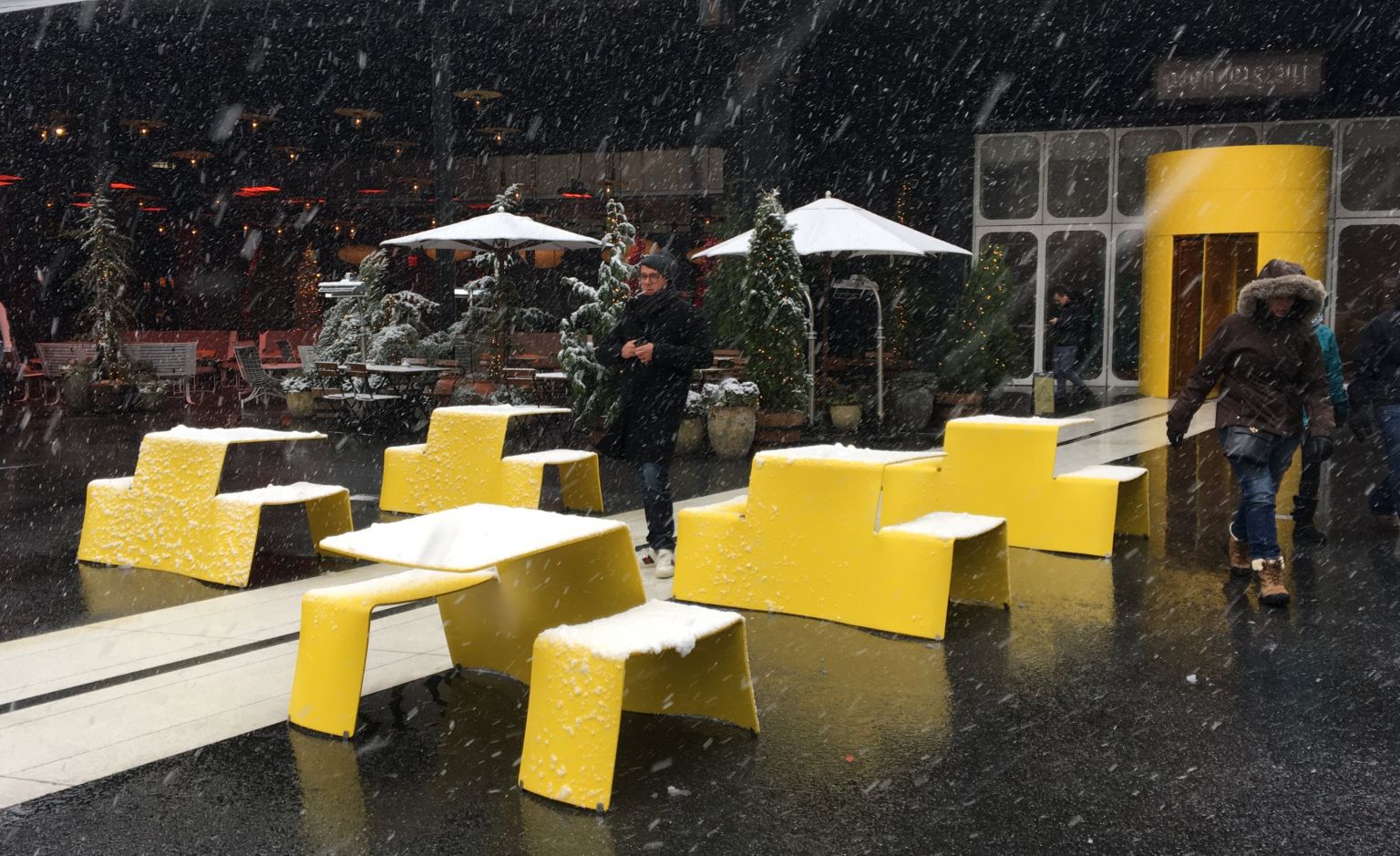 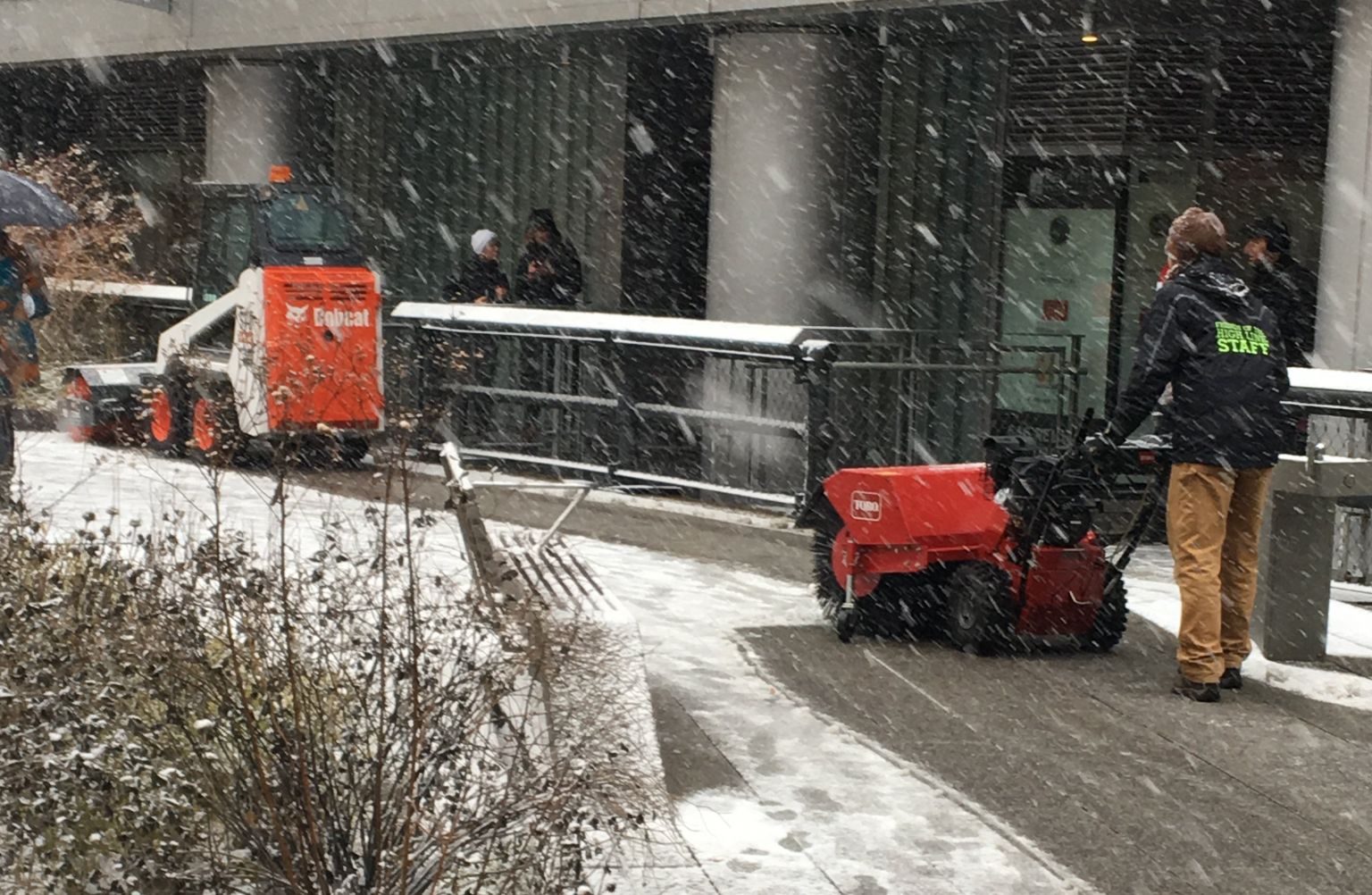