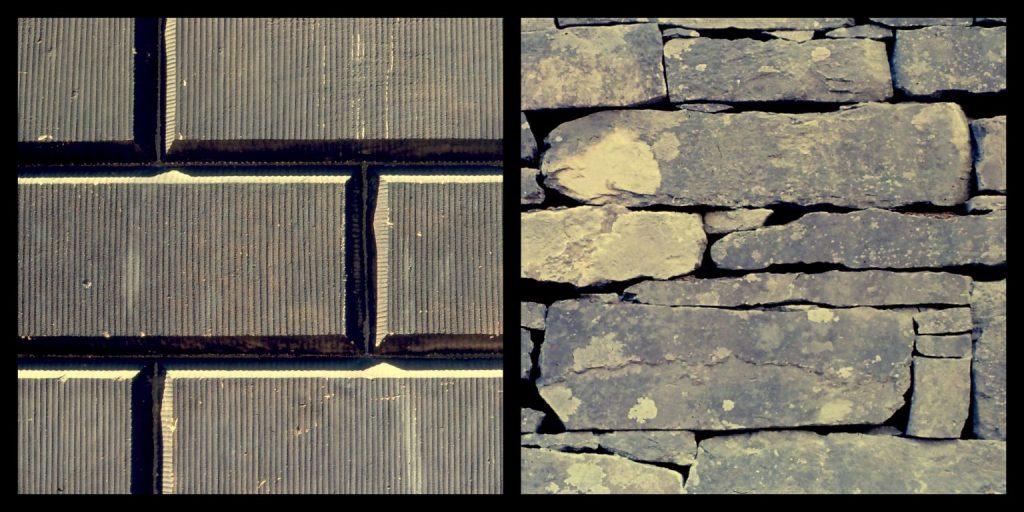 The last post introduced my affection for the collage feature, that makes it easy to combine images (more is more). I continue to mine my collage cryptocurrency (that’s gold Jerry, gold!) with a collection of collages that celebrate our Nova Scotian material culture and cultural landscapes (in other words, stuff I like).

One spring Saturday we visited the exhibition gallery in the Archives, and then made the short walk to the Public Gardens and got an ice cream cone in Horticultural Hall. Looking up in both spaces, separated by 130 years (1980/ c1850) I marveled at the beauty of both public buildings. Our governments care well for many treasures. 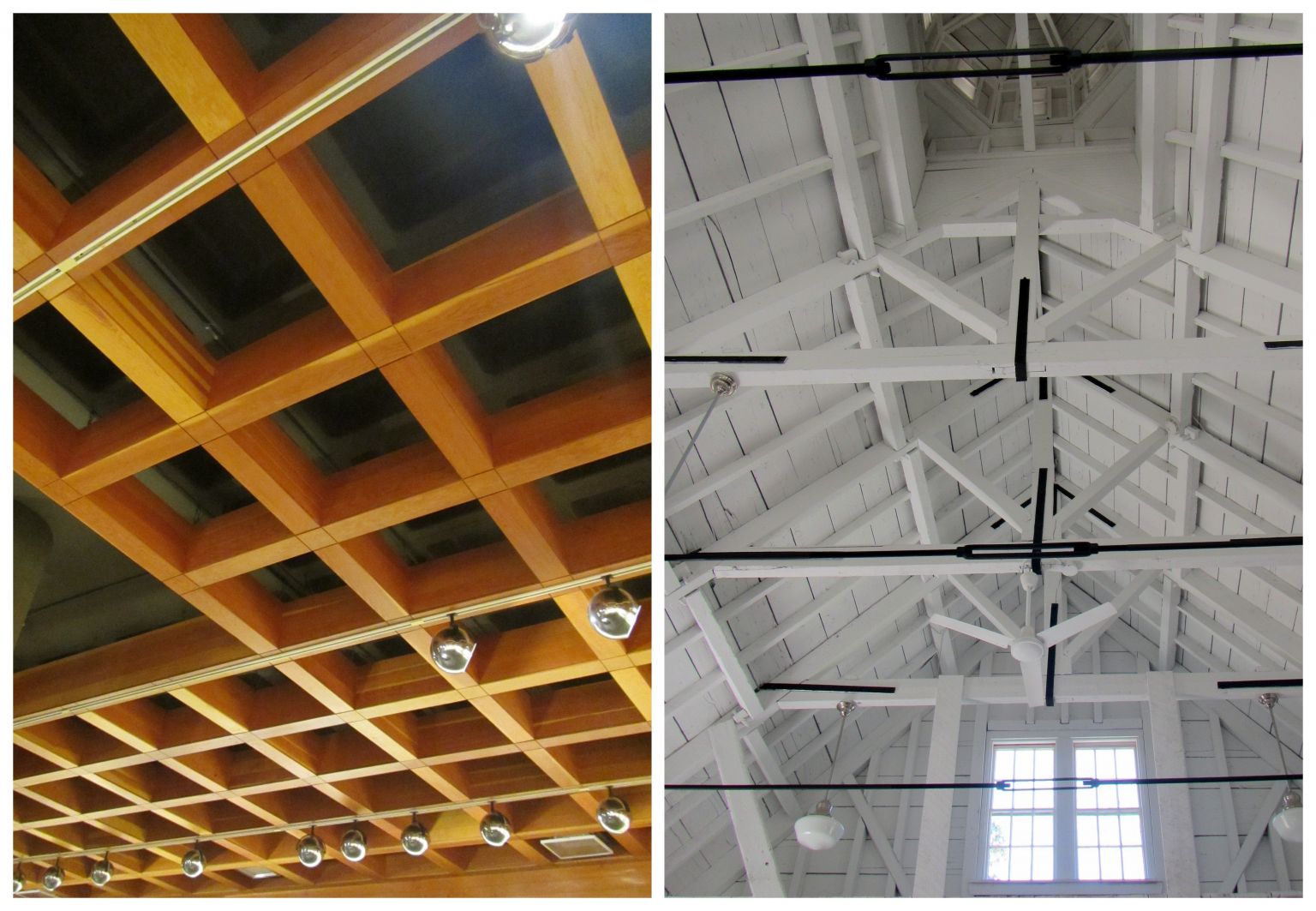 Here are a pair of photos shot from my childhood bedroom in our house on Walnut Street. The year is about 1966 and I think they show the general dreariness of backyards in those days. Maybe the whole city was dreary. Hard to remember. Lots of fences. 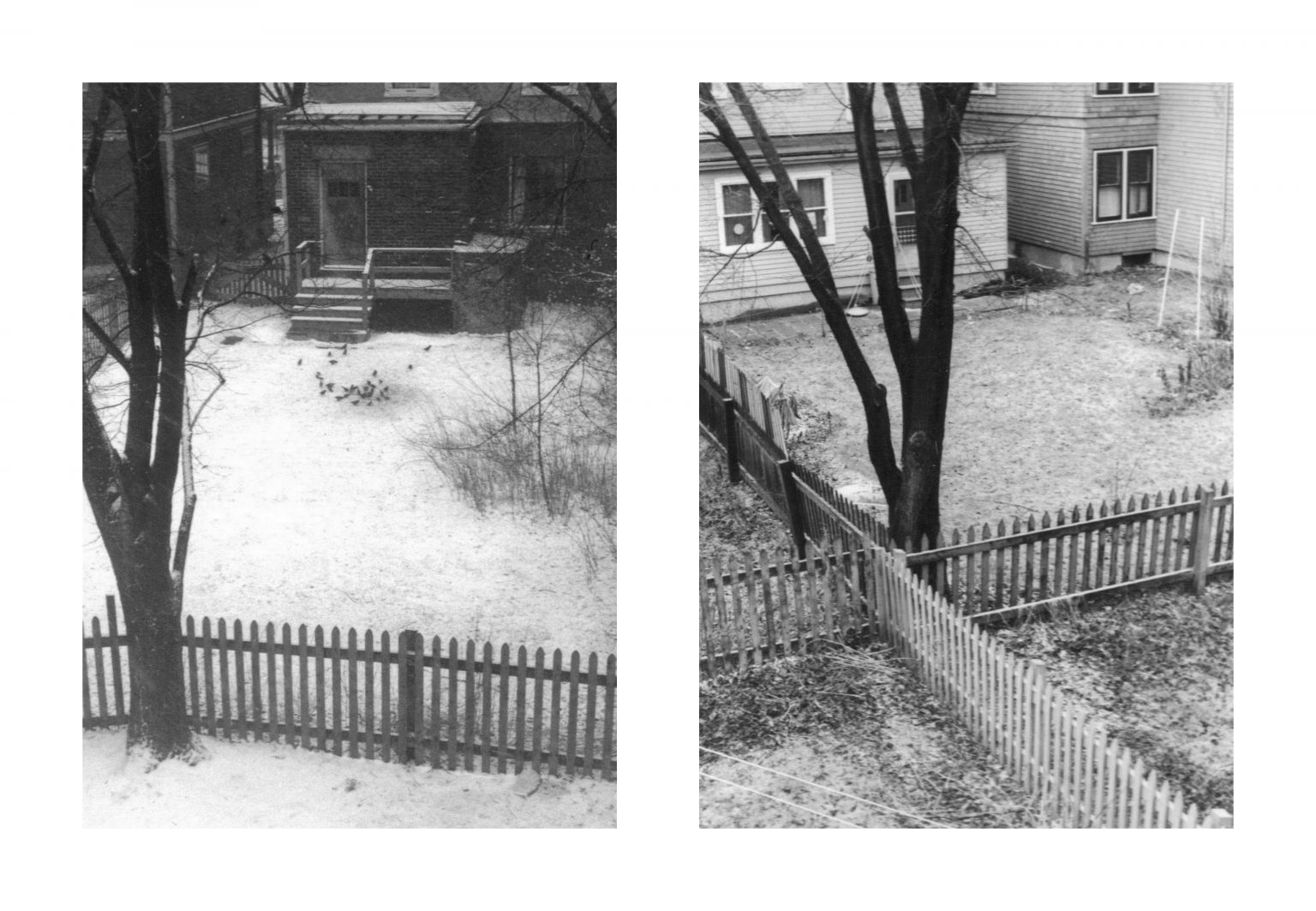 Groups of similar objects have a great appeal for me. Collages allow little visual collections to be made from old slides, most taken in the 1970s and 80s. Bollards and cleats on wharves: 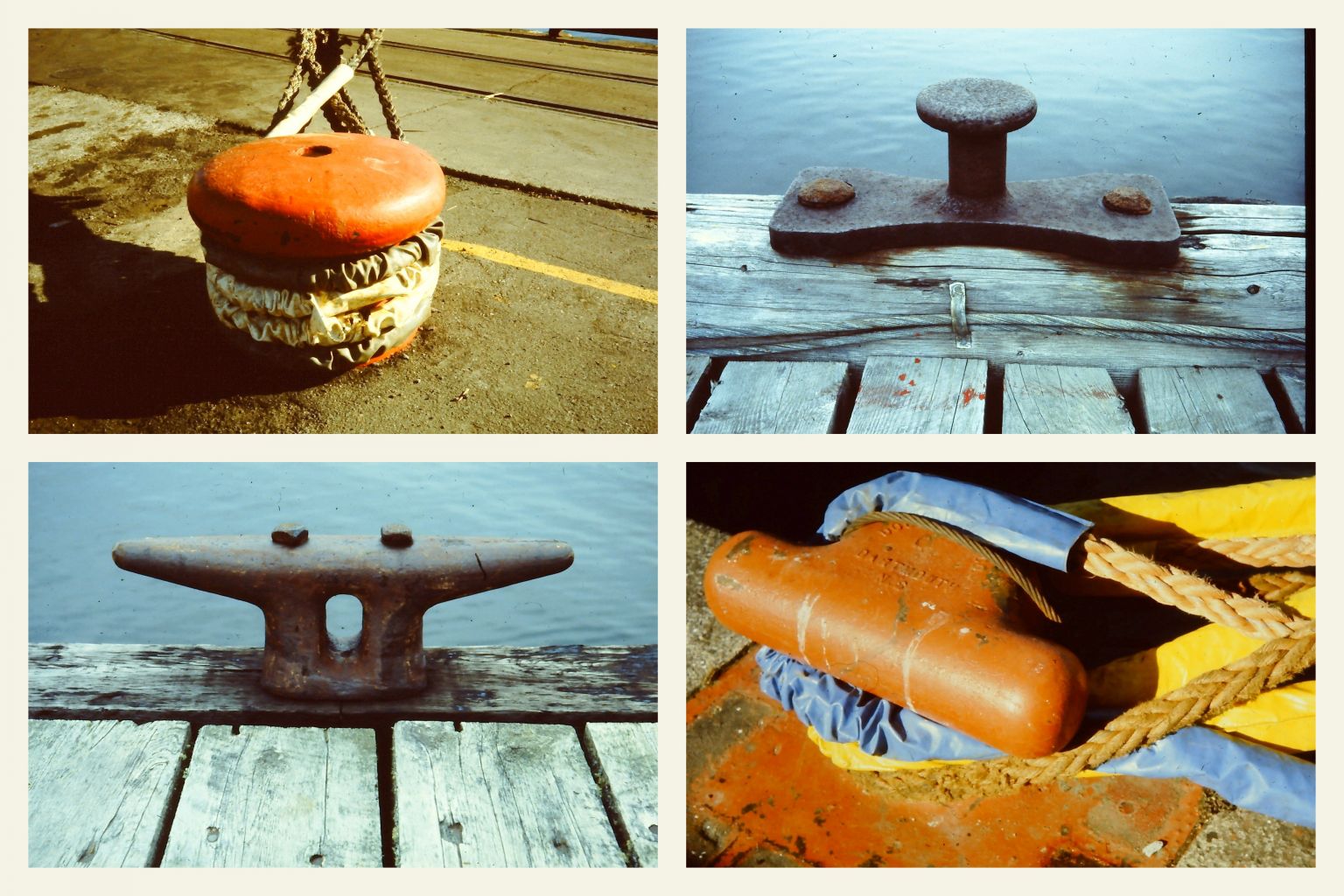 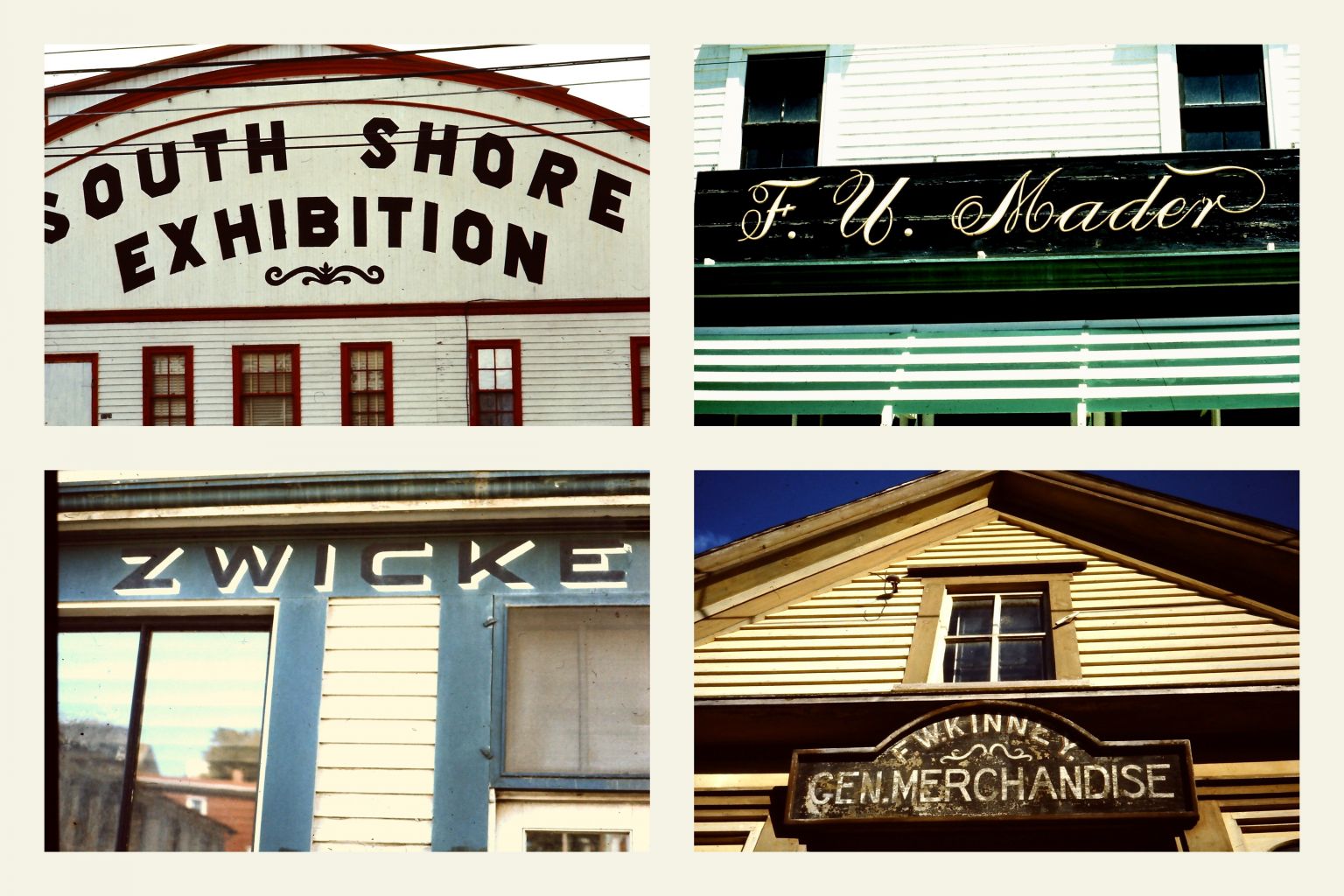 Victorian fence survivors from around the province (all now gone): 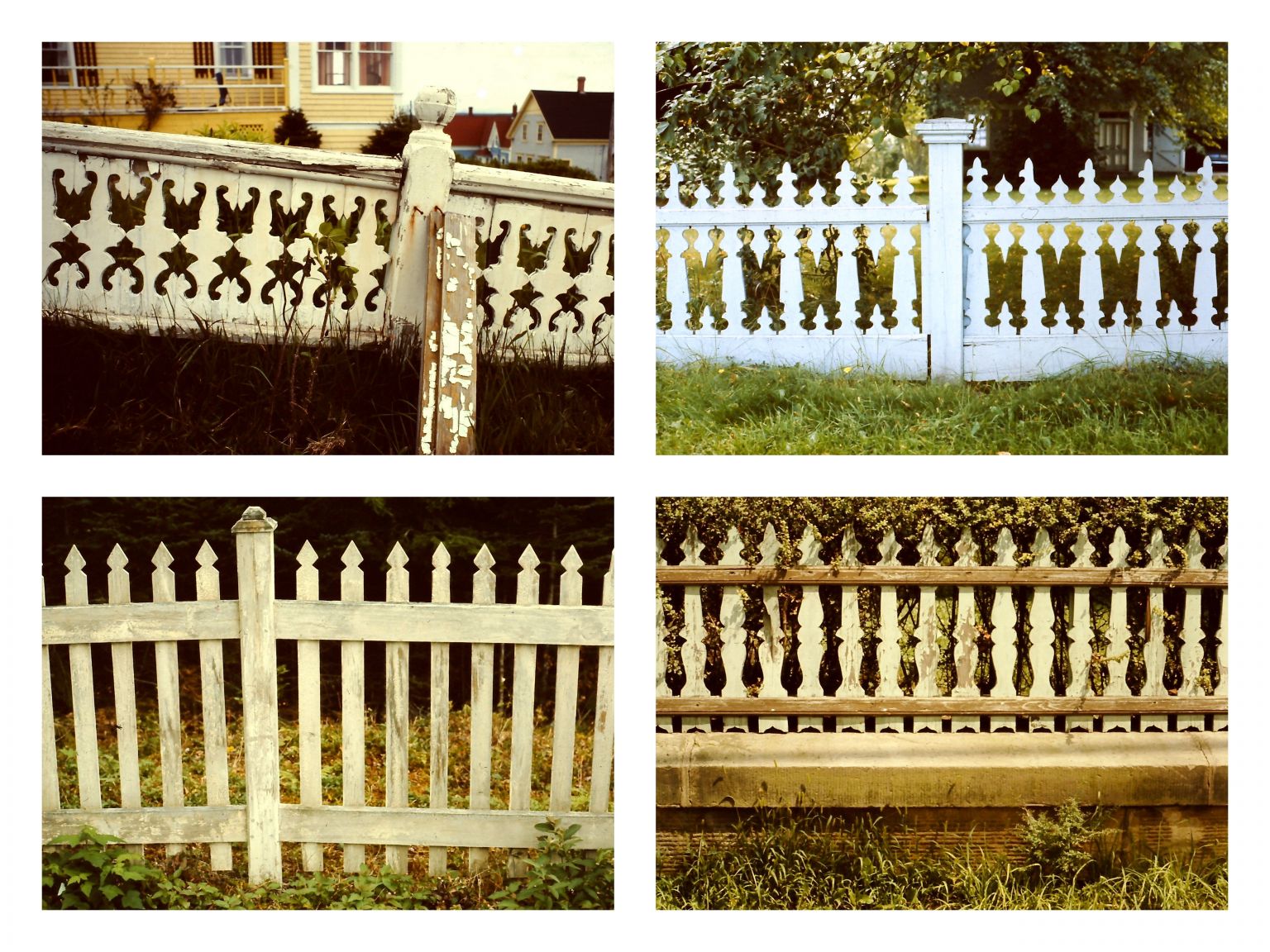 These days I’ll sometimes take a photo because I anticipate using it in a collage. First I had snapped a picture of the gate post that belonged to the long gone Dennis property on Coburg Road, because it was looking good. Later in the day I noticed the same ball design on the fence at St Matthew’s, Barrington Street, and decided to start a collection. 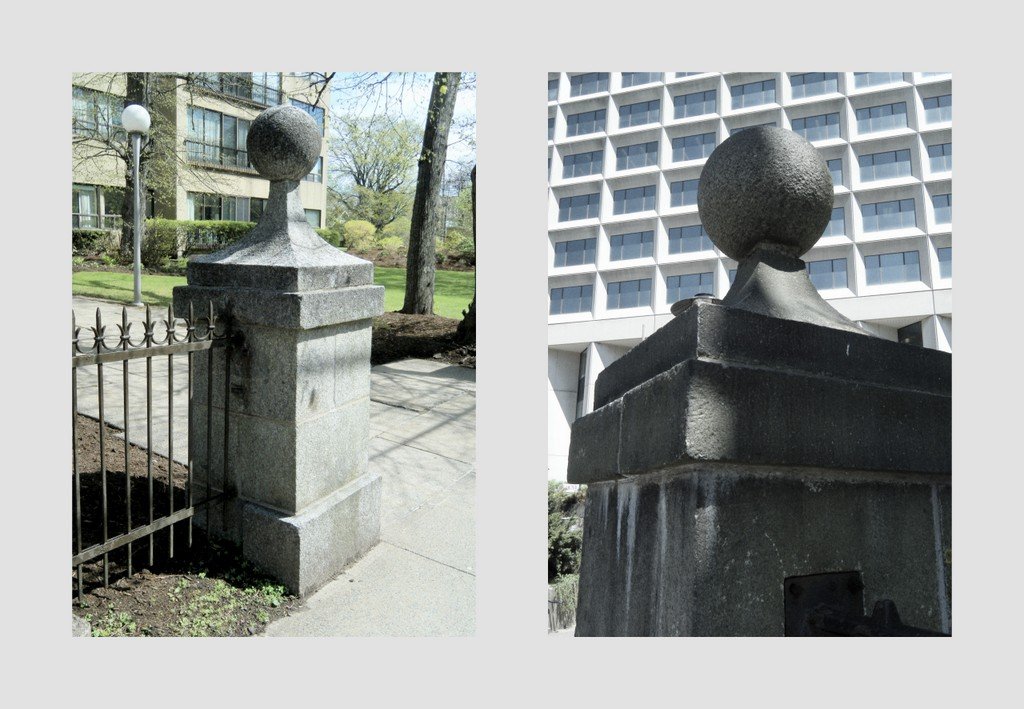 At the cemetery in Advocate quite a few monuments are topped with a geometric shape. I searched to find three different forms. 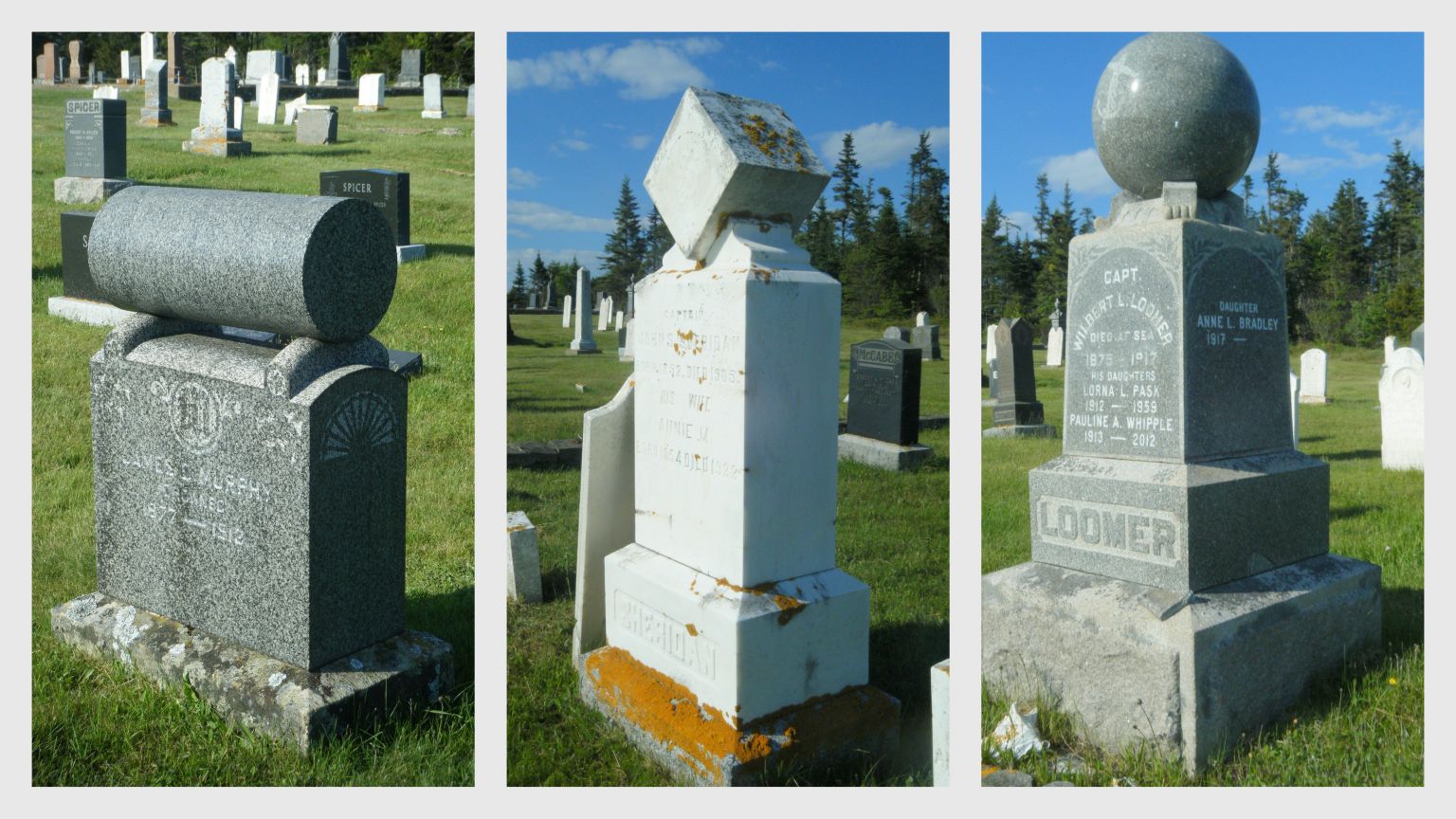 My rambles around Halifax on foot yield little nugatory observations. Robust back doors to buildings of a similar age: the Nova Scotian Hotel and the Bank of Nova Scotia. 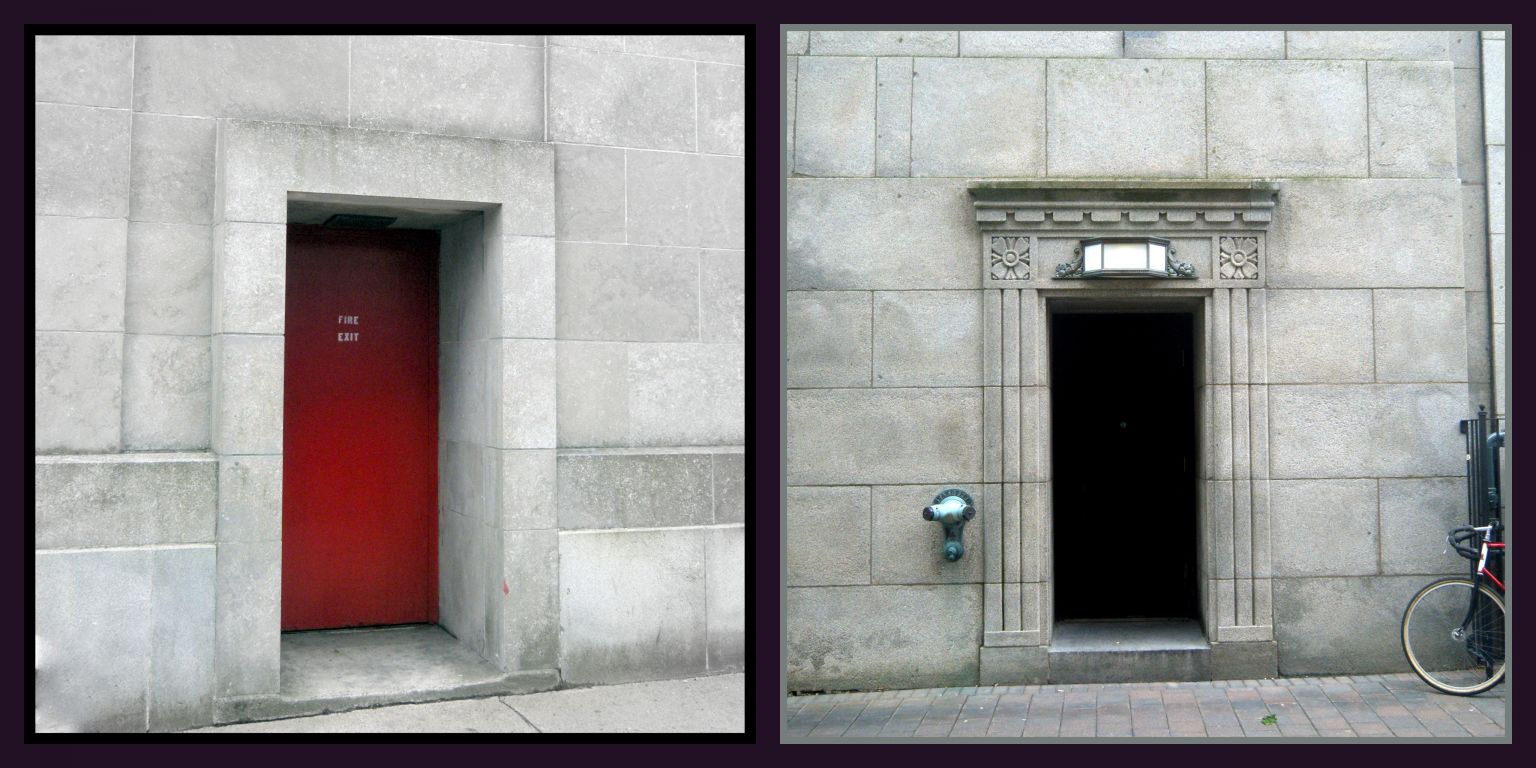 Examples of fine fencing, almost 200 years apart: the Scottish made railing installed around the Legislature c1817, and a clever contemporary design at the Seaport. 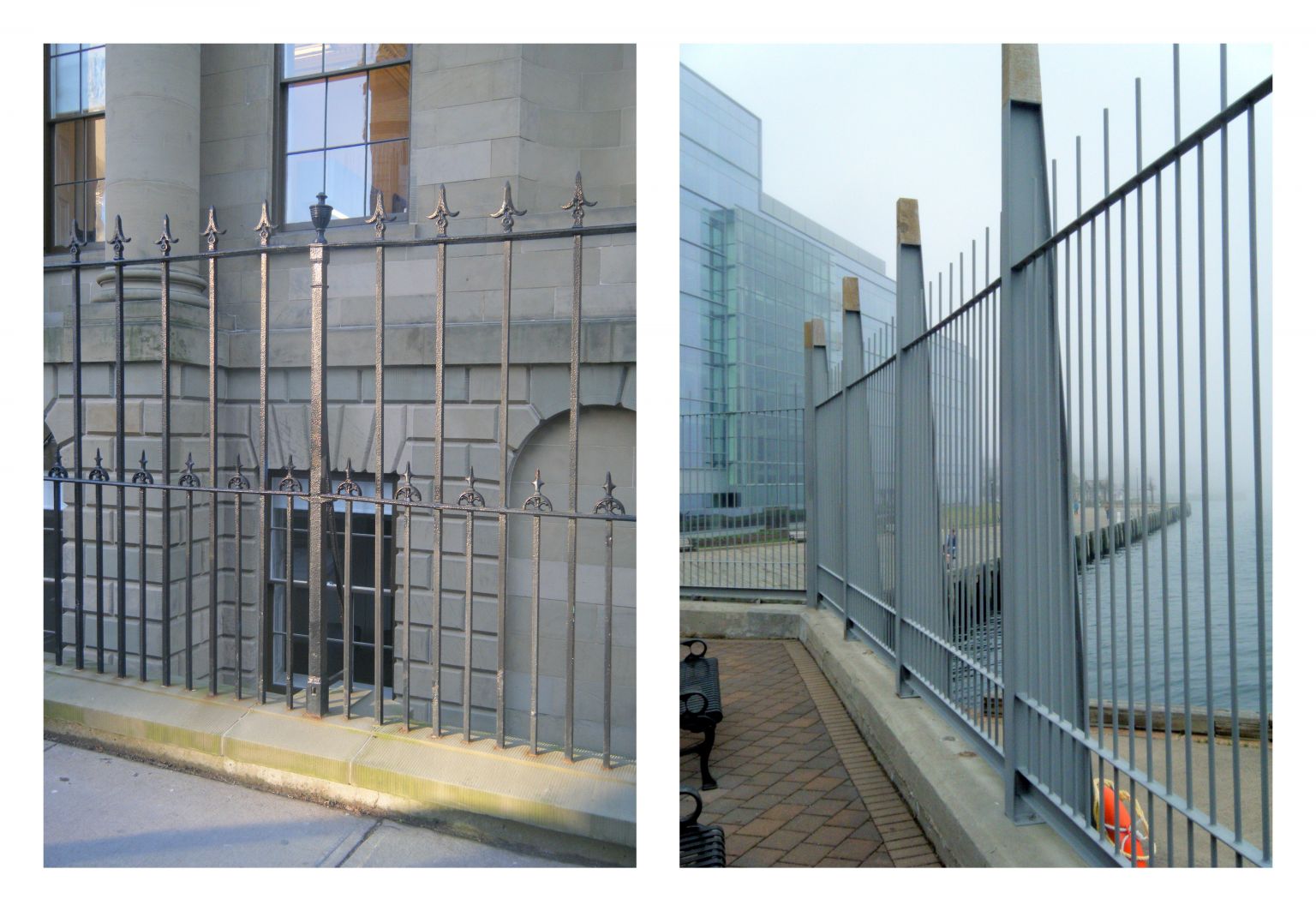 A walk from the Rotary up Chebucto Road generated a couple of pairs. Bethany United Church and the Municipal Air Port Monument in Saunders Park shared a pointy, upward, thrust. 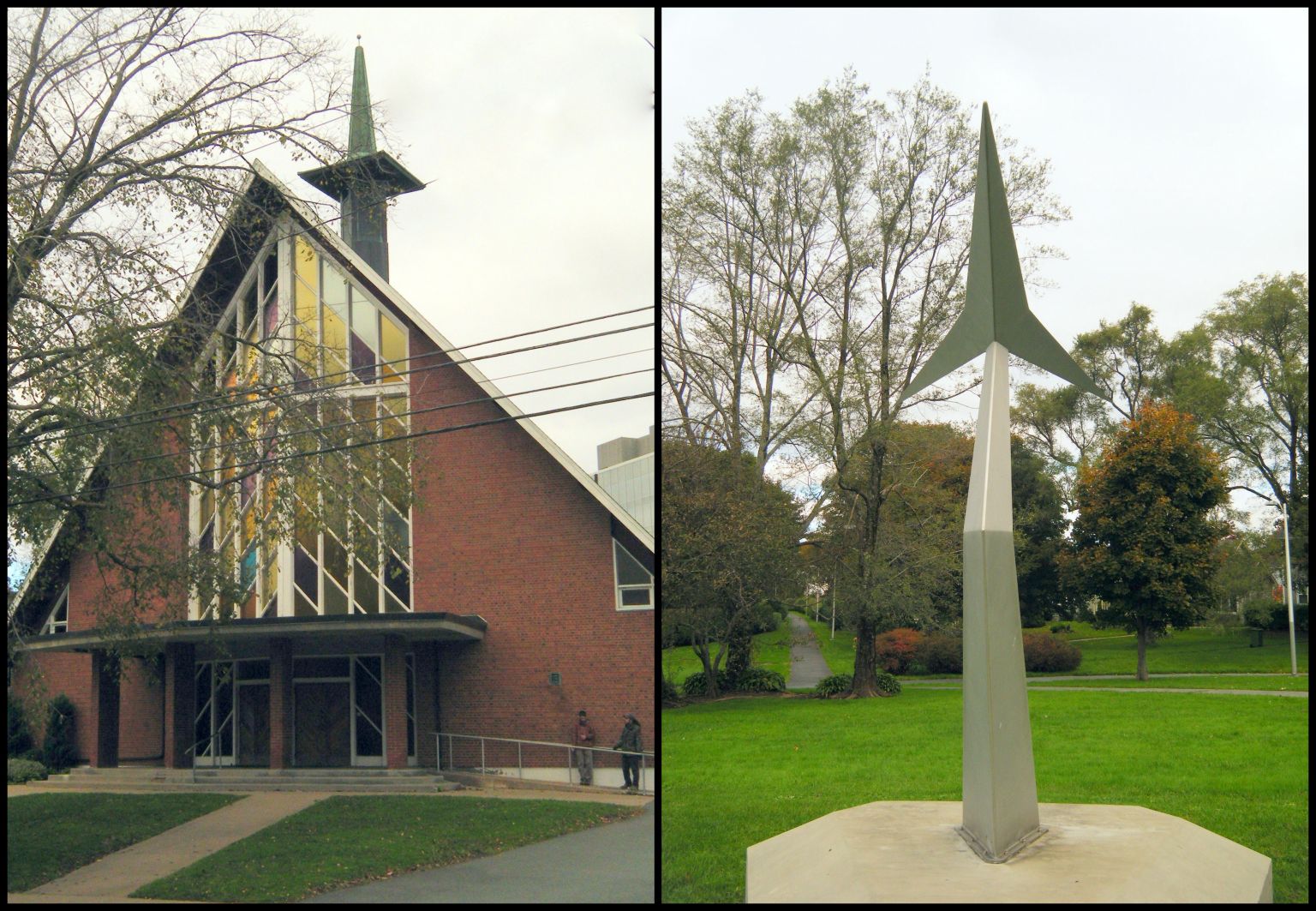 Surprising arches under the railway bridge that crosses Chebucto and massive brick arches on the IMP building near the Rotary. The things you notice on foot.

A bright winter Saturday morning  offered flattering light to east-facing buildings. The bright little shops on Queen Street were a delightful companion to the formal, garden face of Government House. Both are exercises in repetition and order. 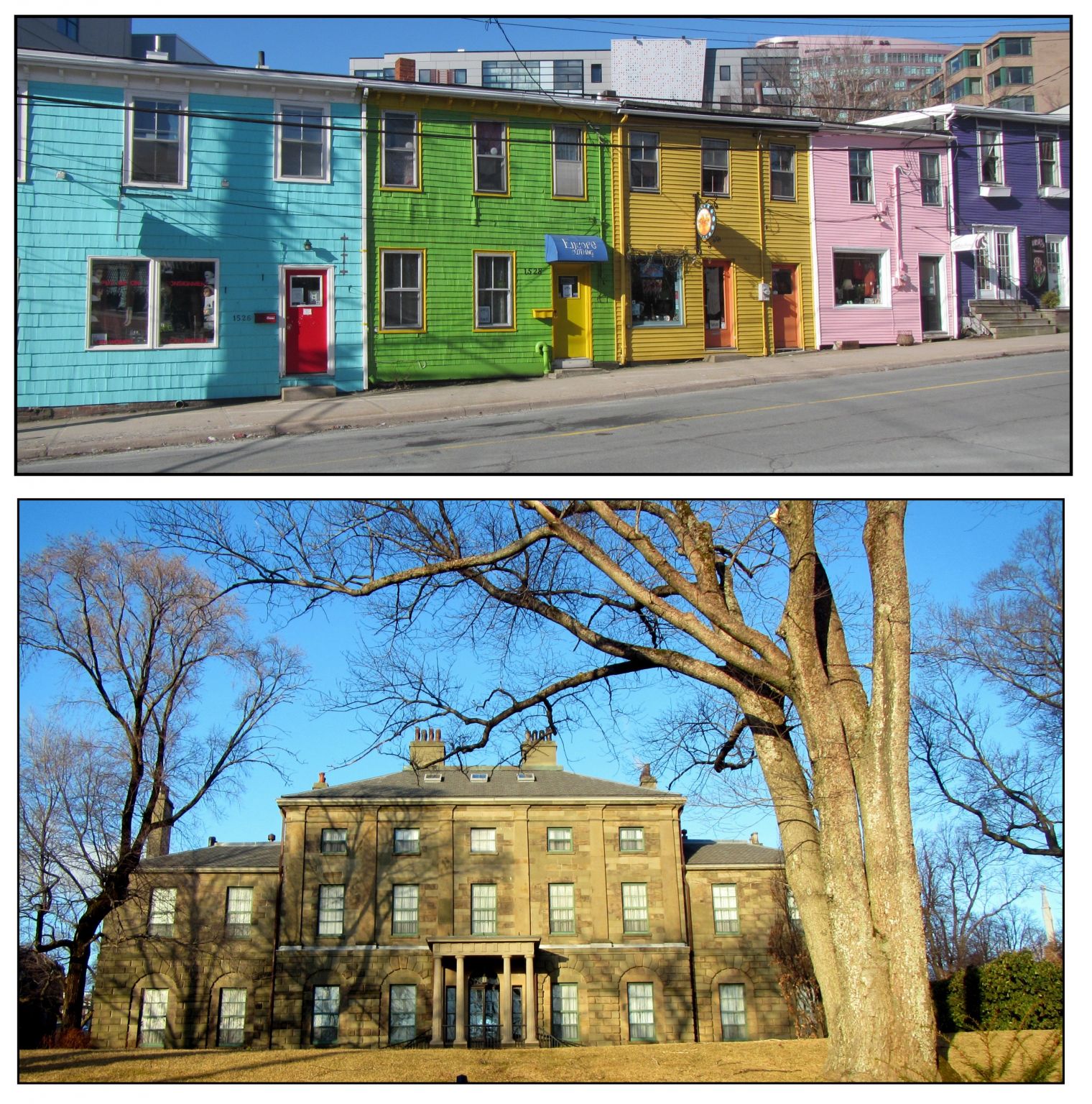 And a couple of gentle advocacy collages. Regularly I would whine about the disrespect for the community demonstrated by the  developers who operated the Spring Garden Road parking lot. Here is how their toll booth compared (poorly) to the Maud Lewis house. Amused me.

I was sad that the archaeological discoveries on the Central Library site were stripped of their agency. I like showing the beautiful cobble stones found at the Library with other surfaces we have lost. 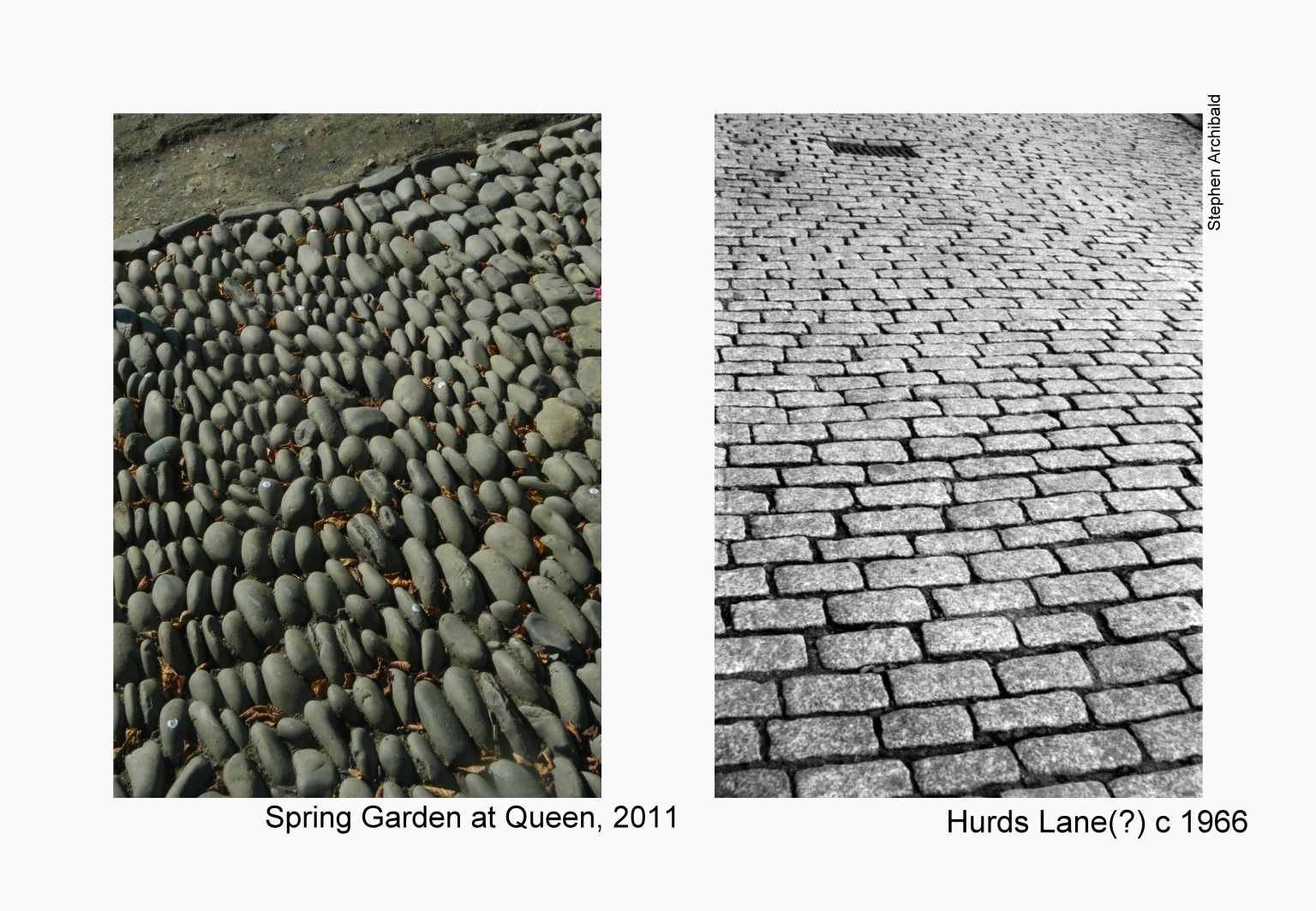 And finally a couple of 1970s photos that are my idea of a visual poem about granite. Top: granite stones, rounded by the glaciers, elegantly caged to anchor fish traps in St Margarets Bay, with bed rock granite shoreline in the background. Lower: further down the shore a culvert made of roughly quarried granite could live comfortably in a formal Japanese garden. It’s a poem about where we live. And a little bit about what we’ve lost. 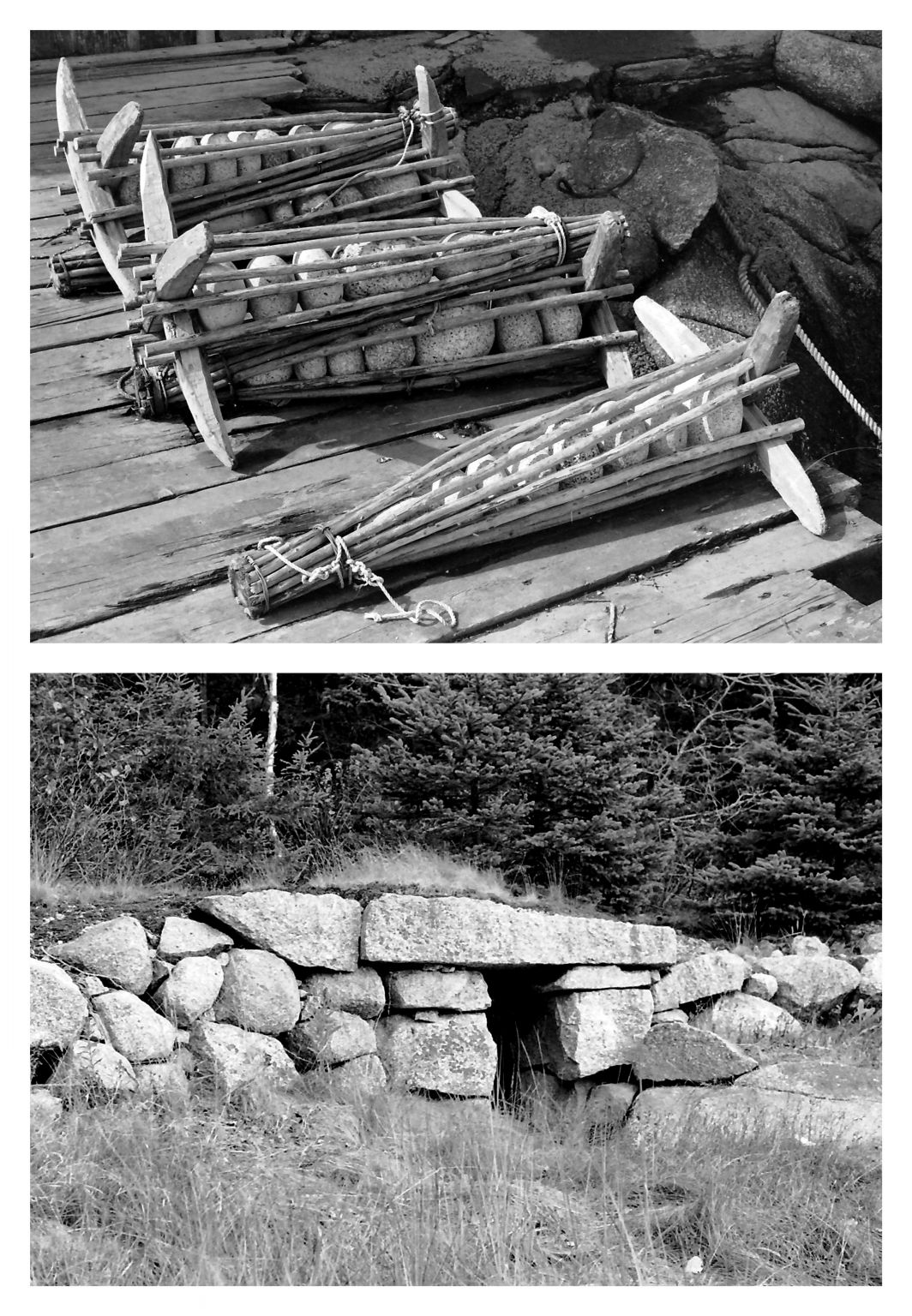