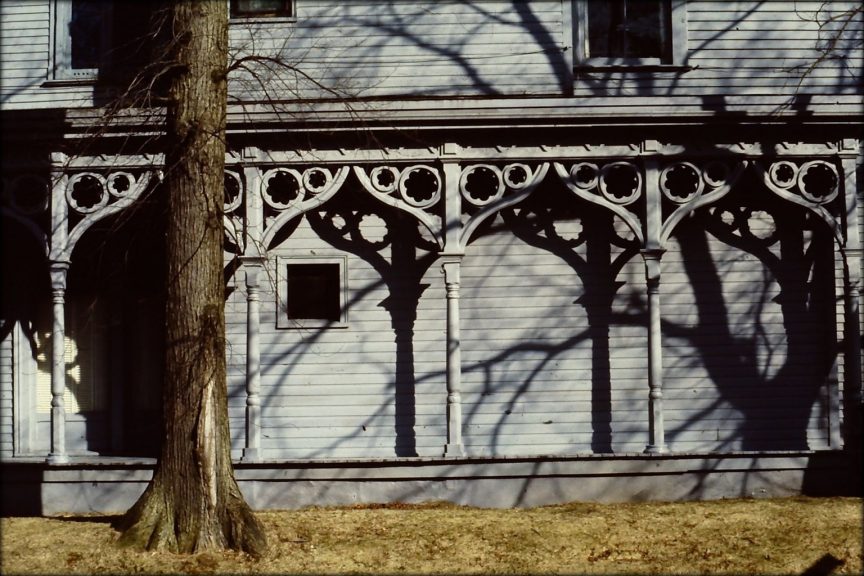 Some people like to believe that I have an endless supply of older photos, when the reality is I’ve posted virtually all of my collection over the years. However, I’ve just been flipping through sheets of slides and identified a few images that you might not have seen. Here are some random treats.

In the 60s and 70s there was a romantic vision, seen in magazines from away, that coach houses could be converted into residences rich in character and charm. Halifax was under-stocked in coach houses, but there was a swell example off Tower Road on Harrington Drive that spurred our imagination. It was torn down, around 1990 I’d guess. 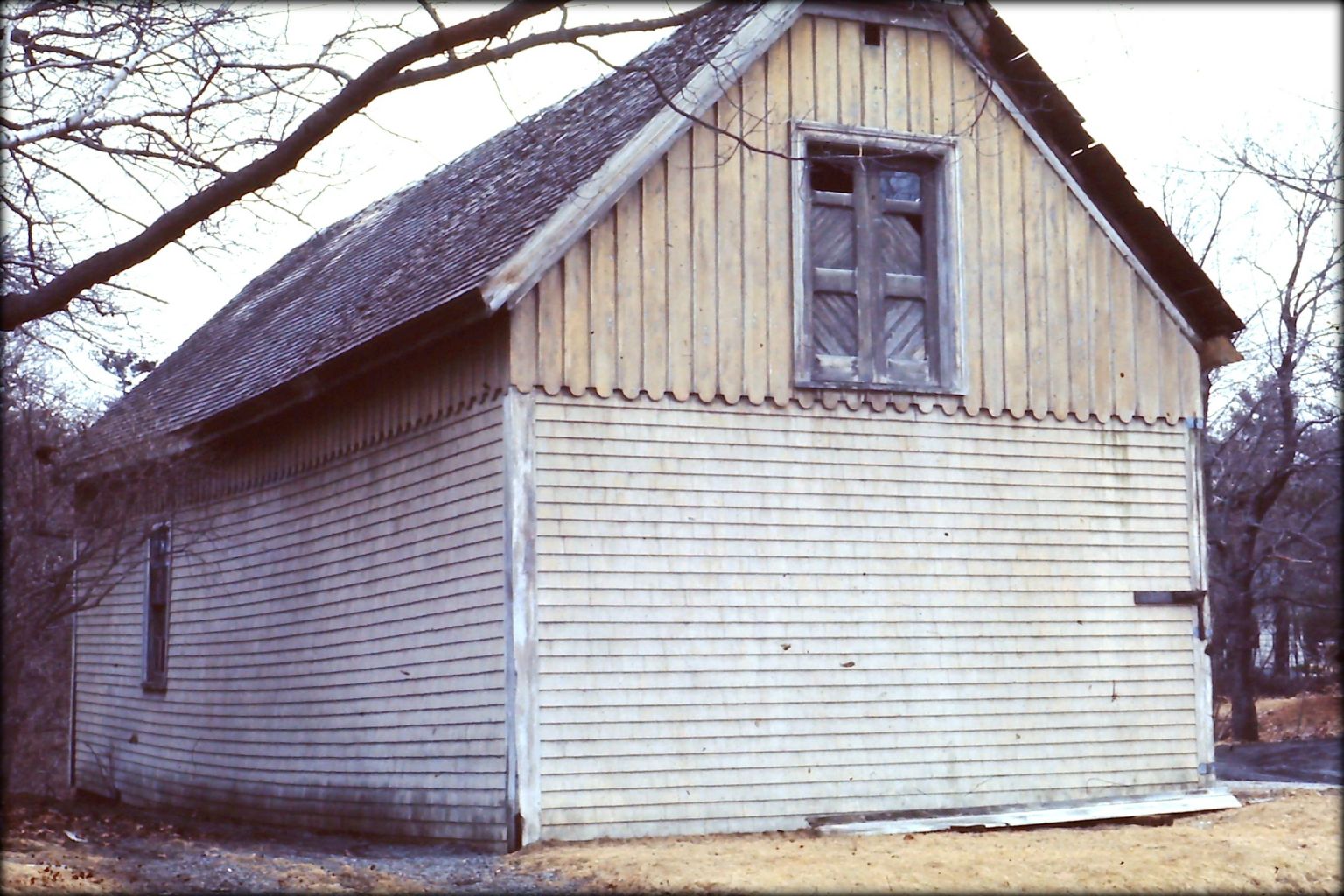 This very special, carpenter Gothic woodwork still exists on Lucknow at Victoria Road, but the paint colour of the house has changed (not sure if it is pink or coral) and an unfortunate railing has been added. This battleship grey was a perfect canvas for winter morning shadows. 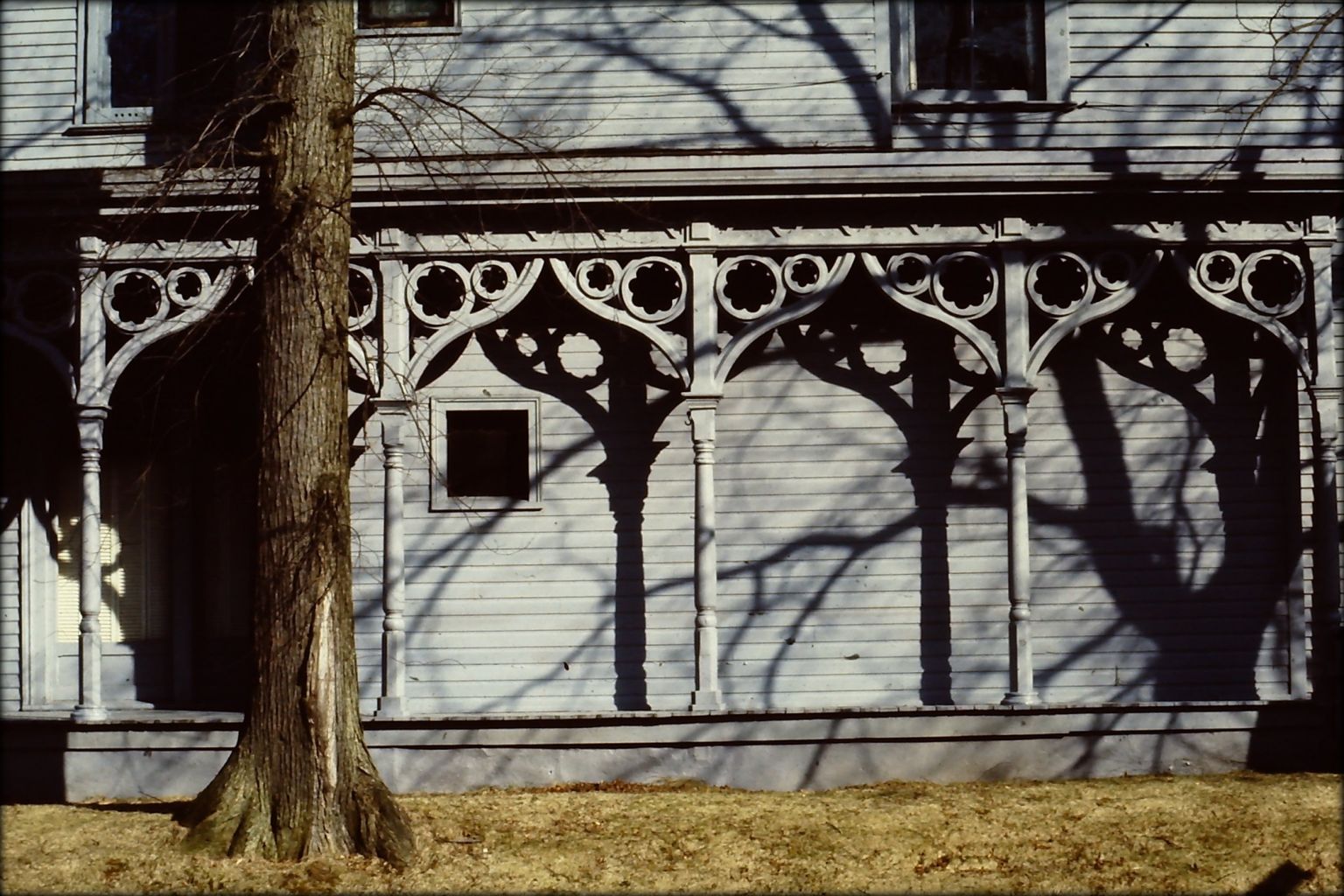 Nearby on South Park Street, the woodwork on these verandas is also still around but the photo records their old, brown and cream paint job, a colour scheme that was popular for much of the last century. 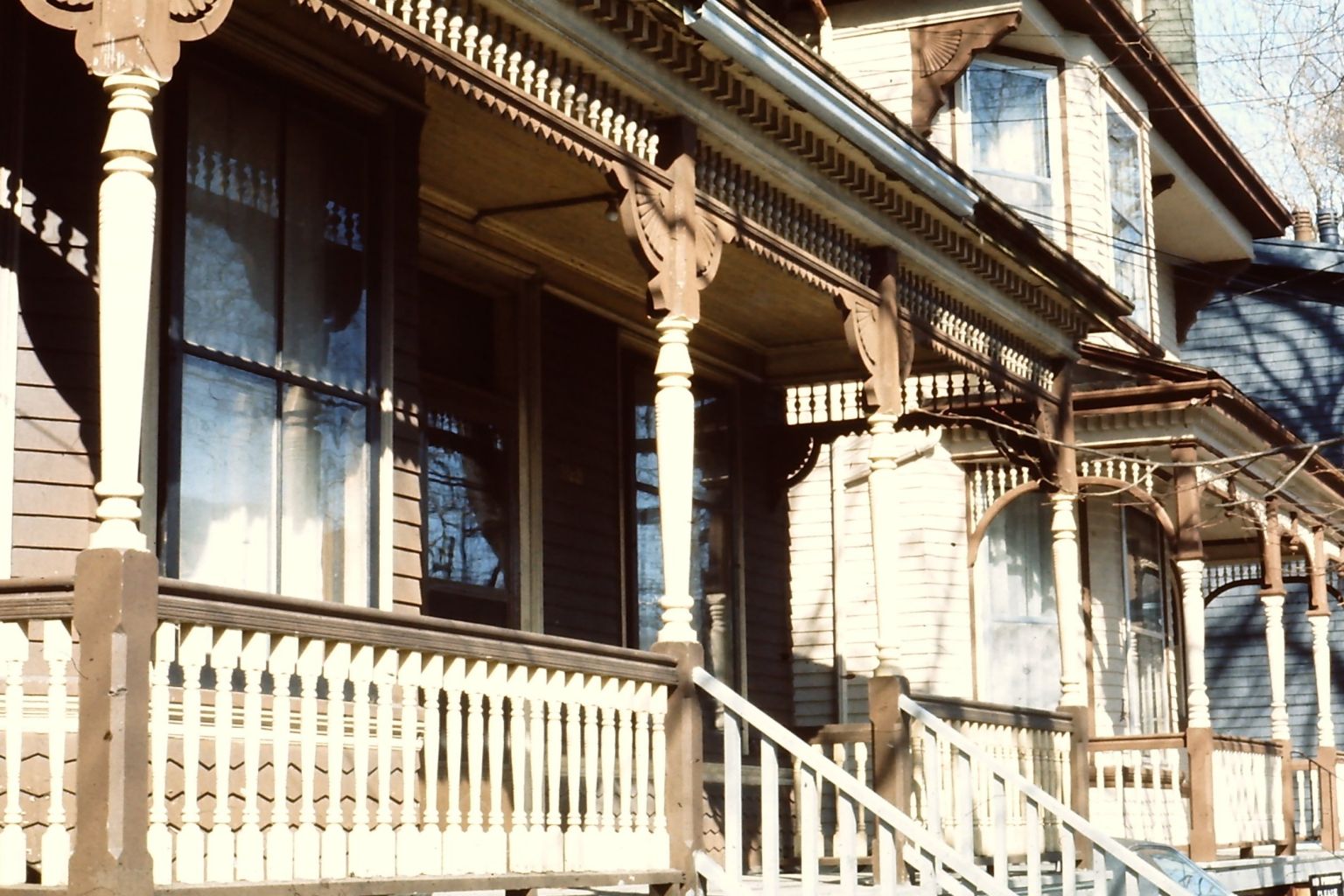 There was a time when Halifax’s connection to the Titanic disaster was not particularly well known or commemorated. In 1984 I made a special effort to visit the Titanic graves in Fairview Cemetery. Have you ever been? Once is enough. Our Titanic world changed forever when the movie came out in 1997 and the adventures in disaster tourism began. 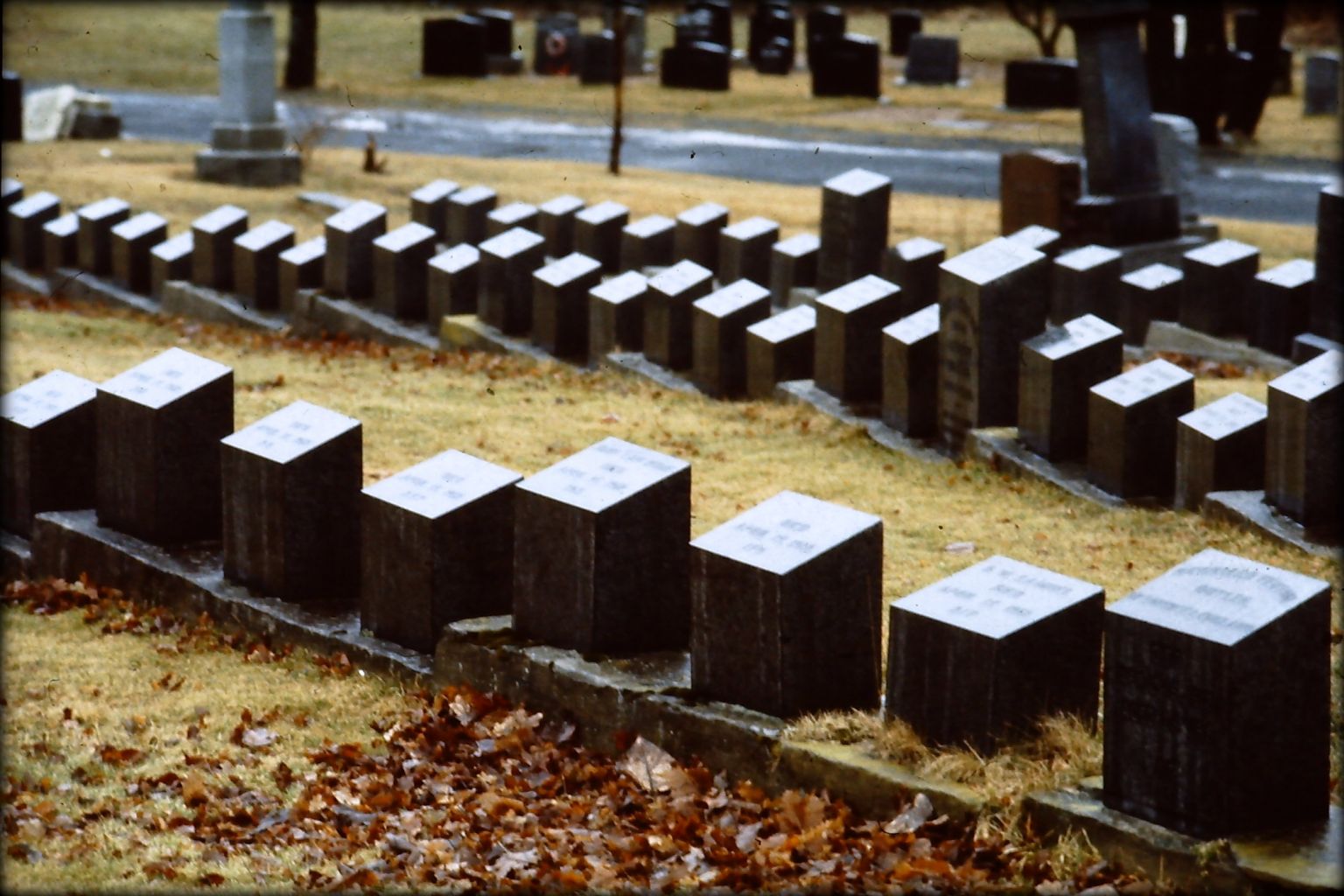 The Hydrostone shopping district has always been beautiful, but not a destination the way it is today.  A war surplus shop and the much-loved Tomaso’s Pizzeria were the draws when this photo was taken in 1974. 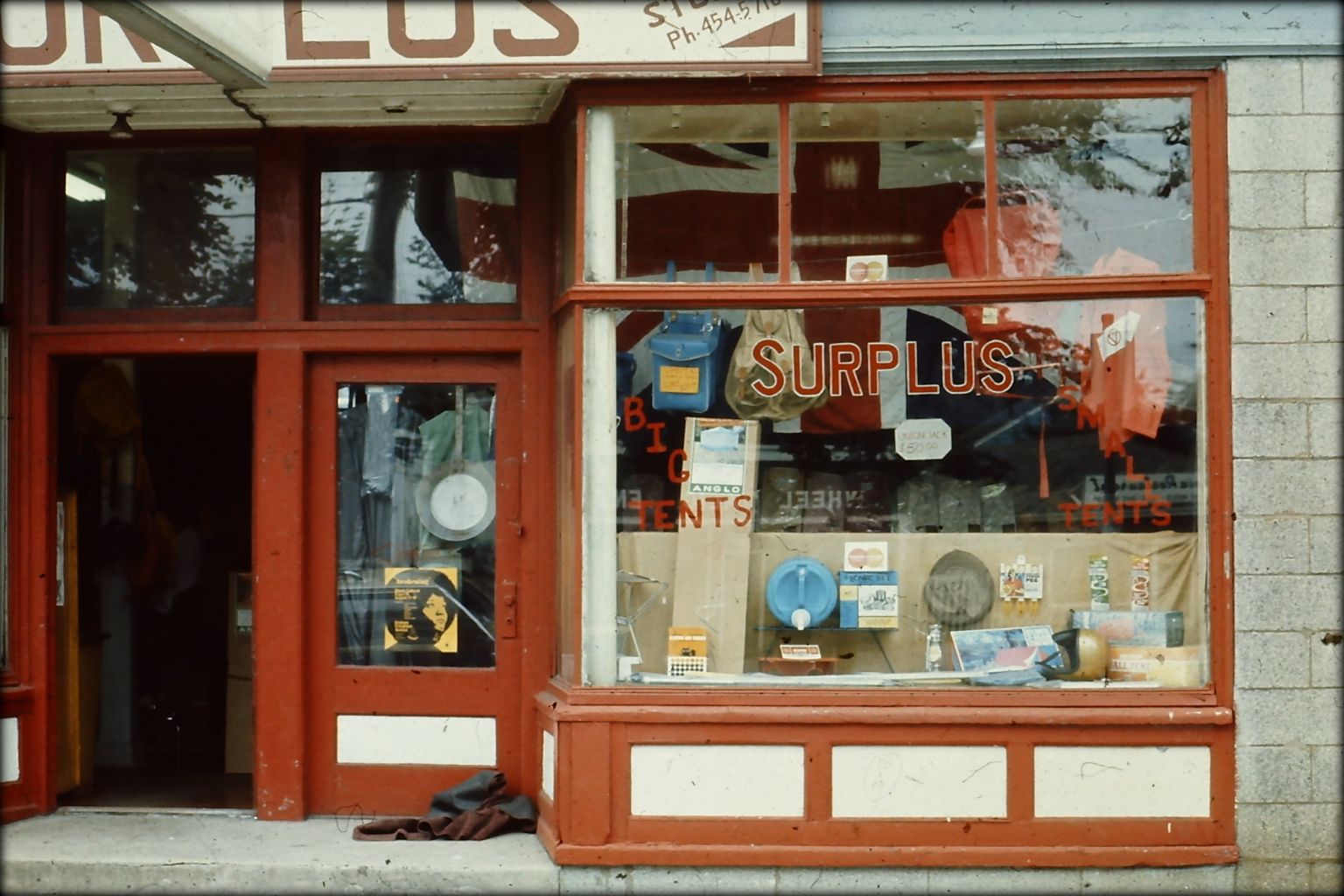 The Dockyards have always been mysterious to me, a forbidden world in the middle of the city.  A walk on the bridge was a good opportunity for a gull’s eye view, particularly of the Dockyard clock, in the little cupola on the building in the centre. 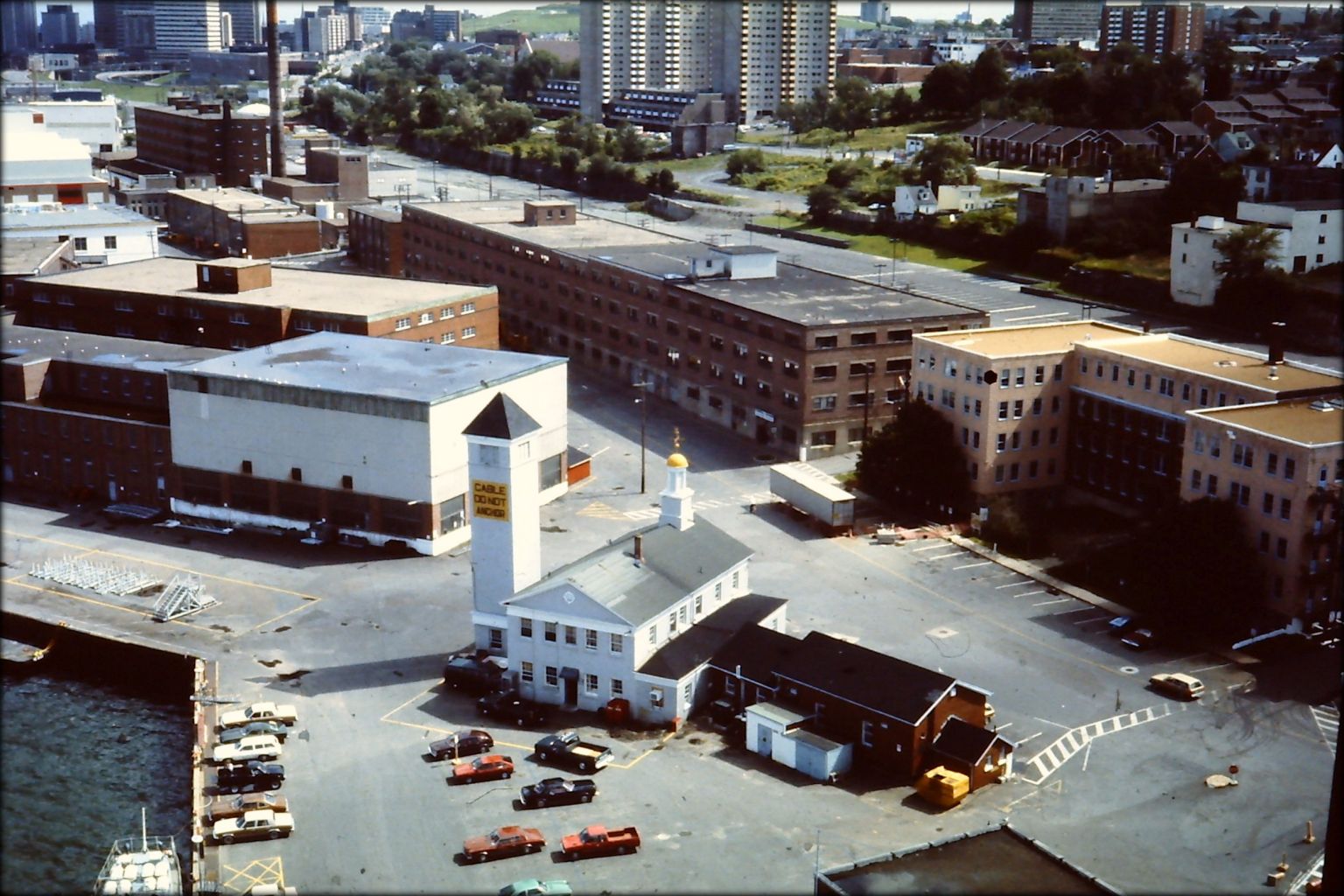 Here’s a view from the water. The gold-domed cupola was on a fire hall built in the late 1940s. I assume the tall tower was for drying hoses. Remind you of Venice? Just a thought. 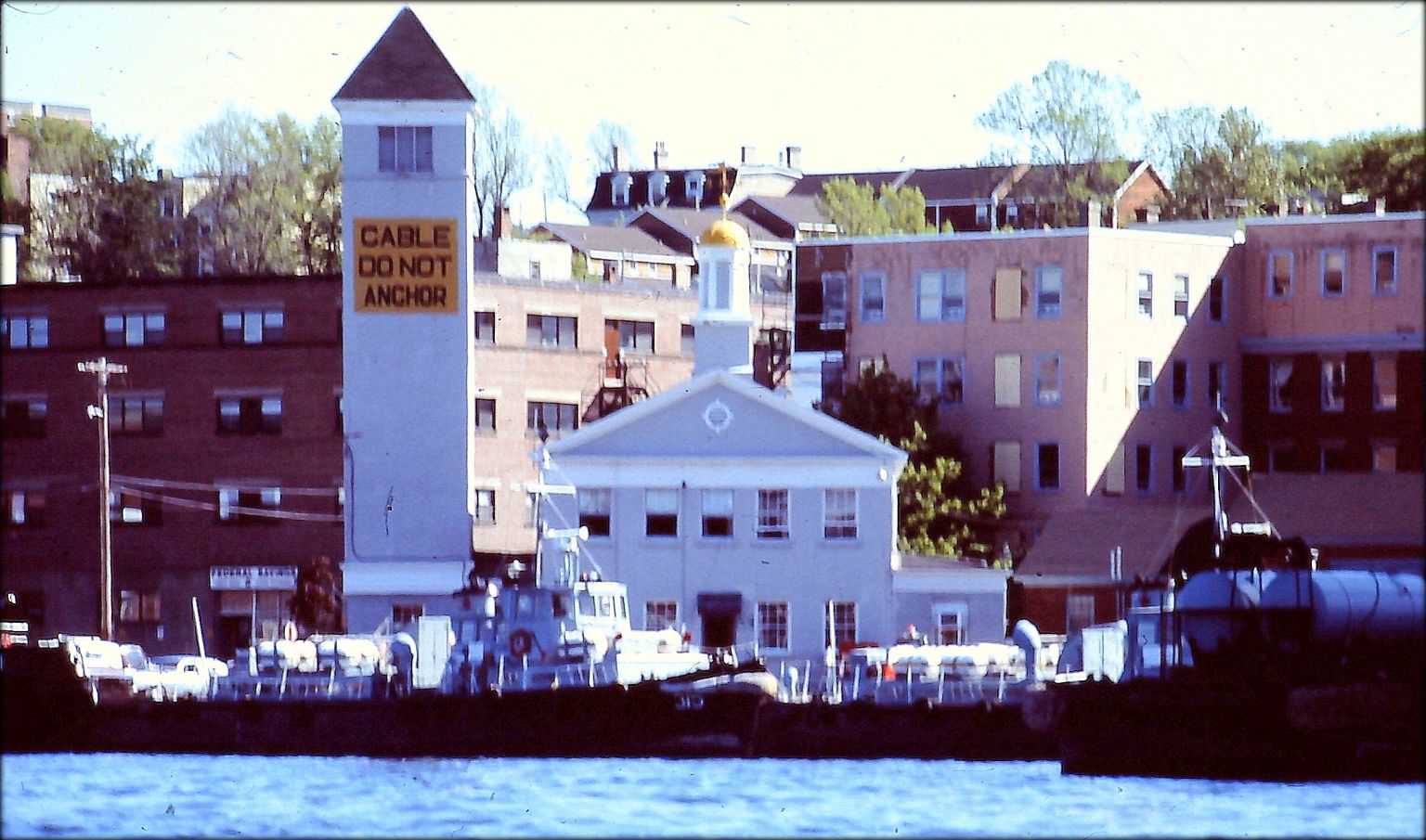 Turns out the British-made clock is a survivor. In 1772 it was installed on the Dockyard’s Number One Store, a wonderful, huge building seen here in a c1883 Archives photo. 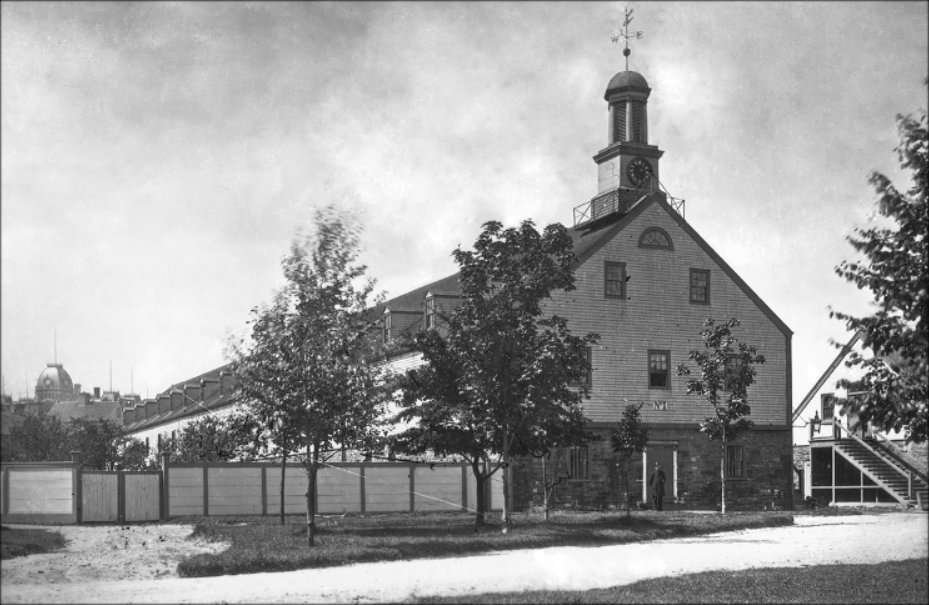 After the fire hall was demolished in 1986, the clock was given to the city and is now the feature of Chebucto Landing, as a Monument to our long heritage of Lost Buildings. 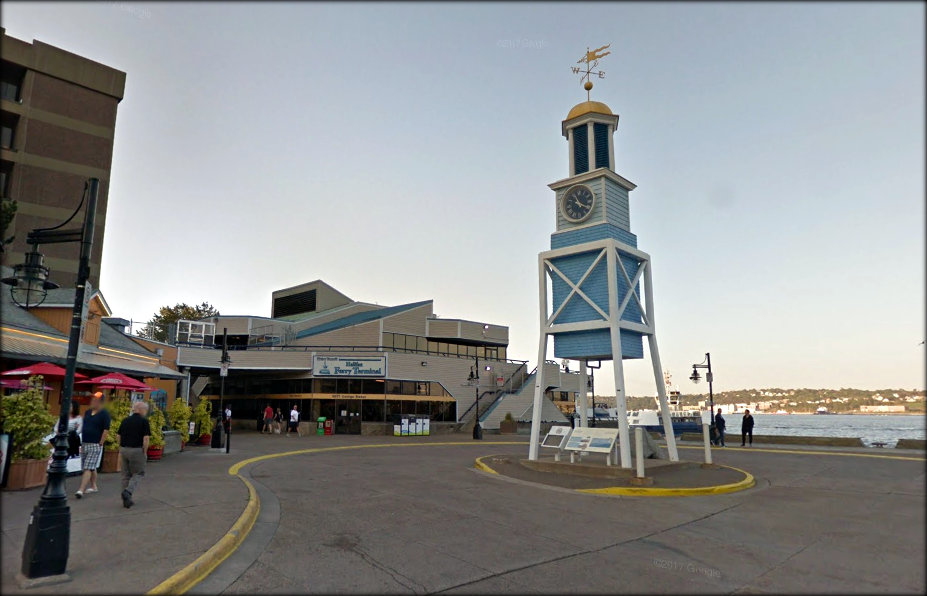 When I photographed the Dockyard fire hall from the water, I was sailing up the harbour to look at one of our first Tall Ships events. Further along the waterfront, the power plant was still looking grim, despite the picturesque vessels tied up alongside. Who would imagine it could be converted into the shiny Emera headquarters. 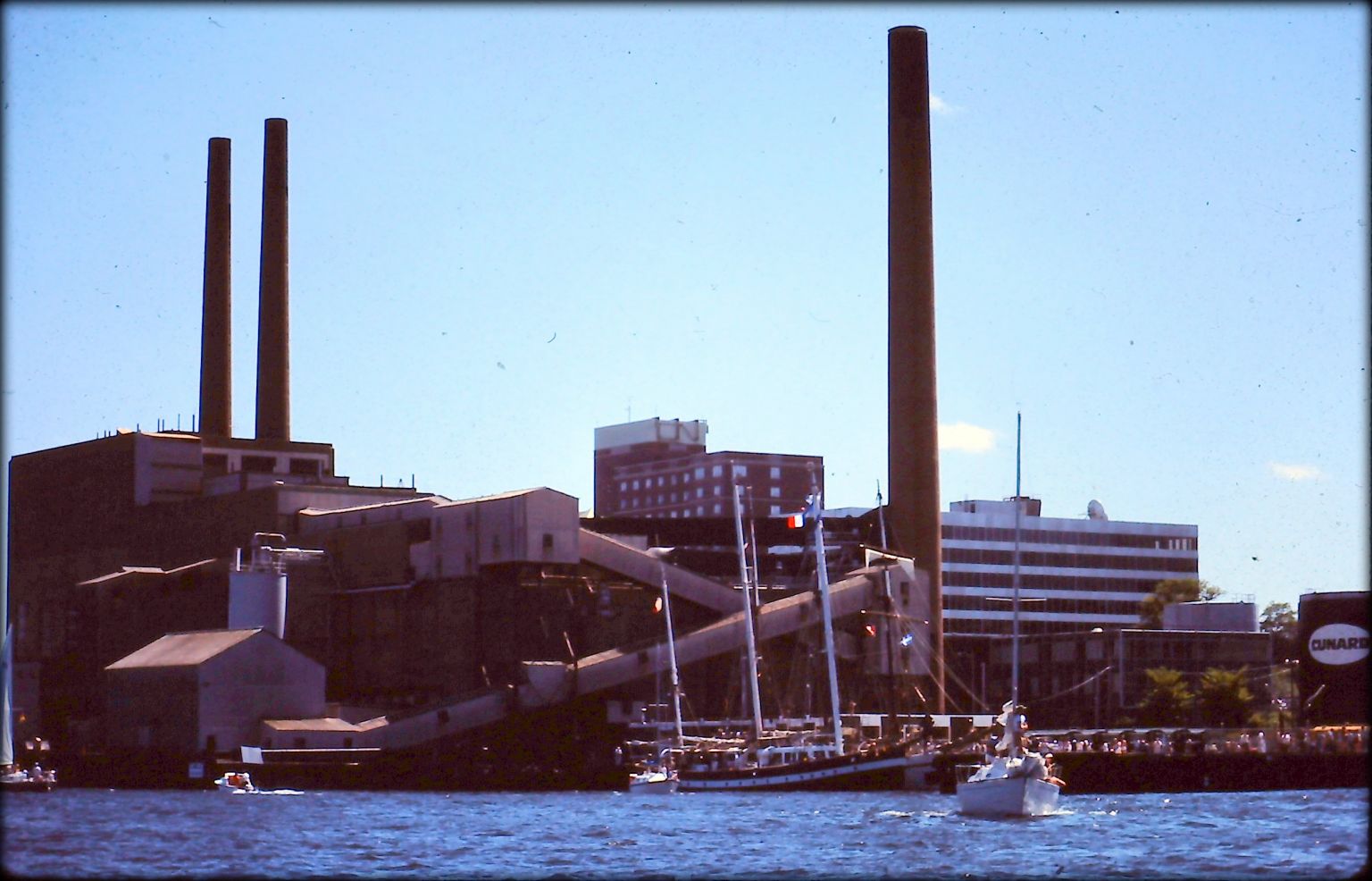 See the oil tank in the far right of the photo above? It was part of the Cunard Oil operation. Here is what their site looked like from the window of Sheila’s early 1970s apartment on Hollis Street. We cultivated an appreciation of the “industrial aesthetic.” 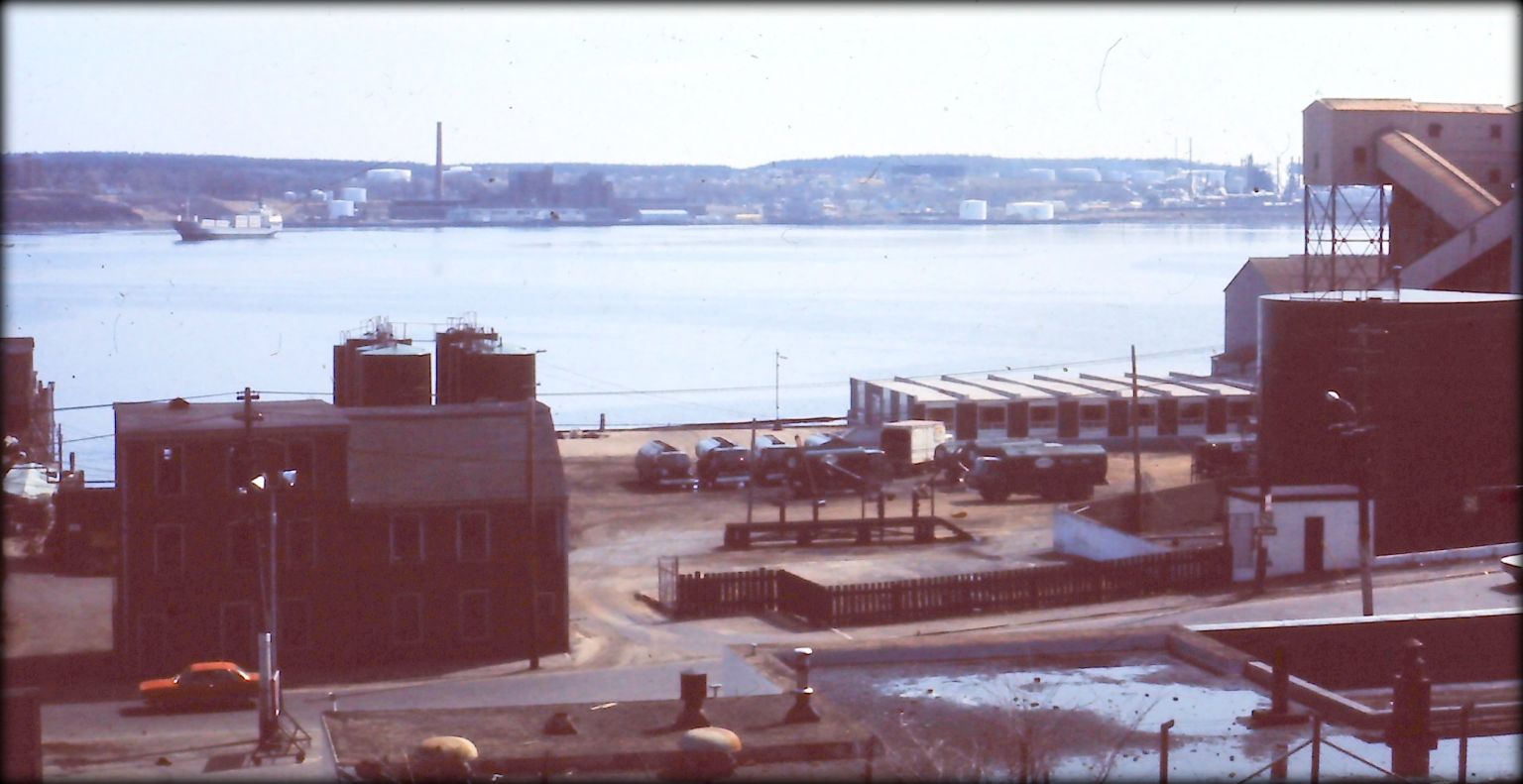 A more accurate muse for this little tower, amputated from its building, is a painting by the fifteenth century Dutch painter Hieronymus Bosch. A group of beggars in fanciful hats are supported by short crutches and artificial limbs. 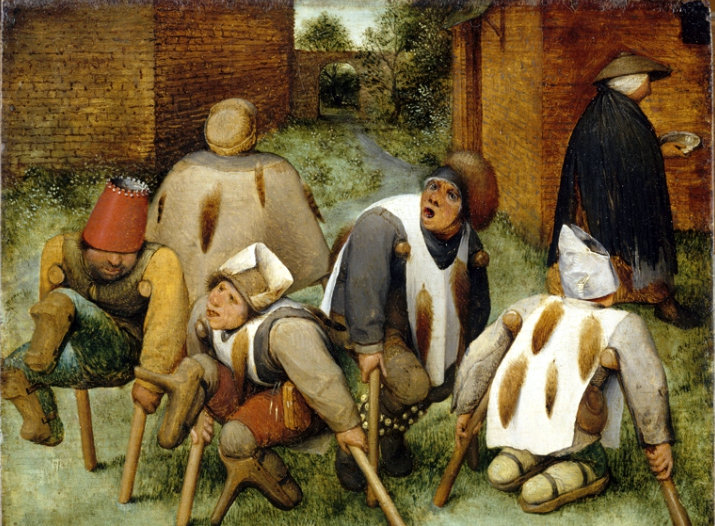