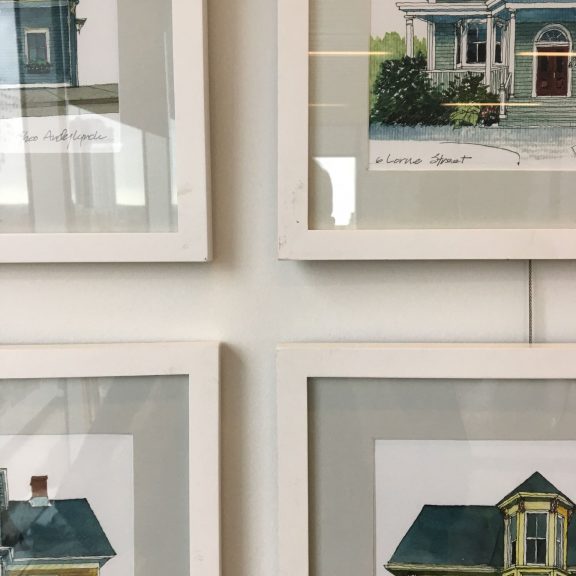 From the very founding of Halifax, folks have been drawing  their community. These days it feels like there is a resurgence of sketching, and you can see some great examples with a visit to Urban Sketches, an exhibition on the 5th floor of the Halifax Central Library. Half of the drawings are of Halifax buildings and streetscapes, and the rest are of charming Lunenburg. 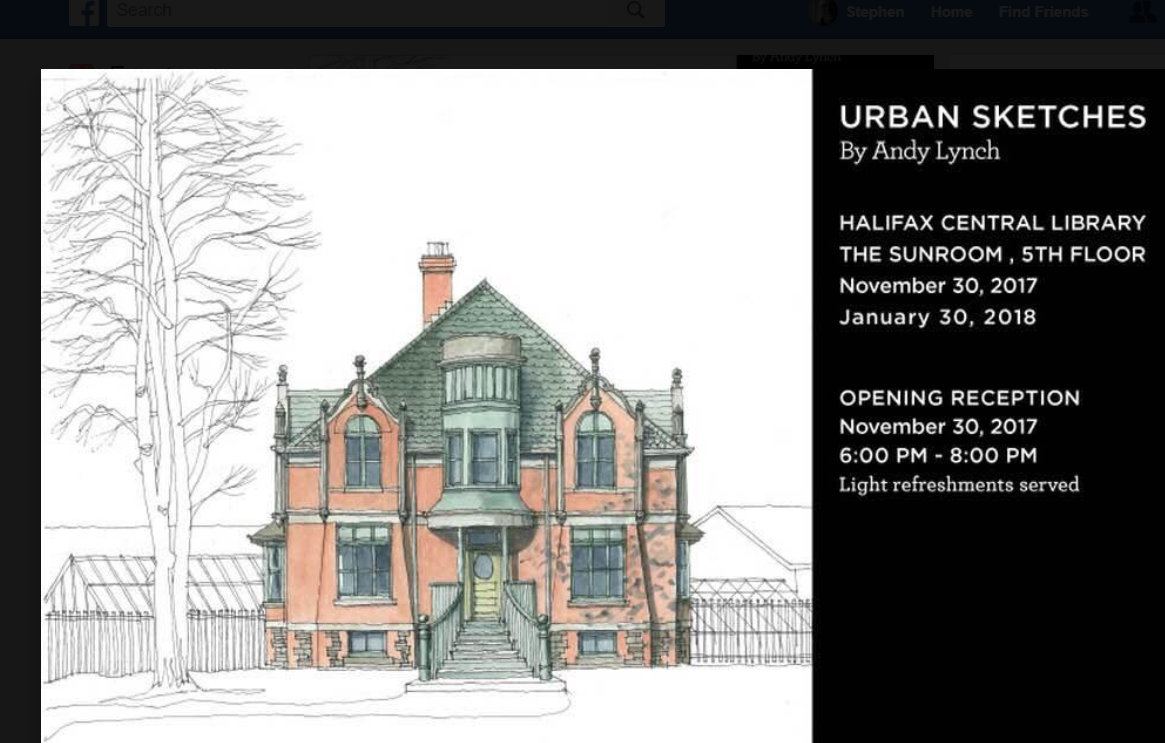 The artist is my friend Andy Lynch, the founder of Lydon Lynch Architects, who has more time to draw for pleasure in his retirement. I helped install the show and it was fun to see patrons of Pavia engaging with the images as they passed by with their snacks. 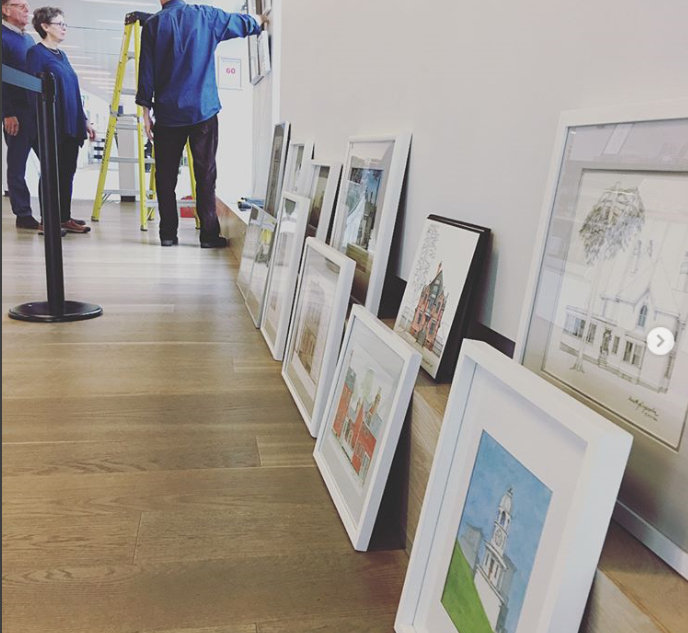 After the opening I noticed a Tweet from Stephen Cushing. He mused that Andy’s drawings “have me itching to start sketching again.”  Many of us have that sketching itch. Let me show you what I do. 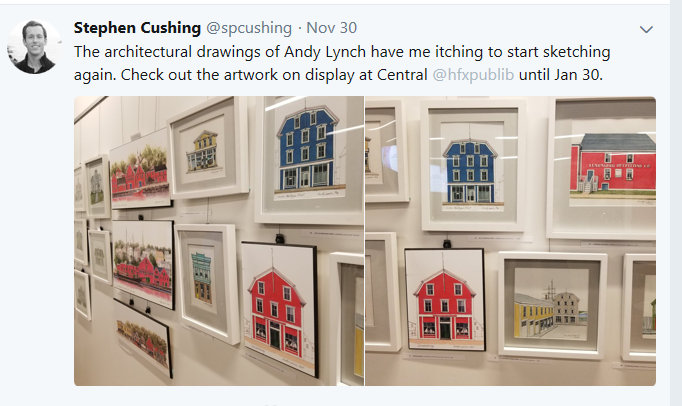 For me, the sketching breakthrough was the discovery of Moleskines, the perfect little notebooks that come in many colours and paper styles (the sketchbook is my fave these days). As you can see, black has been my choice since the early 2000s. 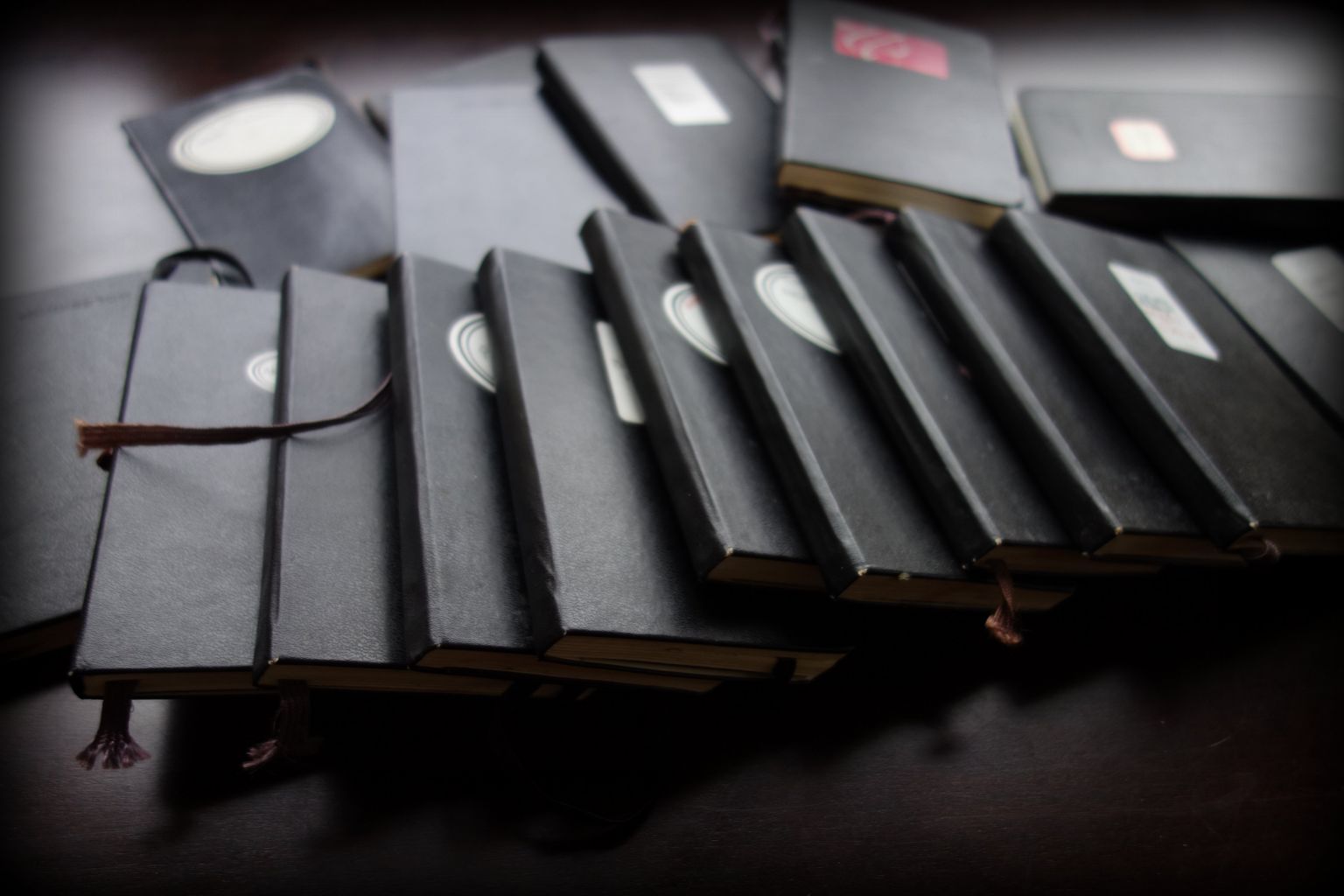 Most of my sketches are done while we sit in restaurants and their detail and scale depends on the view and how long we have to wait. Here it must have taken a little while for the meal to arrive, but there was a good view across Argyle Street. 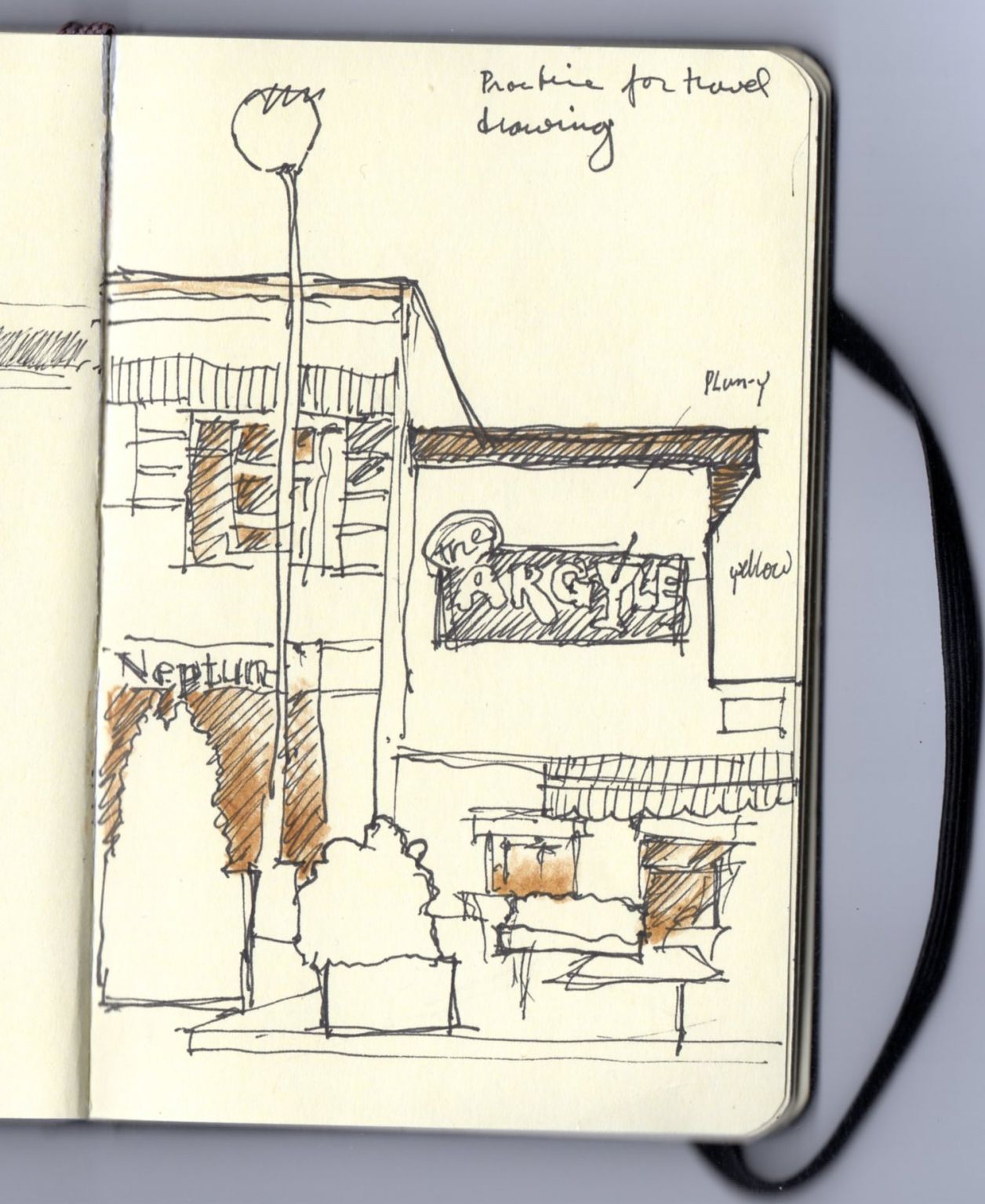 The little sketches are  scattered among often ambiguous or illegible notes. Here is the apartment building across from Jane’s on the Commons. 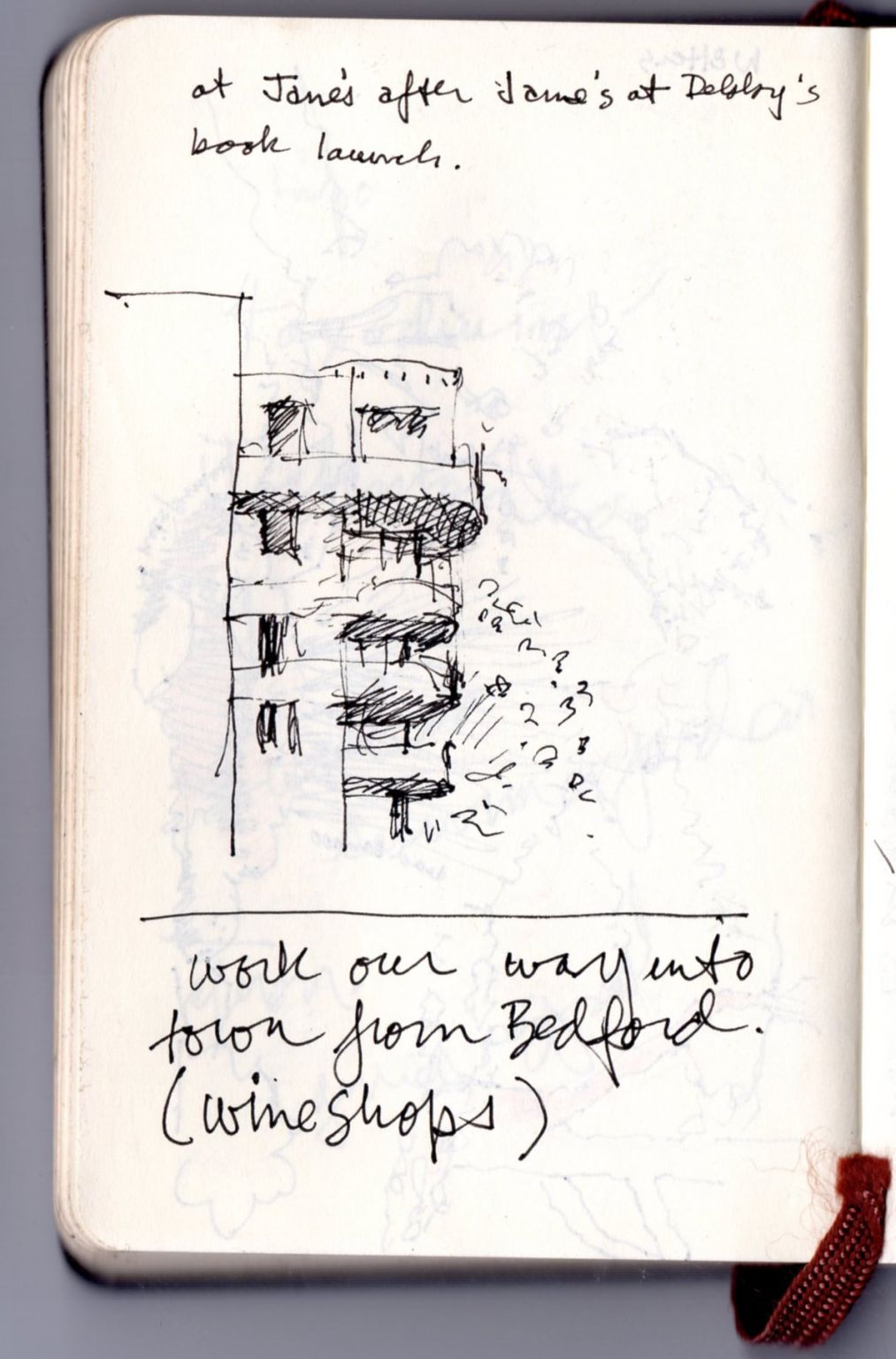 At countless city planning public consultations I would sketch the carpet pattern or the hotel ballroom light fixtures. This might be an attempt to draw Andy Fillmore with a big PowerPoint arrow and the stepped building design that developers love to resist. 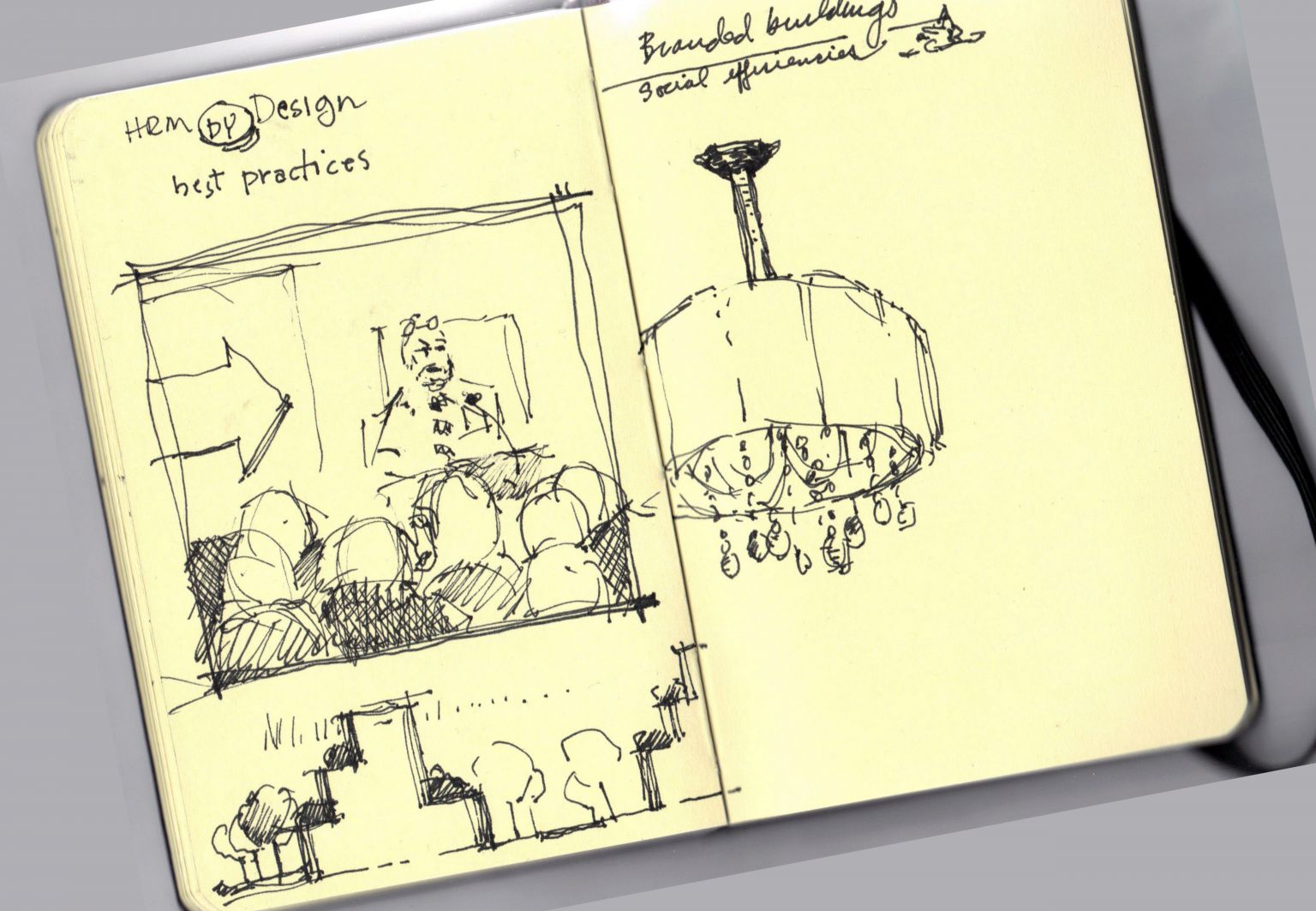 My most sustained bouts of sketching happen while we are travelling when more is new and there are moments of repose. In Brazil, a few years ago, we noticed that bottles of beer came to the table in insulated jackets covered with advertising. I started drawing these and began hoping  a new design would appear with each new beer.

Visiting Sheila’s relatives in Arizona, I celebrated little moments that would otherwise fade from memory. 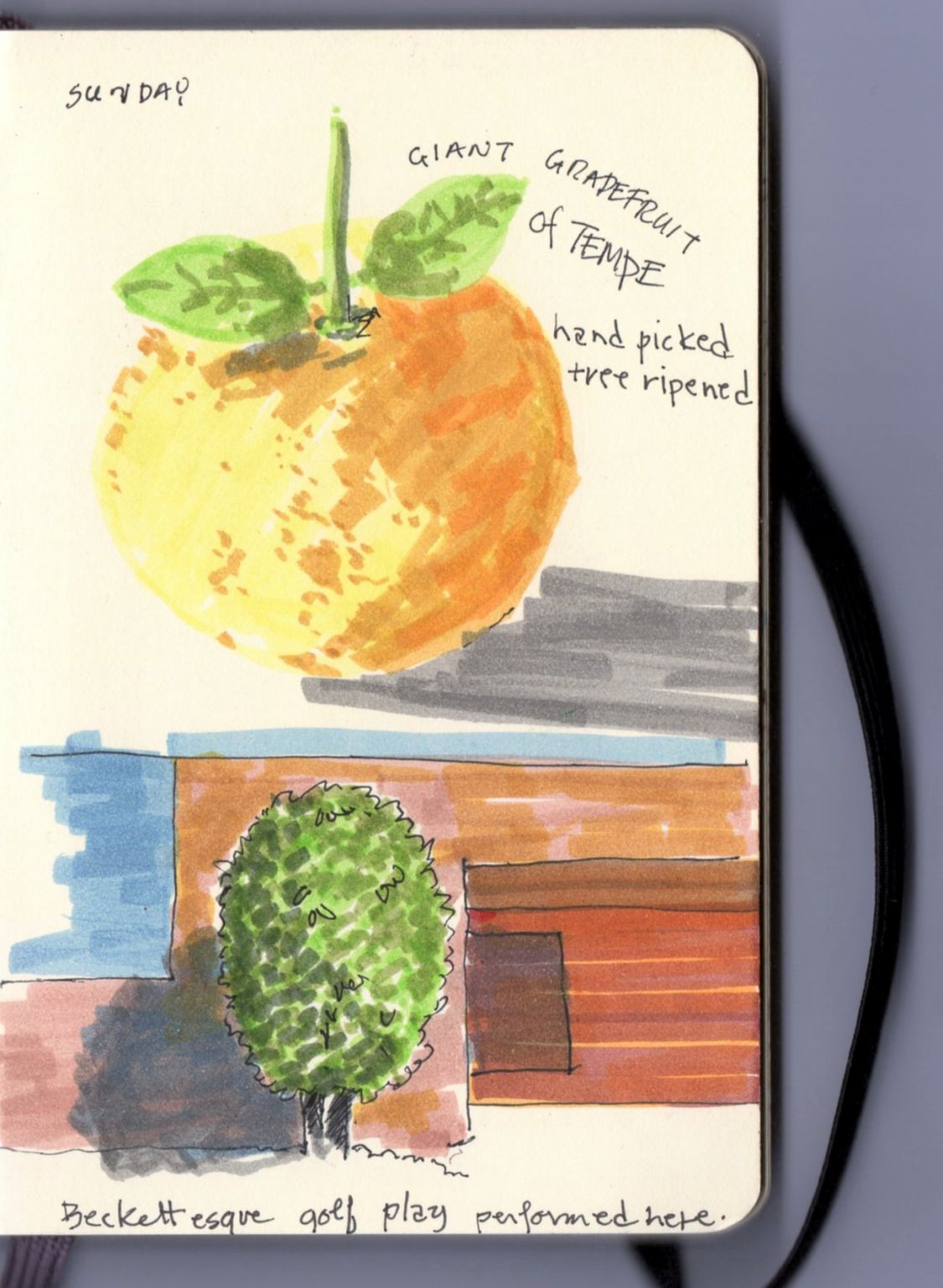 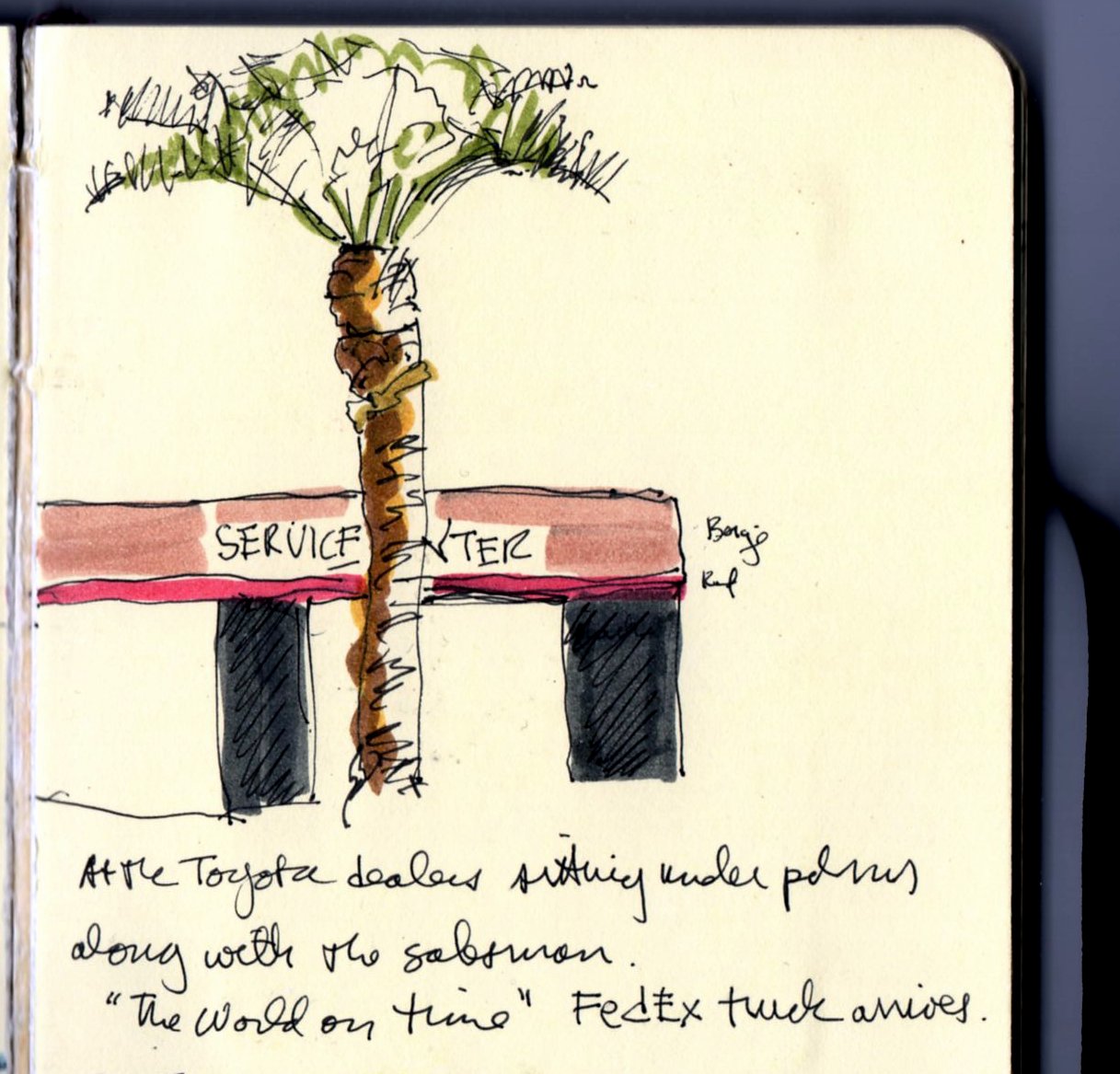 It’s sad to realize that since I’ve gotten a phone camera there is no longer the same impetus to draw each course of a fine meal in a French restaurant, and the label from the bottle of wine too! 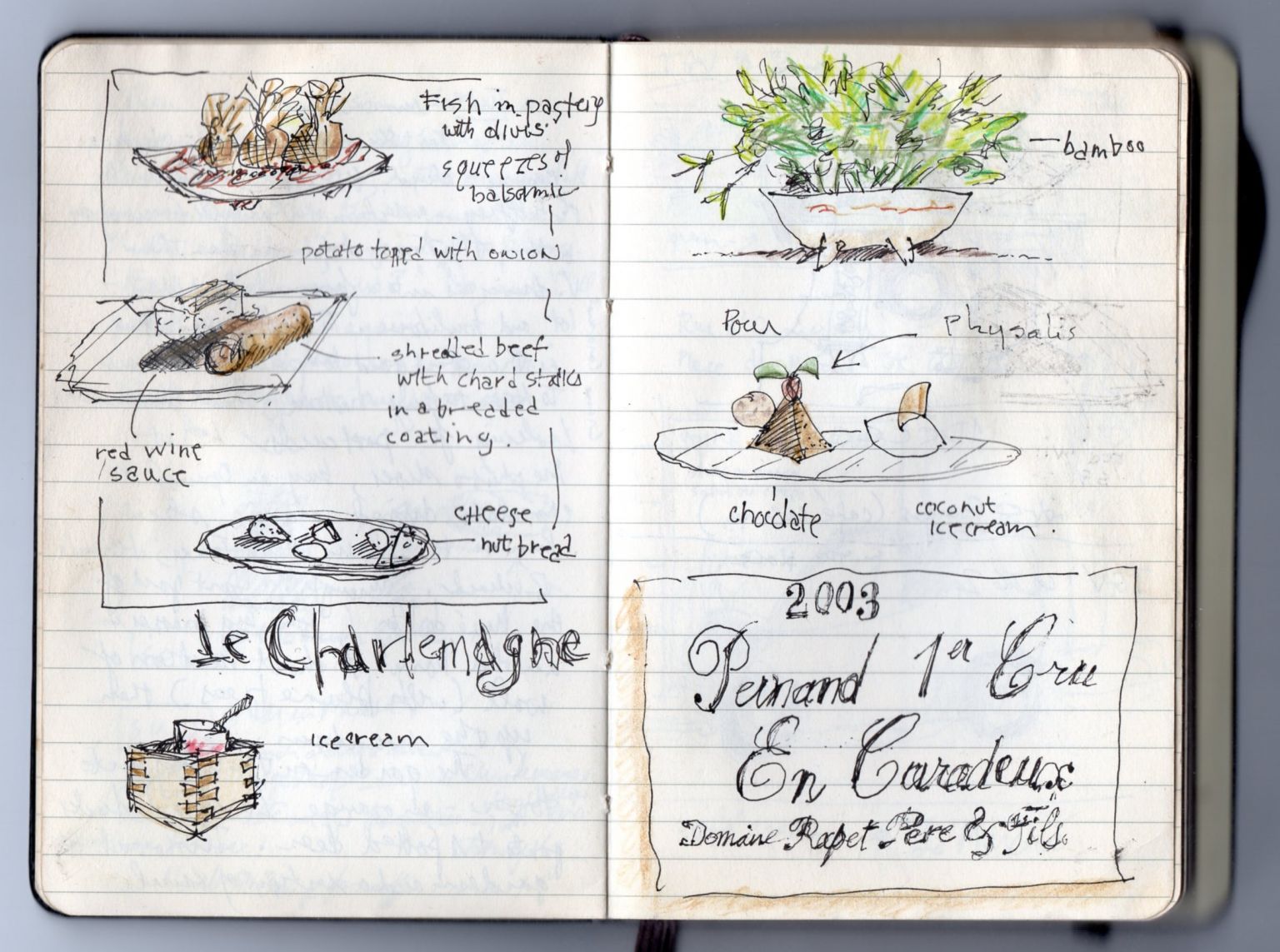 So in the new year, try drawing little bits of where you are. And don’t be like “I can’t draw.”  You are not trying to be Michelangelo, but just keeping a little visual diary. The act of drawing helps you remember the moment and really see your surroundings. You could draw on your phone but a little notebook and a nice pen will just make the experience that much better. 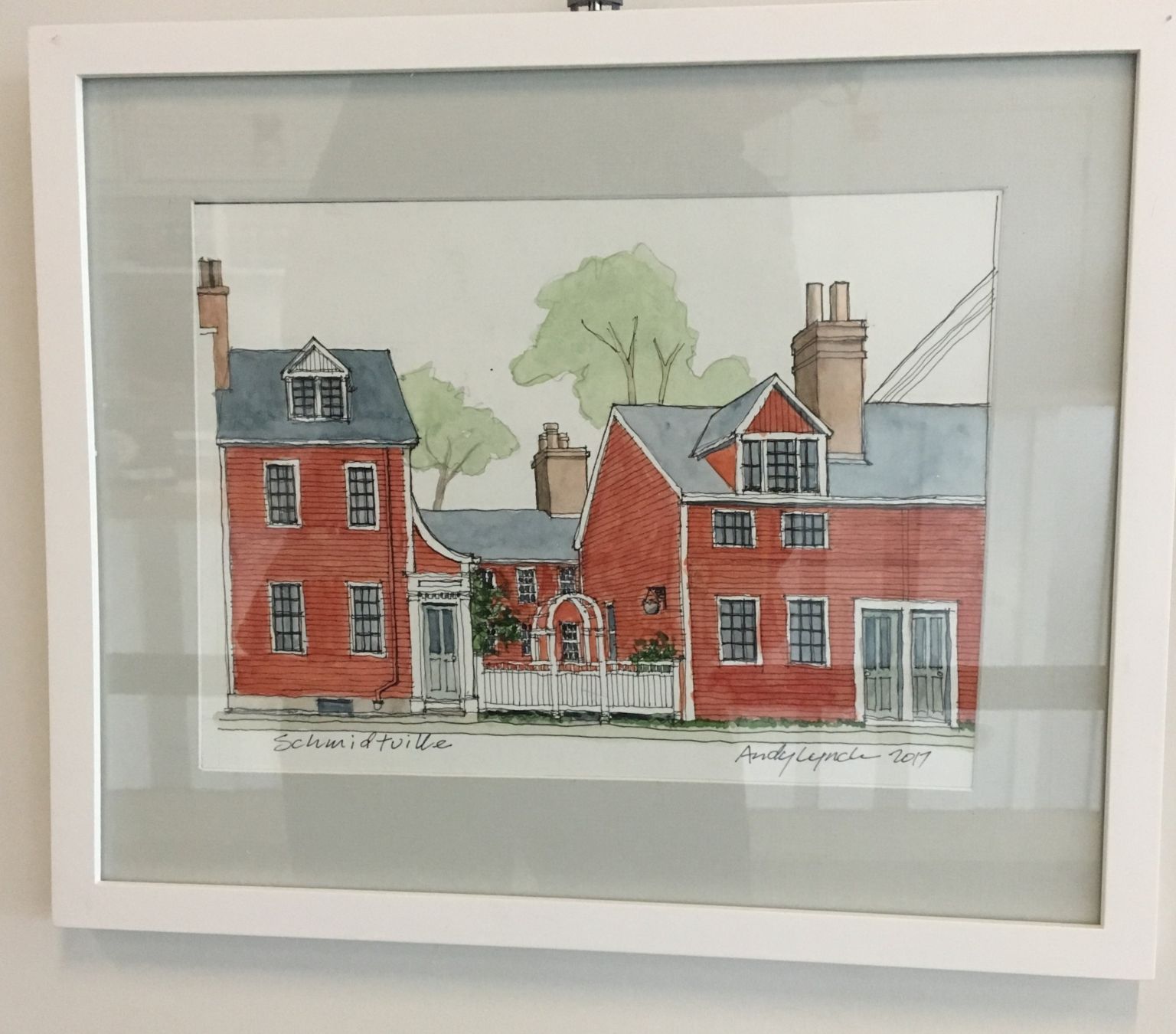 And when we went to the window there they were, peeking  through the trees and roofs. 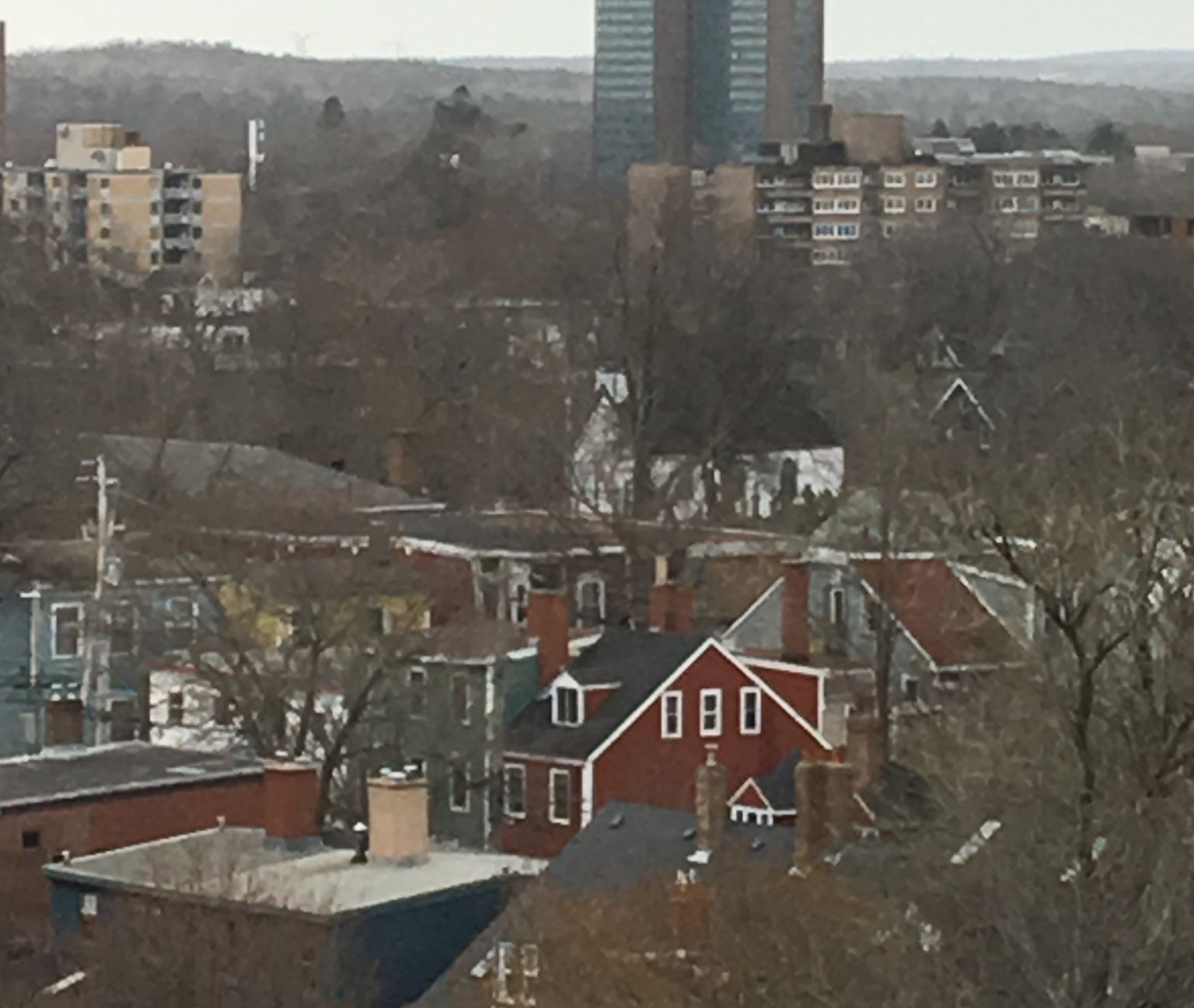 With Every Christmas Card I Write