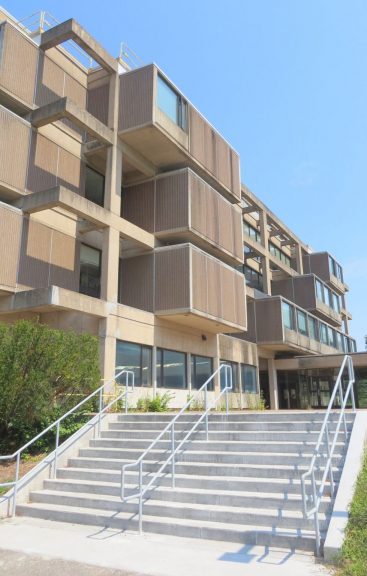 Do you hate the big concrete buildings of the 1960s and 70s, that were popular with governments and universities? Don’t be shy, probably most folks are not fond of these often dreary buildings, many suffering from 50 years without love (or maintenance).

Recently I’ve become comfortable with this style, often known as Brutalist, and can discern charm and whimsy in the most thoughtful examples. A few years ago I noticed one that appealed to me immediately, the 1972 Huggins Science Hall on the Acadia University Campus in Wolfville. In August 2013 I spent a few minutes snapping photos. The main facade combines order and restlessness. A concrete grid projects from the wall and appears to support a number of pods that randomly pop out of the building. The pods look a bit like shipping containers, but in 1972 our dreams of living in a container did not yet exist (the Halterm container port had opened just three years before). A deep channel between the floor levels gives the illusion that the building is a collection of stacked elements. The light was perfect for my snapshots. Depending on your frame of mind, you will cheer or weep, because last fall Acadia announced the Huggins would be renovated. Early concept illustrations show the concrete wrapped with more contemporary surfaces. This new shell allows the building to be heated and cooled in a more environmentally-sound fashion. I’ll keep an open mind on the renovations but I’m glad to have had a good look at the original design before it gets covered up. You might want to take a look too.