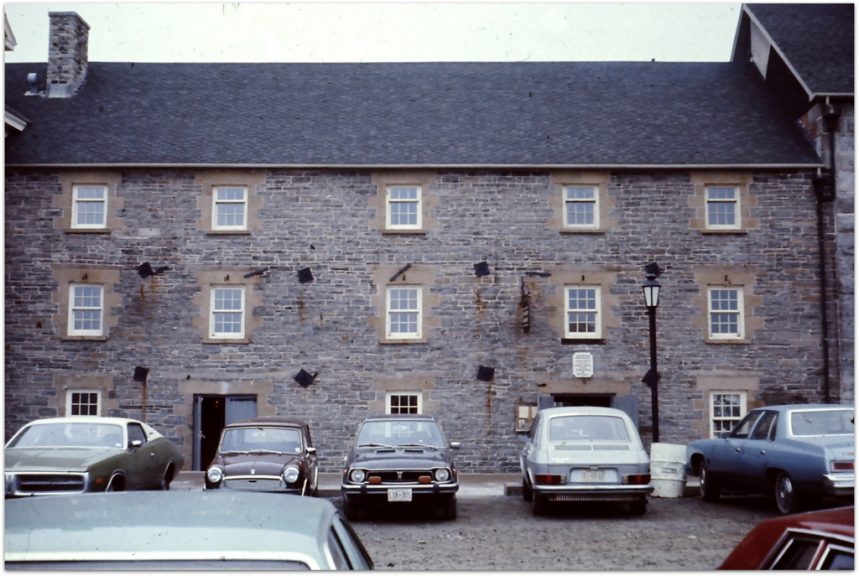 Have you been able to process all the development proposals in Halifax that are trying to sneak into the system before the Centre Plan is finalized? One caught my attention because it was actually proposing to save an old house (and build a whole bunch of apartments behind it). The planners for the project said the house was a candidate for “adaptive reuse” and that made me go all nostalgic for the 70s and 80s when that phrase often rolled off our innocent tongues. House to be saved faces South Street and the new block behind it would stretch through to Harvey Street.

So I searched my photos for examples of adaptive reuse back in the day. The classic example is Historic Properties where in the early 70s derelict warehouses were converted to retail and restaurants and offices. In those kinder gentler times folks would agonize over the appropriateness of filling in the openings for large loading doors with sheets of glass. Photo 1977. Notice the Roots, one of the first branches. It sold shoes and leather goods. Photo 1977. Notice the corner of the not lamented neon sign on the Morse’s Teas Building.

In the days before the hotel was constructed next to Historic Properties, there was very convenient parking when we visited the Middle Deck on Fridays and mingled with the downtown types.

The east side of the Granville Mall was adapted at about the same time as Historic Properties. Heritage Trust had published a useful book in 1970 called A Sense of Place that encouraged the reuse of the mostly empty block.  They made some suggestions about how the buildings could be re-used, with retail on the lower floors and apartments above. Particularly attractive was the idea for top floor apartments with small interior courtyards. Maybe the time has finally come for this modernist, hipster vision. In the interior passageway that connected Granville to Hollis Street were these wonderful cast iron columns that are no longer in a public space. This was the time when we first embraced exposed brick and massive wooden posts and beams. It was not until the 1980s that Keith’s Brewery property was re-purposed with its wonderful covered courtyard. Besides these large adaptive reuse projects there were smaller interventions. A good example was the 1830s Henry House that became a fine dining restaurant about 1970. The original basement kitchen was converted into a less formal space called the Stone Jug. Many buildings can and should evolve with the times. Built as a fire station, this Grafton Street building  was a car repair shop when I took a photo in the late 1970s. Later it because a fancy clothing store, then a restaurant or two and now is the Stubborn Goat gastropub. A particularly sensitive conversion of a residence into a commercial building was this wing of Mills Brothers on Birmingham Street. It is possible to maintain the spirit and dignity of an old building while transitioning it to a new function. Many institutional buildings are good candidates for adaptive reuse. The St Mary’s schools did not change much on the outside when they became the home for uses like a model shop or a record store or the Art Bank Collection, even a cutting edge design firm. The 1860s Post Office became the headquarters of the RCMP and now is the Art Gallery of Nova Scotia. AGNS wants desperately to leave but I hope they find an appropriate tenant before they go. Photo late 1970s. The street is Cheapside that disappeared and the space is now the underground temporary exhibit gallery and the sculpture plaza at ground level.

Many churches have become redundant and are often a challenge to repurpose. This, on Morris at Queen, was built as an Anglican chapel (I believe) and for years it was the home of the Greek Orthodox congregation (as it was in this photo). Now it is condos. We do have some good contemporary examples of repurposed buildings, like the Seaport Market or Pier 21. The examples I’ve shown are from 30 or 40 years ago. Since then the economics and perhaps our will has changed. It was hopeful to hear “adaptive reuse” again and maybe it will continue to resonate as a concept with each new generation. Photo probably from the Public Archives of NS. I saw it on Twitter.