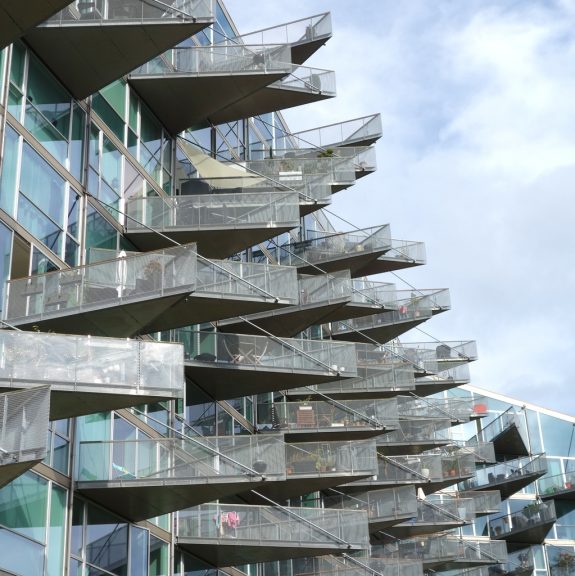 Recently we attended the Project Kick-Off event for the Cogswell Street Interchange redevelopment. The redundant, late 1960s interchange represents a colossal failure in planning, so folks are very engaged in getting it right this time around (there will not be a third chance). The good news we were told is “everybody wants it!”

You can take a “3D virtual tour” of how the Cogswell area will be transformed. This reminded me of another fresh start we visited earlier in the fall: Østerbro, a new community on the edge of Copenhagen, Denmark. We went to see the architecture and sample the urban planning, both of which are not universally loved.

Østerbro has wonderful transportation links: the development is strung along a new metro line. There is a regional train station, of course it is bicycle friendly, and there are links to the major highway system. Cogswell will have to accommodate a huge quantity of motor vehicle traffic passing through.

The metro line in Østerbro is elevated. Here is a view in the station across from the largest shopping mall in Scandinavia, on the left. Hard to make this look cozy. 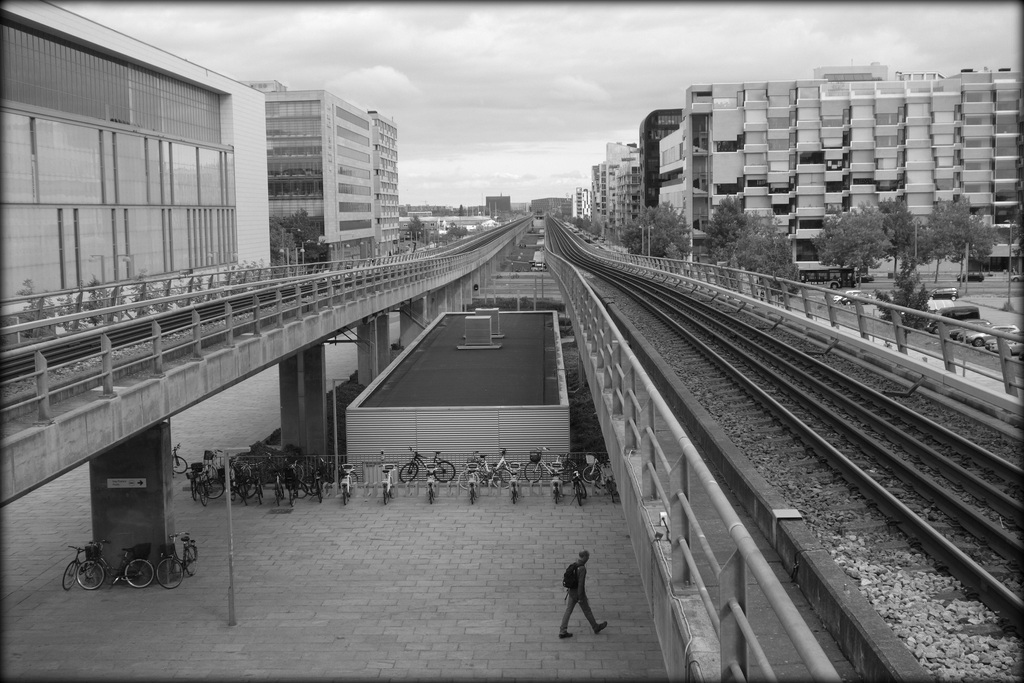 The elevated line means the metro is not a barrier at ground level. Remember the idea of putting Barrington Street in an underpass beneath the new Cogswell development? 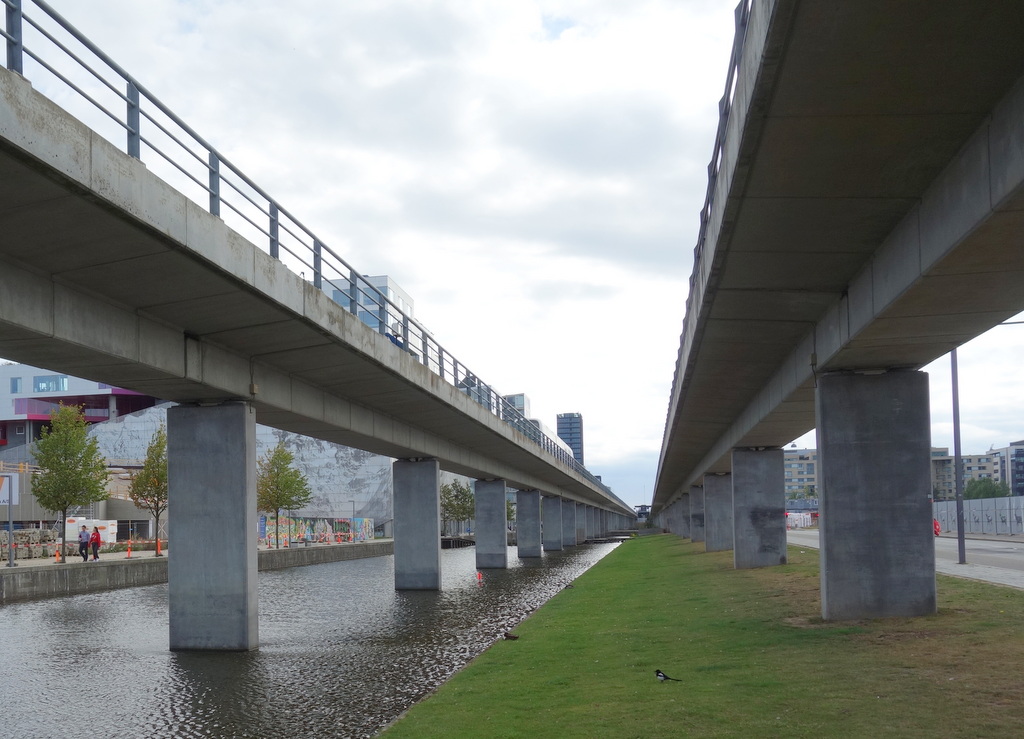 We visited Østerbro on a dreary Saturday and saw relatively few cars. On the major through road there did not appear to be traffic lights. Cars just stopped at crosswalks. Try that on Barrington Street. 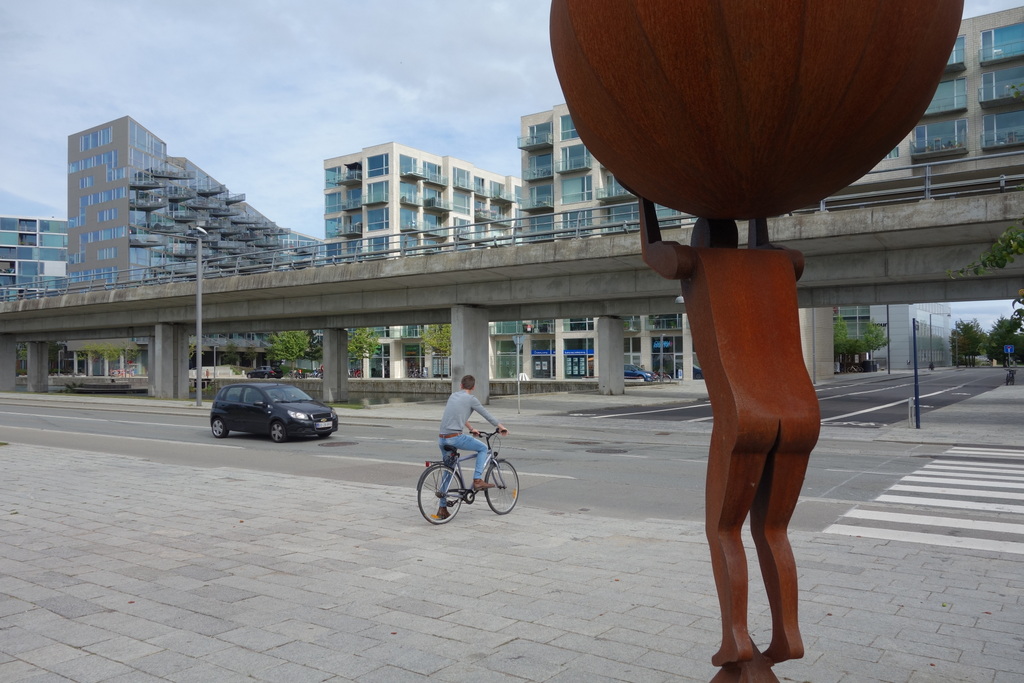 Some sections of Østerbro had been finished quite recently, while in between large blocks were under construction or still vacant. Sometimes it felt like you had stepped into an architectural rendering or a movie set. Unlike downtown Copenhagen there was little street life, except for us. 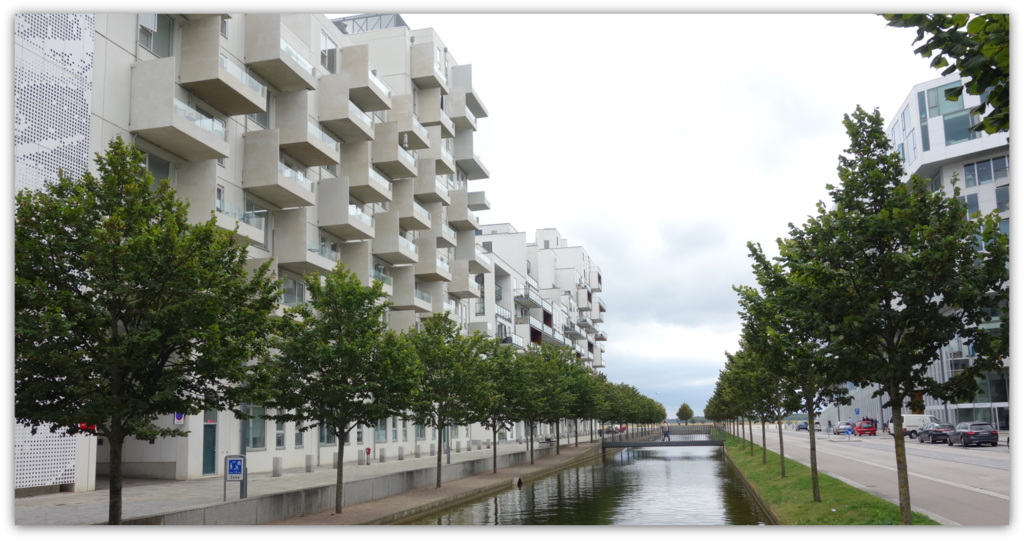 Land was very expensive so developers of the residential projects often commissioned distinctive buildings that would attract attention. 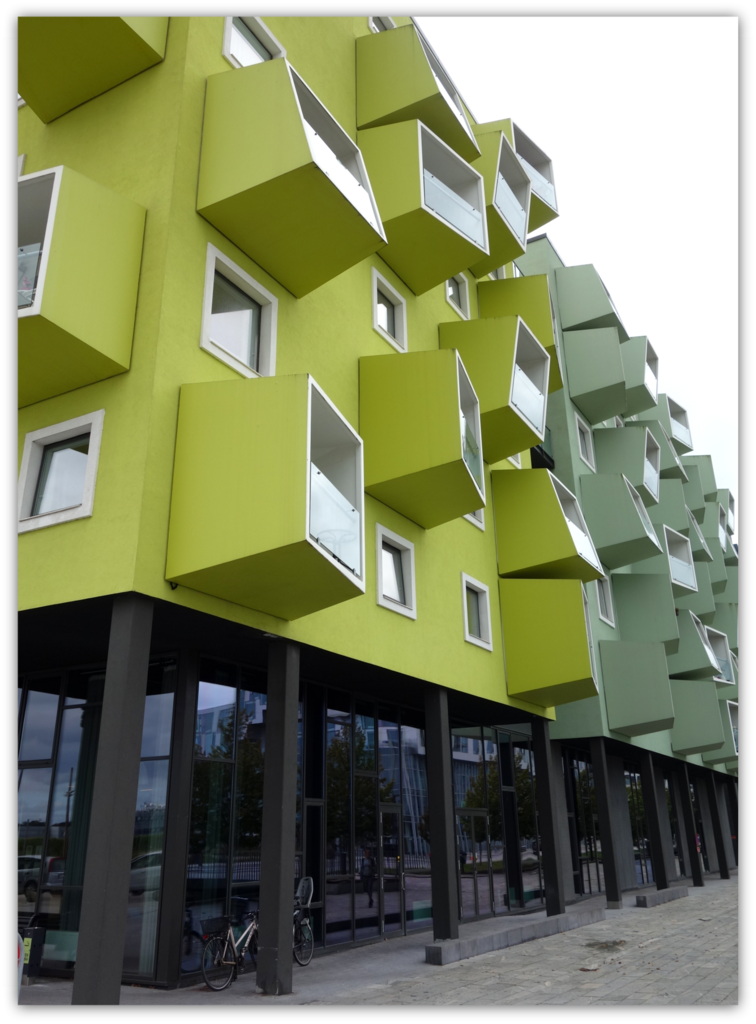 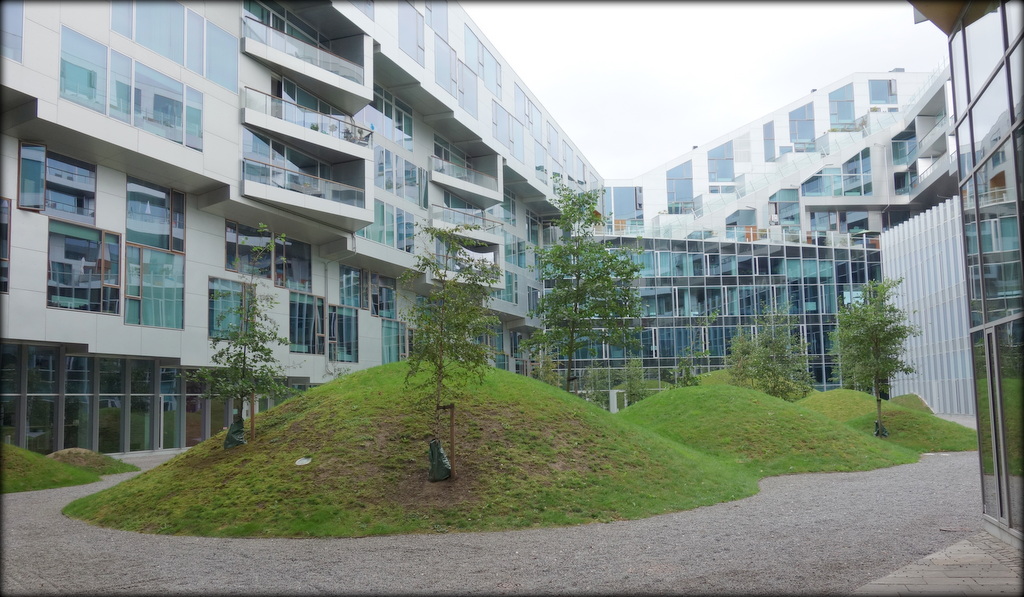 One of the controversial aspects of Østerbro is its encroachment on a wetland natural area. To photograph these two panoramas I just turned around. The hard edge between the development and the natural parkland is breathtaking. 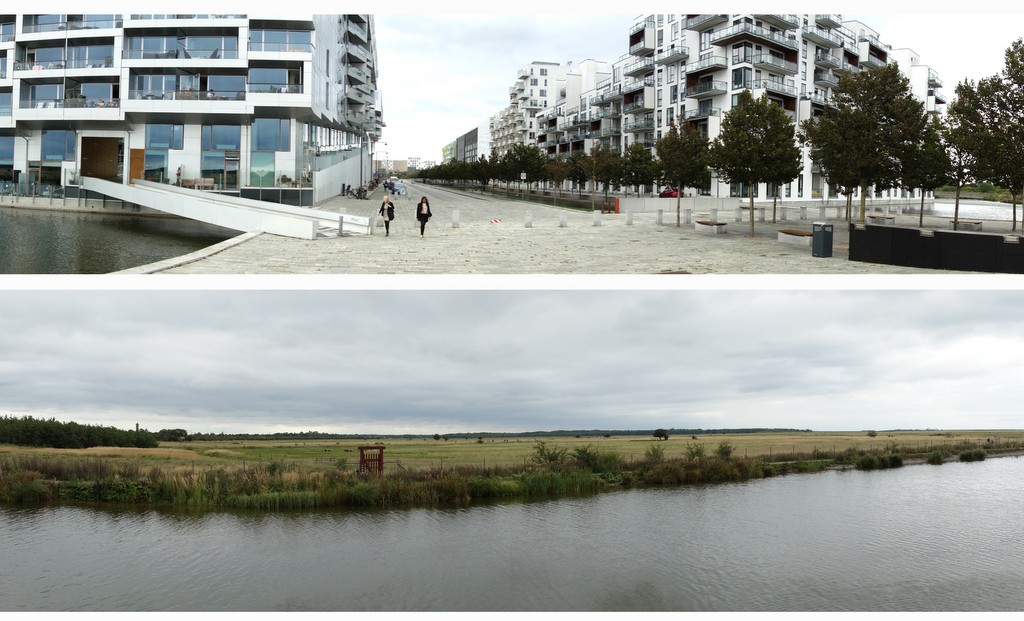 Roads among the apartment buildings are narrow and we saw no surface parking lots. Within a row of apartments was this wonderful parking garage with a perforated metal cladding that created a pixilated image of a parking lot. Joy. 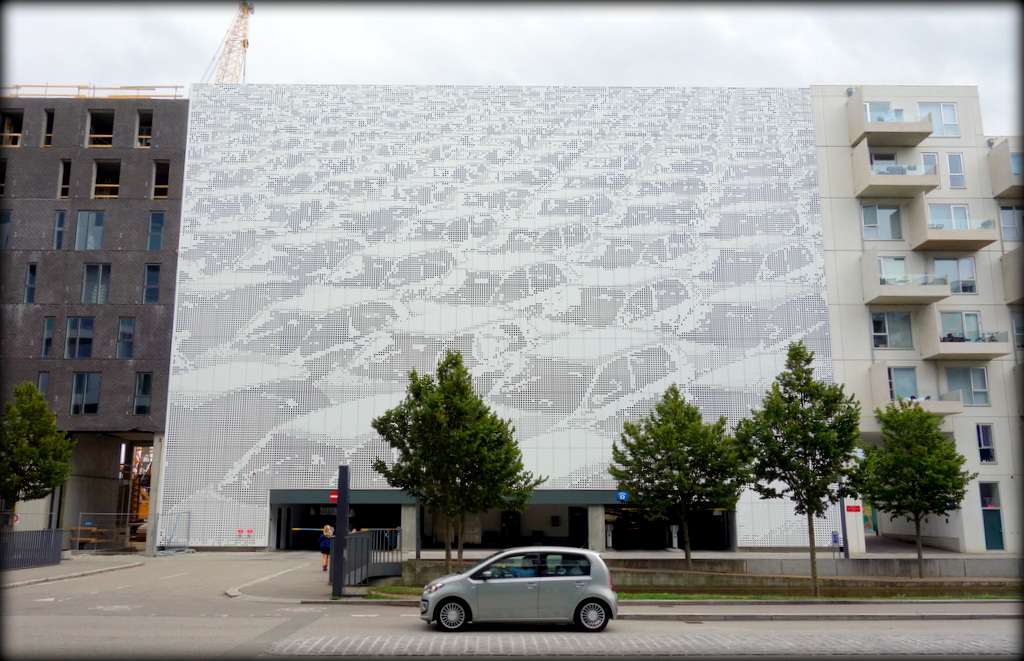 A number of the most well-known buildings in Østerbro were designed by the local architecture firm BIG, the Bjarke Ingels Group. This example has pointy balconies . . . 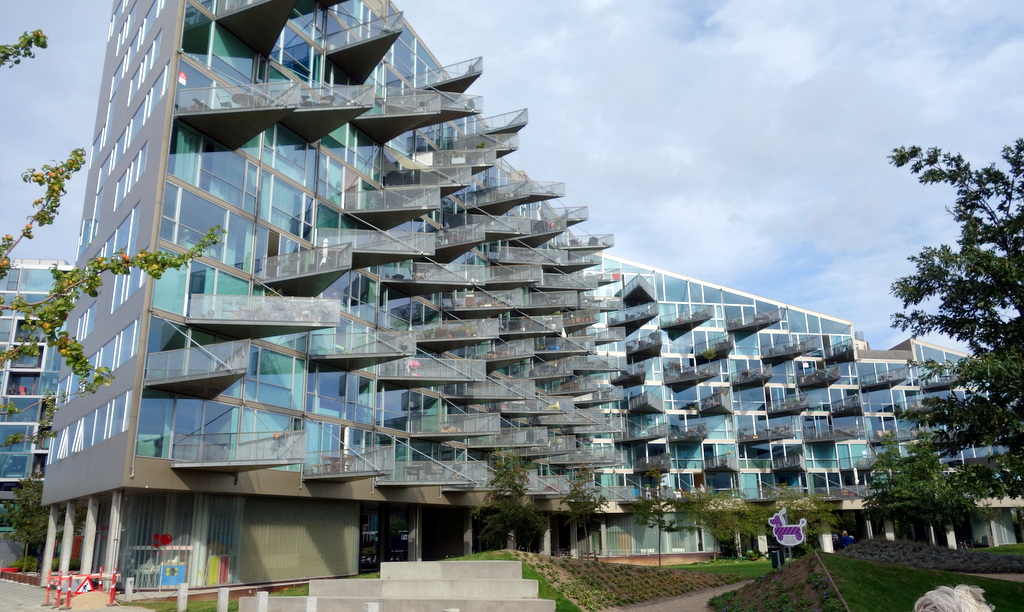 another has rooftop gardens. 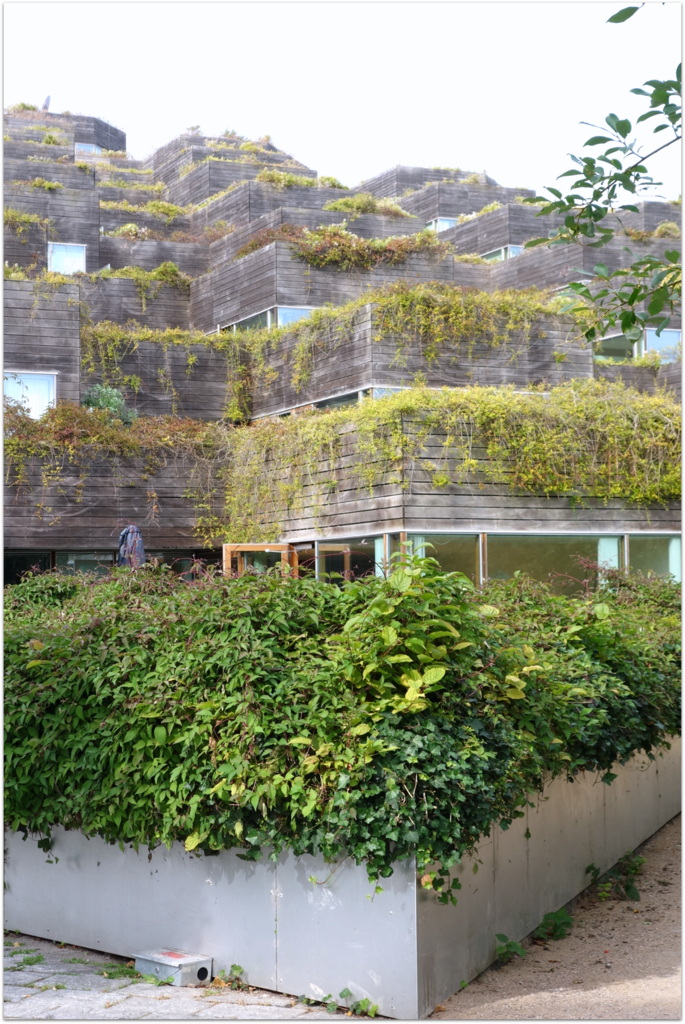 It was not obvious that Østerbro was a successful community, but it is still young and worth a visit, and a complete contrast to the narrow, winding, picturesque streets of old Copenhagen. 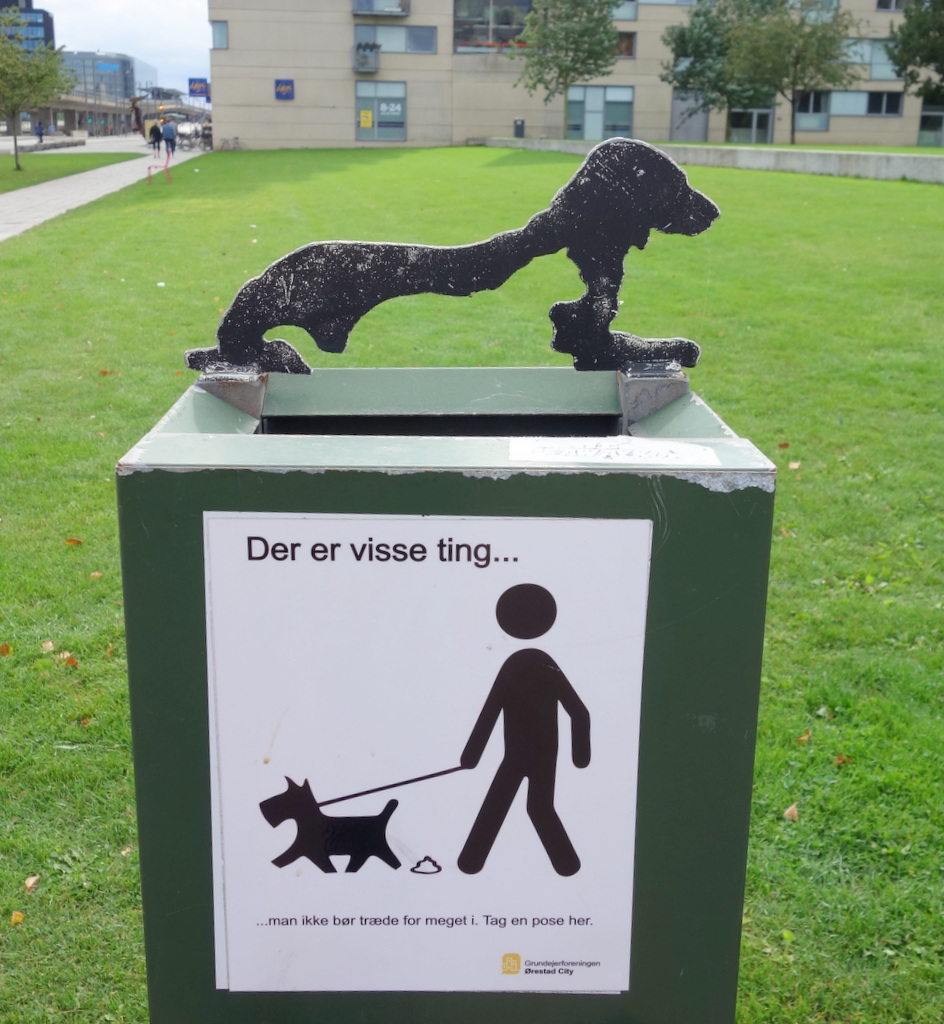 My wish for the Cogswell project is that the architecture is interesting and thoughtful enough that Haligonians and visitors will be excited (in a good way). Wouldn’t we love to see the development as clickbait on a BuzzFeed 10 best list? That would be real success!

Halifax, of course, has its own piece of clickbait architecture with Copenhagen credentials, the Central Library, designed in collaboration with the Danish architecture firm Schmidt Hammer Lassen.

And because the world is small here is an enchanting vacation moment. We had returned a rented car at the Copenhagen airport and were taking the metro back into town. Sitting opposite us was a couple with Air Canada wrapping on their luggage and a MEC knapsack. The man looked familiar. Turns out it was Morten Schmidt, the architect for our library, we had seen him several times at the public consultations.

Schmidt had just visited Halifax and saw the library for the first time since it was finished. The real reason he was in Canada was to accept a Governor General’s Medal for Architecture in Ottawa with George Cotaras from Fowler Bauld and Mitchell, the local architecture partners.

Schmidt reached into his knapsack and pulled out the medal. We asked if we could take his picture. Sweet. 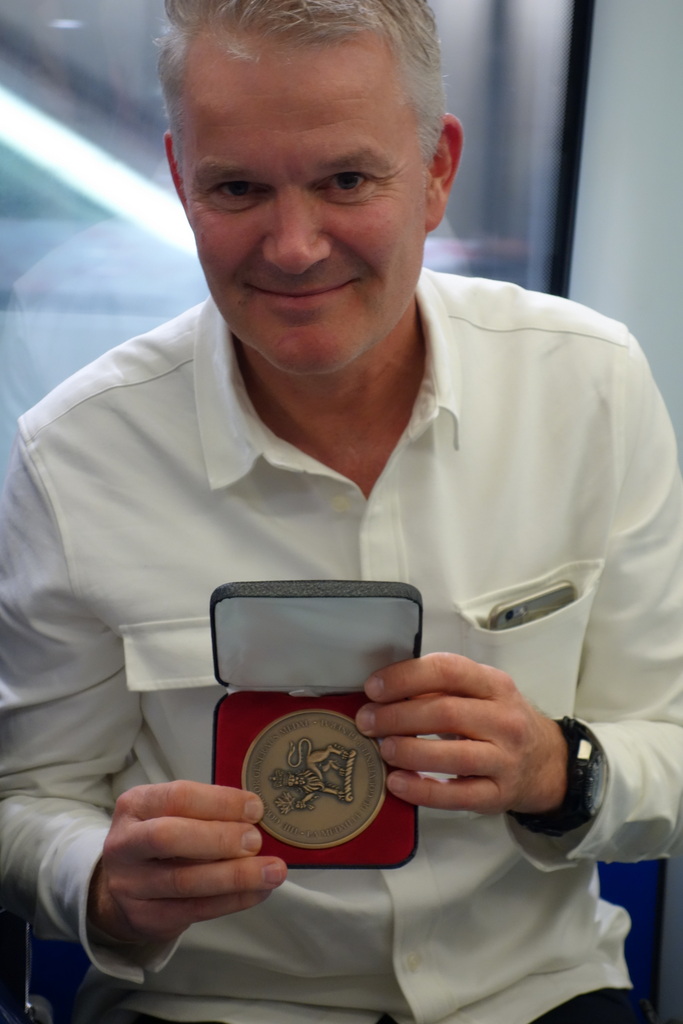