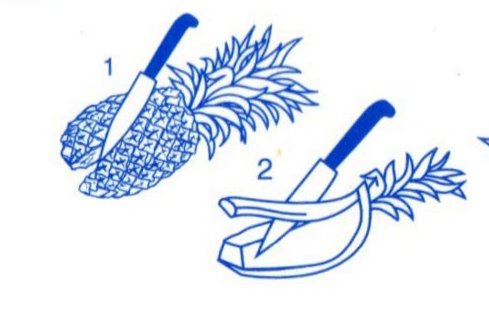 I have a fondness for step by step instructions told with simple illustrations. For example, over the last 30 or 40 years I’ve paid particular attention to the little diagrams attached to fresh pineapples. Let me show you a few examples I’ve saved.

This label was on a pineapple I prepared a couple of weeks ago and demonstrates how illustrations have progressed over the years. The drawings and layout are particularly refined but the best feature is the spiky top shooting into space. A unique touch, in my experience. Compare that to a diagram I saved in about 1980. The first ambiguous illustration suggests you start by killing the struggling pineapple. There is also a second preparation option where the pineapple is made into a festive bowl. I’ve never seen this attempted. By the later 80s the illustrations above were redrawn in a much more engaging style. That first illustration is still problematic.

Del Monte once tried tightly cropped closeup views. Somehow this made pineapple prep look too clinical and not much fun. It is fun, isn’t it? Chiquita perhaps did it best by reducing the number of illustrations to three, and recognizing that not all people understand visual information and providing some written cues as well. Another group of instruction diagrams to acknowledge and celebrate are on the packaging for disposable chopsticks. I doubt if anyone really learns how to use chopsticks following these illustrations, but they do encourage you to practice before the sweet and sour anything arrives.

My heart leapt with joy a couple of years ago when we grabbed some sushi in the Miami Airport. At Sushi Maki, their chopstick packaging replaced the how to use illustrations with “Fun with Chopsticks” suggestions. Sublime. Don’t you love being ambushed by creativity! The other day I was going all Marie Kondo in the bedroom and rediscovered a couple of how to instructions that have lived at the bottom of a drawer for years. One was a birthday card with instructions on how to fold a cat. The other was impossible instructions on how to tie a bow tie. My mother would have turned this up in the 1960s and had, not very helpfully, written “practice makes perfect” on the bottom.

Yes Marie, I thanked them and they have moved on to a new life.