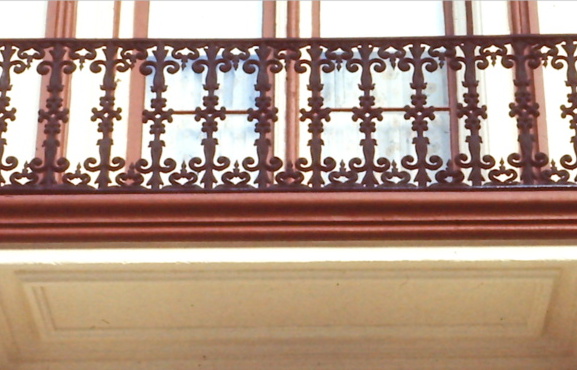 It’s hard to keep up with all the big changes happening in the old North End of Halifax. I’m more of a small change kinda guy, so I’m offering a little visual collection of decorative ironwork found north of Citadel Hill. Many of these confections have disappeared since I started taking photos in the 1970s and some remain for you to enjoy today.

For example, we’ve lost a fine cast iron fence that defended a tiny yard in front of a Brunswick Street house. Most of our Nova Scotian-made, 19th-century fences were not this decorative so maybe it was imported. This curlicue design on Gottingen Street was a favourite of mine. It was in front of Victoria Hall (the Old Ladies Home), and has been missing for years. The visual rhythm it provided was a gift to the street, and the spikes on the top discouraged layabouts from having a seat. (The previous fence also had spikes; what our favourite podcast, 99% Invisible , calls “hostile architecture” or “unpleasant design”.) Imagine my excitement about 1975 to discover a remarkable survivor on Barrington Street, just north of the MacDonald Bridge. There, on one of the busiest streets in town, were some sections of iron railing, the last remnants of the Richmond Train Station. The railings were on top of a retaining wall built beside the Terminal, that was famously destroyed in the 1917 Explosion. A post-Explosion photo, in the Public Archives of NS collection, shows the railing and the giant train shed, with its roof collapsed. The last remaining section of this railing was removed in the 1980s. Oh well.

A pointy little railing was beside St George’s Round Church on Brunswick Street and disappeared, I believe, about the time the church burned down. The balcony railing (detail photo in header) on the St Patrick’s Convent on Brunswick survives, but the stair rails have gone since this photo was taken in the 70s. It was  built in 1863 as the residence of merchant John Conrad West. A photo in the Public Archives of Nova Scotia collection shows the house once had iron cresting along the roof line and railings along the sidewalk. Buildings often shed their original ironwork over time and we become accustomed to their diminished complexity. Lastly, some survivors you can still see on Brunswick Street. These cast iron balusters are at the entrance to a very pretty Italianate-style house. On my rambles looking for iron, forty years ago, I always carried a magnet to determine if heavily painted elements like these were really iron. Artistic folks have lived in the house for a long time.