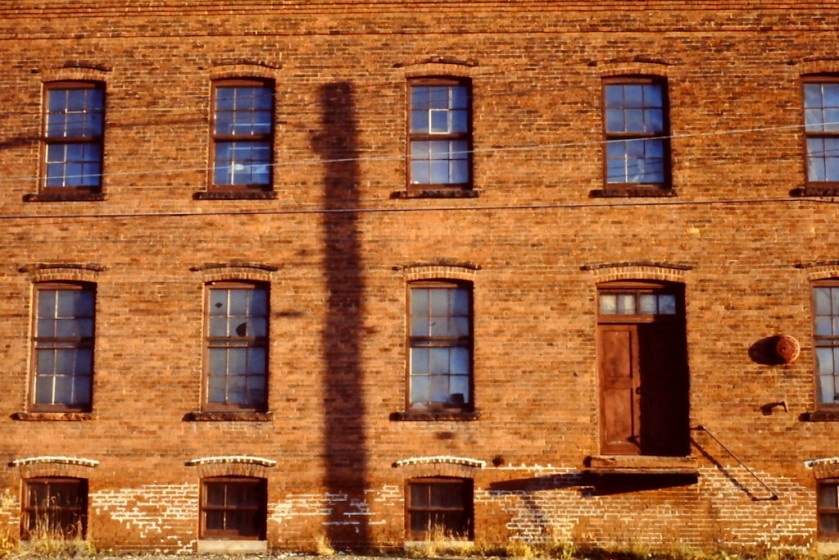 Amherst has had a long, long conversation about the future of an old sandstone Bank of Montreal building on their main street. Future has finally turned into past: you can watch it being demolished on YouTube.

Talk of Amherst’s rich built heritage sent me looking for some slides I took on a spring morning in 1983. I was attending a conference in town and got up early to take some photos. They were not great shots because the sun was bright and the shadows were dark. But they do sample a moment 33 years ago.

On the right is the old Bank of Montreal Building that was just demolished. Next to it is the Dominion Public Building of 1935. To the far left is the wonderful First Baptist Church built in 1895. I’ve noticed it proudly open to the public in summers and it is well worth a visit. The architect for the church was Harry Mott who also designed the Lunenburg Academy we all love so much. Further down this side of Victoria Street are the 1888 Court House and the 1887 Post Office. Here is an old post card that gives you a better idea of the astonishing Post Office designed by the architect of the original Parliament Buildings in Ottawa. On the other side of Victoria St is the Beaux-Art style Bank of Nova Scotia built about 1907. What a fine collection of public buildings of different styles. You can understand why the loss of the Bank of Montreal building was mourned.

Across a small park from the robust stone buildings of Victoria Street is an Anglican church of a generation or two earlier. Christ Church was built in 1846 in a no-nonsense Gothic style. The red brick is uncommon for a church of this period in Nova Scotia. Off in a residential area is the substantial, 1911 West Highland School designed by Leslie Fairn, who was also the architect for the Dominion Public Building. All these grand buildings are a legacy of Amherst’s prosperity as a major manufacturing centre, strategically located on the trans-Canada rail line. The sandstone train station built in 1908 was one of the largest in the province. In the late 19th century the community was known as “Busy Amherst” because of all the industries manufacturing things as varied as pianos, steam engines and luggage. I was enchanted by old factory buildings but no longer recall what was what. Amherst has been aware of the wonders of their architectural heritage for a long time and has had some useful walking tour brochures that make visiting very easy. I’ve not shown any of the beautiful housing the town has to offer so you’ll just have to stop and look for yourself. Why are you always in such a hurry to get to Moncton anyway? On my morning ramble I took a couple of snaps of an old portable steam boiler. We talk often about boilerplate documents (“a unit of writing that can be used over and over without change). Here is the real thing: rusting, riveted, boilerplate.